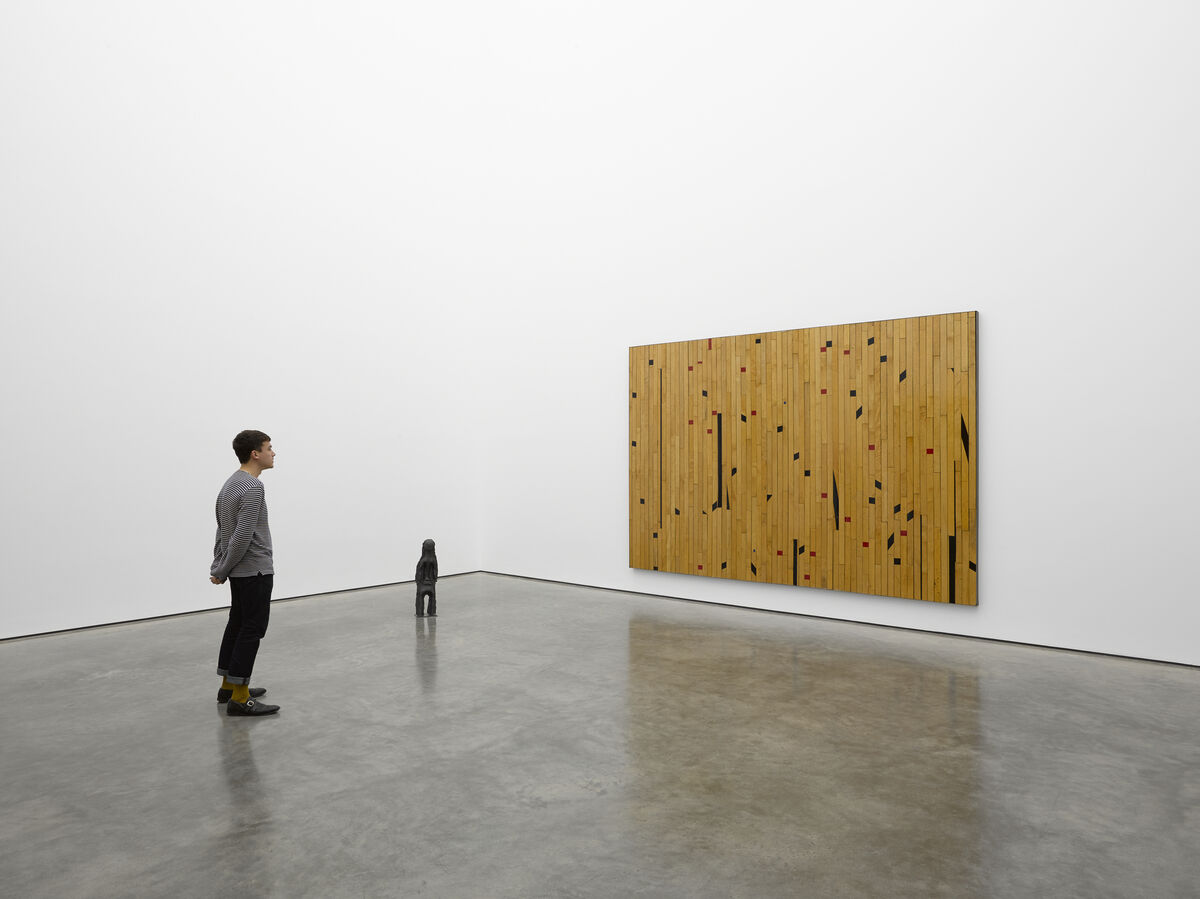 It is possible to see in
Theaster Gates
’s Ground Rules (Free throw possibility) (2014), which hangs in his newly opened exhibition at White Cube, references to both Piet Mondrian’s Broadway Boogie Woogie (1943) and the pattern painted on the school basketball court that inspired the work. The materials, floorboards and all, are a testament to Gates’s frustration at the dismantling of Chicago’s municipal education system, and the form addresses modernist art history. 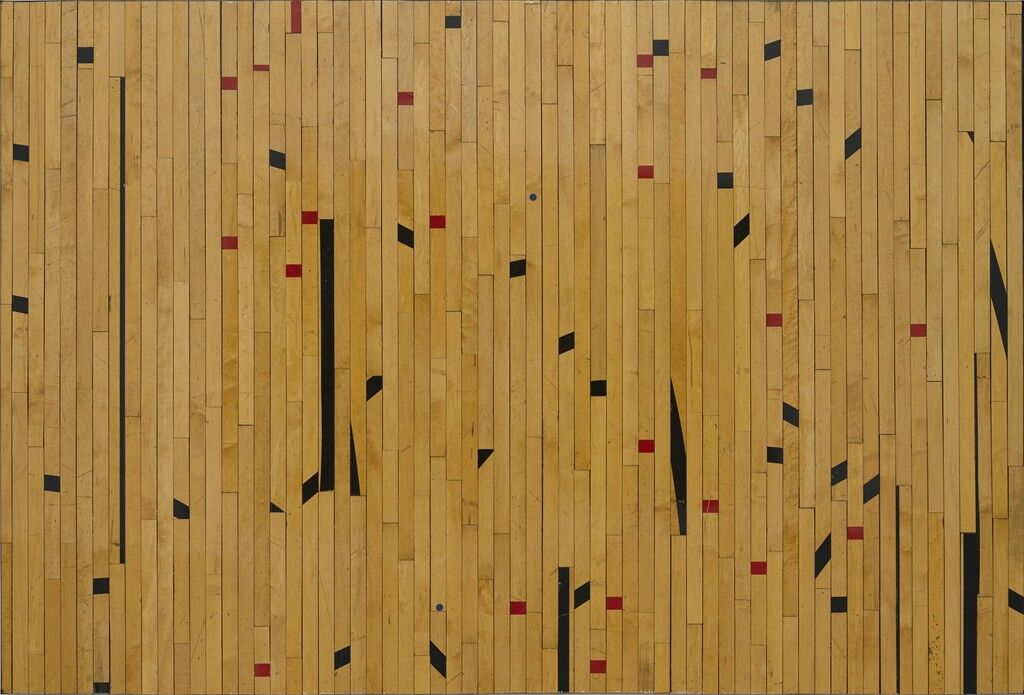 Theaster Gates
Ground Rules (Free throw possibility), 2014
White Cube
In the next room, a series of atmospheric black paintings executed in wood, rubber, felt, and tar recall Ad Reinhardt, Mark Rothko, and Kazimir Malevich while simultaneously paying homage to Gates’s father’s profession as a roofer. They are typical of the way that the artist interweaves personal and cultural histories, freighting objects with readings that extend beyond the gallery. As Gates explained during a walkthrough at White Cube, the show’s title, “Freedom of Assembly,” is as much about the freedom to combine his own interests and experiences with the tools, references, and processes of high art as it is a reminder to the U.S. government of its constitutional obligations.
As such, Gates inserts stories into works that at first glance appear austerely formalist. The narrative elements are further heightened by the small sculpted figures that populate the show, crowding around the works, observing from above, lurking in corners. We might read them as self-portraits—little avatars of Gates that seek to relive the histories that have shaped him.
I met with the charming, eloquent, and charismatic artist on the morning of his show’s opening to discuss how, with “Freedom of Assembly,” he has set aside his practice as an urban planner, performer, and musician to focus on the creation of physical objects.
Ben Eastham: The title “Freedom of Assembly” feels this morning—in the wake of last night’s riots in Baltimore—like an explicitly political statement. Yet the show doesn’t feel didactic, preachy, or admonitory. The political elements seem instead to be expressed through your choice of materials and the processes by which you work.
Theaster Gates: I haven’t lost my interest in the city. For this exhibition, I just thought, “What would happen if I were to muffle my beliefs, my views, my opinions? Instead, I’ll unmuffle another impulse in me, towards ‘object-making.’ What would happen if I allowed myself to express these beliefs, these opinions, through these things?” 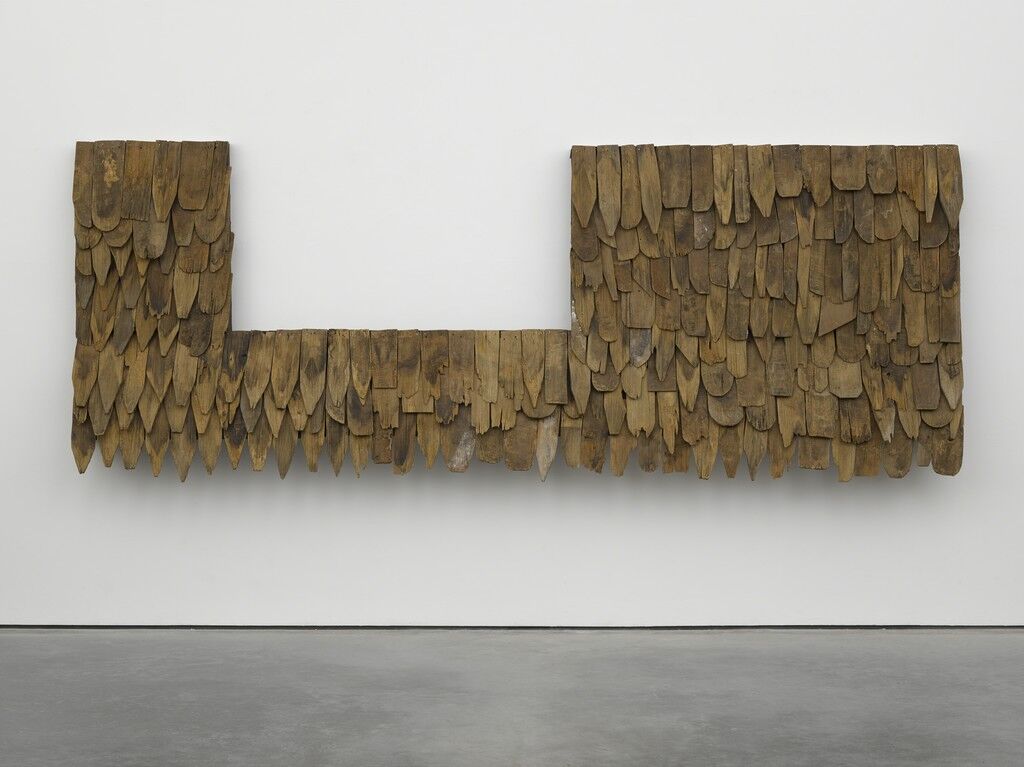 Theaster Gates
Tiki teak, 2014
White Cube
Advertisement
BE: During the walkthrough you audibly exercised consideration when using the word “art” to describe the objects that you make. You talked about being reluctant to “make marks,” as if that expressiveness were indulgent, and about the aleatory aspect of the gym-floorboard paintings and the tar paintings as a means of minimizing the artist’s gesture. In both of those cases, you employed materials that we might more typically associate with labor. You described how you fit the boards together in the first case and how you worked the tar and felt as a roofer in the latter. Can you expand on the relationship between art and work in your practice, and how the two overlap?
TG: Art today is so expansive. It seems almost as if the more marginal your practice, the better. So instead of learning how to paint figuratively, it’s possible to use the vestiges of your youth, or the things closest to your heart, to create art. That is in evidence in this show.
There’s a part of me that feels deprived of art school. My parents were very reluctant that I should choose art as my vocation. They wanted more than anything for me to get a good city job, have a family, go to church, and just have a happy, normal life. Yet everything they had taught me—to be a freethinking, imaginative creature—was totally opposed to that kind of “okeydokey” life. So I sought to marry the possibilities between the radical freedom inherent in me as a young person and the values of my mum and dad. In this work is the freedom to believe in those histories and radically to depart from them. 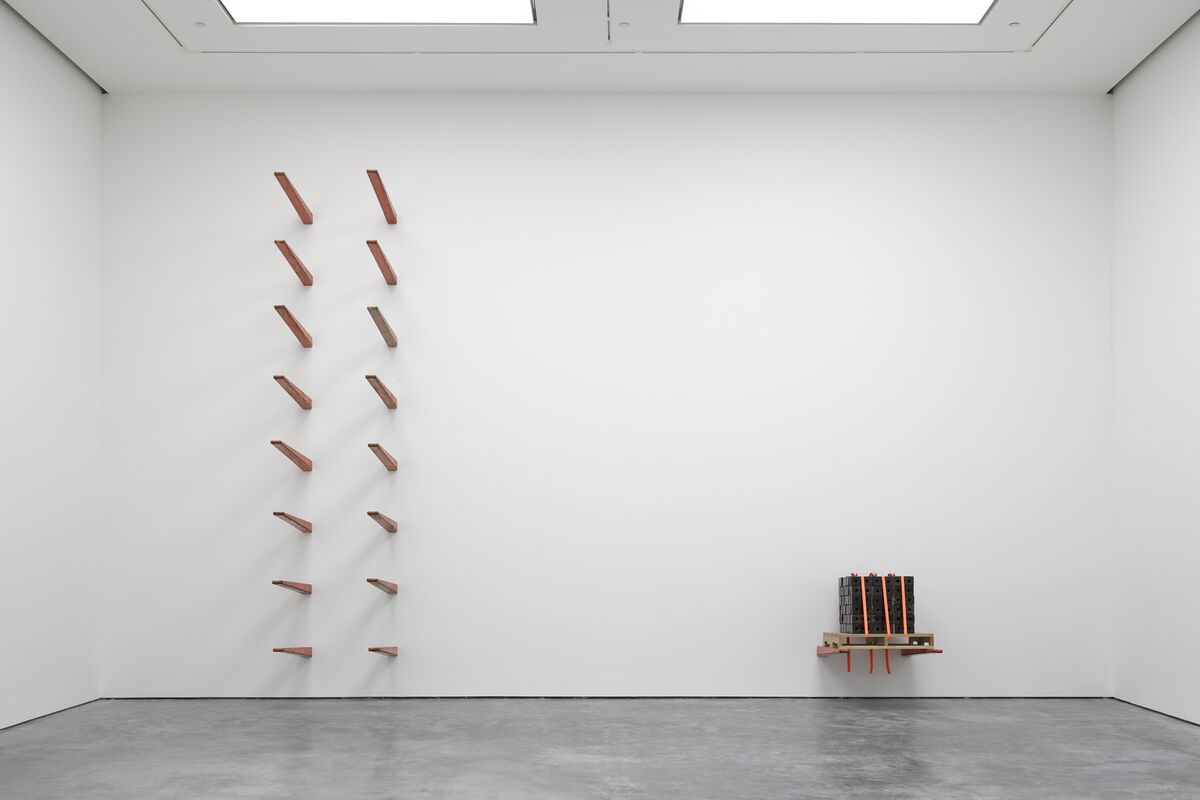 BE: The tension is fascinating, and you talked about reintroducing narrative. That these abstractions, which might typically seem denuded of any social or political meaning, are in fact invested with it by virtue of your own personal history.
TG: Art has grown. It’s no longer a question of whether I can put something like a pot in a show. I don’t feel cynical about the world of art. I feel that one has to come to it with sincerity, on one’s own terms. We can celebrate that pot in the context of a much more complicated set of systems that elevates things that would not otherwise be elevated.
I didn’t go to art school, but I am loaded with other things. I would like to say to a young brother or sister who has not had the opportunity to go to art school, but had to learn to live life in other ways, that there are codes of possibility that art school won’t offer you that will make you the most badass artist in the world.
Ben Eastham