Thelma Golden Reflects on 10 Years at the Helm of the Studio Museum, and Harlem’s Changing Face 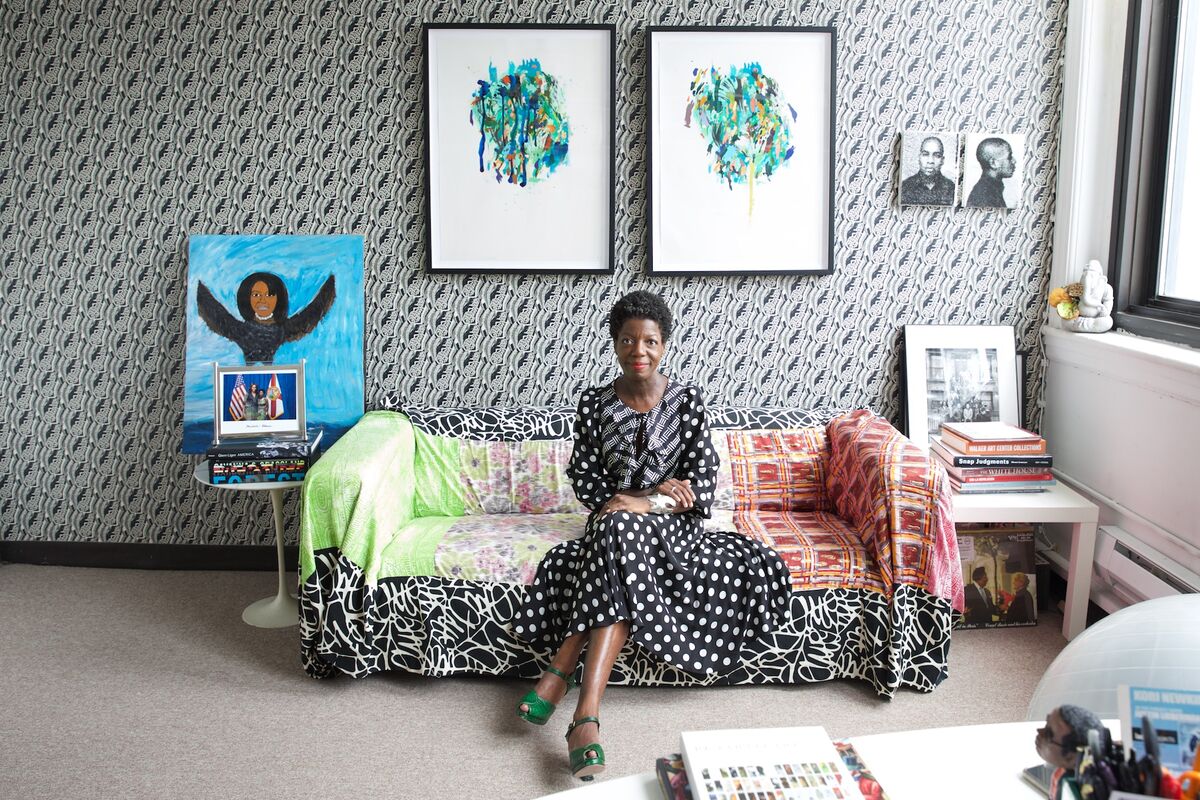 On any given day, emerge from 125th Street station in Harlem onto the wide thoroughfare of Martin Luther King, Jr. Boulevard, and you’ll find a hubbub of activity, including street vendors hawking iPhone cases and bootlegged CDs. Suspended from an unassuming five-story former bank is
David Hammons
’s African-American Flag (1990), a version of the American stars and stripes, its white and blue replaced with black and green. The flag, which marks the home of the neighborhood’s cherished contemporary art institution, the Studio Museum, is now an equally familiar part of the landscape.
“My window faces out on 125th Street,” says Studio Museum director Thelma Golden when we meet in her office, the sound of a siren blaring past. “I feel like I am literally on the street every day. There is an incredible amount of movement—it’s the movement of people, it’s the movement of the cars, it’s the sounds. This street is a life force in and of itself. And to be in its vortex is an amazing thing.”
It’s hard to think of an institution that brings the life of the street into the museum quite so fluidly as the Studio Museum (often referred to affectionately by just its first name). The Studio’s program, focused on artists of the African diaspora, mirrors the local community’s demographics. And its free Sunday admission and educational initiatives (student-shot photographs often hang on the walls of the downstairs galleries) fuels an inclusive, accessible ethos. Studio openings, far from the relatively stiff affairs of the museum’s counterparts to its south, bring a celebratory crowd who, in the summer months, revel in the museum’s outdoor space. It’s a crowd that frequently includes the many artists whose careers the museum has nurtured through its residency and exhibition programs. 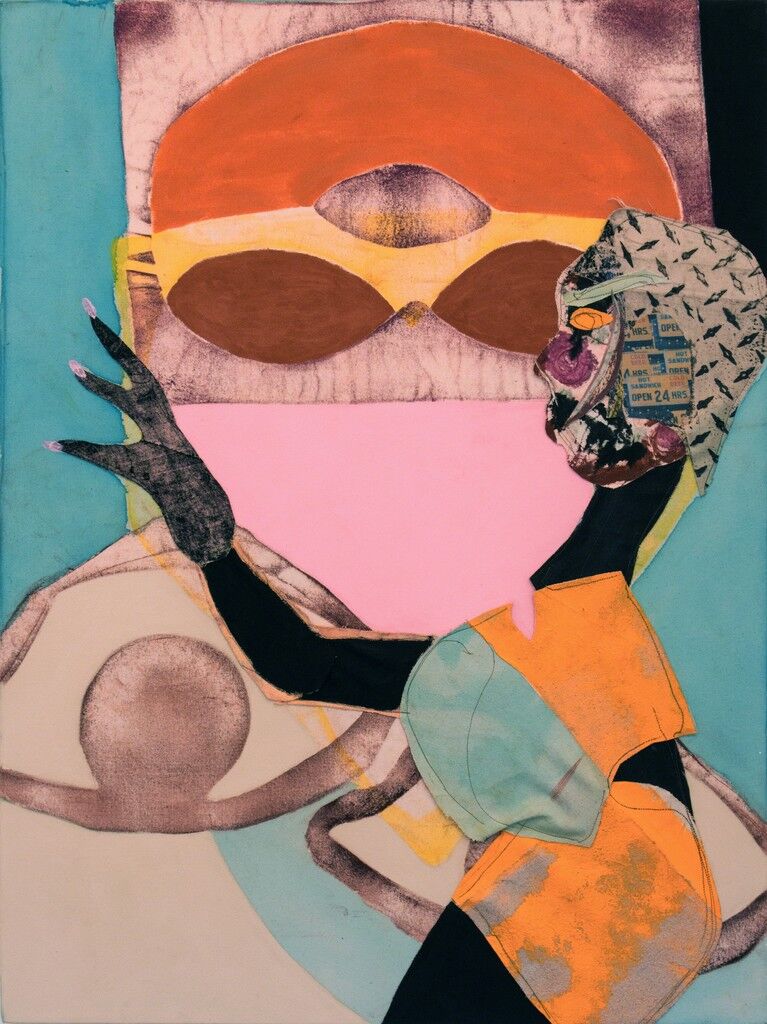 Tschabalala Self
Bodega Run, 2015
The Studio Museum in Harlem 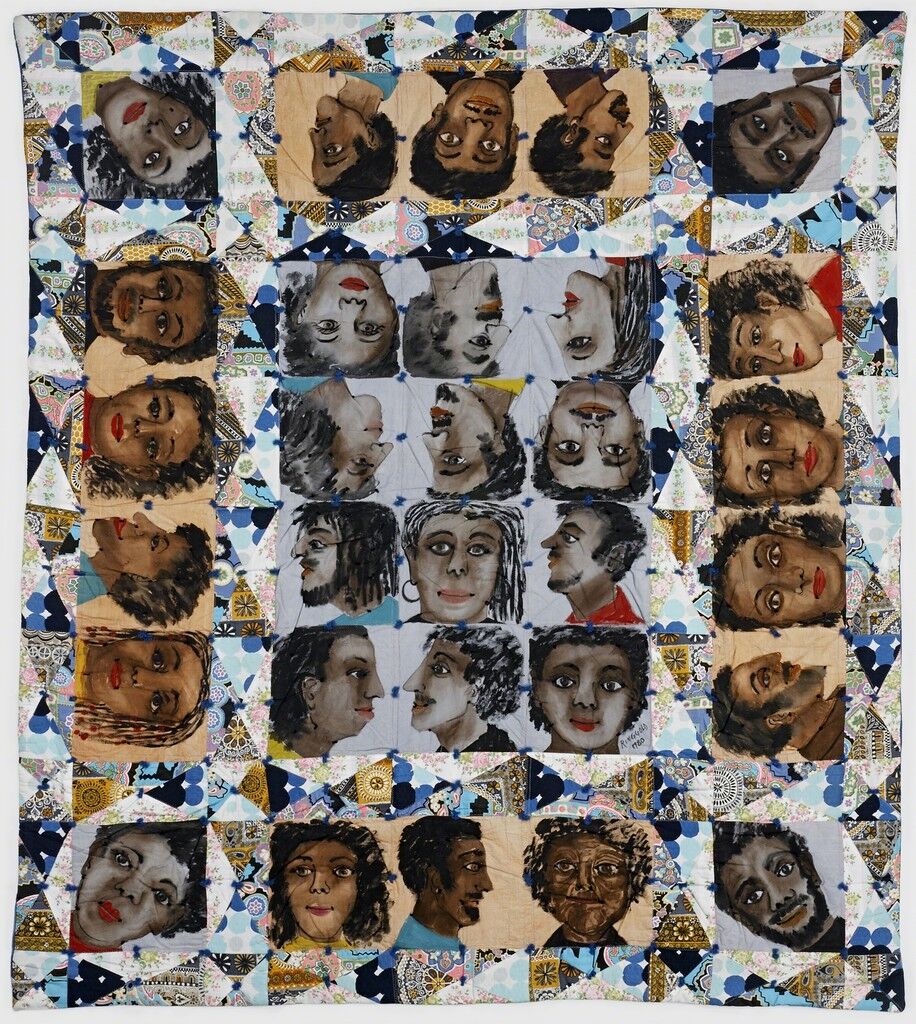 Faith Ringgold
Echoes of Harlem, 1980
The Studio Museum in Harlem
At the last opening, Golden herself could be seen perched joyfully on the reception desk, the focus of a transfixed group surrounding her. The director’s formidable presence transcends her slight frame. That night launched several exhibitions that give a snapshot of the museum’s programming. Among them, “A Constellation” intermingles works by major artists from the museum’s collection (icons like
Betye Saar
and
Faith Ringgold
) with the work of emerging artists (such as
Tschabalala Self
and
Sondra Perry
), and a sculpture by former artist-in-residence Marc Andre Robinson plumbs W.E.B. DuBois’s theory of the African-American “double consciousness” by way of a spiralling form made from wooden chair legs. Also on view in the downstairs galleries is documentation of
Lorraine O’Grady
’s ecstatic performance Art Is… at the 1983 African-American Day Parade, in which the artist invited Harlem residents to pose within an ornate gold frame.
Golden grew up in Queens, but her father was born and raised in Harlem. She interned at the Met during high school (“the idea that you could go and see things that were hundreds of years old, that they were preserved and collected—that was fascinating to me”), and went on to intern at the Studio Museum as a sophomore while studying at Smith College (“interning here at the Studio Museum gave me a sense of my place in museums”), before taking a curatorial position there after school in 1987. The following year, she became the first black curator at the Whitney Museum of American Art. 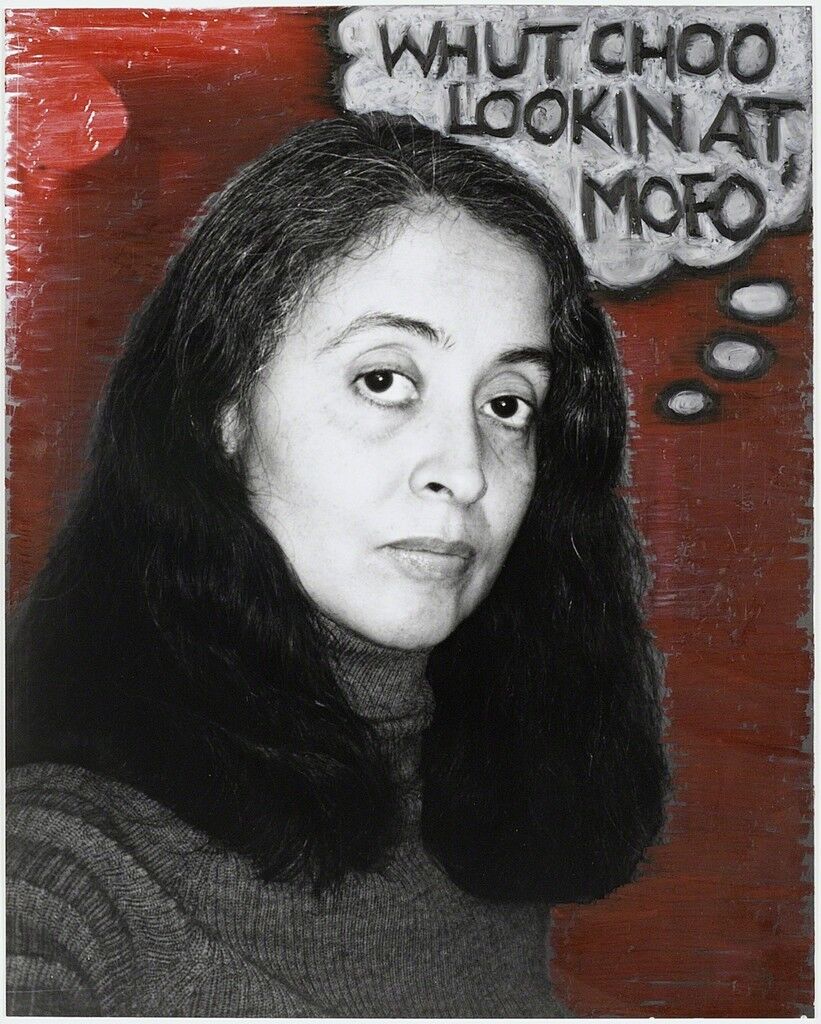 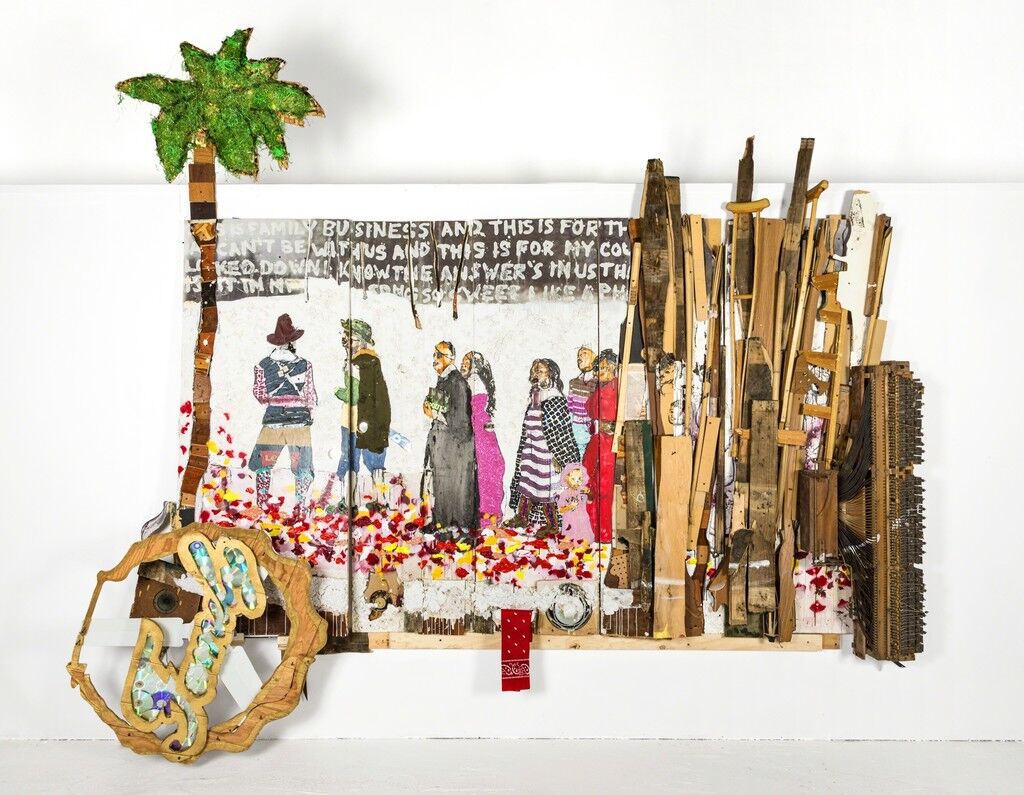 Aaron Fowler
Family, 2015
The Studio Museum in Harlem
Advertisement
Broad critical acclaim for the watershed exhibitions she curated while there—most notably “Black Male: Representations of Masculinity in Contemporary American Art” and the 1993 Whitney Biennial (which she worked on alongside three other curators)—came late. At the time, she took considerable heat for them. Jerry Saltz has since called that biennial “the moment in which today’s art world was born.” And, in 2013, the New Museum took stock of its influence (and that of other pivotal shows of the same year) in “NYC 1993: Experimental, Jet Set, Trash and No Star.”
Did she anticipate the impact that biennial would have? “What I did know,” she says, “was that I was existing in a very singular position. I knew who I was; I knew who I was in that place; I knew what that meant. I felt a great sense of responsibility because I was there. Have you seen Hamilton?” she asks, referring to Lin-Manuel Miranda’s critically acclaimed Broadway musical. “My whole life is now in the context of Hamilton. I knew what it meant to be in the room, and I also knew what it meant to have my shot at something.”
Across from her desk, a 1993 copy of Artforum—on which one of
Daniel Joseph Martinez
’s now-familiar museum admission pins that together spelled “I can’t imagine ever wanting to be white,” is printed—sits, propped up on a bookshelf. “I am gratified that the ’93 biennial lives in the public conversation with some complexity at this moment,” says Golden. “I will not take credit for that as something specific that I did, but I will say that I am proud to have been a part of it. It’s not so much what the show itself was about but what it allowed for. Someone’s got to till the ground, you know?” 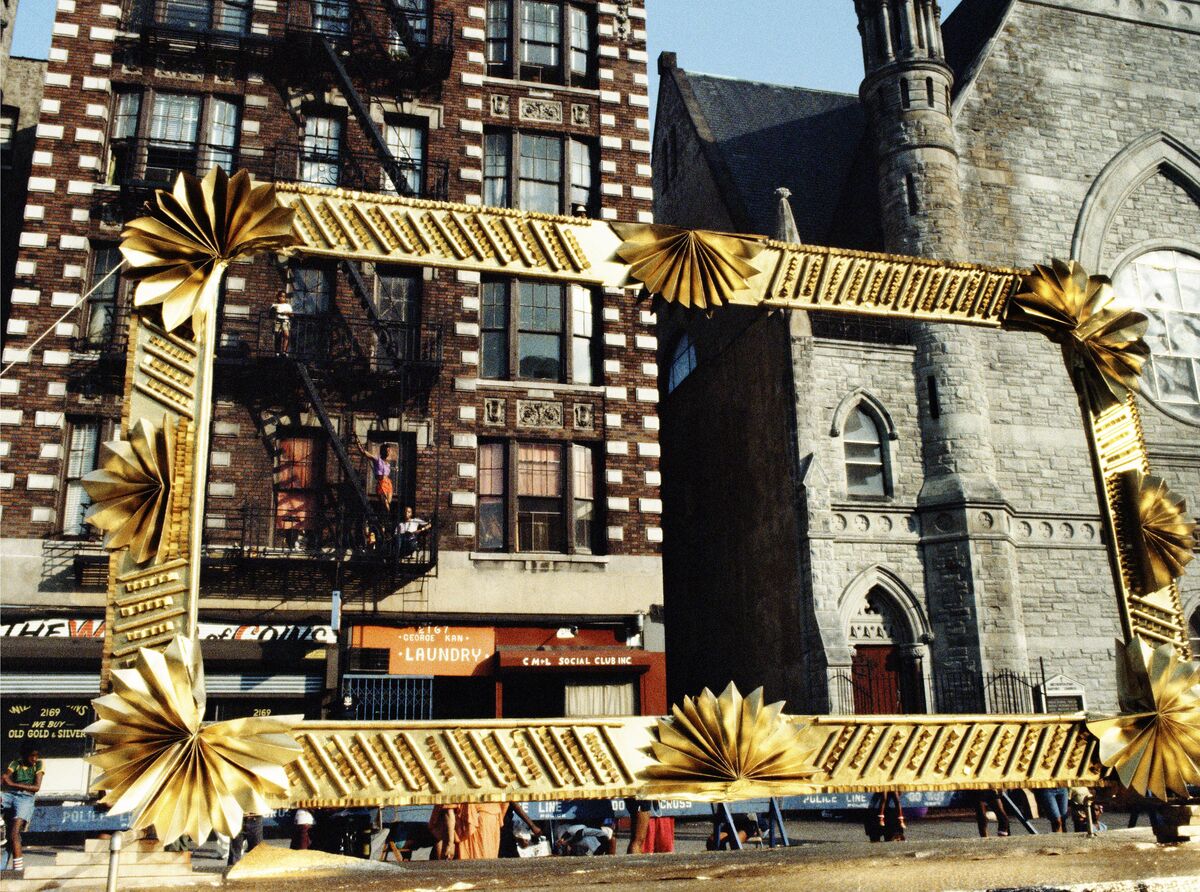 Golden is now in her 10th year as the Studio Museum’s director, and 15 years have passed since she joined its curatorial staff. “I just turned 50,” says the director. “The wisdom of middle age is showing me that yes, things all make sense with time.” In that time, she’s watched Harlem change significantly, speculation around which has been the subject of numerous articles. “A lot has shifted,” reflects the director. “Much of it from the outside can be talked about as it’s related to issues like gentrification, which are real, but other parts of it are actually less easy to qualify. It’s about changes in the city as a whole, it’s about changes that come when a community has such an important past, how it defines ‘future.’”
With prominent downtown gallery Gavin Brown’s enterprise’s impending move to the neighborhood signaling a new chapter in Harlem’s gentrification, how will the museum—which earlier this year announced its $122 million upcoming expansion—reflect those changes? “I think of this structure as standing still and evidencing it,” says Golden. “We have been here. Everything that has changed and gone by, we have been here to witness. This building has been able to absorb that history in very literal ways.”

Despite current economic and demographic shifts, Harlem sometimes seems irrevocably associated with the past. In the popular imagination, the neighborhood conjures the great era of 1920s cultural bohemianism known as the Harlem Renaissance. “I was often horrified by the way that the mainstream media, when they would want to picture Harlem, would sometimes do it with images that were over 50 years old,” says Golden. “It’s a glorious past, and that is truly the beautiful cultural legacy of this community: Harlem of the ’20s, ’30s, and ’40s. But I just thought, why is it so hard to imagine an image for this community today?” It drove her to create the now-13-year-old “Harlem Postcards” project, in order to “create a cumulative vision of this community through the eyes of artists, by commissioning artists to come up here to Harlem, take a picture that would print as a postcard, and that our audience could take with them for free.”
Golden says she hopes that, over time, the project can serve as something of a family photo album for the neighborhood: “‘Here we are today. Here we are the next year. Here we are the year after.” The project evidences the extent to which the Studio Museum’s values lie in the local community, in this case helping to strengthen Harlem’s identity. “There are some programmatic priorities that have been about, how the museum can be part of understanding this moment of change,” says Golden. “As always, when I have questions, I turn to artists.” 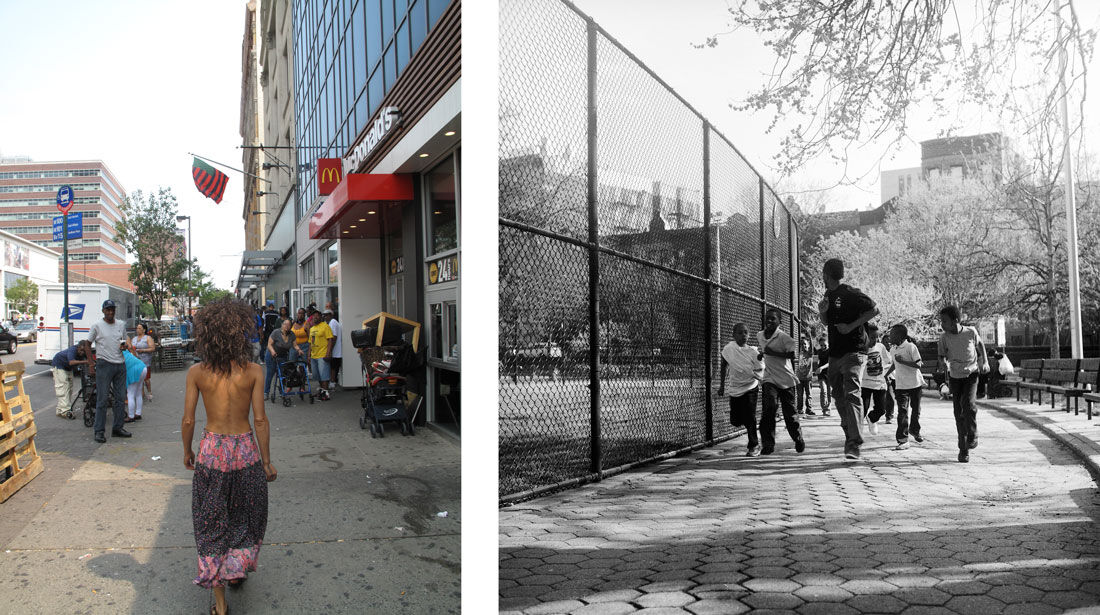 The museum’s influence extends far beyond Harlem. Studio protege Thomas Lax had a hand in curating MoMA PS1’s “Greater New York,” where another of Hammons’s flags currently flies. Okwui Enwezor’s Venice Biennale exhibition “All the World’s Futures” likewise featured numerous artists that the Studio has supported at one point or another. (Notice of Golden’s achievements has stretched as high as the White House, the director having recently been tapped to join the board of Obama’s Presidential Library.) “I think of the institution in some ways equivalent to how one would think of a tree,” says Golden of the Studio’s outward growth. “We have deep local roots. We have been in this neighborhood since 1968. When we were founded, it was with a deep looking-back at the Harlem Renaissance as a point of inspiration. But also in ’68 it was a looking-forward. Like a tree, our branches spread everywhere.”
In the coming years, those branches are set to reach much further as the museum expands its platform for showcasing and mining the “global black presence,” as Golden describes it. Is there any risk of losing its tight-knit community in doing so? “Of course I don’t want to lose all that makes this museum special,” she says. “But I actually don’t see that as the challenge. What I see as the challenge is to take what makes this museum special and allow that to grow. I just want to make more of it.”
—Tess Thackara
Explore the Studio Museum in Harlem on Artsy.
Related Stories