These 10 Unrealized Artworks Would Have Been Spectacular

Abigail Cain
Dec 9, 2016 4:59pm
For every work on display in a museum or gallery, the artist has overcome one or dozens of hurdles: creative roadblocks, material limitations, bureaucratic red tape, even stalled fundraising campaigns. Sometimes, however, these hurdles are simply insurmountable. From
Leonardo da Vinci
’s bronze horse to
Jeff Koons
’s steam engine, here are 10 artworks that were never realized. 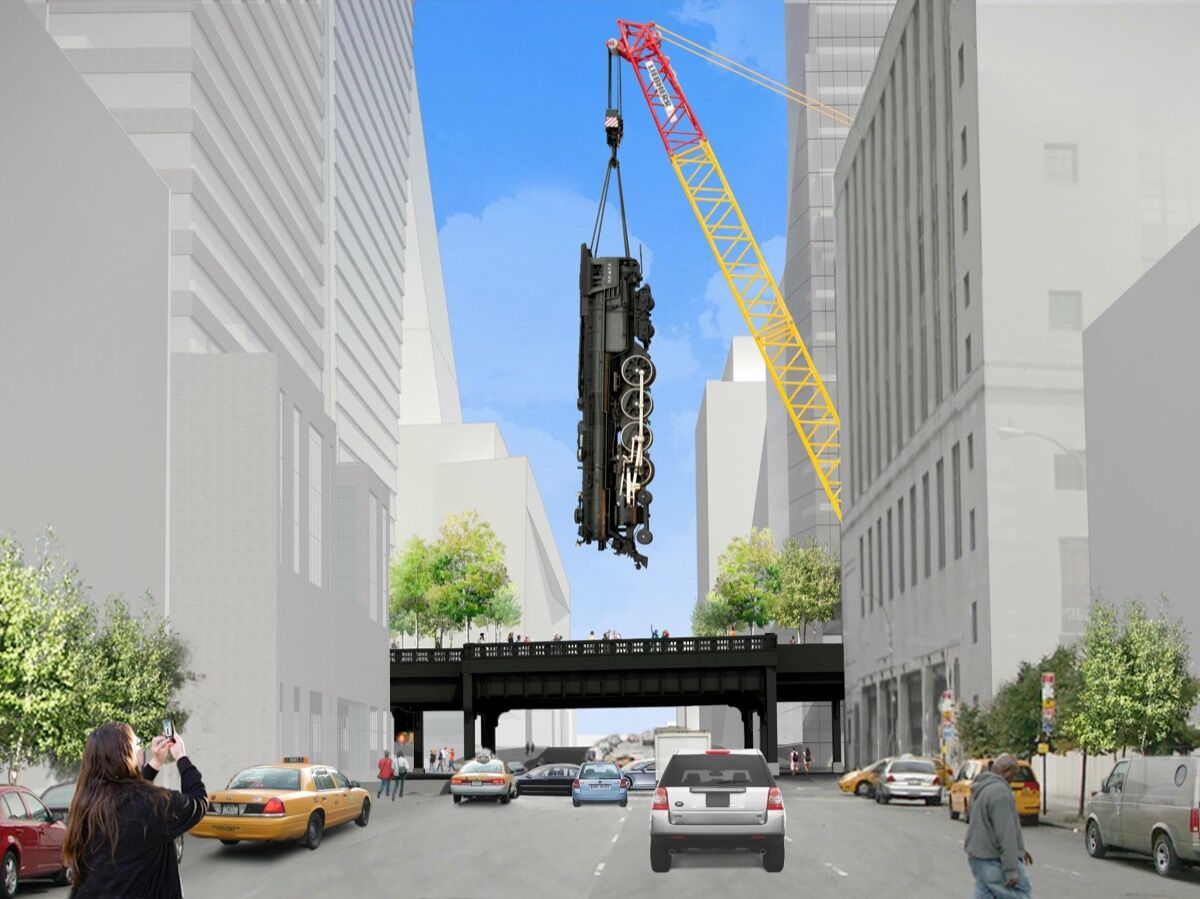 So far, all attempts to realize Koons’s 161-foot-tall sculpture have run out of steam. The American artist first proposed the work—a full-size replica of a 1940s locomotive, suspended nose-down from a crane while periodically spinning its wheels and belching smoke—to French billionaire art collector François Pinault in the early 2000s. But when Pinault’s plans for a museum on the Seine fell through in 2005, Koons’s idea was once again up for grabs. Both LACMA and Friends of the High Line expressed interest in the massive work; in fact, LACMA spent more than $2 million in feasibility studies, finally determining that Train “was safe, possible, and more complicated than anyone thought.” The High Line picked up the project in 2008 and again in 2012, only to see it derail both times. The likely culprit: an estimated cost of $25 million to $50 million.

Cai Guo-Qiang, Placid Earth: A Project for the Meeting of Millennia

Cai
is no stranger to difficult projects. Last June, 21 years after his initial attempt, the Chinese artist finally completed Sky Ladder (2015), a fiery latticework of fuses and fireworks that extended 1,650 feet into the air and burned brightly for two and a half minutes. But Placid Earth, proposed in 1993 for an exhibition associated with the United Nations, remains incomplete. For this work, Cai envisioned all inhabitants of Earth flicking off their lights simultaneously for the first moments of the new millennium, allowing the planet to “leap across Time and Space, a thousand years, ten thousand years, all the way to where it meets the original, primal self.” He even proposed a live broadcast from satellites, offering participants a god’s-eye view of Earth as it momentarily plunged into darkness. 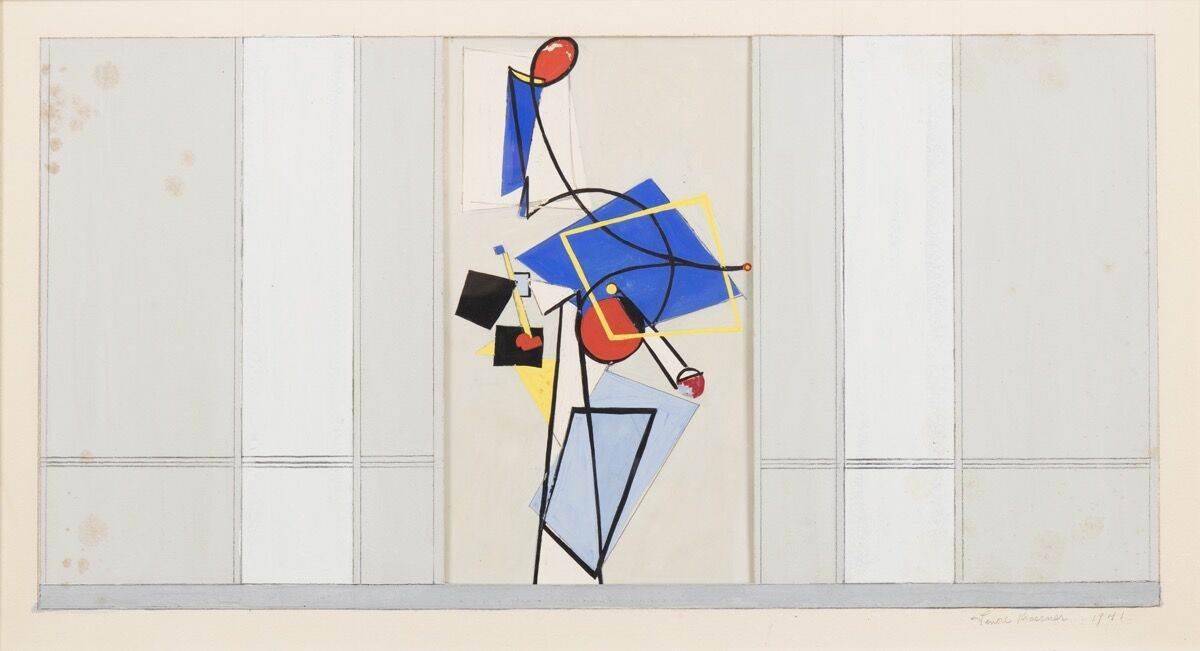 Advertisement
Beginning in the 1930s, the WNYC radio studios in Manhattan welcomed a series of abstract murals by the likes of
Stuart Davis
and
John Von Wicht
, courtesy of the Works Progress Administration. Absent, however, was a work by
Krasner
. The
Abstract Expressionist
painter served on WPA’s mural division throughout the ’30s, assisting other artists in completing their works. But, she later said, “Always dangling in front of me [was] that when I completed this job, I absolutely would get an abstract mural to do for myself.” Despite a series of detailed preparatory sketches—which saw her subject transform from a series of still lifes into abstract shapes à la
Piet Mondrian
—the mural was never completed, as the WPA shuttered in 1942 soon after the United States entered World War II.

Although Palestinian-British artist
Hatoum
is better known today for her large-scale sculptures and installations, in 1981 she was a recent art school grad working mainly in video and performance. Her proposal that year for the New Contemporaries show at ICA called for displaying live video feeds of the gallery’s toilet stalls, putting into focus the taboos and societal restrictions surrounding certain behaviors and bodily functions. Although the New Contemporaries committee selected Hatoum’s work for the exhibition, ICA was less enthusiastic: They refused to let the piece be realized on the grounds that the bathrooms were outside the gallery space, thus viewers were not expecting art to follow them in. 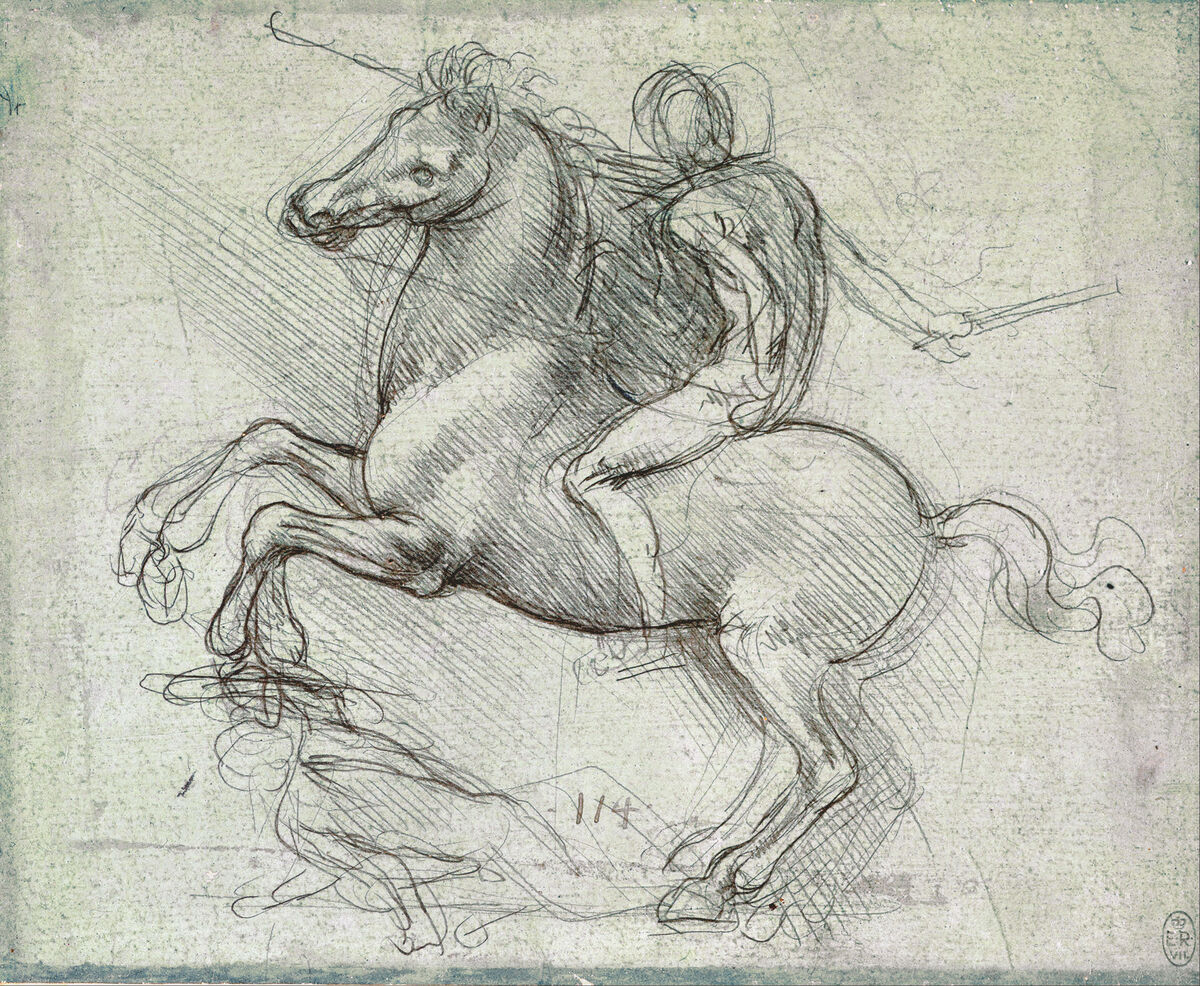 When da Vinci applied for a job at the court of Ludovico Sforza, Duke of Milan, he emphasized his engineering practice by listing the things he could build: portable bridges, water-supply systems, even cannons that could hurl rocks “like a hailstorm.” But his most audacious proposal for the duke was a 79-ton bronze horse, what would be the largest equestrian statue in the world. The Italian polymath presented a 24-foot clay model to Sforza in 1493, but his plans were cut short when French troops overran Milan the following year. The bronze for da Vinci’s horse was instead used to make weapons; his clay model shattered in 1499 when enemy archers used it for target practice. Nearly 500 years later, a retired American pilot took it upon himself to finish what da Vinci had started—a project that resulted in two massive bronze horses inspired by the Old Master’s design, one in Milan, the other in Michigan. 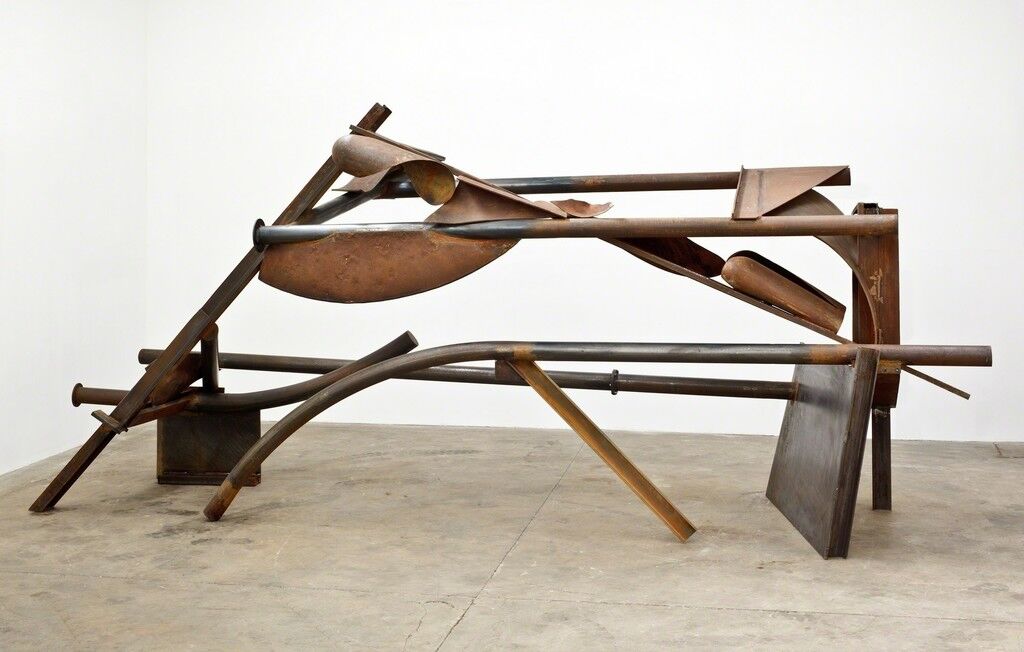 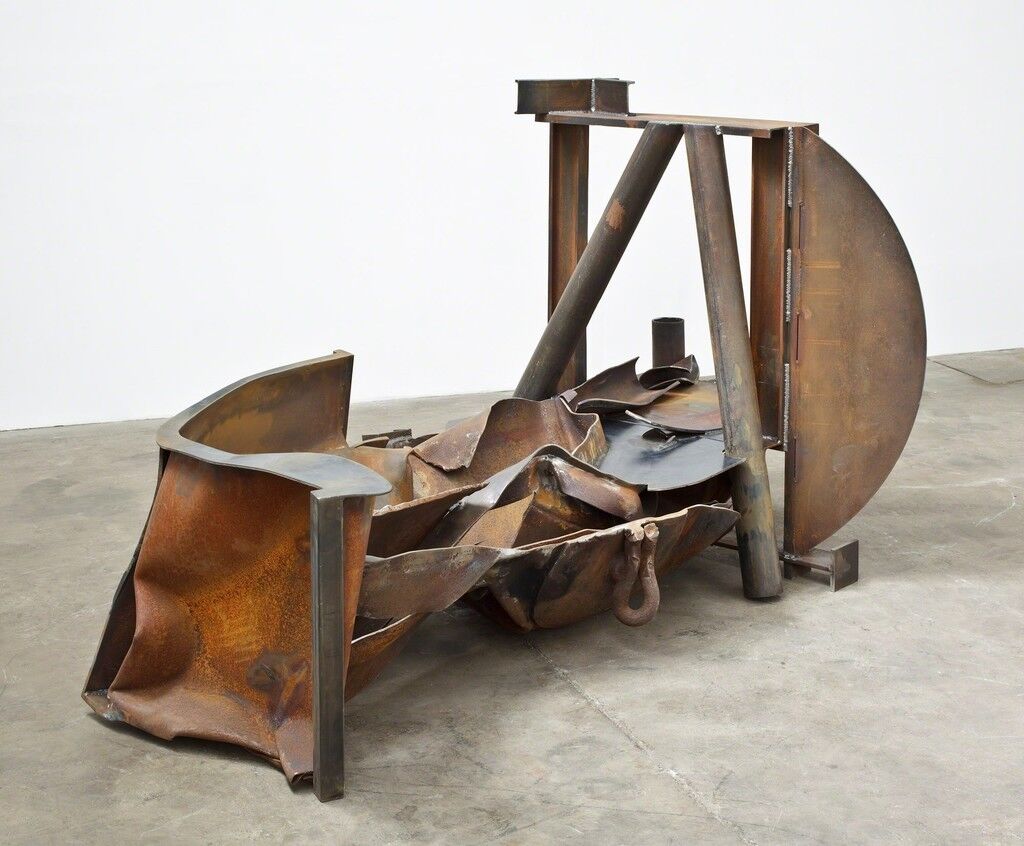 Anthony Caro
The Brook, 2012
Gagosian Gallery
It wasn’t until his late eighties that English abstract sculptor
Caro
began work on the most monumental design of his career. Invited to craft a proposal for the Park Avenue public art program, he envisioned a massive three-part sculpture that could capture the attention of pedestrians and drivers speeding by each day. Caro originally planned for the work to stretch one city block; by the end, it was to encompass three. Although the sculpture was never realized—Caro was unable to scrape together the necessary funds—the artist and his assistants fabricated a series of models at 1:4 scale, giving a sense of what the final work might have looked like. The models went on view at Gagosian Gallery in 2013, just months before the artist’s death at 89.

Christo and Jeanne-Claude, The Museum of Modern Art Wrapped

MoMA was almost
Christo and Jeanne-Claude
’s first wrapped museum. Working with curator William Rubin, they planned to cover the building for two weeks following the conclusion of the landmark exhibition “Dada, Surrealism, and Their Heritage” in 1968. Despite Rubin’s support, the project never got off the ground—the insurance company warned that the moment the wrapping began, they would cease coverage. Instead, the museum granted the couple a show of preparatory drawings, collages, and scale models. Other components of the unrealized project include an inflated “air package” in the sculpture garden and a stack of oil barrels (in the shape of an ancient tomb structure known as a “mastaba”) that would completely obstruct 53rd Street traffic.

Nancy Spero, Messages to the Public

Between 1982 and 1990, the Spectacolor board at One Times Square was home to a series of video artworks by artists ranging from
Keith Haring
to
Barbara Kruger
. The program, administered by the Public Art Fund, was known as “Messages to the Public,” and it featured 30-second animations screened between a 20-minute commercial loop. When feminist artist
Nancy Spero
was offered a slot in 1986, she selected two quotes from her previous work: “Certainly, childbirth is our mortality, we who are women, for it is our battle” (taken from an Aztec text) and “This womb does not belong to doctors, legislators, judges, priests, the state, etc.” (her own words, previously printed on an apron for a pro-choice march). Although the art director signed on immediately, even helping Spero storyboard her video, the board’s owner reportedly flew into a rage upon viewing the finished work. He promptly fired the art director, and Spero’s video never saw the bright lights of Times Square.

Greeting cards. Camping equipment. Hair spray. These were just a few of the hundreds of manufactured items
Ruscha
planned to store inside a 1974 work for the redeveloped Paris district of La Défense. The weatherproof container—built to resemble a traditional marble monument, with French and English inscriptions carved on either side—would have served as a time capsule, featuring interior shelves to house an array of American products. Ruscha suggested opening it once every 100 years for inspection; a small book might also be printed, listing the contents. Although the artist initially set the number of items at 234, the figure was arbitrary, and he later changed it to 654. Ultimately, however, his proposal was rejected. 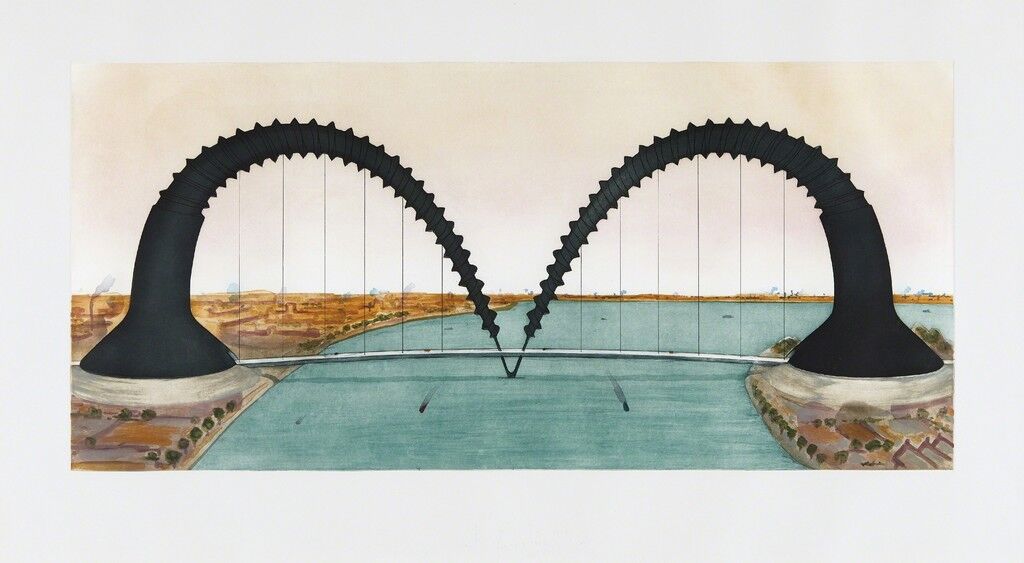 Claes Oldenburg
Screwarch Bridge (state III), 1981
Phillips: Evening and Day Editions
In the 1960s,
Pop
artist
Oldenburg
began proposing a series of public monuments for major cities across the globe. A number of them were intentionally preposterous: His plans for New York included an enormous, unstoppable bowling ball that would roll down Park Avenue toward Grand Central Station, while in Central Park, a group of colossal, mechanized billiard balls would be hollowed out to contain a housing program. But in 1977, Oldenburg and his partner (and eventual wife)
van Bruggen
crafted a slightly more serious proposal for a bridge that would span the Nieuwe Maas in Rotterdam. Although they made a number of scale models and drawings for the project, which featured two arched screws in the couple’s signature tongue-in-cheek style, the city never adopted their plans. As with these other works, it wasn’t meant to be.
Abigail Cain
Related Stories