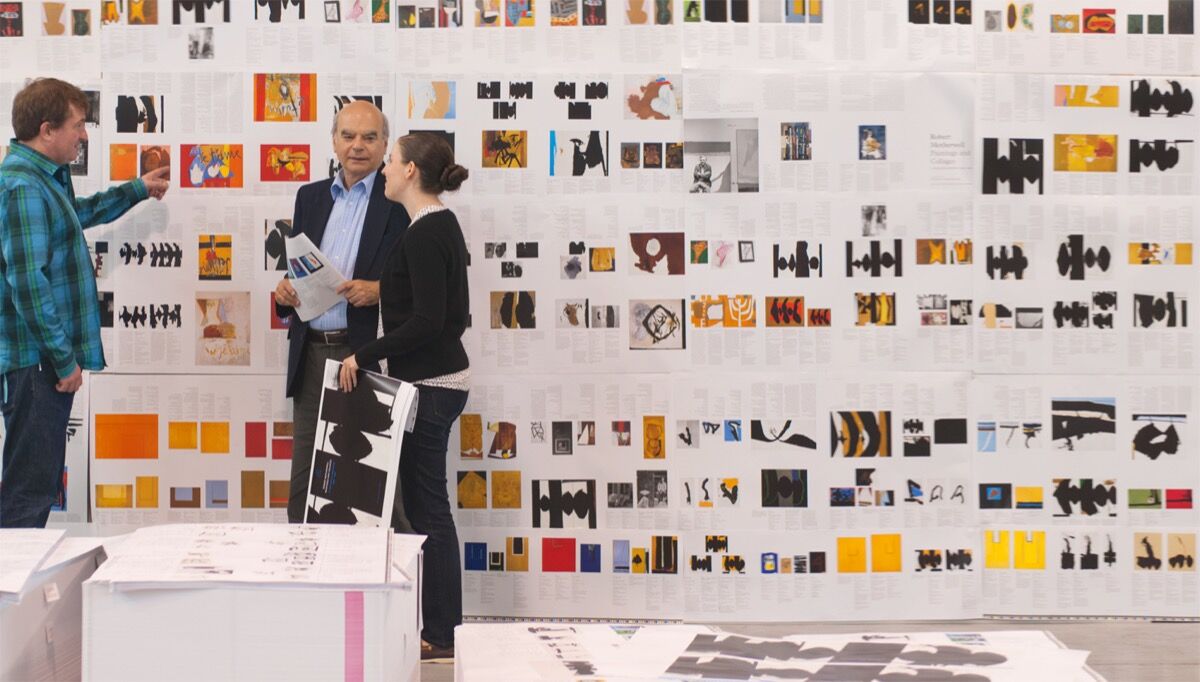 Tim Clifford, Jack Flam, and Katy Rogers on press during the printing of the Robert Motherwell catalogue raisonné at Trifolio, Verona, Italy, in May 2012. Photo courtesy of the Dedalus Foundation.

Twenty-five-year-old
Robert Motherwell
arrived in Manhattan in 1940, an erudite West Coast transplant who planned to study art history at Columbia University. Collector Peggy Guggenheim soon discovered the aspiring artist and, sensing promise, commanded him to make a collage for a survey at her New York gallery. This early experimentation with the medium sparked years of fruitful collage-making that served as a prequel of sorts to Motherwell’s later
Abstract Expressionist
paintings. One such collage, titled Figure, was completed in 1945 and sold the following year. From that point on, the work vanished from the public eye. During the next half-century, it never went up for auction or appeared on loan in a museum; it wasn’t offered for sale by a dealer or gallery.
So, when Katy Rogers began to hunt down Figure in the early 2000s, the trail had gone cold. As a researcher for Motherwell’s catalogue raisonné project, she was part of a team tasked with finding every painting and collage that the noted Abstract Expressionist had made during his lifetime. And in this case, all Rogers had to go on was one black-and-white archival photograph of Figure and the name of the man who had purchased it back in 1946. She scoured the internet for signs of the buyer, only to discover that he had passed away years earlier. His obituary listed the names of his children, so Rogers tracked them down, too, and sent letters asking about the work. Yes, they eventually replied, we know where the collage is. After some 60-odd years, it was still hanging on their mother’s wall—only now she resided in an assisted living facility on the West Coast. Rogers sent someone out to take a new photograph of the rediscovered work (this time, in color) to be printed in the catalogue raisonné. Case closed.
“Something like provenance is the most time-consuming aspect of a catalogue raisonné because, basically, it is detective work,” said Rogers, who co-authored the Motherwell catalogue raisonné and currently serves as the project’s director. “You’re tracking down people, and you’re finding out their stories.”
And there are hundreds, sometimes thousands, of these stories to dig up. A catalogue raisonné is meant to serve as a comprehensive list of every work an artist has made, which means the final product is often comprised of several hefty tomes. The 2012 Motherwell catalogue raisonné contained some 3,000 works in its three volumes; the forthcoming catalogue raisonné for American artist
Richard Diebenkorn
includes more than 5,000 drawings, sketches, and paintings, in four thick volumes (together, they weigh 33 pounds).
Of course, not every work included in a catalogue raisonné requires the same effort as Motherwell’s Figure. Many are not “lost” at all—works residing in museum collections are easily located, as are those that have been recently sold through a gallery. But the sheer scale of the research process can still be intimidating. To begin, most catalogue raisonné teams compile a list of known works; in the case of
Hans Hofmann
’s catalogue of paintings, the total initially came to about 1,400. “It was quite a big number,” said Suzi Villiger, editor and project manager of the catalogue raisonné. “It was a huge number, really, and it was daunting.”
Typically, these lists aren’t built from scratch. According to Villiger, Hofmann and his wife kept a remarkably complete studio ledger that included catalogue numbers, titles, and sometimes even locations of works. That, combined with an estate inventory of everything in his studio when he died, provided the researchers with about 85% of the works that would end up in the catalogue raisonné. Similarly, Rogers said that the Motherwell team was “very lucky” to begin their research with a veritable mountain of archival material—some 30,000 images, including installation shots and personal photographs, as well as a robust inventory of works that had been set up before the artist’s death.
An art dealer’s records often contain valuable information as well, although it can be risky to rely on those too heavily. Galleries that have been involved in major lawsuits involving forgeries or fraudulent behavior are often unwilling to share information with researchers. When one gallery refused to open their records to the Richard Diebenkorn Foundation, catalogue raisonné editor Jane Livingston said she covertly gained access to their card index and surreptitiously took notes for later use.
Most dealers, however, are quite cooperative—and for good reason. As art has skyrocketed in value over the past decades, catalogues raisonnés have become an important tool in preventing fakes and stabilizing an artist’s market. They can also determine price: “If a painting isn’t in the catalogue raisonné, it’s definitely hard to sell,” Villiger explained. “So that does motivate a lot of collectors and dealers and auction houses. That isn’t to say that it’s an easy task always to get everything you need, but there’s an understanding of the importance of trying to be included.” 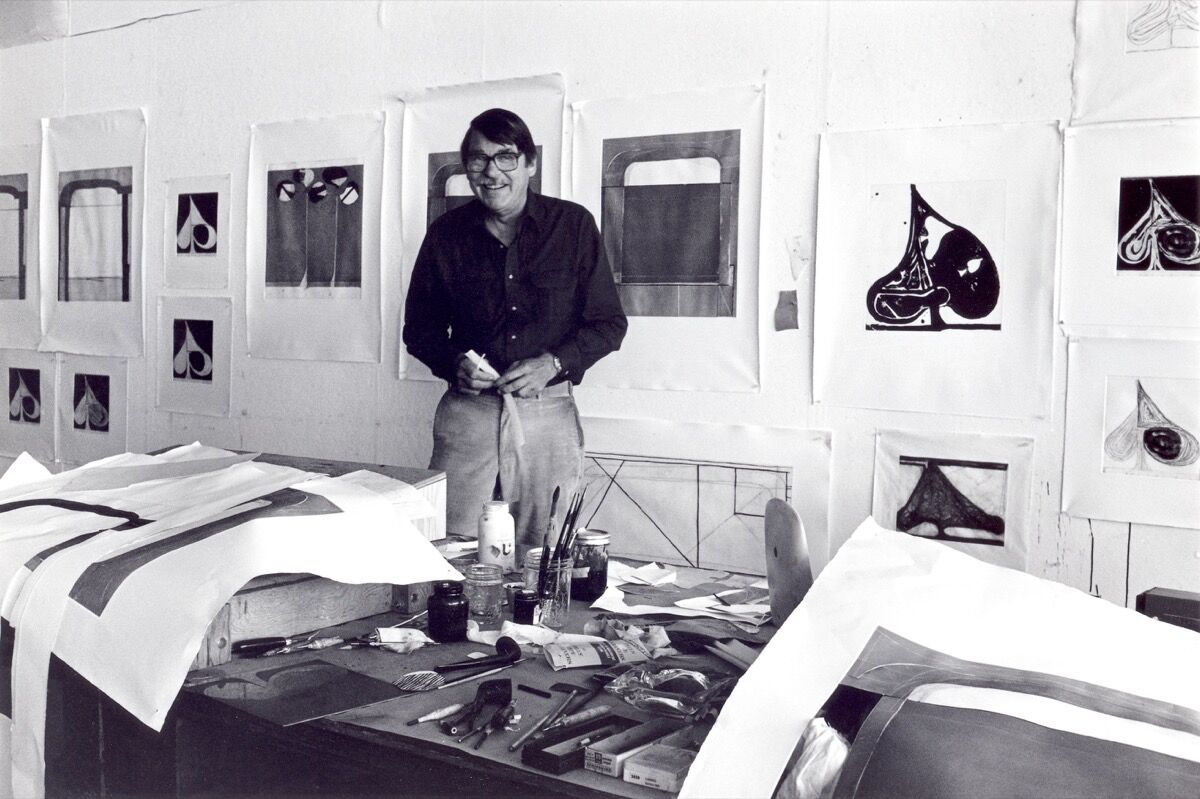 Armed with dealers’ records and artists’ inventories, the catalogue raisonné team is finally ready to track down the missing art. In the early phases of outreach, researchers often place advertisements in a range of newspapers and art publications. For Diebenkorn, active in California, those included the San Francisco Chronicle and the Los Angeles Times—but also the New York Times, Artforum, and Art in America. For Motherwell, ads appeared in local papers across Provincetown and East Hampton, where the painter had been particularly active. In recent years, galleries that represent the artist in question have also emailed “call for works” announcements to their mailing lists.
“But a lot of it is also through word of mouth,” Rogers said. Researchers will meet with museum curators and directors, as well as galleries and dealers, to spread the news about the project. “We cast a wide net and then slowly, slowly close that net,” she explained. “Sometimes what we’ll end up doing is a lot of genealogy research if someone has passed away, trying to find heirs, or calling companies where we knew someone worked 30 years ago and seeing if we can track someone that way. Tax documents, Social Security documents—those kinds of things can come in handy.”
This is by no means a speedy process. “I can’t tell you how many times I’ve sent out a letter, and then three years later I get a response,” Rogers said. Projects often last a decade or more. Livingston joined the Diebenkorn catalogue raisonné project in the early 2000s with the assumption that it would take six or seven years; they finally wrapped things up in 2015. “I knew that it was going to be long and arduous, but I didn’t know how long and arduous,” Livingston said. The timeline is usually influenced by a combination of factors, including the size of an artist’s body of work and the amount of money behind the project. For Motherwell’s catalogue raisonné, the Dedalus Foundation could afford to pay a large, mostly full-time research team; “that helped expedite the process,” Rogers said.
At first glance, a 10-year-long research project may seem unappealing. “I always said I would never do a catalogue raisonné because it’s such a long slog,” Livingston said. “But I’m so glad that I ended up working on this. It’s a very creative process. It’s something I had thought of, I think, as sort of humdrum and nitpicky research, but it’s a challenge.” Research for a catalogue raisonné sometimes resembles an art more than a science—Rogers remembered a particularly resourceful researcher who pored over design blogs from Architectural Digest for Motherwell works that were serving as backdrops in the photographs. After that, it was as simple as reaching out to the interior designer, who could often connect them with the collector.
And, of course, “there is always serendipity,” Livingston said. She told the story of a Diebenkorn Foundation employee who was standing in line at a Berkeley, California post office when a woman behind her noticed the Foundation’s return address on her letter. They struck up a conversation, and the woman told the employee that she actually owned several Diebenkorns—works that the foundation hadn’t previously been aware of.
Although catalogues raisonnés have arguably been around since the year 1550—when Giorgio Vasari published a list detailing the locations of
Michelangelo
’s works—the research process changed dramatically with the advent of the web. “I am very grateful that I live in a research era that includes the internet,” Rogers said. “There are so many things available now that were not available 15 or 20 years ago. The flipside of that, of course, is that people expect so much more from a catalogue raisonné these days, because they’re so used to having so much information at their fingertips and feeling like everything should be constantly up to date.”
And, since artworks continue to trickle in after publication, catalogues raisonnés are often slightly out of date from the moment they hit the press. (The ones in print, that is. An increasing number of catalogues raisonnés have migrated online, allowing their contents to be updated without issuing an entirely new edition.) Rogers recalled that, just a week after her team sent Motherwell’s catalogue raisonné off to the printer, someone contacted them about a new work that couldn’t be included in the catalogue.
This makes it understandably difficult to decide when to end the project. “That’s part of a catalogue raisonné,” Livingston said. “You’ve got to have a lot of tolerance for unfinished business. The Diebenkorn catalogue raisonné in particular is still missing something like 100 works—and, of course, those are the ones that we know about. There are likely a few more out there that weren’t recorded.”
Rogers agreed. “That’s the hardest part. It’s so difficult to find a time to stop because there’s a sense that a catalogue raisonné should be final. But we had to pick a time and say that we have done as much as we could do. We have built a very solid bibliography, and we’ve tracked 3,000 works of art,” she explained. “But it’s still hard to let go.”
Abigail Cain
Cover image: Matts Leiderstam, After Image (Künstzerstörer), 2011. Image courtesy of Andréhn-Schiptjenko, Stockholm.
Related Stories