Francesca Gavin
Nov 28, 2016 11:05am
Unlike many cities that harbor strong art scenes, Miami still maintains opportunities for artists, by way of available space, relatively low costs, and a rich, multicultural creative community. While it’s host to a healthy selection of serious art collections, museums, galleries, and project spaces, the warm coastal city possesses a sense of remove and quietness for artists (save for during Art Basel in Miami Beach each December), which lends them a sense of creative freedom that art capitals often lack. As a result, the art coming out of Miami consistently feels fresh and experimental.
Over the past decade, as Miami Art Week has increasingly gained steam and real estate developers have moved in, the art scene has undergone change. The once studio-friendly Wynwood has experienced extreme growth, leading the city’s contemporary art epicenter to shift to other neighborhoods, like Little Haiti. But even so, compared to the corporatization of space in places like New York, Miami maintains a distinct edge. Ahead of the city’s busiest art season, we caught up with eight Miami artists to learn why they’re inspired to work in Miami year-round, and what they’ve been up to lately. 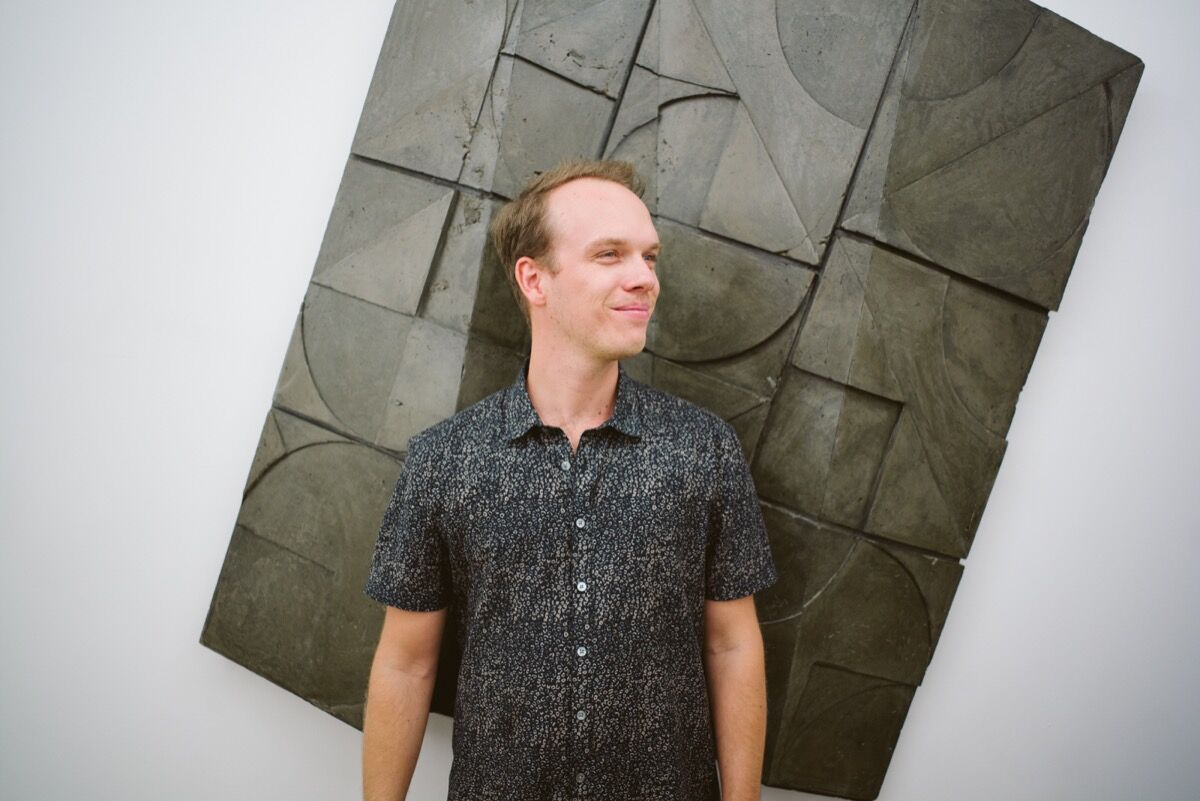 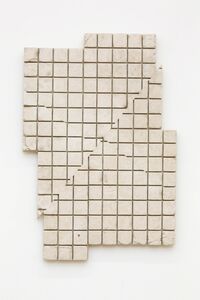 5 Images
View Slideshow
Miami native Moore feels totally invested in the city and its interconnected community. “An artist can do whatever they want here,” he says. “There aren’t a lot of external forces that dictate what kind of work should be made and that enables a kind of freedom that is hard to find in other cities.”
His work fluidly crosses between sculptural and architectural; he’s currently designing his own house. Many of his works for galleries, such as those shown with local gallery Nina Johnson, consider the structures of furniture—juggling ideas of function, form, politics, and social dynamics. “A lot of my work aims to break down perceived ideas of value based on materials and functionality,” Moore says.

Advertisement
Born and bred in Miami, Baxter sees the city as “a gateway into ‘the new world,’ where hundreds of cultures meet,” he says, noting that this is rarely found in the rest of Florida. And it benefits the art scene. “There is always room for experimentation, odd spaces to hold events and exhibitions, and not too many rules and roadblocks to prevent experimental or wacky ideas from flourishing,” he explains.
Baxter, who was included in this year’s Manifesta 11, makes work that combines media and aesthetics. His recent show at Nina Johnson included his own handmade surfboards and figurative driftwood sculptures. Baxter has also worked successfully with drawing, painting, performance, and music. The unifying forces across his works are direct links to science, geometry, spirituality, and intuition. 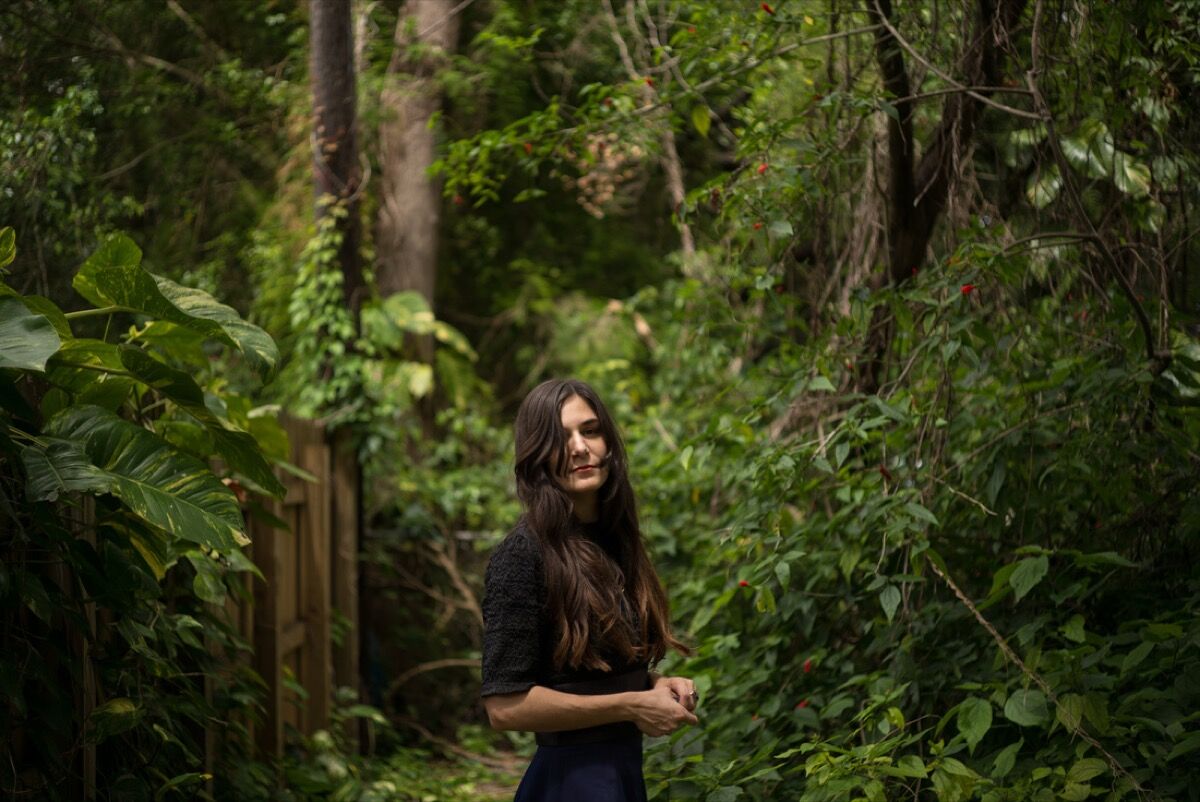 Portrait of Jillian Mayer by Gesi Schilling for Artsy.

3 Images
View Slideshow
For Mayer, who was born and raised between Miami and nearby Fort Lauderdale, the highly multicultural city creates opportunity. “There is a great intrinsic sense of collaboration and it doesn’t feel hierarchical or too exclusive like I’ve seen in some more established cities,” Mayer says.
Her work spans sculpture, installation, online projects, performance, and video; and she also works as part of the Miami-based film collaborative Borscht Corp. Mayer focuses on human experience and the digital world, and how we can modify, shape, and contextualize our identities. Her “Slumpie” series, sculptures that facilitate resting while use a smartphone (on show at Perez Art Museum during Art Basel in Miami Beach), points to our strong relationships with technology and the internet, and the interplay between marketing, art, and design. 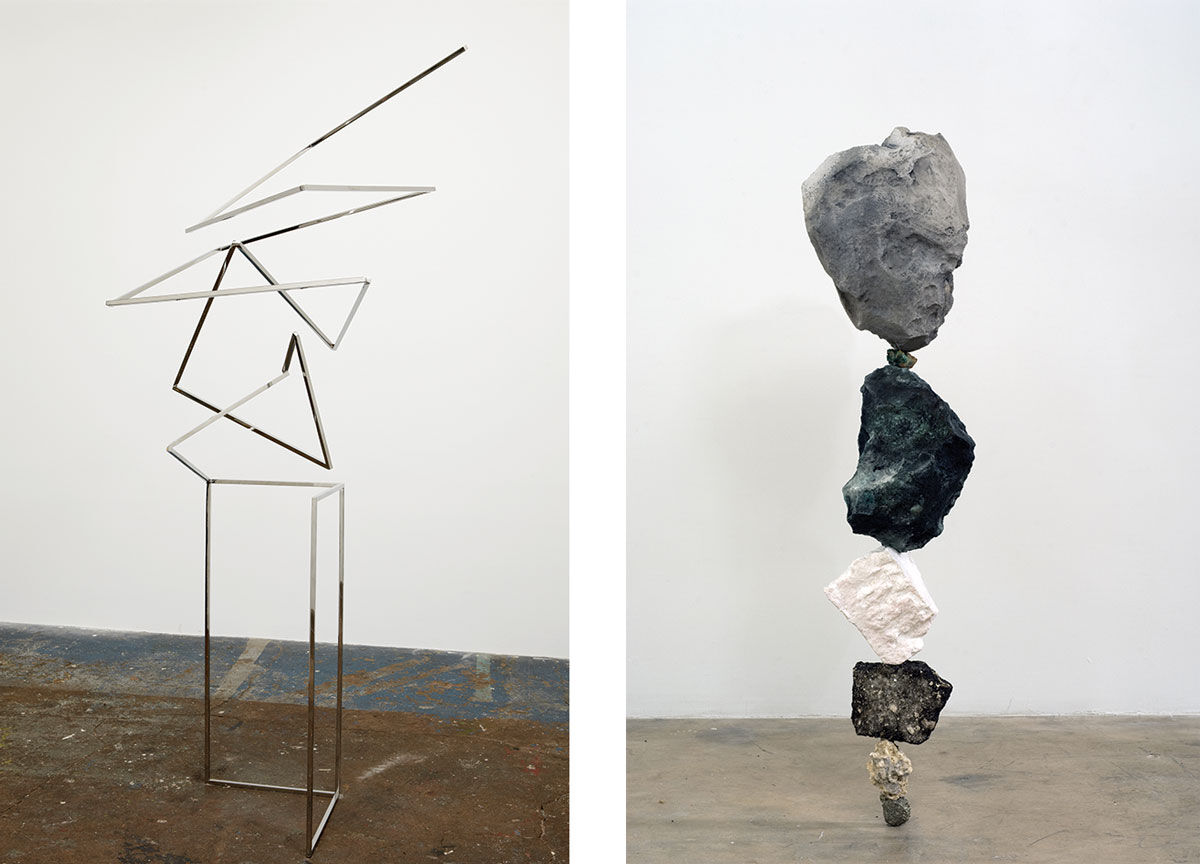 Oppel moved to Miami from Buenos Aires in 1991. “There is a palpable appreciation here for anyone pursuing projects which add to the growth of the city’s cultural foundation,” Oppel says of Miami.
With a practice ranging from photography to sculpture, his more recent metal sculptural works deal with ideas of domestic life. “I am interested in creating objects that convey this push and pull narrative between modes of production and their implications, that explore the symbolic relativity between representation and abstraction, between defining truths and fictions, and the fluid states of being in between,” he explains. His current influences range from
Bill Traylor
to
Richard Prince
, raw concrete to dark sandstone. Underneath it all is an exploration of the fluid, ever-changing element of time.

Monteavaro came to Miami from Cuba in 1973 at the age of two. “This city is my home,” she says. “Everything is about 30 minutes away by car and getting to Disney World will take you four hours. The music scene is amazing.” She creates installations filled with ephemera, light, and music inspired by pop references from Disney theme parks to the English singer Adam Ant. “Disney’s dark rides are basically extravagant installations that move you through the environment,” she says. “One of the main goals I have with my work is to evoke a similar sense of wonder.”
With her somewhat quirky approach, Monteavaro flourishes in the city. In addition to showing with local gallery Primary, recently she showed at Art at Work, an exhibition space in an orthodontist office waiting room, and Faena Art selected her to create a site-specific installation in the Casa Claridge’s hotel elevator. 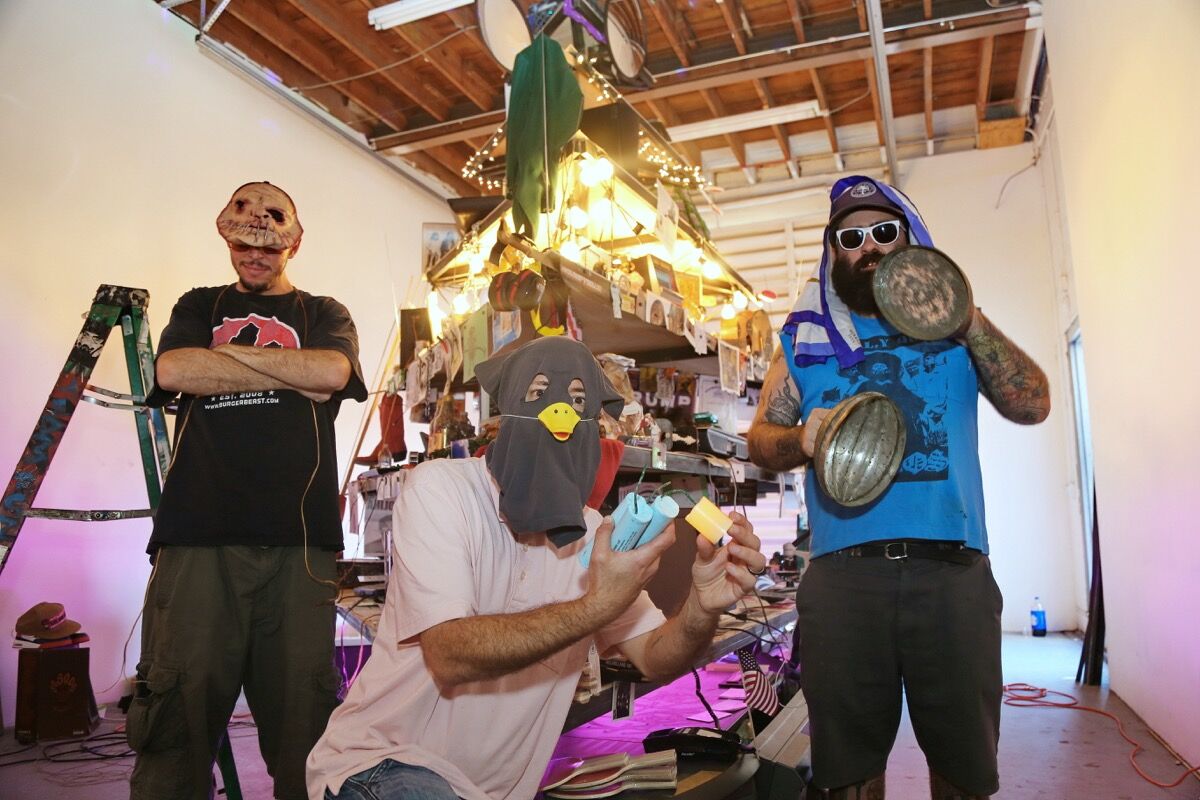 Portrait of Huffer Collective by Jipsy.

The three artists who make up Huffer Collective were born and bred in the city, and couldn’t be more enthusiastic about it. “We bleed Miami,” they write via email. “We defend Miami. It is the greatest city in all of existing planet earth civilization.”
Working somewhere between performance, installation, and provocation, Huffer Collective have been known to mount projects in unusual and unexpected spaces, like dumpsters. “They are filled with possible treasures,” they say of such works. During Art Basel, they open a new exhibition, “SAVE YOUR SELVES” at Locust Projects (one of the city’s strongest project spaces), and will stage a performance at ArtCenter/South Florida. If Art Basel represents the art establishment, Huffer Collective is the Wild West. 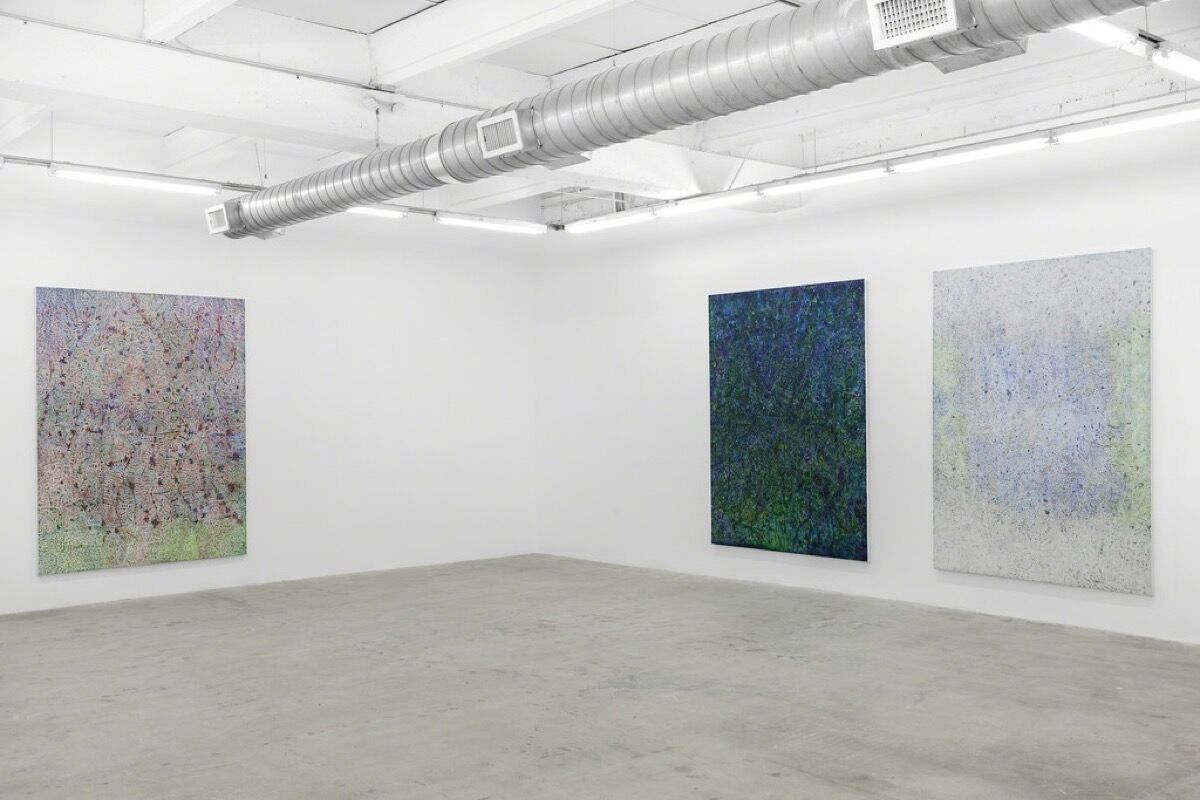 Installation view of “Tomm El-Saieh: The head and the house.” Courtesy of Michael Jon & Alan.

El-Saieh was born in Port-au-Prince, Haiti, and has been living between there and Miami since 1996. His Afro-Voodoo-Jazz musician grandfather Issa El-Saieh opened one of the first galleries in Port-au-Prince in the early ’50s and became one of the most celebrated patrons of Haitian art. “Miami is very special for many immigrants like myself, a lot of us came here as refugees,” he says. “I guess the open spaces, the light, its multiculturalism… All seems to collapse into each other and somehow those aspects are what sustain my relationship with the city.”
El-Saieh’s practice is based on a fundamental approach to painting. “This physicality moves me beyond the threshold of the canvas and its frame,” he explains. “I relate to the vitality and vibrancy of a medium that constantly challenges me and itself.” For him, abstraction reflects his sense of remoteness from his Haitian, Palestinian, and Israeli roots. The results are canvases with a unique, textural use of colour, which were recently shown at Michael Jon & Alan. 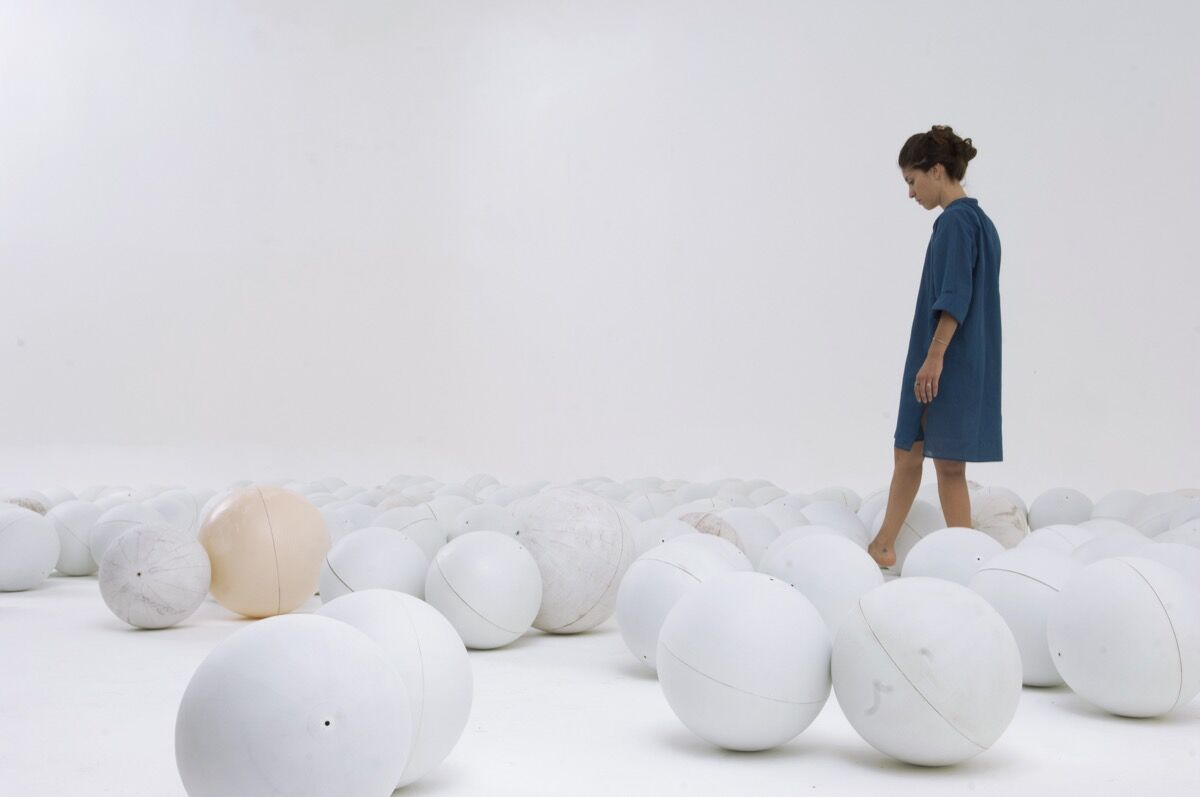 Portrait of Agustina Woodgate with Ballroom (2014). Courtesy of Spinello Projects. 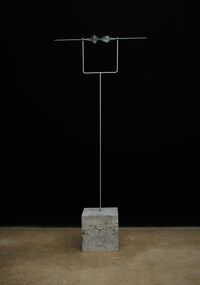 5 Images
View Slideshow
Woodgate moved to Miami in 2004 after graduating from the Universidad Nacional de las Artes in Buenos Aires. “My first years in the city were very much about adapting to a new language, culture, and political system,” she explains. “Miami is my Northern hemisphere base.”
Much of her work is a critique on structures of a globalized, capitalist society. This ranges from sculptures to a nomadic radio broadcast radioee.net, focusing on mobility, migration, and transportation. Her latest exhibition at Spinello Projects is comprised of installations of clocks and hourglasses that explore ideas of labor and value. Woodgate’s works reveal the systems that structure society.
Francesca Gavin
Related Stories