From a Bank Vault to a Deli, These Young London Gallerists Are Finding Room for Art Where You’d Least Expect It 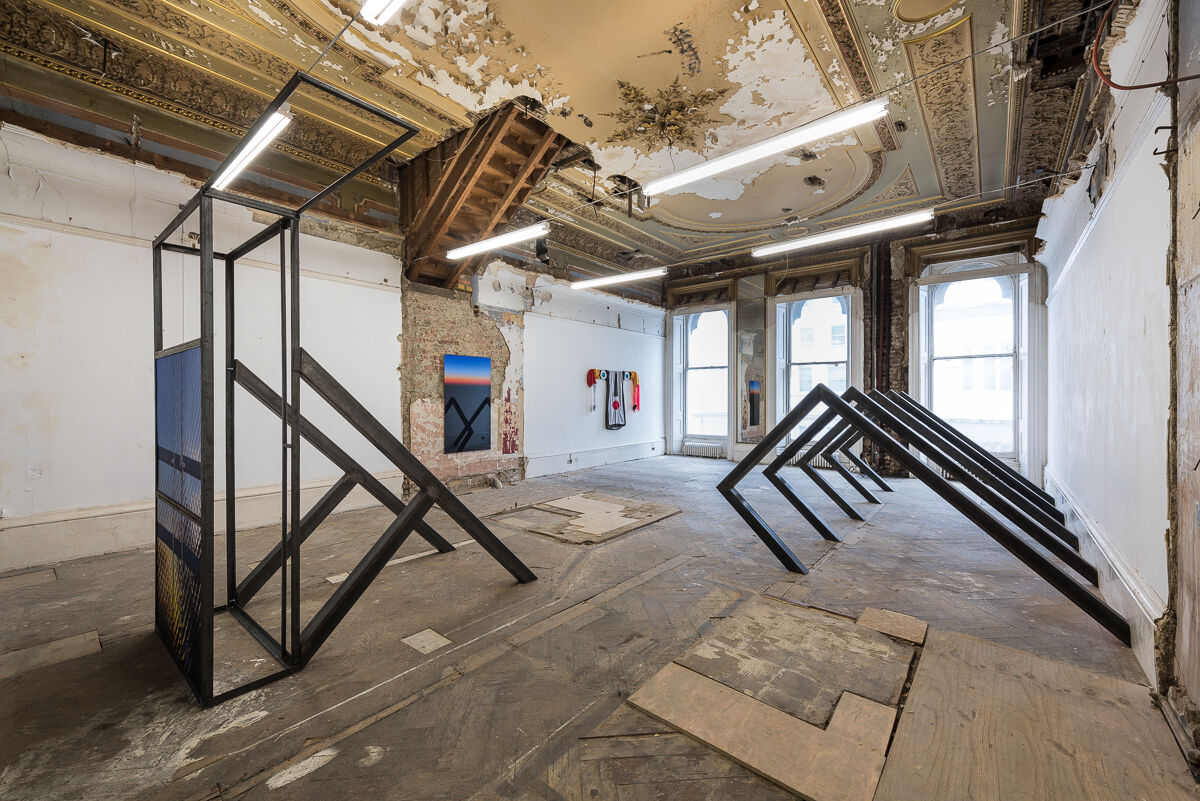 “It only lasted 10 days; we had to run generators off the roof, and it was incredibly cold,” says the young curator Alex Meurice, who works under the moniker Slate Projects. He’s describing the revelatory project, staged in an abandoned villa opposite the Victoria and Albert Museum, through which he uncovered the untapped potential for showing art in West London’s empty mansions. “There were lots of problems, but we had a very positive response.”
Unable to afford even the small, short-term warehouse spaces in the once-affordable East London, it was a galvanizing moment for Meurice when he realized that much larger, grander properties might be available further west, and so he began an active search. He came upon the Averard Hotel, a hulking slab of white stucco a stone’s throw from Hyde Park, by chance, through an advert on the online listings site Gumtree. Unbeknownst to the hotel’s owners, the posting was made by an errant employee who was hoping to make a quick buck on the sly. The property was in a transitional moment, awaiting its demise as luxury apartments go up in its place, and fortunately, the owners eventually saw the gains (read: hard cash) to be had by renting out the space to Meurice. “It’s not something they’d ever thought about,” he notes, “so there was quite a long process of explaining that we weren’t crazy.”
Meurice’s story resonates with the experiences of several other young gallerists navigating London’s art scene at present, who are turning property speculation to their advantage. While the prospect of renting out a sleek, glass-plated gallery in St James’s or Shoreditch is a pipe dream for most, these individuals have found what might be a way to hack the system—transient art programs run out of buildings left vacant or earmarked for redevelopment. 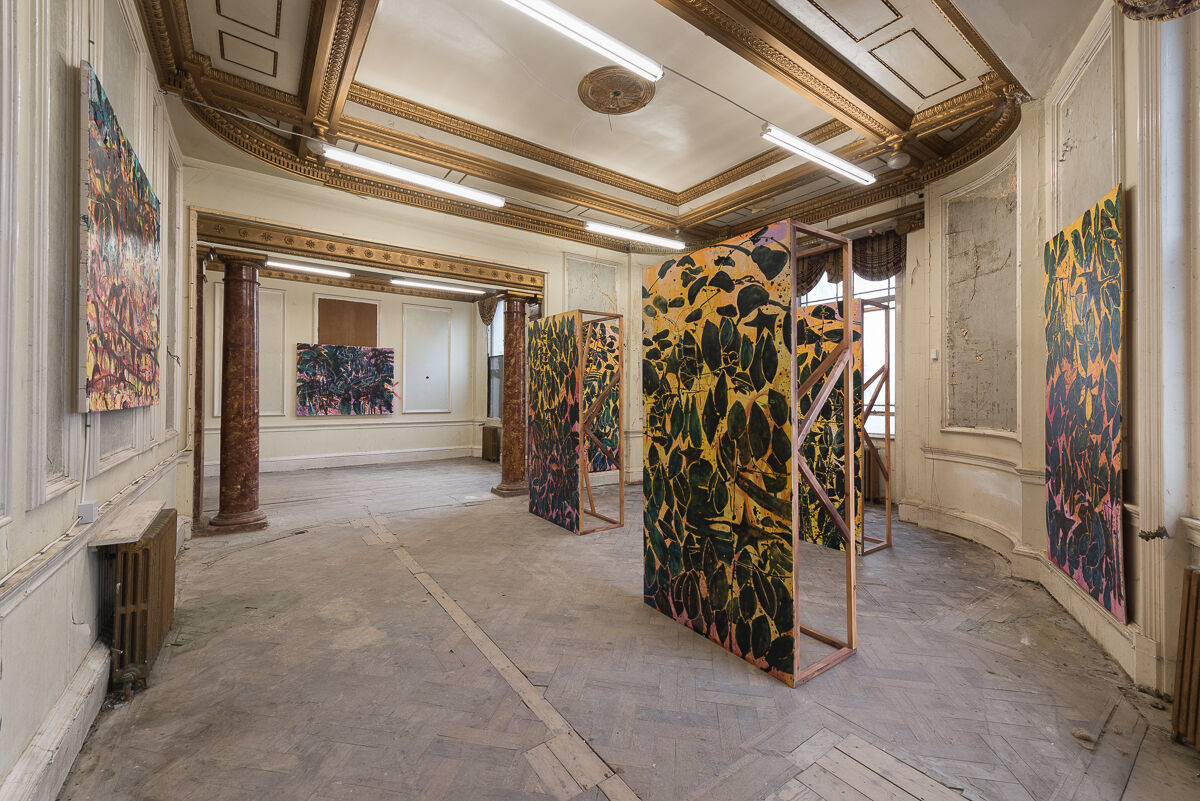 The interior of the Averard Hotel is extraordinary—the definition of faded grandeur. As one wanders from room to voluminous room, many bedecked with elaborate plasterwork ceilings, paint peels, and water drips, footsteps echo across rough floorboards. The hotel’s atmosphere alone has proven to be a draw to big-name artists—
Richard Wentworth
was featured in a recent exhibition, while the current show, curated with Bianca Baroni, features in-demand artists
Becky Beasley
and
Lawrence Lek
. And even though the closure of the space is an imminent reality—its final day will be October 31st of this year—Meurice is sanguine. It’s had its challenges as well as its triumphs. “I couldn’t do another winter in the hotel,” he says, “it’s just too cold—colder inside than outside.” But he’s found the inherent ambiguity of a non-gallery exhibition space to be productive—the combination of contemporary art and crumbling architecture confounds people’s expectations. Now looking for another space, in London or further afield, he wouldn’t consider a purpose-built gallery.
Exhibitions at the Averard Hotel have been a positive presence in the community as well, Meurice notes. Locals were pleased to see an unoccupied building, a now-familiar sight, as West London’s mansions increasingly function to accumulate capital for investors as often as they house families, brought back to life. More than anything though, he sees occupying buildings like this as a way out of the bind of the commercial gallery model. By hiring spaces out for one-off events, he’s able to cover his costs, and to make creative decisions without the looming pressure to sell work.
This model of short-term challenges offset by longer-term gains is also invoked by Cornelia Marland, who runs Geddes Gallery together with Alice Bygraves in Kings Cross. Their program occupies a former Italian deli, once beloved by local residents, who were not quick to embrace the building’s new function. “People loved coming in here,” says Marland, “we had to make it very clear that we didn’t kick [Leo, the deli’s owner] out. He chose to retire!” Keenly aware of the role of art in gentrifying erstwhile down-at-heel areas, Marland points to the family-focused activities the gallery runs to engage the local community. “I think it’s hard to come into an area and say ‘this is now an art space, we’re here now, we’re bringing our people,’” she reflects, and also notes that local businesses have played an invaluable role for the gallery, from fixing leaky roofs to providing drinks for openings.

Advertisement
A visit to Geddes Gallery—with its former shop fittings redolent of a bygone era largely still intact—suggests that the unique setting is an important factor in the gallery’s success. And like Meurice, Marland curates with the architecture of the building in mind. While the Averard Hotel’s high ceilings and ornate 19th-century fixtures sit well with art that deals with questions of imperialism, luxury, and economics, the outmoded and anachronistic “village shop” feel of Geddes Gallery compliments art that engages with ideas of the domestic. Exhibitions typically also make use of the apartment above the shop, where one finds an ancient sofa and a near-fossilized stove—unremarkable objects that manage to effect a sense of poignancy through their abandonment. For a recent show, artists
Robert Rush
and Rose de Borman filled the kitchen (even the oven), with ceramic foodstuffs in a play on abundance.
Geddes Gallery differs from Averard Hotel, though, in its operations—artists pay a hire fee to cover the costs of their exhibitions. Works on show generally don’t sell, in part because much of it is made in response to the space itself, yet Marland sees the current model as an experiment that will evolve. Both Marland and Bygraves currently work other jobs, and they acknowledge that a shift to more saleable shows is necessary for the gallery to be sustainable in the long term. Like the Averard Hotel, the building will be returned to the property developers this year and the gallerists will look for a new home for Geddes, ideally nearby.
While hard work and determination are clearly key to setting up an independent art program, chance also has a hand in the proceedings, particularly when it comes to finding a space. Gabriella Sonabend, who now runs The Koppel Project, an art space in a disused bank vault, developed her program after an impromptu meeting with her future mentor. “Although I always dreamed about running my own space and had many conversations about how my ideal space might be, I didn’t intend to start a gallery; I wasn't even looking for a space,” she recalls. Gallery owner and educator Gabriel Gherscovic changed all that when he took over the lease for a building on Baker Street and asked Sonabend to submit a proposal for creative use of the seemingly unusable bank vault in the basement. 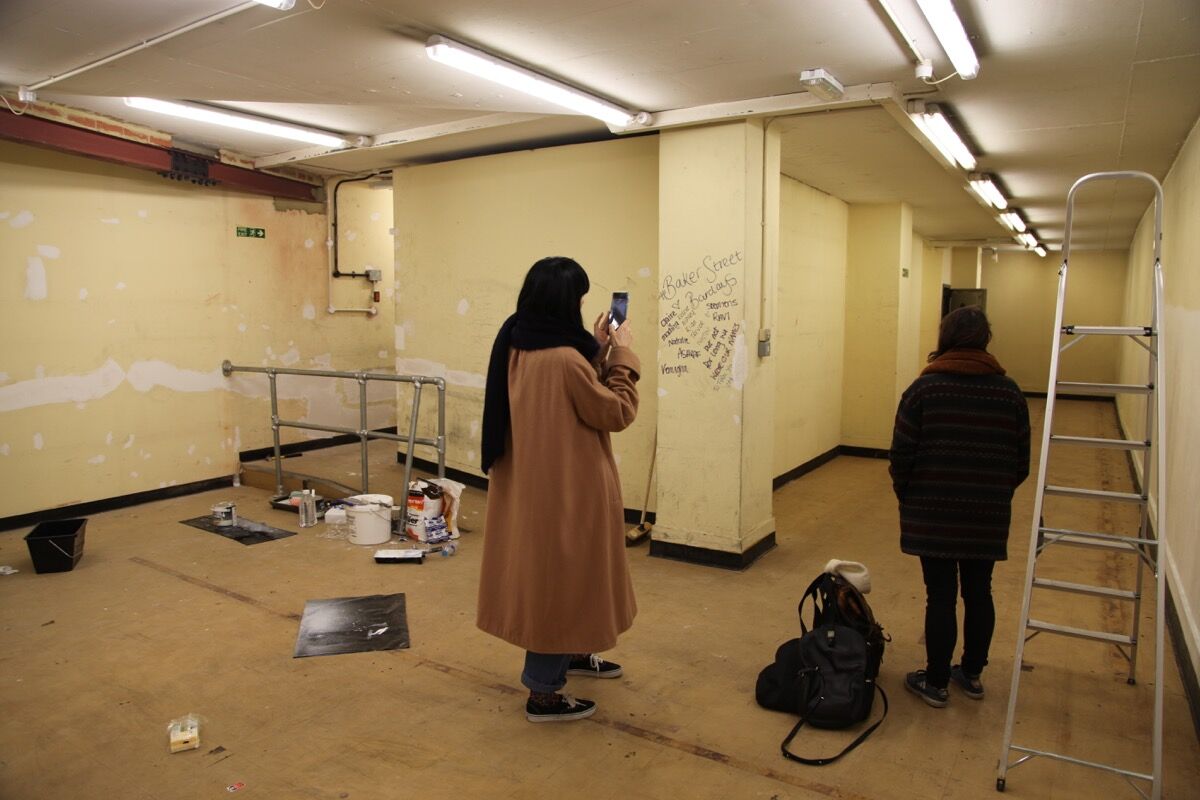 Though the space presented significant challenges—“the first time we tried to drill into the walls we realized we’d need a bank heist-style drill bit to penetrate the heavily reinforced vault walls”—Sonabend sees the architecture as a perfect mirror to her curatorial style, which she shares with collaborator Hannah Thorne. The labyrinthine layout proved to be an elegant match for their narrative-led exhibitions. Fittingly, for a project run out of a bank vault, The Koppel Project is built on a sustainable business model, with exhibitions funded by sales as well as partnership with a cafe and a Phaidon bookshop (the only London outlet is hosted by the gallery), both of which occupy the ground floor of the building.
As these models exemplify, an openness to unusual—bordering unusable—spaces can lead to unique exhibition programs that gleefully deviate from the template that many London galleries employ. This kind of creative opportunism means finding space where one can, and results in programs popping up in areas not previously colonized by galleries, diffusing their distribution across the city. Though these exhibitions may match their settings in their idiosyncrasies, budding, fresh galleries offer young artists memorable, inspiring surroundings; shows are most successful when they respond directly to their locations. By occupying spaces caught in the tide of redevelopment, these programs offer vantage points from which to comment on the housing bubble, a phenomenon that impacts the art world, dictating where artists live, have studios, and show their work. The uptake of these unlikely spaces, whether by choice or necessity, can pay dividends both to an art-going public tired of generic exhibitions and to gallerists eager to find curatorial freedom and challenge new contexts. Sonabend may capture the spirit of these programs best: “I would rather work with a bank vault than a white cube any day.”
Laura Purseglove
“Maybe your lens is scratched?” is on view at the Averard Hotel, Jun. 24–Jul. 24, 2016.
Related Stories