This L.A. Delivery Man Amassed One of the World’s Largest Collections of Chicano Art 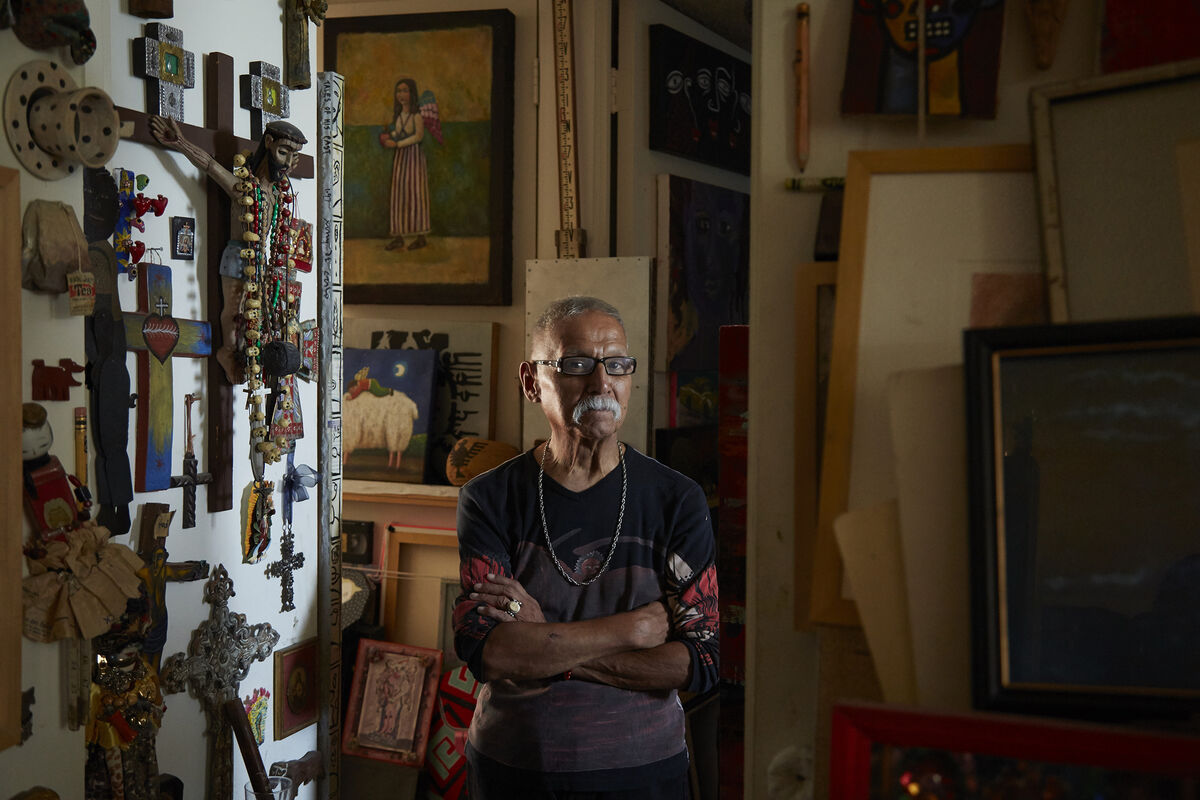 Advertisement
In the fall of 2000, the Santa Monica Museum of Art hosted “East of the River: Chicano Art Collectors Anonymous,” an exhibition surfacing several sprawling collections of Chicano-made ceramics, paintings, and works on paper. (Chicano/a is a term for a Mexican-American that has politically radical origins in the Latino branch of the civil rights movement, which largely took place in the Southwest.) All seven of the private collections that contributed work to the show were otherwise permanently on view in the collectors’ respective homes. Two of those homes were partially recreated for the show—furniture, rugs, and all—in order to display the art in its usual habitat. “Like home movies,” the Chicano studies scholar Alicia Gaspar de Alba wrote at the time, these collections “reflect and display the identity of the people that reside in the home as much as the work of the artists.”
It is hard to imagine that there is someone who brings this theory to life more vividly than Enrique Serrato, a 74-year-old Los Angeles county native whose 6,600-object collection currently lives in his modest two bedroom apartment in the city of Whittier, 12 miles southeast of Downtown L.A. When I visited him there earlier this month, on one of southern California’s infamously searing early autumn days, the sunlight in the shade-free San Gabriel Valley was bright, blunt, and beige. 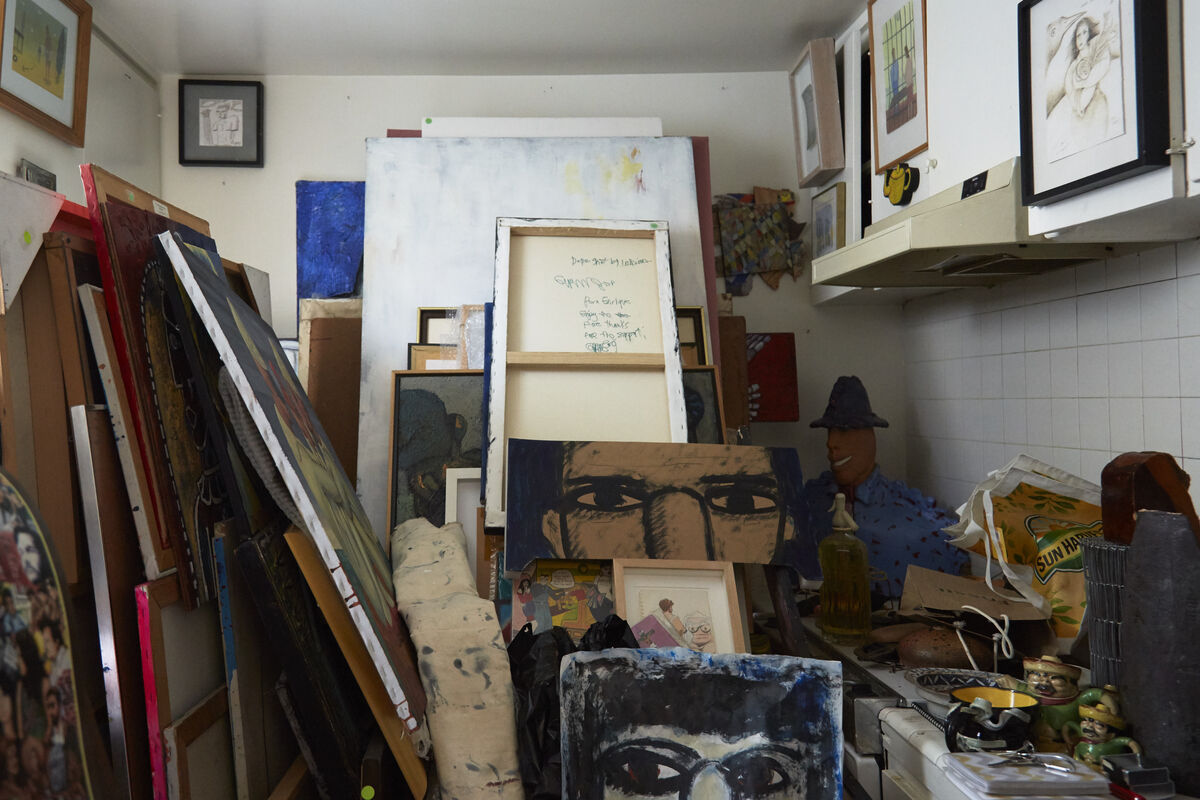 By comparison, the inside of the house was another world. Serrato’s bedroom is too crowded with work to allow for a bed, so he sleeps on the floor. His kitchen cupboards are filled with ceramic sculptures, not tableware. As we settle into the apartment’s only two chairs, the collector jokes that José Lozano, a Chicano painter who has over 100 pieces in the collection, is angry that his work lines every inch of the bathroom walls.
Serrato has spent his whole life in this region—first in El Sereno, then in Newport Beach, and finally in Whittier, where his parents settled after emigrating from Mexico. His father worked on the railroad in Pasadena for five dollars a week, saving money to start, in 1922, what became a very successful meat market in East Los Angeles. The younger Serrato spent his career there as a butcher, delivery truck driver, and manager, but his life’s work is his art collection. He started it “on a shoestring” at age 16, paying a few dollars down and a few dollars a week for pieces that he found in local galleries. Ceramics and bargains were his first passions and arguably remain at the core of the collection. But he also acquired works by such respected Southern California ceramicists as Doyle Lane,
Beatrice Wood
, and
Harrison McIntosh
when it was still possible to do so for one- or two-figure prices. 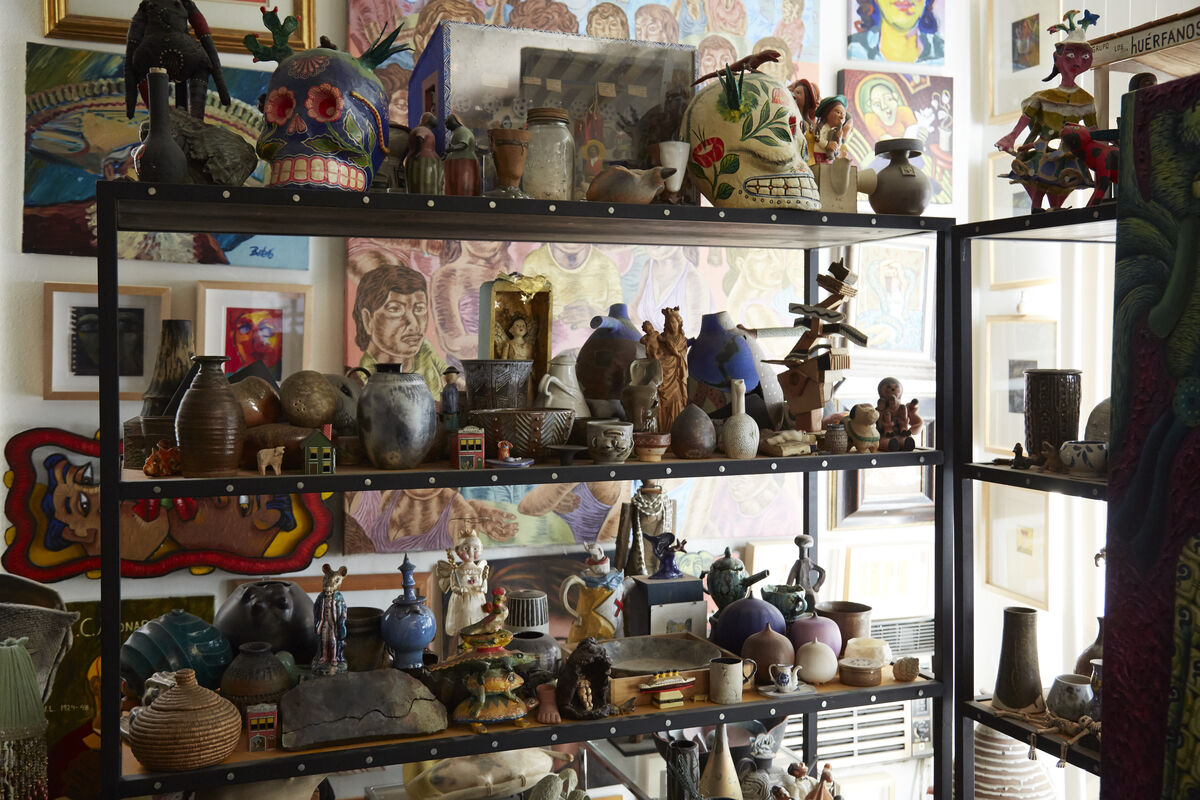 In his fervor for art and ambition to earn enough to buy it, Serrato felt isolated in and alienated from his community. He didn’t relate to his Mexican-American colleagues at the meat market, and he often found himself judging them harshly. “I thought I was the only Chicano collector around,”says Serrato. Pieces by Latino artists did not generally find their way into his cache early on; though he says he was always drawn to
outsider art
. That changed when he met Margaret Garcia, a Chicana painter whose fingerprints are all over the East Los Angeles art landscape. They talked for 14 hours straight on the first day they met, and she introduced him to the work of six Mexican-American artists. “If it weren’t for her, I wouldn’t have collected Chicano art at all,” Serrato says. “That was how I felt about my own [people].”
Chicano art was born in the ’60s as the visual representation of a set of political and social demands known as “El Movimiento.” Its practitioners were focused more on community-building, consciousness-raising, and affirmative empowerment than on the formal concerns that occupied the mostly-white American modernist and conceptual artists of the time. Often designed to be educational and widely accessible, Chicano art takes cues from the Mexican artistic ideologies of the post-Revolutionary 1920s and ’30s that produced
Diego Rivera
,
David Alfaro Siqueiros
, and
José Clemente Orozco
. (At the time, “los tres grandes” as they were called were commissioned to make massive, politically loaded public artworks that tended to promote nationalism and the new government.) It incorporates ideas and aesthetics from pre-Hispanic sculpture, American pop art, Mexican folk art, Native American history, and contemporary political struggles. And it is frequently collaborative. For example, the centerpiece of “Los Four,” the first major museum exhibition of Chicano art which opened at LACMA in 1974, was a mural made collectively by Frank Romero,
Carlos Almaraz
, Roberto de la Rocha, and Gilbert Luján. The four artists formed the collective for which the show’s title was named; after the exhibition, Judithe Hernández joined as a fifth member.
Advertisement It is fitting, then, that Chicano art became a means for Serrato to feel proud of his heritage and engaged with his community. He bought works by
Gronk
, Luján, Garcia, Tony deCarlo, Lozano, and Lalo Alcaraz, and Joseph Maruska, among many others. He joined Chicano Art Collectors Anonymous or CACA, the group whose collections appeared at the Santa Monica Museum in 2000. “The main goal of the show was to highlight the passion and obsession at the heart of collecting Chicano/a art,” Gaspar de Alba explains. “Indeed, the CACA members consider their fascination for Chicano/a art a form of ‘addiction,’ as implied by their collective name: Chicano Art Collectors Anonymous.” The membership was mostly middle-class, and the driving forces behind their collecting practices were often identity and community politics. Validating the art by purchasing it constituted its own powerful act of social participation.
CACA meetings took place in the members’ homes, so they could survey each other's collections. Recalling the first time that the group came to his house, Serrato says, “I was a private collector who no one knew about. I lived with my parents in Whittier. They were shocked when I opened the door. They looked around and were like, we can’t believe this. Who are you?”
“I’m Enrique Serrato,” he replied. “And I’m an art collector.”
Emily Rappaport
Watch “Enrique Serrato: A Life Amongst Art,” by Patrick Kennedy, to learn more.
Further reading in Art Market 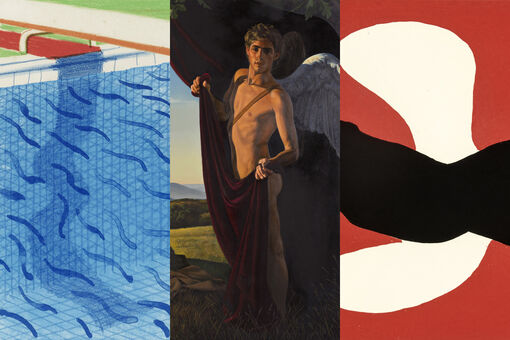