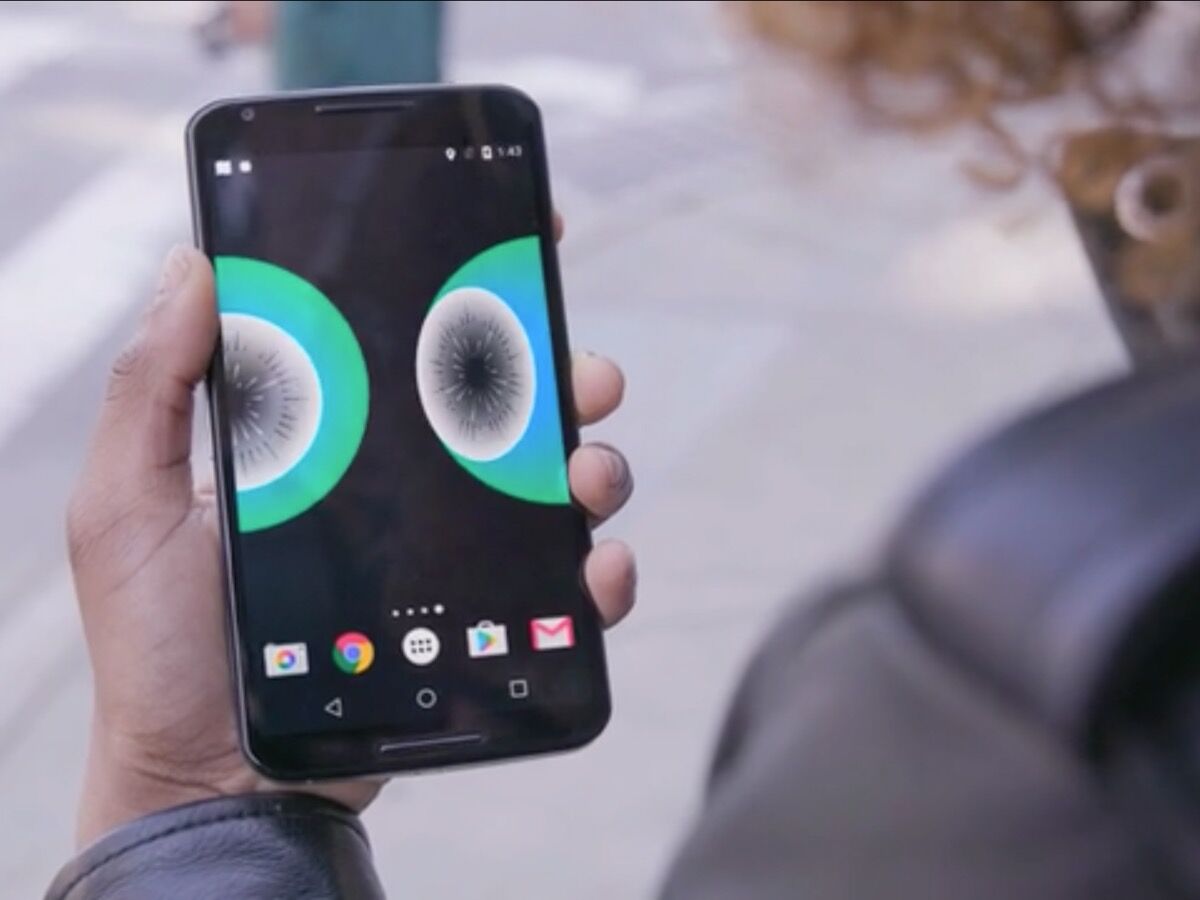 At first glance, New York-based artist and designer Ekene Ijeoma’s latest project presents a bit of a paradox: It’s an app on your phone that’s meant to get you off your phone. Not all the time, mind you—Ijeoma has focused his energies on one specific, crucial moment. He wants people to look up at intersections, to engage with other pedestrians as they cross a busy New York City street.
Synched with a NYC database that logs all crash injuries and fatalities, the app (called, appropriately, Look Up) uses GPS to determine when a user is nearing an intersection. As the user reaches the crosswalk, the app’s background image—two colorful, abstracted eyeballs—lights up and the phone begins to vibrate. The number of vibrations and concentric rings around the pupils of the eyeballs signal how many injuries have occurred at that given intersection. 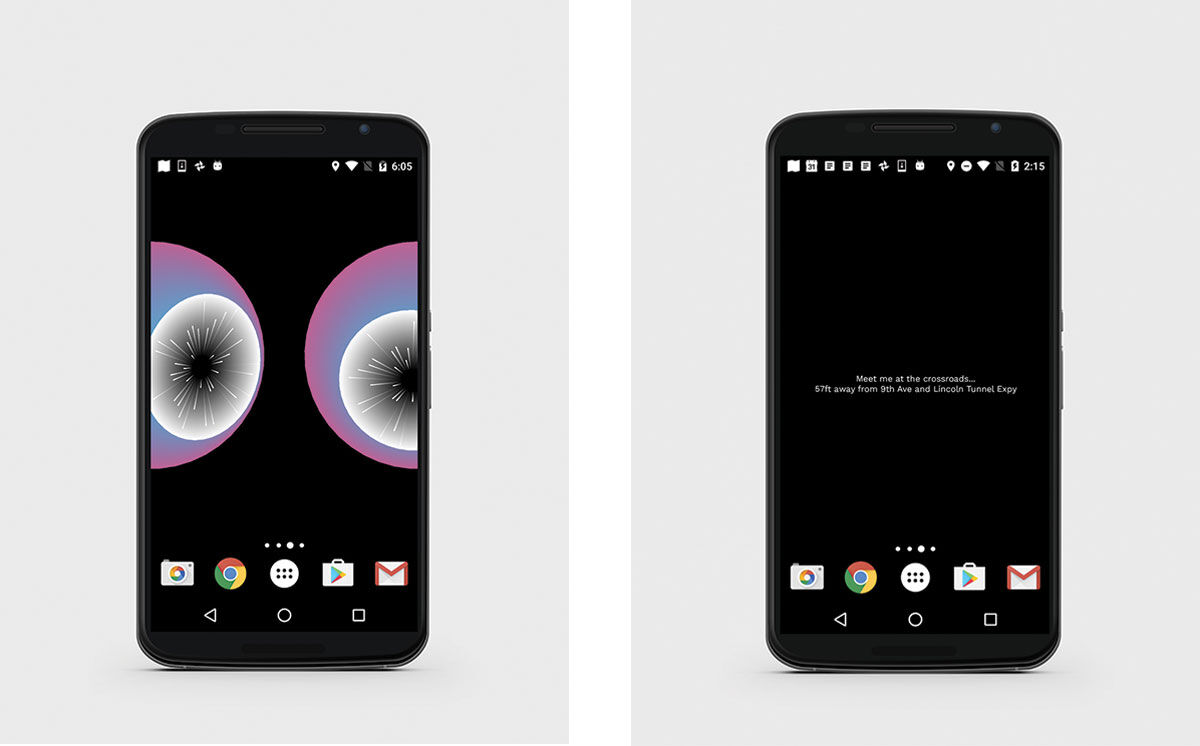 The project is about safety, certainly. But for Ijeoma, it’s also about empathy and energy. He wants to help preserve the essential vitality of the city that is lost, most obviously, when a car crash results in bodily harm. He sees a loss of energy in subtler ways, as well. “I’m always cycling, seeing people walking and looking down at their phone as if they’re somewhere else when they’re right in front of me,” Ijeoma explained. “Where is there a space in this city where we can just be aware of each other and the city itself?”
Walking while texting—or checking email, or, more recently, playing Pokémon Go—has become enough of an epidemic that even city governments have taken notice. In Australia and Germany, the response in two cities has been to install traffic signal lights into the sidewalks themselves, allowing pedestrians to traverse the streets safely without once looking up from their phones. A proposed bill in New Jersey, on the other hand, would impose a $50 fine and even potential jail time on those walking and using their smartphone simultaneously.
Ijeoma’s app is a third sort of approach—not scolding like New Jersey or accommodating like Australia or Germany. It’s a gentle reminder, helping to foreground an issue at the exact moment we should be thinking about it. In a way, he’s hoping to retrain New Yorkers. “I was thinking of it as sort of a ritual,” he said. “You have cultural etiquettes already. What if in New York City it was like ‘Hey, we’re going to make intersections a space for no phones?’” 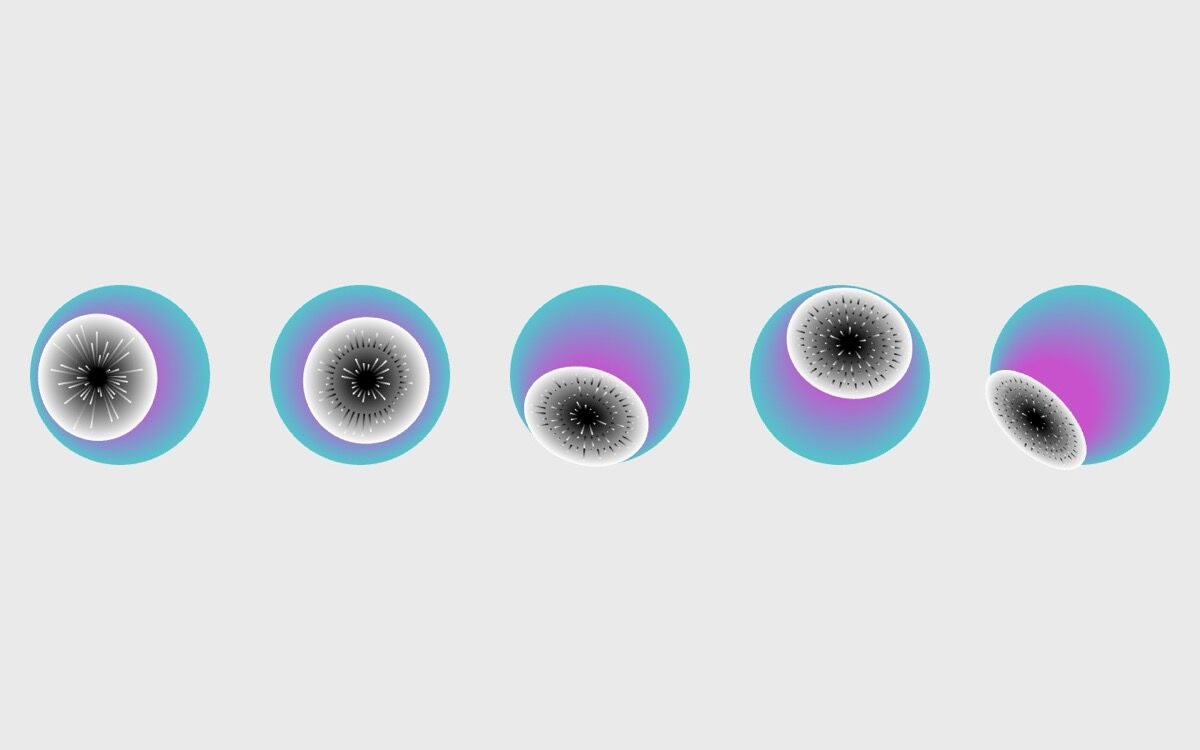 Advertisement
Look Up is the latest in Ijeoma’s series of data-driven, socially conscious art projects. Each one, he said, has become more subtle in its use of numbers. “I’ve just been trying to think about how to use data in more poetic ways. It’s so easy just to use the data, but it doesn’t always get people to think or question why the world is how it is and how we can change it.”
The app was realized with the help of Google Creative Lab as one of its Android Experiments, a series of projects meant to explore the boundaries of what a phone can do. Although Look Up is currently available only on Android phones, Ijeoma expects to release an iPhone version in August. And while the project bears some similarities to Ijeoma’s past work, Look Up marks the artist’s first foray into the world of apps. He said the marriage of art and smartphone tech has brought about its own challenges. “The problem is, when you begin to talk about apps, people want to know how you can measure it. How do you know how many people are looking up when they use this app? I don’t think you need to know.”
In fact, Ijeoma’s conception of the project extends far beyond the actual software. “You don’t even need the app to participate in the project,” he said. “It’s just instruction based. The app is just to prompt you to participate in that experience. It’s about what happens after you look up.”
Abigail Cain
Related Stories