This Organization Is Rescuing Artists and Scholars from Syria and Iraq

As instability continues in the Middle East, numbing us to reports of never-ending violence, the conflict boiling out of the region shows no sign of abating. While much has been made of the destruction of the great cultural heritage of Syria and Iraq (and rightly so), receiving less bandwidth are the consequences these upheavals will have for the ability to rebuild one day in the future. An optimistic note, however, comes in the form of an effort to save scholars and artists in those war-torn regions.
The Institute of International Education’s Scholar Rescue Fund (IIE-SRF) has been established to address the crisis in the region’s education sector: Universities and institutions in Syria and Iraq have been either forced to shut down, or must operate on cripplingly underfunded budgets. In many cases, academic staff must choose to leave or continue under increasingly difficult political and financial circumstances. Sporadic operating capabilities and a lack of resources make it hard for students to enroll, let alone study. Turkey may soon be facing a similar crisis if reports that 1,577 deans of Turkish universities have been asked to resign, along with the cancellation of 21,000 private school teachers’ licences, are true. No reason so far has been given, though doubtless it is part of further crackdowns by President Erdogan in the wake of last week’s failed military coup.
Furthermore, the Institute of International Education (IIE) conservatively estimates that there are roughly 100,000 university-qualified Syrian students currently living in Turkey, Jordan, and Lebanon as refugees. “While ISIS is destroying Syria’s fabled and archaeological past,” says Dr. Allan Goodman, President and CEO of the Institute of International Education (IIE), “the war is destroying the future of its arts. At the same time, we are hearing about artists and intellectuals who are continuing to generate new art in the context of the war.”
The Rescue Fund aims to enable these artists and scholars to continue their work, seeing them as key assets to the future rebuilding of their respective homelands. The organization is also providing support for students and staff currently residing in the wider Middle East. Over the last 14 years, the IIE-SRF has saved 650 scholars from 55 countries, including granting fellowships to 90 scholars from Syria—a program that moves them to institutions overseas. This year, Christie’s annual online auction, UNTITLED: Insider Art Show, has partnered with IIE-SRF to raise funds to support these scholars in exile. Of the 60 works on offer, eight are by three artists who have benefited from the organization’s assistance—Syrian interior designer and artist Dr. Joumana Jaber, Iraqi painter
Saddam al Jumaily
, and one who wishes to remain anonymous due to fears for his safety. 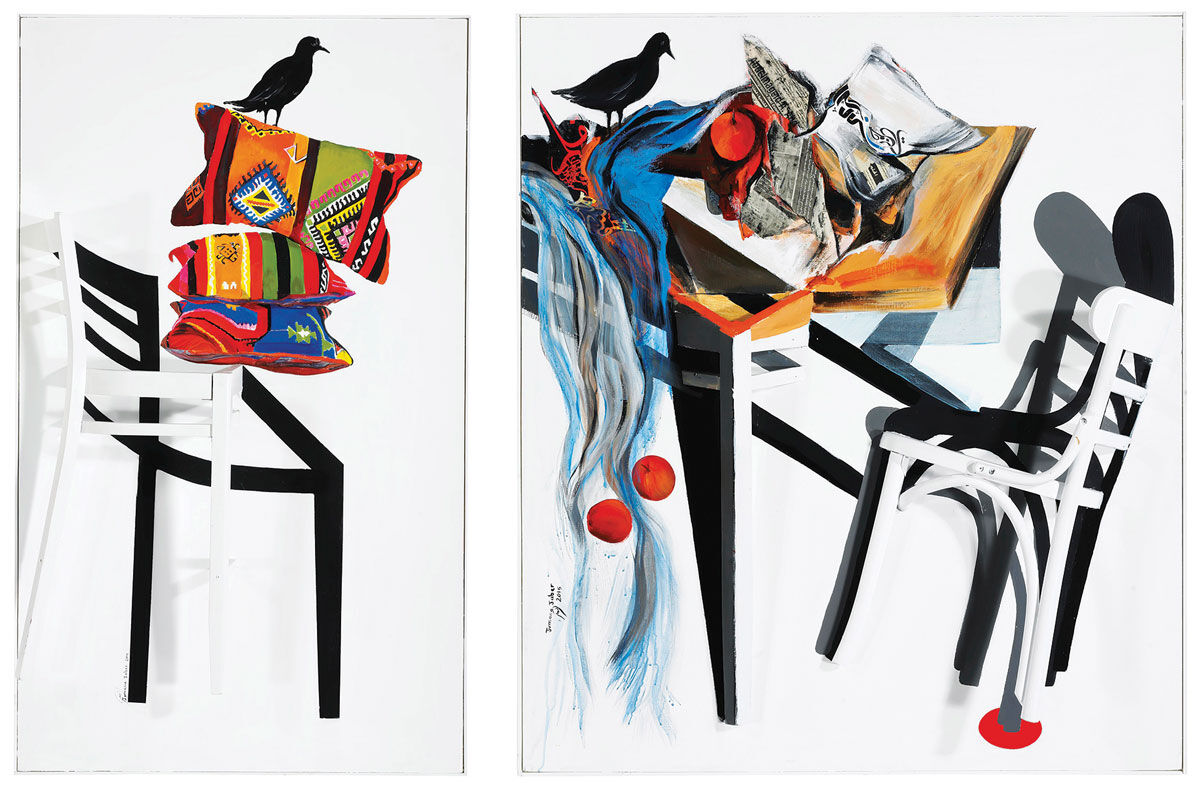 The total number of Syrian refugees is currently pegged at 4.8 million, as per a July 2016 report by the United State High Commissioner for Refugees. Of these, some 2,000 are displaced professors. The IIE estimates that less than 10 percent of these scholars have been able to continue their jobs. It’s a sobering thought. For the scholars that do make it out, complications arise due, in part, to the Lisbon Convention, which requires refugees to have their qualifications ratified in order to find work in their fields. For those who have lost their documentation in the process of migration, this can become very difficult.
For those who stay, the situation is just as bad, if not worse. “Living in Iraq became almost impossible,” explains al Jumaily, a scholar-artist who received his M.A. from the University of Basra in Iraq, where he went on to teach at its College of Fine Arts. He soon discovered, however, that some of his colleagues in the faculty had forged qualifications, and supported, or were members of, various dangerous militia and religious parties. The university’s administration, he says, was helpless to intervene.
“When I learned this, I wanted no part of it,” Jumaily says. Threats soon followed, and, along with his wife, he was forced to flee to Jordan. “The experience of leaving my family, my mother, my friends and community, with no money, was a tough experience. It was sad and painful, but it was better than being killed by a terrorist, and better than educating future killers or supporting radical religious thought,” he says. “I do not want to be an accomplice in the destruction of Iraq.”
For Syrian professor of arts Jaber, one of the 90 Syrian scholars supported by IIE-SRF, similar circumstances eventually forced her hand and led to her relocation to Montclair State University in New Jersey. “A distinct turning point was when my husband was kidnapped and my son’s friend was killed at the university,” she told me. Having studied in Poland, where she received her doctorate and lived for seven years, Jaber had returned to Syria and established one of the first theater and design undergraduate programs at the Higher Institute of Dramatic Arts in Damascus.
“Like most countries where dictatorships prevail, there is the repression of ideas and beliefs,” she says. “To criticize the status quo, its rules or beliefs, is a major crime.” Her work, while subtle, still brought her threats and defamation. “In Syria, as artists, our creativity was under captivity,” she says. “Since leaving Syria, I have become braver and more free in how I express myself. I do not want to leave room for interpretation. I want my work to be shocking and shed light on what is happening to human beings elsewhere in the world.” 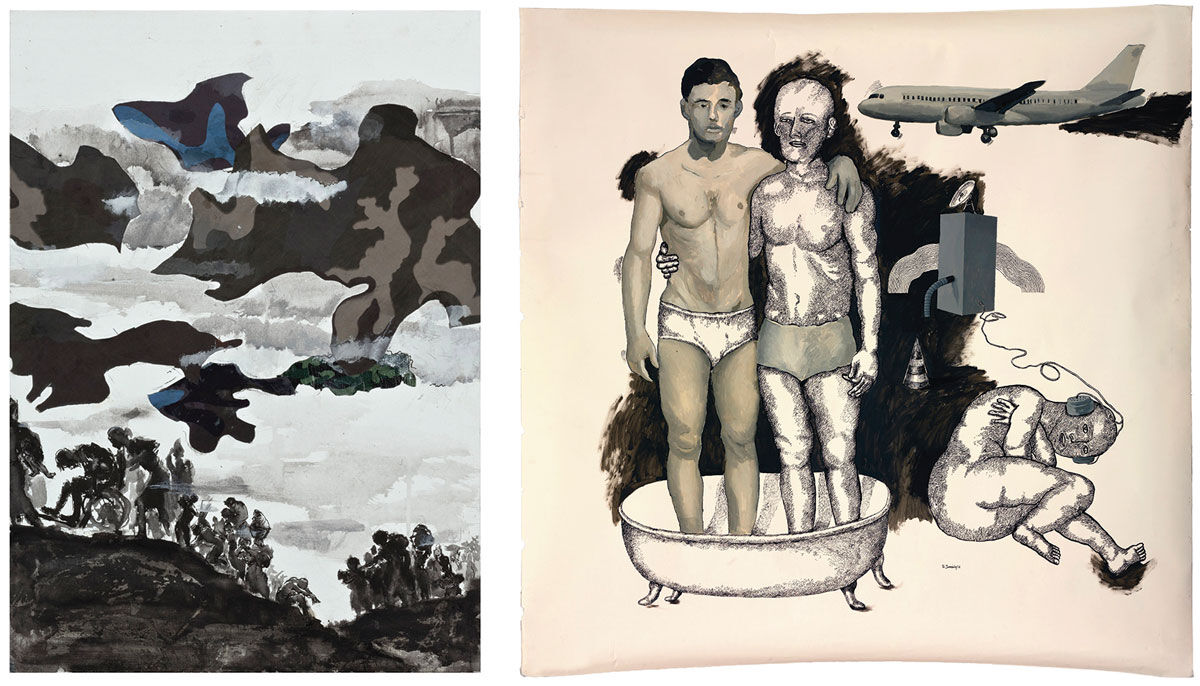 Advertisement
Today’s exodus from the Middle East makes a chilling parallel to the refugee crises wrought by World War II. “We saw in our work with the Emergency Committee to Aid Displaced European Scholars in the 1930s that these scholars were able to continue to produce important scholarly and artistic works,” says Goodman. “[It is important that] artists and intellectuals find safe havens to prepare them to return home when circumstances allow, or enable them to build healthy diaspora communities.”
For many, the promise of return is a source of strength. “I hope to return to the Iraq that I hope for, not the Iraq that we know today,” says Jumaily. “It is a crisis for any intellectual or human being to have to leave one’s home, especially at this stage in our lives,” says Jaber. “Our memories, identities, language, and culture—50 years of life are left behind. However, how can a place that holds no security, justice, or rights be one’s home? I am trying to build a new home with intention and awareness, a home with safety, freedom, and justice. I believe this is the way forward.”
Anna Wallace-Thompson
Related Stories