This Program Has Turned 6,000 Newborns into Art Collectors 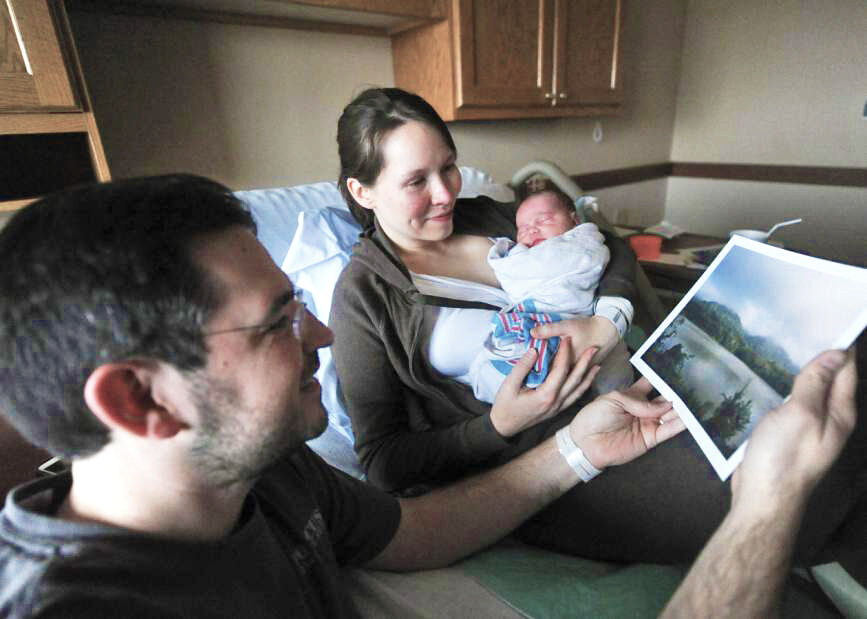 Danielle and Joshua Karlovich along with their son Michael looking at Aaron Blum’s Mist over the Ohio. Photograph by Randy Jarosz for Pittsburgh Tribune Review. Image courtesy of Start with Art.

In 2006, while working as an adjunct professor in Pittsburgh, photographer Matthew Conboy was surprised to learn that the majority of his students had never visited the city’s world-class art museums. “Pittsburgh has a wealth of art museums—the Carnegie, the Andy Warhol Museum, the Mattress Factory—and they weren’t taking advantage of these opportunities,” he recalls. Around the same time, with the Pittsburgh Steelers en route to the Super Bowl (they won), the city’s hospitals were gifting newborn babies yellow rally towels, lovingly known as Terrible Towels, the kind fans enthusiastically wave in the air during games. “I put that into the back of my head, thinking about this gift and thinking about my students, who probably had a closet full of these towels by the time they reached college,” Conboy says. In the years that followed, keeping the hospital gift in mind, he developed a project that would engage Pittsburgh residents in the city’s art scene while also supporting local artists and exposing their work to new audiences. The result, born January 1, 2015, is Start with Art, an initiative that gifts newborn babies a limited-edition photography print by a Pittsburgh artist.
“I’m using a model that hospitals already had—giving these gifts, whether it’s a Terrible Towel or diapers or baby food, to new mothers and fathers and their babies—and using art instead,” Conboy explains. He works with 12 local artists per year, devoting one month to each artist’s work. Each month, after running off some 275 to 350 prints at his studio (with a printer donated from Epson), he delivers them to three area hospitals: Midwife Center for Birth & Women’s Health, St. Clair Hospital, and UPMC Mercy. Conboy says the hospitals agreed from the get-go to bring on Start with Art. Over the past two years, he has delivered art to some 6,000 babies, essentially making them art collectors from day one. 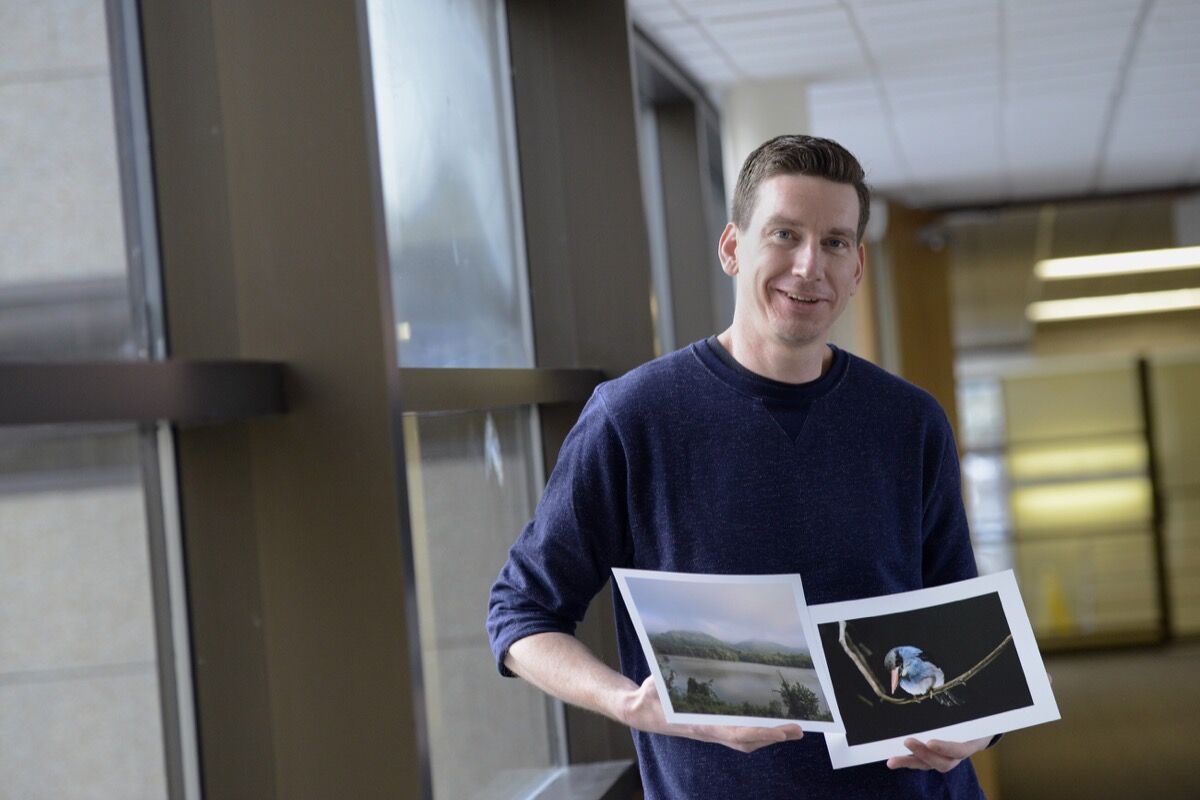 Photo courtesy of Start with Art.

Conboy’s dedication to a new generation of art lovers is matched by his commitment to Pittsburgh’s artists. “I was thinking about how difficult it is for artists to engage new audiences, and the one demographic that I figured out couldn’t say ‘no’ was babies,” he says. “They kind of have to take that gift.” While Conboy holds an MFA in photography, his own multidisciplinary approach led him to expand the scope of the project beyond just photographers. Other artists he has partnered with thus far include printmakers, embroiderers, and even a poet, each receiving a modest honorarium.
“I’ve been working with a mix between artists I was already familiar with and people whose work I respect but maybe didn’t know personally,” he says. Before any artist takes on the project and submits a photograph, Conboy meets with them one-on-one to discuss Start with Art and to ensure they will be fully invested. He also provides a small note of direction. “I tell them not to pander to the babies. I want these babies and the families to enjoy these works as much today as in 30 or 50 years,” he says. “It doesn’t need to be a duckling or a lamb, it doesn’t need to be in pastels. I want it to be a serious piece.”
As such, artists are granted freedom in style and subject matter for the work they contribute. “It ranges from landscapes to abstractions to extremely conceptual artworks,” Conboy explains, pointing to a print featured this December that portrays a sculpture created in the woods by Danny Bracken. Artists can choose to share an existing work or create something new, a decision that often inspires artists to venture beyond their existing practices. “Some enjoy going out and creating something entirely new, and that’s usually most common with people who aren’t already photographers,” he says, noting that some of the artists shot on film for the first time in these works. This past July, for instance, he worked with poet Jessica Server, who included a printout of one of her poems in her photograph. 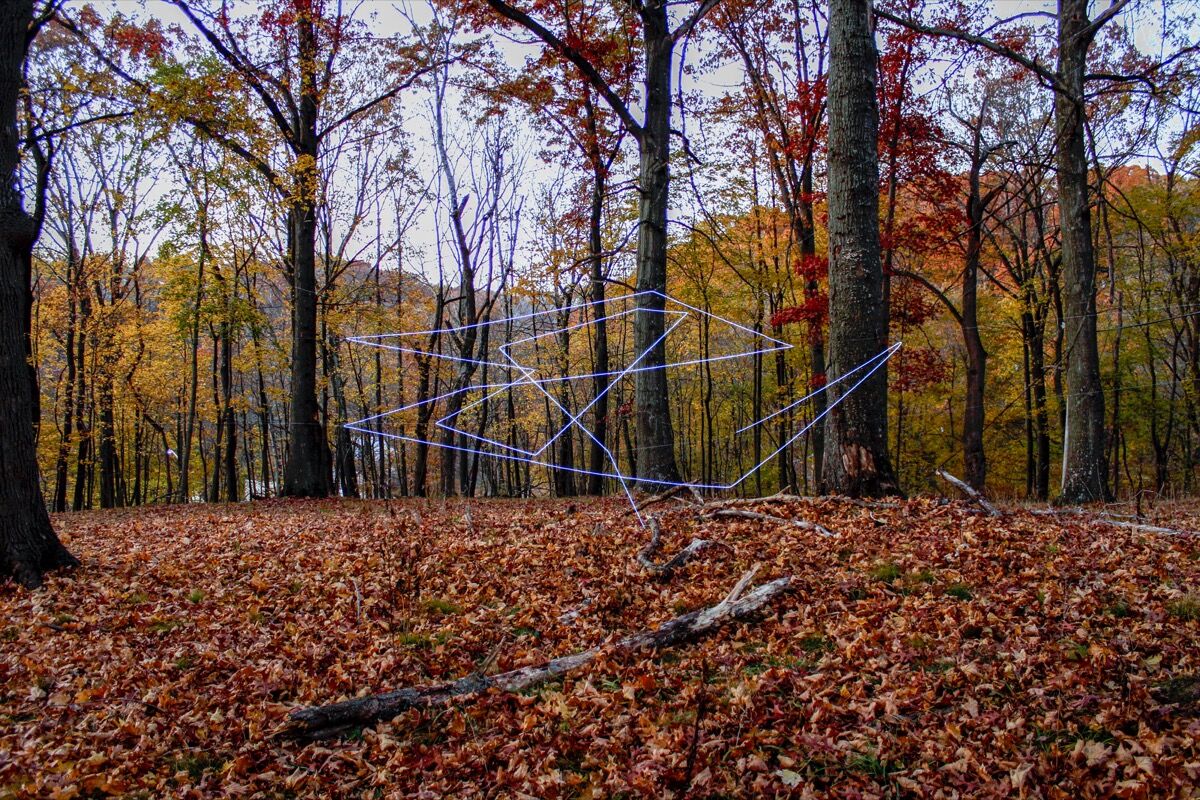 Advertisement
While in the first year he focused on emerging artists in their mid- to late twenties, more recently Conboy has focused on more established names, like Martha Rial, the Pulitzer Prize-winning photographer, and Lori Hepner and Dylan Vitone, whose works are being sent to the moon by Carnegie Mellon University. “We’re getting ready for our third year and nobody’s said ‘no’ to me yet,” Conboys says.
And just as artists and hospitals have been eager to participate, benefactors have generously provided financial support. While he began with a $10,000 grant from Crusade for Art, an award geared toward audience engagement, he has since earned significant funding from the Greater Pittsburgh Arts Council, the Opportunity Fund, and the Heinz Endowments—all of which covers the cost of the 2017 program.
He has also had conversations with like-minded peers to expand the program beyond Pittsburgh. Friends in Baltimore from the Maryland Institute College of Art are applying for funding to start the program there, and Conboy was recently flown out to Wisconsin to meet with the director of the Rahr-West Art Museum, who is also interested in building a franchise of Start with Art. Conboy hopes to expand within Pittsburgh as well. “Last week I just met with another hospital in town that would double the number of babies,” he says. “I think this third year is where we can start about thinking about expansion on a larger scale.”

Conboy has already collected countless affecting anecdotes from families who received an artwork—testaments to the positive effect the project is having on the community. One Bhutanese family was touched by their print from Terry Boyd, which, by chance, pictured a rice plateau in Bhutan that the family recognized. After receiving a print by Kara Skylling, another family was inspired to buy a new work of art for their child every year. Conboy connected them with Skylling, and they ended up commissioning her to do a work for the baby’s first birthday.
While families have yet to target these three hospitals based solely on Start with Art, it wouldn’t be surprising if the art-savvy and expecting crowd soon caught on. Rather humorously, some families have been so enthused about the print they’re scheduled to receive that they’re disappointed when their baby comes late, into the next month, leading them to receive a different print instead.
Beyond affirming that there’s an audience for this type of project, Start with Art has reinforced Pittsburgh’s strong sense of community. One of Conboy’s favorite prints, he tells me, was a photogram by April Friges, who created 275 silver gelatin prints by hand in her darkroom. “To make that kind of commitment for these babies, and the time involved, it really meant a lot to me,” he says. This investment in community has become a source of inspiration for Conboy, and it is likely what’s attracting other cities to get involved as well. “Pittsburgh is still in many way like a small city,” Conboy says. “Everyone knows each other or knows people who know each other. I think that’s the exciting thing: It feels much more like a community exercise than just an artistic project.”
Casey Lesser is Artsy’s Lead Editor, Contemporary Art and Creativity.
Related Stories