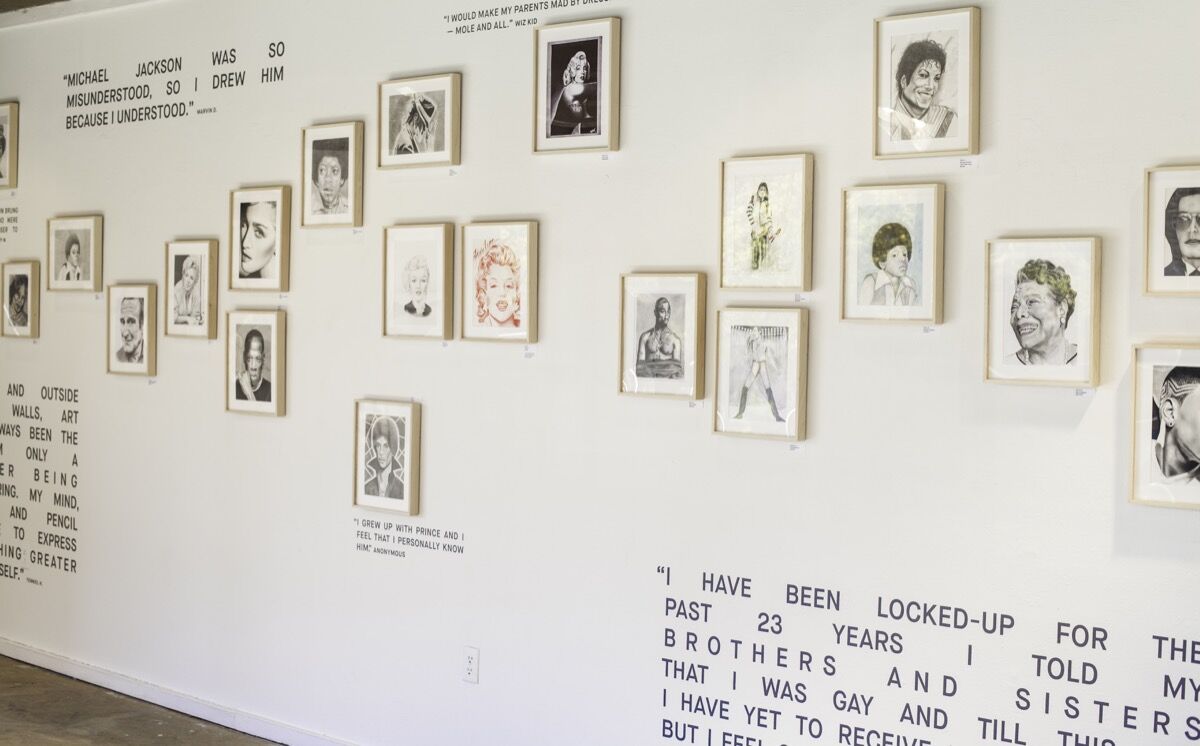 Late Tuesday night, Donald Trump became the 45th President-elect of the United States. His impending presidency casts a dark cloud over this nation, one colored by hate and intolerance. In the wake of the election’s results, the only thing I feel compelled to do is write about women and underrepresented communities in our country—those who have found themselves subject to insult from Trump, and who saw in Hillary Clinton a sign of promise in turbulent times.
Now that promise has faded. But there is hope, still, in the progressive leaders of this country, and in the driven and compassionate members of the public and organizations that work to give visibility to those who are most persecuted in our society. For those dismayed by Tuesday’s election, you might find hope in the Abrons Arts Center. Tucked away on New York’s Lower East Side, the center is the offspring of the Henry Street Settlement—a beloved social services non-profit founded by healthcare pioneer Lillian Wald in the late 19th century.
In its current exhibition, 450 framed drawings, rendered in pencil and Bic pen, hang on the gallery’s curved walls. They are almost entirely portraits, some naively drawn, of heroic historical figures, troubled celebrities, self-portraits, and individuals engaged in sexual acts. They were made by LGBTQ prisoners from across 180 prisons in 50 states, a collection amassed by Tatiana von Fürstenberg over the course of almost four years. Some of the works were made by inmates in solitary confinement.

In 2013, von Fürstenberg, a filmmaker, singer, and daughter of fashion designer Diane von Fürstenberg, put an ad in the monthly newsletter of LGBTQ rights organization Black and Pink, which circulates around America’s prison population. In it, she invited artists to submit works of art to her by mail. For those accepted, she would send $50 in return. “I was looking for a pen pal to do an act of love,” she told me, with disarming sincerity, at the exhibition’s opening last week. “I stumbled upon Black and Pink, and the newsletters are actually sprinkled with artwork. So then I had this idea that, instead of just having one pen pal, I could do something that would encourage more than one person.”
Several months later, in a prison in Marlin, Texas, an inmate named Jennifer Mayo caught wind of the ad. “I sat on the ad for a while because you know, she was offering $50—that’s a lot of money in here—but I also needed money for coffee next week,” she told me at the opening, which she’d been flown out to by Black and Pink. Mayo already had a covert business in which she would create art for sale to other prisoners in order to buy supplies from the commissary. Typically, these works were cards she made, featuring drawings of cartoon figures, for incarcerated mothers to send to their children.
Trafficking and trading in prison is a punishable offense, she told me, but one that provided her a lifeline. With a 45-hour-per-week unpaid job in the maintenance department of the prison, Mayo only had time for her art business and couldn’t find extra hours to create art for von Fürstenberg’s collection. Then, she caught a break. Mayo was transferred to another prison for the last four months of her sentence, where she had more free time. “I sent nine pieces and she accepted seven,” she said. “So when the envelope arrived with my money, I was expecting $50, but when I opened it, there was $350. That is a fortune in prison. It made my last few months so much easier.”
The work Mayo is showing in “On the Inside,” as the exhibition is titled, is a drawing of a buff male figure in Raybans with text written alongside it: “Would you look at me differently if I told you I was gay?” It hangs nearby a wall of what von Fürstenberg calls “warriors.” These are portraits that prisoners sent her of their heroes, including the familiar faces of President Lincoln, Nelson Mandela, and indeed one of Hillary Clinton. 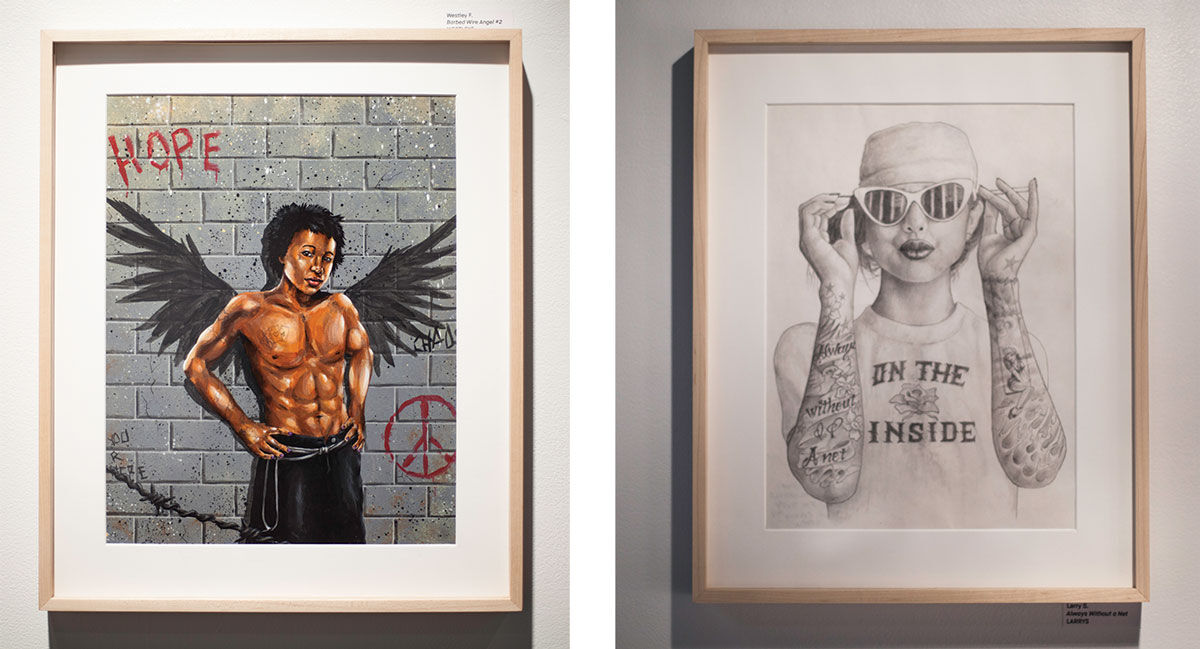 Advertisement
For her part, Mayo was interested in exploring gender identity in her art. As a butch lesbian, she said, you’re the most wanted in female prisons. “You’re the top of the food chain. Then you come out into society and you’re an oddball and maybe looked down upon. So it’s probably easier to fall back into that trap.” For gay men, though, she suspects it’s quite different. “I thought, how must it be for them?” she said. “I believe they’re more vulnerable.”
Elsewhere in the exhibition, von Fürstenberg has organized groups of images according to the themes she saw emerge in the hundreds of artworks she received. “Eighteen months into the collection, I probably had 200 or 300 pieces,” she said. “I laid them all on the floor and I grouped them. First of all, I was amazed that they’re all portraits. They all wanted to be seen. Love, the need for physical contact, touch,” she continued, listing the subjects that surfaced in the work. “There were a lot of hybrid fairies and mermaids and gender-pluralization pieces. Some are relating to Christ almost as a celebrity figure. He was mutilated in a way that many queer bodies have been mutilated. And many of them have been marginalized and condemned in the same way.”
In the section dedicated to celebrities—where multiple images of Michael Jackson and Marilyn Monroe dot the walls—an entire area is covered with portraits of Rihanna. “The celebrity section is fascinating,” von Fürstenberg said. “Sixty percent of the collection is celebrities, and Rihanna was number one. I think because she’s relatable—she’s a badass but she’s also vulnerable. No Beyoncés. I ended my collection pre-‘Lemonade,’ but still, no Beyoncé, no Kardashian, none of that polish. They’ve chosen people who suffered, who are relatable, a little broken.”
The majority of work she received came on prison copy paper in similar dimensions. To break it up, she pulled protagonists from the self-portraits, blew them up, and turned them into murals that serve as backdrops to the drawings. Then, she pulled quotes from the letters that came with the art and tried to build a narrative. “Do not subjugate me to be all you want me to be while you’re free to live as you please,” one quote reads. Another goes: “The ground may shake and rage may cry. I might be afraid but I will not lie.”
The works, Mayo says, are not what you’d see artists making in prison. Rather, those who responded to von Fürstenberg’s ad have presented the views of themselves and the hopes, dreams, and desires that they wanted an outside audience to see. “None of it is what I consider prison art,” said Mayo. “In there you’re always drawing hearts, jail bars, and cartoon characters for people’s children. To see that people are able to represent themselves for what their real issues are, what they are actually feeling, is really awesome.”

Together, the works create a deeply human picture of this population, one that’s so often dehumanized in the public eye. “This population, I learned quickly, is the most forgotten,” said von Fürstenberg. “They’re marginalized well before they go to prison and they feel shameful. Now, in addition, they have to rise from the ashes after being labeled a criminal. And they’ve often been shunned by their families.” LGBTQ inmates are also more likely to be subject to violence in prison.
What’s perhaps most striking about this project is the extraordinary care and labor von Fürstenberg and her collaborators—LGBTQ and prisoners’ rights advocates—have taken to bring it to fruition. A volunteer engineer for Black and Pink has been working to log and track each artwork accepted, and they’ve devised a system whereby each artist name, abbreviated for privacy, has a code associated with it, which visitors can use to send messages to the artist inmates.
Von Fürstenberg spoke passionately about the way these artists have chosen to express themselves. “The way these artists identify,” she said, “is first and foremost, ‘I’m an artist,’ then maybe ‘I’m a queer person,’ and ‘I don’t even think about the conditions that I live in and it has nothing to do with my identity.’” She hopes the show will travel around the country, giving this invisible population a greater presence in America. “It was a monumental effort and it’s really important to communicate,” she said. “If we could get a college tour or something. Everything’s done and easy to reproduce. We’ve done the heavy lifting.”
The LGBTQ population, whether in prison or in the free world, is one that will almost certainly suffer more under a future president who has talked about rolling back marriage equality and demonstrated a total lack of compassion for minority groups. Art can’t save us, but cumulative acts of generosity and activism, such as von Fürstenberg’s, can help make this a kinder world.
Tess Thackara
Related Stories