Ben Eastham
Jun 10, 2016 4:34pm
The 11th edition of Manifesta, the itinerant European biennial of contemporary art, takes as its curatorial theme the question of “What People Do for Money.” It opens in Zurich less than a week after the Swiss population went to the polls for a referendum to make the provision of a basic income—which it was suggested would be equivalent to around $2,560 per adult, per month—a constitutional right for every citizen. The petition failed to pass, but it succeeded in imagining a future world in which basic needs are provided for by the state, and in which no one is obliged to work. In this brave new world, work would become an activity that was chosen by, rather than forced upon, the individual. Our careers would function as expressions of our personalities, rather than as chores to be endured for the sake of evenings and weekends in which we can indulge ourselves. 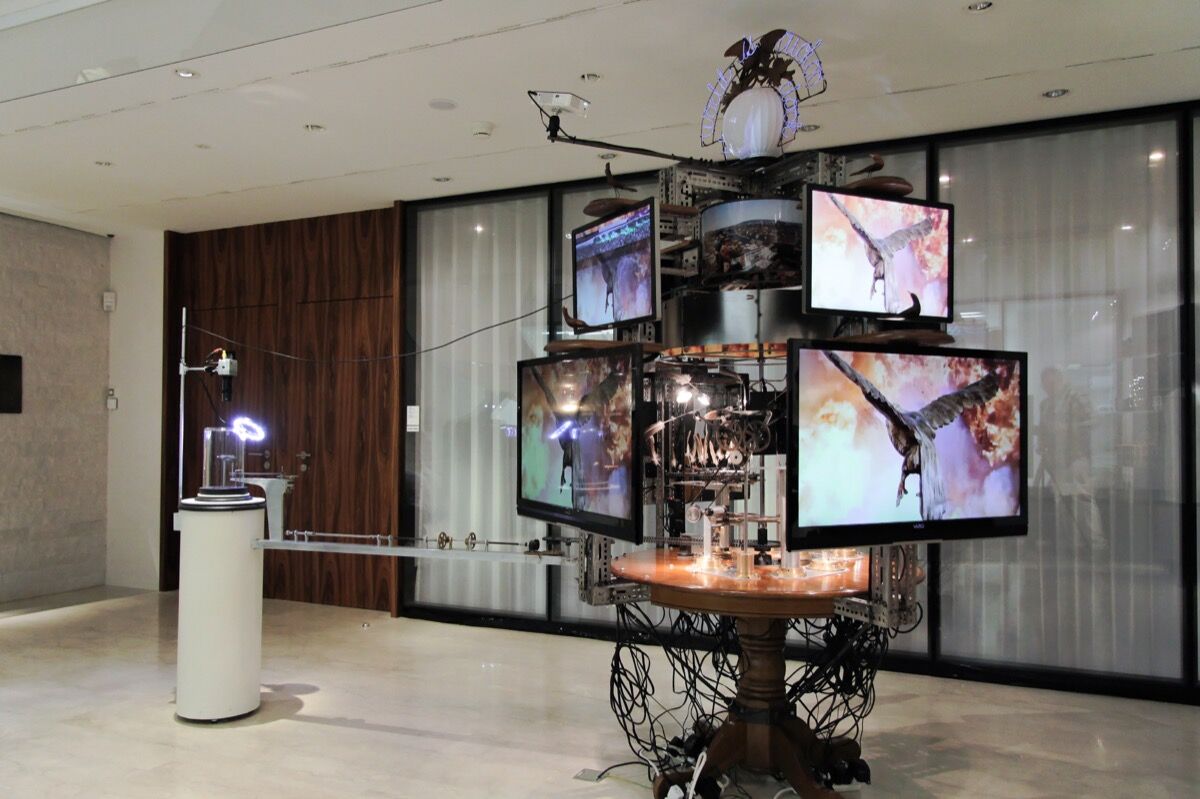 This hopeful interpretation of work—as a dignified activity over which we exercise a degree of control, which shapes us as people, and which inspires professional pride—is shared by
Christian Jankowski
, who leads Manifesta's curatorial team this year. With the help of co-curator Francesca Gavin, he has paired artists with professionals from a variety of different fields, asking that a new work is developed as a “joint venture” between the two. The resulting collaborations are exhibited in two parts: at one of the two main exhibition venues (as part of the “historical exhibition,” which combines the commissioned pieces with a curated selection of work that addresses the relationship of art to labor), and at one of the “host” venues across the city that typically double as the professionals’ workplaces.
So it is that, to view the American artist
Jon Kessler
’s contribution to the biennial, you have to enter a luxury watch shop and politely ask an assistant some variant on the question “where is the art?” You will be pointed in the direction of the basement, in which is installed a vaguely monstrous sculptural hybrid of flickering digital screens driven (it seems) by a carefully calibrated mechanism of clicking springs, gears, and wheels. The work was developed in collaboration with the master watchmaker Officine Panerai. Through a glass screen beside the work an employee in a white coat can be seen dutifully fiddling with the innards of an expensive-looking timepiece. You wonder what he thinks about all the fuss in his shop. A second, similarly conceived but less baroque iteration of the collaboration is presented as part of the main group exhibition at the Löwenbräukunst complex, home to the Kunsthalle Zurich. 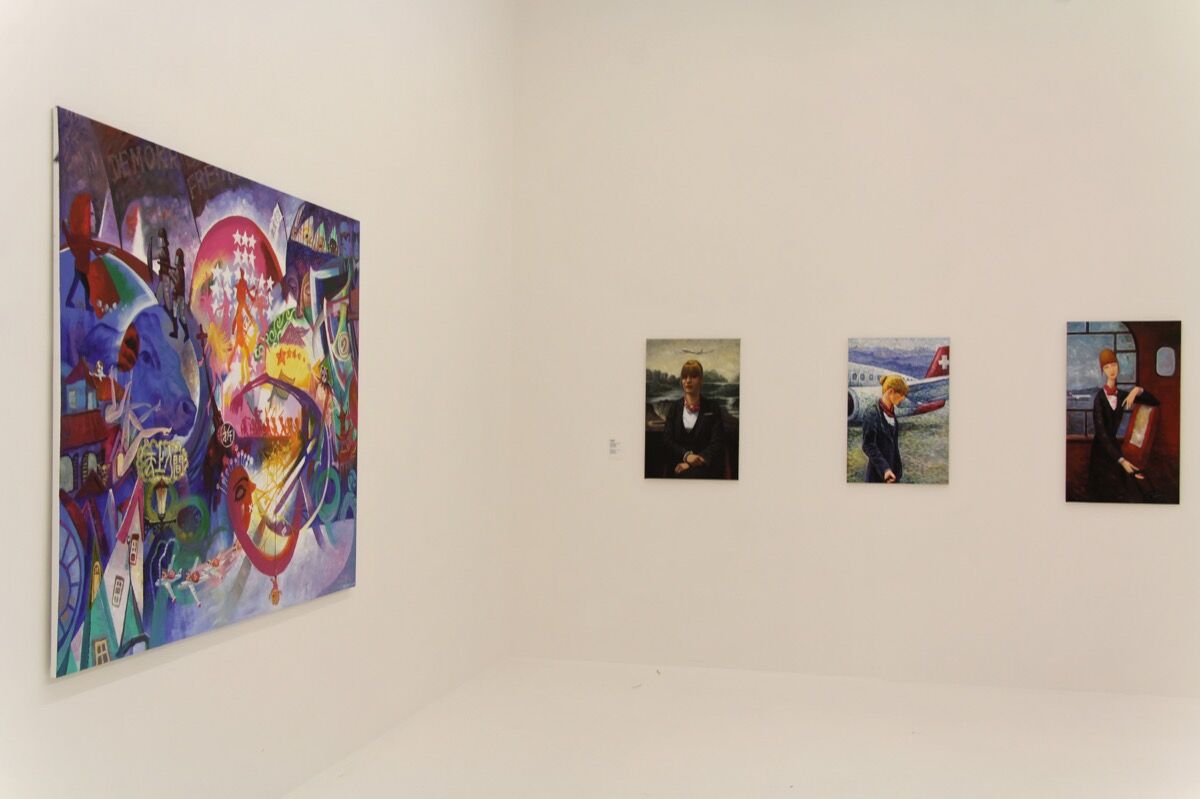 Advertisement
Elsewhere, in the bizarrely themed Wings Airline Bar & Lounge on Zurich’s riverside, a kitschy,
Chagall
-esque diptych by the Chinese painter Yin Xunzhi hangs over purple upholstery. This is the fruit of a collaboration with a Swiss air hostess, realized as a series of portraits that pastiche
da Vinci
,
Modigliani
,
Klimt
, and
Warhol
, among others. Yin hails from Dafen village, a community of artists working in China to produce cheap reproductions of famous oil paintings by the greats of Western art. (A knockoff version of
Picasso
’s Dora Maar au Chat, 1941, will set you back $85.) He now aspires to a more conventional artistic practice. For all the charm of his collaboration, though, his career to this point is the more eloquent expression of the fragile systems of faith—in the notion of individual genius, in the fetish value of the original—that underpin the art market.
It’s possible to read the collaboration between
Mike Bouchet
and a local “waste process engineer” as a more caustic commentary on the belief systems of the art world. A total of 80,000 kilos of human feces, produced by Zurich’s population on March 24, 2016, has been dried and packed into heavy square blocks, exhibited at the Löwenbräukunst. What might have been a facile stunt is made extraordinary by the formal and sensory—visual and olfactory—power of the installation, a vast grid of square blocks that recalls the minimalist grandeur of
Richard Serra
or
Carl Andre
, but shorn of the machismo. Taking inspiration from an earlier turn in the digestive cycle, American artist John Arnold has collaborated with a Michelin-starred chef to create Imbissy (2016), which takes the humble fast food booth (or “Imbiss” in German) and transforms it into a diplomatic site, bringing politicians, artists, and members of the public together for banquets that combine haute cuisine with takeaway traditions. With these two works, Jankowski’s stated ambition for his biennial that “the audience becomes the artist, not only consuming but producing art” suddenly seems uncomfortably literal. 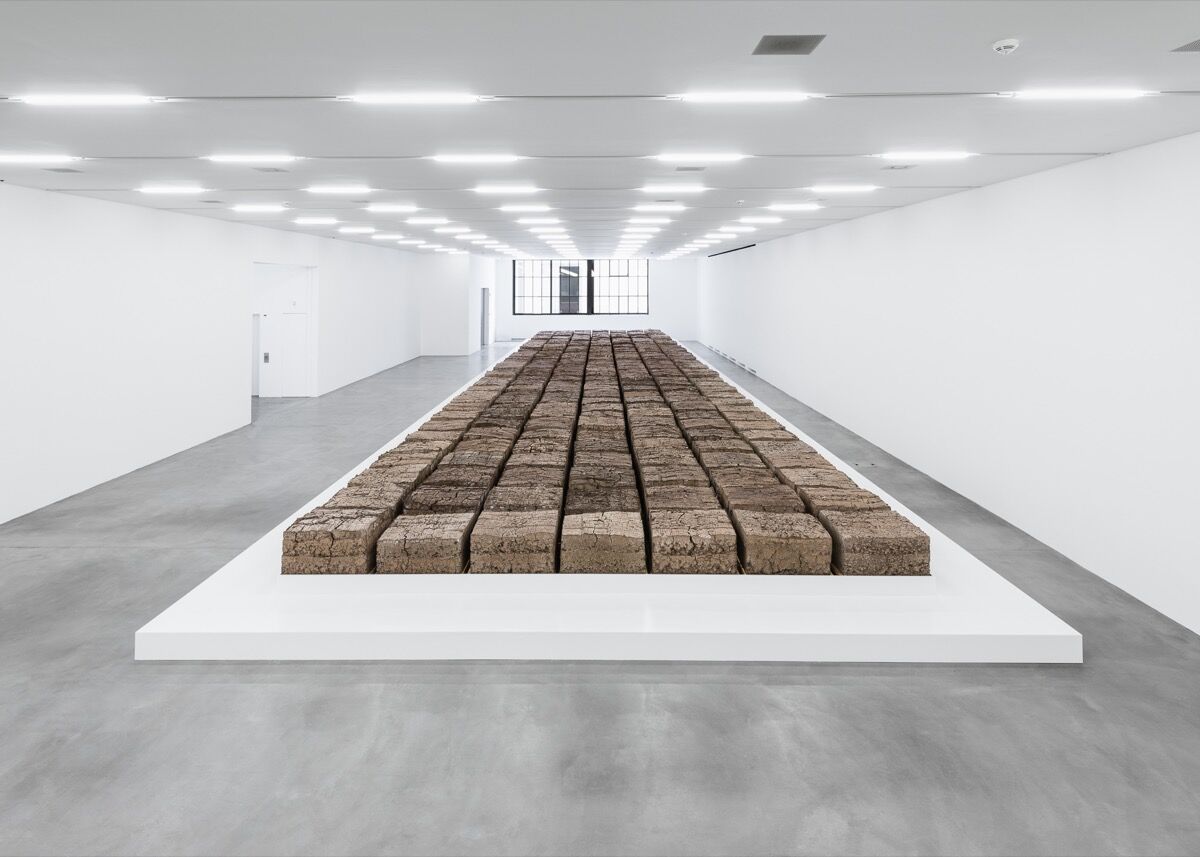 These, and the many other collaborations on view, are illuminated by an affecting series of documentary films about the making of the work—presented by local high school teenagers and Media degree graduates. These “art detectives” follow the artists around as they meet and begin to develop a relationship with their working partners, asking the refreshing questions of both parties that only a teenager would dare to ask (but which everyone wants to hear). The pleasure of these short films is that they do not disguise the awkwardness or indecision of the artists when placed in this unusual position. Quite a number of these projects fail as works of art—as is inevitable of such an ambitious undertaking—but succeed in their broader determination to allow non-artists to consider and discuss their labor in the reverential terms usually reserved for art. When the relationship clicks—as between Bouchet and his partner, who is visibly enthused and engaged—these “joint ventures” emerge as worthwhile, even radical, initiatives.
The short films are projected onto a large screen at the “Pavillon of Reflections,” a timber construction resembling an illuminated floating castle on Lake Zurich. Designed and built by Studio Tom Emerson for the biennial, the pavilion serves as a place to reflect upon the work exhibited. In practice, it will serve as a bar, swimming pool, and spectacular addition to the city’s waterside. Finally, the famous Cabaret Voltaire—the birthplace of
Dada
, which celebrates its centenary in 2016—is transformed into an artist’s guild for the performance of more “joint ventures” between artists and non-artists. Anyone can sign up, and Jankowski estimates that there will be over 1,000 performances over the course of the biennial. 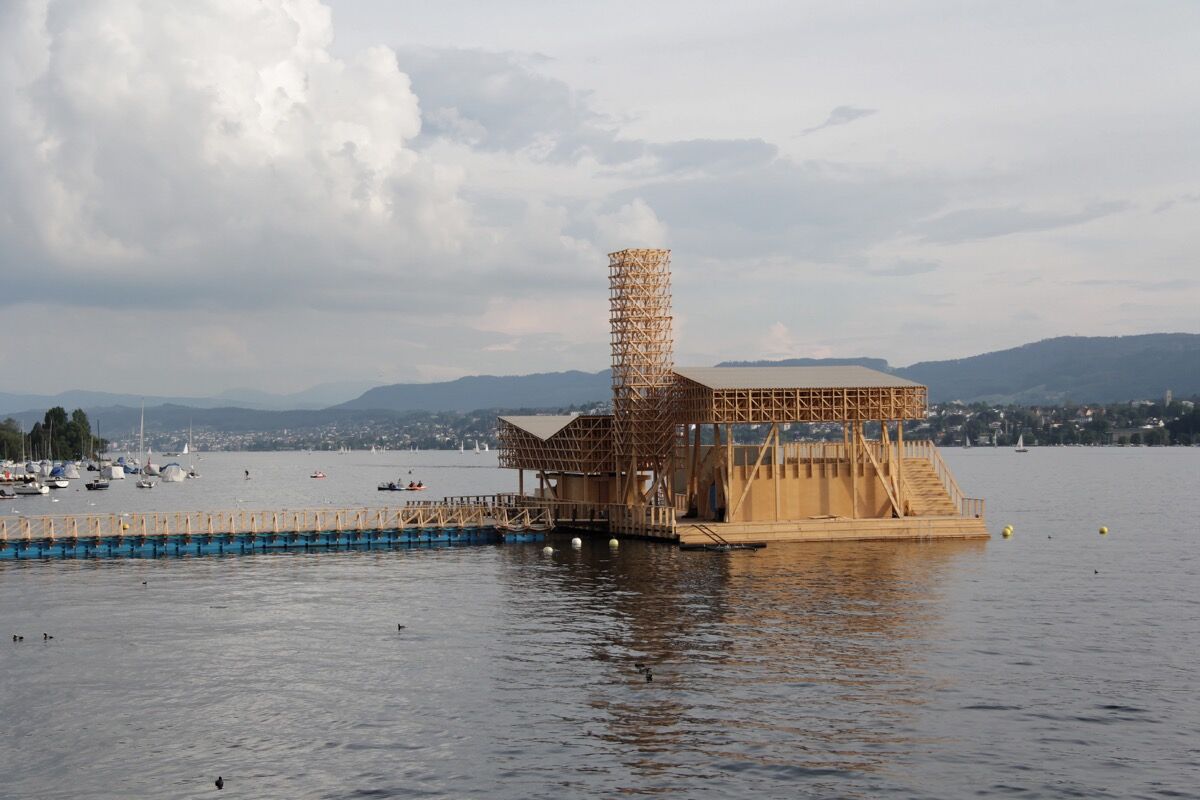 Manifesta has a reputation as the most forward-thinking of the European biennials, a place for experiment. For all the novelty of its “joint ventures,” the most radical aspect of Jankowski’s focus on collaboration and participation is its sincerity. The dignity he affords to work—in this age of economic precariousness, zero-hour contracts, and job instability—feels curiously nostalgic.
Ben Eastham
Related Stories