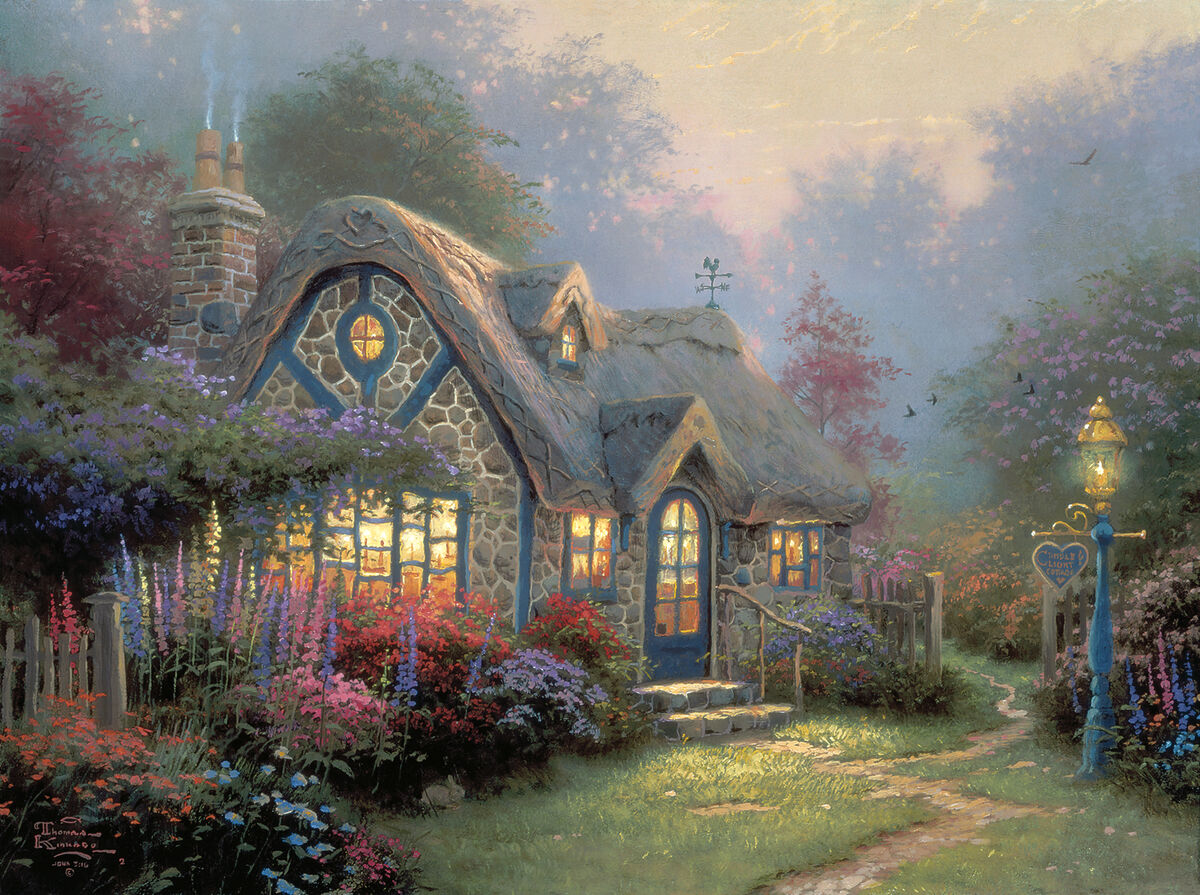 Imagine a realm far, far away from the constant barrage of bad news, where glowing cottages nestle in abundant thickets of flowers or on rocky outcrops by the sea. This is a land immune to tsunamis and earthquakes; isolated from the political rhetoric that splits nations and families in two.
If that sounds idyllic to you, artist
Thomas Kinkade
certainly thought so when he began painting his now-famed, sugary-sweet landscapes in the 1980s. “[My paintings] beckon you into this world that provides an alternative to your nightly news broadcast,” he told the New York Times in 2001. “People are reminded that it’s not all ugliness in the world.”
Indeed, Kinkade’s light-drenched, paradisiacal scenes depict a respite from harsh realities—and have charmed millions of Americans. Kinkade’s company has claimed that one in every 20 homes in the U.S. contains a Kinkade painting, print, or tchotchke stamped with his work and name. If the numbers are true, they make him—to the dismay of countless fine art critics who’ve derided his work as twee, schlocky, or downright kitsch—the most-collected artist in America. 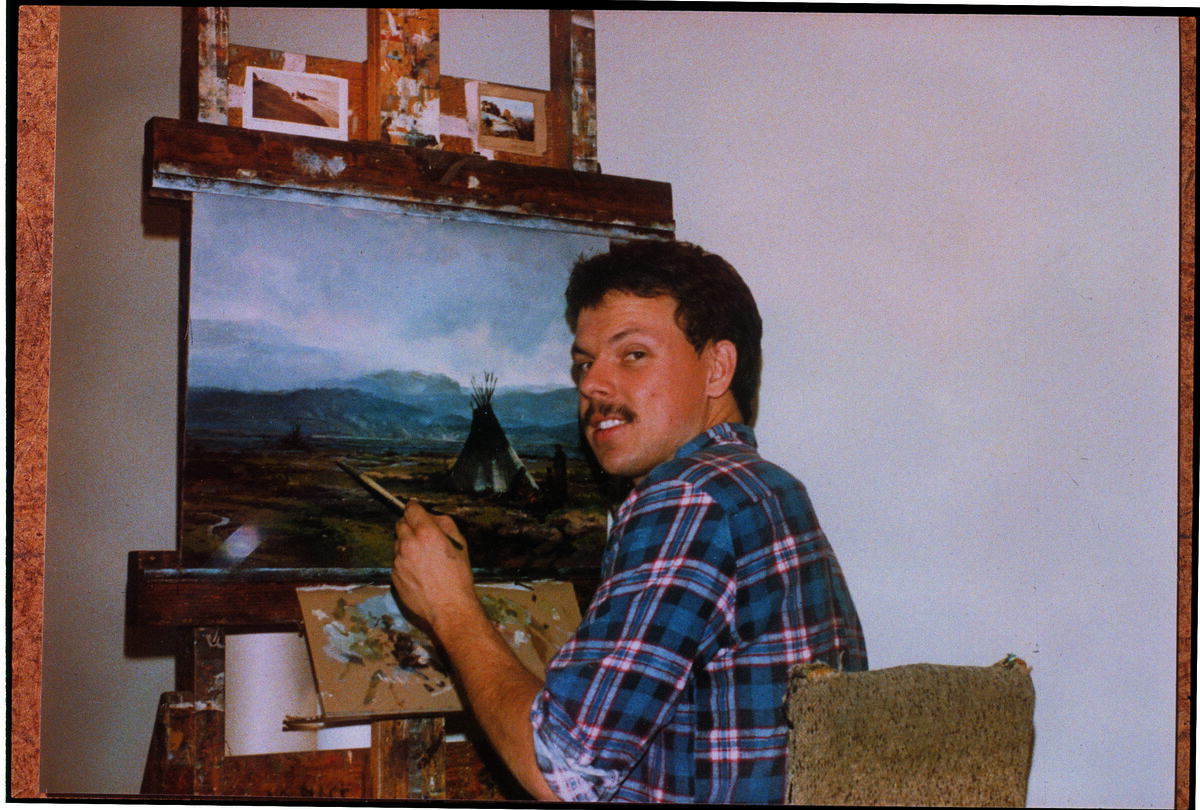 “There’s been million-seller books and million-seller CDs. But there hasn’t been, until now, million-seller art,” Kinkade told reporter Morley Safer, on 60 Minutes, in 2001. And Kinkade did make millions. His business, Thomas Kinkade Company (now Thomas Kinkade Studios), was once publicly owned, and has built a fortune selling prints via television shows like QVC and licensing images to corporations like Disney, Hallmark, and La-Z-Boy furniture. In the interview, he emphasized: “We have found a way to bring to millions of people an art that they can understand.”
But despite Kinkade’s insistence on accessibility, his practice (and the room-splitting response to it) has also embodied deeply divisive aspects of our contemporary culture—namely, that thorny place where populism and elitism collide. “I think it’s impossible to not see him as somebody who did a lot to inflame culture wars, and to make a lot of money articulating to people that they were on the outside, that people were looking down at them, that the art world was laughing at them,” said Alexis Boylan, editor of Thomas Kinkade: The Artist in the Mall, a 2011 book culling scholarly essays on Kinkade’s work and its influence.
But to understand Kinkade’s approach, we must first backtrack to his beginnings. Known to his friends and fans as Thom, Kinkade grew up in the 1960s in the small town of Placerville in northern California. After his father left the family, Kinkade and his siblings were raised, in relative poverty, by their single mother. “His mother did her best to raise three kids, but he still always longed for the home that had the lights on, all the fireplaces lit—for a warm, homey feel,” Denise Sanders, who worked alongside Kinkade for 15 years, until his death in 2012, told Artsy. (She still works at Thomas Kinkade Studios.) 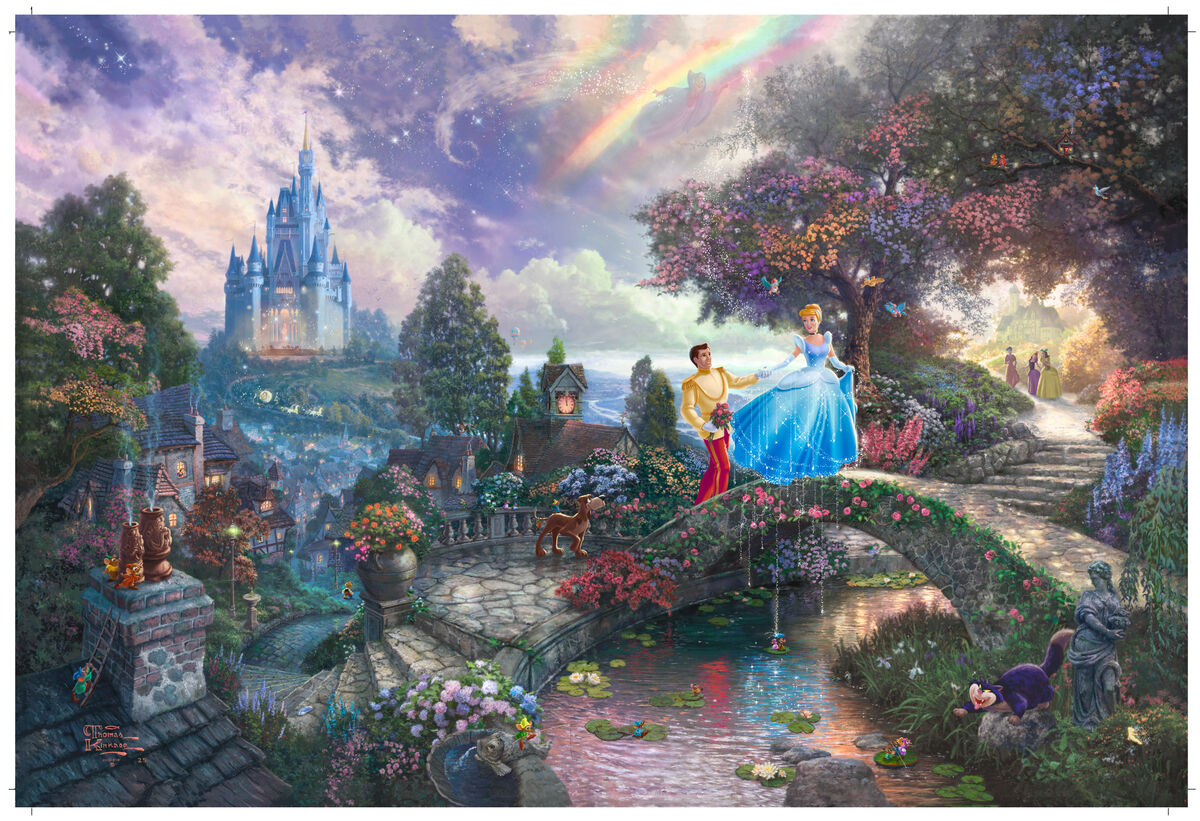 Advertisement
While Kinkade was in high school, a well-known painter from northern California, Glenn Wessels, serendipitously moved in next door after retiring from his teaching position at University of California at Berkeley. Kinkade, who had taken up sketching comics and caricatures as a child, asked if he could apprentice with the older artist; his painting education began in Wessels’s barn.
At his mentor’s urging, Kinkade went on to study art at Berkeley, but according to Sanders, he was disillusioned by what he saw as the school’s insistence that art need not speak to a wide audience. “And that’s not where Thom’s heart was,” Sanders explained. “He wanted to appeal to everybody.”
Soon after transfering to the Art Center College of Design in Pasadena, Kinkade dropped out to paint backgrounds for the 1983 fantasy animated film Fire and Ice. He split his time between living in Hollywood and hopping freight trains with his friend and fellow artist, James Gurney (author and illustrator of the 1998 cult children’s book Dinotopia). They made ends meet by sketching portraits of strangers, and eventually, the two landed in New York City with an idea for a book in hand; by 1982, they’d published The Artist’s Guide to Sketching. 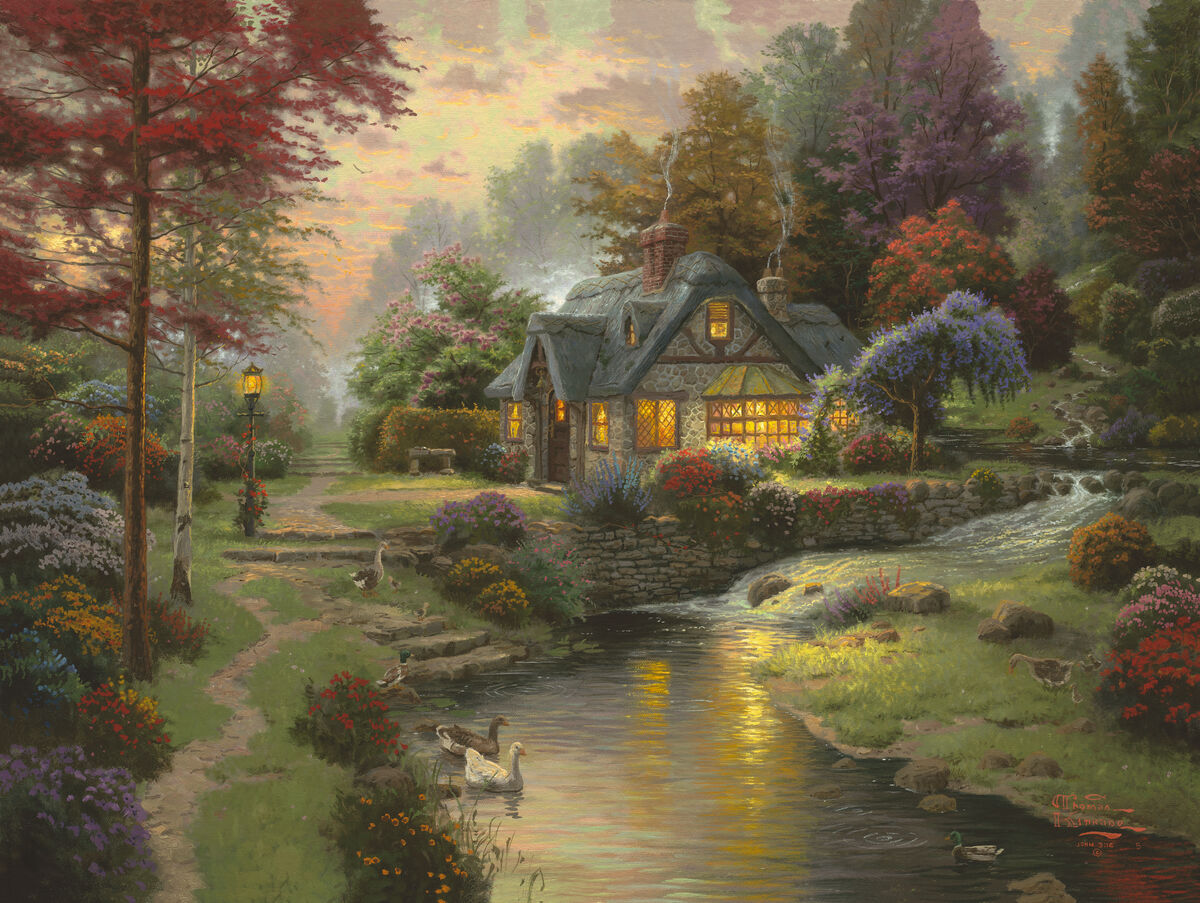 Around this time, Kinkade relocated back to California; became a born-again Christian; settled down with his wife, Nanette; and began painting the dreamy, saccharine landscapes that would bring him fame and infamy. In step, the young couple pooled their savings and started making limited-edition prints of Kinkade’s paintings, which they first sold in front of the local grocery store for $55 a pop; from there, his success snowballed. By the late 1990s, Kinkade had started a successful company and began franchising galleries in malls and shopping centers across the country, which sold his limited-edition prints by the thousands.
In almost every way, Kinkade’s shops were the complete antithesis to the fine art world’s sterile “white cube” galleries, which were thriving in megalopolises like Manhattan and London. Instead of white walls dotted with costly abstract art, Kinkade’s shops were plush, filled with big chairs and roaring fireplaces. “Our galleries are soft. You don’t echo when you walk in. It’s comfortable,” Kinkade explained to Safer. What’s more, prints were priced reasonably between several hundred and several thousand dollars.
In the process, Kinkade was creating spaces where communities that didn’t have access to the fine art world could buy work without feeling alienated. Kinkade collectors came in droves. While researching her book in the mid-2000s, Boylan met one of Kinkade’s many fans at an in-person signing by the artist. “She was so excited, so earnest, and even got a little teary-eyed in talking with me about what [his work] meant to her, and what [it] meant to her family,” Boylan recalled. “Regardless of how he made [his prints] or what people think about [them], there’s a large population of people who are also profoundly and deeply affected by his work,” she continued. 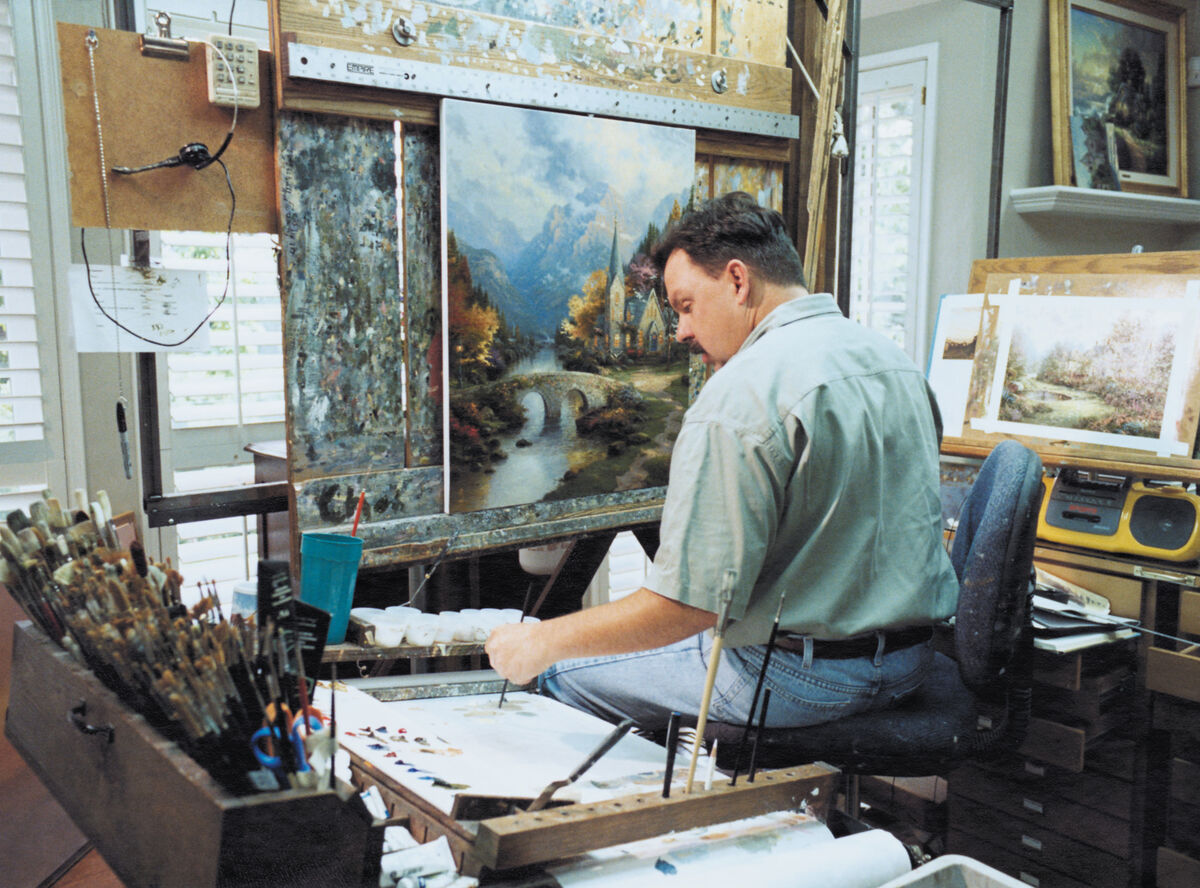 But Boylan is also quick to point out that Kinkade was strategic in growing his base—especially when it came to capitalizing on the divide between America’s cultural elite and the working class. Indeed, the artist’s target audiences have largely lived outside of major cities, and many have felt alienated by the art world’s museums and fine art galleries.
A host of critical responses to Kinkade’s work only fanned the flames of this cultural rift. In 1999, the New York Times reported that Kinkade had “no champions in the high-art world.” Scholar and curator Robert Rosenblum, who’d long advocated for illustrator
Norman Rockwell
’s work amongst fine art circles, didn’t believe Kinkade deserved the same honor. “He doesn’t look like an artist who’s worth considering, except in terms of supply and demand,” he was quoted as saying. Critic Jerry Saltz echoed the sentiment when he told the Wall Street Journal that “art is not democratic. It isn’t about the biggest market share. If that were true then Thomas Kinkade would be the greatest artist who ever lived.” And in her watershed 2001 New Yorker profile of the artist, Susan Orlean wrote that his paintings were “more of a wishful and inaccurate rendering of what the world looks like, as if painted by someone who hadn’t been outside in a long time.”
Kinkade characterized these responses as elitist, and his disdain for the art world calcified as they poured in. In Orlean’s article, he rebutted: “The number one quote critics give me is: ‘Thom, your work is irrelevant.’ Now, that’s a fascinating, fascinating comment. Yes, irrelevant to the little subculture, this microculture, of modern art,” he said. “But here’s the point: My art is relevant because it’s relevant to 10 million people. That makes me the most relevant artist in this culture, not the least. Because I’m relevant to real people.” 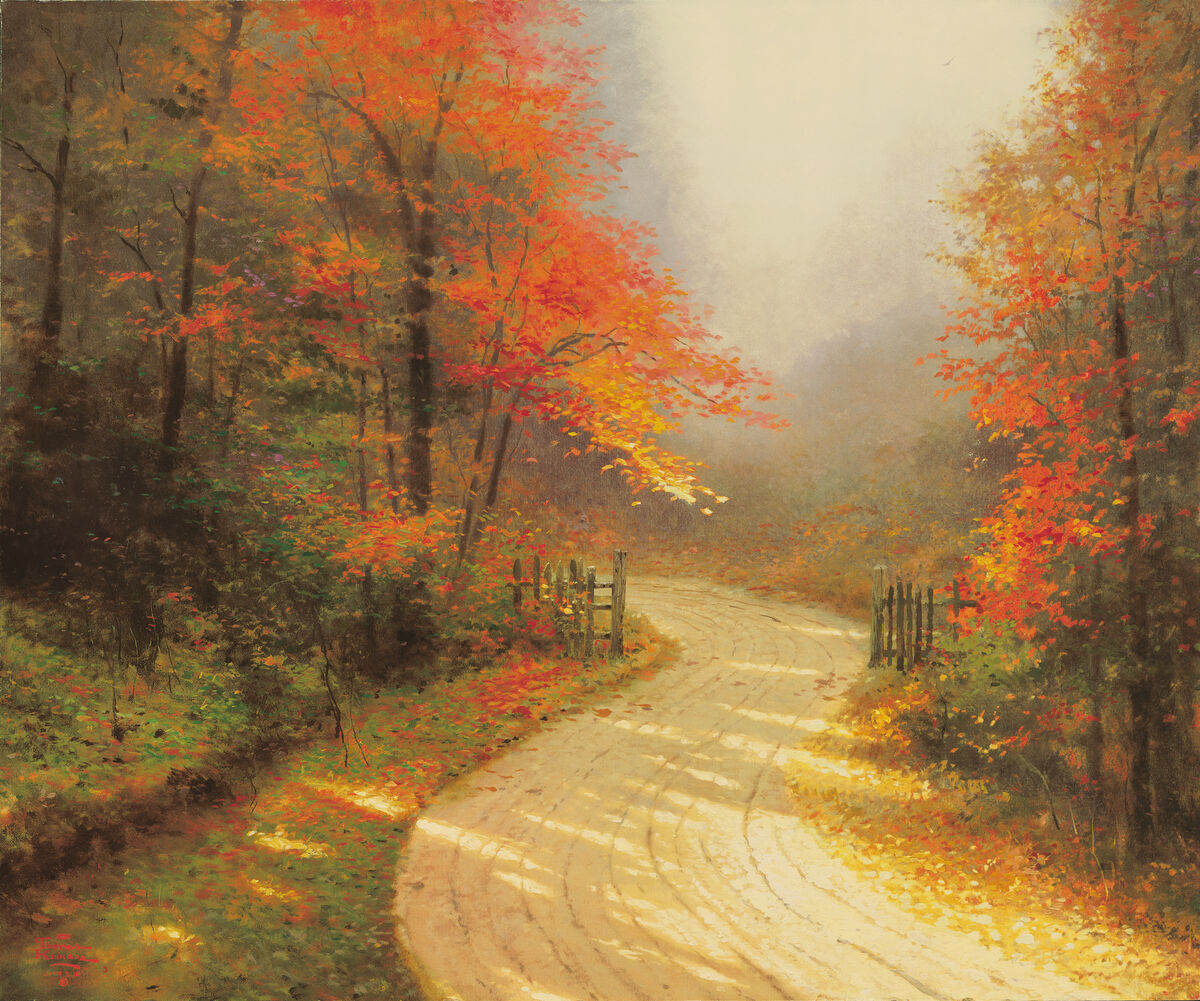 Kinkade emphasized this divide in his many TV spots and public appearances—and to his company’s advantage. “He was very much an agent of antagonism; encouraging people that their own cultural institutions were against them,” Boylan noted. But the artist’s messages were mixed. “I would want to argue that I’m not an antagonist to modernists. I just believe in picture-making for people,” he told Orlean. On the other hand, he also explained that “we have a grassroots movement emerging in my art and in the country, and there’s 10 million people out there that if I give the word will go out and picket any museum I want them to.” He continued: “I won’t give the word, but they’re dying to have an art of dignity within our culture, an art of relevance to them.”
It’s this kind of “insider-outsider” rhetoric that Boylan sees as especially relevant today, as the partisan rift widens in American politics. “If anything, Kinkade was a bellwether of the historical moment we are in: where a significant population [feels] both entitled and aggrieved about the nation and our culture,” Boylan explained.
Though Kinkade died in 2012 at the age of 54, under a cloud of controversy related to alcoholism, infidelity, and legal troubles, his work still remains ubiquitous in America. The year of his death, his company broke $4 billion in revenue. Today, Thomas Kinkade Studios continues to forge licensing deals with major corporations, like American Greetings and Disney.
While, on one hand, Kinkade’s work and its enduring popularity remind us that art is deeply important to a diverse population of people, it also continues to represent a deep cultural divide—bolstered by antagonism from both sides. “The unfortunate part of [Kinkade’s work and legacy] is how very good people have become at inflaming the dialogues around difference and how vicious and truly damaging that kind of language is,” said Boylan. “But I would also say that if Kinkade engages in that [language], many of his critics do, as well.”
Alexxa Gotthardt
Related Stories