How Tiffany & Co. Monopolized a Shade of Blue 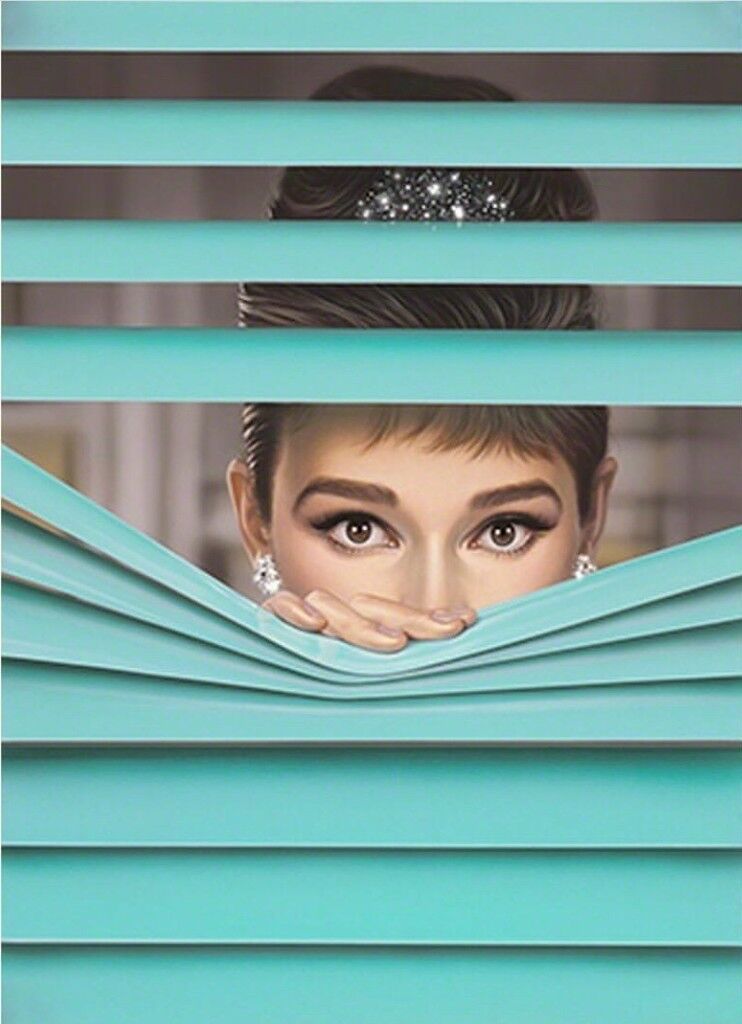 In the early 1990s, color went to court. The Chicago-based company Qualitex, which produces green-gold press pads for dry-cleaning plants, sued St. Louis’s Jacobson Products for making the same items in the same hue. The case made it to the Supreme Court, and in his opinion that favored Qualitex, who ultimately won the case, Justice Stephen Breyer wrote: “Color alone, at least sometimes, can meet the basic legal requirements for use as a trademark. It can act as a symbol that distinguishes a firm’s goods and identifies their source, without serving any other significant function.”
In the years since, brands ranging from T-Mobile (magenta) to UPS (deep brown) have trademarked their own colors, signifying their potency in building loyal customers and communicating a company’s ethos. Cadbury has spent more than a decade in legal battles to expand its claim of the color purple; last week, Cadbury lost rights to its trademarked hue (Pantone 2685C) after Nestlé opposed its application to trademark it for all of its goods (and not just a single chocolate bar). Yet of all these chromatically oriented organizations, it’s the jeweler and retailer Tiffany & Co. that has made a single blue hue synonymous with luxury. 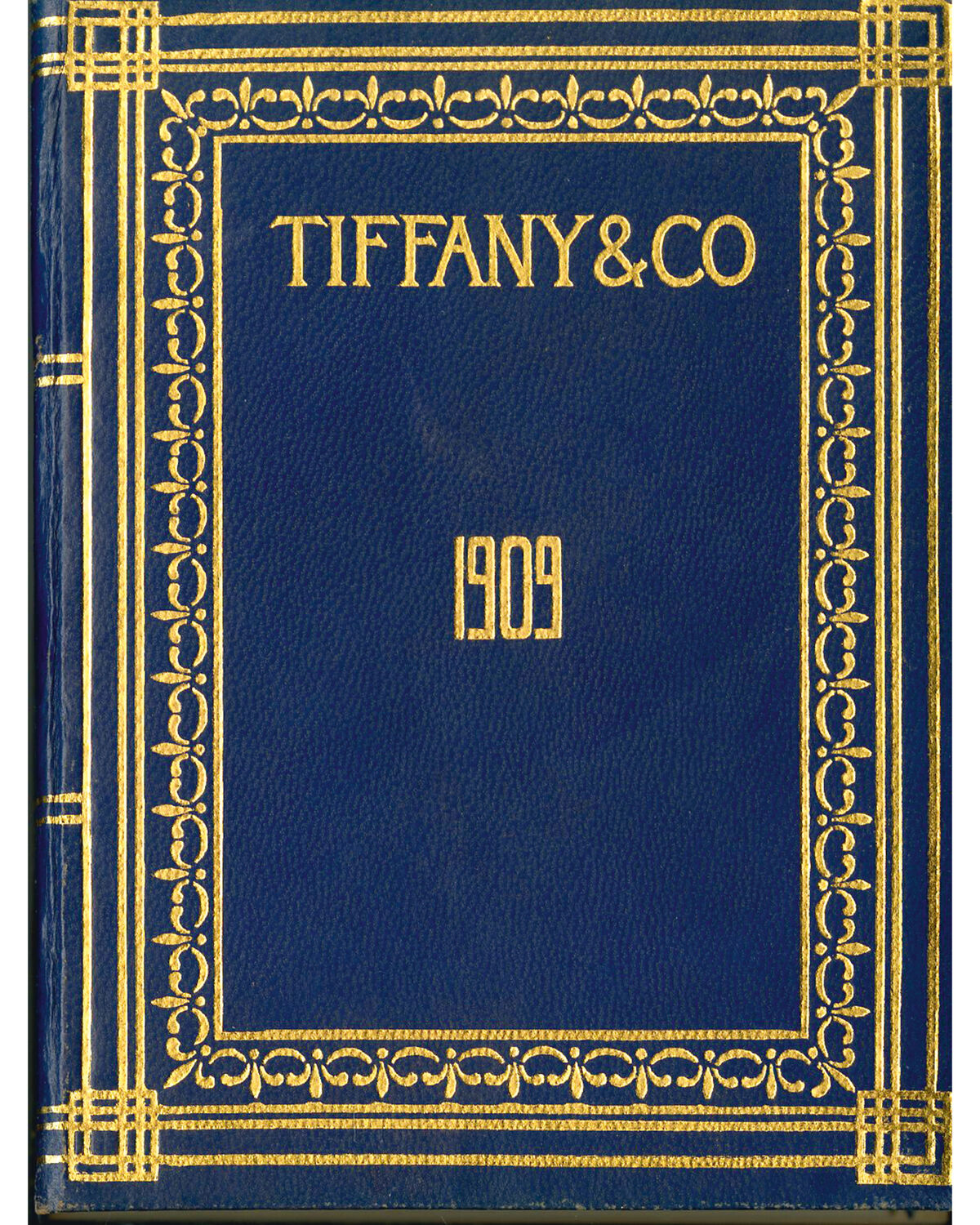 Blue Book from 1909. Courtesy of the Tiffany & Co. Archives. 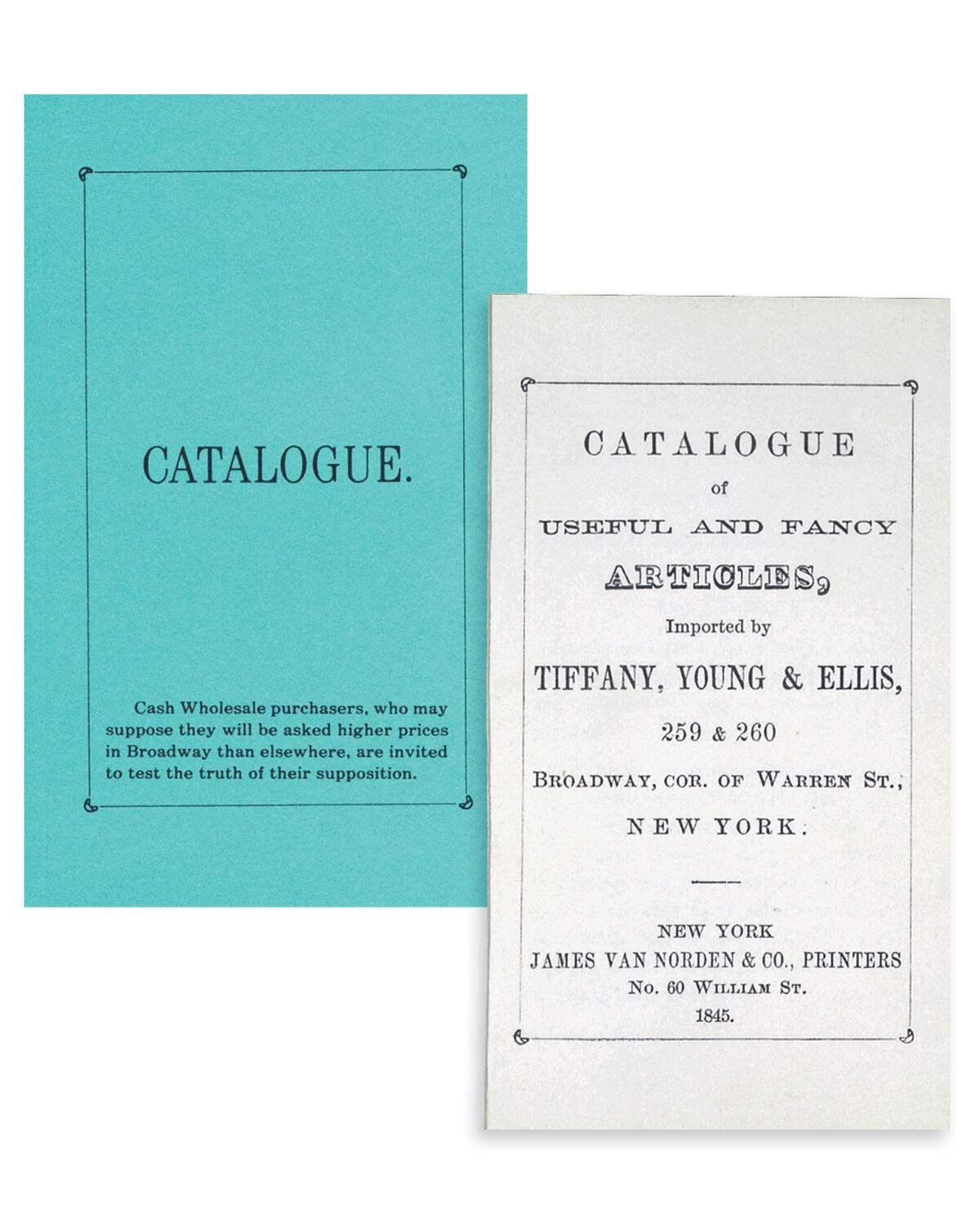 In 1837, Charles Lewis Tiffany and John B. Young opened the shop Tiffany & Young for stationery and other high-end goods in Lower Manhattan, just across from City Hall Park. Before the brand even became a major purveyor of silver—or solidified its name—Tiffany & Young began publishing the now-iconic Blue Book. First issued in 1845, the “Catalogue of Useful and Fancy Articles” featured a blue cover that skewed more green than the robin’s egg hue we now associate with the brand. Over the subsequent century, Blue Books varied in shade until around 1966, when the company settled on a color close to Tiffany Blue.
According to Andrea Davey, the senior vice president of global marketing at Tiffany’s, it’s difficult to pinpoint when turquoise became associated with the company, and it’s unclear why, exactly, the founders settled on that particular shade. Yet she noted that as early as 1889, the company used the hue in its display at the World’s Fair in Paris. “The presence of the color at the fair could suggest that by the turn of the 19th century, this shade of blue was already associated with Tiffany & Co.,” she said. 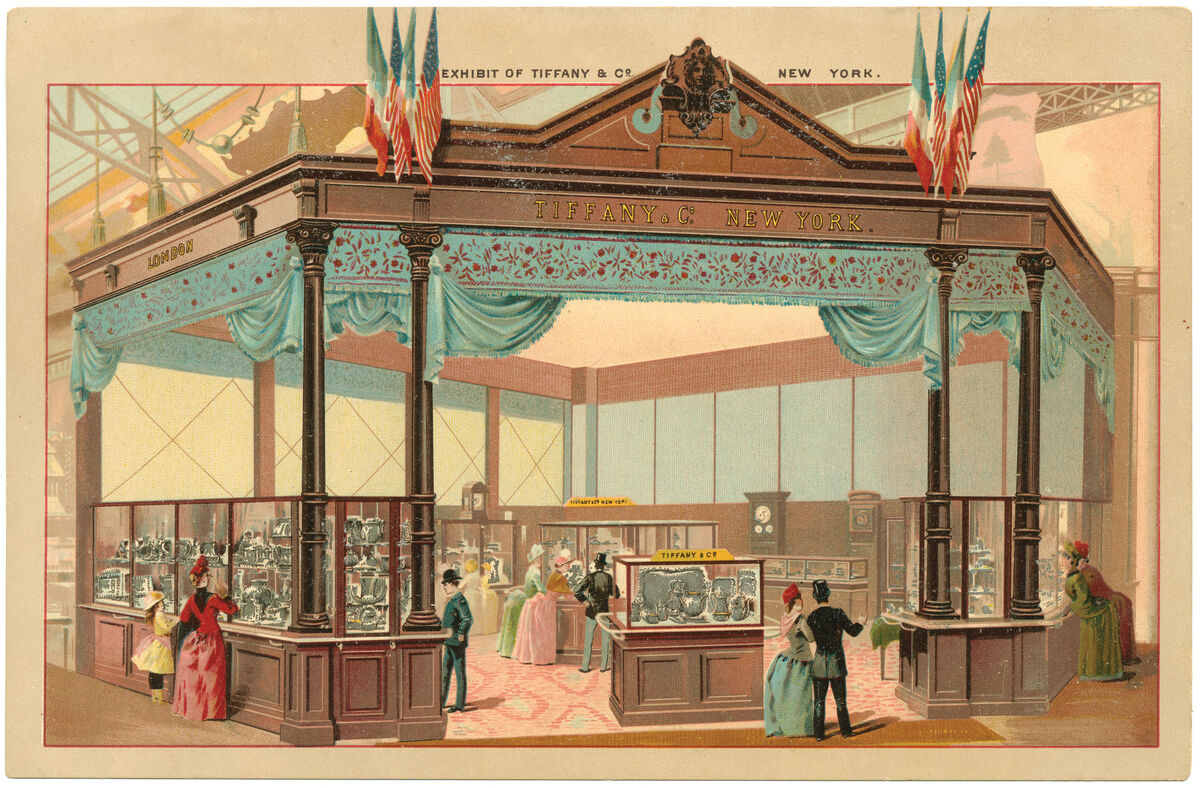 Advertisement
At the time, turquoise was a novel gemstone in America. In the late 1800s and early 1900s, miners discovered the mineral in the West and Southwest. Demand increased throughout the country, and prices rose. Across the Atlantic, Victorian brides gifted their attendants with turquoise brooches on their wedding days. The hue, perhaps, adopted connotations of both modernity and classic glamour, with a hint of the exotic: The ancient Egyptians had used turquoise in amulets and gold jewelry, while the Aztecs had crafted it into ritual masks.
An orchid-shaped Tiffany’s brooch from the time, now owned by the Metropolitan Museum of Art, came in an elegant turquoise case with cream-colored lining. Already, the company was linking the color with packaging—an early iteration of the now-iconic blue box, which Davey asserted is “recognized, admired, and loved around the world.” That isn’t just a marketing platitude: AdWeek once noted that the blue box “is very possibly the most recognizable and most desired retail container in history.” Charles Lewis refused to sell the boxes alone, enhancing their value as a symbol—you couldn’t receive one of the most significant symbols of love and commitment without the Tiffany’s box. 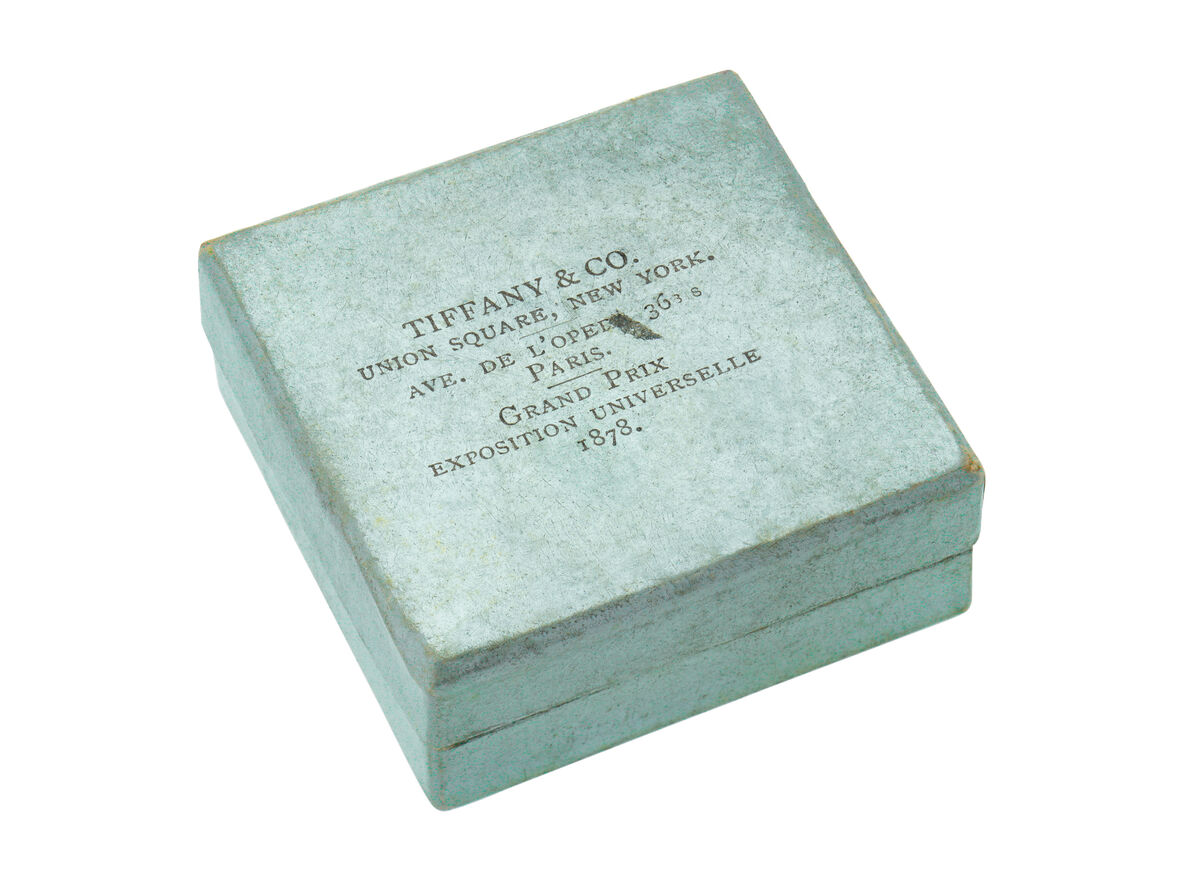 In 1998, Tiffany & Co. finally trademarked its color and packaging. Three years later, the brand partnered with Pantone to solidify its hue: “1837 Blue,” commemorating its founding year. “Tiffany has turned [its] distinctive shade into an international icon of elegance and sophistication,” Laurie Pressman, vice president of Pantone Color Institute, has said. “From the moment you set your eyes upon Tiffany’s cool and fresh aquatic blue shade, a color that speaks to vibrancy and escape, you are immediately transported into a world filled with luxury and delight.”
Tiffany’s need not update its branding strategies to retain its appeal, as Davey emphasized. “We are in a rare and enviable position, that consumers recognize the brand simply by seeing the color—even without any other brand identity,” she said. 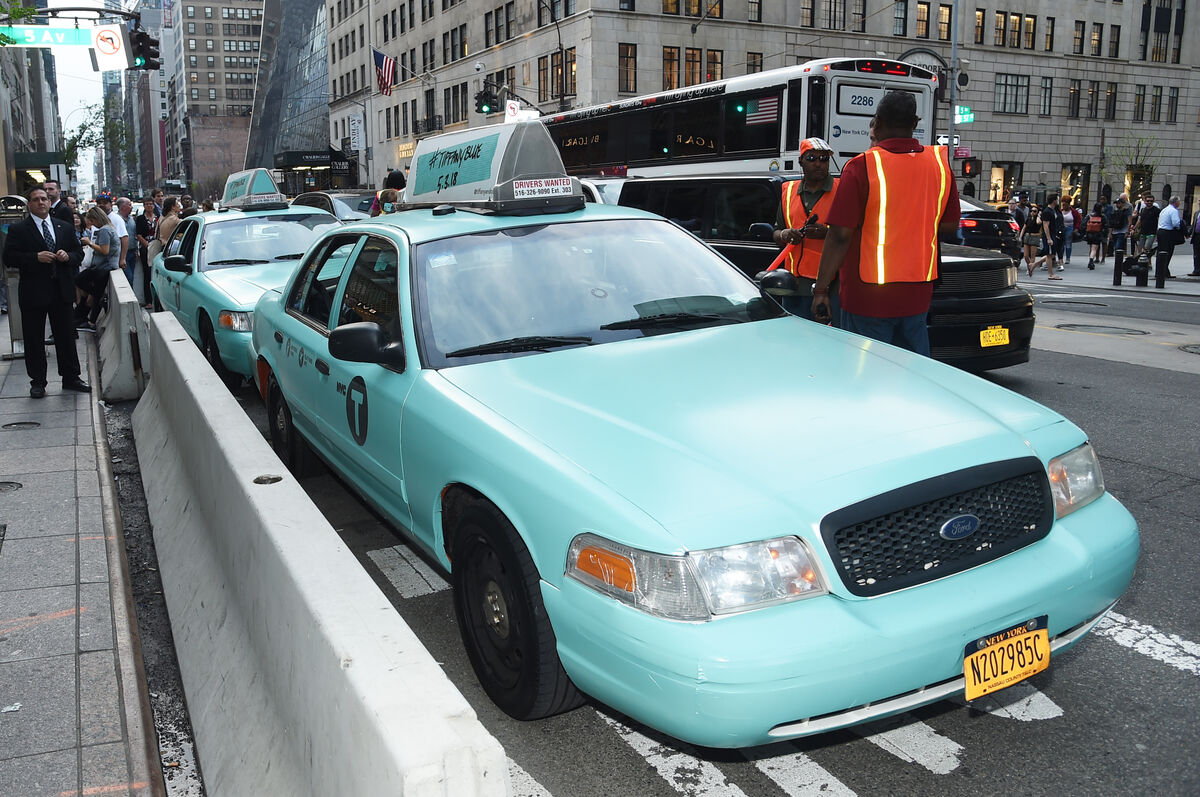 No other trademarked color has become so closely associated with its brand. The hue (RGB 82, 183, 189) is soft and feminine, but not garishly so; it’s playful and light, without being frivolous. Though corporations have successfully co-opted democratic objects and symbols—an apple, a swoosh, the number 57—none has claimed anything as simultaneously specific and broadly applicable as 1837 Blue: The company can paint anything, from taxis to storefronts, with its trademark color, and the significance will resonate. It’s a paradox that perfectly resonates with what Tiffany sells: jewelry with a definite weight and form, and a concept as mutable as love.
Alina Cohen
Correction: An earlier version of this article mistakenly used the word “patent” interchangeably with the word “trademark.” Tiffany blue, UPS deep brown, and T-Mobile magenta have been trademarked, not patented, and Nestlé opposed Cadbury’s application to trademark, not patent, Pantone 2685C for all of its goods.
Related Stories