When Timothy Leary Got Artists to Take LSD

Timothy Leary. Courtesy of the Timothy Leary Archives, the New York Public Library, and the Futique Trust. Excerpted from The Timothy Leary Project: Inside the Great Counterculture Experiment, published by ABRAMS. 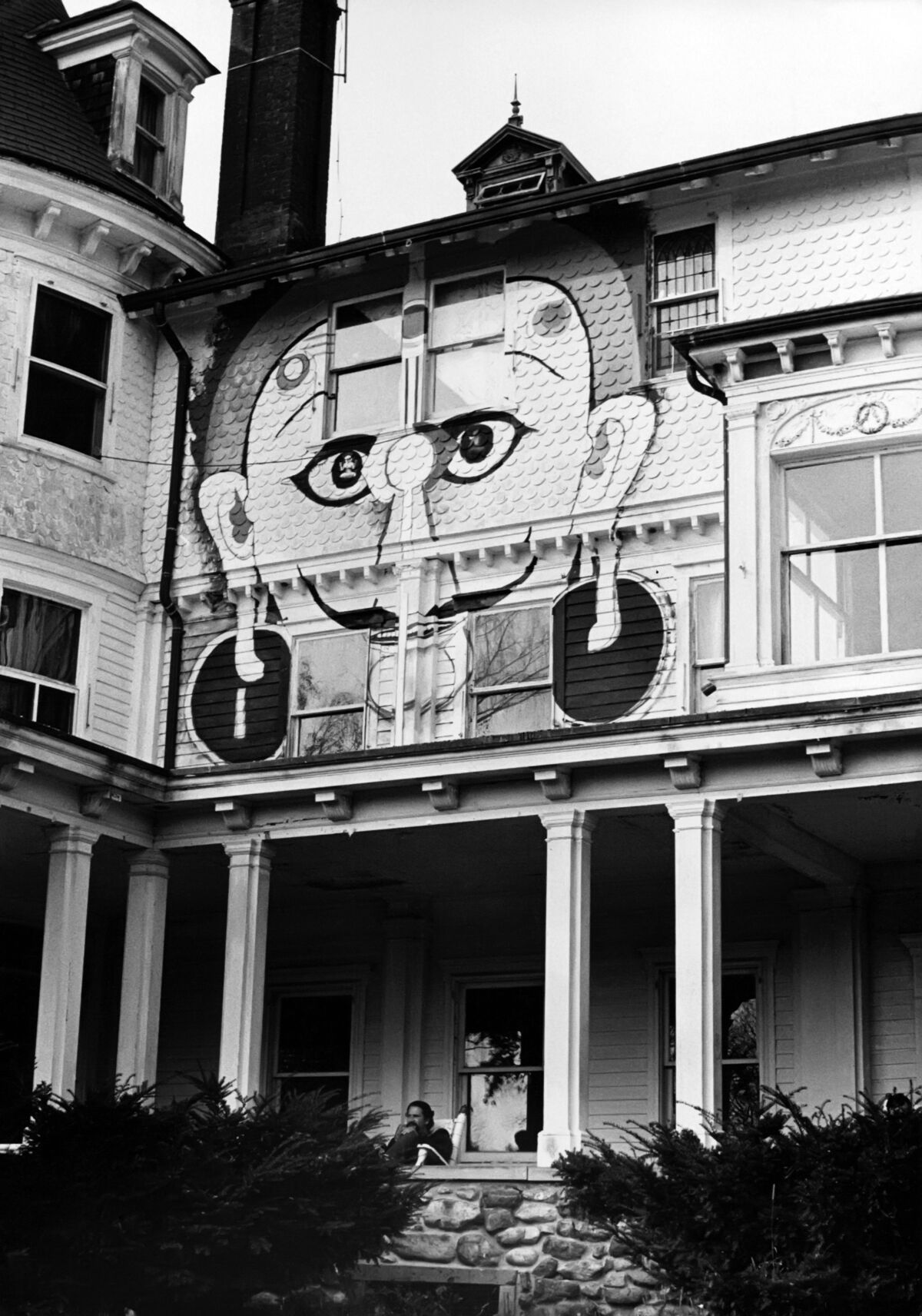 Timothy Leary below the porch of the Hitchcock Estate in Millbrook, New York, c. 1966. Courtesy of the Timothy Leary Archives, the New York Public Library, and the Futique Trust. Excerpted from The Timothy Leary Project: Inside the Great Counterculture Experiment, published by ABRAMS.

In the 1960s, a one-time Harvard researcher helped transform psychedelic substances into counterculture mainstays. Though even ancient cultures had used plants to produce hallucinogenic experiences, Timothy Leary gave psilocybin mushrooms and LSD a particular political and creative meaning. Ultimately, the drug-induced trips of the ’60s yielded a new aesthetic that still resounds throughout artistic practices today.
Leary, who’s associated with the iconic mantra “turn on, tune in, drop out,” was born in 1920 and graduated from the University of California, Berkeley, with a Ph.D. in psychology. He joined Harvard’s faculty in 1959, and a year later, at the age of 40, tried psilocybin mushrooms (“magic mushrooms”) for the first time. (Harvard eventually fired him.)
The middle-aged academic was so enthusiastic about the experience and its salubrious potential that he became, perhaps, psychedelic drugs’ greatest evangelist in the country, advocating their powers to aid “mind expansion.” As he infiltrated American bohemia, Leary helped establish our contemporary conception of creativity as a component of well-being, a quality to be unlocked by an open, receptive mind.
Experimental filmmaker
Jonas Mekas
, who met Leary once, doesn’t quite agree. “Creativity, who cares about creativity?” he told Artsy recently. “Art was even in the caves 50,000 years ago. Creativity has been part of humanity since the beginning. Timothy Leary did not invent it or change it. It comes from heaven.” 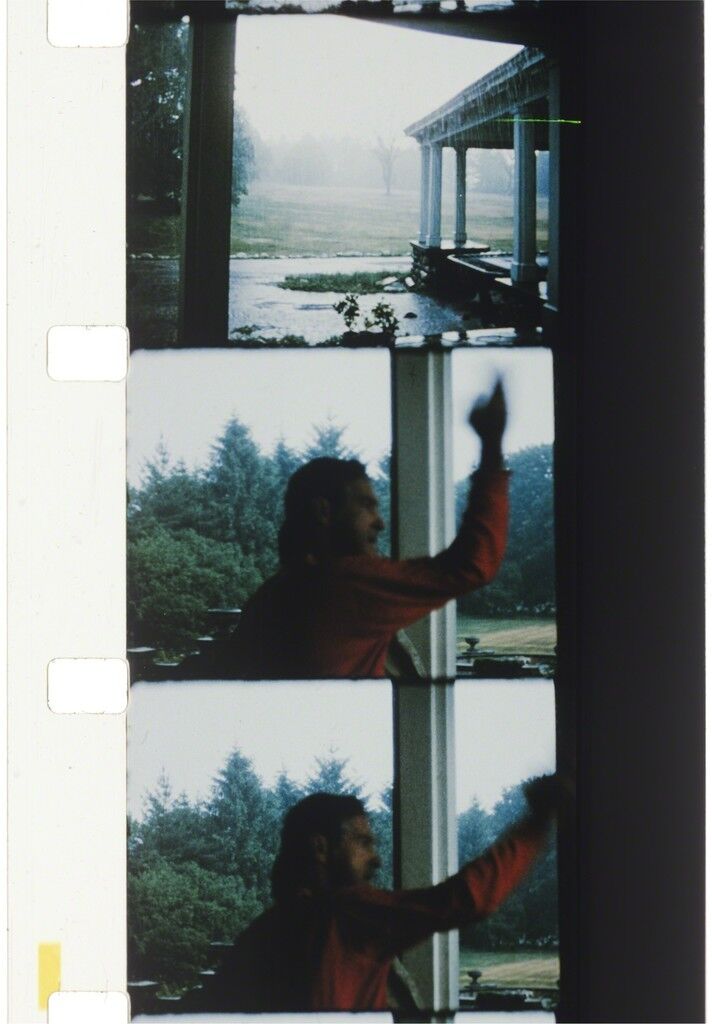 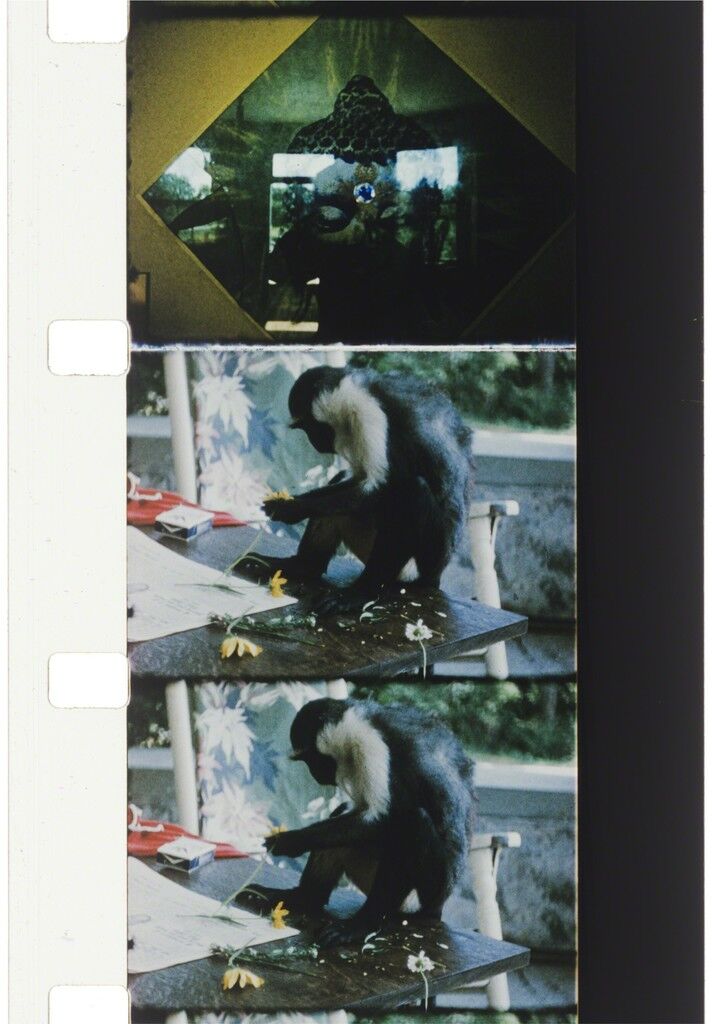 Jonas Mekas
From a Visit to Timothy Leary, Millbrook, 1965
Nina Johnson
In the summer of 1965, Mekas journeyed out to the Hitchcock Estate in Millbrook, New York, a commune of sorts where Leary had moved with Richard Alpert (now known as Ram Dass) in 1963. The setting was idyllic: lush fields, a 64-room white mansion with elegant green turrets, and a trampoline for the children. Leary and Alpert often hosted weekend workshops for what their brochures called “external support for consciousness expansion.” In addition to Mekas, notable artists from a variety of cultural realms—jazz musician Charles Mingus, writer
Allen Ginsberg
, and writer Ken Kesey and his band of “Merry Pranksters”—visited throughout the 1960s.
Mekas recalled a brief walk he took with Leary, who offered to supervise him if he wanted to try LSD. “I said no, I do not want to take LSD, because my greatest drug experience was Rimbaud,” Mekas said, referring to the French poet. “Rimbaud sent me to inner spaces, and no matter what I try, nothing did what Rimbaud did to me.” They walked in silence back to the mansion, and Leary didn’t bring up LSD again. Instead of tripping, Mekas read and shot footage for the rest of his time in Millbrook.
Later, Mekas overlaid his quick, disjointed clips of the tranquil setting with audio from a real interview between a journalist and a sheriff who’d raided the mansion (assistant district attorney G. Gordon Liddy, who ultimately went to prison for his involvement in the Watergate scandal, instigated many raids on Millbrook throughout the 1960s). The sheriff describes the mansion as a den of iniquity, a humorous contrast to Mekas’s shots of dewy grass and happy kids. Through the ironic juxtaposition, the filmmaker underscored the tensions between the era’s authorities and counterculture activists.
Eventually, in 1966, Mekas did try LSD. Filmmaker and performance artist Barbara Rubin (who also famously introduced Andy Warhol to the Velvet Underground) supervised the trip. Mekas wasn’t enamored. He pointed out that psychedelics were really more popular on the West Coast, that their impact has been somewhat exaggerated in popular culture. 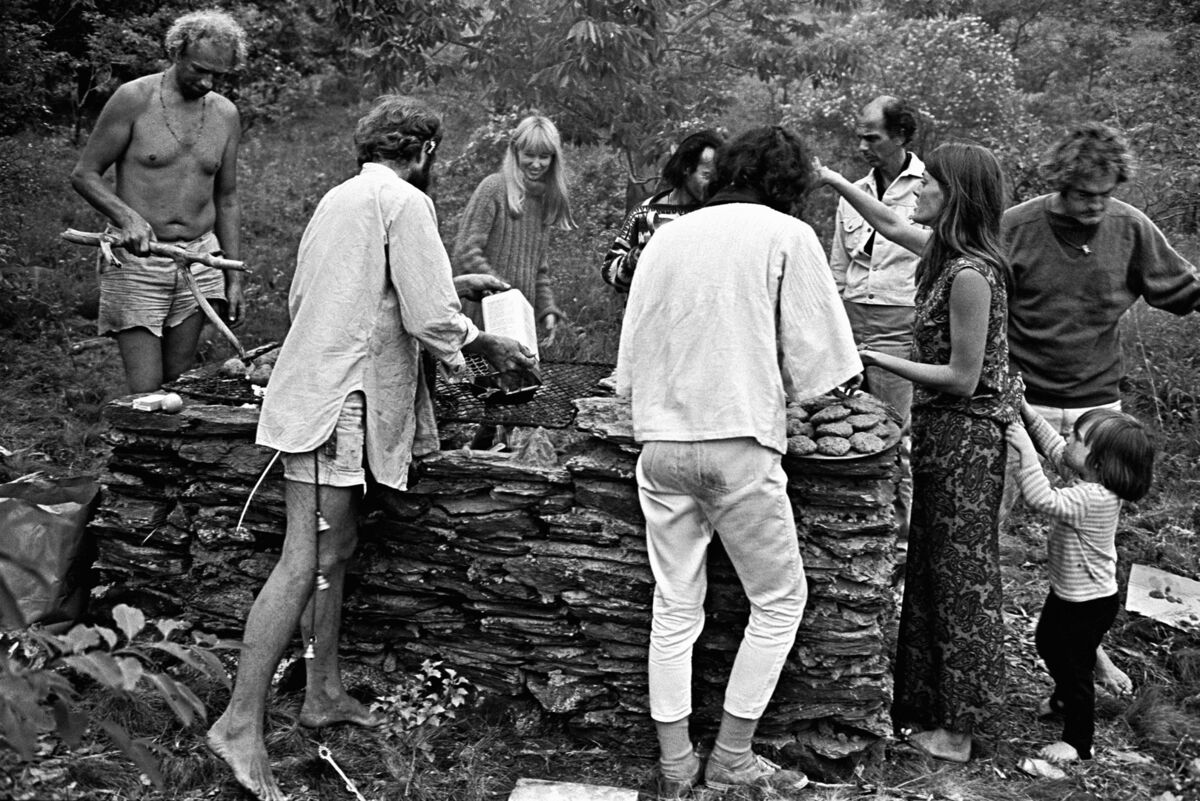 Timothy Leary with Rosemary Woodruff standing next to him during a communal dinner at Millbrook, New York, 1967. Courtesy of the Timothy Leary Archives, the New York Public Library, and the Futique Trust. Excerpted from The Timothy Leary Project: Inside the Great Counterculture Experiment, published by ABRAMS.

Advertisement
A new book of collected archival material and commentary, entitled The Timothy Leary Project: Inside the Great Counterculture Experiment, evidences that at least a couple
Abstract Expressionist
painters were more enthusiastic about acid than Mekas was. On December 31, 1960, Allen Ginsberg wrote to Leary, “[
Willem de Kooning
] said a month ago he wanted to try mescaline-type drugs. If you’re in NY while I’m gone, phone him.…I saw
Franz Kline
yesterday & explained the situation, he said he was ready to turn on any-time.” In January, Ginsberg followed up with specific instructions on how to reach the elusive de Kooning. “If you phone, ring twice, hang up & ring again,” he wrote.
Throughout the era, artist
Adrian Piper
dabbled and made colorful, fractured self-portraits.
Yayoi Kusama
created her psychedelic mirror rooms and surrounded herself with LSD users (whether she herself indulged is unclear). Directly inspired by Leary’s theories of art, she created a performance called Self-Obliteration (1967) in which she covered herself and other objects with polka dots. Her mirror rooms also manifest her interest in psychedelic perception.
In his 2011 book Are You Experienced?: How Psychedelic Consciousness Transformed Modern Art, Ken Johnson argues that even
Robert Smithson
’s Spiral Jetty (1970) and
Richard Serra
’s massive steel sculptures are in debt to hallucinogenic aesthetics. Admittedly, LSD didn’t help all the artists who took it:
Peter Doig
used it in high school and literally dropped out.
Leary, for his part, faced charges of drug possession beginning around 1965, getting arrested many times but escaping significant jail time (and lobbying publicly for support). He seemed unconcerned with the allegations, appearing in public to support the era’s radical, peace-promoting discourse. Leary got evicted from Millbrook in 1968 and simply grooved on. He attended one of
John Lennon
and
Yoko Ono
’s famous “Bed-Ins” in Montreal the next year, in which the couple stayed in bed, protesting America’s ongoing aggression in Vietnam. Alongside Ginsberg, Leary sang Lennon’s anti-war tune, “Give Peace a Chance.” 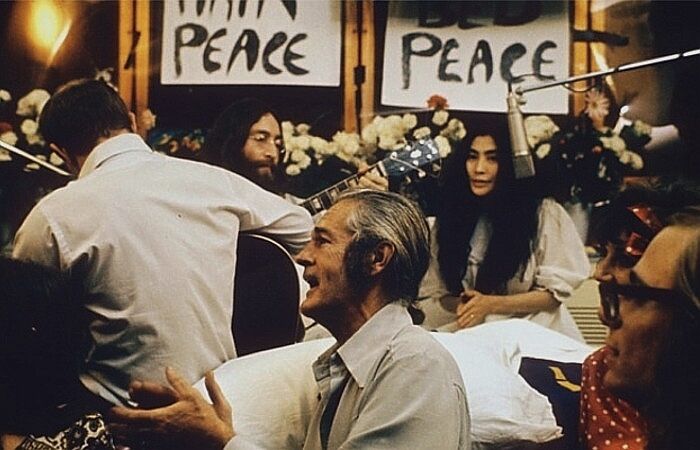 Yet as the decade came to a close, major changes occurred nationwide, and in Leary’s personal life. Disco culture emerged, and the era-defining drug of choice shifted from LSD to cocaine. Leary finally went to jail for drug possession in 1970, but escaped from the institution with the help of a radical activist organization called the Weathermen (or the Weather Underground). He found refuge in Algeria with Eldridge Cleaver and the Black Panthers.
American narcotics agents eventually recaptured Leary in Afghanistan, and Leary returned to prison in 1973. His plight amplified his fame, and Governor Jerry Brown pardoned him in 1976. But by 1980, Leary’s star had fallen enough to necessitate a new book entitled Whatever Happened to Timothy Leary?
If you’re wondering what happened in the following decades, Leary moved to Los Angeles, dabbled in politics, raised a family, and eventually—throughout the 1980s and ’90s—got into computers.
The psychedelic advocate died in 1996, but over the past few years, “microdosing”—taking small amounts of psychedelics—has made the substance popular again. A recent onslaught of articles, podcasts, and books about the benefits of psychedelics suggests that Leary was really onto something. Within the past few years, writers from Ayelet Waldman to Michael Pollan have published first-hand accounts of their beneficial experiences with the drugs. 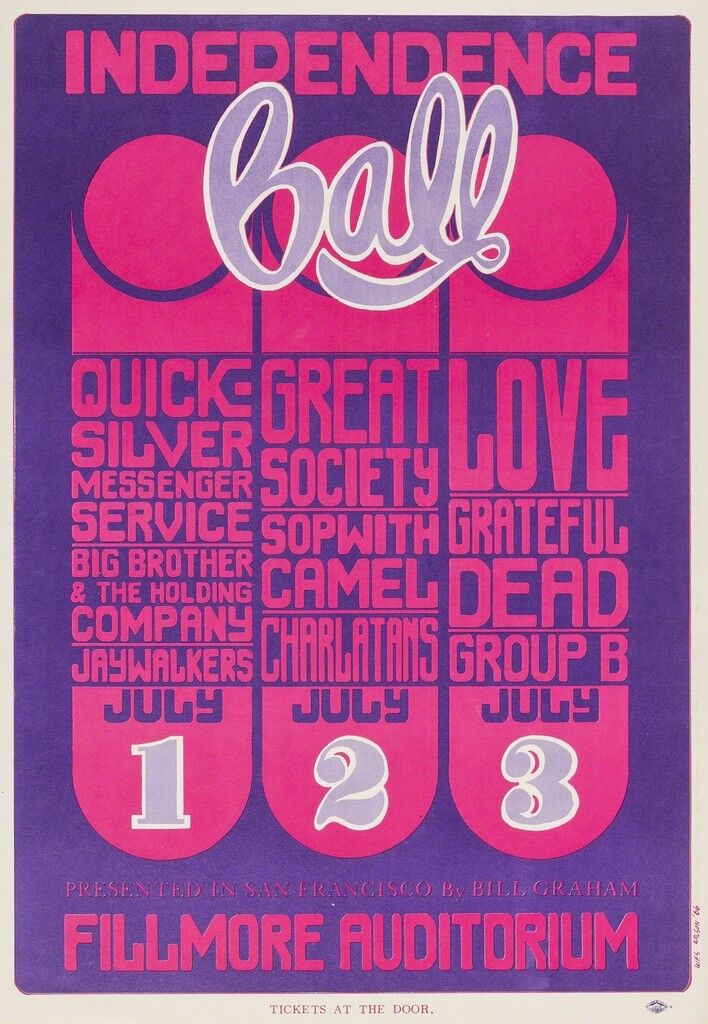 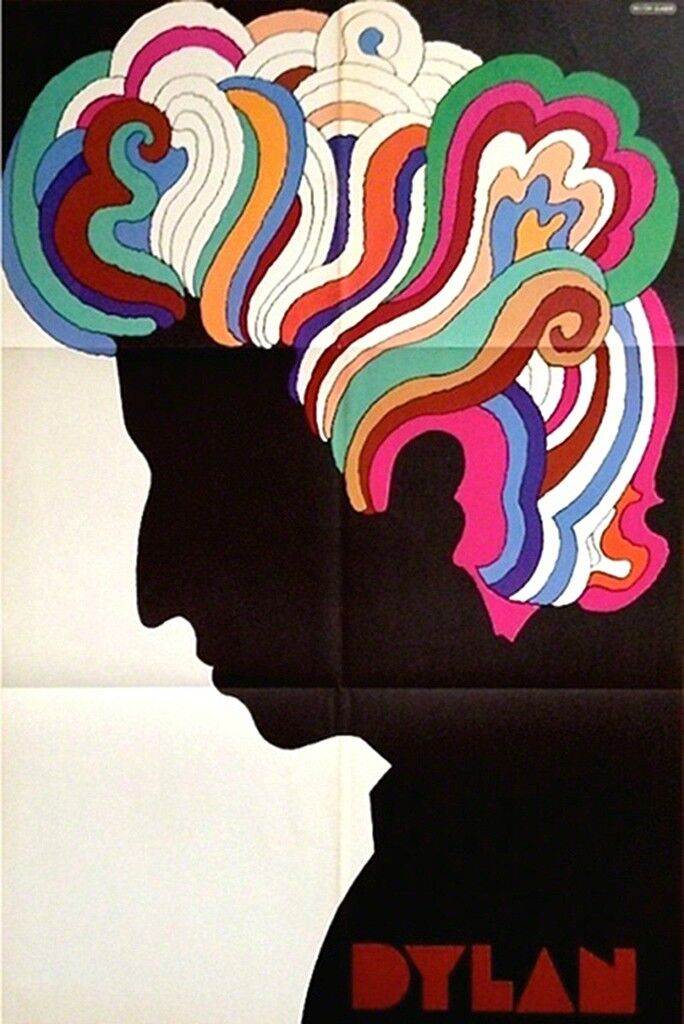 Milton Glaser
Bob Dylan, 1966
michael lisi / contemporary art
In Pollan’s new book, How to Change Your Mind: What the New Science of Psychedelics Teaches Us about Consciousness, Dying, Addiction, Depression, and Transcendence, he writes about how researcher James Fadiman even developed an optimal “creativity dose”: 100 micrograms of acid. (Caution to the inexperienced: A typical acid dose is between 50 and 150 micrograms, according to the major psychoactives website Erowid.org, while another outlet suggests 300 micrograms for confident users.) Silicon Valley, in particular, has embraced microdosing as an innovation-enhancer.
“The whole notion of cybernetics, the idea that material reality can be translated into bits of information, may also owe something to the experience of LSD, with its power to collapse matter into spirit,” Pollan writes. He suggests that it’s not just individuals, but entire occupational communities who can use psychedelics to think differently about their fields of study. (Leary himself manifested an interest in technology: In the 1980s, he developed about a dozen video games, one of which included graphics by
Keith Haring
and writings by
William S. Burroughs
.)
In a new memoir about his experiences with psychedelics, entitled Trip: Psychedelics, Alienation, and Change, Tao Lin describes how this drug-induced creativity works on an internal level. He writes, “Psychedelics I would immediately rate 10 on a 1–10 scale for boredom relief.…They seem to catalyze the imagination through stimulation…but also at least two other ways, bringing in emotion and the unconscious.” He distinguishes psychedelics from drugs and promotes the compassionate feelings and mystical experiences generated by the former. Even if Lin doesn’t discuss him directly, Leary’s spirit pervades the book. 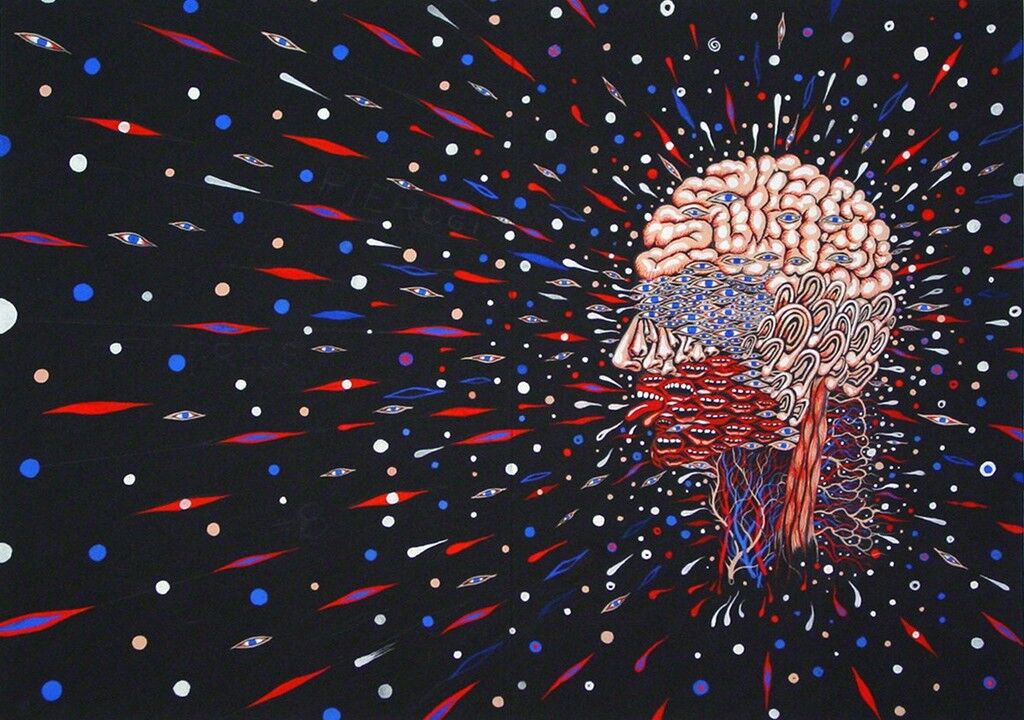 Fred Tomaselli
Untitled, 2003
James Cohan
For contemporary artists, LSD still offers creative possibilities. Before giving it up in 1980, painter
Fred Tomaselli
was known to indulge. “LSD had been a formative influence on how I saw the world,” he once told the Brooklyn Rail. “LSD has colonized part of my DNA and I’m trying to put that into my work.” And cartoonist
R. Crumb
credits acid trips with the style he maintains today: He’s said that recurring acid visions continue to inspire him.
As for the younger generation, Jonah Freeman & Justin Lowe once developed an entire immersive project, “Bright White Underground,” creating a kind of LSD “safe house” as they infiltrated and redecorated Los Angeles’s modernist Buck House.
But psychedelics may have had the greatest effect on graphic design, advertising, and paper-based art.
Wes Wilson
and
Milton Glaser
, for example, created posters, logos, and campaigns filled with bright colors that appeared to vibrate or swirl (Wilson, at least, used acid himself). The style owes much to the hallucinatory visions offered exclusively by psychedelics—these experiences, ultimately, gave hipness its own enduring visual language.
Alina Cohen
Related Stories

The Complicated Relationship Between Opium and Art in the 20th Century 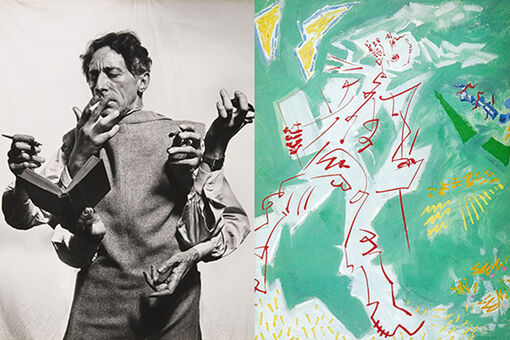 The Complicated Relationship Between Opium and Art in the 20th Century
Jeff Goldberg
May 4, 2018 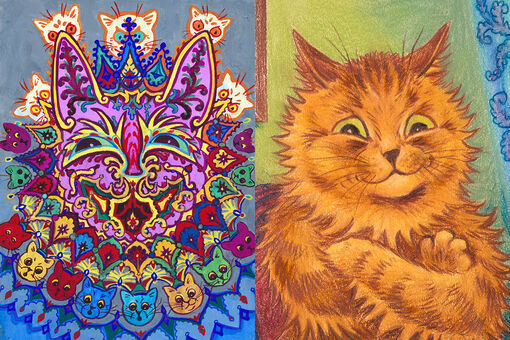 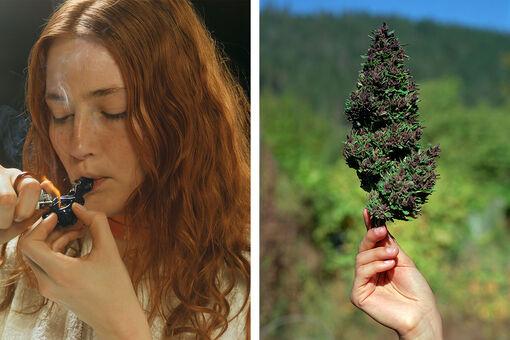