Portrait of Kristen Wentrcek and Andrew Zebulon. Courtesy of the designers.

With today’s hypersaturated cultural schedule, it’s not unusual for gallery openings to compete for visitors. Crowded art fairs and blockbuster museum shows can start to seem designed for little more than generating Instagram stories. But how meaningful, really, is a packed house, when no one can even see the art—let alone spend time considering it?
That’s one question at the heart of Intermediate States (2017–ongoing), the latest—and largest-yet—work by Kristen Wentrcek and Andrew Zebulon, an artist duo with a practice rooted in design. Over the past six years, the pair has developed a hard-edged, minimalist, and aggressively anti-trend take on furniture that revels in the unorthodox use of industrial materials: a table with a wire glass top that almost dares you to place something on it; a chair with a cast polyurethane rubber seat that looks like a slab of aspic ready to slide off its Corian frame. Along the way, their profile has risen through the New York design scene, with repeat appearances at the Sight Unseen Offsite fair and designs for the likes of kinder MODERN and the AutoCamp resort.
And now Wentrcek and Zebulon are rethinking the conventions of the art world itself. That’s why they’ve transformed their own studio into an immersive installation, open to the public in a series of under-the-radar, invite-only events that began in December 2017 and will continue into the spring, unveiling their work to only eight viewers at a time. Consider it the anti-opening art opening. 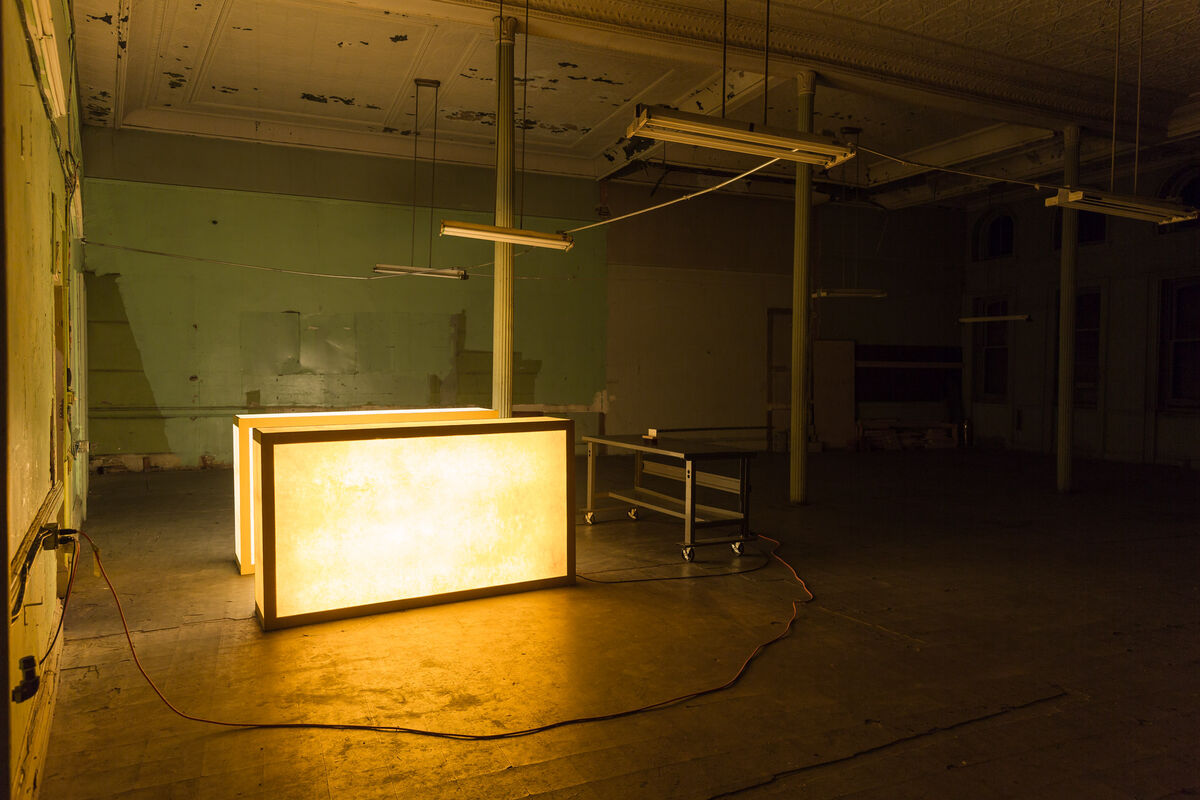 “It’s nice to be able to take a look at the game and [say], ‘We’re not going to play that game this time. We’re going to take our time,’” Wentrcek says of the pair’s approach to the piece, which took about seven months to complete.
That on-our-own-terms ethos led to the series of events they’re using to share the work with the public, Zebulon says. “We wanted something immersive and environmental, and we also had this long-standing grudge against openings. It just kind of sucks: The opening happens, everyone comes, stands around and drinks beer, and you don’t really feel like people get a lot of time to really see the whole point of them being there.”
The point of Intermediate States—that is, the work itself—consists of a room-sized structure built of panels of backlit, hand-poured fiberglass, the form of which evokes a tea room or sauna. It’s meant to be experienced from the inside, where there’s a unique seat waiting for every guest. Wentrcek and Zebulon built the structure, which they joke takes up around 80 percent of the room in their Bed-Stuy studio, simply because they wanted to. “It’s about the execution, and then just leaving it,” Wentrcek says, referencing the way
Land Art
can simply exist for people to encounter—or not. “You don’t really look at it, so much as get into it,” adds Zebulon. 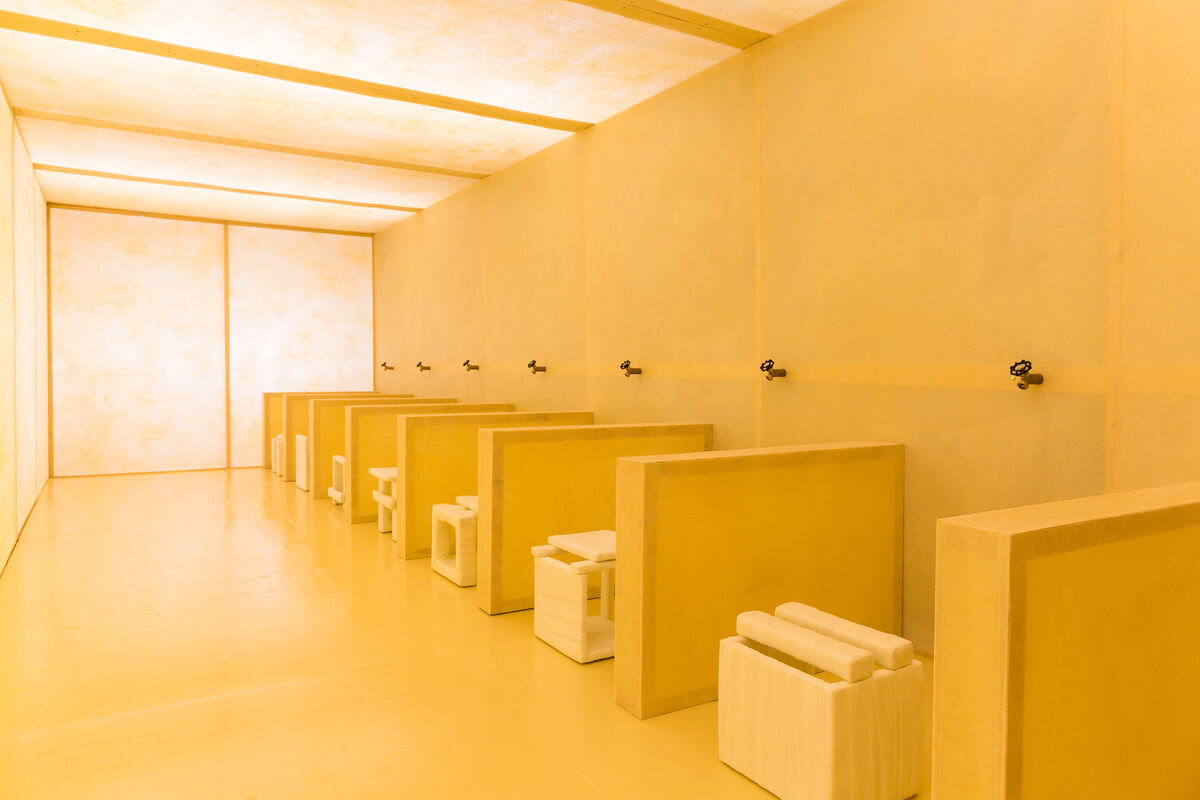 Advertisement
On the night I visited, my husband and I arrived to find six strangers milling around the darkened studio. With the exception of a pathway formed by glowing fiberglass rectangles, the space looked much the way it does when it’s not an art installation: crumbling architectural details painted a shade of seafoam; bricked-up windows climbing to the soaring ceiling.
The artists were nowhere to be seen, adding an element of mystery to the affair, which felt like something between a pilgrimage to a holy site and a trip to Willy Wonka’s factory. A stack of notecards on a table near the entrance detailed the evening’s parameters; following their instructions, we made our way upstairs at precisely 8:15 p.m., moving through a glowing tunnel—made of the same backlit fiberglass used in the smaller pieces downstairs—to a niche where an empty drinking glass awaited each participant.
Retrieving our glasses, we continued down a corridor that expanded into a room with eight chairs made from the medical cast tape doctors use on broken limbs. Light streamed through the walls, creating shifting effects that made their surfaces resemble marble, shoji screens, or animal hides. Everyone waited, giddily, to see what would happen next—unsure how, if at all, to interact with the space, or if the artists would make an appearance (they don’t until it’s over, and time to “break the spell”). 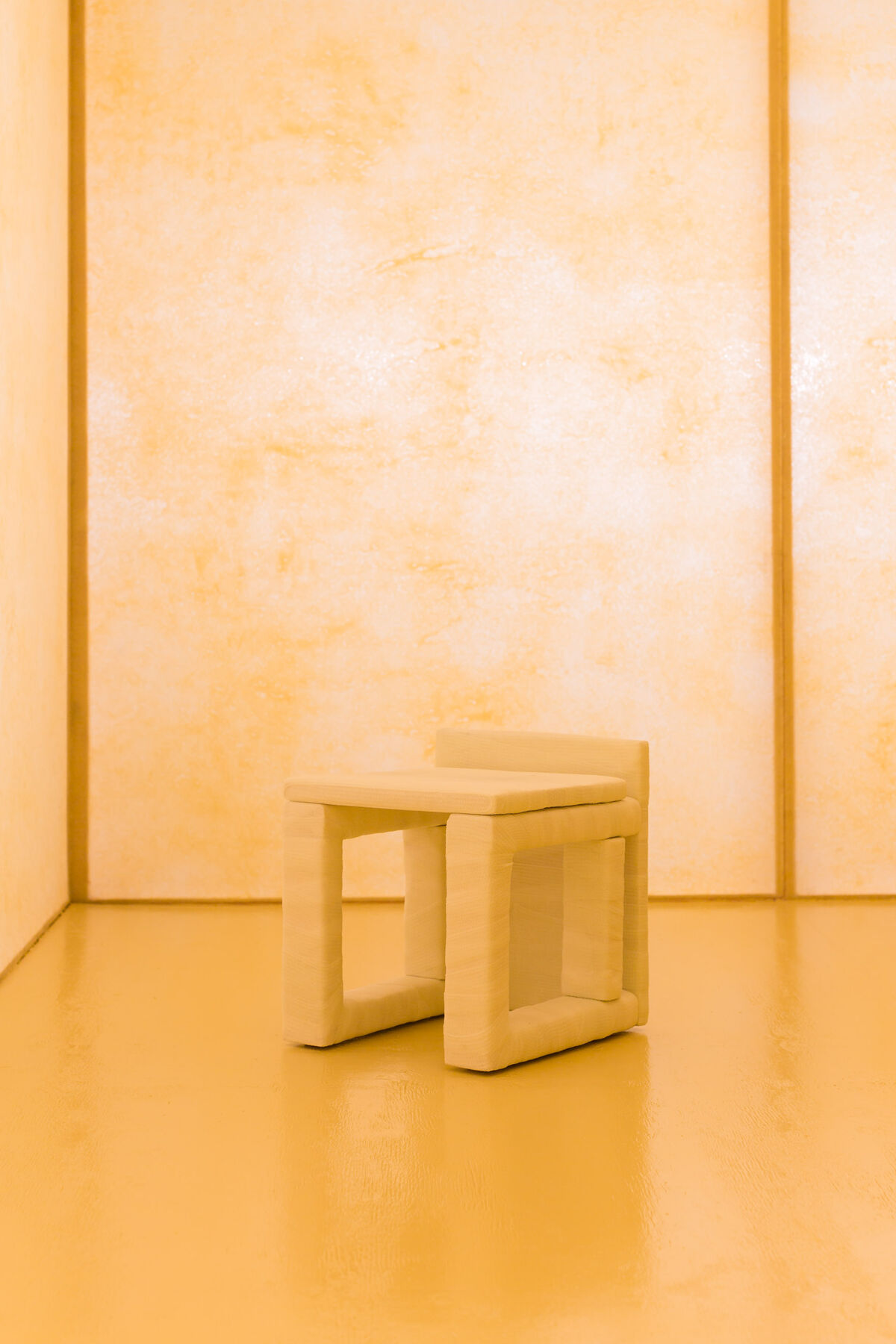 A tiny amber light near each seat flicked on, signaling visitors that it was time to pick up their glass and open up an accompanying valve, sending syrupy brown liquid (a Manhattan cocktail, Zebulon later told me) flowing from the spigots. Everyone started talking. Some walked around, taking in details up close and touching the surfaces, while others stayed in their seats, as if waiting for further instruction. It felt novel, not gimmicky—Zebulon and Wentrcek were careful not to “gameify” the situation—and the shared sense of the unknown created a feeling of immediacy and intimacy heightened by the location within the artists’ own studio.
To create a situation that encourages sustained engagement with their installation, the pair borrowed the best elements of openings—a time for critical thinking, dialogue, and, of course, free alcohol—and set them to an intimate scale. And though Intermediate States might superficially conjure
Happenings
or the relational performances of someone like
Rirkrit Tiravanija
, that’s not really the goal. To Wentrcek and Zebulon, the performative elements are more about creating an open-ended entry point for the viewer. In fact, they don’t even watch or listen to what the visitors do inside the space; they’re busy keeping things moving behind the scenes.
While the pared-down guest list means that many people won’t have a chance to directly experience Intermediate States in person, those who are curious can still appreciate Wentrcek and Zebulon’s next major installation: a site-specific piece for the entrance of the Collective Design fair, which runs from March 9th through 11th. Made of similar materials and forms as Intermediate States, the new piece is also meant to evoke a transitory state: that eerily familiar feeling of locker rooms and other places you stop on your way to somewhere else. Only this time, Wentrcek and Zebulon have conceived of the installation as a series of faceted and lit-from-within modules that they’ll arrange for visitors to walk around and through.
While Wentrcek and Zebulon aren’t sure what will come next after Collective, chances are it won’t be what’s expected of them. “A lot of people wait to get discovered, try and show stuff to people, and do a ton of group shows,” Wentrcek explains. “We were lucky enough that we had a big enough space where we could say, ‘Well, fuck that. We’ll just make it.’”
Heather Corcoran
Related Stories