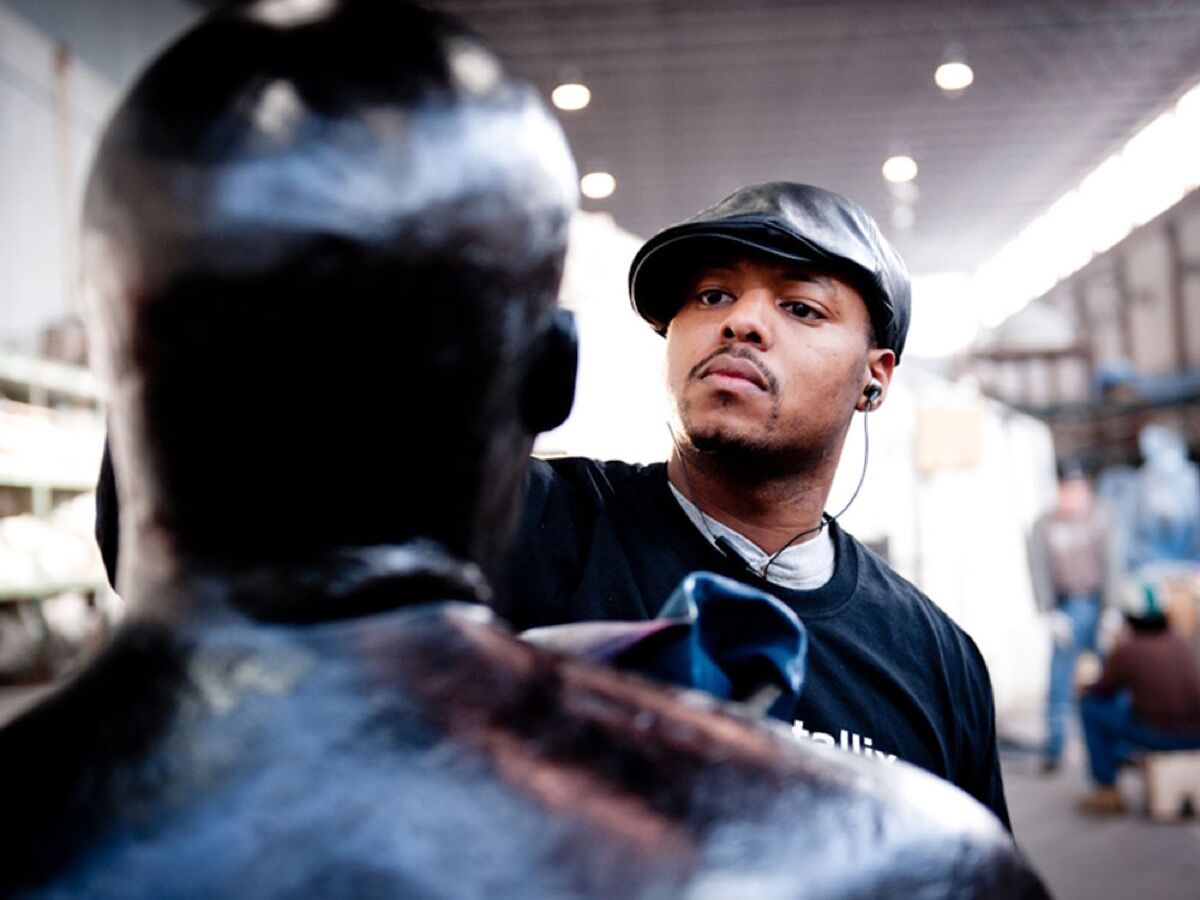 Titus Kaphar. Courtesy of the artist.

As he typed “Destiny” into the search bar of a state and federally maintained prison database,
Titus Kaphar
thought about how the promise parents have for their children is often reflected in the names they give them.
The query returned a screen filled with mug shots of women, mostly black, who had been convicted of varying felonies or were awaiting trial, plus their criminal records and personal details—full name, age, height, weight, race, date of birth, scars, piercings, and tattoos. Kaphar began to paint many of the women and created a new, six-part series of portraits, titled “Destiny” (2016), which is now part of his two-venue painting and sculpture exhibition, “Shifting Skies,” at Jack Shainman Gallery in New York.
“In a way, the ‘Destiny’ series, takes something that was never intended to be aesthetic, never to be beautiful, but intended to be the lowest form of representation and turns it into something else,” Kaphar tells me, as he stands in the 24th-street gallery surrounded by these portraits. In the exhibition, the 40-year-old artist, who’s now based in New York and Connecticut, takes the images that “memorialize criminality” and transforms them into art that tells the story of the tragedy of our criminal justice system. Destiny II (2016), for instance, features several different Destiny’s, with locks, braids, and straight hair pulled back, that together form one, blurred face with multiple sets of shifting eyes, mouths, ears, and noses. The images are set against a flickering blue background, the backdrop the women stood before to have their mugshots taken.
“I was attempting to take multiple Destiny’s and layer them one on top of the other,” says the artist, who received his MFA in painting from Yale. “Their different destinies have tragically come together in this horrific conclusion of jails and prisons,” he adds. “When I was thinking about the series, I was remembering women’s names: my cousins, friends, and family, names that I knew in the African-American community. All I remember is when I said it out loud—Destiny—the poetry of it wasn’t lost on me.” 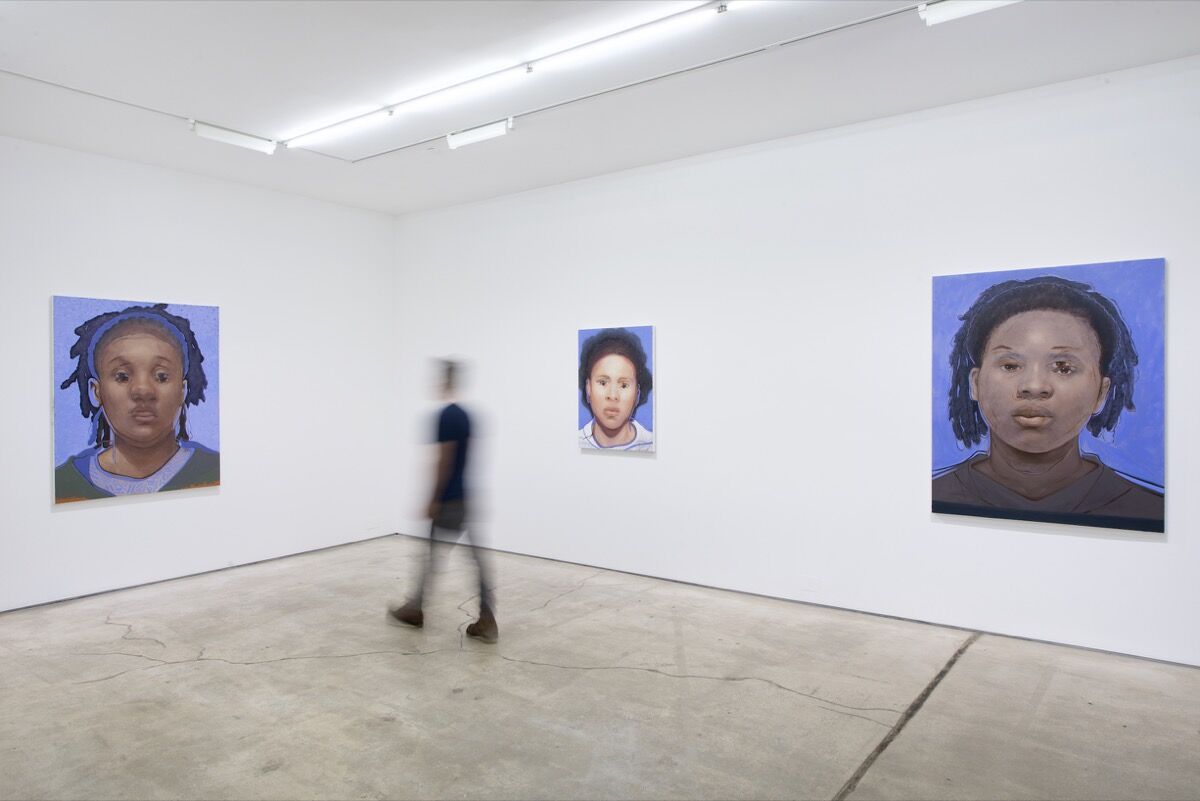 Kaphar’s interest in portraying prisoners began a few years ago. After two decades of not speaking to his father, the artist first used the prison database to look him up. His father, Jerome, and 99 other men, who shared the same first and last name, appeared in the search results. Astonished, the artist was inspired to create “The Jerome Project” (2014), a series of confessional-style paintings of mug shots of prisoners who had all been convicted and jailed for committing nearly identical crimes. He covered some of these portraits with varying layers of tar, accented with flakes of gold leaf—a symbolic gesture to reflect the amount of time the men have spent behind bars. Mounted together, as they were at the Studio Museum in Harlem in 2014, the paintings demarcate what it means for nearly a million black men and women to serve prison sentences for committing mostly non-violent crimes. In Jerome I (2014), the tar climbs up to the figure’s chin, while in Jerome V (2014) half of the 10-inch painting is obscured, suggesting that the relatively young man had spent half of his life in prison. Later, aware of the ongoing hurdles and aftereffects that former prisoners face after being released, Kaphar stopped using the tar.
For the 2016 female-focused series, Kaphar returns to this fact of American life: The United States penal system disproportionately arrests, sentences to harsher penalties, and mass incarcerates its black citizens. The works draw on a tradition propelled by artists like
Kerry James Marshall
,
Philip Guston
, and
Jenny Saville
, who have each explored issues of race and identity. Saville’s portraiture, for example, shares a similar sense of multiplicity with Kaphar’s technique.
Recently, other artists, like Kaphar, have made work that ties the phenomenon to slavery. (“If you understand the criminal justice system, you will immediately know those historical paintings over on 20th Street are the reason why we have these systems we have today,” Kaphar offers, gesturing to his signature racially charged revolutionary-style paintings being shown at Jack Shainman’s 20th street gallery.)
Cameron Rowland
’s 2016 solo exhibition, titled “91020000,” at Artists Space displayed slave insurance bonds and objects—school desks, church pews, sewer rings, firefighter uniforms, among other goods—created for the public by prisoners who are paid between $0.10 to $1.14 per hour in New York State. The filmmaker Ava DuVernay’s recent documentary, 13th (2016), posits powerfully that the initial rise in mass incarceration is due to an exception clause, or what the director calls, a “loophole,” in the amendment that ended slavery. It reads:
“Neither slavery nor involuntary servitude, except as a punishment for crime whereof the party shall have been duly convicted, shall exist within the United States, or any place subject to their jurisdiction.” 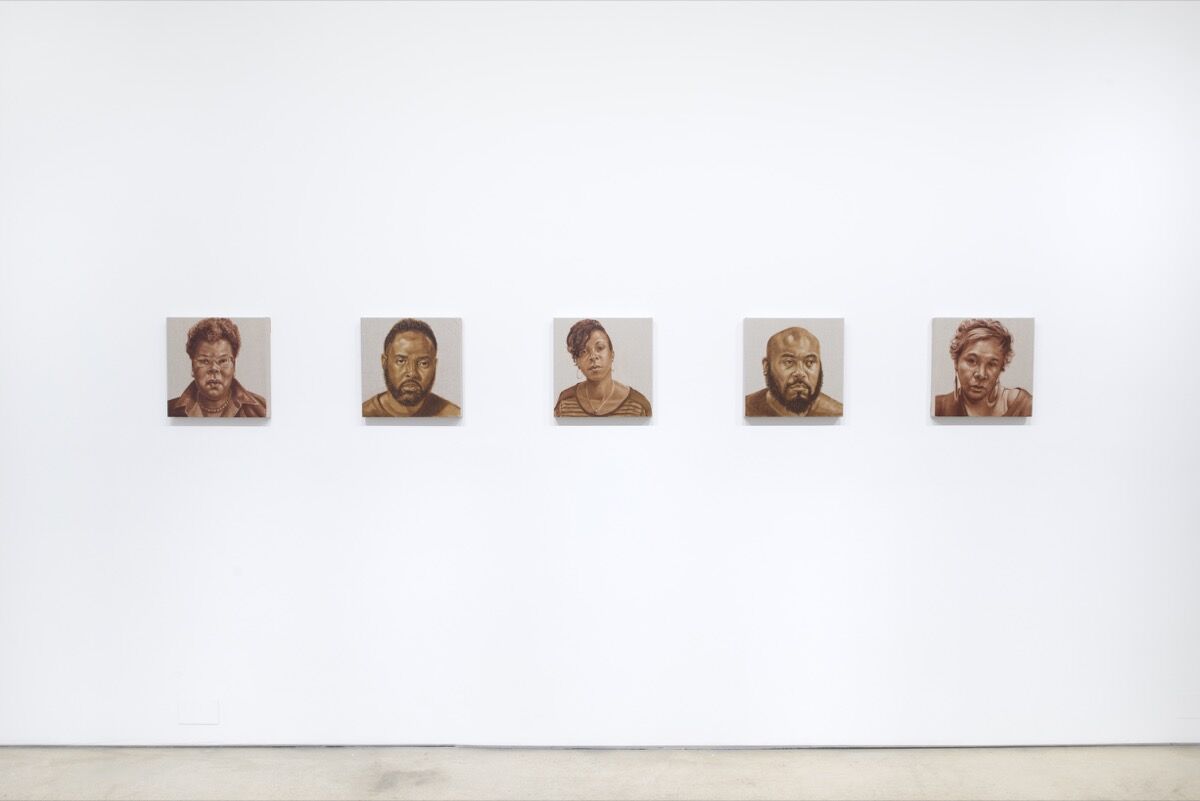 Advertisement
“The 99 Jeromes could easily be 99 Tyrones,” says Kaphar, reflecting a growing knowledge of the criminal justice system. “What I realized in working on the project about my father, was that his name wasn’t really significant. What was significant is the degree to which that name functions as a racial identifier. So anytime you choose a name and type it into these databases you get similar results.” He says, “If you do Tyrese, Tyrone, Chanel, or any of the names that are traditionally associated with black folks, you get similar results. Particular groups are, to a degree, being targeted, and find themselves similarly stuck in the system.”
Toward the front of the gallery, Kaphar points to a series of five small brown portraits and says, “This is my hope.” The works picture men and women—Vivian D. Nixon, Reginald Dwayne Betts, Shontina Vernon, El Sawyer, and Asha Bandele—some of whom were formerly incarcerated, who are now all working to improve the criminal justice system and the lives of those who are impacted by it. The simplistic portraits represent “an optimistic celebration of the potential” for Kaphar. “We speak so much about the destruction but there are survivors, and those survivors go on to do amazing things in the world.”
A few minutes later, one of those survivors, Reginald Dwayne Betts, along with his wife and three young boys walked into the gallery. When Betts was a teenager, he carjacked someone and spent nearly nine years in adult prison for committing the crime. “This recalls a particular part of my past,” Betts tells me. “For me, this is about the journey of my own life.” Eventually, Betts, now 36 and a lawyer, wrote several books including a memoir, A Question of Freedom: A Memoir of Learning, Survival, and Coming of Age in Prison (2010), which details his time spent in solitary confinement. 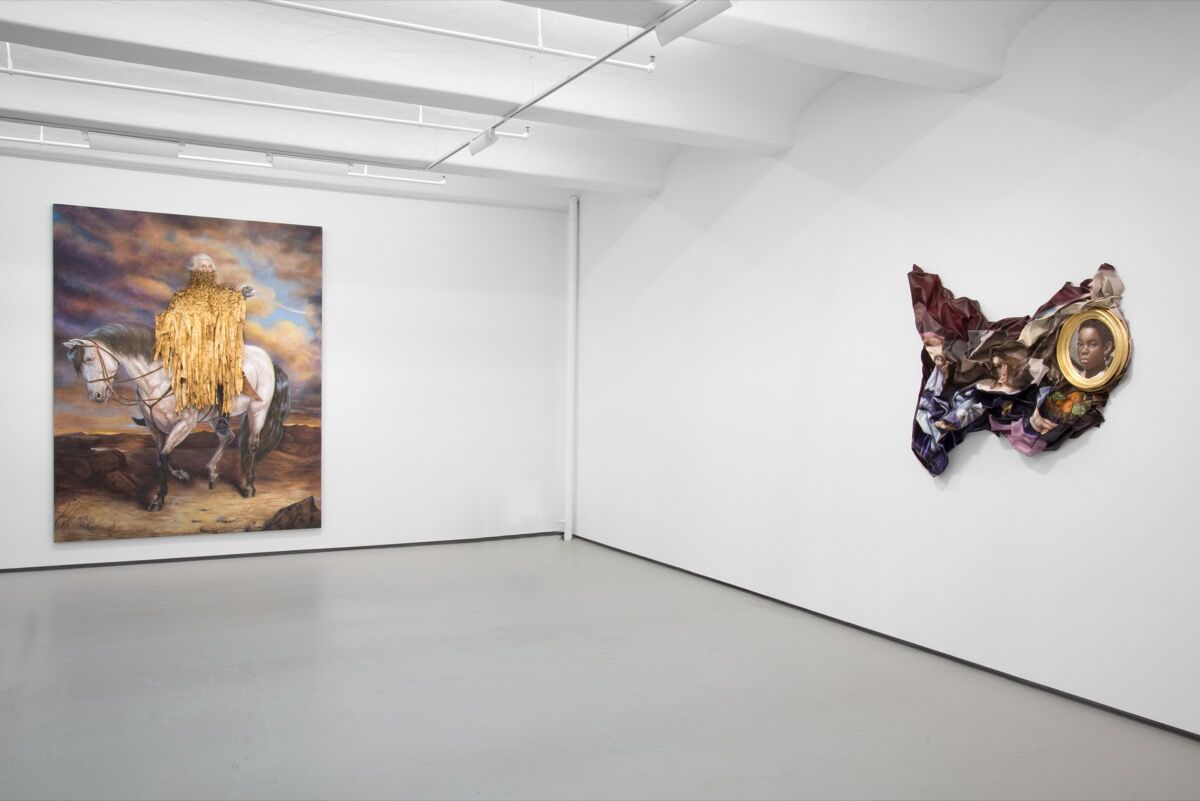 “I have a client right now, 17 years old, facing felony charges, so I work with the Destinys on the wall,” Betts, who recently earned his degree from Yale Law School, says as he gestures to the paintings. “We have been living through these struggles for a long time and it didn’t seem like these stories mattered to a larger landscape. And then, all of a sudden, I won’t say legitimized, but you see yourself reflected in a way that hasn’t been done.” He enthuses, “A hundred years from now, someone is going to be like, ‘I remember dude.’”
When you put a painting on the wall, do you think it can change the world? It is a question that lingers among social practice art like Kaphar’s. “The Jerome Project” is a kind of social sculpture now; the work inspired a two-day prison reform conference at Yale University Art Gallery and other community initiatives that exist outside of the museum system. It hasn’t inspired massive change in the prison system itself, but it has provided a measure of representation to the lives of prisoners.
“Destiny is all of us,” says Betts. “My nine year old found out I was in prison when he was five; one of his classmates’ parents had Googled me,” he explains. “We all deserve to be able to move on from our mistakes. We also all deserve to have the crime, sentence, and punishment interrogated, and not just taken as just.” He adds, “To me, this exhibition is a counterweight to the images that already exist in the world.”
—Antwaun Sargent
Related Stories