How Tom of Finland’s Celebratory, Sexy Visions of Gay Love Have Empowered Others for over 60 Years 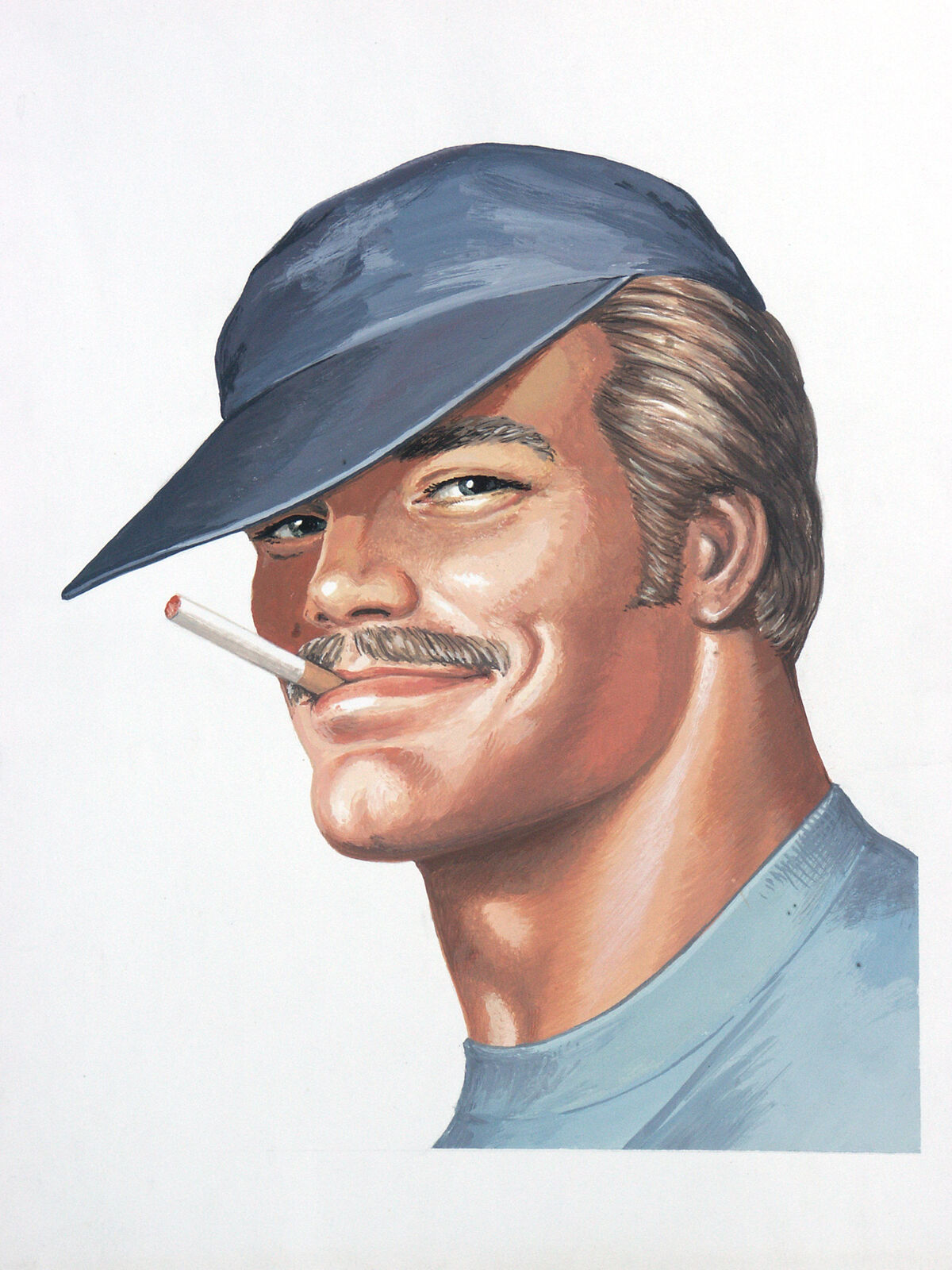 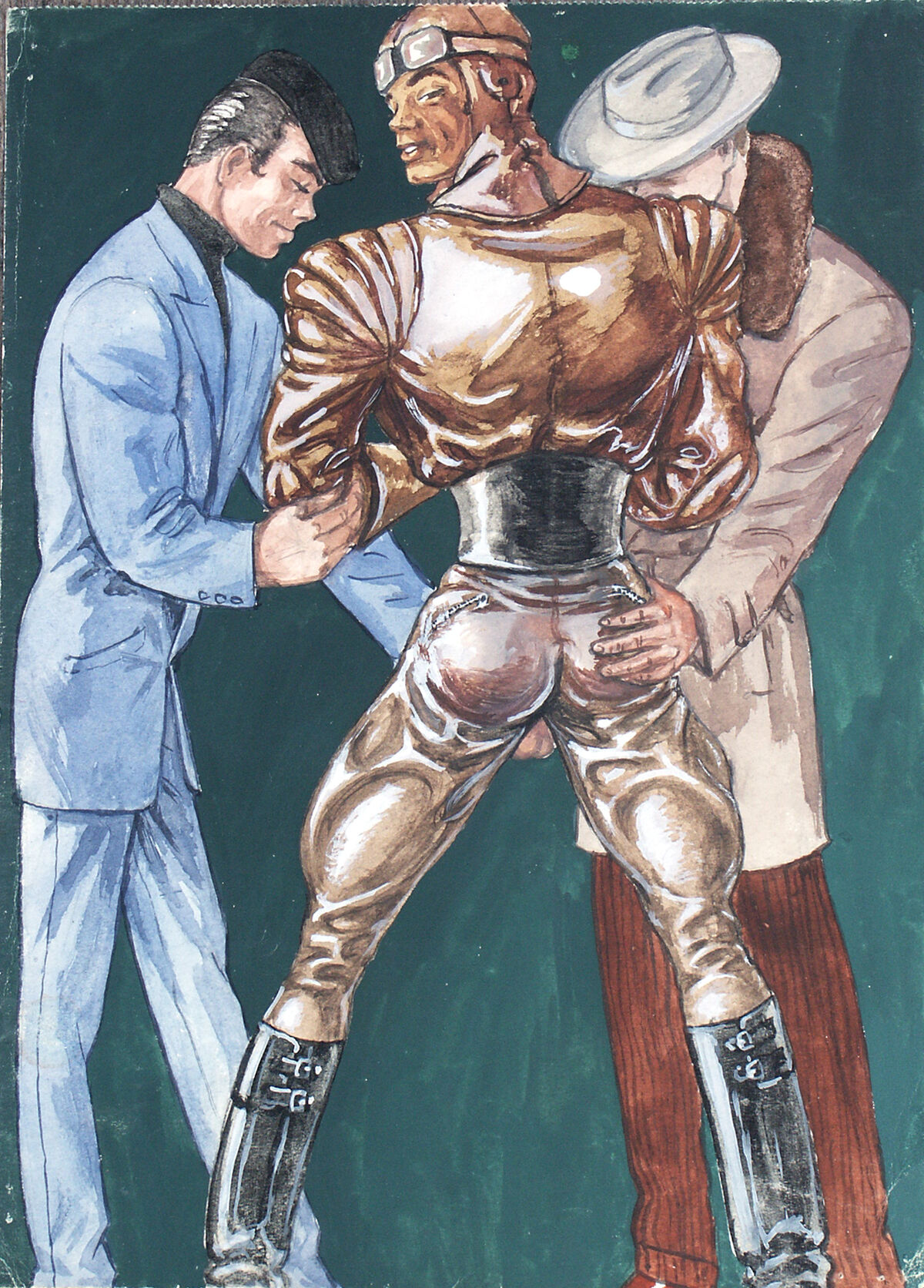 It was 1988, and an image of two muscular, happy men staring at each other lustily flashed onto the wall of a CalArts classroom in Los Angeles. It was a drawing by artist and former adman Touko Laaksonen, better known as
Tom of Finland
. He’d been invited by his friend and fellow artist,
Mike Kelley
, to give a lecture at the university.
Students sat rapt as he explained his seductive drawings of gay men, which had become emblems of both erotic art and equal rights since he began showing them in the 1950s.
“This was very typical of how eroticism was expressed at that time,” Tom of Finland said, in a thick Finnish accent, as he clicked through a series of his early works from the 1950s and ’60s. One showed a man sausaged into a leather jacket, standing next to a sailor; they eyed each other at a bar, pants bulging. In the mid-20th century, sexually explicit imagery was mostly banned, “but some eye contact and hints of what might happen next [were allowed],” the artist explained. “You don’t necessarily need to show a sexual action to express the erotic.”
Tom of Finland did go on to make more explicit work. But whether or not his drawings depicted full-frontal nudity, they all represented a joyous celebration of homosexuality and a fight against discrimination. The gay community recognized this, and his work has became not only a sensation, but a “beacon of hope,” said curator Graeme Flegenheimer. “It says, ‘it’s okay to be whoever you are.’”
Tom of Finland’s daring practice—and its impact on the artists who’ve come after him—is the subject of a show opening at the Museum of Contemporary Art Detroit (MOCAD) next week. “Tom House: The Work and Life of Tom of Finland” will assemble art from every stage of Laaksonen’s output—from childhood sketches to pieces he made in the last years of his life (he died in 1991). These will mingle with objects relocated from his former home in Los Angeles, which now operates as the Tom of Finland Foundation, and work by artists including Kelley,
John Waters
,
Raymond Pettibon
, and others who were influenced by his vision.
All of this will be brought together within a small house-cum-artwork that sits outside of the museum: Kelley’s Mobile Homestead (2012), a recreation of the artist’s childhood home, which now operates as an unconventional art space (it’s built to travel with ease). Inside, MOCAD’s team and the Tom of Finland Foundation recreated the interior of Laaksonen’s own Los Angeles perch, which Kelley frequented as both a friend and a collector. 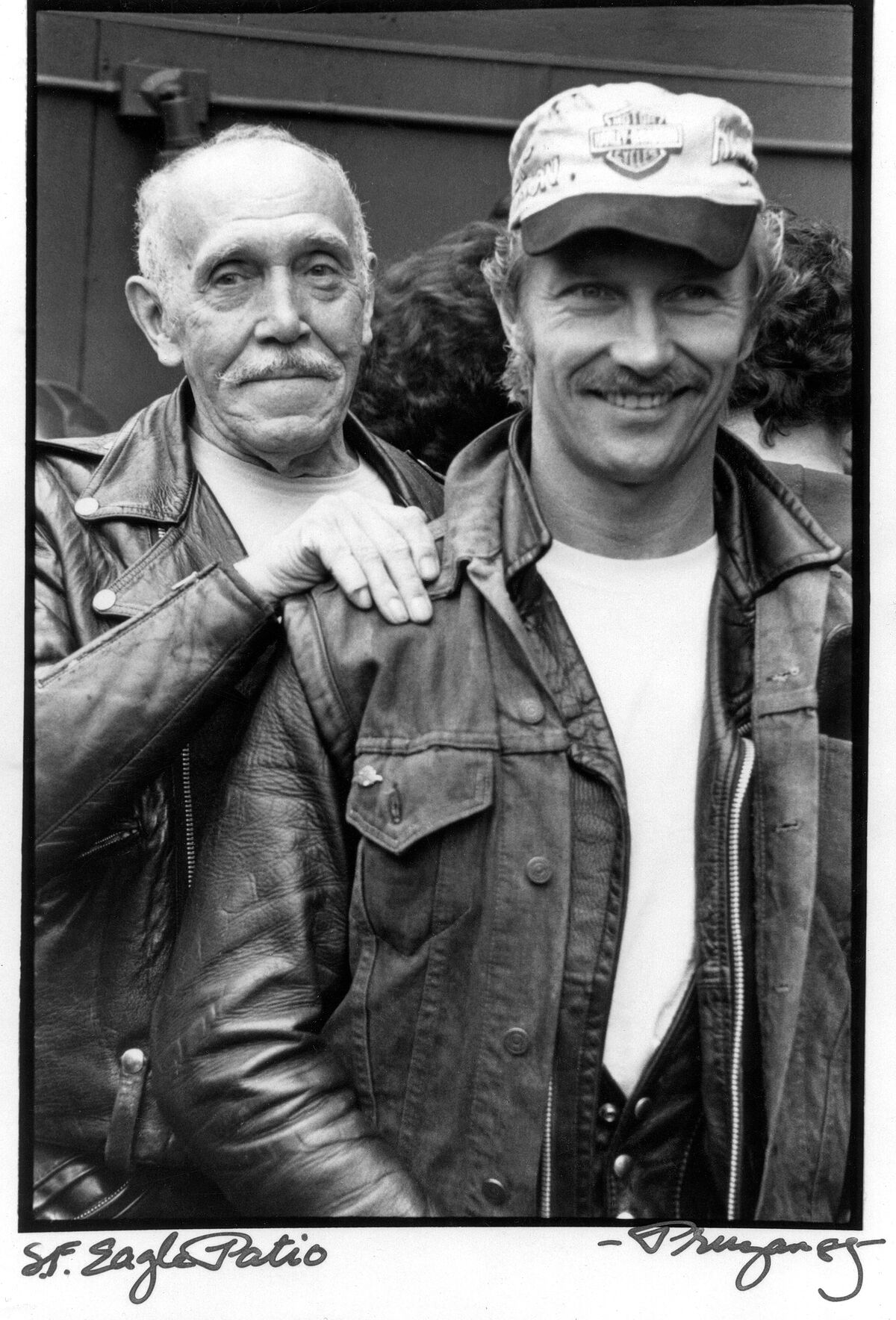 Photo by Matryn Thompson, as featured in Tom House. Courtesy of RIzzoli. “It’s sort of a love letter between the two of them,” said Flegenheimer, who organized the exhibition with the foundation’s Marc Ransdell-Bellenger and S.R. Sharp. “The show is all about the people who supported and admired Tom, and about what the foundation does now—which is promoting, preserving, and protecting homoerotic and queer art.”
“Tom’s work has the power to change people’s lives,” Bellenger elaborated from the foundation’s headquarters in Echo Park, Los Angeles. “And one thing I want to get out of this exhibition is that Tom was a real man—and a lot of [his subjects] were, and are, real men.”
Indeed, tangible, intimate elements from Laaksonen’s world will be front and center in the show. Erotic drawings he made in secret during World War II, when he was fighting for the Finnish army, will hang not far from the pencils he often used to make his work, along with his cigarette case; a condom packet he illustrated; and his leather Harley Davidson cap. Together, these bits of Laaksonen’s life hint at his struggles as an out gay man, as well as his passionate commitment to living as one. (Homosexuality was illegal in Finland until 1971; it remained against the law to “promote” same-sex love until 1999.)
“That’s the luxury we have of being a foundation: uniting the humanity with the artwork,” explained Sharp. “Connecting Tom to the world in which he lived.”
Laaksonen was born in the rural town of Kaarina, Finland, in 1920. At a young age, he was already attracted to the handsome men in his community. “I had a very strong fetish…with leather and boots and all that was combined with masculine professions,” he later remembered. “Nearly everybody in the countryside wears boots, because of the heavy snow.…I saw in all that something different,” he continued, smiling mischievously.
At age 19, Laaksonen was drafted into the Finnish army, and it was there he had his first sexual experiences with men and began drawing the strong, uniformed soldiers with whom he came in contact. After the war, he studied piano and worked part-time as a graphic designer, later securing a gig as senior art director at McCann Erickson, a global advertising agency with an office in Helsinki.
All the while, Laaksonen sketched, gleaning inspiration from the buff men he saw in advertisements, as well as his own memories of the Finnish countryside and the war. “I saw them in my way,” he said of the male imagery that filled magazines and newspapers. “And I wanted to put my erotic fantasies in those pictures.” Tom of Finland’s home in L.A., where the Tom of Finland Foundation is now based. Photo by Martyn Thompson, via TOM HOUSE. Published by Rizzoli.

Advertisement
One piece on view at MOCAD, from 1957, shows two young, chiseled studs jousting with big sticks. They both wear high boots that graze their buttocks. Both their joy—and the innuendo at play—is clear. “He had this wonderful artistic ability, and a great sense of humor,” explained Bellenger. “It’s very subversive, but it also gets you horny!”
In the 1950s, Laaksonen’s personal work remained mostly clandestine. But after he heard about the Los Angeles magazine Physique Pictorial—widely considered America’s first gay publication—all of that changed. He sent drawings to its editor, the photographer Bob Mizer, and they were published on the cover soon after. Mizer, who didn’t think Laaksonen’s full name was straightforward enough for his American audience, suggested the pseudonym Tom of Finland. It stuck, and by 1957, Tom of Finland’s career as an erotic artist had effectively begun.
“Tom House” includes some of Laaksonen’s first work for Physique Pictorial, along with the comics, drawings, and collages he made from the ’50s until the end of his life. As he began to spend more time outside of Finland—in liberal hubs like Berlin, New York, San Francisco, and Los Angeles—the artist’s work became more explicit. He became more comfortable as an out gay man; in parallel, his subjects became freer with their sexuality, too.
In one of his famous cartoons, a strapping, smiling, leather-wearing man named Kake enters a “Pleasure Park,” where he’s free to explore his homosexual desires with other equally hunky men. Laaksonen continued to produce positive images of gay culture during the AIDS crisis, and in 1987 made a now-famous drawing encouraging safe sex. In it, an apple-bottomed man in leather chaps gives a thumbs up next to the phrase “Use a Rubber.”
“In his drawings, homosexuality is perfectly normal. In contrast to a common stereotype about gay men, his men are not weak or ashamed,” explained Florian Hetz, a young Berlin-based photographer who was an artist-in-residence at the Tom of Finland Foundation last year. “They enjoy life and sex, and don’t hide in the dark.”
From the 1970s until his death, Laaksonen spent an increasing amount of time in Los Angeles, where his friend and early agent Durk Dehner lived. Dehner’s arts and crafts-like house in Echo Park, surrounded by a lush garden, became Laaksonen’s second home. Its attic became “Tom’s Room,” where he made many of his late drawings and hung his ever-growing collection of leather jackets. 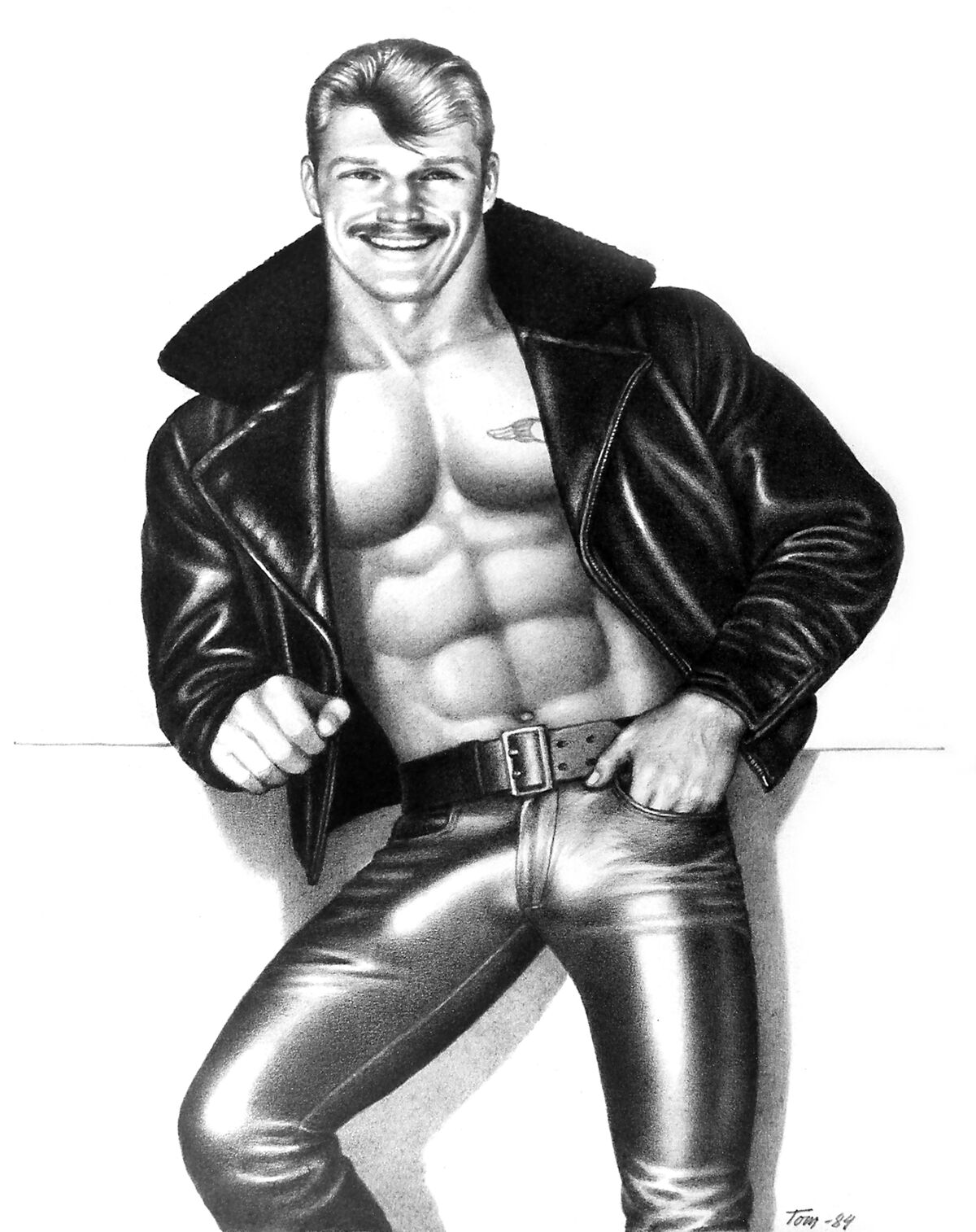 Today, the whole property is now called “Tom House,” and it contains not only Laaksonen’s archive, but also his collection of erotic art (a game of “count the phalluses” would be difficult there). The space also hosts the Tom of Finland Foundation’s activities and employees (Sharp and Bellenger both live there, as do a rotating cast of artists-in-residence). It’s become a haven for the gay community, and gay artists in particular—and they are all welcome to visit. “People always remark on the feeling with which they leave this house,” said Sharp. “Upon crossing the threshold, they’re always impressed with the energy here.”
Sharp and Bellenger both aim to import that feeling in the MOCAD exhibition. “We’re going to crate up some of that energy and send it to Detroit,” Sharp said.
They hope the sense of community that Laaksonen’s drawings have inspired will also come through in work by other artists in the show. Los Angeles-based artist Jess Scott, whose painting is included in “Tom House,” remembers seeing his work for the first time in a lesbian-run bookstore in her small, liberal hometown of Santa Cruz, California. “I think it is probably a testament to the relatively broad adoration for Tom that he was hanging in a lesbian bookstore,” she told Artsy.
“​If you’re a gay artist making anything remotely sexy, Tom is always loitering in the background. You aren’t taking pen to paper and thinking, ‘be as Tom,’” she continued. “You always feel lucky he even happened at all.”
Other artists included in the show agree. “Tom’s work influenced not only the way I look at gay culture, but also how I interpret it,” said performance and multimedia artist Jordan Michael Green, who is currently an artist-in-residence at the Foundation. “Seeing so many different forms of gay masculine expression has expanded my view of our community for the better.”
“Tom lived his life as an out-and-loud artist and gay man and that is inspirational,” said London-based artist
Stuart Sandford
, another resident. “I always wanted my work to be joyful and fun, a little bit cheeky, and most definitely celebratory, and Tom had the same intentions.”
When Laaksonen spoke to CalArts students in 1988, one of them asked if he was “trying to influence gay culture” with his work. The artist’s answer was typically modest. “I didn’t want to, but I’m afraid I might have,” he smiled.
A few beats later, however, he admitted that he’d been lying to himself: “I did want to influence other people, I wanted to change their opinion,” he confessed.
“I wanted to tell [people] that they had a right to enjoy their life, in their way. That was my purpose…to teach [people] to change their habits, to accept themselves, to accept others, and to be accepted.”
Alexxa Gotthardt
Related Stories