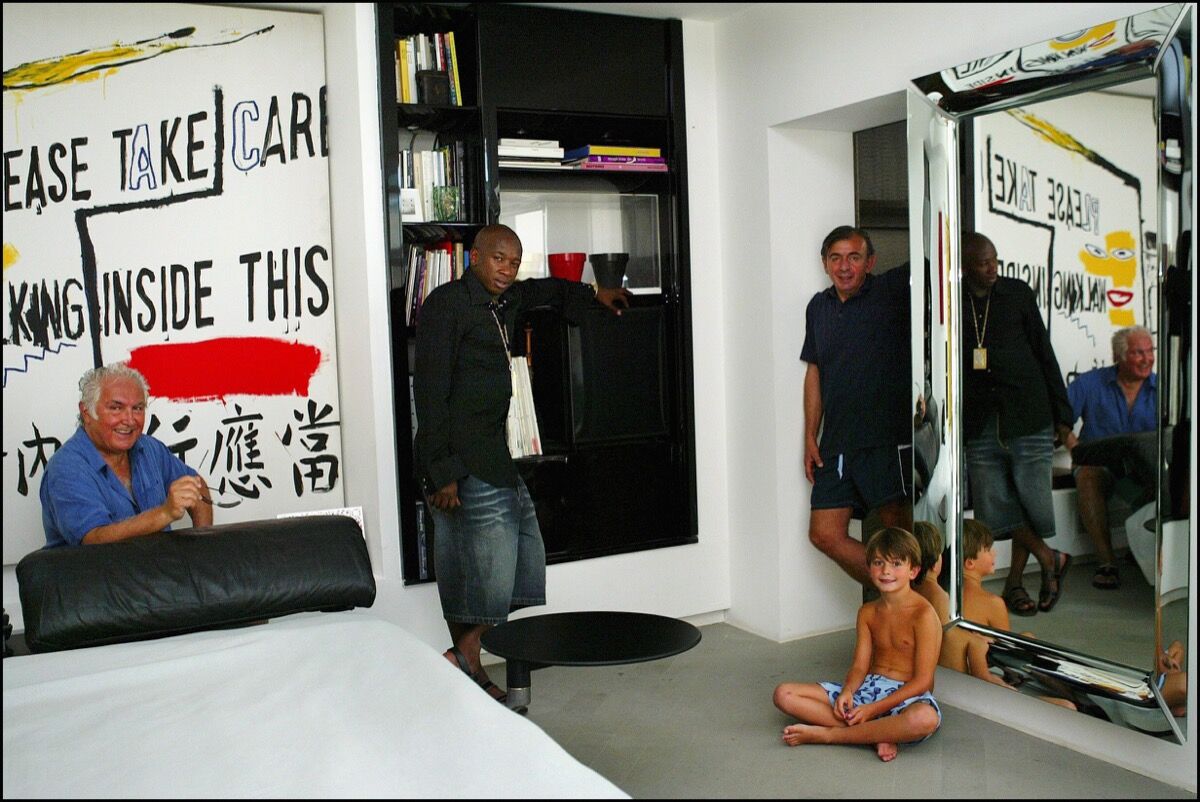 From left to right: Tony Shafrazi in front of art by Andy Warhol and Jean Michel Basquiat, with Mohamed Dia, Enrico Navarra, and Enrico’s son Doriano at Navarra’s villa, 2003. Photo by Eric TRAVERS/Gamma-Rapho via Getty Images.

On February 28, 1974, Tony Shafrazi entered the Museum of Modern Art in New York, went to the third floor, took out a can of red spray paint, and defaced
Pablo Picasso
’s anti-war masterpiece Guernica (1937) after months of planning. Over the famous canvas, Shafrazi wrote the words “KILL ALL LIES,” both as a
Conceptual art
gesture and a protest against the release on bail of the lieutenant convicted for his role in the My Lai massacre during the Vietnam War. Then, Shafrazi waited for the authorities to come and arrest him.
This criminal and controversial act is just one story from the 75-year life of the Zelig figure who is Tony Shafrazi, the dealer who has been present at many of the art market’s most important epochs and moments—from the 1960s, when he was in the heart of
Andy Warhol
’s tinfoil-lined factory; to the 1970s, when he was involved with the revolutionary westward-bound
land art
movement; to the 2010s, when he became an advisor and fixture at high-flying auctions with record-breaking prices. For Shafrazi, not even the crime against Picasso prevented a comeback. Less than a decade after the spray paint incident, he embraced those cans from a commercial vantage point, becoming the first SoHo dealer to embrace the market potential of graffiti artists such as
Jean-Michel Basquiat
,
Keith Haring
, and
Kenny Scharf
.
Shafrazi was born in Abadan, Iran, and moved to London with his father to go to school, eventually attending the Royal College of Art, where he trained to be an artist. Even then, his knack for being in the right place at the right time was astounding. In a conversation in Interview magazine with the actor Owen Wilson—a friend in awe of what he calls “The Shafrazi luck”—Shafrazi recalls a trip to New York where he stayed at a YMCA in Midtown. Looking out of his fourth floor window, he saw into the windows of Andy Warhol’s Factory across the street. 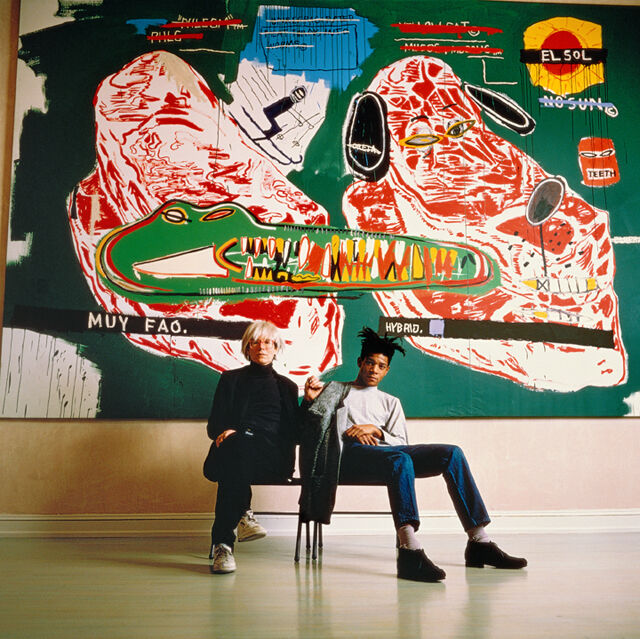 Tseng Kwong Chi
Warhol and Basquiat Sitting, 1987, 1987
Eric Firestone Gallery
“Andy Warhol was like my god already,” Shafrazi told Wilson. “So I went downstairs and across the street.”
“So it’s your first day ever in New York City, and you meet Andy Warhol,” Wilson asked.
“Exactly,” Shafrazi responded.
(I had long thought “across the street” was a bit of an Shafrazian exaggeration, and perhaps the story slightly apocryphal. But the Vanderbilt YMCA was at 244 East 47th Street, and at the time, the Factory was at 231 East 47th Street, directly across the street.)
Shafrazi moved to New York in 1969 after graduating, having abandoned his own artistic practice to become a lecturer, and quickly befriended the art cognoscenti of the time—just as he had become a fixture in the Swingin’ London scene at Robert Fraser’s gallery in London while still a student. In 1973, he took an opportunity to lecture as a part of the Whitney’s Independent Study Program, which was taking place in Albuquerque, New Mexico, that summer.
At the time, land art pioneer
Robert Smithson
was in New Mexico with his wife, artist
Nancy Holt
. In July, they got wind that Shafrazi was meeting with the Amarillo oil heir Stanley Marsh 3, owner of vast tracts of ranch land near town who liked to back ambitious and eccentric art projects. Marsh took Shafrazi and Smithson in his private plane to scout locations, and Smithson saw a lake where he imagined his next earthwork, a giant circular mound in the drained crater: Amarillo Ramp. Marsh agreed to fund it and set up him, Holt, and Shafrazi in a house on his property.
Shafrazi discussed the project with writer Anthony Haden-Guest for his 1996 art world chronicle True Colors: The Real Life of the Art World. One day, Smithson had told Shafrazi he planned to take a ride in the small plane Marsh had rented so he could get aerial views of the lake one last time before installation began. That night Shafrazi had a dream. 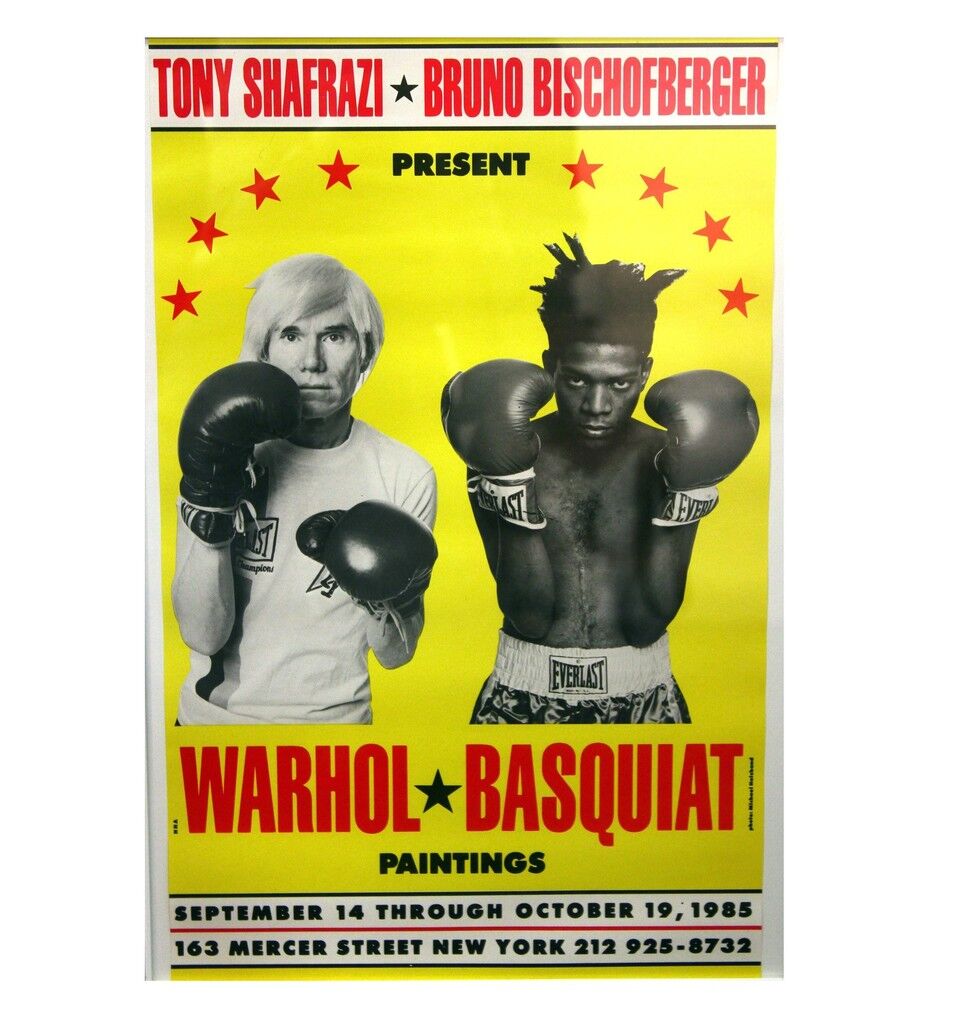 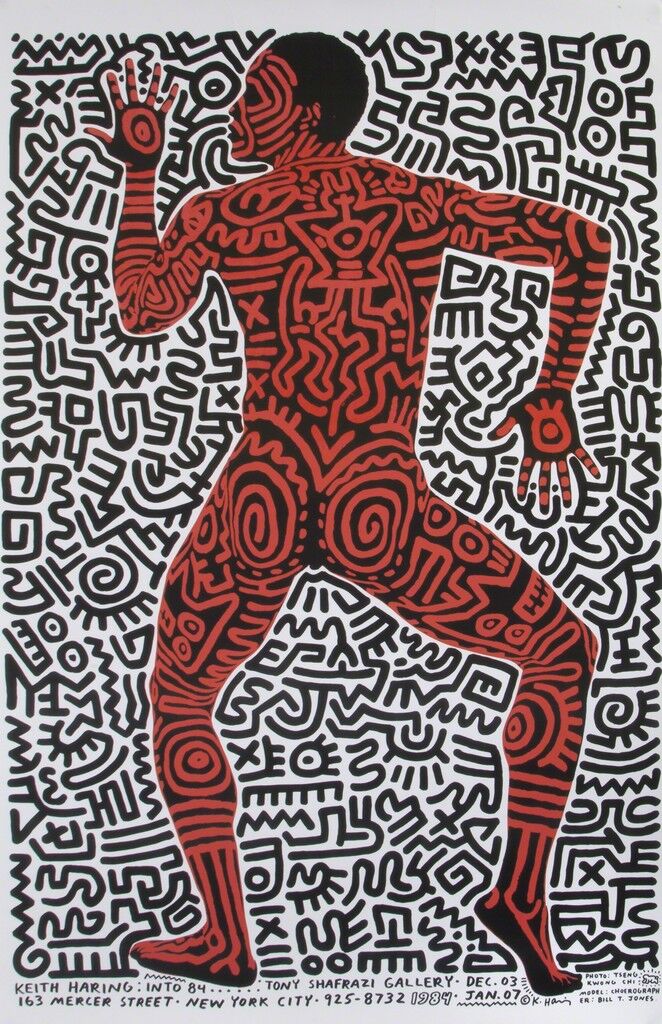 Keith Haring
Keith Haring, Tony Shafrazi Gallery, Exhibition Poster, 1984
Julien's Auctions
Advertisement
“In my dream I realized that I had to get up, wake up, and stop him from going,” Shafrazi recalled.
When he actually woke up, on July 20, 1973, Marsh informed Shafrazi that Smithson, along with the pilot and a ranch hand, had died in a plane crash.
Shafrazi came back to the ranch in August to help Holt finish Amarillo Ramp alongside
Richard Serra
, and then returned to New York, crushed by his friend’s death and reeling alongside many other Americans from the simultaneous catastrophes of Watergate and the Vietnam War. That was when he decided it was time to make his own artistic statement, something akin to the grand ambitions of the land artists or the formal experimentation of the Conceptual artists.
“
Lawrence Weiner
let words climb from the canvas onto the wall. What if a phrase slipped off the canvas onto the floor, the city?” Shafrazi said in an interview with artnet Magazine in 2009. “What if it crossed onto another painting?”
He became fixated on the idea of imposing a phrase on an actual
Jackson Pollock
or
Jasper Johns
, even if, as he told Haden-Guest, “the idea to write on these paintings was tremendously terrifying.” He settled upon Guernica, which Picasso created for the World’s Fair in Paris in 1937 as a searing indictment of a Nazi-led bombing of a Basque Country village during the Spanish Civil War. Picasso loaned it to MoMA in 1950 with the stipulation that it would be sent to Spain at some point in the future (he wanted Guernica housed outside of Spain until the country was rid of the Franco regime.)
On the morning of February 28th, Shafrazi dressed in black jeans, a black turtleneck, and a leather jacket; grabbed his passport and travelers’ checks; and went to MoMA’s third floor. He would mark the mural with a line adapted from James Joyce’s Finnegans Wake. First, he spray-painted “LIES ALL” on the world-famous canvas. But with those words, he had reached the end of the mural, so he wrote “KILL” in front. There were about 40 people nearby, all of them too stunned to react. When security guards approached Shafrazi, he handed them the paint can and was led to the bathroom to be interrogated. The police arrived and escorted him to the the West 54th Street precinct, where he was asked why he would deface such a masterpiece. 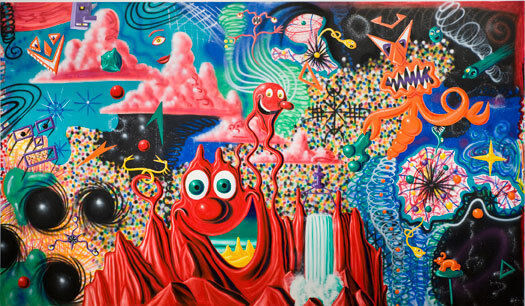 Kenny Scharf
When the Worlds Collide, 1984
Whitney Museum of American Art
“I’m an artist and I wanted to tell the truth,” Shafrazi said, according to a report in the New York Times.
Shafrazi told Haden-Guest that he had proactively tipped off the Associated Press beforehand, so by the next day, it was on the front page of the Daily News, an image of the spray-painted Guernica splashed on newsstands across the city. But the museum’s chief conservator was able to get the red off within an hour, and because of the lack of any permanent damage to the artwork, Shafrazi’s lawyer was able to get him off on five years probation. When the judge asked Shafrazi if he would do it again, he said it would be crazy to repeat an act like that. The judge wanted to know: Why? “Because it had been done,” Shafrazi said.
Soon after, he heard that the leader of his native country, the Shah of Iran, wanted to build up his contemporary art collection, with the intention of establishing a contemporary art museum. Shafrazi jumped at the opportunity.
“I knew that if that were to happen, I would be the best person for it, in terms of someone radically right on the ball, knowing what was going on, the American and European scene,” he told T Magazine in 2007.
Although he wasn’t paid a salary, Shafrazi scored the Shah some mondo deals. He sold what he called an “incredible” Jasper Johns for, he believes, $130,000, or $589,222 in today’s dollars. (Four years later, the Whitney had to spend $1 million to acquire Johns’s 1958 painting Three Flags). The Tehran Museum of Contemporary Art opened in 1977, and Shafrazi opened a private gallery in the city the next year. Unfortunately, the “Shafrazi Luck” went AWOL: The Iranian Revolution began that same year, and martial law was declared. In late 1978, on the gallery’s first opening night, tanks rolled down the street. 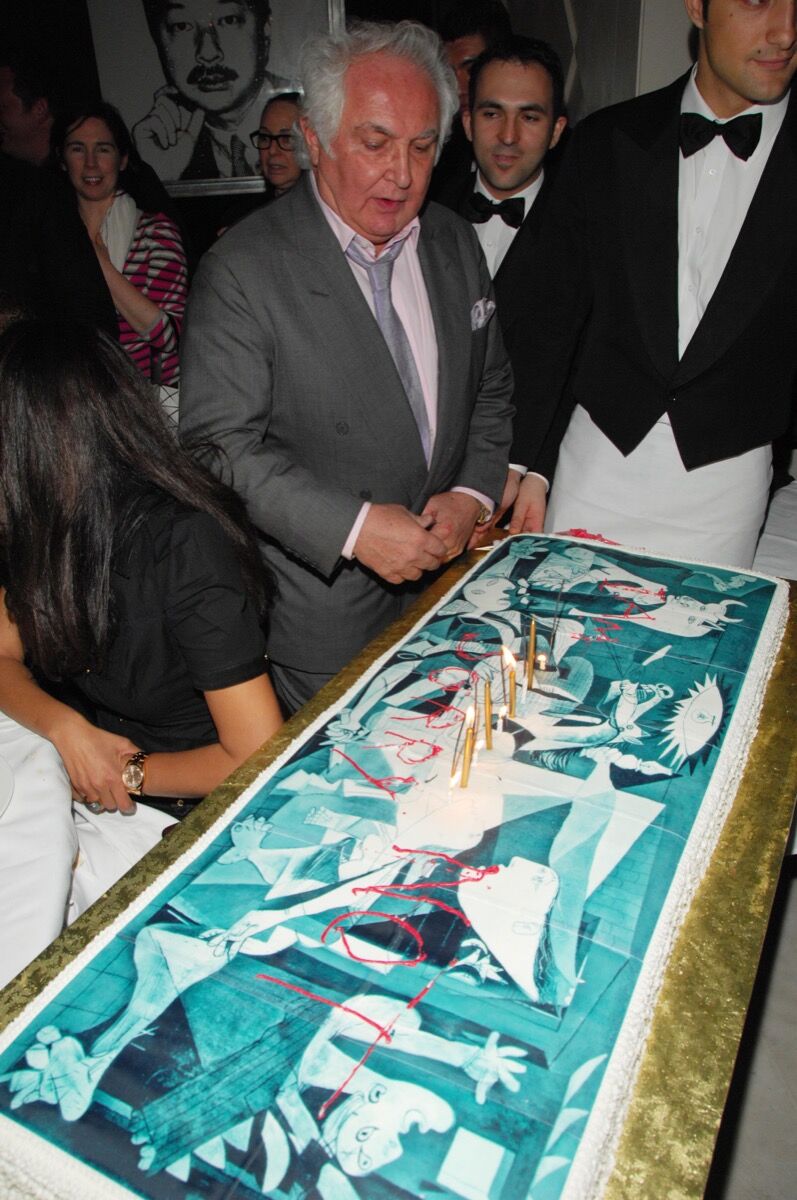 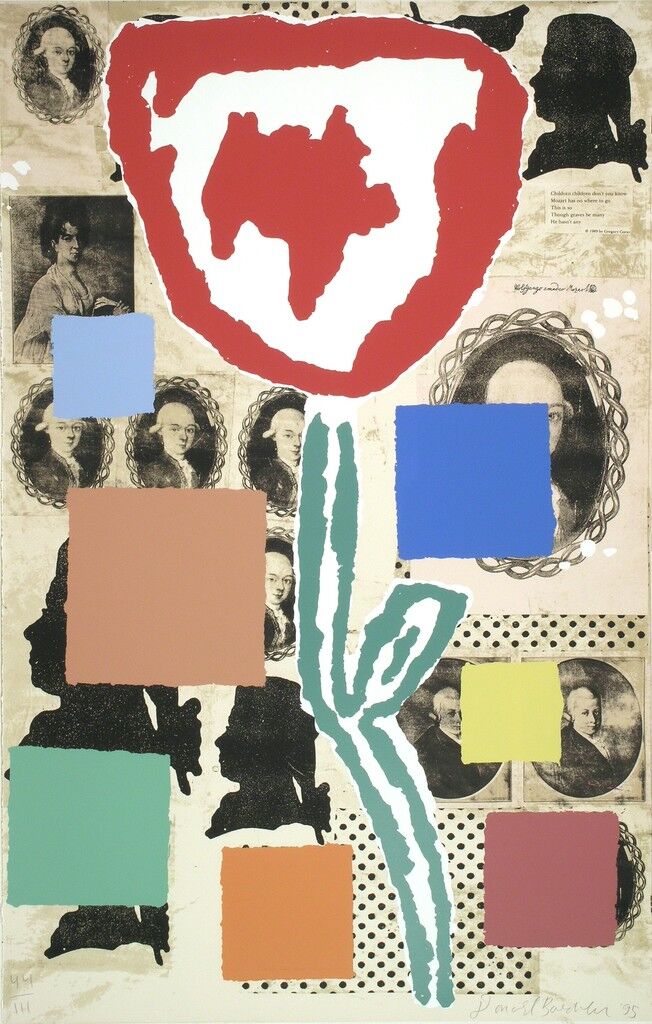 Donald Baechler
Untitled, 1995
Zane Bennett Contemporary Art
Shafrazi was able to get his father and stepmother out of the country shortly after the Shah was exiled, and he ended up back in New York, where he gravitated towards the artists who tagged the streets of the East Village with graffiti. He thought he could show them in the standard white cube of the art world.
“I felt like it was important to acknowledge this new variety of voices, and that’s when the idea of opening a gallery started to evolve,” Shafrazi told Wilson. “I didn’t start the gallery with the idea of being a dealer to make money.”
He opened a space at 163 Mercer Street in SoHo in 1981, and by 1982, he was giving shows to
Futura
, Keith Haring, and Kenny Scharf. In 1985, Tony Shafrazi Gallery hosted the first fruits of the collaboration between Warhol and Basquiat.
All the while, the same artists were still tagging the East Village. In 1984, People profiled Shafrazi, writing: “While members of the limousine set buy Haring paintings from Shafrazi for as much as $20,000 apiece, Haring continues to do graffiti in the subways for the fun of it.”
It was an unlikely second (third? fourth?) act for the criminal who disgraced Picasso just months after the artist’s death, something not lost on the art world at the time.
“The reemergence of Tony Shafrazi, the Sprayer of Guernica, as the Graffiti dealer of choice was further proof that that reality can be more high-colored than any novelist,” wrote Haden-Guest in True Colors.
Shafrazi would go on to open a gallery in Chelsea, winning the lucrative U.S. representation of the
Francis Bacon
estate in 1998. In 2008, his reputation for Guernica and his successes as a dealer collided head-on. That summer, Shafrazi gave his gallery over to artist
Urs Fischer
and dealer Gavin Brown, who together conceived of a group show called “Who’s Afraid of Jasper Johns?” which had a fairly novel conceit. The walls of the gallery were plastered with wallpaper that featured exactly-to-scale images of the last show at the gallery, which was a group show of the artists Shafrazi was famous for making famous: Kenny Scharf, Jean-Michel Basquiat, Donald Baechler, Keith Haring. And on top of the flat images of the previous show, Fischer and Brown installed actual artworks, this time by
Richard Prince
,
Malcolm Morley
, and
Francis Picabia
.
While the show referenced Shafrazi’s past triumphs as a dealer, it also referenced the most notorious line on his résumé. There were photos of Shafrazi being led out of MoMA in handcuffs; during the afterparty, two strippers dressed as cops wheeled out a cake that had on its front a reproduction of Guernica. Brown handed Shafrazi a tube of red icing and implored him to write something, to deface the painting again. “I’M SORRY,” he wrote, until he got to the end of the cake. Then, he added: “NOT.”
Nate Freeman
Related Stories