Last month, 136 years and seven months after its first stone was laid, the Sagrada Família basilica finally got its construction permits in order. It was just the latest hurdle for Catalan architect
Antoni Gaudí
’s spectacular Gesamtkunstwerk to overcome, to the tune of €36 million ($40.7 million) in payments to be made to the city of Barcelona over the next decade.
By the time the city has been fully paid back, the structure of the Sagrada Família will finally be complete—assuming, of course, that construction stays on track. The structure of the eye-popping temple is currently projected to be completed by 2026, in time to mark the centennial of Gaudí’s death, with detailing and interior work expected to take another four to six years. As of 2015, when that schedule was announced, and principal construction on the remaining six towers began, chief architect Jordi Faulí i Oller said the basilica was 70 percent complete.
This year, the Sagrada Família’s dramatic Passion façade was completed (it only took 64 years), and its tallest spire, the Tower of Jesus Christ—which will make it the tallest church in the world—began to rise. In other words, Gaudí’s magnum opus is finally beginning to resemble the scale models that have long teased the 10,000-plus daily visitors to the site. As construction on the Sagrada Família enters its home stretch, it finally seems safe to look back at some of the gravest challenges this temple (technically a “minor basilica,” per a 2010 dedication by Pope Benedict XVI) has faced since that first stone was laid on March 19, 1882.

Gaudí gets called up 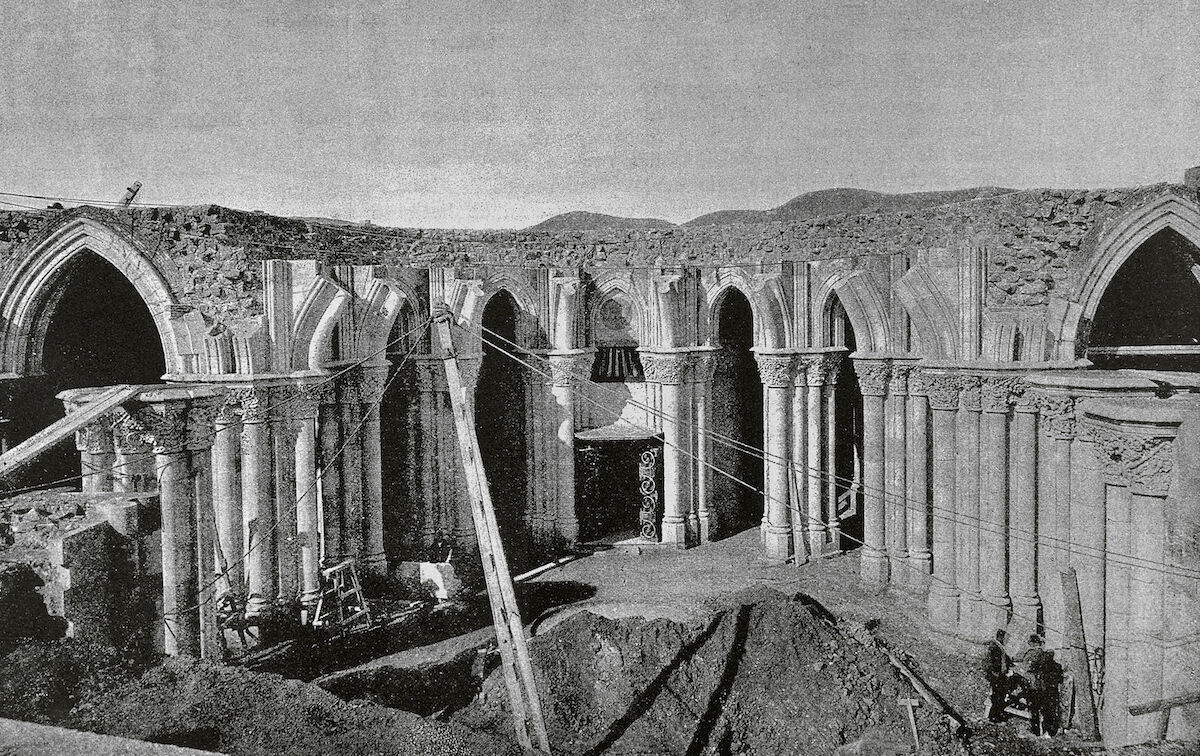 Gaudí was not the Sagrada Família’s original architect. When plans for the basilica were first conceived, Gaudí was in his early twenties and just starting out as an architect, without a finished building to his name.
The campaign for the temple was started in 1874 by Josep Maria Bocabella i Verdaguer, a devout Catholic and seller of religious books, who wanted a temple devoted to the Holy Family in Barcelona. In 1877, a religious organization that Bocabella founded hired Francisco de Paula del Villar y Lozano, the official architect of the Roman Catholic Archdiocese of Barcelona, to start drawing up plans. Del Villar proposed a neo-
Gothic
building, in keeping with the dominant tastes of the time, and in 1881, Bocabella’s association secured a parcel of land that, at the time, sat just outside of the official city limits of Barcelona. The following year, on Saint Joseph’s feast day, the first stone of del Villar’s Sagrada Família was laid.
It didn’t take long for Bocabella to fire del Villar. (They disagreed on details such as the width of the columns in the temple’s crypt.) Gaudí, now 31 years old and a rising figure in Catalonia’s architectural community, could have come to his attention through any number of mutual acquaintances. But popular myth has it that in a dream, Bocabella was rescued by a knight with red hair and facial features perfectly matching Gaudí’s. However, it came to be that when he was offered the job, in November 1883, Gaudí accepted.

Gaudí gets called all the way up 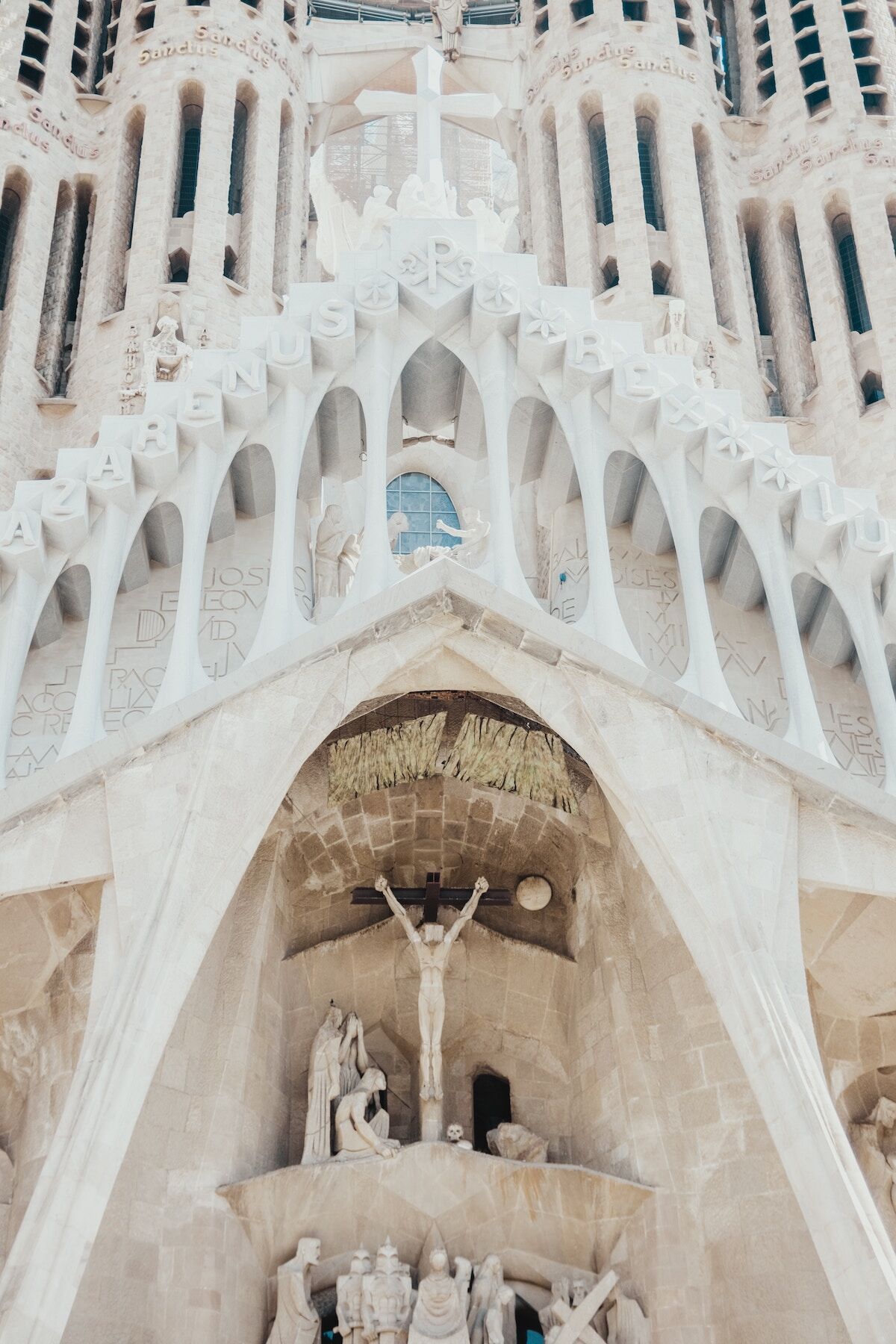 Advertisement
By the first decade of the 20th century, Gaudí had become one of Spain’s most respected—and sought-after—architects. While the Sagrada Família slowly began to rise, he was also working on major public and private commissions. But in the late summer of 1909, at age 57, he turned his full attention to the basilica.
That summer, Barcelona descended into chaos as anarchists and striking workers clashed with military and police forces across makeshift barricades erected in the streets. Amid the violence, which came to be known as the Semana Trágica, more than 50 religious buildings were torched, and three priests were killed. The Sagrada Família, however, was spared; in the midst of the riots, a strike committee even held a meeting there, as art historian Gijs van Hensbergen recounts in his book The Sagrada Família: The Astonishing Story of Gaudí’s Unfinished Masterpiece (2017).
Over the next 15 years, Gaudí became increasingly ascetic and monk-like in his singular devotion to the Sagrada Família. In 1925, the first of its spectacular bell towers was completed—it would be the only one finished in Gaudí’s lifetime. On June 7th of the following year, on his way from the construction site to confession at a nearby church, Gaudí was struck by a tram. He died three days later, at 73 years old. On June 12, 1926, he was buried in the chapel of Our Lady of Mount Carmel in the Sagrada Família crypt.
After Gaudí’s death, Domènec Sugrañes—one of his closest assistants—took the helm. Over the next decade, Sugrañes oversaw the completion of the remaining three bell towers over the dazzling Nativity façade and its Faith portico. Ten years after the loss of the Sagrada Família’s visionary architect, the project would face a much bigger challenge.

Anarchists in the crypt 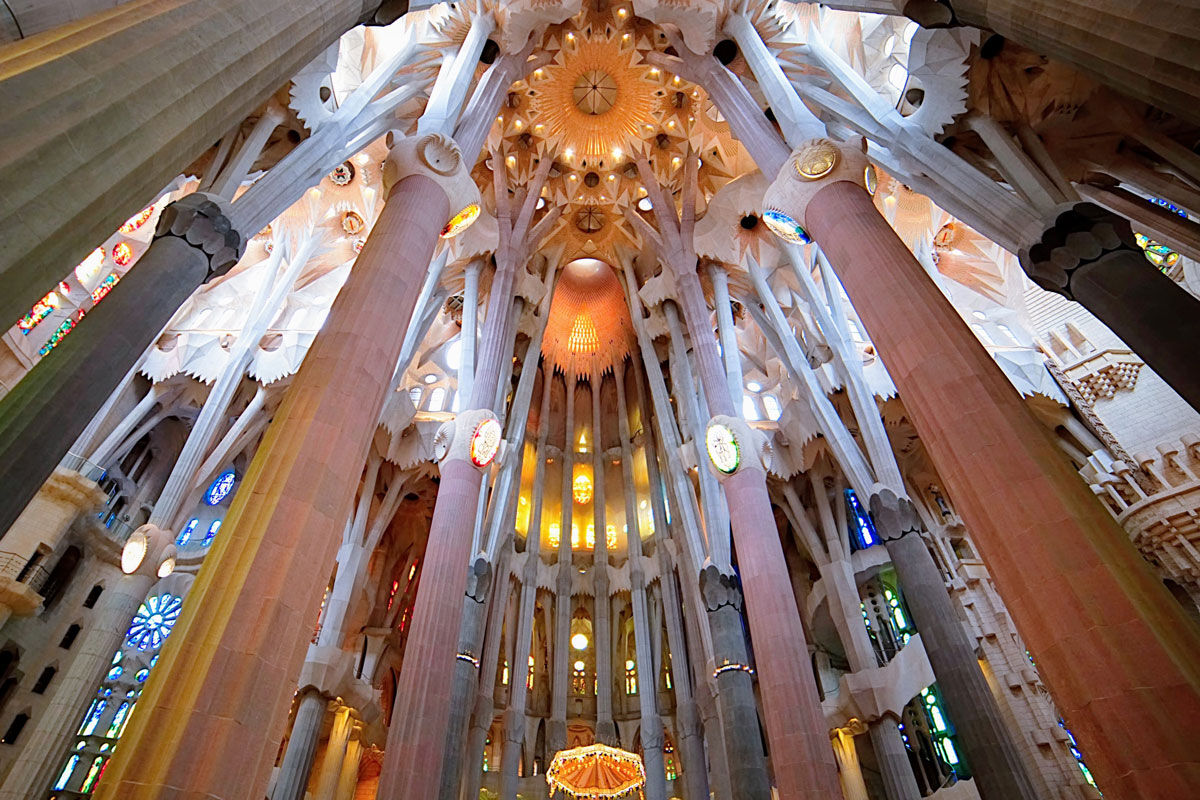 In July 1936, a nationalist military coup was launched from Spanish Morocco, setting off the Spanish Civil War. In Barcelona, anarchist labor unions quickly seized control of the city. Churches and other religious buildings were among the most popular targets in the celebratory violence that followed, and this time, the Sagrada Família did not escape unscathed.
On July 20th, members of the Federación Anarquista Ibérica (FAI) torched the temple’s provisional school, laid waste to Gaudí’s former studio—destroying countless drawings, photographs, plans, and other papers—smashed the construction site’s model and sculpture studios, and set fire to the crypt. The vandals also smashed the lid of Gaudí’s tomb. The FAI rebels returned later that day with dynamite, intending to obliterate the Nativity façade. For whatever reason, they did not go through with their plan, and the Sagrada Família was left severely damaged, but standing. In the final pages of his Homage to Catalonia (1938), novelist George Orwell—evidently not a Gaudí fan—alluded to the failed dynamiting with some regret.
“I went to have a look at the cathedral—a modern cathedral and one of the most hideous buildings in the world,” he wrote. “Unlike most of the churches in Barcelona it was not damaged during the revolution—it was spared because of its ‘artistic value,’ people said. I think the Anarchists showed bad taste in not blowing it up when they had the chance.”
While the damage to the building may not have been irreparable, the Sagrada Família’s community was terrorized and decimated. All in all, amid the anti-Catholic violence of the Spanish Civil War, 12 people involved in the operation and construction of Gaudí’s building were killed, according to van Hensbergen. And a little over two years after the outbreak of the Civil War, Sugrañes died. He was just 59, and many blamed his death on the despair brought on by the bleak outlook for the Sagrada Família.
In March 1939, less than two months after Franco’s victorious troops had marched into Barcelona, Francesc de Paula Quintana was named the Sagrada Família’s new chief architect. An assistant to both Gaudí and Sugrañes, he’d spend most of the following decade repairing the extensive damage wrought during the Civil War and plotting a course forward. 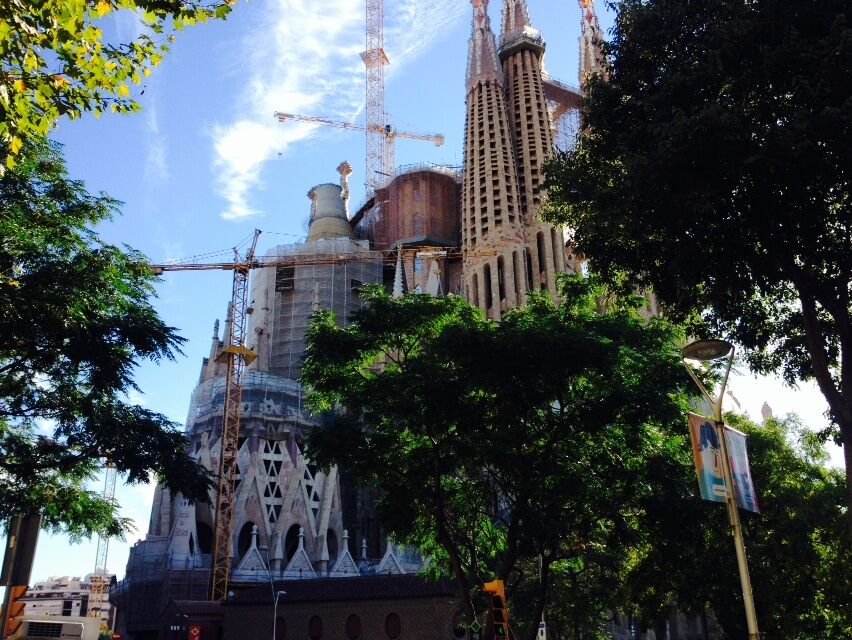 In the 1950s and ’60s, just as the global architecture community began to recognize the genius of Gaudí’s work—which had begun to fall out of favor in Catalonia in the 1920s—Spain became an increasingly popular tourist destination. In 1955, a year after the foundation work for the church’s Passion façade began, the basilica’s first public fundraising drive was terrifically successful. More than seven decades after its first stone was laid, Gaudí’s masterwork was moving forward again.
The building’s progress and increasingly global profile also made it a target for critics. On January 9, 1965, the Catalan paper La Vanguardia published a letter signed by an international coterie of artists, architects, and intellectuals—including
Le Corbusier
,
Alvar Aalto
,
Joan Miró
, and
Antoni Tàpies
—calling for work on the building to be put on hold. The letter deemed continued work on Gaudí’s project a bastardization of the architect’s original vision, bemoaning the idea that one would continue an artist’s unfinished work after his death. Nevertheless, work continued, and towers and visitor numbers continued to rise.
Over the ensuing decades, steadily rising visitor numbers provided plentiful funding for construction. In 2005, the Sagrada Família was designated a World Heritage Site by UNESCO, but a couple of years later, a new project threatened to bring everything crashing down.
In 2007, the Spanish government announced plans to bore a 39-foot-wide high-speed train tunnel under Barcelona, passing near the foundations of the Sagrada Família. Jordi Bonet i Armengol, the director of construction on the temple at the time, warned that creating the tunnel “could prove fatal” to Gaudí’s building, causing “irreversible damage,” and that vibrations caused by the regular passage of high-speed trains beneath the building could cause fissures and loosen tiles from its walls.
In response, special provisions were made to reduce the tunnel’s possible impact on the Sagrada Família. Construction on the tunnel began in 2010, and trains began rolling through it three years later—to date, no damage has been reported.
A few weeks after the tunnel-boring machine passed under the Sagrada Família’s foundations, Pope Benedict XVI consecrated the temple. On November 7, 2010, the pope told those assembled for the service: “I have been moved above all by Gaudí’s confidence when, in the face of many difficulties, filled with trust in providence, he would exclaim, ‘Saint Joseph will finish this church.’”
While, at times, it has seemed that it would take a miracle to finish the Sagrada Família, it may indeed come down to the willpower of one very determined saint. And, as luck would have it, Gaudí’s candidacy for sainthood is gathering momentum.
Benjamin Sutton is Artsy’s Lead Editor, Art Market and News.
Related Stories