These Trans and Queer Artists Are Challenging Popular Notions of Strength After President Donald Trump announced his sweeping ban on transgender people from the armed services in July, he said that he was doing the United States a “great favor.” Contrary to any existing evidence, he announced that transgender topics had been “a very confusing issue for the military,” which purportedly burdened the nation’s defense with “tremendous medical costs and disruption.”
Actual accounts and data regarding transgender military personnel contradict the president’s statement. “We are liberty’s light,” said transgender Navy SEAL hero Kristin Beck to Business Insider shortly after Trump’s announcement. “If you can’t defend that for everyone that’s an American citizen, that’s not right.…You’re talking about .000001% of the military budget.” With 20 years of service—including 13 deployments to nations like Bosnia, Iraq, and Afghanistan—Beck herself is living proof of transgender strength.
Trump’s commentary forwarded a well-worn false narrative about queerness built around a stereotype of softness: the femme afraid of war, the homosexual who’ll be a liability on the battlefield. What Trump neglects is the harsh reality of queer life, the struggles for social acceptance, and the increased threat of violence that unfortunately accompanies too many transgender and genderqueer lives. Such violence forms a hurt locker, testing the strength and resolve of LGBTQ individuals far past a person’s normal breaking point. Bias like Trump’s infects social conscience, spreading throughout the world. Shortly after his election, hate crimes in some cities across the United States rose 20 percent. In the United Kingdom, attacks against LGBT people have surged almost 80 percent over the last four years, according to the charity Stonewall and YouGov polling.
Perhaps in response to the rising tides of hatred and abuse, queer artists are increasingly wrestling with themes of strength and violence. Specifically, transgender and genderqueer artists are reversing those so-called “soft” stereotypes of queerness. They’re finding strength in their identities, and marshalling visions of power that simultaneously manifest and subvert traditional ideas of macho masculinity. In the process, these artists are posing vital questions: What makes someone strong, and how do we quantify strength? And is there room for queerness within traditional notions of physical prowess? 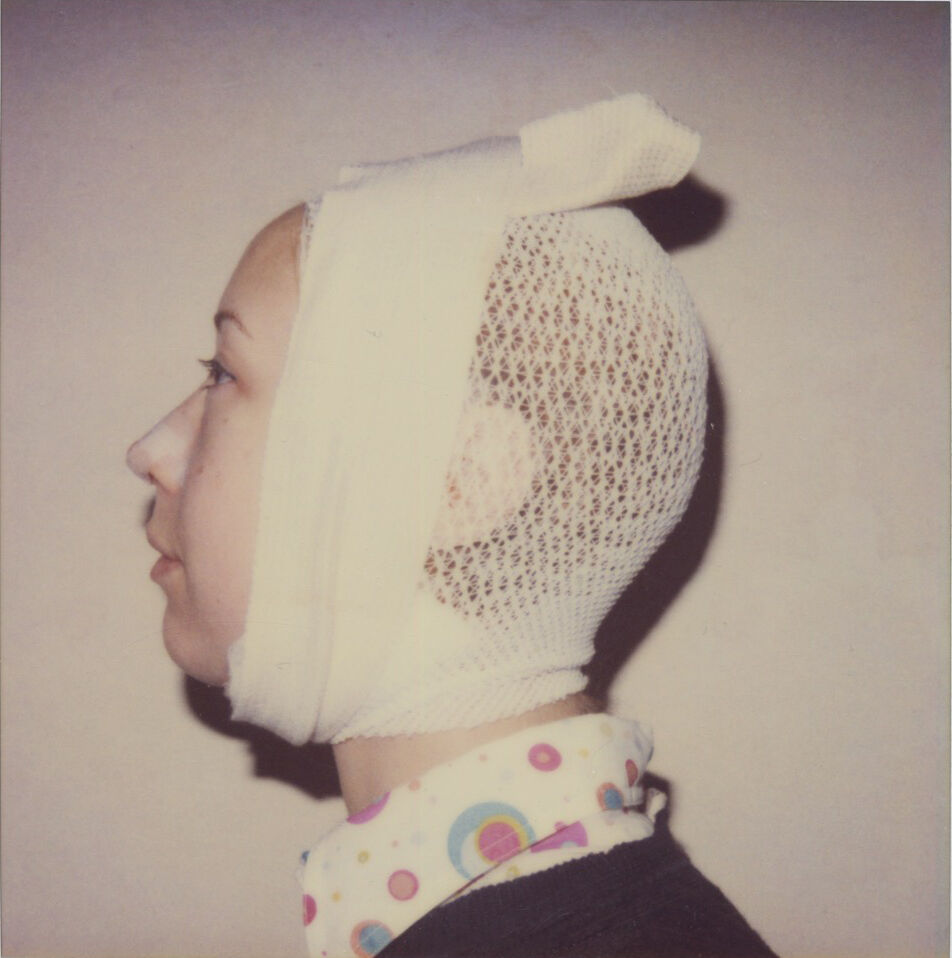 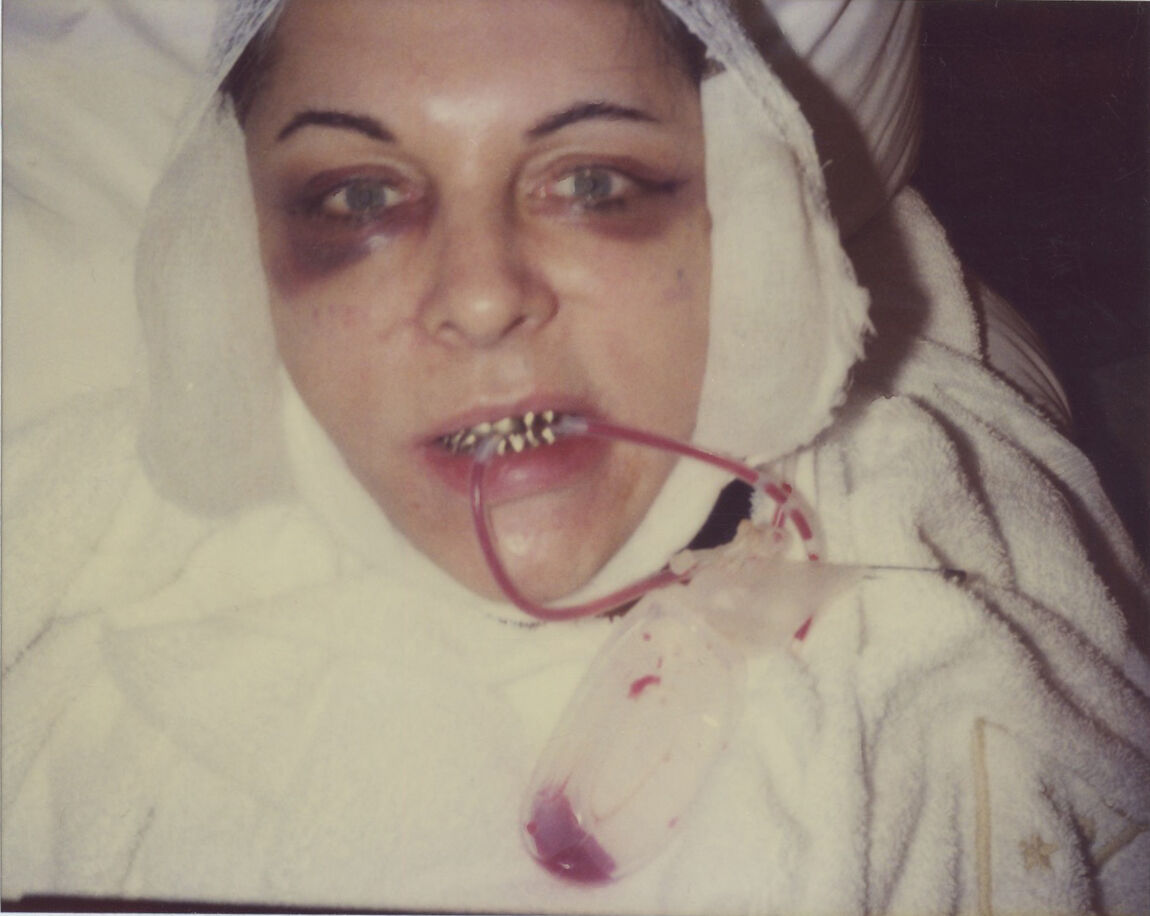 Breyer P-Orridge, Pharoah, 2005. Courtesy of the artist and INVISIBLE EXPORTS.

Of course, this is not an entirely new development. The work of
Genesis P-Orridge
serves as one origin story for the above power principle. In the early nineties, P-Orridge and his partner Lady Jaye founded what they dubbed the Pandrogeny Project; the pair were in love, and resolved to combine both of their bodies and spirits into one.
The project wasn’t metaphorical: It applied William S. Burroughs’s cut-up technique to the human body. Both P-Orridge and Lady Jaye underwent a series of body modifications to better resemble each other, a surgical feat that the former documented in a vast series of post-op Polaroids with titles like Post-op Pinhead (2004) and Pharaoh (2005), photographs that revealed the physically brutal effects of their project. Building one’s perfect image is, in this sense, an endurance performance. But the pain it involves is also power. With bruised eyes, covered in blood and bandages, P-Orridge looks resolute, happy even.
Accordingly, P-Orridge draws h/er strength from extreme body alterations. S/he dares to acknowledge the violence implicit in surgical transitioning, aiming to reterritorialize it all as kink. Flowering Pain Give Space (1998) is the strongest example of P-Orridge’s conflation of power and pain. In the photo-collage, P-Orridge sits on a purple throne. S/he is resplendent in BDSM paraphernalia: leather straps, high heels, nipple clamps, and a long tube snaking from mouth to genitals. We may not be comfortable with P-Orridge’s intense dedication to h/er version of body art, but s/he readily anticipates that. Our discomfort gives h/er power. S/he disorients the viewer to build strength, conjuring a queer occult. 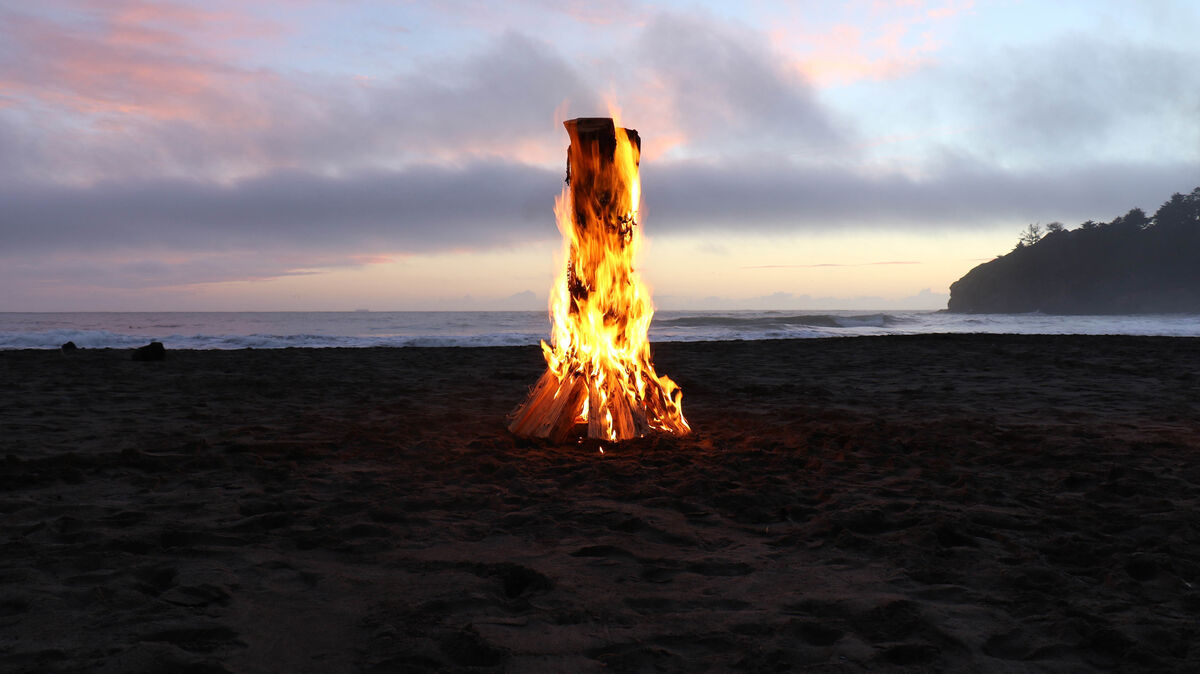 Advertisement
Younger artists, clearly inspired by P-Orridge, have gone on to create monuments and memorials to queer strength—but this new generation also examines its subdued and poetic elements. A 2017 sculpture by Joseph Liatela, for example, celebrates queer resistance while acknowledging the transgender community’s significant losses: The charred remnant of a redwood tree stands tall, but shorn of its branches, its blood-red trunk exposed, snaked with padlocks and chains.
In an accompanying film, we see the tree set ablaze on the beach, a purple sunset lighting the Pacific coastline. As it burns, we hear the  words “I believe in the gay power” repeated. There’s something deeply spiritual, quasi-Catholic, about this scene, with the burning tree as a signifier of transgender martyrdom. Below it, the artist has placed 27 glass vessels filled with water from the Pacific Ocean, each one symbolizing a life lost to transphobic violence in 2016.
Increased visibility of transgender figures has coincided with an uptick in violence against them. We easily miss how dominant systems of power can literally shape our bodies, but this is a simple fact of life for transgender people. Like P-Orridge, Liatela cannot deny the connections between queer life and pain. In his 2017 endurance performance, Bound, we see the artist hoisted onto the gallery wall by way of ropes and a simple pulley system. While chest binding techniques can initially provide a feeling of security,  they’re uncomfortable; at their worst, they can be extremely hazardous, leading to broken ribs and blood clotting. When Liatela finally returns to the ground, he exposes the bloody rope burns on his chest, which align with his breast removal scars.

Other artists approach issues of queer strength with a more restrained, minimalistic touch. The Hong Kong-raised and Brooklyn-based artist
Jes Fan
produces sculptural versions of gym equipment; sculptures like T4T (2016) and Hard Body / Soft System (2017) transform barbells and dumbbells into soft, malleable items. (The former is made of millennial pink silicone while the later consists of soap and plaster.) Here, Fan’s desire is to obfuscate the difference between hard and soft, asking us to quantify and justify our sense of queerness as a limp thing. It’s a conceptual question for the viewer: How soft must a masculine object get to become feminine?
Here, I think Fan realizes that the ideas of softness and strength are not diametrically opposed, but exist in tandem. The artist pushes their thesis with Disposed to Add (2017), which features two dancers incorporating a silicone beige barbell in a pas de deux of flawed masculinity. Fan’s elastic barbell amplifies the pain and subsequent strength needed in being queer. Together, two dancers seek to destroy the barbell by twisting, pulling, breaking, and snapping it into small segments that are flung across the gallery floor. Fleshy and limp, these fragments somewhat resemble forlorn dildos; the idea of soft strength becomes erotic, as the performers slide, writhing, across the floor. 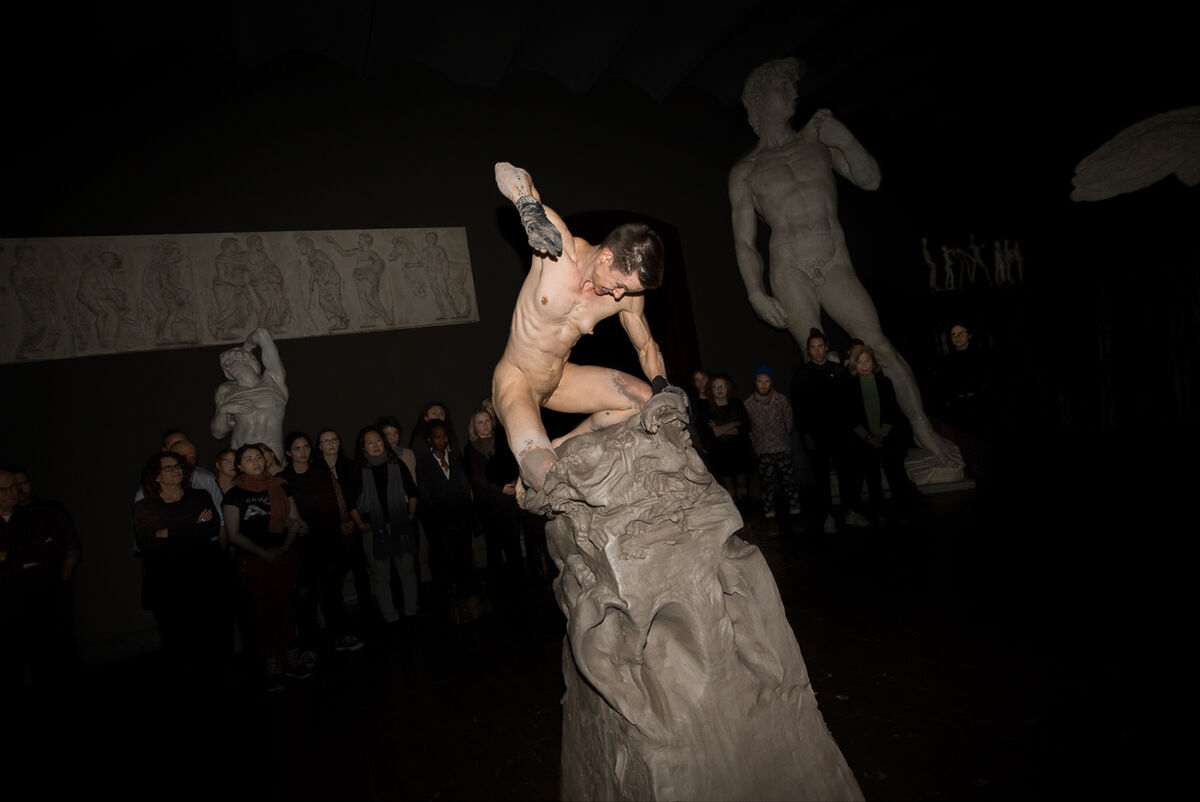 While Fan riffs on the machinery of the gym, Los Angeles-based performance artist
Cassils
has a practice that involves visiting it, often.  A bodybuilder, their practice is one of sculpted muscles and ideal proportions. Cassils is strong, taut. The 2017 Guggenheim Fellow and 2015 Creative Capital Awardee uses their body to conflate and confront archetypes of hypermasculinity and gay body image. But Cassils also uses their body as an instrument of the oppressed. Their performances often involve endurance challenges that allegorize the pulverization of people under large governmental institutions. As a witness to state-sanctioned violence, Cassils wants to shock their audience out of complacency. Their playbook utilizes the unconventional “path of most resistance,” engaging in dangerous acts to convey the strength in suffering.
Inspired by the collection at ONE Archives in Los Angeles, the oldest active LGBTQ archive in the United States, Cassils quite literally boxes with ideas of strength, masculinity, and queerness in  Becoming an Image (2012–present). Wearing nude underwear and bandaged gloves, the artist launches an attack on a 2,000-pound clay block in total darkness. With a flurry of punches and kicks, they transform the clay into a site of violence and anger. The monolithic block becomes putty. As Cassils hammers away, a group of photographers try to capture their performance in pitch darkness, illuminated only be the flash of their own cameras. In 2013, the artist used the mound of clay from Becoming an Image as a mold to create a concrete sculpture, The Resilience of the 20%, which they describe as “a violently elegant funerary sculpture.” (In 2012, murders of trans men and women around the world increased by 20 percent.) 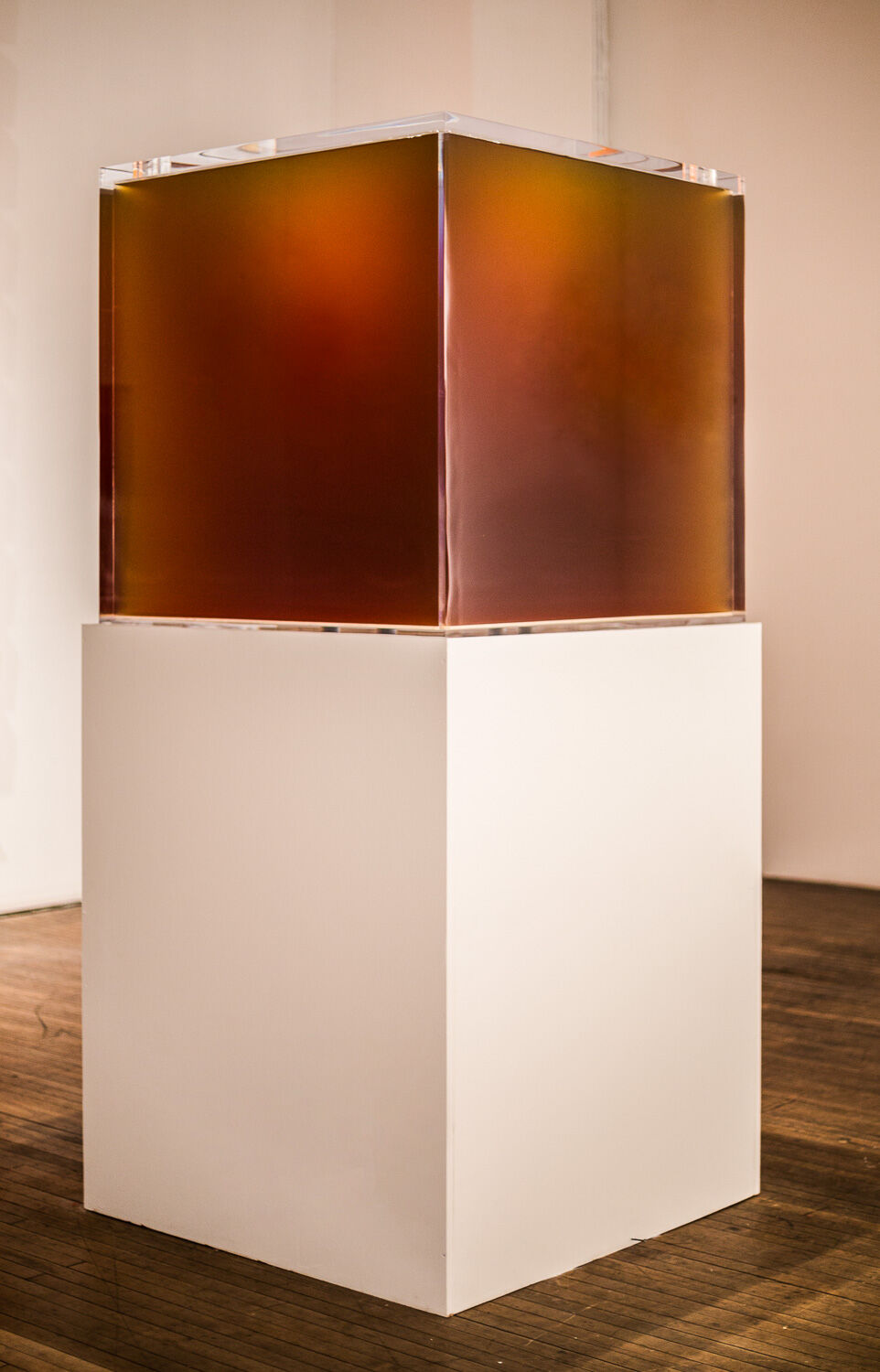 PISSED, a 2017 sculpture by Cassils now on view at Ronald Feldman Fine Arts, also belied the image of transgender people as somehow passive or weak. For 200 days since Trump rescinded the Obama-era executive order allowing transgender students to use the bathroom matching their chosen gender identity, Cassils has collected and stored their own urine. For this work, they stood defiantly on a podium high above the audience, backgrounded by dozens of orange canisters. As a recording of transgender student and activist Gavin Grimm discussing Virginia’s bathroom bill plays, Cassils began urinating into a fresh canister. With a stony stare and solemn focus, Cassils rebuked the Trump administration’s continuing attacks on the transgender community. A large glass cube stood opposite of the artist, holding even more of their urine. For a moment, one could imagine the container breaking, allowed Cassils’s urine—pure bodily resentment—to flood the gallery space.
As political agents and objectors, queer artists continue to demonstrate a steely resolve to overturn Trump’s LGBTQ smear campaign. Genderqueer and transgender people are not weak, as his administration would suppose. (Perhaps they’re even tougher than the average army recruit, given the unique adversities the community has faced.) And despite the White House’s ignorance, such artists are busily elaborating on and redefining what strength is. This combination of physical and mental endurance is a stunning tribute to persistence—whatever the odds.
Zachary Small
Related Stories