01  President Trump’s budget proposal calling for the elimination of the NEA has been met with fierce criticism from the arts community.

(via the Washington Post and the New York Times)
After months of speculation that the National Endowment for the Arts (NEA) would be subject to elimination, President Trump’s budget proposes that that the organization’s $148 million in funding be slashed. Current NEA chairman Jane Chu released a statement expressing disappointment with the proposal, emphasizing the geographical diffusion of projects funded by the NEA. The plan, which appropriates federal funding, still needs to be enacted by Congress through what will be a lengthy and contentious process. During that time, the NEA will continue to operate per usual. While right-wing writers like George Will generally applaud the plan, according to the New York Times, arts advocates are looking to sway conservative representatives in red states into protecting the agency’s budget. Outgoing director of the Met Thomas Campbell called the agency’s potential elimination a “terrible disservice to the American people.” Critic Philip Kennicott wrote in the Washington Post that the cuts amount to “carefully calculated attacks on communities, especially those that promote independent thinking and expression, or didn’t line up behind the Trump movement as it swept to power through the electoral college in November.” A PEN America petition opposing the elimination of the NEA—and fellow agency the National Endowment for the Humanities (NEH)—has been signed by prominent artists like
Jasper Johns
,
Cindy Sherman
,
Barbara Kruger
, and others. Though the NEA has long faced challenges from the right, Trump is the first acting president to propose the elimination of the agency.

02  The damage done to Mosul’s archaeological museum by ISIS is being assessed after Iraqi forces retook the museum last week.

(via AFP)
After government troops recaptured the institution last Tuesday, archaeologists and reporters were allowed to enter the site this week, finding the museum had suffered massive damage. ISIS forces looted antiquities that were small enough to carry, leaving all of the museum’s cabinets empty, and destroyed large-scale sculptures and objects—some of the destruction was captured on video that spread widely in 2015. “Antiquities weighing more than four tonnes were impossible for them to steal, so they were destroyed on the spot,” said Iraqi archaeologist Layla Salih. Once regarded as Iraq’s second-most important museum, its holdings included major Assyrian and prehistoric Hellenic antiquities. Three of the Mosul museum’s most valuable works were destroyed—two “lamassu” sculptures and a large winged lion. The museum itself is in ruin and among the few objects that survived are two coffins of 13th-century Shiite imams.

03  The 78th edition of the Whitney Biennial, curated by Christopher Y. Lew and Mia Locks, opened Friday to rave reviews.

(Artsy)
“Irony, be gone,” said Whitney director Adam Weinberg on March 13th as he inaugurated the 2017 Whitney Biennial—the first to take place in its Meatpacking District location. The phrase was uttered softly and without emphasis, but the words can be seen to summarize the 2017 edition of the biennial, curated by Lew and Locks. The duo’s show is direct and unapologetically concerned with the state of American society and the individual lives of American citizens, without being drawn into sentimentality or ever becoming too noisy or polemical to lose its impact.

(via Hyperallergic)
Italian animal rights group 100% Animalisti docked in Venice at around midnight on March 6th and headed to the Palazzo Grassi. Once there, they dropped off 88 pounds of dung and a banner that read “
DAMIEN HIRST
GO HOME! BECCATI QUESTA OPERA D’ARTE! 100% ANIMALISTI” (which translates to “Here is my piece of artwork”). The group has previously protested the works of
Maurizio Cattelan
and
Hermann Nitsch
. Hirst has long come under fire for the use of animals in his work, from sourcing a tiger shark for his notorious The Physical Impossibility of Death in the Mind of Someone Living (1991) to causing the deaths of some 9,000 butterflies in 2012 for his show at the Tate in London. Palazzo Grassi and fellow Venice museum Punta della Dogana will present Hirst’s first major show in Italy since 2004, which spans both venues and is slated to open April 9. Titled “Treasures from the Wreck of the Unbelievable,” the show will present a new body of work that is reportedly “10 years in the making.” Though little is known of the work—aside from two brief trailers that depict underwater sea life scenes—the New York Times reported that the 250-piece series “resembles jeweled buried treasure covered with coral as if just pulled out of the ocean, like relics from the lost city of Atlantis or Captain Nemo.”

(via Salt Lake Tribune)
The Utah Senate and the Utah House of Representatives have both voted to designate the late American sculptor’s monumental 1970 work, Spiral Jetty, as a “state work of art.”
Smithson
’s sculpture, located in rural Utah, sees 1,500 feet of black basalt rock coiled near the northeastern shore of the Great Salt Lake. The legislature also adopted ancient rock art sites found across Utah as a “state work of art.” As representative Becky Edwards told The Salt Lake Tribune, the bills are “a nod to the prehistoric people who lived in our state and an acknowledgement of the contemporary land art that is so unique in our state.” Representative Christine Watkins called Utah “one of the most important rock art theaters in the Western hemisphere” in reference to what she described as at least 12,500-year-old ice age art. The rock and land art will join other current Utah symbols including the state insect (honeybee), state tree (Quaking Aspen), state animal (elk), and state cooking pot (Dutch oven).

06  Following a series of protests, a contemporary art gallery in London known for hosting far-right speakers has shut down.

(via Shutdown50)
The campaign to close LD50 Gallery—run by Lucia Diego and Alexander Moss—began earlier this month following a Facebook post by Diego in support of President Donald Trump’s Muslim ban. Revelations that the space had previously hosted numerous far-right speakers as part of an alt-right art exhibition also sparked controversy. On Tuesday, the group “Shut Down LD50” announced that the landlord of the Dalston space had asked the tenants to vacate the building. “As of April there will no longer be a racist cultural centre operating in Hackney,” the organization said in a statement. The gallery’s sign has been taken down, though their website remains active, accusing their opponents of “regulating free-speech and contemporary Art galleries.”

07  It turns out the Mona Lisa is smiling after all—at least, according to scientists.

(via ScienceDaily)
A new study from of the University of Freiburg has found that the mysterious woman at the center of
Leonardo da Vinci
’s most famous painting is generally perceived as happy by viewers. Researchers showed participants the painting’s lips unaltered, alongside eight other versions in which the Mona Lisa’s lips were modified to curve slightly upwards or downwards. Despite the purported ambiguity of her facial expression among art historians, the study determined that a majority of observers viewed the actual curvature of the Mona Lisa’s lips as an indication of happiness. An enduring mystery not addressed by the study is why, exactly, the woman is smiling to begin with.

08  Oral arguments began in the First Amendment lawsuit over a high school student’s painting that was removed from display on Capitol Hill last month.

(via the St. Louis Post-Dispatch)
The work sparked controversy because it depicts police officers as animals within a composition centered on protests in Ferguson. The painting, by David Pulphus, was one of 400 pieces that hung in a Capitol Hill tunnel after winning an arts competition. Republican congressmen, who took issue with the work, surreptitiously and repeatedly removed it from the wall; it was returned three separate times. A formal complaint lodged against the work eventually resulted in its permanent removal. Missouri Congressman William Lacy Clay, who sponsored Pulphus’s inclusion in the exhibition, then sued the office which oversaw the arts competition. Lawyers for Pulphus and Clay made their case on Wednesday, arguing that taking the work down violated Pulphus’s free speech rights and calling for the work to be reinstated. A key legal question rests on whether the works on the wall amount to government speech, in which case the government can exercise editorial control over what is on the walls. But if the work is considered private speech made in a public forum, removing the piece violated Pulphus’ first amendment rights.

09  After a nearly four-year trial, acclaimed South African photographer Zwelethu Mthethwa has been convicted of murder.

(via Hyperallergic)
On Thursday, a Cape Town judge found
Mthethwa
guilty of murdering 23-year-old sex worker Nokuphila Kumalo. This verdict brought the drawn-out trial—during which time the photographer maintained his innocence, but refused to testify in court—to a close. Mthethwa became a suspect in the case in April 2013, after footage of Kumalo being severely beaten was released by CCTV; she eventually died from blunt force trauma. While a psychiatrist testified that Mthethwa could not remember the night of the murder, the judge countered that the defendant’s story appeared to be “untruthful and fabricated.” Mthethwa is a celebrated photographer who is represented by Jack Shainman Gallery in New York. His portraits of South Africans have been collected by illustrious museums including the Met, LACMA, SFMOMA, and Centre Pompidou. His bail has been withdrawn, and his sentencing is scheduled for March 29th.

10  Art Jameel announced a long-term partnership with the Met and plans to build a contemporary art institution in Dubai.

(via Art Jameel)
As one component of a multi-part initiative to support art and culture of the Middle East, the non-profit organization will open its first permanent exhibition space, Jameel Arts Centre Dubai, in winter 2018. Designed by UK-based architecture firm Serie Architects, it will offer 1,000 square meters of gallery space and host shows that draw from the Jameel Art Collection along with special solo and group exhibitions. A curatorial council including Jessica Morgan, director of Dia Art Foundation, and Murtaza Vali, a curator and writer, has also been established to guide the institution’s exhibition and growth strategy. Simultaneously, Art Jameel has forged a partnership with New York’s Metropolitan Museum of Art, which, according to Art Jameel’s press release, “will enable the Museum to acquire works by modern and contemporary artists from the Middle East.” In recent years, Art Jameel has introduced several visible  projects that connect the Middle Eastern art community to the West. In 2006, it joined forces with the Victoria and Albert Museum to establish its Jameel Gallery of Islamic Art; in 2009, they established the biennial Jameel Prize for “contemporary art inspired by Islamic tradition.”
Artsy Editors
Cover image: Photo by Spencer Platt/Getty Images.
Related Stories

Who Stands to Lose the Most if the NEA Is Eliminated? 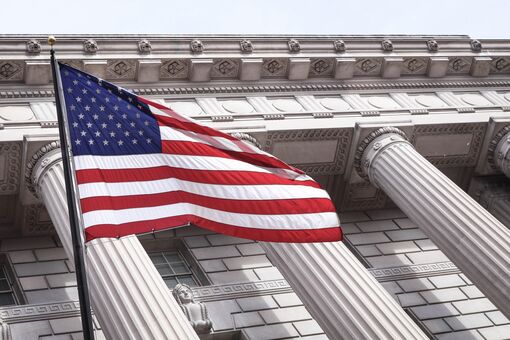 Who Stands to Lose the Most if the NEA Is Eliminated?
Isaac Kaplan
Jan 30, 2017 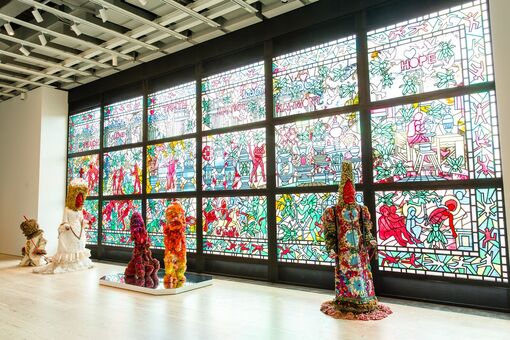 The 2017 Whitney Biennial Is a Pitch-Perfect Survey of Art Today
Tess Thackara
Mar 13, 2017