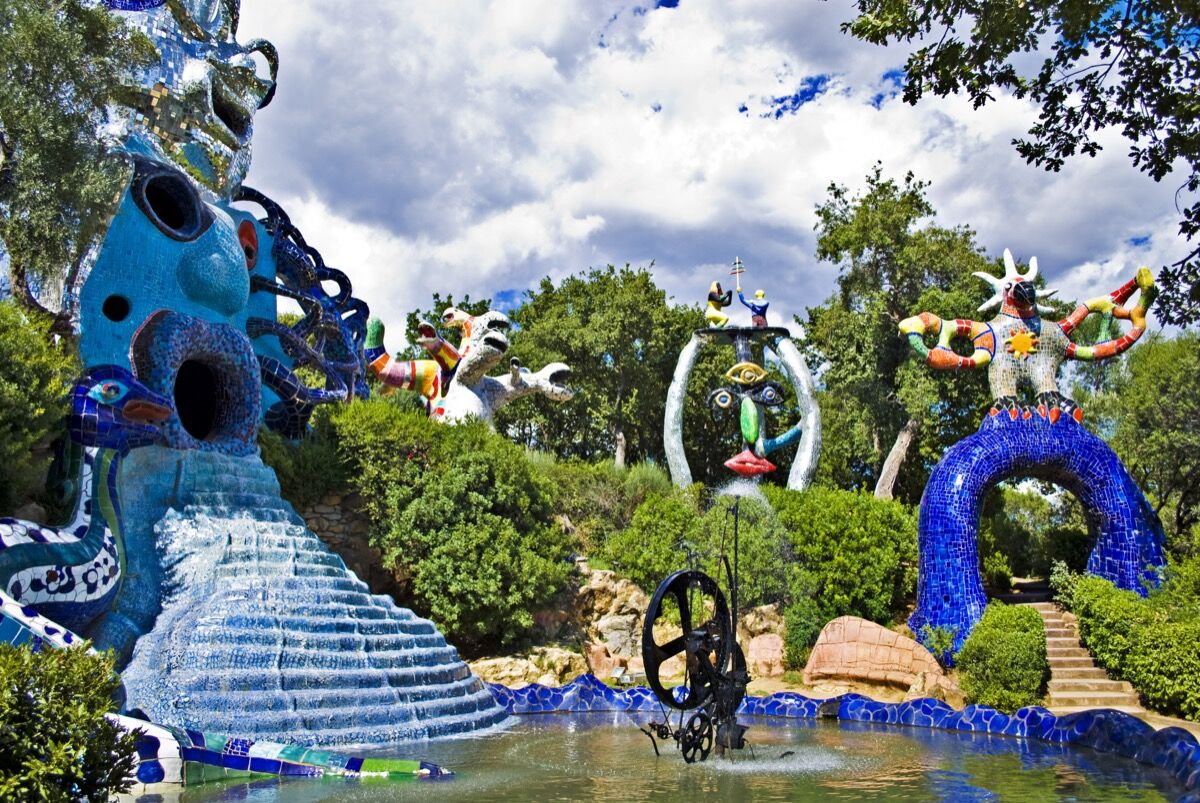 Upon driving into the historic Italian village of Capalbio in Tuscany, glimmers of light begin to appear against the lush countryside in the distance. Soon, as you draw closer, it becomes clear that the sun’s rays are bouncing off of a series of large, otherworldly objects. This means one thing: You have arrived at
Niki de Saint Phalle
’s Tarot Garden. An elaborate, 14-acre sculpture park, it’s filled with 22 sculptural tarot cards—works by the late French-American artist that take shape as fantastical goddesses.
Saint Phalle first hatched the plan to build her own public sculpture park in 1955, after venturing to
Antoni Gaudí
’s famed Park Güell in Barcelona. “I met both my master and my destiny,” she once said of encountering Gaudí’s sprawling outdoor work. “I trembled all over. I knew that I was meant one day to build my own garden of joy.” Forty-three years later, in 1998, the Tarot Garden opened to the public, and that dream—perhaps the most ambitious adventure of her life—was realized.
Saint Phalle commenced the project by securing a plot of land that belonged to the wealthy Neapolitan Caracciolo family. She met with brothers Nicola and Carlo Caracciolo, who were taken by her effusive, endearing nature; they gave her a parcel of their estate, atop Etruscan ruins. Saint Phalle would go on to fund the project in large part by producing cobalt-blue perfume bottles topped with an emblem of intertwined snakes. 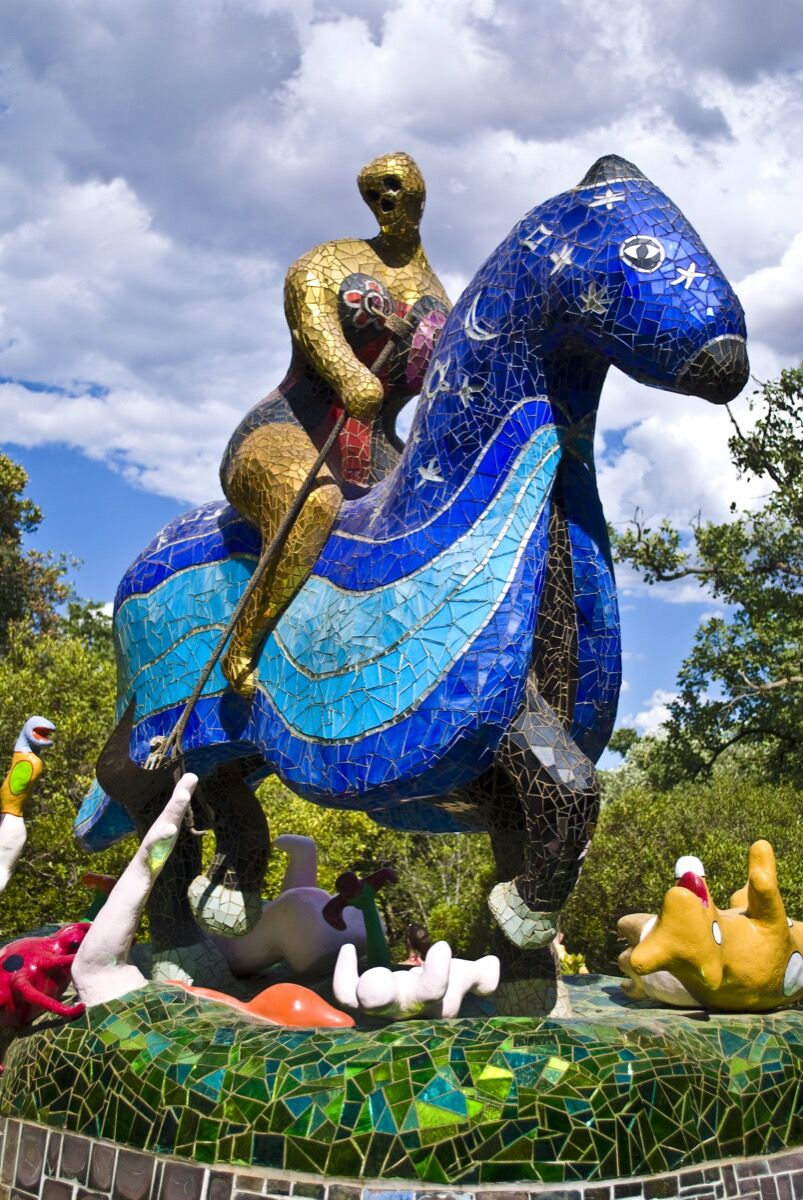 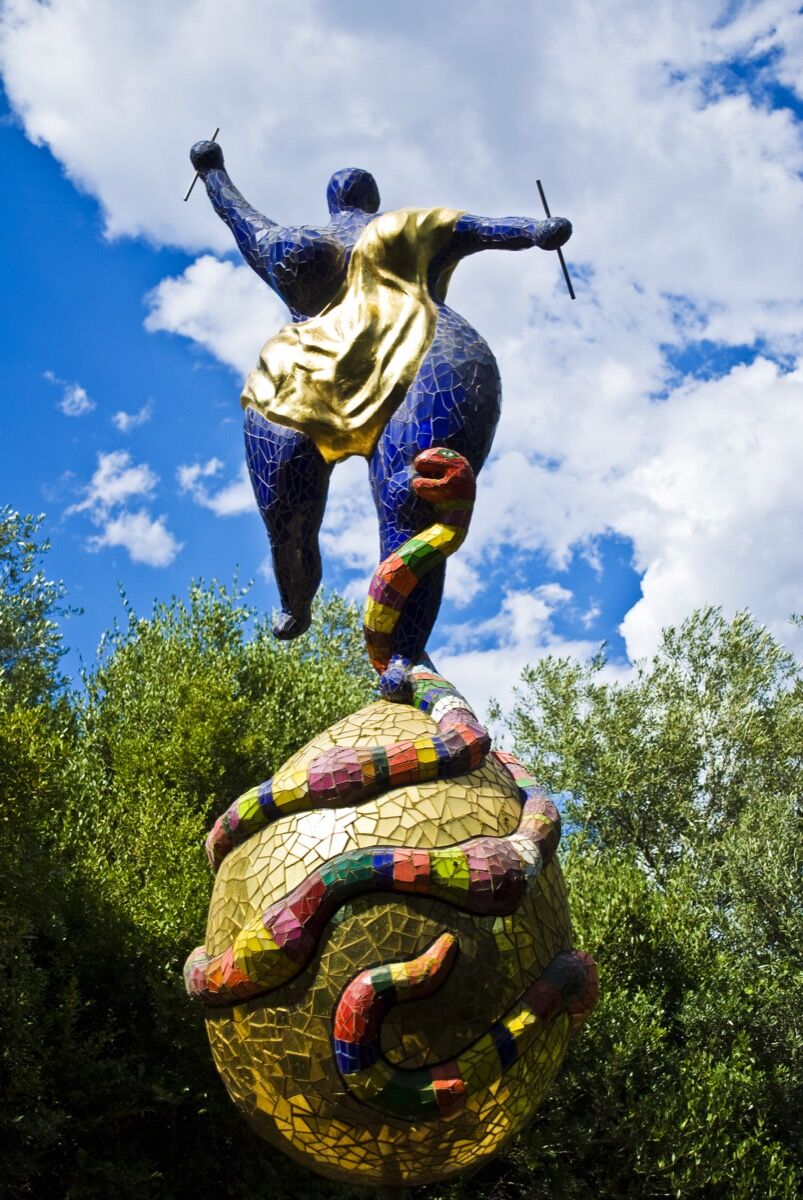 Over the course of the two decades it took to build the Tarot Garden, Saint Phalle struggled with severe health problems, though she was undeterred, determined to create “the greatest sculptures of her generation…bigger and stronger than those of men.” Her mission was primarily to celebrate femininity, which is typified by the signature voluptuous dancing ladies that appear in her work, known as “Nanas.”
Upon arriving at the Tarot Garden, you must pass through a fortress-like stone wall with a celestial, circular gate, designed by
Mario Botta
. The precipice marks the end of our world and the beginning of Saint Phalle’s Edenic creation.
Inside, you’re greeted and guided by larger-than-life sculptures, each one inspired by a tarot card. First, you’ll see the giant, silvery Magician—a sculpture of a hand that faces upwards as if primed to draw from the tarot deck. Below it lies The High Priestess of Intuitive Feminine Power, who spouts water that trickles into one of
Jean Tinguely
’s kinetic iron machines, The Wheel of Fortune. (Tinguely was Saint Phalle’s longtime lover and collaborator; his iron sculptures feature throughout the Tarot Garden.) Opposite, you’ll encounter Strength, which takes the traditional form of St. George and the Dragon, but in this case, the beast’s conqueror is female. 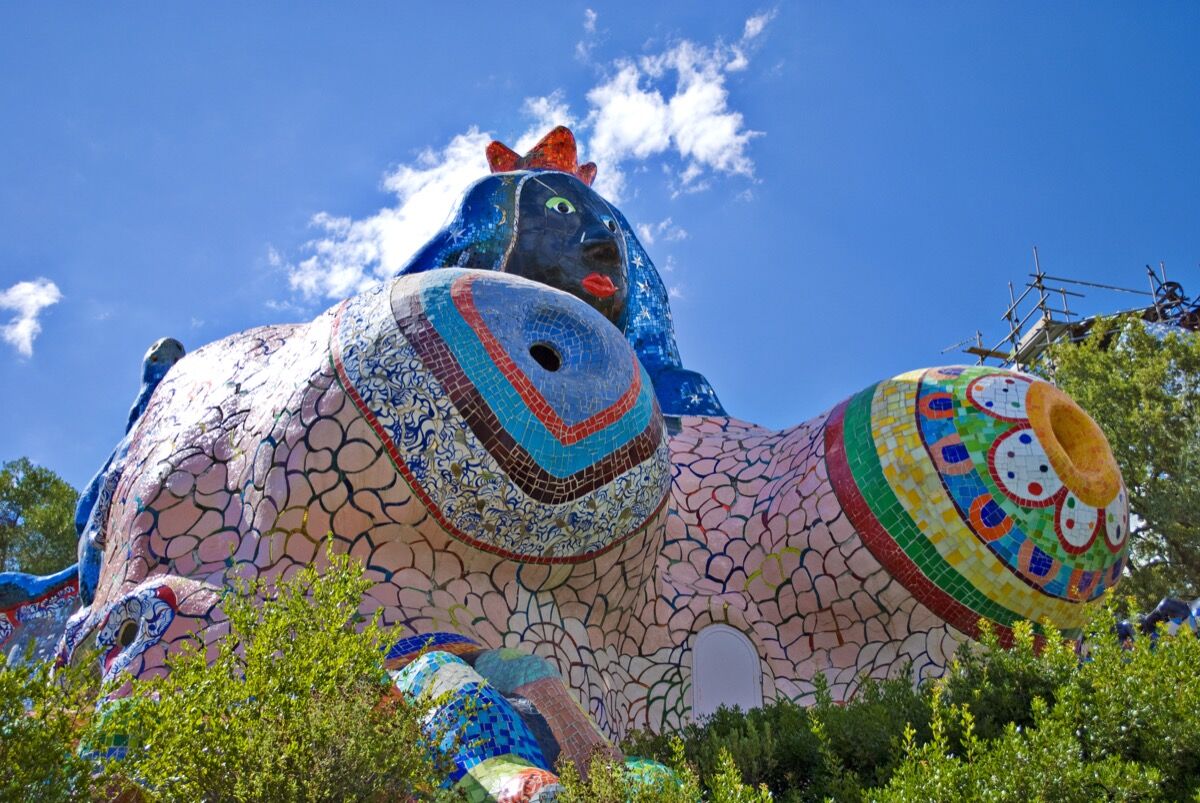 Advertisement
Walking down pathways imprinted with hand-carved Greek lettering, you enter into The Emperor: a mystical climbing structure, which is often teeming with jubilant children. Its tiled-walls tell stories of love and loss and its pillars are punctuated by question marks that not only reflect the tarot’s ambivalent nature, but Saint Phalle’s troubled and wild psyche.
Keeping watch over the park stands the sphinx-like Empress, whose breasts once served as the artist’s home in the park. Saint Phalle designed it as a hallucinatory, mirror-filled space, with a fully functional bedroom, bathroom, and kitchen—complete with electrical outlets and a dishwasher. The living space also served as the park’s headquarters, where Saint Phalle would instruct her (primarily male) employees—who often referred to her as their “second mother”—on their daily tasks.
“Niki very much engaged with the local people and would become friends with them on an equal level,” says Marella Caracciolo Chia, daughter of Nicola Caracciolo, who grew up nearby, witnessing the evolution of the magical garden. “She would even become the witness at their wedding! She was godmother to so many children.” 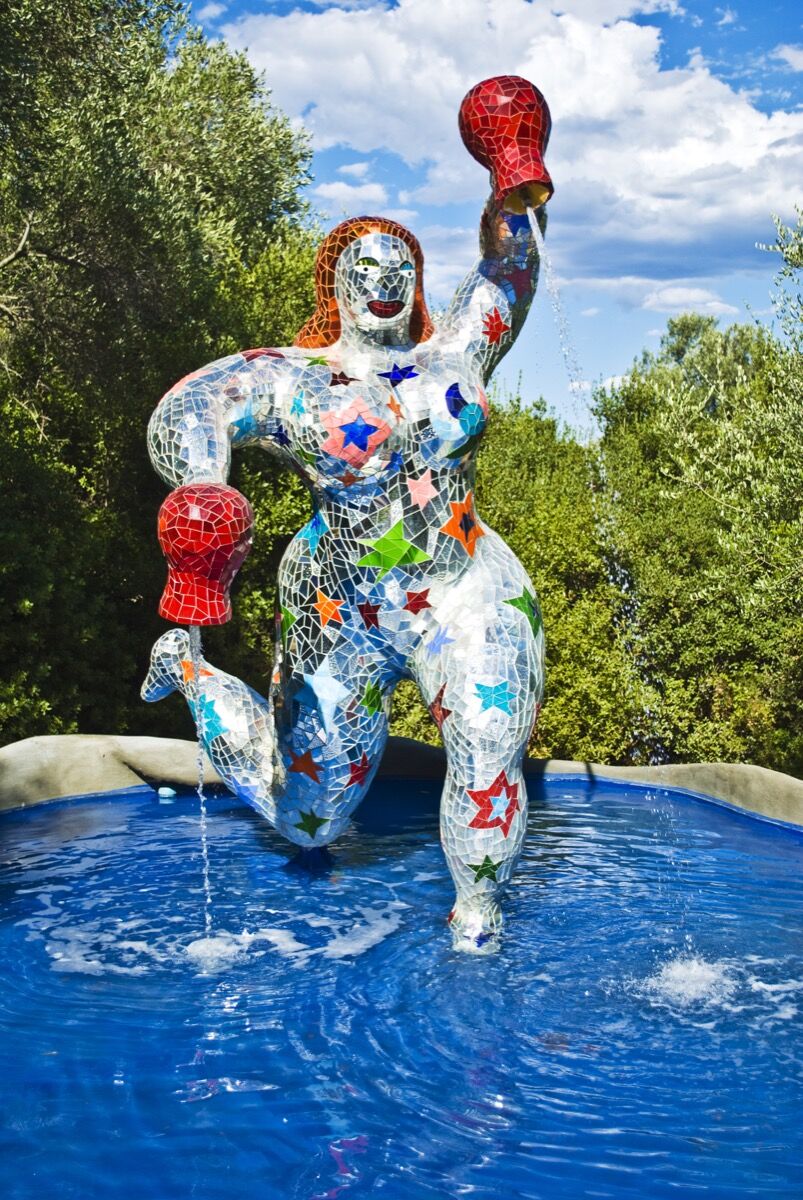 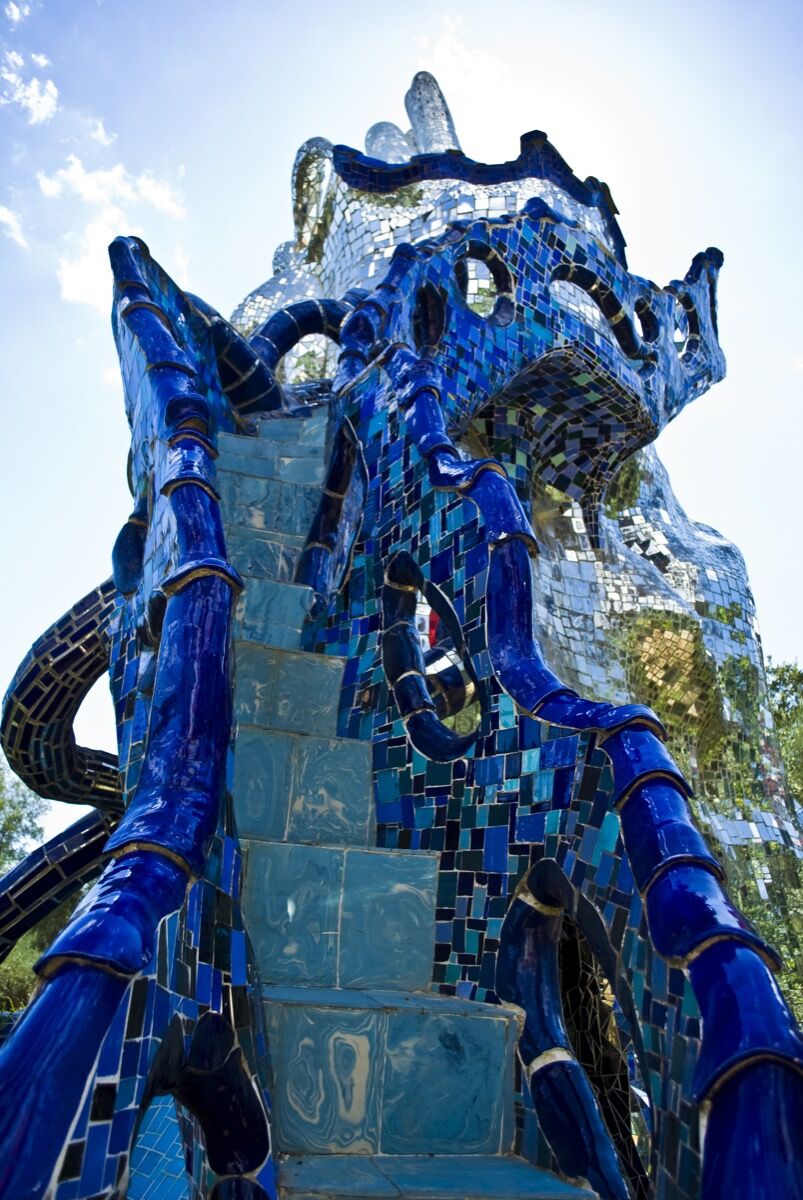 Saint Phalle, who referred to herself as the garden’s “architect,” made a point to acknowledge the contributions of others that had brought the park to fruition. Take for example the pillars in the Emperor’s courtyard, which are adorned with the names of all those who helped—from glass-cutters to iron-welders, ceramicists to cooks. Or the igloo-shaped chapel on the edge of the garden, where a more personal shrine stands to her longtime assistant, Ricardo Menon, who died of AIDS in 1989.
As you leave the magical garden and venture back into the Tuscan landscape, it feels like stepping out of Saint Phalle’s wonderfully imaginative mind. Not only does the garden leave you in awe of the extent of the artistic endeavour, it also fills you with Saint Phalle’s spirit. The artist’s legacy lingers palpably, empowering visitors far beyond the completion of their pilgrimage.
Katy Hessel
Related Stories