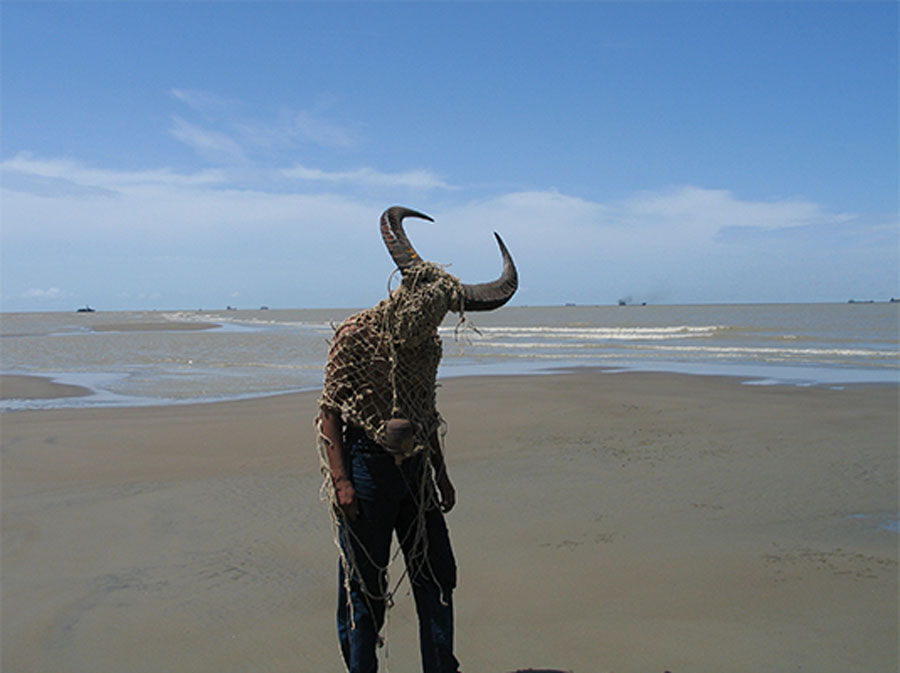 In March 2015, on the streets of the Bangladeshi capital, Dhaka, a blogger was murdered. It was but one killing in a spate of bloody attacks in the country by Islamist radicals on writers who mocked and criticized extremist elements of the religion. Predictably, the combination of brutality and religion attracted the fickle attention of the West. But the story was remarkable for another reason that has been less examined in the media: Two of the three assailants were caught thanks to the actions of Labannya Hijra, a transgender woman who witnessed the killing and retrieved the shirts of the blogger’s fleeing murderers.
In Bangladesh, members of the transgender community—some of whom go by “hijra,” the South Asian word for those born male but who identify as female—are thought to number somewhere between 10,000 and 500,000. They are roundly marginalized, facing poverty and legal and societal discrimination, though they recently won the right to officially identify as a third gender. But, notes British-Bangladeshi writer Tahmima Anam in her sobering op-ed in the New York Times, “it would be premature, to say the least, to pronounce the troubles of the hijras over.”

The Bangladeshi artist couple
Tayeba Begum Lipi
and Mahbubur Rahman—who, though they share concerns, primarily work independently—have long engaged with the experiences of the transgender community in their homeland, spurred by a close friendship with Anonnya, a transgender woman. “We’re told from childhood that they’re different, they’re alien,” says Lipi of the prejudices instilled in her and others. In the years since they first met, tearful conversations with Anonnya about her life and hardships, shared over cups of coffee, have evolved into an enduring artistic collaboration focused on a common humanity.
Lipi and Rahman, whose works also touch on a multiplicity of related subjects including gender, politics, and femininity, are currently the focus of “The Artist as Activist,” the pair’s first retrospective on U.S. soil, now on view at the Michigan State University’s Broad Art Museum through August 7th. It’s a large, ambitious show that offers Americans the potential to view a country that is rarely thought about, through issues that are seldom considered in relation to it. 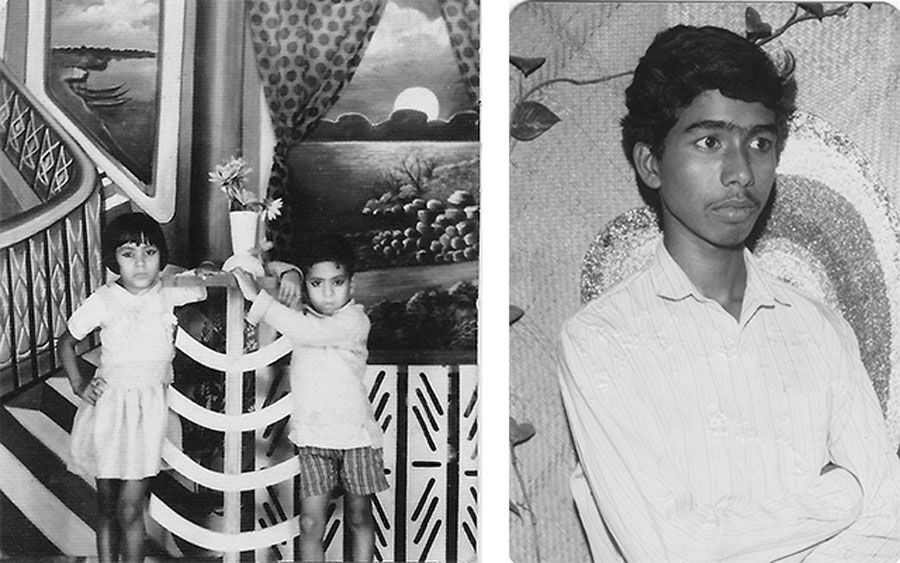 Tayeba Begum Lipi, When the Life Began (2014). Courtesy of the artist and Shrine Empire Gallery.

Advertisement
While her husband’s practice engages in broader conversations surrounding performativity, Lipi looked inwards for this show, exploring how she and Annonya have traveled such separate paths through life and been perceived so differently. She thought about finding a shared root, gathering common objects from each of their childhoods, starting with toys. But Annonya, who moved constantly in her youth because no one wanted to rent her family a house, had no such objects in her possession. Instead, Lipi created When the Life Began, (2014), a work comprised of four lightboxes that show black-and-white photographs of Lipi and Annonya at a young age. As they grew older, says curator Caitlín Doherty, “Annonya’s life became very much on the periphery, very much outside the traditional value system that Lipi remained within.”
In Lullaby (2014), Lipi opted for a more intangible connection. The work consists of a pair of painted fiberglass casts of Lipi and Annonya’s faces hanging side by side, while headphones play the two singing a popular lullaby. “There is nothing to distinguish which is Annonya and which is Lipi,” says Doherty, who notes the work questions and undermines the ways in which transgender people are ostracized. “What is differentiating us? Why are we differentiated? How are we differentiated? When everything is stripped away, when what society is using to differentiate us is taken away, we’ve come from the same place.” 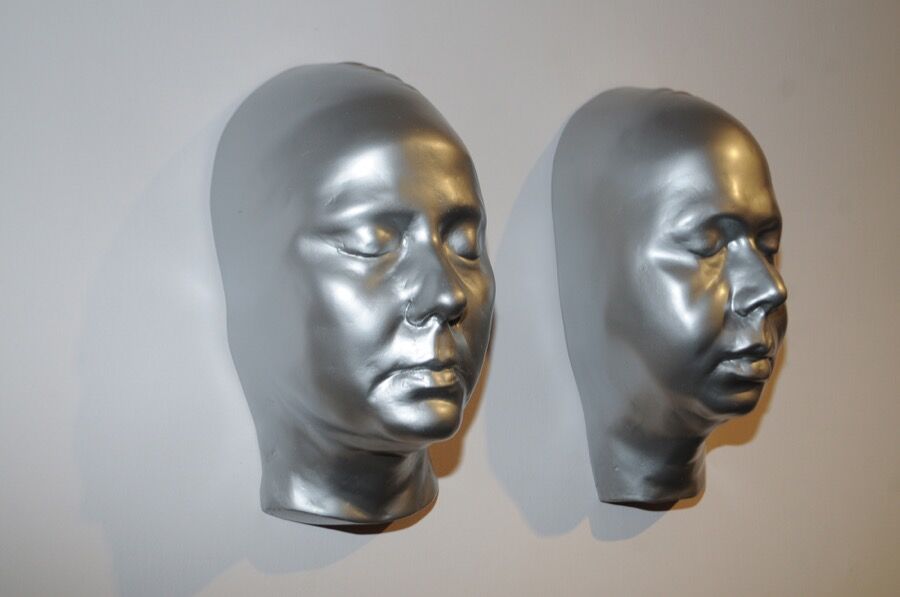 Another piece, Home (2014), draws on those long, early conversations between Lipi and Annonya. From hours of dialogue, Lipi distilled them down to 7minutes and 23 seconds, crafting a two-channel video work that juxtaposes Annonya’s testimony with Lipi digging a grave. Annonya was eager to share her experience, believing that a dialogue could drive meaningful change.
Just as Lipi’s works are tied to her own history yet speak to universal concerns, so too does her art arise from specific conditions in Bangladesh yet speak to a global climate of hostility towards the transgender community. In 2015, Amazon debuted the second season of Transparent, a critically acclaimed drama starring an L.A. parent in the midst of transitioning, and former Olympian-turned-transgender icon Caitlyn Jenner appeared on the cover of Vanity Fair. That same year, however, more transgender people were murdered in the United States than in any other year on record. It’s clear that here, as abroad, transgender people face discrimination and oppression that the art of Lipi and Rahman can equip us to address and—hopefully—end. 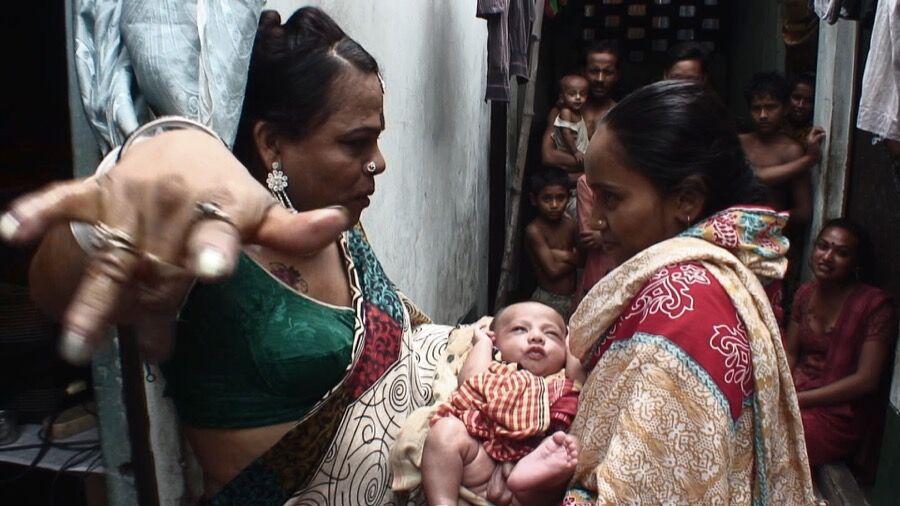 Mahbubur Rahman, Time in a Limbo (2014-15). Courtesy of the artist and Shrine Empire Gallery.

This international remit is embraced by the Broad. “Yes, the work is geographically specific, but it’s relevant in a universal way,” says Doherty. “These artists look to society around them, look to the very most core of themselves, and then bring up conversations which are hugely important, conversations which challenge the viewer to reconsider, to apply those conversations elsewhere socially,” she adds. “That, for me, is what makes this activism. It’s a calling out.”
Isaac Kaplan is an Associate Editor at Artsy.
“The Artist as Activist” is on view at Broad Art Museum, East Lansing, MI, Mar. 5–Aug. 7, 2016.
Related Stories