Rob Sharp
Jan 26, 2016 7:00am
English painter
Christopher Wood
’s The Bather (1925-26) depicts a central figure clad in a red swimsuit and baring a breast. Her body lies extended in front of a dark blue sea that laps up against the phallic outline of a lighthouse. This playful yet melancholic work appeared at “Coast,” a collection showcase organized by the small coastal institution Jerwood Gallery at the London Art Fair, which closed on Sunday.

“The coast is the essence of Britishness.”

The Jerwood launched in 2012 on the southern edge of Britain, in Hastings, relatively close to Margate’s Turner Contemporary, which opened the previous year and has contributed to the town’s reputation as a trendy seaside destination. Alongside the opening of a new arts complex in Southampton, coming this year, and growing economic pressures on artists to leave London, the exhibition’s consideration of coastal communities as both artistic enclave and creative inspiration is particularly timely. 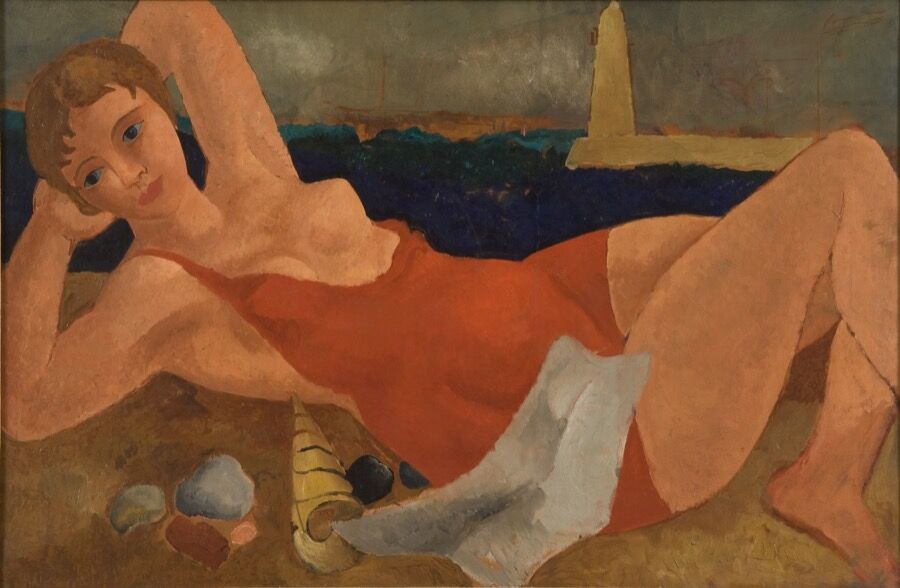 “The coast is the essence of Britishness,” says the Jerwood’s director Liz Gilmore. “Hastings is massively changing. The coast seems to attract artists. We have these astonishing areas of regeneration where there are huge clusters of artistic people.” Needless to say for a country that was once an imperial and maritime superpower, the ocean’s influence on the British imagination is hard to summarize. And current metropolitan overcrowding and the high cost of living make coastal cities a particularly pressing alternative to the city, and yield associated benefits.
In Hastings, a local authority-driven “cultural regeneration strategy” is ongoing. The Folkestone Triennial, up the coast in Kent, boosted the local seaside economy by £2.7 million in 2014, its organizers have claimed. There are countless examples of institutions capitalizing on and reinforcing British coastal cultural hotspots—from Tate St Ives to Liverpool’s Walker Art Gallery. 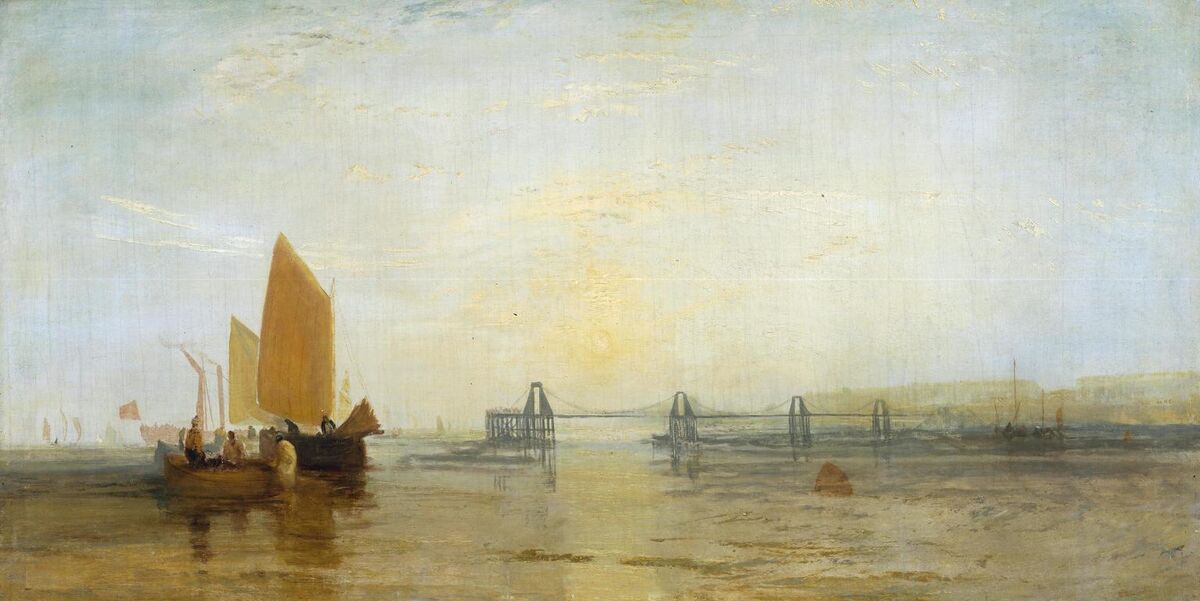 Advertisement
Wood painted The Bather in 1926 during a six-week trip to Cornwall, where he met painters
Ben
and Winifred Nicholson. Ben was one of the most influential members of the St Ives School of painters, an artistic group associated with the eponymous seaside town, later linked with Cornish painter
Peter Lanyon
and abstract artist
Roger Hilton
. Wood’s meeting with Nicholson came at a time of crucial development for both their practices. In 1928 the pair met Alfred Wallis, a fisherman and self-taught artist who used household paints to depict ships, coast, houses, and trees. The meeting between Wallis and Wood was a “critical turning point for Wood,” write Elizabeth Fisher and Jane Morgans in the catalogue for a 2013 show of Wood’s work at Kettle’s Yard, Cambridge. “I seem to live on the very edge of the world,” wrote Wood of his time in St Ives. “But what an edge it is. I love this place and could stay here forever.”
John Tunnard’s surreal Tide Race (1947), another work that featured in “Coast,” and which seems to show Hepworth-style objects in a nautical setting, was inspired by a different relationship with the water. During World War II, Tunnard was a conscientious objector, working as a fisherman and auxiliary coastguard. “I think the coast for him was a way of removing himself. That is an artist who has moved to the periphery of life, it wasn’t a practical decision,” said Gilmore. “His work blends before our eyes, and disappears into a sense of abstraction.” 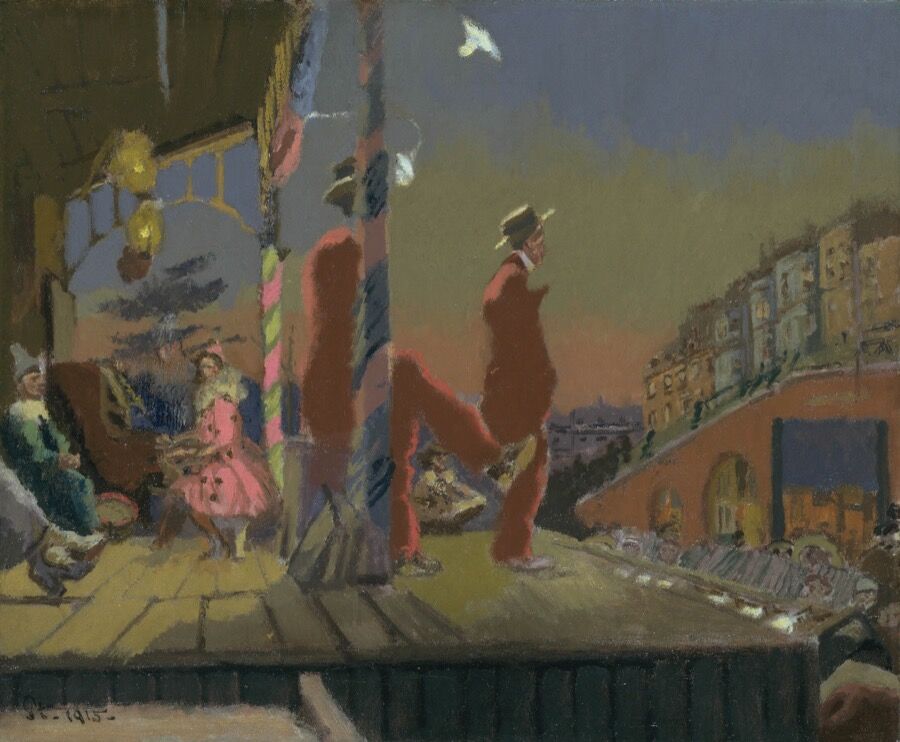 From the work of
J.M.W. Turner
to
John Constable
and
Ford Madox Brown
, the sea has long held a place in British national identity. Britain’s coastline is, for the most part, its border—and in the ages before air travel, it was the sole frontier travellers crossed to venture abroad. “It was the threshold that led to empire in the 18th century, and to emigration in the colonies in the 19th century; and it was a constant reminder of the possibility of invasion,” writes Christiana Payne, an art history professor at Oxford Brookes University, in the 2012 book Art and Identity at the Water’s Edge.
Much later,
Walter Sickert
took a holiday to the south coast and produced Brighton Pierrots (1915), based on the entertainments he saw there. Surrealist painter Paul Nash moved to Swanage on the Dorset coast in 1934, and reimagined the benches on the esplanade as swans in Swanage (1936). 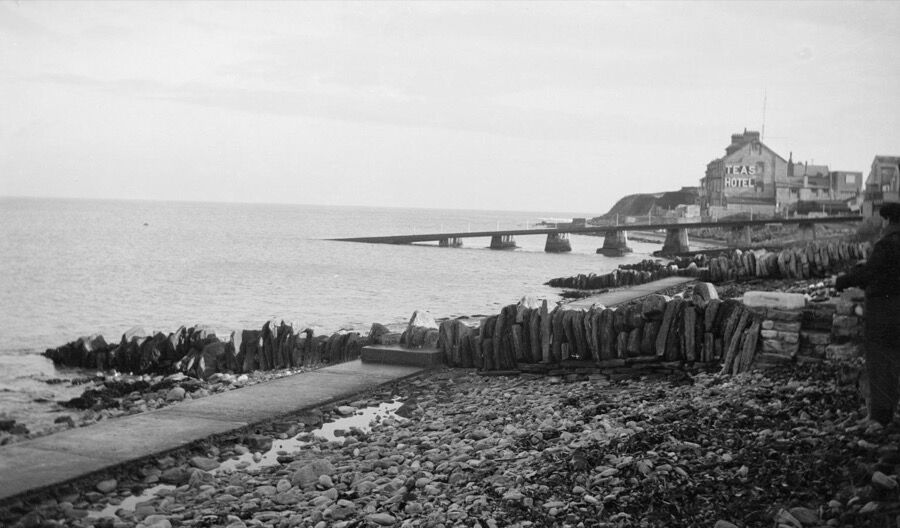 These days, Britain’s national identity, as seen at its edges, is just as likely to be played with.
Marcus Harvey
rose to prominence for his 1995 work Myra, which used copies of children’s handprints to create an image of notorious Moors murderer Myra Hindley. His work—which has incorporated coastal imagery such as the white cliffs of Dover, a famous symbol of British patriotism—will feature in a solo exhibition at the Jerwood Gallery from July. In Historic Head (2015), Harvey recreates the form of a philosopher’s head from military memorabilia and casts of hands, while Maggie Island (2015) shows a reclining, sexualized Margaret Thatcher combined with recreations of pig body parts.
“It seems a trite and obvious thing to say, but it is worth remembering that we have been lulled into a false sense of optimism in a digital era, that truth is instantly accessible,” says Harvey. “The idea of asserting physical boundaries and landmass have become important to me… It fits nicely for me with a current feeling about Britain’s place in the world, and its relationship with Europe.” 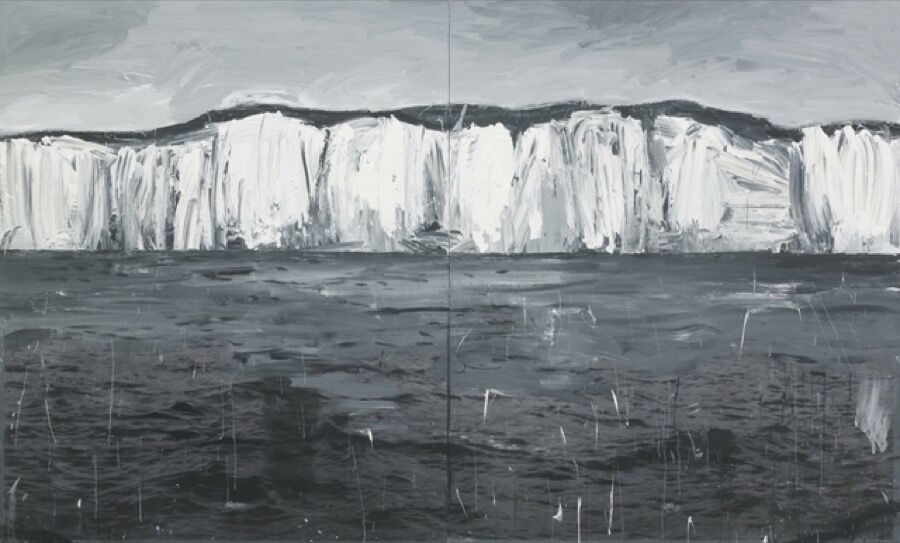 To Harvey, the coast exemplifies Britain’s continuing struggles with nationalism, immigration, and cultural integration, all transpiring against the backdrop of economic inequality. “We are a smallish island surrounded by a significant amount of water,” he adds. “Natural geographical boundaries as profound as these will constantly reflect an independent and differentiated sense of national identity. All these historical ideas—I don’t think it’s being conservative to say they are still at play.”
Rob Sharp
Related Stories