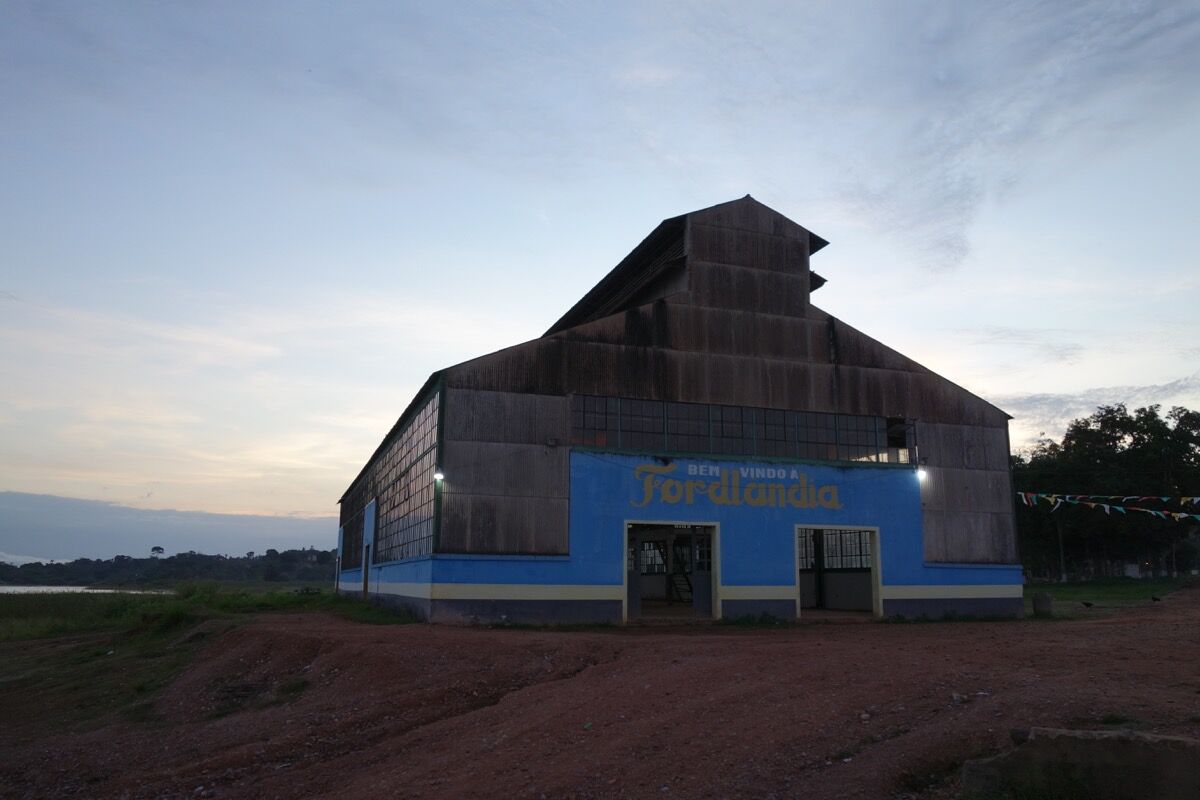 Deep in the Amazon rainforest, located a 12-hour boat ride away from the Brazilian port city of Santarém, sits the tiny town of Fordlandia. The brainchild of American industrialist Henry Ford, it was founded in the late 1920s to provide a consistent and inexpensive source of rubber for his automobile empire. But he also had another, grander, ambition in creating the town: to develop the formula for an ideal American city. With Fordlandia, he hoped to revolutionize the fabric of society, in the same way that he had revolutionized manufacturing.
The utopianism (and hubris) of Fordlandia is evident from its name alone. Ford, notoriously scornful of experts, refused to consult scientists about the project. If he had, he would have learned that the Amazon harbors the very pests that make it impossible to plant large swathes of rubber trees side by side without making them fatally susceptible to infestation. He also imposed strict rules on the residents—prohibition, combined with a regimented diet of wheat bread, brown rice, and tinned peaches—that incited rebellion. Fordlandia was soon a haven for knife fights, riots, and venereal disease. In 1945, Ford’s grandson sold the property back to the Brazilian government, cementing its fate as a failed experiment in American idealism—an idealism, it should be noted, that was tainted by Ford’s staunch anti-Semitism.
This fall, architect Azusa Murakami and artist Alexander Groves, known collectively as
Studio Swine
, have resurfaced Ford’s utopia for their new show “Fordlandia.” Held at Fashion Space Gallery and concurrent with London Design Festival 2016, the exhibition imagines a world in which the city didn’t fail. Rather, nature and industry entered into, in their words, a “symbiotic relationship.” The show is installed to resemble a living room in a fictional Fordlandia laborer’s home, “set up as if the town was a success and existed as a rubber-producing town today,” Groves told Artsy via email.

There are chairs fashioned from sinuous strips of ebonite, a hard black rubber, which was once used for car batteries; cushions made from the skin of the pirarucu (a large Amazonian fish); and a table crafted from reclaimed ipe hardwood (also known as Brazilian walnut) and inlaid with rubber. The scene is finished off with textiles and denim work jackets hung on the walls, the designs of London College of Fashion graduate Emma Fenton Villar and student Erica Weide.

At first look, Fordlandia seems like an incongruous inspiration for Studio Swine. Their work often incorporates themes of sustainability; in one particularly novel project, they repurposed discarded human hair to create combs and polished vessels. In another, they melted down ocean debris to make eco-friendly stools. The American automotive industry, on the other hand, has long been notorious for its wastefulness. Yet Ford, in some ways, was something of an outlier. “The more we discovered about Henry Ford, the more we found him a great inspiration,” Groves explained. Ford developed the first plastic car using a soybean-based material created in his laboratory in Greenfield Village, which was lighter and therefore more fuel-efficient than metal cars. He hated waste; in his Model T factories, employees recycled wood, paper, and cardboard. And he was even a vegetarian.

Advertisement
Today, partially bolstered by an uptick in media coverage and tourism over the past decade, Fordlandia is home to some 3,000 residents. Studio Swine first heard about the city in 2013, while living in São Paulo and working on another project. The story immediately caught their attention, Groves said. “It held a great fascination for us because we love crossovers. The automobile industry and suburban American houses in the remote reaches of the Amazon rainforest was the ultimate odd couple.”
Known for projects that require intensive research, Studio Swine traveled to the western part of the Amazon to stay with rubber tappers in the forest, then ventured to Fordlandia itself. They even visited the last ebonite factories in the world, located in Japan and Germany. “We also rooted through the archives of the Ford Museum in Detroit and read books on rubber—a material that we hadn’t thought about before this project but now is something of an obsession,” Groves said.
It was an obsession for Ford, as well, who by the end of his life had pumped $20 million into the development of Fordlandia. When the Ford Motor Company finally abandoned the land, they sold it to the Brazilian government for $244,200. An utter failure in its time, perhaps—but it’s found a second life now, through Studio Swine.