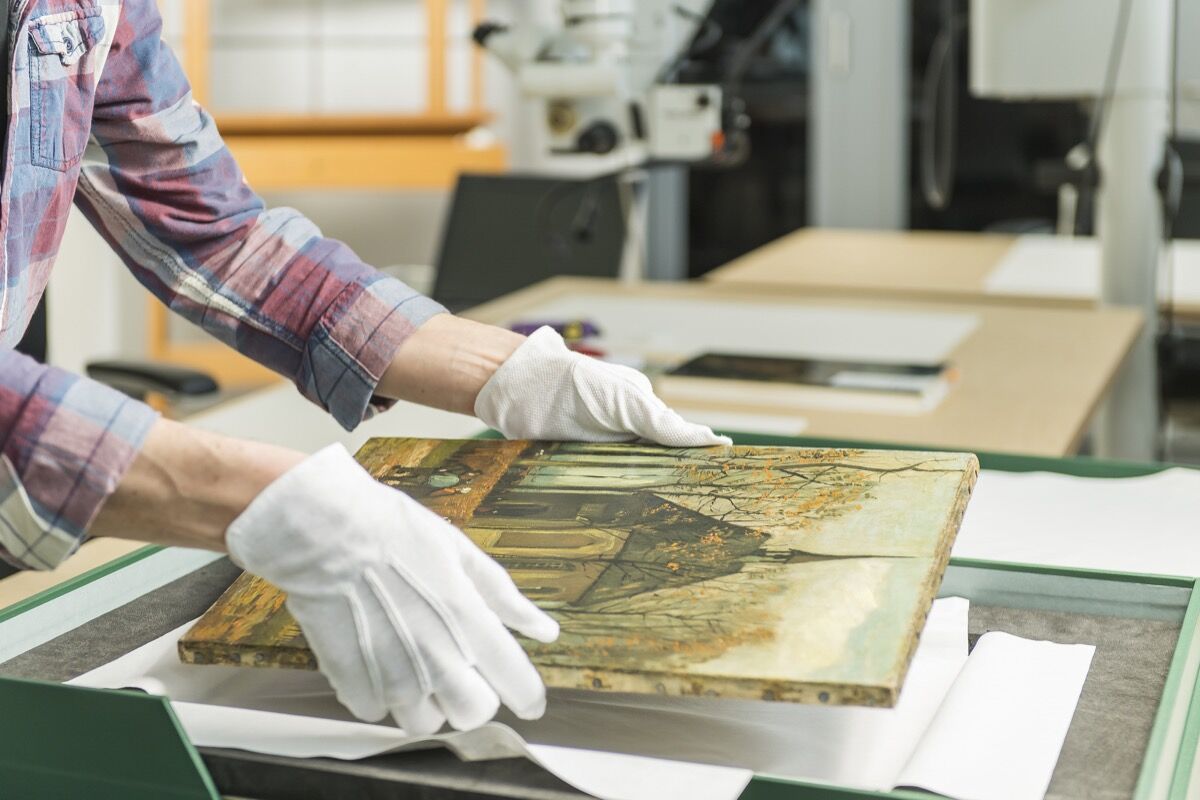 “We haven’t been able to tell their story for more than 14 years, but starting today, they again have a face and a voice! They’re home at last!” proclaimed Axel Rüger, director of the Van Gogh Museum in Amsterdam, during a press conference Tuesday. Rüger had reason for celebration: More than a decade after a 2002 heist in which thieves stole a pair of paintings by
Vincent van Gogh
from the museum, both works have been recovered by police and are on view to the public, starting today.
So how did View of the Sea at Scheveningen (1882) and Congregation Leaving the Reformed Church in Nuenen (1884–85) get nabbed in the first place? How did they end up in a mafia safehouse in Italy? And what did one of the thieves reveal in a new tell-all documentary?

It happened in just three minutes and 40 seconds, the New York Times reported.
On the night of December 7, 2002, Octave Durham and Henk Bieslijn used a ladder to scale the side of the Van Gogh Museum. Then, with a sledgehammer, they smashed one of the windows, climbed inside the building, and took two nearby paintings from the gallery they had entered.
Both were relatively early pieces, created before van Gogh had arrived at his signature style. One was a seascape from the artist’s time spent in the Hague, remarkable for its deft use of paint, as the artist had primarily devoted himself to drawing up until that time. The other work, depicting the church where the artist’s father was a pastor, was meant to be a gift for van Gogh’s mother, who had broken her leg. 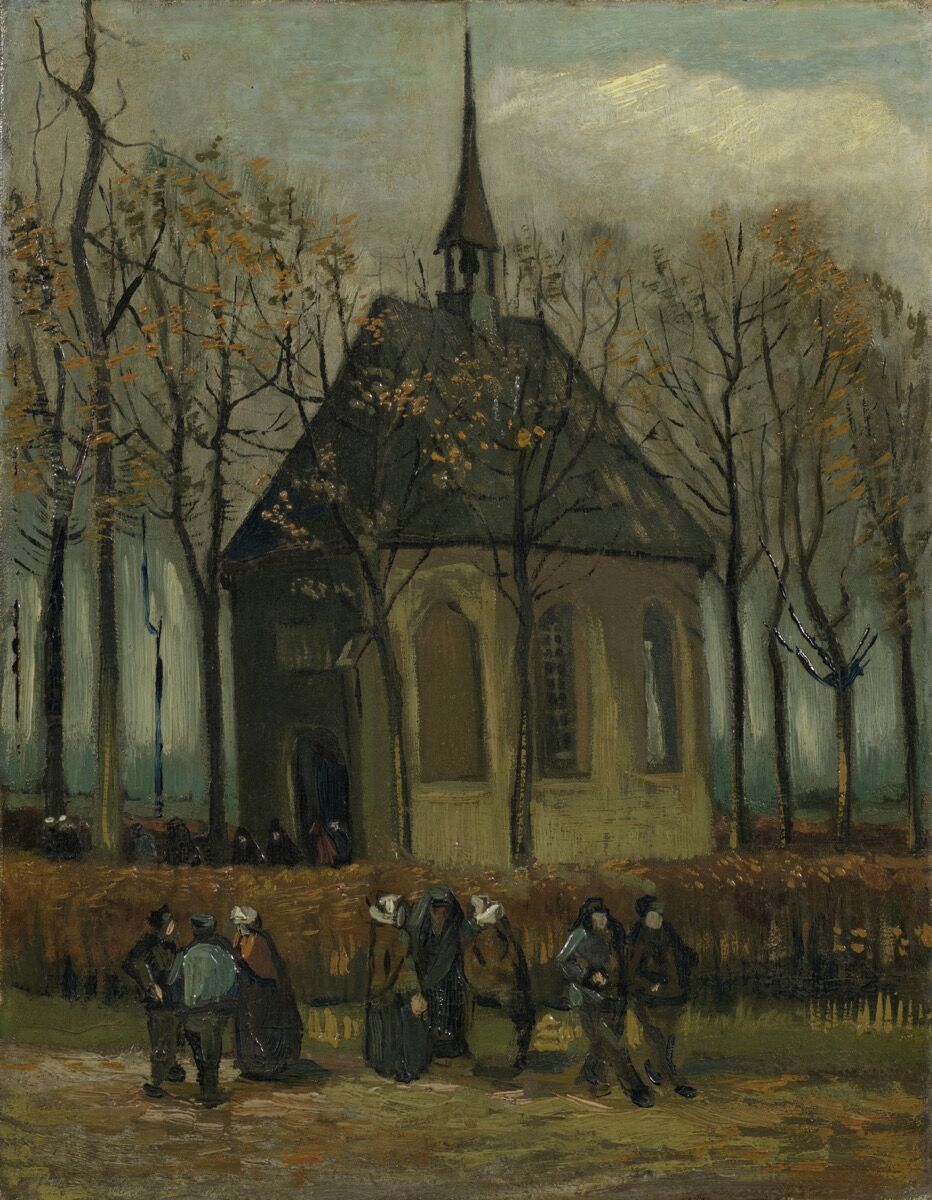 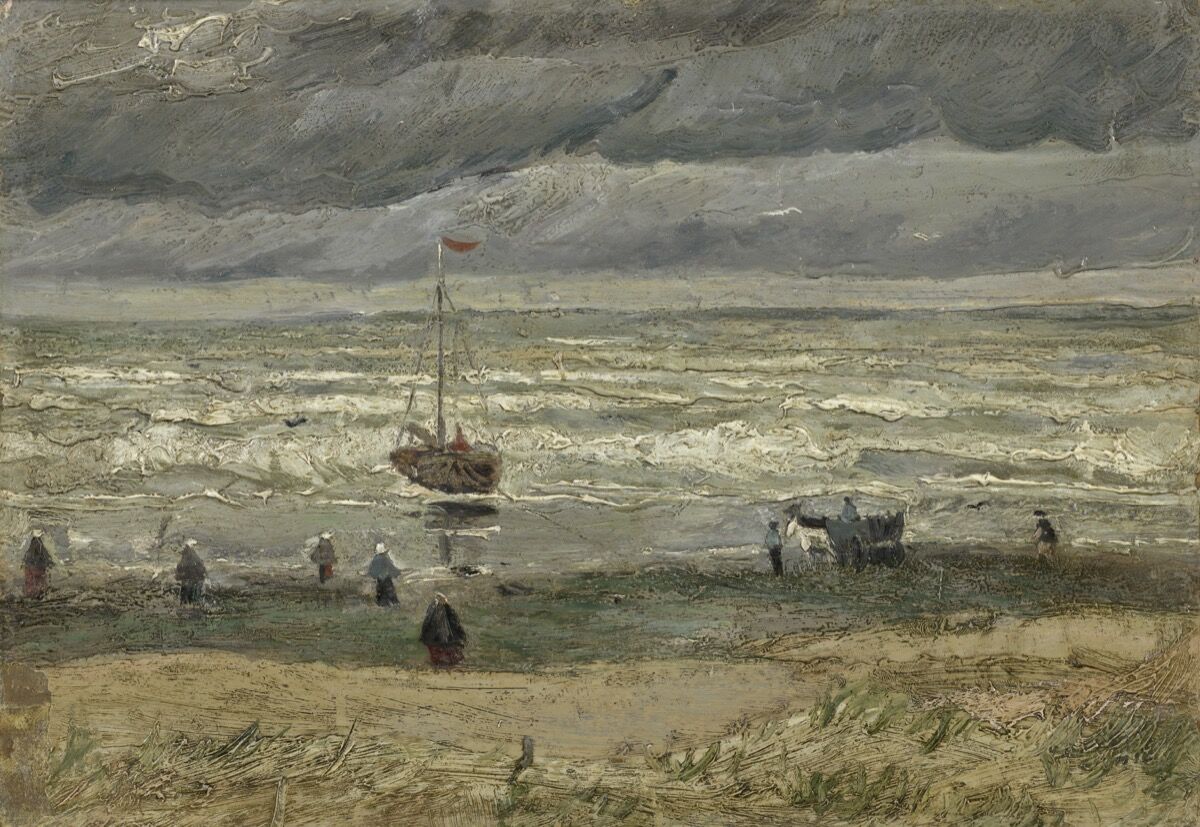 Vincent van Gogh, View of the Sea at Scheveningen, 1882. Courtesy of the Van Gogh Museum.

Given that these paintings had never hit the open market, their value remains difficult to ascertain. One estimate, made at the time of the theft by the museum’s then-managing director, put the pair at a combined $4 million, according to the New York Times.
One of the mysteries following the original heist surrounded the decision to take these particular paintings. Some burglars—like the notorious “Spider-Man” thief who was sentenced last month—consider themselves connoisseurs, stealing works that strike their fancy. But in a new documentary focusing on Durham that aired on Dutch TV the same day the van Gogh paintings went on view, the thief said he simply took the two works because they were the smallest in the room.
As the pair escaped by rappelling down a rope out of a museum window, a museum guard called the police. During the descent, Durham hit the ground with such force that he damaged a corner of View of the Sea at Scheveningen. Visitors to the Van Gogh Museum today can see the damage to the work (both are displayed sans-frame, as they were found, and will be restored following the conclusion of their exhibition on May 14th).
Durham monitored the responding officers on a police scanner, and was able to get away by taking off his ski mask before he drove by them.
“It’s the worst thing that can happen to any museum that a property is stolen, but for any museum it’s a risk,” former museum director John Leighton said of the the thefts, which occurred just one year before the institution celebrated the artist’s 150th birthday.

A Mafia Connection and an Arrest

After avoiding police, Durham and Bieslijn began work to sell the paintings. Selling looted art is notoriously difficult, given that it can’t appear on the open market, and as they found, underground deals have their own risks.
For instance, one person to whom Durham tried to sell the painting was shot and murdered on the day of the arranged sale, in a killing unrelated to the works of art. Another buyer, Raffaele Imperiale, a chief of the Camorra crime family, was identified for reportedly paying €350,000 for the paintings in March of 2003. He sent the works to Italy shortly after purchasing them, while Durham and his accomplice blew through the profits in six weeks.
The thieves’ extravagant spending tipped off police who were already on their trail, and had wiretapped their phones. When officers went to Durham’s house, he escaped by climbing up the side of his building; in the process he earned the nickname “the Monkey.” In December of 2003, cops caught up with Durham at a Spanish resort town and matched his DNA with that of a baseball cap left behind at the museum. 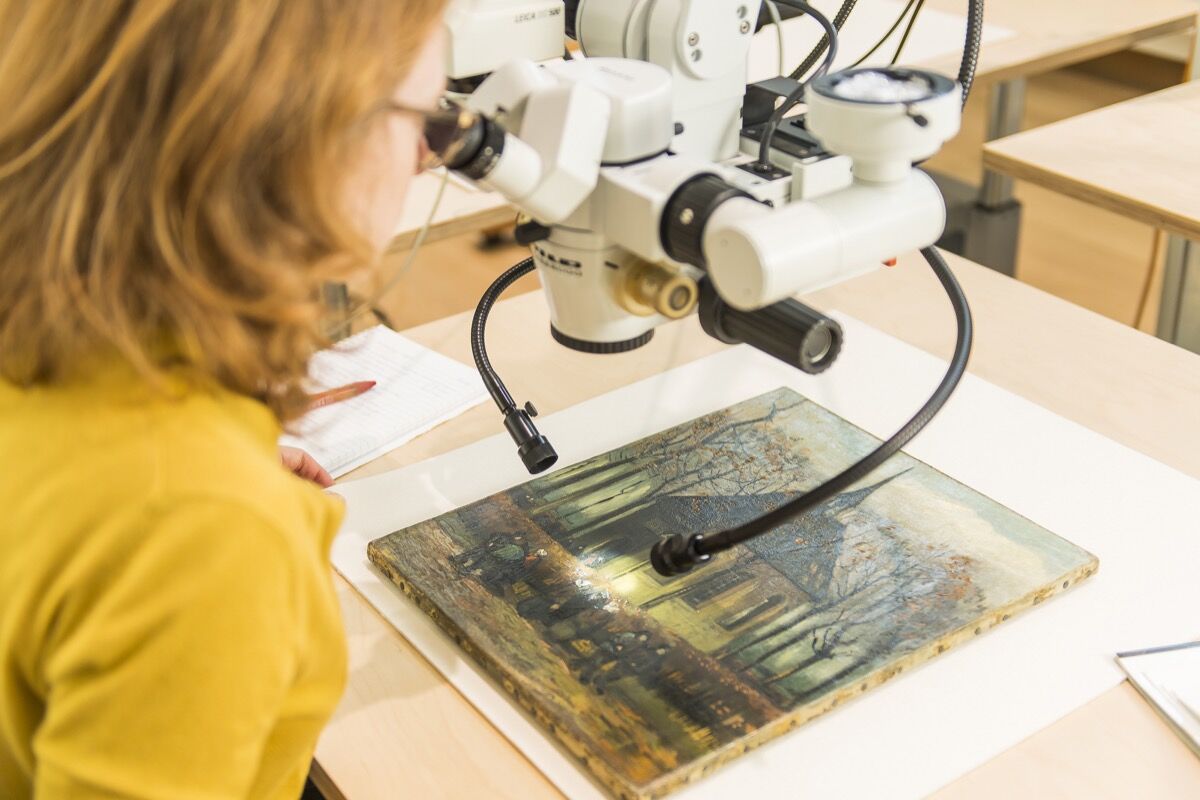 Advertisement
He spent three years in jail, and never revealed the whereabouts of the van Gogh paintings. Durham was released in 2006, then sent back to prison for a failed bank robbery. As part of his sentence for the heist, Durham was required to pay the museum €350,000 for the paintings, which were still missing at the time. (Durham managed to cough up under a fifth of what he owed.) He approached the Van Gogh Museum in 2013 about helping to find the works, but they broke off talks after it appeared that Durham wanted compensation for assisting in recovery efforts.
This is, in part, why the museum takes umbrage with the spotlight the documentary shines on Durham, who is now freed from the burden of his crime. The film’s creator Vincent Verweij said that Durham has not been paid and even confessed to the crime via text. Rüger told the Times that “the museum is the victim in this case, and I would expect very different behavior from someone who shows remorse.”

Even as the FBI listed the theft as one of its “Top Ten Art Crimes,” the works remained missing for years. Then Imperiale found himself in some legal hot water, and sometime during 2013–14, he fled to the United Arab Emirates, where he still lives. He has avoided some 20 years of prison time requested by Italian prosecutors for a myriad of crimes.
Perhaps looking for leniency, Imperiale wrote a letter dated August 29, 2016, to Vincenza Marra, the public prosecutor, saying that he had the van Gogh paintings. Marra told the Times that investigators had already been looking into rumors that he possessed the works (the letter did nothing by way of currying favor or reducing the sentence).
Then, in September 2016, Italian police raided the house of Imperiale’s mother as part of an investigation into the cocaine-trafficking Amato Pagano clan of the Camorra Mafia family. They confiscated some $20 million in assets. And there, hidden between two walls and wrapped in cloth, were the two van Gogh paintings, missing frames but otherwise in good condition.
Police in the Netherlands credited their Italian counterparts with recovering the works, and the pieces went on view for three weeks at the National Museum of Capodimonte in Naples, before being returned to Amsterdam. 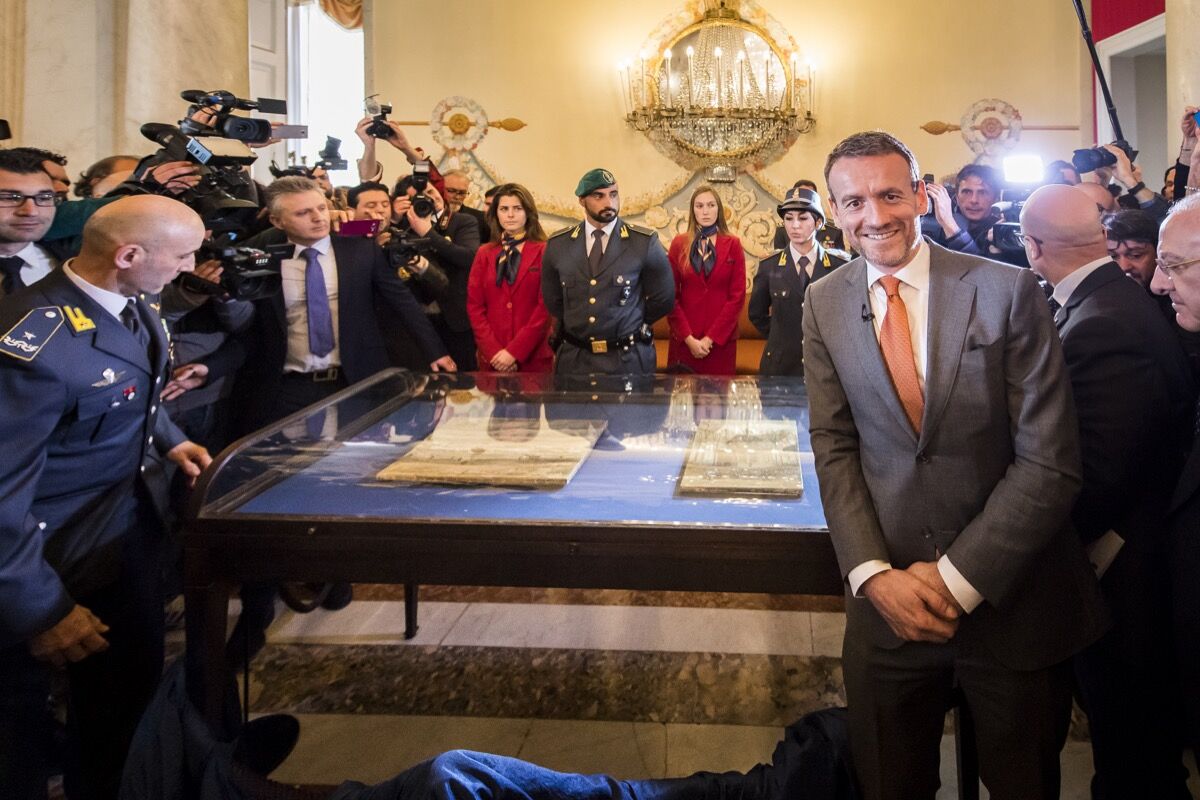 In less than four minutes, Durham and his accomplice stole works that remained hidden from view for 14 years. On Tuesday, Rüger was looking forward. “The homecoming of the recovered paintings means that our collection is once again complete,” he said as he unveiled the works. “And we can close the door on this particularly painful period in our history.”
Isaac Kaplan is an Associate Editor at Artsy.
Related Stories