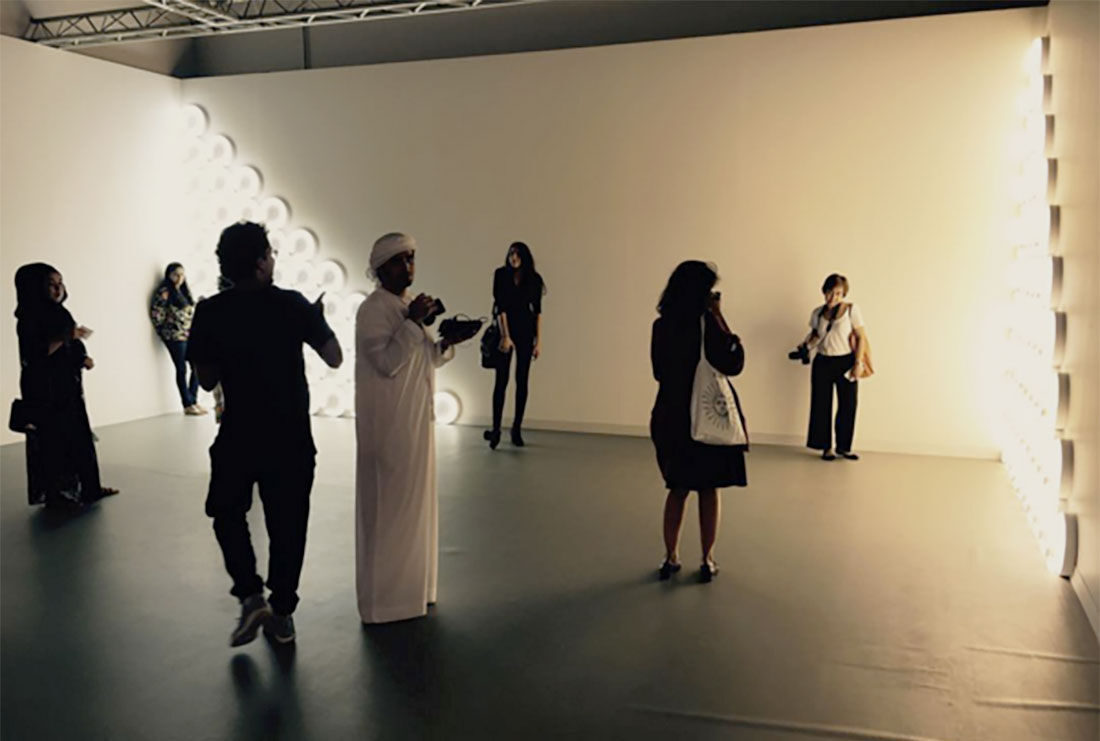 Abu Dhabi Art may be one of the the world’s smallest art fairs—at just 39 galleries this year—but it also takes place on the only plot of land in the world that will have designs by four Pritzker Prize-winning architects. All eyes look to Saadiyat Island and its cultural master plan, which will see
Jean Nouvel
’s Louvre Abu Dhabi materialize first, presumably by late 2016. The French architect gave a talk at the fair and discussed the museum’s dome, which, he said, will envelop the building “like a parasol” and “create a sky full of stars” at night.
Crowds packed at the entrance during Abu Dhabi Art’s vernissage, waiting for officials to complete a thorough sweep, which saw heavy security as Sheikh Hazza bin Zayed Al Nahyan (National Security Advisor and Vice Chairman of Abu Dhabi Executive Council) opened the fair. He was joined by Sheikh Nahyan Bin Mubarak Al Nahyan, Minister of Culture, Youth, and Community Development, as well as other dignitaries. The fair’s seventh edition, which drew in 20,000 visitors, took place once more at the 15,400-square-meter Manarat Al Saadiyat, smack next to the disused and rusty UAE Pavilion, a comparatively relic-like building designed by Foster + Partners. The fair is split into two halls, A and B, and both presented airy, well-lit booths. 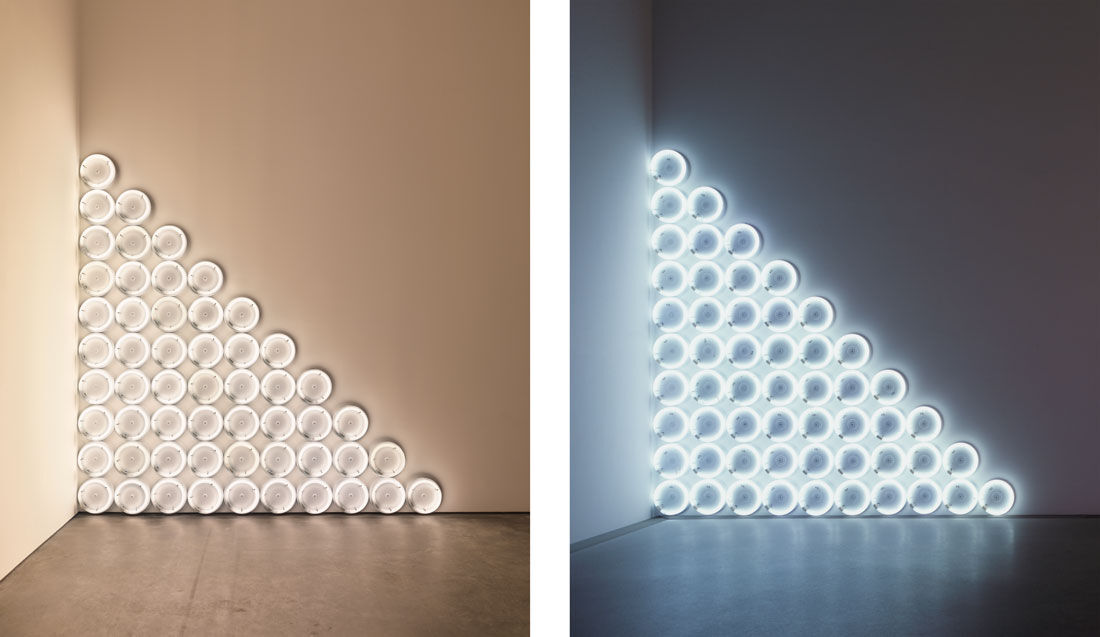 Overall, Hall A was visually and curatorially more appealing. Some of its standout booths included those of David Zwirner, Agial Art Gallery, and an impressive showing by Leila Heller Gallery. Noticeable in their absence were Beirut/Hamburg space Sfeir-Semler Gallery, which early on said it was not participating due to a clash in dates this year between Abu Dhabi and Ashkal Alwan’s multidisciplinary cultural forum, “Home Works 7,” in Beirut. Other absences in comparison to previous editions include Paris’s kamel mennour, which was included on the fair’s initial gallery announcement (on the fair website, the space is still listed), and New York’s Edward Tyler Nahem Fine Art. As far as museum groups were concerned, the British Museum’s Dr. Venetia Porter and the Guggenheim’s Richard Armstrong were spotted, both of whom were panelists during the fair’s talks program.
There was an air of tranquility in the minimalist presentation of
Dan Flavin
’s two seductive light installations at Zwirner, each priced at $1.8 million. The circular lamps—uncommon to Flavin’s practice—had been individually hand-wired and mounted based on the artist’s drawing of the work. Obviously geared towards an institution, the gallery did not disclose whether this third edition of the 1972 work had found a new home by fair’s end. Zwirner also presented several works by
James Welling
as part of the fair’s Beyond section, which focuses on large-scale installations. 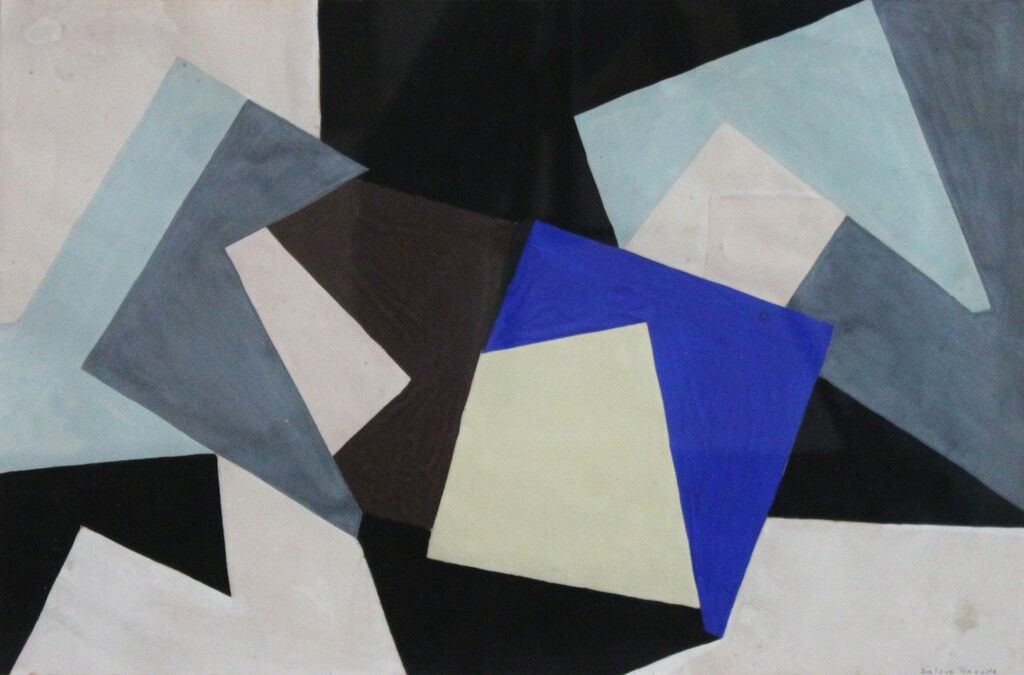 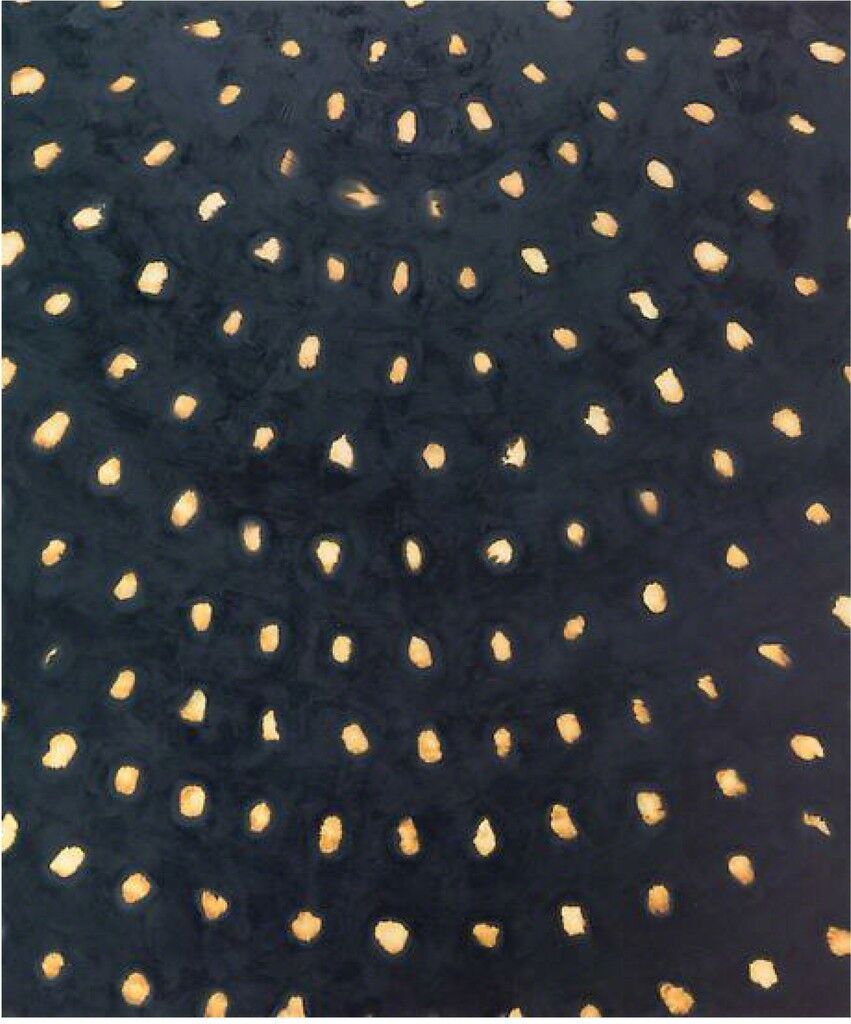 Ross Bleckner
Untitled, 2015
Leila Heller Gallery
Advertisement
Eight decades of Arab art were elegantly presented at Beirut’s Agial Gallery in a salon-style exhibition titled “Off Canvas,” which focused solely on works on paper by artists including Saloua Raouda Choucair, Ayman Baalbaki, Tagreed Darghouth, Ahmed Shibrain, and Georges Cyr. The gallery confirmed sales of between $8,000–42,000, with works headed to several members of the UAE royal family, regional collectors, and an unnamed institution.
Nearby at Leila Heller Gallery, which just inaugurated its Dubai outpost with exhibitions of Ghada Amer and Wim Delvoye, the floor was parqueted and the booth glowed in the golden works of Amer, Y.Z. Kami,
Charles Hossein Zenderoudi
, Hadieh Shafie, and Ross Bleckner. Sales ranged from $28,000 to six-figure sums, said the gallery’s Daniel Hamparsumyan, with Kami’s Golden Dome II selling “for $150,000 to a major Emirati collector.” Notably, the gallery also presented two (unsold) works by Lebanese modern master Paul Guiragossian, with whose estate the gallery will work. 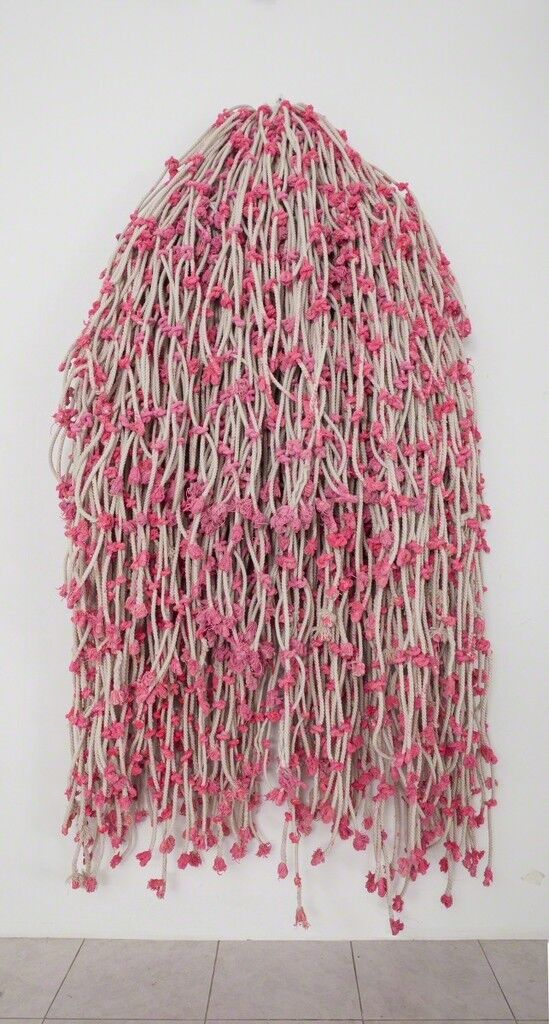 Hassan Sharif
Pink Knots, 2015
Gallery Isabelle van den Eynde
“It’s a very painterly booth,” said Isabelle van den Eynde of her eponymous Dubai gallery’s stand, located in Hall B. “Even Hassan Sharif’s rope work looks like an abstract painting.” Alongside that $65,000 piece was a $36,000 painting by the conceptual Emirati artist, hung facing a painting by Iranian artist Rokni Haerizadeh, priced at $48,000. Surprisingly, none of these stellar works found buyers, but the gallery did sell three works on paper by Haerizadeh to a collector from the region for between $5,500–7,000.
An impressive work on paper by Waqas Khan—the artist’s largest to date—dominated Galerie Krinzinger’s booth, where pieces by Marina Abramović, Alfred Tarazi, Maha Malluh, and Abdulnasser Gharem were also on offer. In addition to Khan’s meditative showstopper were Tarazi’s panoramas, each a roll of paper collaged and painted over by the Lebanese artist, which viewers can rotate via a knob on the work’s side. A two-panel version depicts members of the Lebanese Forces on the right and those of the Amal Movement on the left. “Here I present two sides of the same history that don’t reconcile," said Tarazi of the work. “You have to see where history meets.”
Elsewhere in Hall B, Hauser & Wirth, which has maintained a strong curatorial standard at Abu Dhabi Art over the years, sold a $55,000 work by
Djordje Ozbolt
to a UAE-based collector. It also sold
Bharti Kher
’s Antimatter (2015) for €120,000, as well as two ceramic sculptures by David Zink Yi. “We have been in constant dialogue with Louvre and Guggenheim curators,” said the gallery’s Florian Berktold.
Therein lies the primary reason why galleries participate in Abu Dhabi Art: to present and sell museum pieces. This may explain the increased number of works in the fair’s Beyond section. Such acquisition decisions naturally take time, and in the UAE capital’s art fair, many say the finissage is more important than the vernissage. “We are still in discussion on some pieces,” said Berktold—a sentiment echoed by many.
—Myrna Ayad
Explore Abu Dhabi Art on Artsy.
Related Stories