The Underground Russian Artists Who Evaded the KGB 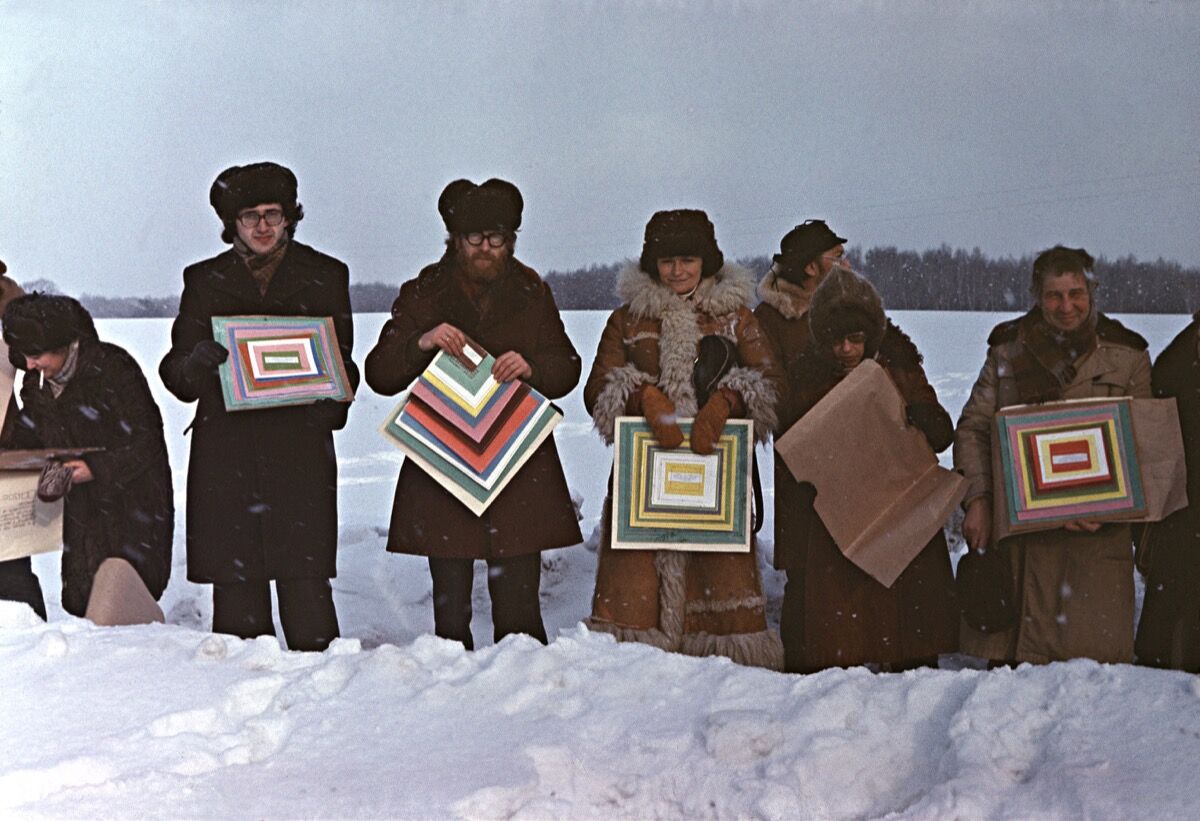 The story of Russian conceptual art doesn’t unfurl in galleries or art schools, but at the wild apartment parties and unsanctioned collective spaces that peppered the capital city in the late 20th century.
The Soviet strain of conceptualism is largely thought to have begun in the early 1980s, nearly 20 years after the trend flourished in Western Europe. But Moscow’s approach to conceptual art was not a scion of the West; it was an entirely different beast whose focus was less about heady poststructural linguistics and more about responding to what the artists perceived to be an absence of utopian aspiration in late-communist Russia. It was a wholly avant-garde movement, propagated by ad hoc artist collectives who subtly pushed the boundaries of Soviet-mandated aesthetics.
The movement would provide the basis for Russian conceptual art’s most famous figures to emerge, such as
Ilya and Emilia Kabakov
, the artist couple whose intricate installations will be on view in their solo exhibition, “Not Everyone Will Be Taken Into the Future,” at the Tate Modern next week.
Artistic freedoms were highly suspect at the height of the Cold War. In 1962, Soviet premier Nikita Khrushchev became outraged during a visit to the Union of Artists at the Manezh Gallery in Moscow, where abstract, non-figurative art was on display. “Dog shit,” he called it. “Private psycho-pathological distortions of the public conscience.” He quickly created strict guidelines to limit the presentation of such art, effectively leading to the formation of two separate art worlds in Russia: one that adhered to the Soviet Union’s “official” aesthetic of
Socialist Realism
and one composed of underground artists who practiced an absolute freedom of expression. 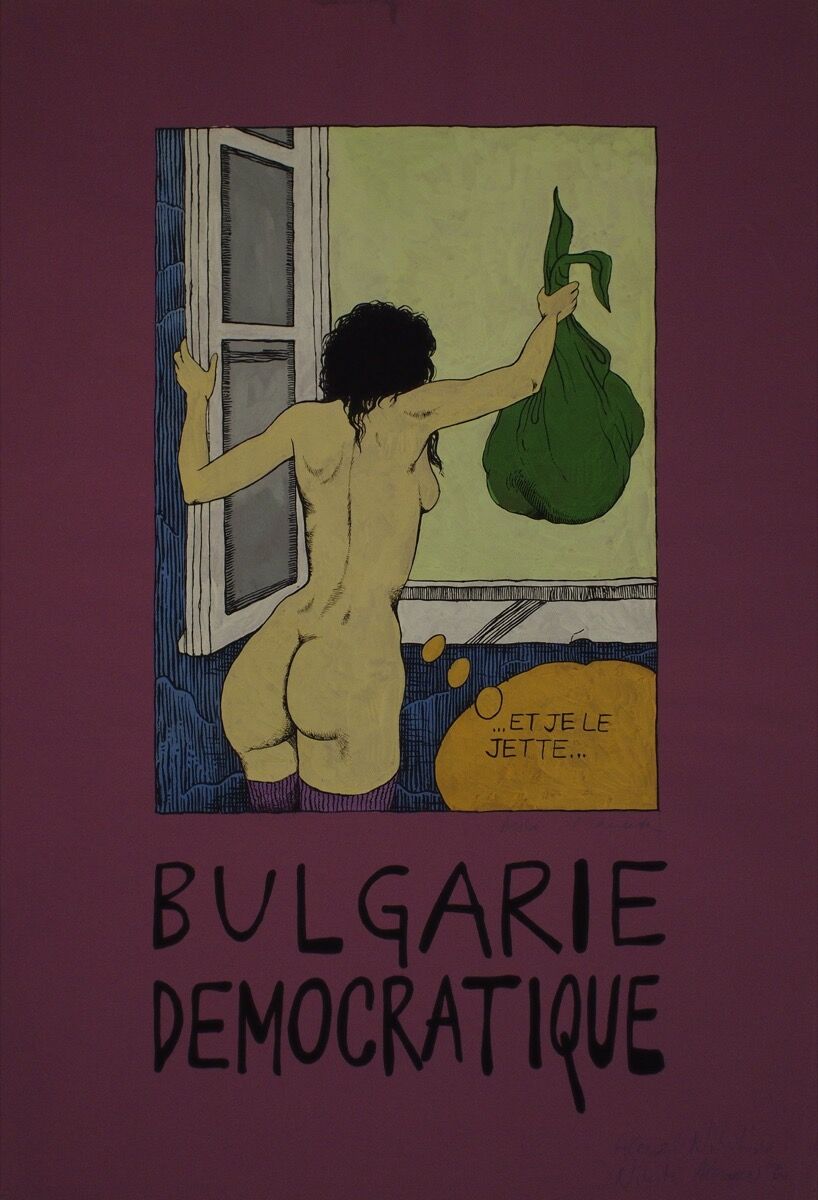 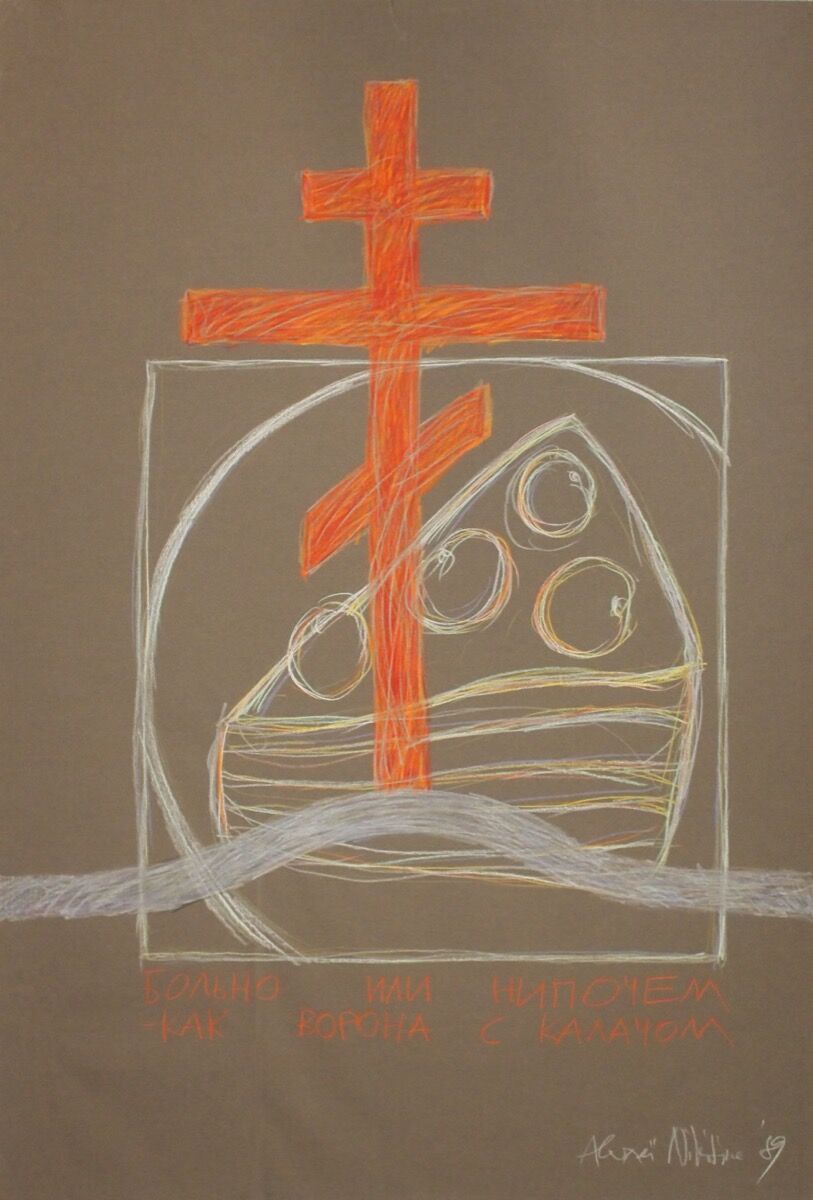 What Khrushchev apparently did not account for is the reality underlying much of art history: Creativity is often strongest when under threat. Instead of abandoning emerging conceptual practices, artists joined shadow unions and participated in clandestine apartment exhibitions. In 1976, just over a decade after the premier’s outburst,
Nikita Alexeev
,
Georgy Kiesewalter
,
Andrei Monastyrski
, and Nikolai Panitkov created the Collective Actions Group (CAG). Though the artists often reified Soviet ideology—creating performances and installations that promoted the virtues of communal action—they also explored questions of individual subjectivity.
And for the CAG, ideas of communalism and individualism need not be incompatible, as they would illustrate in their first major performance piece, Appearance (1976). Begun in Izmailovsky Field just outside of Moscow’s city center, the piece gathered together a small group of 30 viewer-participants, who assembled in the snow-covered park, waiting for Lev Rubinstein and Alexeev to arrive from the opposite sides of the field. Once the two artists materialized at the group’s meeting point, they had the group sign a testimony that they were present. The very acts of witnessing, documenting, and archiving thus became conceptual material for the group.
As a small act of rebellion, artists had gathered to create unsanctioned art—and had dared to testify to its creation. Yet, one could easily overstate the group’s political insubordination. Conceptual art in Moscow took root in a generation of artists who had only ever lived under Stalinism and Soviet control. Their aims were not necessarily to democratize Russia, but to democratize artistic production outside of the hierarchical system installed by Khrushchev—and to ask, how do we live in our existing social conditions? How does art evolve under and outside of Soviet doctrine?
Eventually, Alexeev left the Collective Actions Group to start his own impromptu collective, APTART. Organizing a series of exhibitions and performances inside the private homes of a trust circle of friends, Alexeev spread the influence of Moscow Conceptualism into new mediums beyond performance. And while he served as the group’s gatekeeper, he placed no restrictions on what art could be exhibited. These so-called “anti-shows” became known as covert, anarchic gatherings, energetic expressions of angst made for the public in the absence of a public sphere. 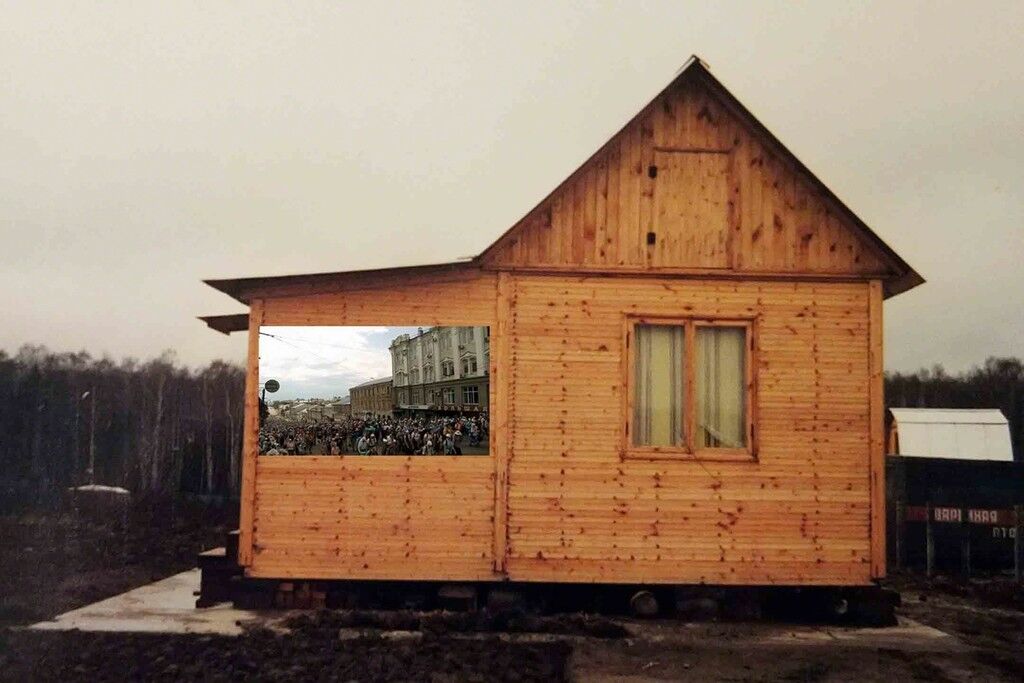 Andrei Monastyrski
untitled
Charim Galerie
Advertisement
At a recent talk organized by Whitechapel Gallery in London, Alexeev reflected on APTART as an “orgy in limited space,” one that drew the attention of KGB agents, Russia’s secret police, who monitored the collective’s actions, accusing them of spreading homosexuality and other “improper” attitudes through nude performance art and photography.
(Nothing terribly serious ever transpired between the KGB agents and APTART artists, but the government would occasionally confiscate art and ephemera from the group as punishment for insubordination. And although the KGB is long gone, many Moscow Conceptualists still cannot access the confiscated art held within the former organization’s archive. Allegedly, the archive tells these artists that their works have been “lost.”)
Alexeev and the APTART artists illustrate the degree to which “unofficial” artists in the USSR were restricted to private, enclosed spaces. Apartment performances were explosive powder kegs, begging to find a larger audience. Perhaps it was this sense of claustrophobia that catalyzed the large, immersive installations that the Kabakovs would make later in their careers, following the years that Ilya spent making paintings and sculptures as an “unofficial” artist working in his Moscow studio in the 1960s and ’70s. After all, Ilya’s The Man Who Flew into Space from His Apartment (1985) explicitly deals with this tension between confinement and exploration.
Having moved to New York in the late ’80s, the Kabakovs deal in flights of fancy that escape the alienation they felt in Russia. “We wanted to analyze the language of Soviet civilization,” Ilya once commented. “The banal, everyday language of the system…we felt like observers in our own country, like ethnologists…we ourselves were members of a different club than that of everyday Soviet life, but we were also part of that.”
Ilya’s breakthrough work, Ten Characters (1970–74), also examined the desire to escape. Composed of a combination of performance, illustration, and literature, the piece synthesizes Russian literary archetypes and the country’s rich artistic history. When first presented in the artist’s studio as a sparse installation, Ilya would perform one of 10 fictional characters, each with narrative featuring some variance of a “small man, possessed by big ideas”—an obvious reference to Communist ideology.
This small man desired to flee the conditions of his life, to fly out of his apartment and into the cosmos. Here, the individual fantasy of escape consumes the Soviet dream of a communal utopianism. 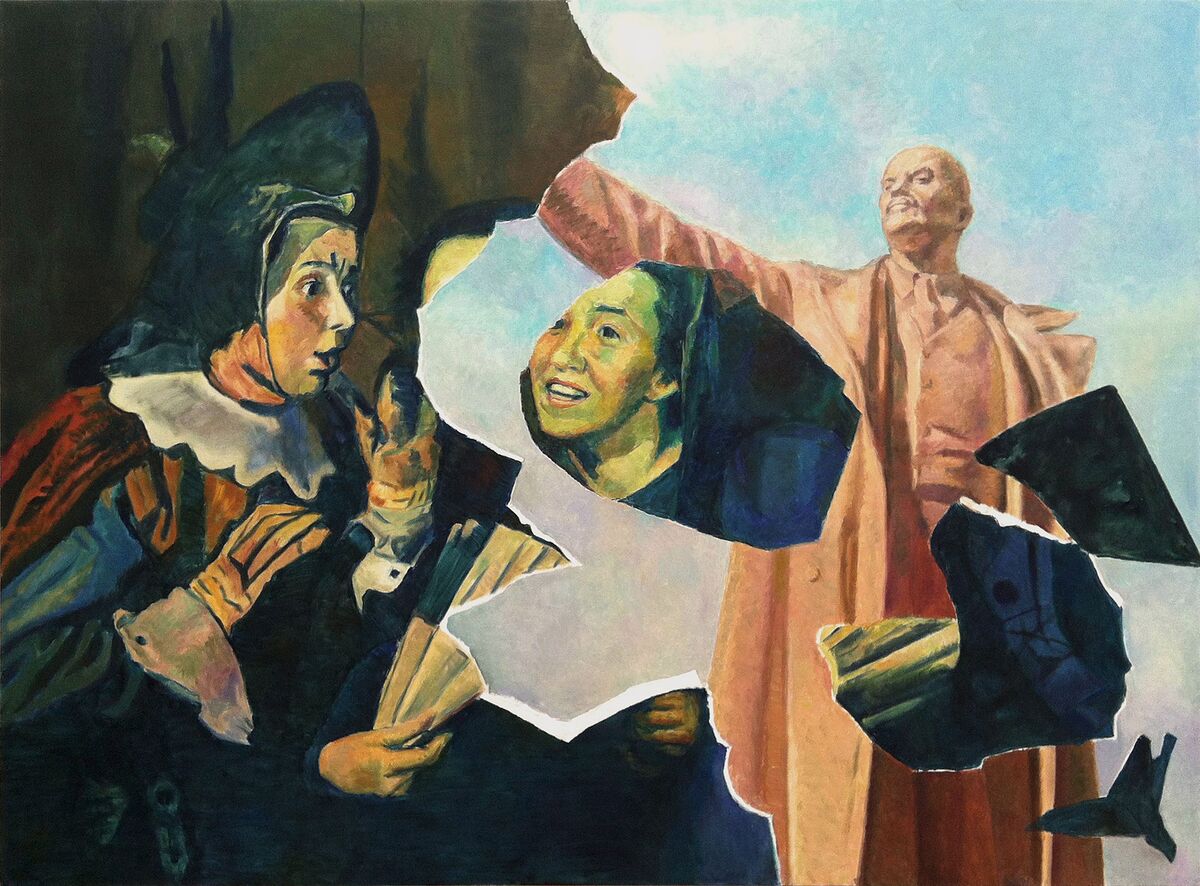 Like Alexeev, APTART, and the Collective Actions Group, the Kabakovs also grappled with ideas of collective memory. Ilya’s The Man Who Never Threw Anything Away (1988), for instance, an installation based on an invented narrative about a character who hoards objects, hypothesizes that yesterday’s trash can be a signpost toward the future. What if we forget nothing and drag everything with us?
“A dump not only devours everything, preserving it forever,” writes Ilya as the narrative’s titular character. “But one might say that it also continually generates something: this is where some kinds of shoots come from new projects, ideas, a certain enthusiasm arises, hopes for the rebirth of something, though it is well-known that all of this will be covered with new layers of garbage.”
The pessimism of Kabakov’s writing belies the fact that he and Emilia, like other Moscow conceptualists, were engaged in a project of trying to make something out of nothing—to make something completely new from a stymied history of artistic expression. If the future is born from the past, it may be predestined trash, but it also has the potential to be recycled, rebuilt, rejected, and renewed again.
Zachary Small
Related Stories