Understanding 11 Great Artists through the Instructions They Left Behind Art has the power to mystify. You’ve experienced it if you’ve ever walked up to an artwork, stopped, and thought, “How did they do that?” Such an encounter can leave you wishing for the artist’s instructions on how the artwork was planned out, fabricated, or performed. Actually, those instructions exist, and some are even considered artworks in their own right.
“Instruction drawings,” as they’ve been called, are preparatory sketches and notes; they might even be the sole remnants of a work that an artist dreamt up, but never realized. Earlier this year, the Museum of Modern Art received a gift of 800 works from the Gilbert B. and Lila Silverman Instruction Drawing Collection, including a preparatory drawing for
Roy Lichtenstein
’s sculpture Head of Girl (1964), plans for
Carolee Schneemann
’s iconic performance Meat Joy (1964), and diagrams outlining how
Donald Judd
’s stacks and
Robert Rauschenberg
’s white paintings should be created. Though they’re not exactly formulas to understanding artists’ genius feats, they do offer clues into the artist’s mind.
“They really bring you back to the studio—the making of the work,” noted Christophe Cherix, MoMA’s chief curator of drawings and prints. “And that’s why they are both so moving and informative: They bring you to a place where usually you’re not allowed, to that moment where the work is really imagined.” We recently caught up with Cherix to discuss 11 choice works from the Silverman Collection, and what these instructions can tell us about the artists who penned them. 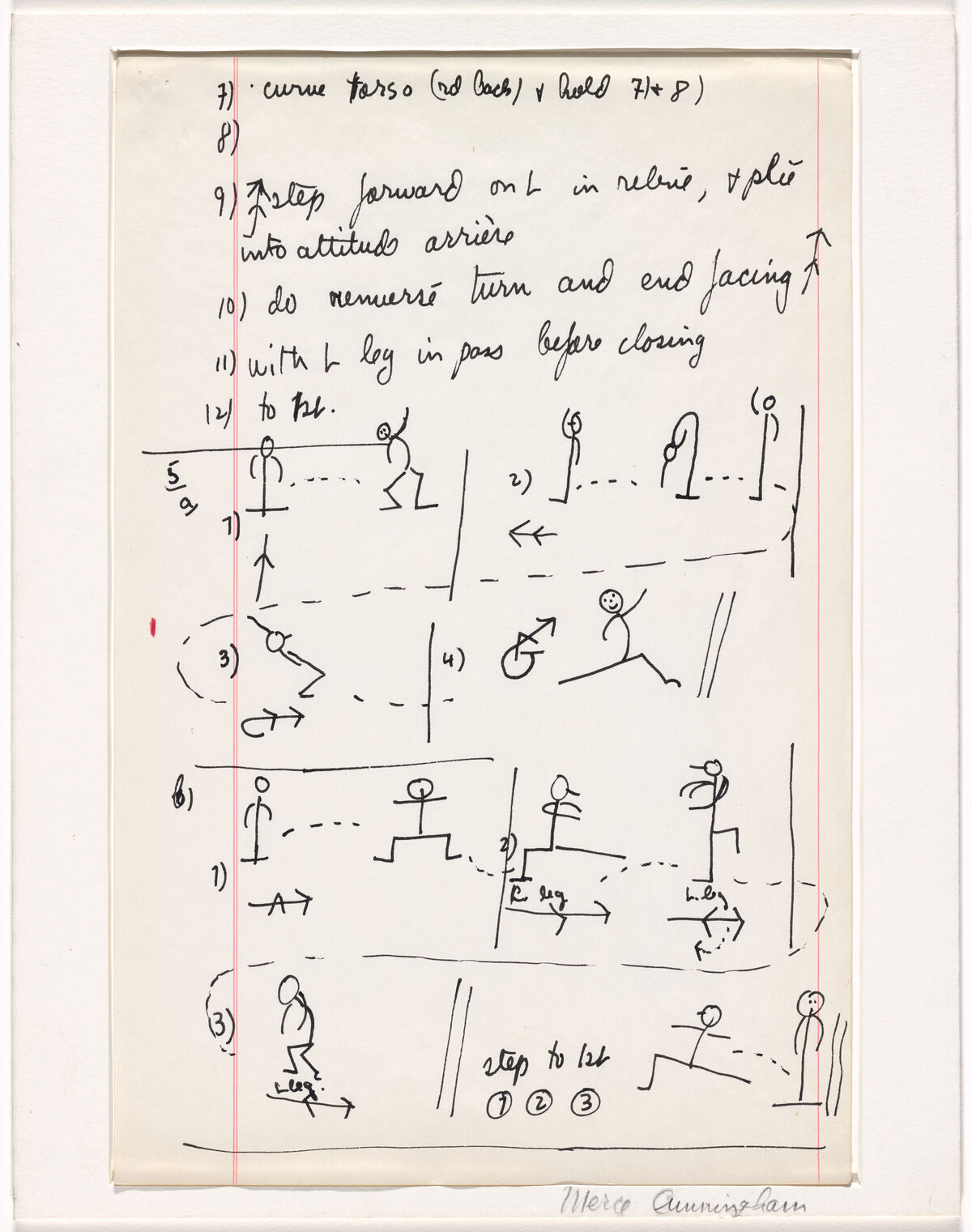 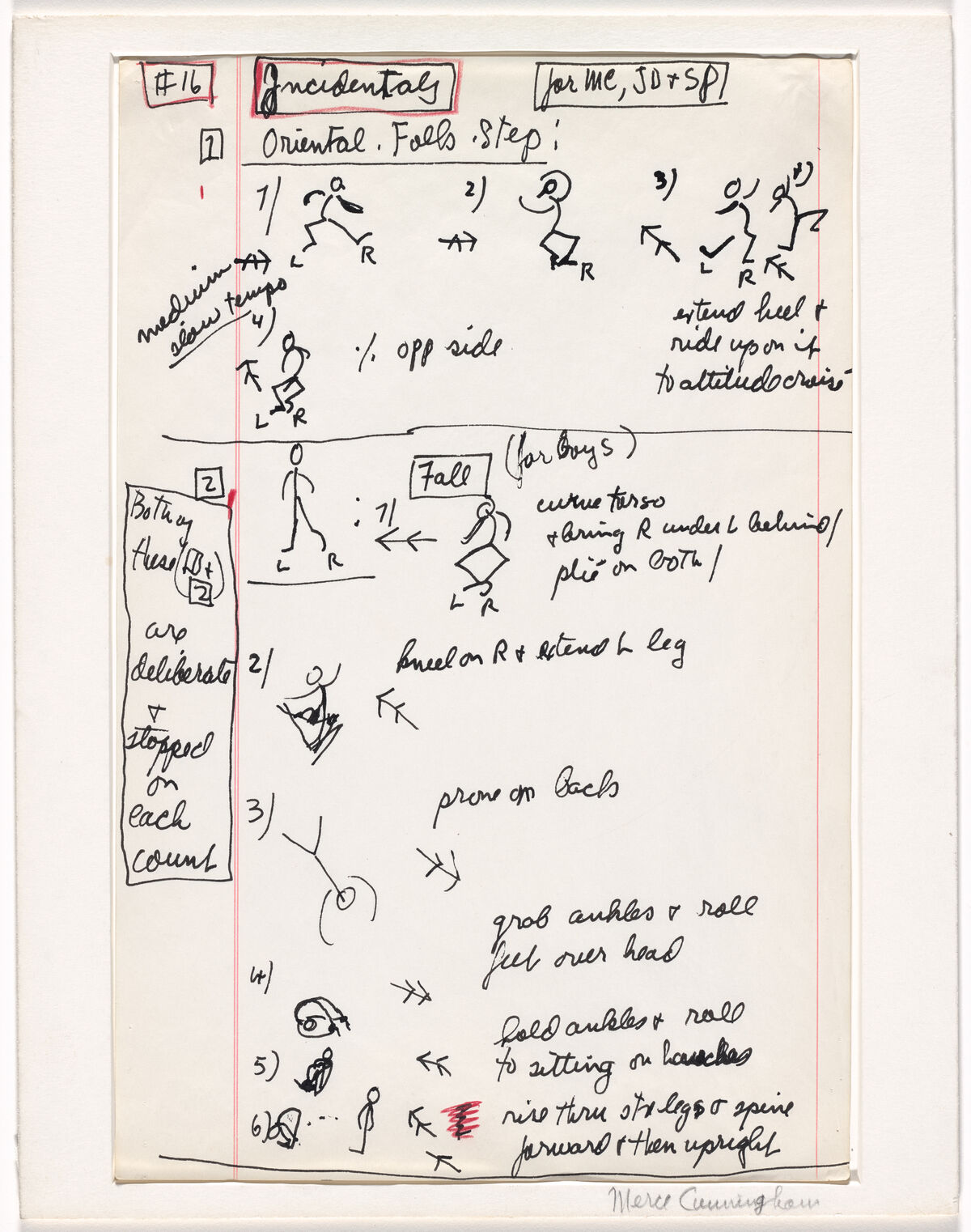 Pioneering modern dance choreographer
Merce Cunningham
sketched out three pages of notes for his early 1960s dance Aeon, for which
John Cage
composed the score and Robert Rauschenberg designed the sets.
“The sheets are very precious because dance was in a very experimental moment, and often involved improvisation,” Cherix explained. The pages show the choreographer’s loopy scrawl, stick-figure drawings, and arrows—indicating the directives he gave to dancers, including specific, key movements such as “grab ankles & roll feet over head.” The pages offer a view into Cunningham’s careful creative process and the way he developed his works through lists, words, visual cues, and space. Advertisement
Known for highly calculated installations that engage the Earth and precise manmade objects,
Walter De Maria
created this drawing early in his career, before he’d broached the vast terrain of
land art
. While it doesn’t refer to any single finished work, the drawing illustrates the minimal convenings with nature that the artist was imagining at the time. Its title references another luminary of the 1960s avant-garde, the minimalist composer
La Monte Young
; Cherix noted that the drawing recalls Young’s famous adage from his Compositions 1960: “Draw a straight line and follow it.” A simple, mountainous landscape with a path drawn through it, the piece reflects the artist’s desire to make large-scale works in nature. What may appear to be a few pencil markings on a magazine clipping is actually a window into Roy Lichtenstein’s process for planning out his sculptures. The artist may be more recognized for his comic book–like paintings, but he also made a handful of metal sculptures in his signature style: benday dots and primary colors portraying scenes from everyday life. This particular drawing shows the early stages of two sculptures, completed in 1964 and 1965 (one of which belongs to the Whitney).
Lichtenstein said that he wasn’t copying his source material, but rather “restating the image that he found, in his own terms,” Cherix explained. “What you see is a two-dimensional image of a girl that would become, in his own terms, a sculpture.” The pencil markings show the key shapes that the artist focused on in conceiving the piece.
“After seeing that, you can’t see the sculpture the same way,” Cherix remarked. “That’s why these instructional drawings are so interesting—they allow us to enter the thought process, and then they challenge us to reconsider things that we think we know well.” 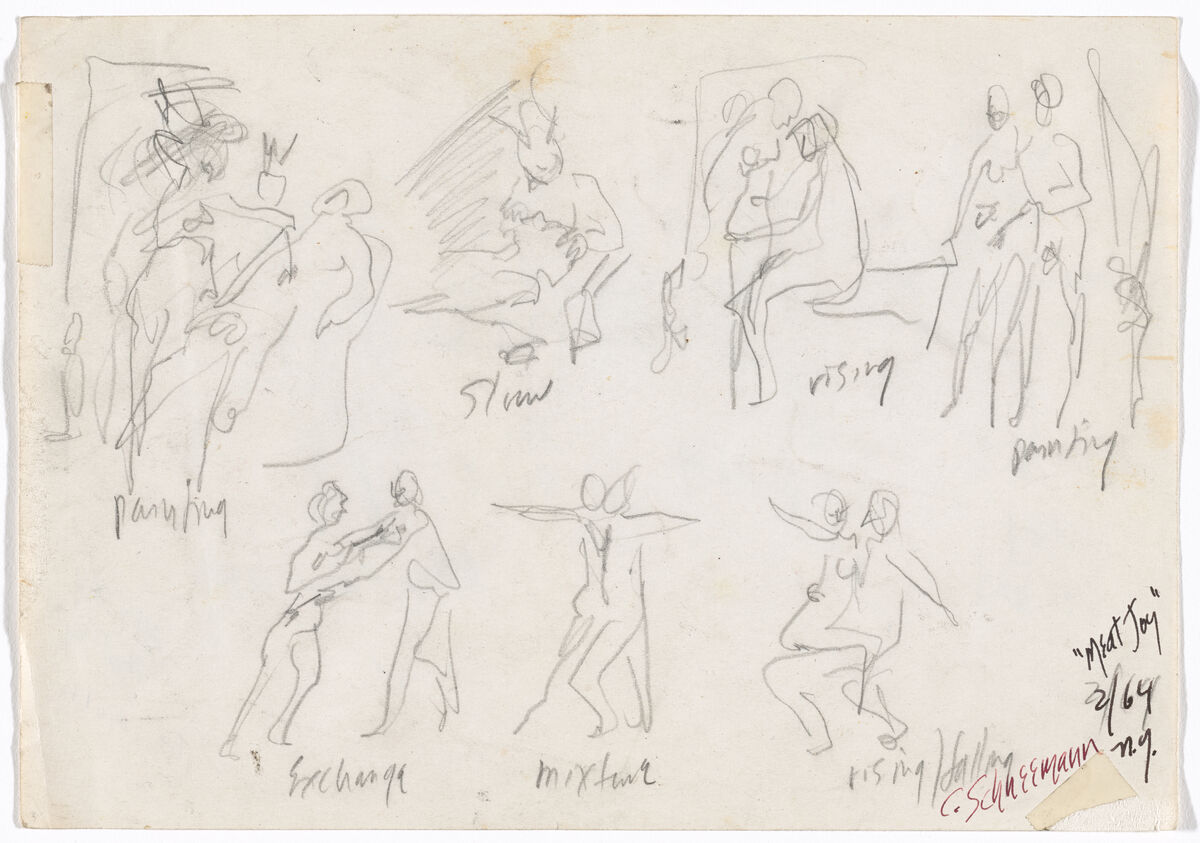 This detailed sketch depicts plans for Carolee Schneemann’s iconic performance piece Meat Joy. In this case, the instruction drawing documents “something that happened just a few times and was not meant to be reenacted over and over,” Cherix said.
While we have footage of Schneemann’s live performance—which featured half-naked men and women writhing around with slabs of raw meat, fish, whole chickens, and paint—this drawing reminds us that it was not quite so free-wheeling as it appeared. Moreover, Cherix added, the drawing “tells you a little bit of how she arrived at Meat Joy, which is maybe one of her most famous works.” Indeed, the sketch portrays entangled couples with notes like “mixture,” “exchange,” and “rising/falling.” This drawing and an accompanying letter encapsulate one of Rauschenberg’s many novel ideas: to produce plain white paintings that he never even touched. These works, known as the “White Paintings,” were meant to act as screens on a stage—“a painting that was less to be looked at and more to react to its environment,” Cherix offered. As the instructions make clear, the artist was emphatic that these works should not look handmade; he didn’t want to see brushstrokes, instead preferring “smooth (not grainy or rough) canvas stretched tight and painted evenly flat white.” Additionally, as he made clear through diagrams at the top of the drawing, these pieces could made in a variety of configurations—such as one 4-foot square or two rectangular panels—so long as they adhered to his specific rules and dimensions.
“What this sheet preserved is really the fundamental instruction for the making of paintings that completely changed the way we looked at painting in the post-war,” Cherix said. “The painting can be delegated; it can be just something that exists in relation to the world around it, not a thing in and of itself.” 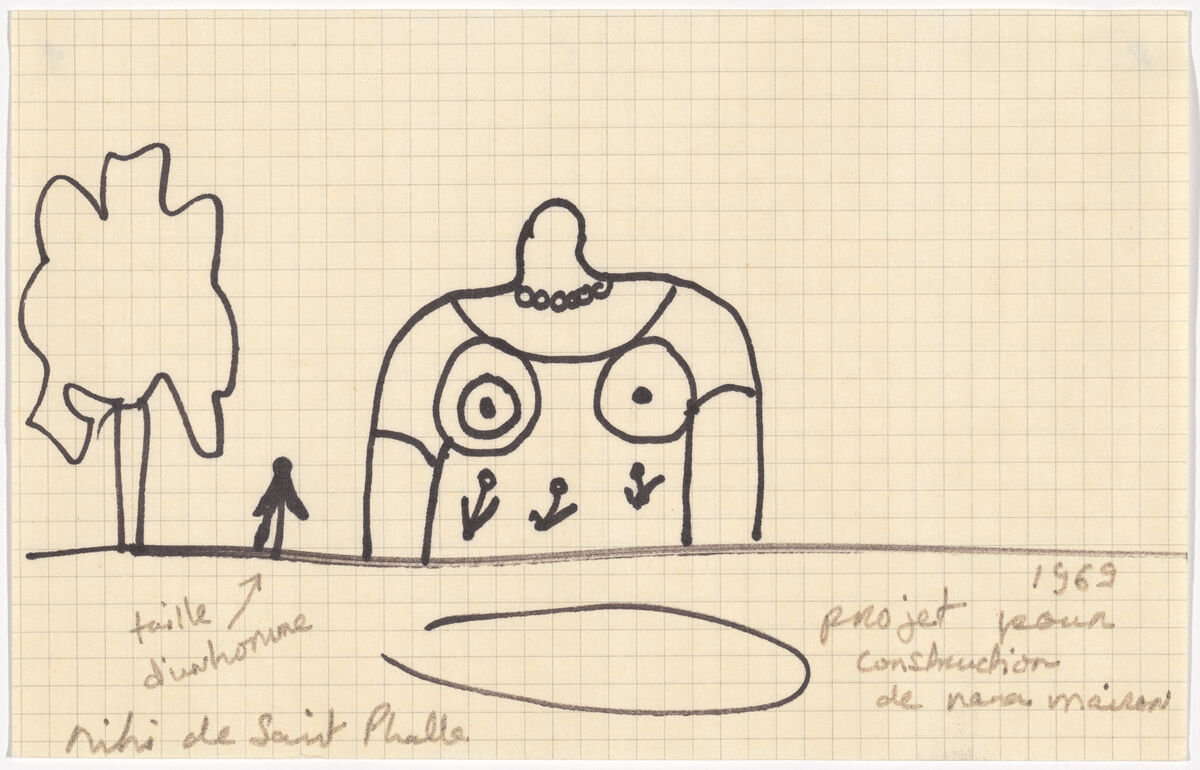 The French sculptor
Niki de Saint Phalle
made many sculptures that took on the character of the “Nana”—a colloquial term for women that she playfully used to make feminist statements and toy with conceptions surrounding women’s societal roles. This plan for a “Nana” the size of a small home, a commentary on housewives, also exemplifies her great feats in monumental sculpture—something that few women had opportunities to accomplish in the 20th century. (In 1998, Saint Phalle opened her Tarot Garden, a sculpture park in Tuscany filled with several brilliant, towering “Nana” figures.)
“Her work addresses different stereotypes of women and creates environments that are inviting but also very critical,” Cherix noted. “It shows her ambition.…She didn’t want to keep creating painting and sculpture, small objects, domestic objects; and was really trying to tackle the scale of public space.” 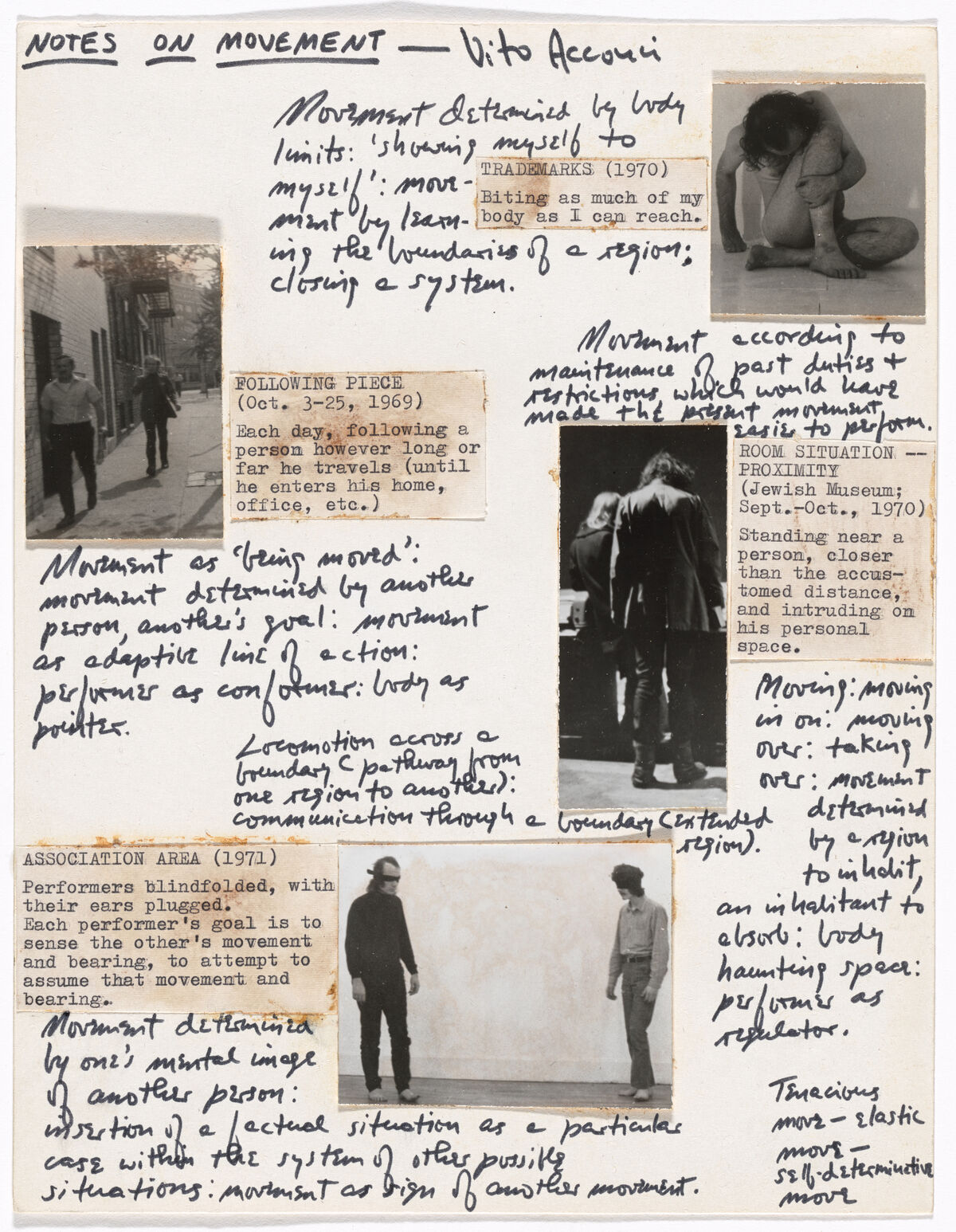 This compendium of works by
Vito Acconci
documents the artist’s idiosyncratic performances from 1961–71, while also shedding light on how he thought about his movement within the conceptual framework of his pieces.
“Acconci had a very interesting way of showing photographs of his actual performances, often with texts, which bring you to the moment when the work was performed, but also to the idea behind the performance,” Cherix said. For Following Piece (1969), where the artist chose a stranger to tail until he or she went home or to work, he considered his movement “determined by another person, another’s goal.” In contrast, for Trademarks (1970), where the artist bit “as much of [his] body as [he could] reach,” Cherix said, Acconci’s movement was dictated by his own physical limits. In the 1960s, “Judd was one of the first artists to delegate the production of his work as a sculptor,” Cherix explained. But that doesn’t mean he wasn’t involved in the creation of his works. “Judd would follow the execution of the work very, very precisely. He was really behind the shoulder of the person fabricating,” Cherix continued. But even so, Judd also recorded the specifications of each piece, as seen in this drawing for one of his signature “stack” wall sculptures, made for his fabricators at the time, the Bernstein Brothers. The artist included notes on the materials of the piece—“Sides and front are Galvanized iron. Top and bottom are blue anodized aluminum”—and the dimensions of each individual module, but he also sketched out the whole piece to show how it fit the space where it hung.
“The relationship to the actual space, to the architecture, was a defining element of a work of art for him,” Cherix added.

Kase2, The Fantastic Partners (not dated) Kase2 (Jeff Brown), The Fantastic Partners. Courtesy of the Museum of Modern Art.

Bronx-born graffiti artist Jeff Brown, a.k.a. Kase2, was known for tagging subway cars in 1970s New York. This marker drawing, titled after the collective he belonged to, The Fantastic Partners (or TFP Crew), was used to plan one such piece.
Kase2 and his peers “were taking the city as a canvas and doing things that were mostly illegal—you were not supposed to paint the subway cars or do great frescoes on empty walls across the city,” Cherix noted. Before acquiring the drawing, Gilbert B. Silverman looked at those murals and wondered how graffiti artists were able to execute such detailed, elaborate work; that led him to seek out pieces like this one.
“Of course, it’s very hard to collect a subway car, and most of those interventions have disappeared,” Cherix added. While some of the works still exist through photographs and maybe even fragments, Cherix said that “this is a very nice way to bring these works into our collection, to have the works on paper that really helped the artist to make their work in the city itself.”
Casey Lesser is Artsy’s Lead Editor, Contemporary Art and Creativity.
Related Stories