Alina Cohen
May 14, 2018 5:26pm
Sculptor
Charles Ray
employs varied media—from ink to marble, photography to wood—to depict anything from a car wreck to clothing or a human figure. Indeed, it can be difficult for both newcomers and studied critics to describe just what exactly defines his oeuvre. If anything, it’s always an inventive meditation on sculpture itself.
Ray’s wry poetry extends across the body of work he’s made since the 1970s, when he studied at the University of Iowa (he later attended Rutgers University for graduate school). Born in Chicago in 1953 and now based in Los Angeles, the artist is better known for taking early morning hikes and building his own boats than he is for making appearances at major art world events.
While he’s chosen to live outside the limelight, major institutions still avidly promote his work. The Whitney Museum of American Art has featured him in its biennials five times. A 2015 retrospective at the Art Institute of Chicago introduced fresh eyes to his labor-intensive pieces, including an oversized sculpture, Huck and Jim (2014), which depicted the protagonists of Mark Twain’s most famous novel in the nude. At the moment, Matthew Marks Gallery in New York is showing five new works by the artist in “three rooms and the repair annex,” including a massive steel nude and two painted steel sculptures of tiny mechanics.
Ray’s own body has often figured prominently in his practice—he’s photographed and sculpted himself, including most memorably in a 1992 piece, Oh! Charley, Charley, Charley…, which features eight onanistic sculptural approximations of the artist. Ray’s output is small, as it can take years to complete a single work. Some pieces can be relatively simple, like Ink Line (1987), where a steady stream of ink flows from the gallery ceiling onto its floor, daring viewers to reach out and touch it. Others—such as Unpainted Sculpture (1997), a sculpture of a bashed-up four-door sedan—require a wealth of planning and expertise. Here are a few other highlights from the sculptor’s preeminent contribution to contemporary art.

Charles Ray
All My Clothes, 1973
Phillips
“The interesting thing is the repeating of the blue jeans,” Ray tells Artsy about this early work from his college days: a linear photographic series in which the artist wears different configurations of all the clothes he owns. “I had more shirts than I had pants.” The serial aspect, he says, is particular to the era. According to him, the work’s “documentary nature,” along with the fact that the figures are lined up in a row, gives the piece away as a product of its decade (conceptual photography projects of the time often had a serial nature, as in the work of
Robert Kinmont
). Additionally, Ray produced the work at a time when images of young men lining up in a row were common: The draft for the Vietnam War finally ended in 1973, its legacy preserved in pictures of youthful soldiers standing side-by-side in much more formal, mandatory dress. 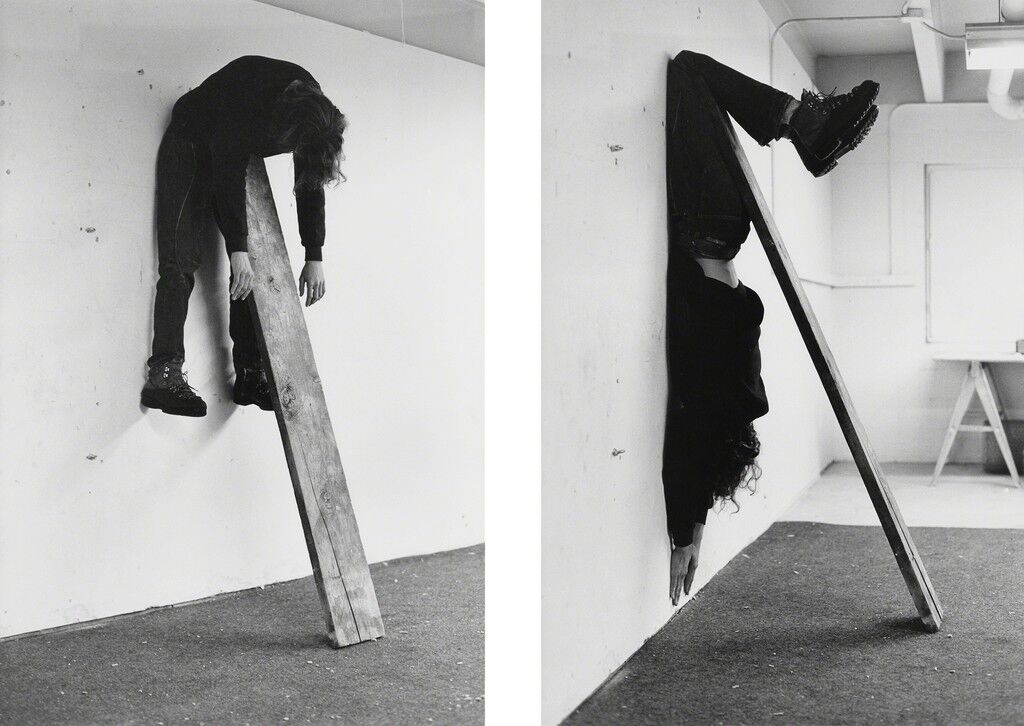 Charles Ray
Plank Piece I–II, 1973
Gagosian
Advertisement
Throughout college, Ray made sculptures with heavy materials, such as sacks of cement and stone blocks. “My body was always present in the activity of the studio,” he says. “What was important to me, looking back now, was how close at hand my body always was.” He’d lie in his bathtub, considering how his own body itself might become part of one of his pieces. In this diptych, Ray captured performances in which a wooden plank fixed him to the wall, first by the backs of his knees, and then by his midsection. When he was young, he denied empathetic readings of Plank Piece I-II that considered how painful it must have been to pin his body to the wall. He used to tell people that it was much more impersonal, merely “a relationship between a wall, a plank, and a body. I was very dry about it.” Ray is less dogmatic about the work now. Indeed, Plank Piece I-II can read as embodied artistic strife: a creator becoming overwhelmed and dominated by his material. 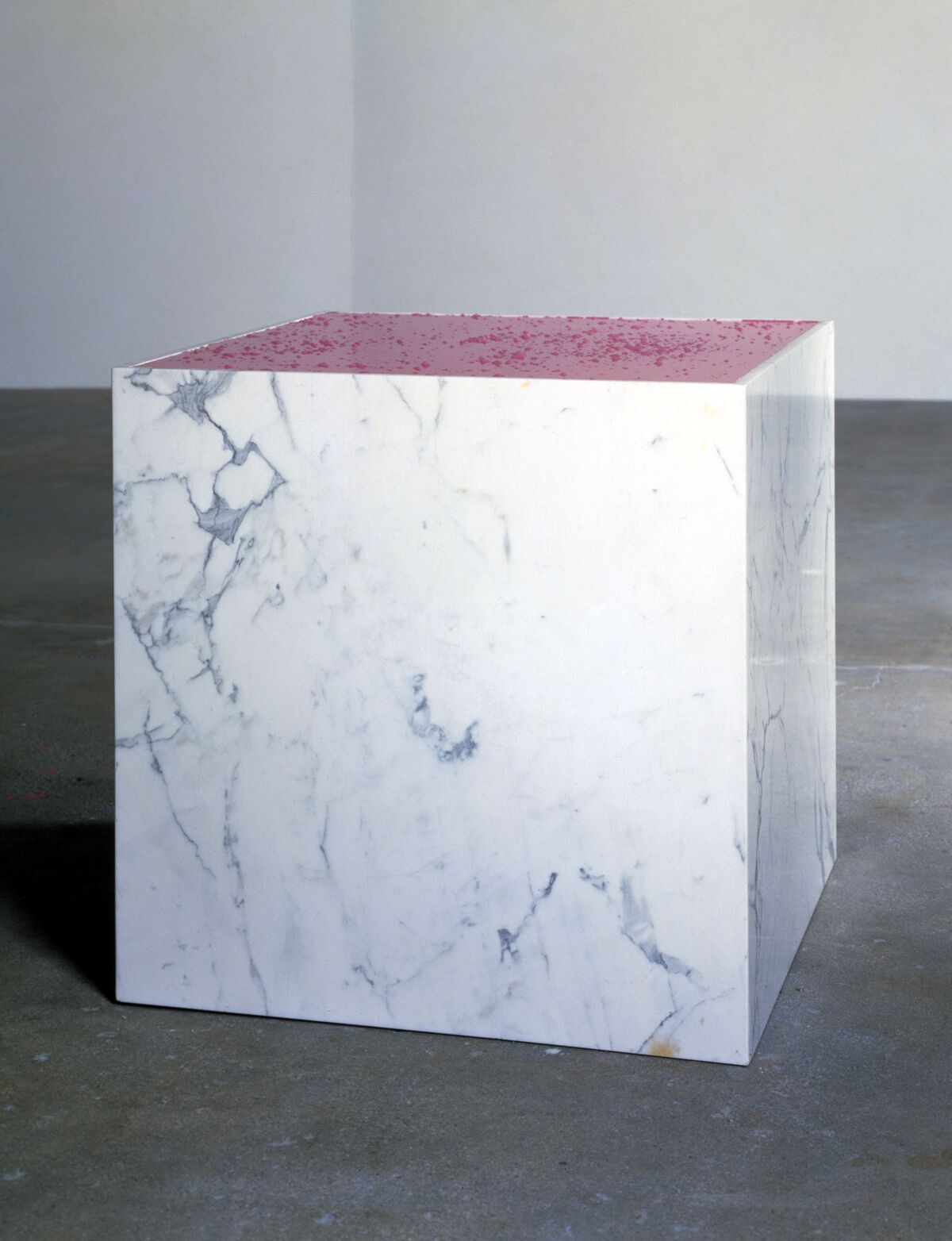 This sculpture is quite literally what its title implies. Artist
Mike Kelley
once wrote that the work “seems to conflate minimalist sculpture and the vomitoriums of ancient Roman arenas.” Kelley focused on the rarity of the color pink in contemporary work; in his mind, Ray’s brightly hued sculpture implies a perversity, and an unmasking of the art world’s “masculine orientation.” Ray offers a more prosaic story. “I think one season there was a bad flu around,” he says, simply. “Marble was ubiquitous at the time: in counters, bathrooms, and stalls. Pepto-Bismol is a popular cure for nausea—and the sculpture, that volume of [the medicine], kind of causes nausea.” Is there an irony that something that was supposed to cure nausea would then induce it? According to Ray, if that’s the case, then the piece failed: He wants his sculpture to transcend irony. In all his work, he aims for what he terms “sculpturalness” to surpass any literal reading that would too easily allow a viewer to derive a clear, one-note message from a piece. The meaning, he says, should simply derive from the sculpture itself. “The poetry I’m creating is sculptural rather than verbal,” he explains. 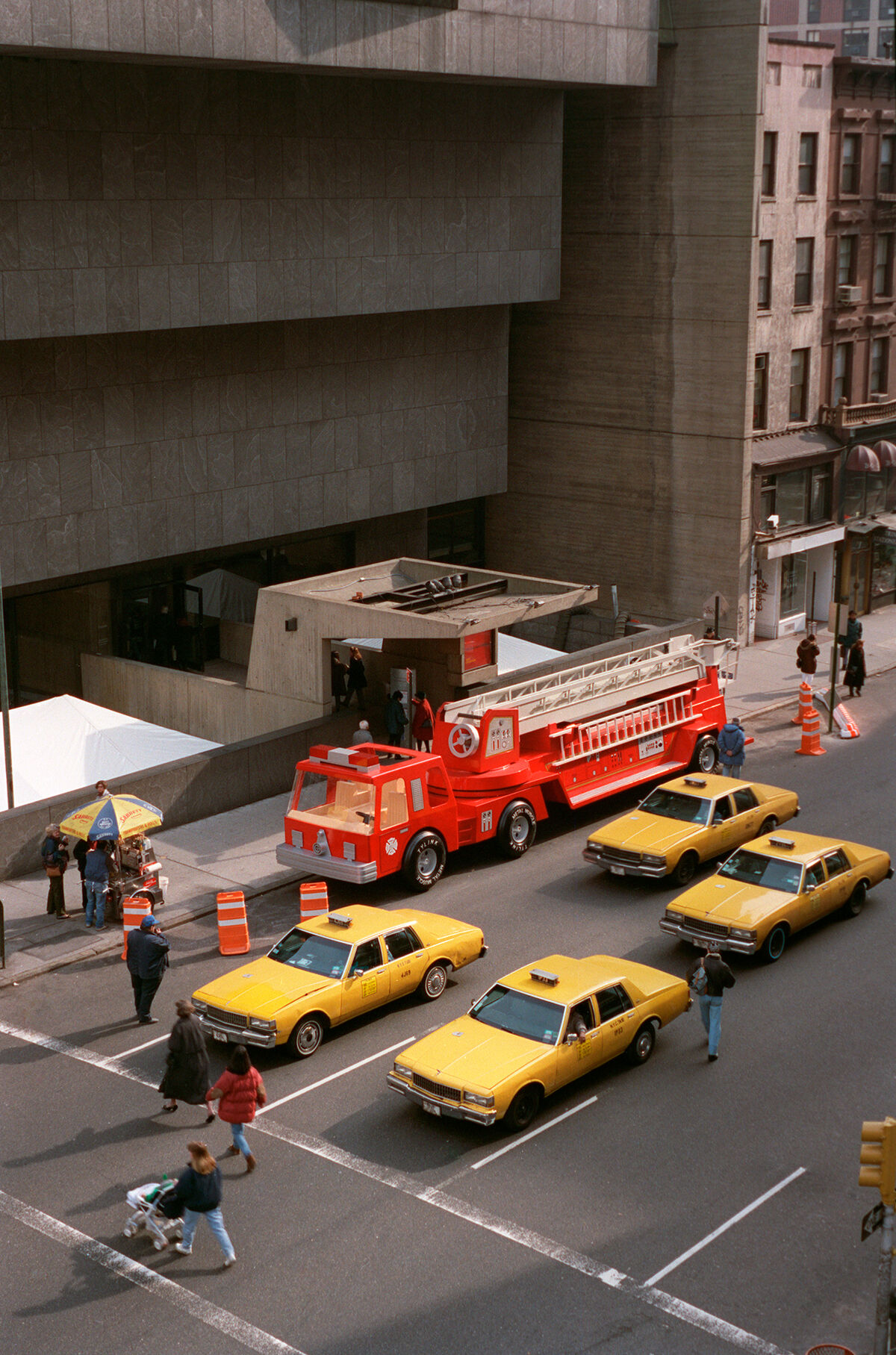 This 12-by-46.5-by-8-foot replica of a toy fire truck, made from painted aluminum, fiberglass, and plexiglass, turns a child’s plaything into life-sized artifice (and art). Ray has generally chosen to park the sculpture out in front of museums, such as the Los Angeles County Museum of Art and the Whitney, where the sculpture’s presence begs the question—where’s the fire? No matter what kind of metaphorical blaze the truck could potentially put out, it’s incapable of doing anything besides sitting on the street: After all, it’s just a sculpture (and modeled off a toy, no less,branded “Tylink” with the words “Metal Muscle” across its wheels). The work evokes all the action that would attend a real fire truck’s arrival on-site, while reveling in its own inefficacy. These considerations bring the viewer back to a central question within Ray’s work: What can sculpture actually do? Ray isn’t a fan of Freudian, psychological readings of his work. Yet eying this painted-fiberglass and synthetic hair sculpture of four naked family members at disconcerting scale—the children enlarged and the adults shrunk, so that everyone stands at roughly the same height—it’s difficult not to consider what kind of complexes an analyst might ascribe to the whole thing. With hands clasped, the figures form a familial barricade; the viewer can only walk around the quartet, which turns them into a single, impenetrable system (which is kind of how contemporary post-Freudian therapists think about families anyway). 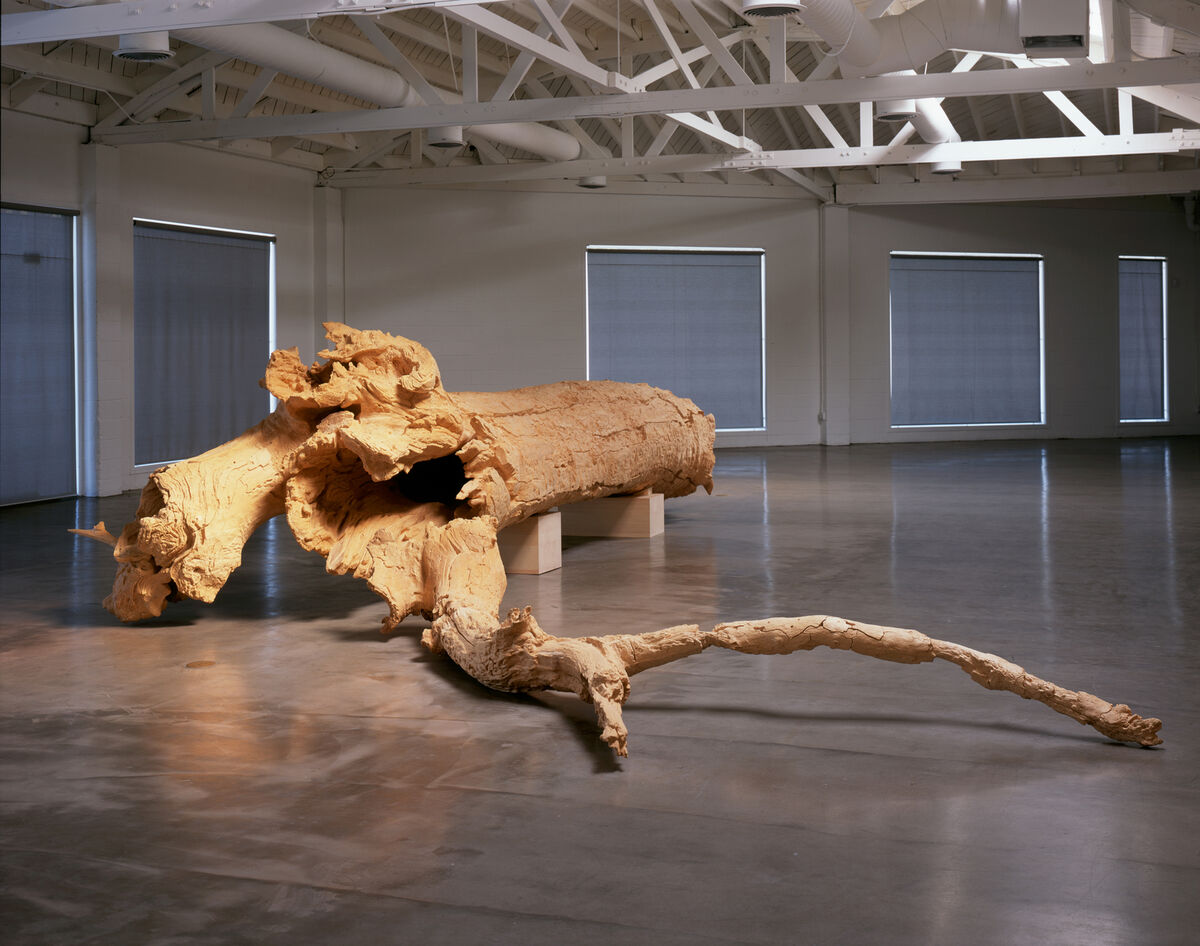 This sculpture of a giant, fallen tree, when situated within a gallery space, evokes both the natural world’s destruction and art’s preservative powers. The piece began with a dead oak tree that Ray spotted while driving along California’s central coast. Ray retrieved it in order to cast its form in silicone and fiberglass. He then employed woodworkers in Japan to carve a replica from a Japanese cypress, or hinoki tree. After 400 years, it’ll decay—sharply at first, and then more gradually. The final work, then, is two layers removed from its original source material. Ray, whose casts were doubtless impacted by his own emotional response to the object, allowed a disinterested party on the other side of the world to render the final piece. (Plenty of sculptors use fabricators, but the coldness of, say, a
Jeff Koons
balloon dog or a
Donald Judd
box is replaced here with something warmer and earthier.) For millennia, philosophers have wrestled with the idea of “tree-ness,” or just what constitutes the “form” of a tree. Ray’s art—sculpture about sculpture (and, in this case, about life and death, too)—grapples with the same issues. What makes this carved hinoki wood a sculpture, while the original fallen oak is not? Will Hinoki still be a sculpture (or the same sculpture) when it decomposes? 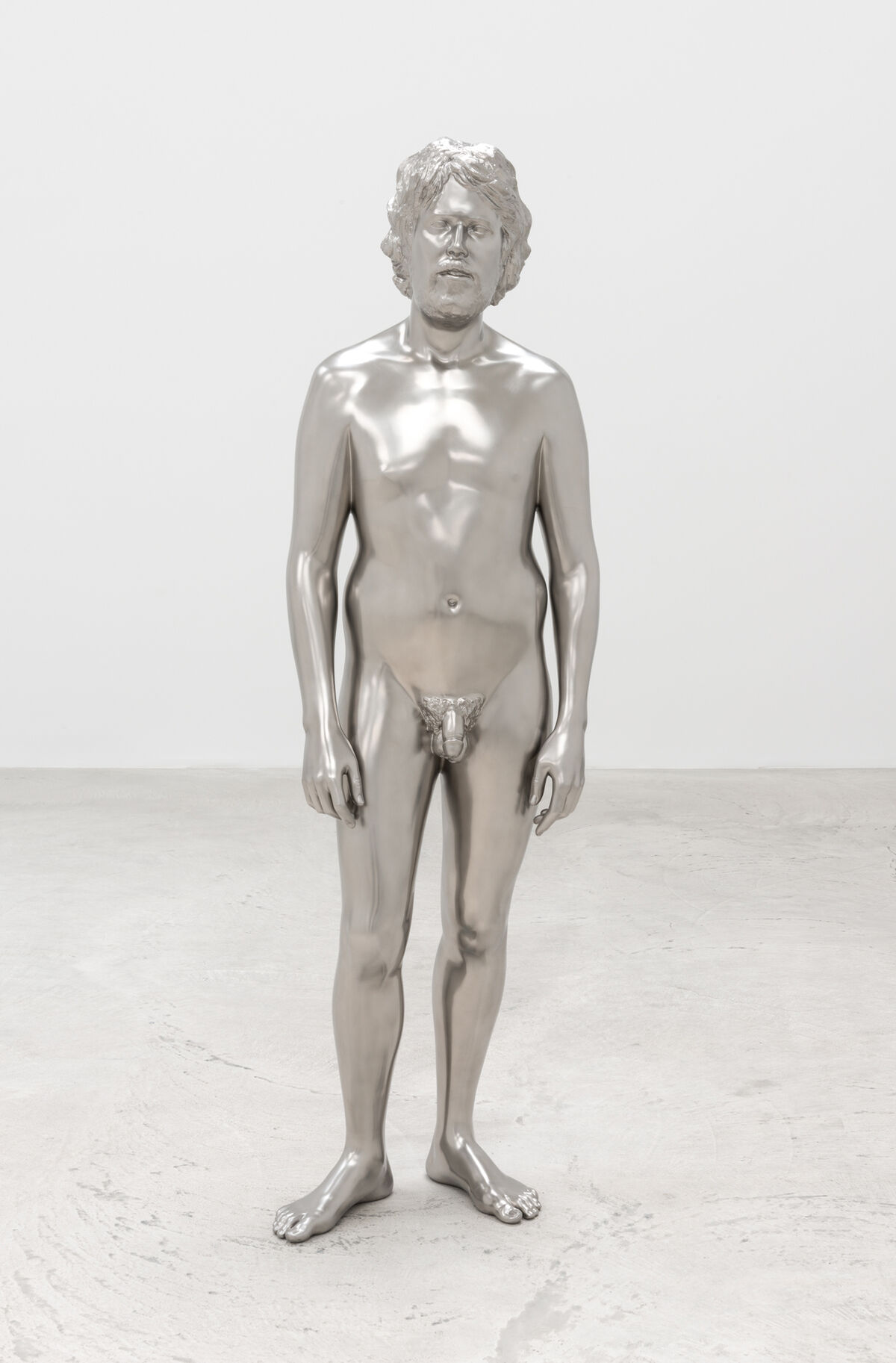 Far from the idealized male form we traditionally associate with figurative sculpture (see
Michelangelo
’s David, 1501–04), Ray gives us a shaggy-haired guy who bulges a bit at the hips. Like most of Ray’s figures, he’s not on a pedestal, but merely standing barefoot and naked in the gallery on the same level as his viewers. His weight is real, though: The solid stainless steel work clocks in at 1,500 pounds. The model for the piece is
Ry Rocklen
, a Los Angeles-based artist who is a former student and friend of Ray’s. Smooth, shiny, and grounded, his likeness is far more approachable than anything from antiquity. 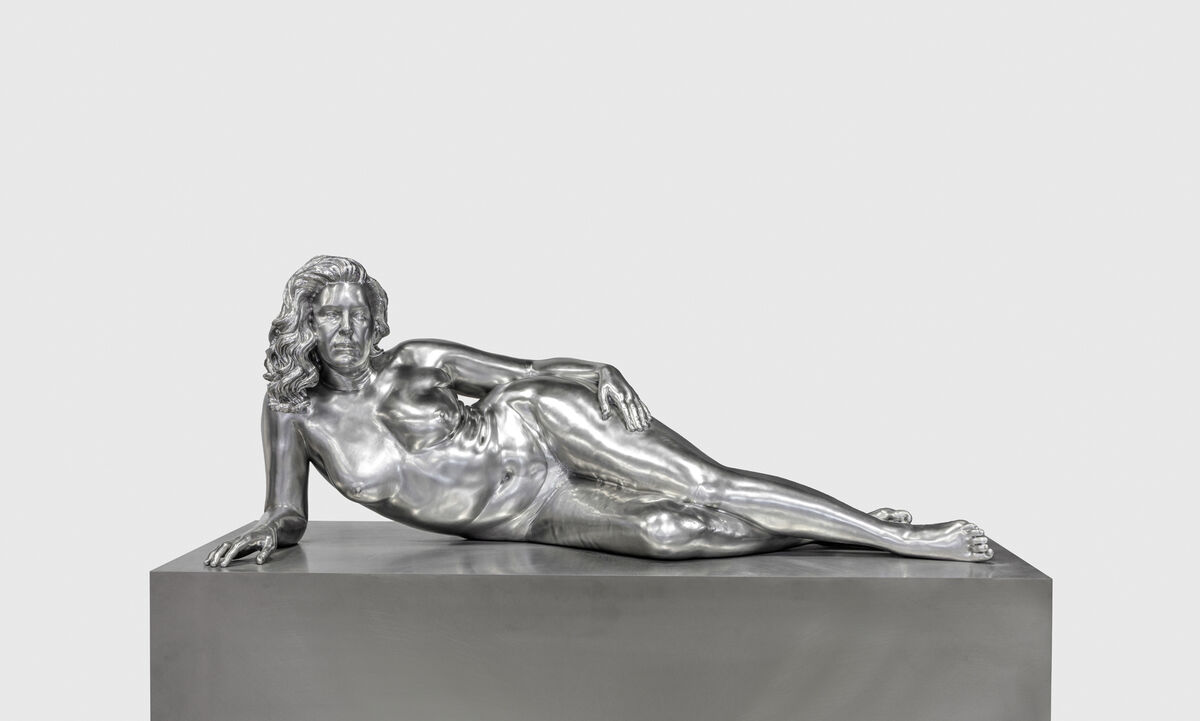 Made out of a machined block of steel, Reclining Woman features a smooth, shiny sculpture of a woman lying on a large steel box. The work took Ray seven or eight years to complete. “I’d look at it and think about it, change a direction, think about a toenail, think about an involuntary gesture of the toes in relationship to her squint,” he says. The extensive process required photographs and casts of thesubject; computer modeling; real clay and plaster mock-ups; a machine-foam prototype; and many assistants’ hands. The final piece asks the same question with which so many artists are still consumed: Is there anything new to do with the female nude? This time, thejust-larger-than-life woman gets a solid steel pedestal that’s even larger than she is. It’s as though Ray conjoins two different sculptures: one minimalist and abstract, the other figurative and uncanny. But it’s the body we remember.
Alina Cohen
Related Stories

Why Do People Still Think That Classical Sculptures Were Meant to Be White? 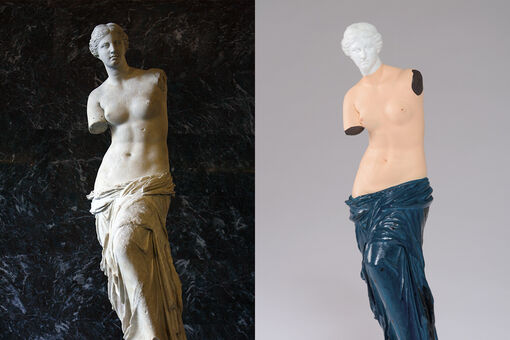 Why Do People Still Think That Classical Sculptures Were Meant to Be White?
Kim Hart
Apr 10, 2018