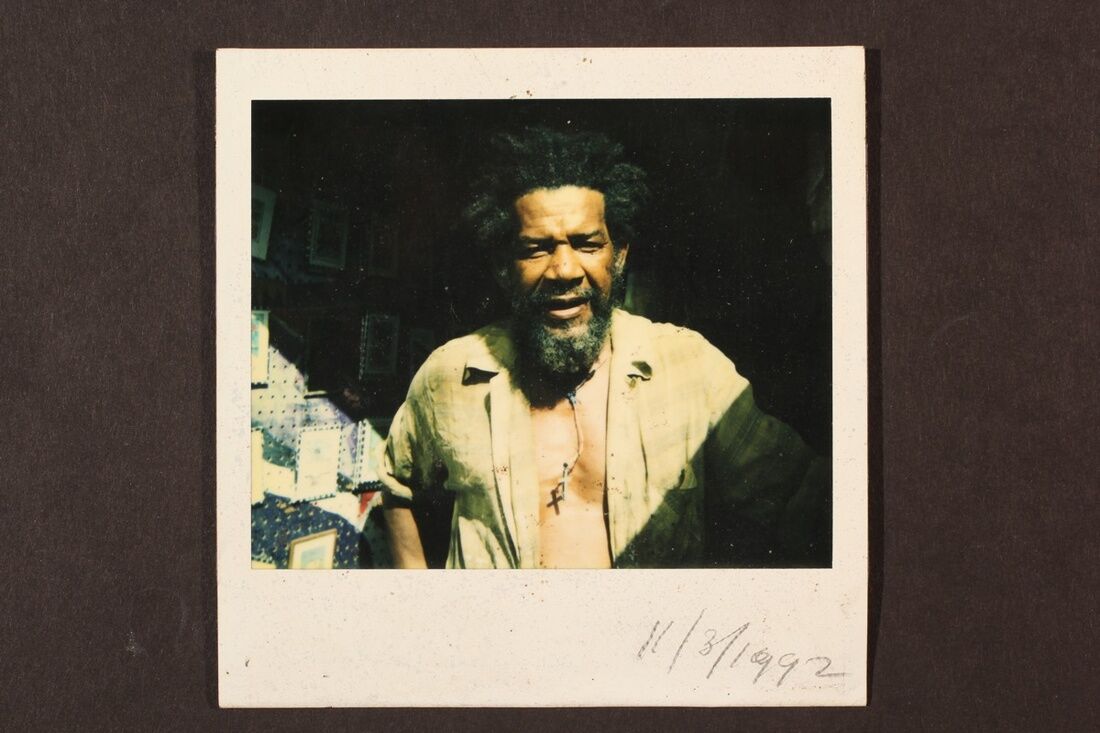 In the mid-1970s, the unknown Antiguan artist
Frank Walter
began contacting some unconventional venues in the hopes of landing a retrospective. “He wrote letters all over the world, saying, ‘I’m the most important living artist and I’d like to have an exhibition,’” explains Barbara Paca, one of the key organizers of a survey of Walter’s work being presented at the Antigua and Barbuda pavilion of the Venice Biennale. “The challenge was, he’d decided he wanted to have the exhibition in a coal mine in North Staffordshire. Or a youth hostel in Germany. Or a cruise ship in Italy.”
Unsurprisingly, none of those grand ambitions panned out for Walter. But the artist, who died in 2009, is finally getting a serious spotlight in Venice with “The Last Universal Man,” his country’s debut outing at the Biennale. It’s a rich exploration of his paintings—many of them executed on
unconventional materials
, like the small backing of Polaroid film boxes—as well as sculptures, signage, obsessive hand-written genealogy records, and other ephemera from his uncommon life. 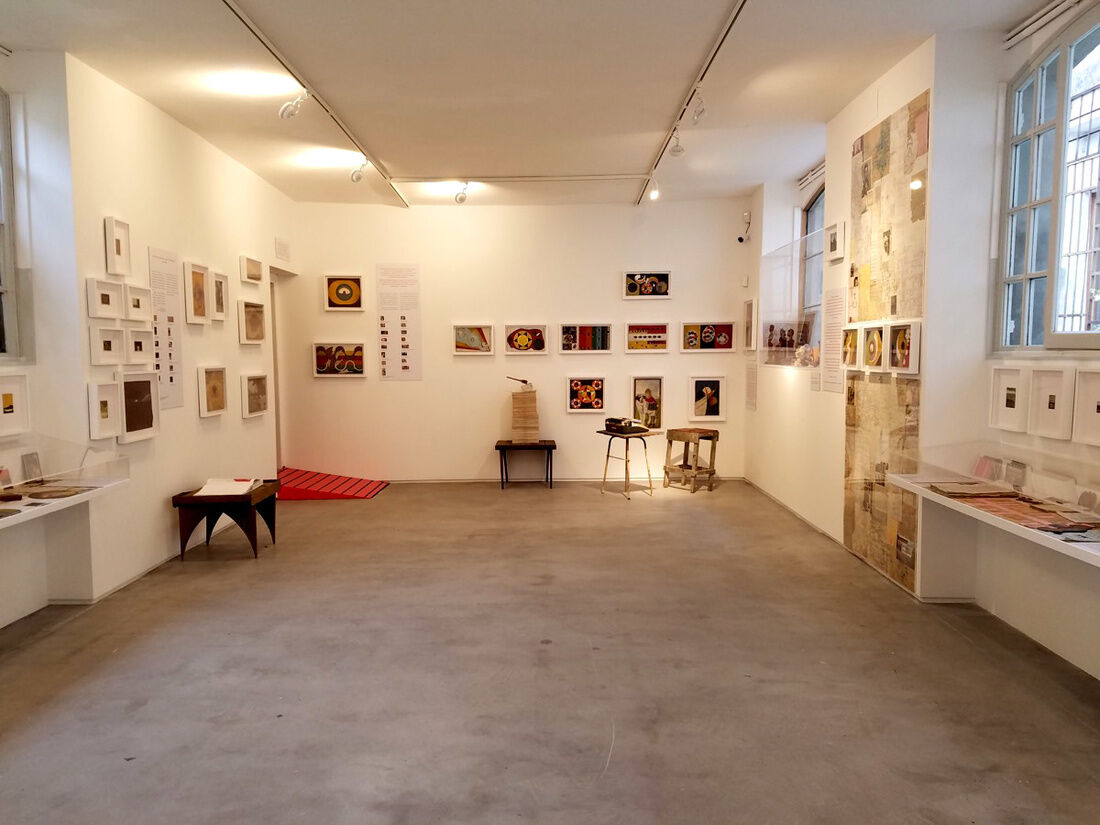 As Paca explains, Walter suffered from mental illness exacerbated by a move in the 1950s from Antigua to London, where he came face to face with the bitter realities of racism. Walter’s ancestry was exceedingly complex; he was the descendent of a German father and a Swiss-Antiguan mother and, Paca notes, had both slaves and slave owners as ancestors. In Antigua he had farmed, successfully, but as a black man in England he found employment options to be limited. (It was “clean the bathroom, or sweep the floor,” Paca says.)
Walter later traveled through Germany and Italy before returning to Antigua, where he lived a solitary and remote life (spending 1961–68 on the nearby island of Dominica). Throughout these years he was painting feverishly, amassing a stockpile of some 5,000 works that remained boxed up and unshared. He wrote several versions of an autobiography using a rusty typewriter that is on display in the pavilion, along with an 8,000-page stack of the manuscript itself (typo-free, Paca confirms). 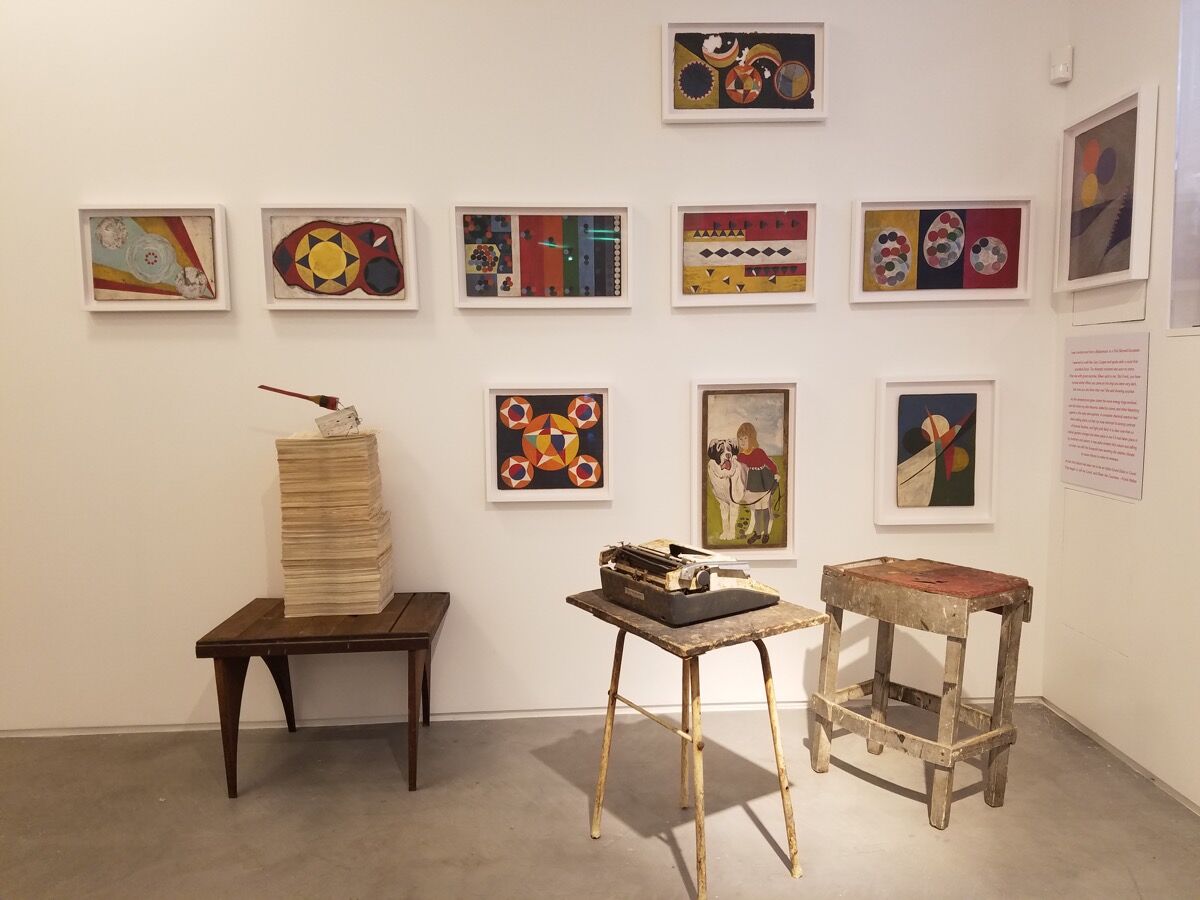 Advertisement
On his town’s high street, Walter operated a small shop offering various goods and services: small hand-colored photocopied drawings, custom signs, children’s educational toys, and a series of hand-painted wooden placards bearing the red letter ‘L’ that drivers with learning permits could hang inside their vehicles. Those he sold for around $3 a piece. Meanwhile, countless tiny oil paintings were added to the archives, awaiting that future show at some impossible location, like a high-security military site (another of Walter’s dreams).
“Frank was an intellectual, a philosopher, a lecturer, a painter, a poet, an artist who had a vision,” says his second cousin, Vaughn Walter, who spent a great deal of time with the artist between the ages of three and 11. “As a child, he’d sit us down under a fruit tree, and while he’s typing on one subject matter, he’s lecturing us on other matters. He was a very multi-functional gentleman,” Walter says.
It’s impossible to ignore the undercurrent of eccentricity running through Walter’s biography, but that story is mere window dressing for a body of work that is thrillingly realized. The artist wended his way through various styles and concerns over the decades, and examples of all of them are present in “The Last Universal Man.” 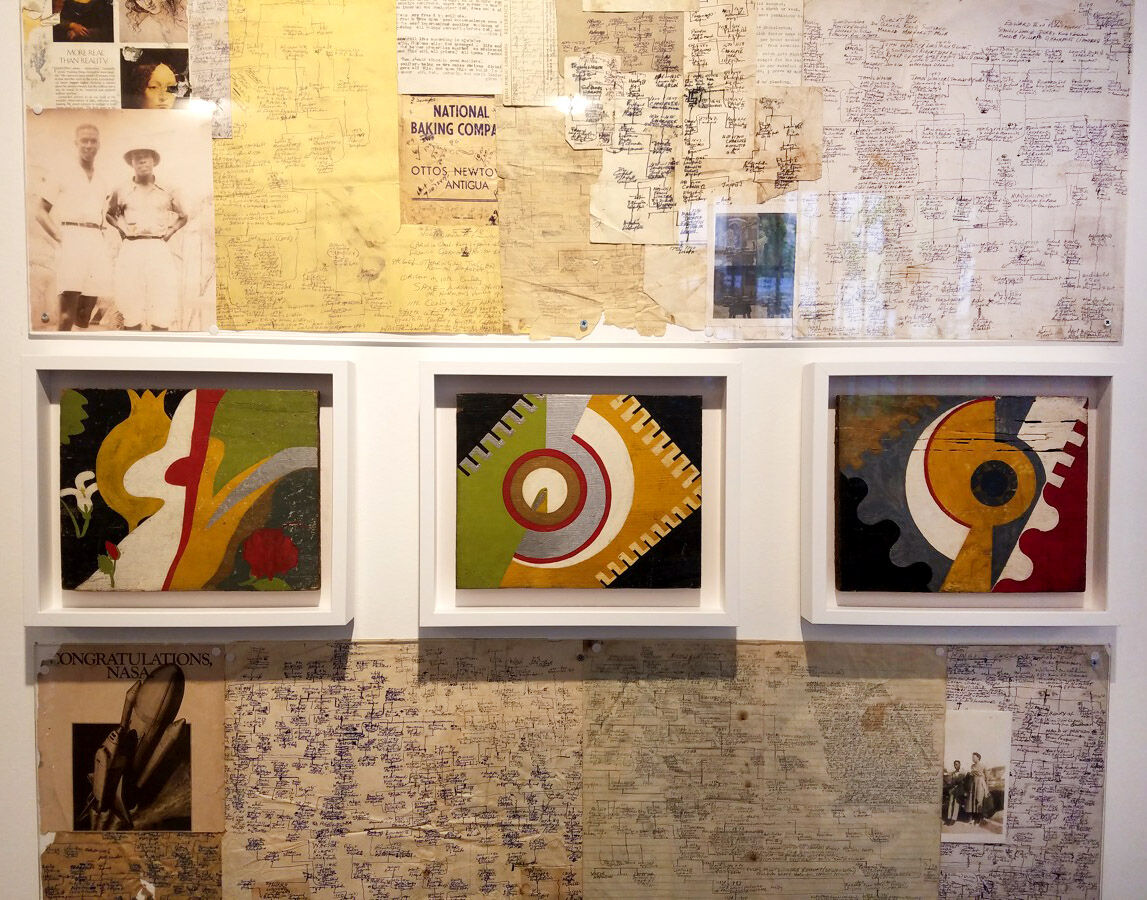 There are wildly divergent
self-portraits
: In one he appears as a smiling black boy wading in a cool blue ocean; in another, he’s in stark silhouette, and unnaturally chalk-white. “Our descendants are from Germany,” Vaughn explains, “and Frank believed, if you’re German, you are white.” The self-portraits are only one of several tangled examinations of race in the exhibition. (“It was quite evident,” Walter is quoted as saying in a wall text, “that nature was telling me that I was still the Europoid man awaiting the relative climate to cause nature to make its reverses.”)
Other paintings were completed on
scraps of paper
, record sleeves, tondo-shaped spools—or, in the case of a hazy Scottish
landscape
, done on the back of packaging for a mosquito coil. Some works have the inexplicable, simple magnetism of the intimate paintings of
Forrest Bess
. Elsewhere, Walter composes jangly
abstract compositions
with names like “Wavelights of Heat and Light” or “Psycho Geometrics With Large Nuclear Power” that echo with the output of
Hilma af Klint
or late-period
Francis Picabia
. There are paintings of various colored demons; of a boat steaming across the ocean; of watermelons, ballerina legs, and forests; of Hitler. 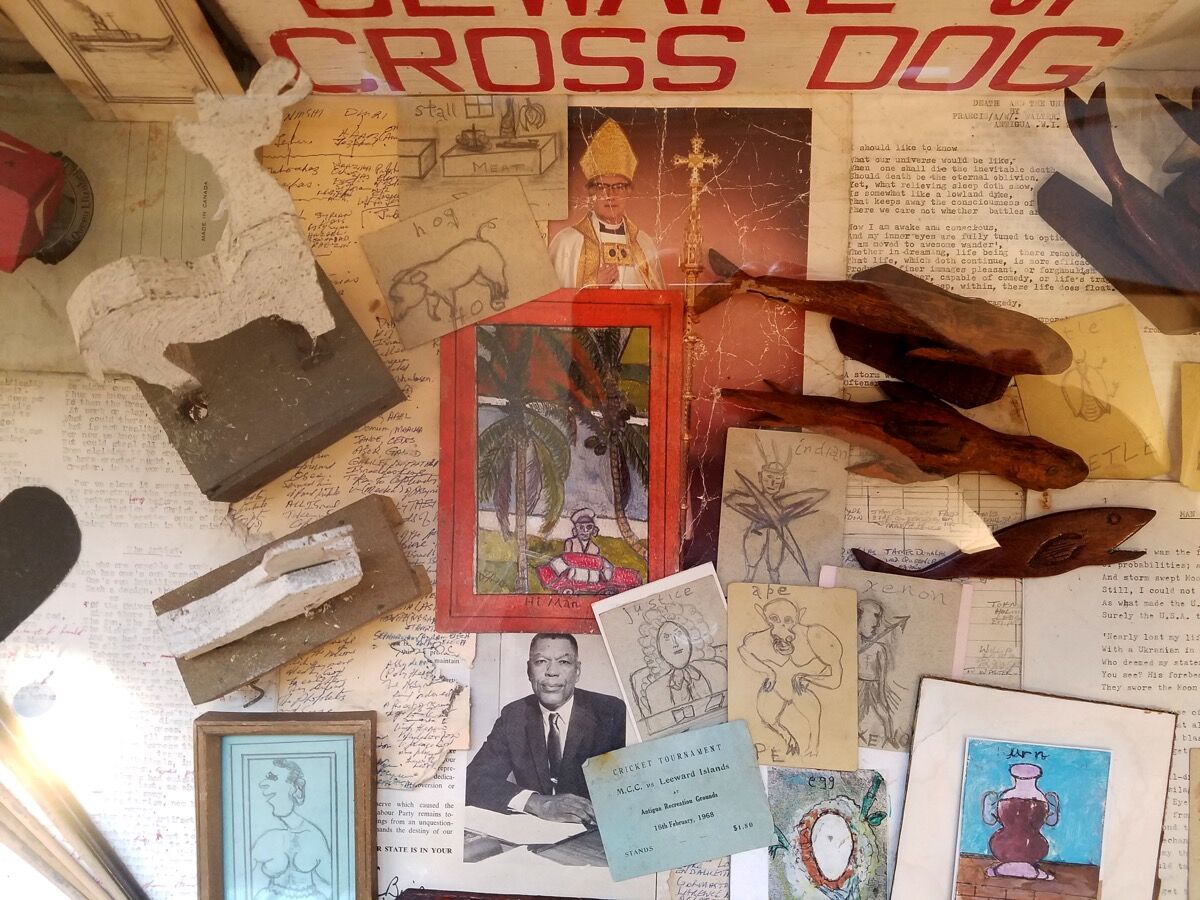 Walter may have died at the age of 83 without ever receiving his due, but he’s certainly gotten serious respect posthumously (including from
Peter Doig
, who bought his works at The Armory Show back in 2013). “The Last Universal Man” is a reverential, comprehensive look at a multi-hyphenate autodidact who, Paca says, earned his reputation as the “John Nash of Antigua.” This loving survey at the Venice Biennale might lack the situational drama of a subterranean coal mine or an international cruise ship, but I expect that the late artist would be proud nonetheless.
Scott Indrisek
Related Stories