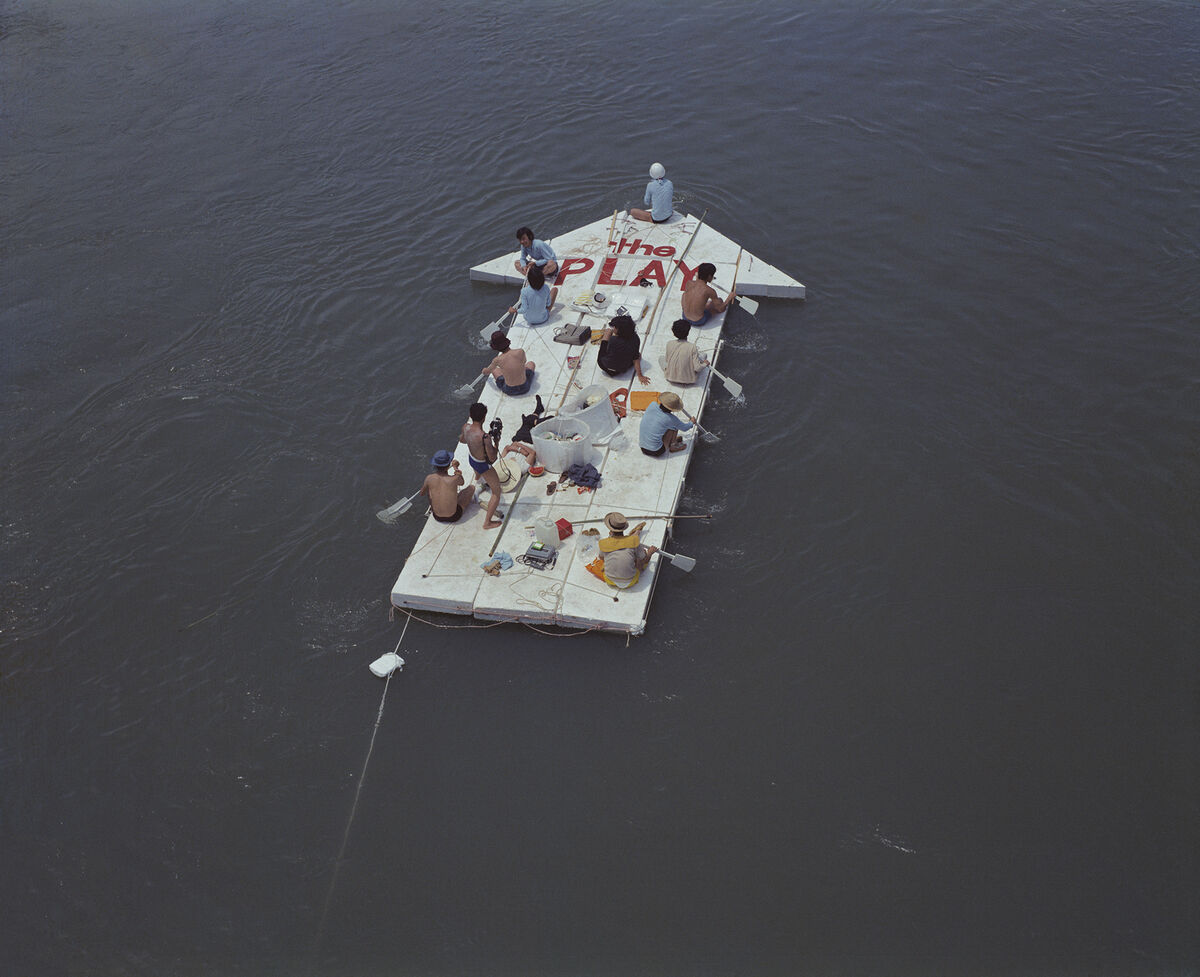 The Play, Current of Contemporary Art, 1969. Courtesy of the Japan Society.

For a few blissful minutes on February 11, 1970, four members of the
Japanese art
collective Group Ultra Niigata (known as GUN) dashed across a dry bank of the Shinano River in the small town of Tōkamachi, blasting bright pigments onto the snow with fertilizer sprayers. Half an hour later, fresh snowflakes reset the scene.
There was no audience present to appreciate the transformation of the dreary landscape, but the ephemeral painting performance came to be known as Event to Change the Image of Snow. We are only aware of it today because of the photojournalists
Hanaga Mitsutoshi
and Iso Toshikazu, who tagged along to capture the event.
Their photographs, the best of which are in spectacular technicolor, spark with an egoless sense of play, spontaneity, and grandeur—traits that characterize the artists and collectives who emerged in what art historian Reiko Tomii calls the “expanded 1960s” in Japan. During this period, spanning 1954 to 1974, a post-war spirit of freedom and experimentation in artistic production manifested far outside city centers. It’s only recently, thanks to Tomii, that some of these anti-establishment artists have received an international profile. 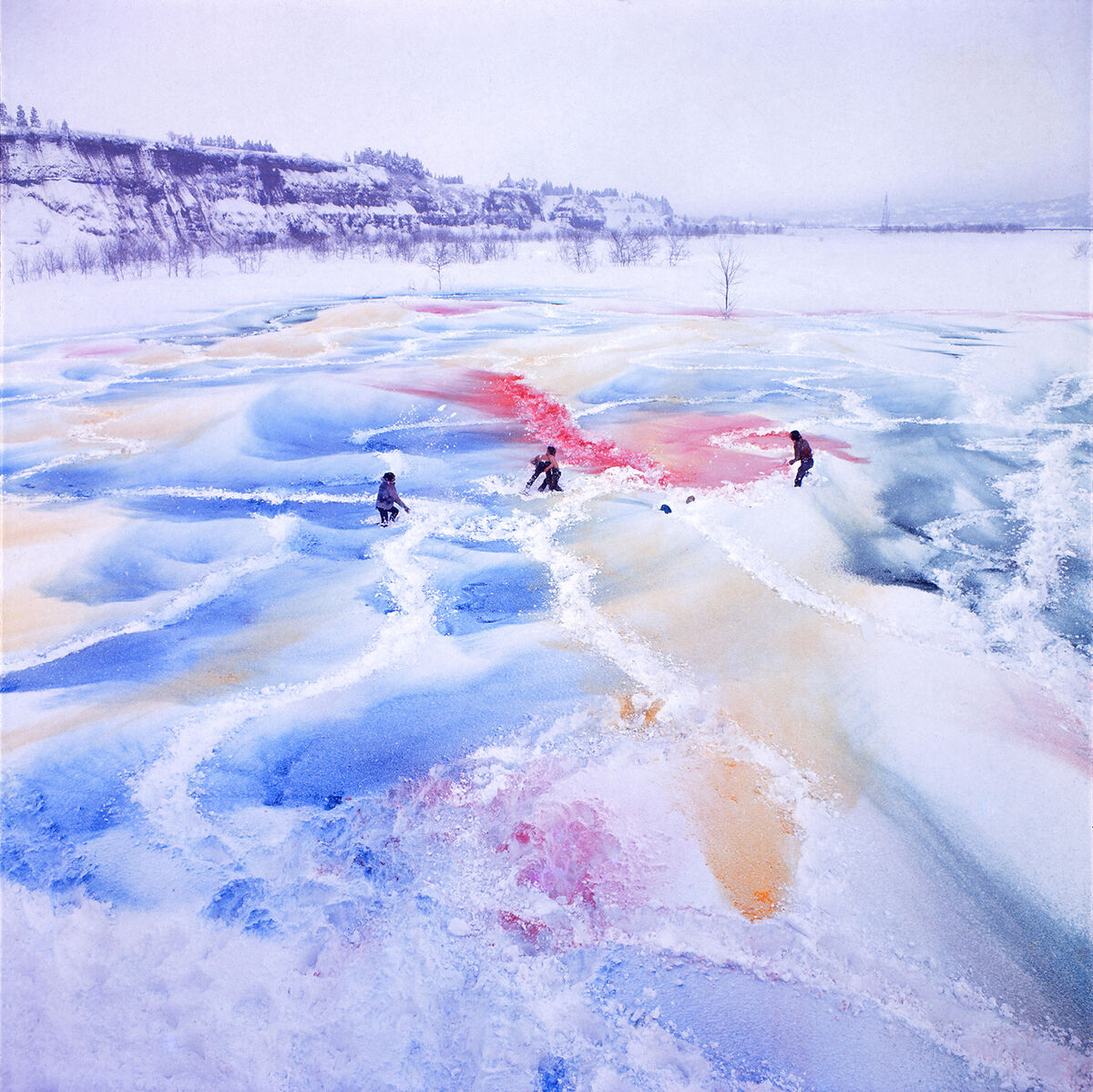 GUN, Event to Change the Image of Snow, 1970. Photo by Hanaga Mitsutoshi. Courtesy of the Japan Society.

At the Japan Society in New York through June 9th, “Radicalism in the Wilderness: Japanese Artists in the Global 1960s,” curated by Tomii and based on her award-winning 2016 book, presents 280 works by GUN, the collective
The Play
, and the artist
Matsuzawa Yutaka
, all of whom worked on the outskirts of the country and embraced conceptual practices to expand long-held definitions of art.
As Japanese society underwent sweeping changes following World War II, Tomii observes in the catalogue, “regional subcenters mushroomed…making the whole archipelago a space of contemporary practices.” Forget Paris or Berlin, New York or Tokyo. “Radicalism in the Wilderness” disrupts the “center-periphery,” as Tomii calls it, to invoke distinct artistic practices that are “out there”—both physically and artistically.
Yet even in the wilderness, these utterly unconventional artworks, performances, and
happenings
share affinities with contemporaneous developments in art—such as
Conceptualism
,
land art
, and
mail art
—occurring far afield. In the 1960s, parallel artistic practices emerged around the world as travel and communication technologies developed, a notion central to the exhibition that Tomii calls “international contemporaneity.” (International contemporaneity can also be seen in recent exhibitions that broaden definitions of modern art by including non-Western practitioners, such as the Walker Art Center’s expansive 2015 survey “International Pop.”) 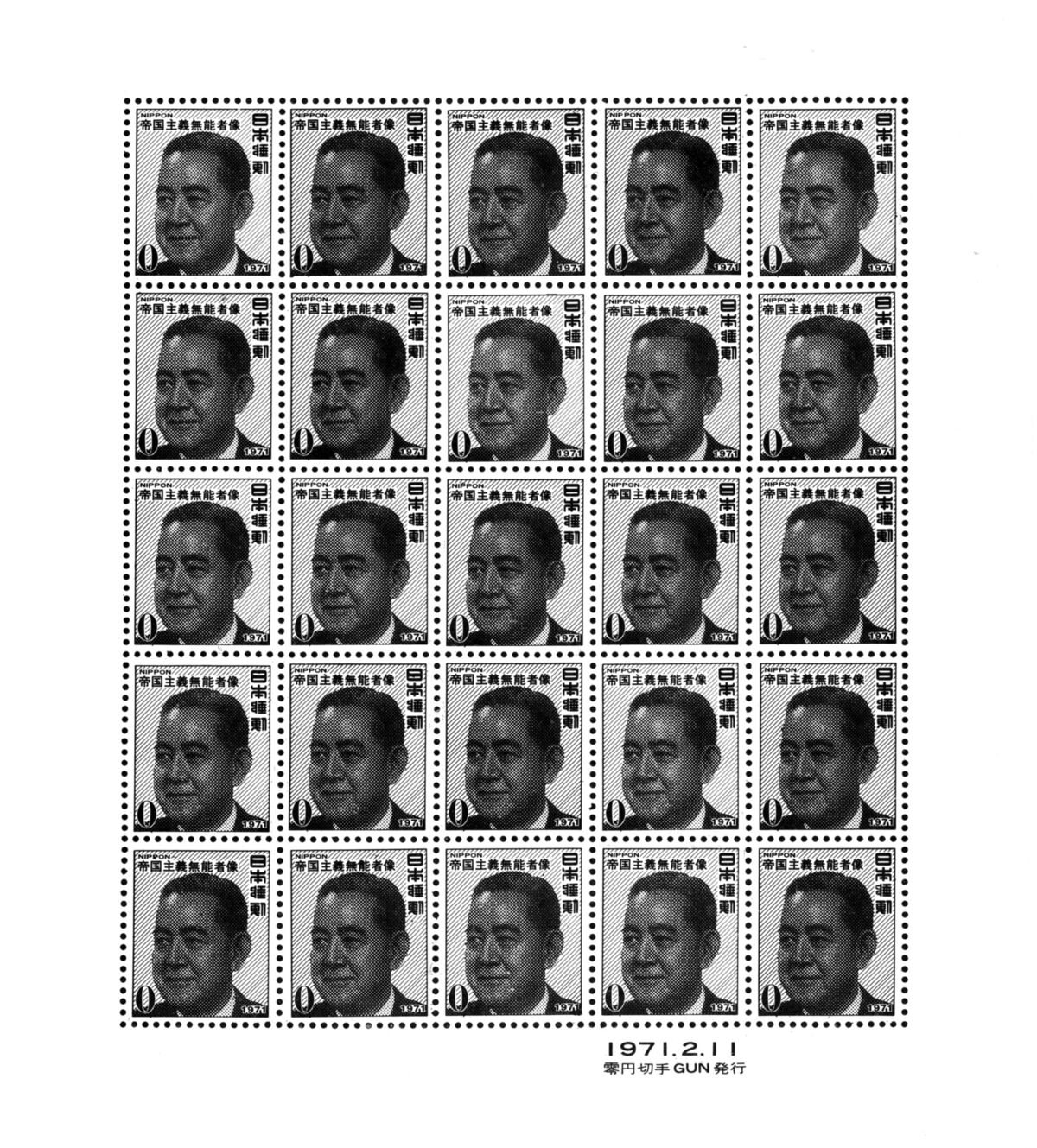 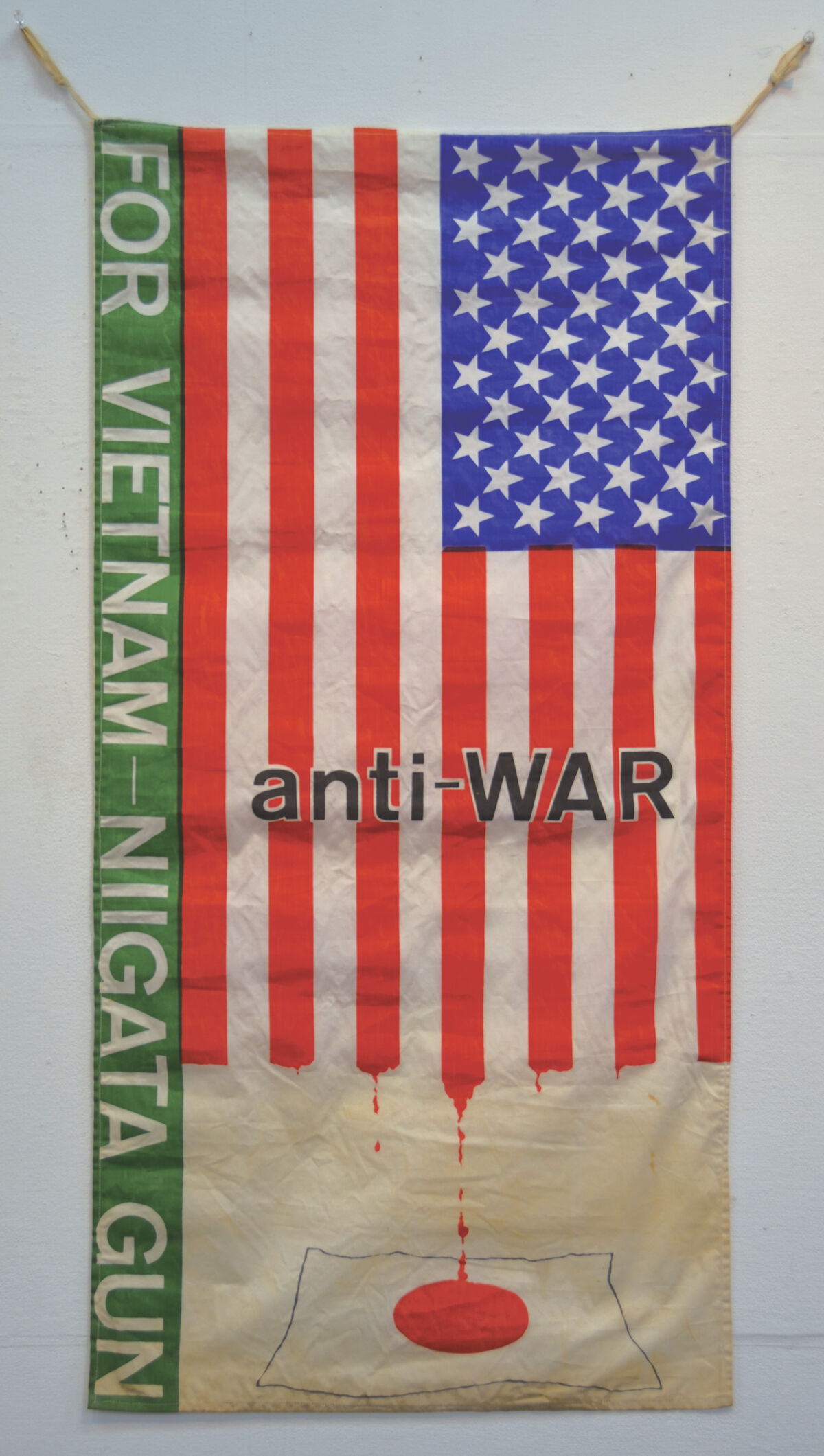 Advertisement
To help define the stumbling interconnections that link these artists to local and global contexts, Tomii distinguishes between “connections”—actual encounters with a counterpart or their work—and “resonances”—visual or conceptual similarities often retrospectively acknowledged. Event to Change the Image of Snow, for instance, bears a close resemblance to
Dennis Oppenheim
’s One Hour Run (1968) and Annual Rings (1969), performances in which the American artist cut paths into fields of snow.
That similarity can be attributed to a moment of connection: GUN’s core members—
Maeyama Tadashi
and Horikawa Michio, in particular—were introduced to international trends like land art through magazines such as Bijutsu techō (“art notebook”), which published a lushly illustrated feature on the emerging genre, primarily practiced in the United States, entitled “New Nature: Elementalism ‘Earthworks’” in its July 1969 issue.
GUN, which Tomii considers the first vanguard collective from Niigata Prefecture (pejoratively called the “backside” of Japan), applied the performative grandiosity of land art that they saw pictured in Bijutsu techō to the cultural concerns of their locale, where heavy snow falls for six months out of the year. In this gloomy and difficult climate, the snow represents constant struggle and, due to its sheer weight, potentially fatal danger. Maeyama and Horikawa, who both lived and worked in the area, developed their premise around changing cultural attitudes; through their artwork, they sought to transform the snow into something unexpectedly happy. 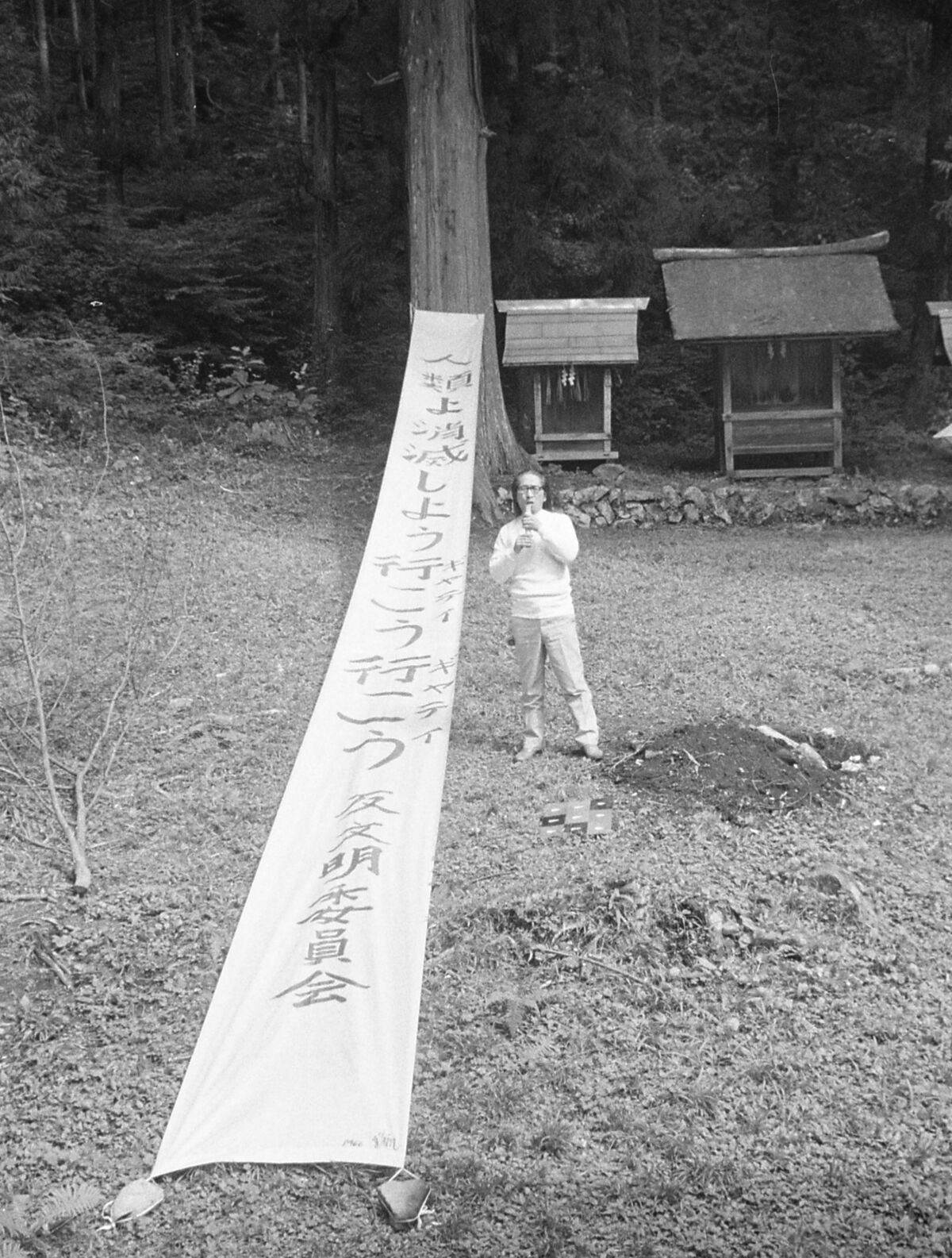 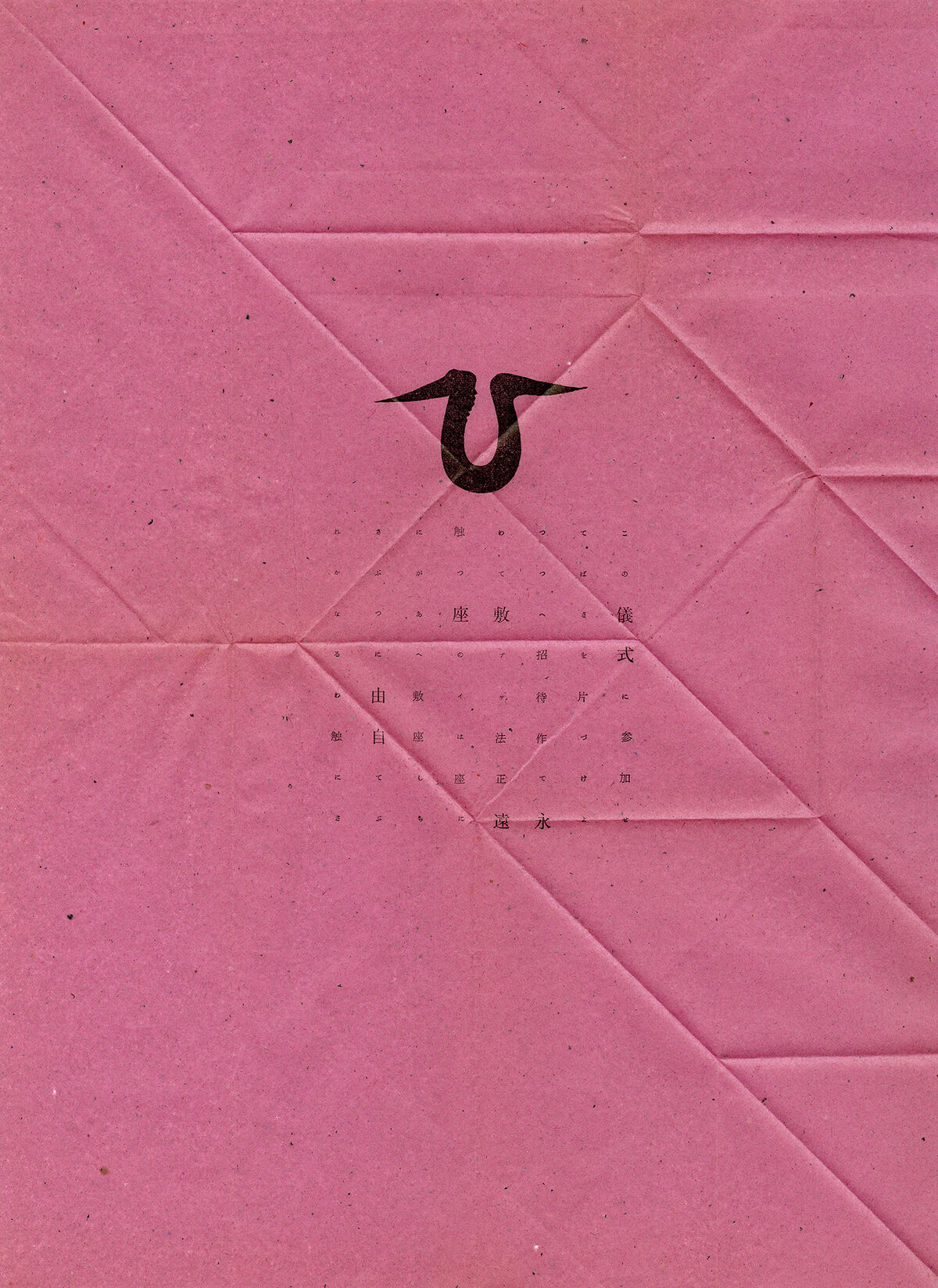 On the other hand, the late Matsuzawa Yutaka, a prolific artist most amply represented in the show, worked mostly in isolation, conceiving of a singular, immaterial form of art. When he eventually learned of like-minded Conceptual artists in the mid-1960s, Matsuzawa connected with them through mail, telegram, and in person. His global coterie included
John Baldessari
,
Yayoi Kusama
(who was also born in his hometown of Matsumoto),
Gilbert & George
,
On Kawara
,
Lawrence Weiner
, and
Hanne Darboven
, whose collaborative efforts are featured in the show.
Like many of his peers around the globe, the horrors of the war inspired Matsuzawa to transcend the accepted boundaries of art and culture in order to question institutional thinking. But his work responds in particular to its conflicted effect on Japan, which was eager to participate in the world’s modernist project. The rampant consumerism overtaking Japanese society in the 1950s and ’60s led him on a quest to completely dematerialize his art, or create “an expression of the invisible, invisibly,” as Tomii said at the preview for the exhibition.
For over a decade, Matsuzawa developed a unique brand of immaterial conceptualism, embracing interdisciplinary practices from parapsychology to psychics to non-Zen Buddhism, all of which engaged mental faculties to picture imperceptible happenings. Between 1957 and 1964, he created the complex theory of Psi, a methodology to explore the extrasensory abilities of the mind. Works on paper from this time employ Buddhist cosmological signs and the artist’s own symbolic lexicon, but they also seem to reference the
minimalist
grid. On June 1, 1964, a legendary revelation commanded Matsuzawato to “vanish matter,” and pushed him to further dematerialize his work. He devised an object-less, text-based practice he called the art of kannen (meditative visualization). The work of art was thus conceived as an “apparatus,” and language—presented in the form of photocopies, lithographs, and postcards, and largely disseminated through the mail—offered an “operation manual”to understand and mentally see the works.

Matsuzawa Yutaka, Independent ’64 in the Wilderness, 1964. Courtesy of the Japan Society.

Tomii derived the phrase of “wilderness” from Matsuzawa, who, in 1964, took out a small magazine ad that advertised an imaginary exhibition called “Independent ’64 in the Wilderness.” Artists were invited to deliver a “formless emission” by “any delivery method,” which presumably encompassed telepathic and supernatural methods, according to Tomii. Revealed only in the ad, the exhibition was an invisible experience, appreciated through the mind’s eye. This psychedelic experiment might seem in line with the drug culture that unfolded in the 1960s, but reflects instead a moment of resonance; Matsuzawa intentionally turned away from chemical agents to expand the mind with more ancient Japanese sources like non-Zen Buddhism.
Like Matsuzawa, Osaka-based “happeners” The Play sought to disrupt the comfortable complacency that they saw overtaking Japanese society during the period of strong economic growth and increased modernization. Instead of protest or rebellion—youth culture’s popular modes of dissent in the 1960s—The Play chose “voyage” as their strategy as a means of disruption. For their best-known work, Current of Contemporary Art (1969), The Play embarked on a styrofoam raft shaped like an arrow from Tōnoshuma island, south of Kyoto, and rowed to Nakanoshima island in Osaka. The public-facing journey was meant to create “an image of liberation from all the material and mental restrictions imposed upon us who live in contemporary times,” the artists wrote.
This project resonates with similar experiments by Conceptual artists like
Bas Jan Ader
; both of their works were included in a 2016 show at the Parrish Art Museum called “Radical Seafaring.” But unlike Ader’s fateful sailing trip across the Atlantic Ocean, on which he disappeared and likely died, The Play conceived of working in landscape as an act within society, rather than in solitude. 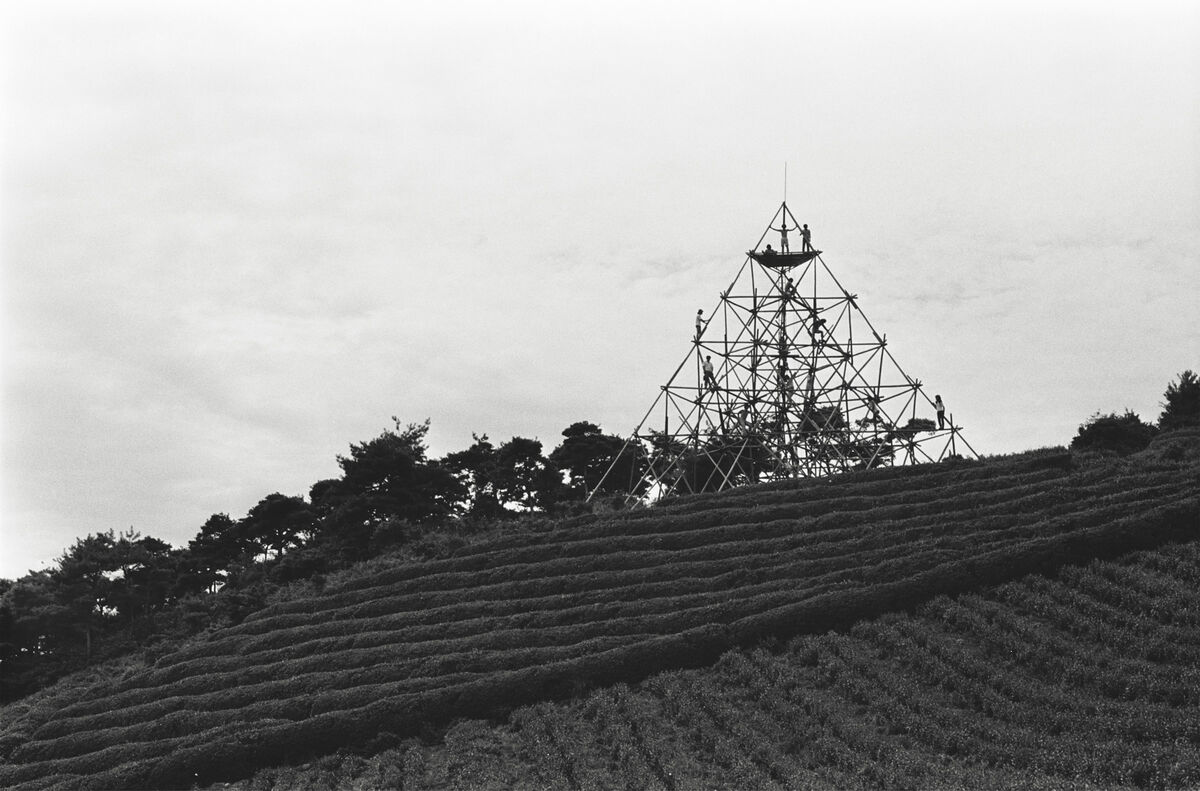 Yet no project by The Play has more perfect resonance than the epic, 10-year undertaking Thunder (1977), which, like
Walter De Maria
’s Lightning Field from the same year, was built to conduct lightning. The Play constructed a wood pyramid capped with a copper lighting rod, first placed atop Mount Jubu, while De Maria installed a grid of 400 steel poles in the New Mexico desert. (After inaugurating Thunder, The Play learned of De Maria’s Earthwork via a friend based in Germany. They wrote a letter to the American artist, but received no response.)
Despite their similarities, the two works couldn’t be more different. De Maria aimed for a sublime experience of nature, but for The Play, thunder recalled the ancient “thunder god,” a traditional subject of Japanese art. While De Maria’s installation was calibrated to be regularly lit up, The Play waited in vain for lightning to strike for several years, gathering every summer in hopes of seeing it happen. De Maria enjoyed sponsorship and hired help for his project; The Play self-financed and built it on their own. And while De Maria tightly controlled visitation to his Lightning Field, The Play used graphic posters (wonderfully designed by Sasaki Toshiaki) to invite viewers to an open, communal experience of waiting in nature.
In these expanded 1960s, artists all over the world questioned society, pushed boundaries, and shared ideas. They sought to meaningfully engage with globalism, international politics, and one another. The fact that these peripheral Japanese figures are still largely unknown despite institutional attention for other avant-garde Japanese artist groups like
Gutai
and
Mono-ha
, who worked around the same time, makes clear that an assessment of art history is woefully incomplete without an adventure into the wilderness.
Julia Fiore
Related Stories