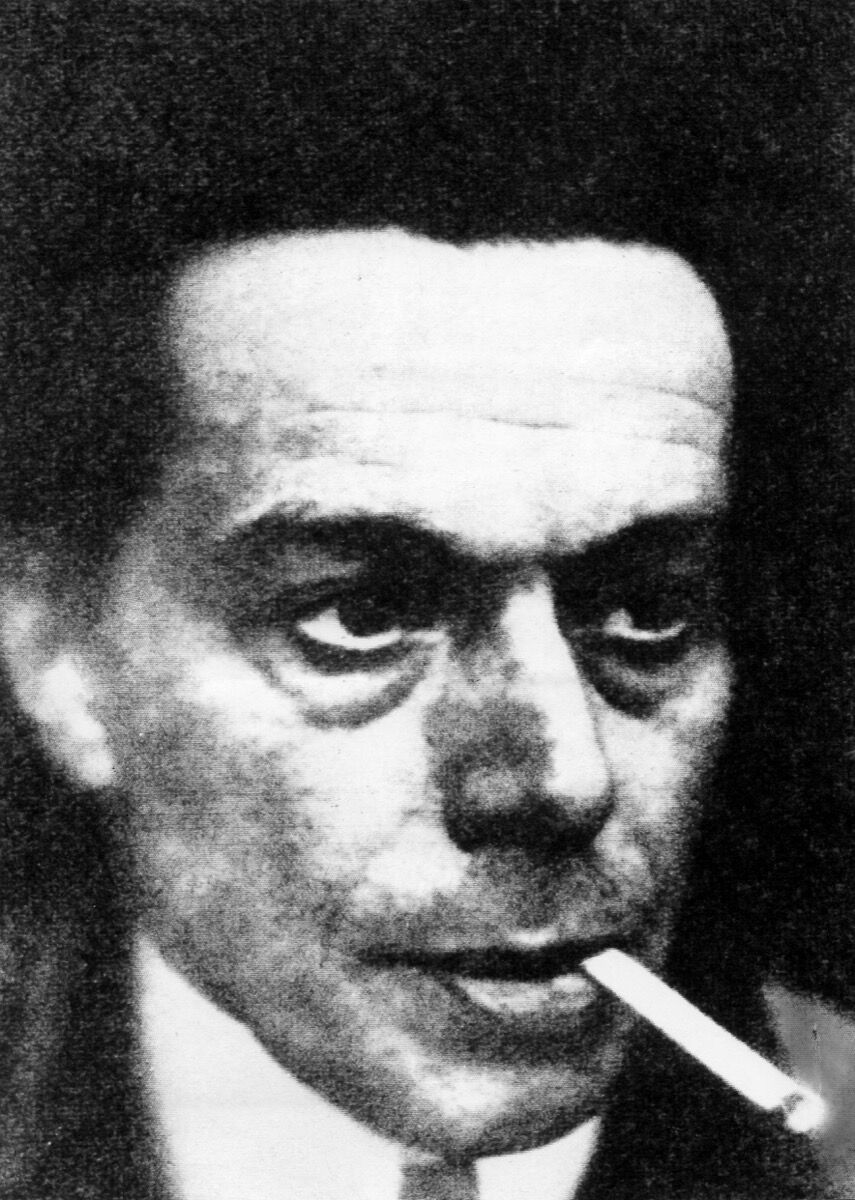 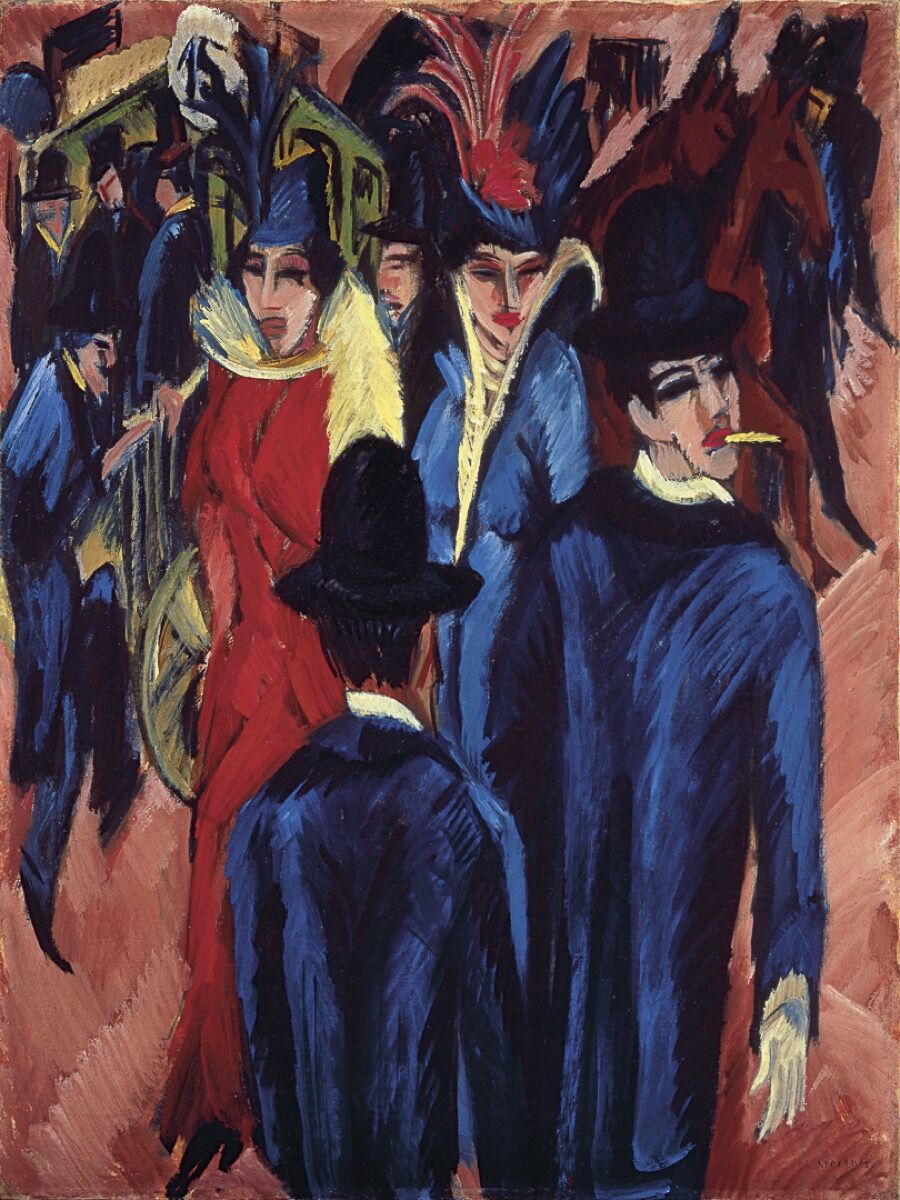 In 1905, a group of artists in Dresden united under one name:
Die Brücke
, or The Bridge. Inspired by Friedrich Nietzsche who wrote that “what is great in man is that he is a bridge and not a goal,” these artists saw themselves as bridges. They were transporting artists from the world of old, academic art to a new, modern kind of expression. Their work would privilege emotive depictions of the world around them. The concluding line of their manifesto, published in the form of a woodcut print, states: “Whoever renders directly and authentically that which impels him to create is one of us.”
Ernst Ludwig Kirchner
, a founding member of Die Brücke, would render the world around him directly and authentically until he committed suicide in 1938 following the confiscation, derision, and destruction of many of his works at the hands of the German National Socialist Party. He was a prolific artist who worked across cities and media, creating woodblock prints, lithographs, drawings, sculptures, paintings, photographs, and tapestries. According to Janis Staggs, co-curator of a current retrospective on view at the Neue Galerie in New York City, despite being a student of architecture with no fine art training, Kirchner “embodied the ideal of the Gesamtkunstwerk (total work of art) in his art and life.”
The following three paintings, from Kirchner’s early output in Dresden to his epic landscapes depicting the Swiss Alps, show Kirchner as a total artist and pioneer of German Expressionism. His raw, truthful works offer insights intothe rapid modernization of Germany in the early 20th century; nature as a sublime and restorative escape; and, oftentimes, the artist’s own psyche. 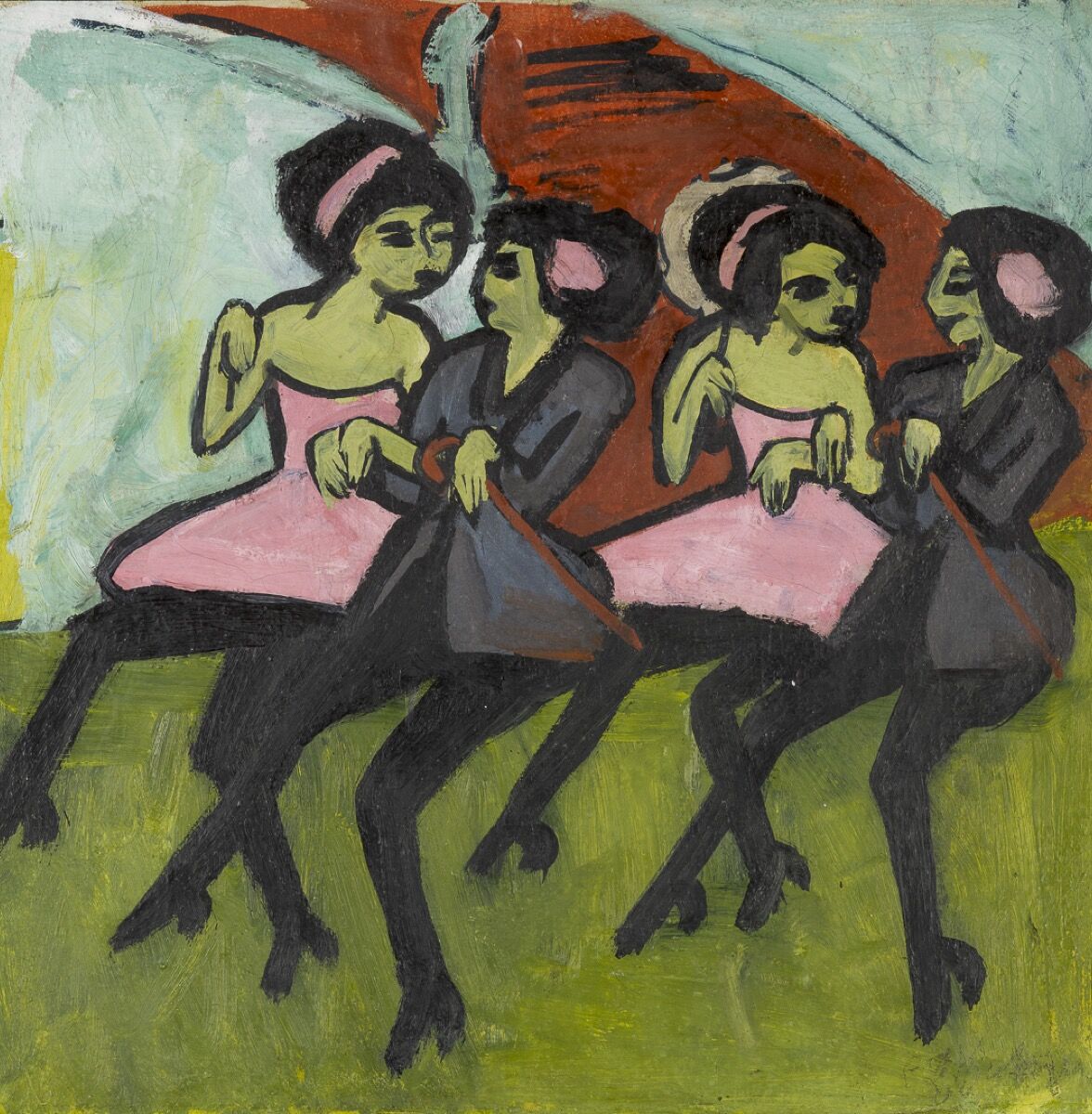 “For [Kirchner], color and light were absolutely welded together,” says Jill Lloyd, co-curator of the Neue Galerie retrospective with Staggs. Panama Dancers, from the artist’s time in Dresden, is an example of how the invention of electric light specifically impacted Kirchner as a colorist.
In Panama Dancers, four figures are on stage performing a popular dance called the cakewalk. The performance in the painting has been identified as a vaudeville show by an African American dance troupe that Kirchner would have seen. The cakewalk is a pre–Civil War dance historically done by slaves, in which pairs would lean back and kick up their legs in a prance-like movement meant to mimic slave owners.
In Kirchner’s interpretation, the faces of the dancers and the stage are a sickly chartreuse. The synchronized pairs look at one another, and eight tangled black legs pop against the acid-green ground. Lloyd attributes the severe coloring to the new arc lights that were brought into theaters. These lights sat at the front of the stage, lighting the performers from below, and oftentimes were covered with colored filters. The hues in this work are bright, expressive, and seemingly arbitrary. The colors aren’t arbitrary, though—the dancers are literally bathed in the limelight, the newly installed arc lights casting them in a neon glow.
“[Kirchner] is really a painter of modern life,” Lloyd explains. To the artist, this meant painting modern subjects in innovative ways. He would move to Berlin in late 1911 and continue to depict the frenzy of the electrically lit city. In his iconic street scenes, faces were garishly underlit, and every cheekbone and bend in the road would become a sharp angle. 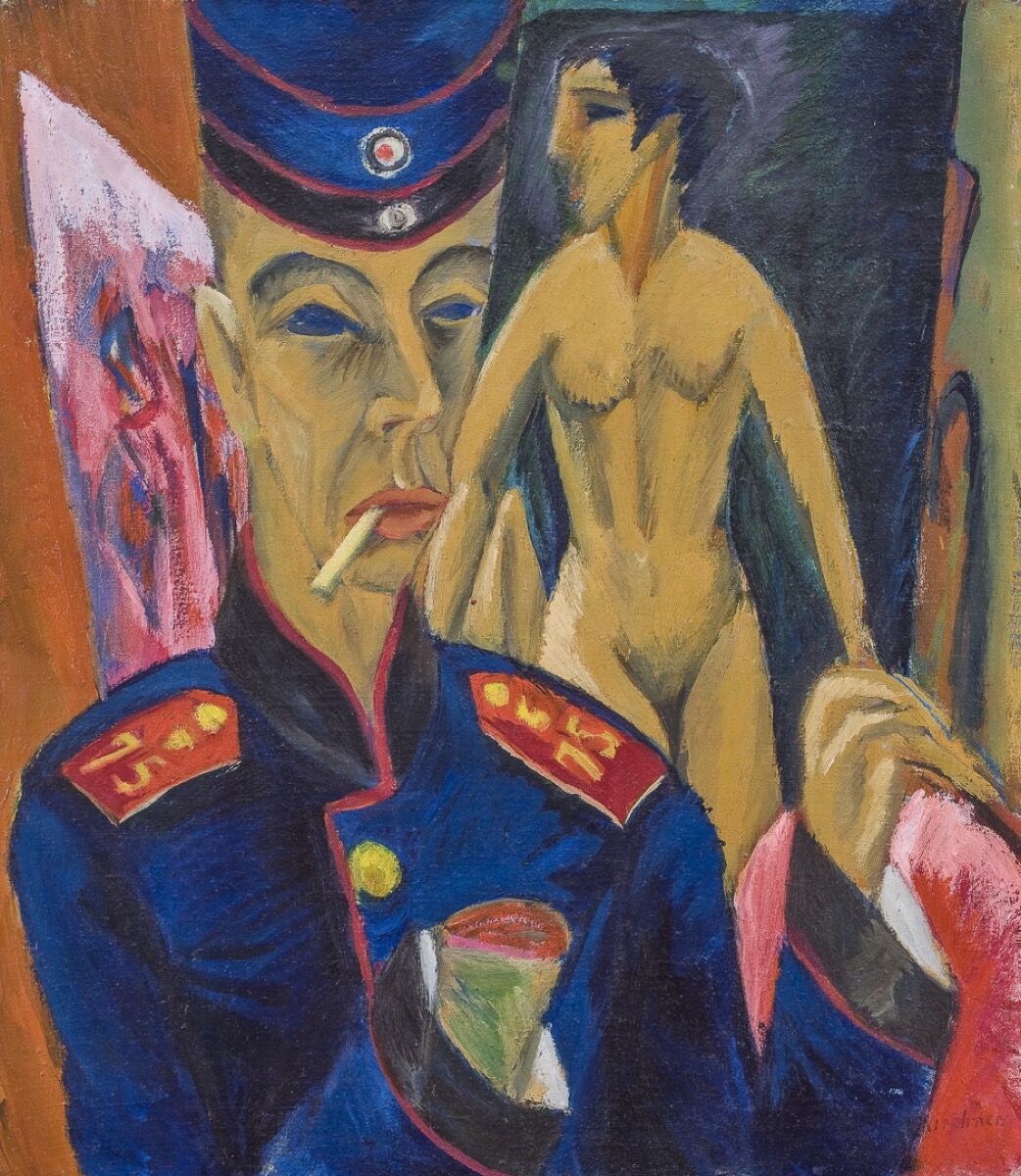 Advertisement
Throughout Kirchner’s career, self-portraiture was something he returned to constantly. He created vulnerable woodcuts in which the gashes in the wood emphasized the bags under his eyes or the sharpness of his features. He painted himself with various models, his long-time partner Erna, and even his cat, Boby. He took photographs of himself working in his studio or dressed as a solider, a cigarette casually dangling from his lips. Kirchner’s Self-Portrait as a Soldier is one of his most candid, and provides insights into his relationships with war and self-portraiture.
In Kirchner’s myriad self-portraits, Staggs says you can see his “shifting understanding of who he was as a man and an artist.” Kirchner’s aesthetic trajectory can be traced through his experimentation with different materials, colors, and settings. Self-Portrait as a Soldier comes out of an emotionally turbulent moment in the artist’s life, painted just as he began treatment in sanatoriums across Germany and Switzerland trying to recover from the trauma inflicted by war.
In the spring of 1915, Kirchner volunteered to serve in the 75th Field Artillery Regiment to avoid being drafted into combat. In the fall of that year, he suffered from mental and physical breakdowns and received a provisional discharge to regain strength. Kirchner was so terrified at the prospect of returning to war that he exacerbated his physical ailments by starving himself. He would hide uneaten food from his nurses in a pocket he sewed to the inside of his coat. During this time, he was diagnosed with alcoholism and became addicted to Veronal and morphine.
Self-Portrait as a Soldier is a psychologically fraught work. Kirchner presents himself wearing a uniform, but not on a battlefield: He is in his studio with a nude model posing behind him. His right hand, in central focus, has been severed, and he stares off into the distance emptily. Of the portrait, Lloyd says that “there’s a huge amount of theater in Kirchner’s work.” Kirchner did not lose his hand at war, but the mangled arm alludes to the inevitable losses of becoming a soldier: the loss of his identity as an artist, the loss of his sanity, and the loss of certainty on his opinions toward the war and of Germany.
This portrait would go on to be exhibited in the “Degenerate Art” exhibition organized by the National Socialists party in 1937. It was one of 32 works by Kirchner in the exhibition, which was organized to steer the German public away from what they saw as “art of decay” and provide examples of the realist, academic work preferred by the new regime. Works by other German Expressionists such as
Oskar Kokoschka
,
Max Beckmann
, and
Emil Nolde
were also included as examples of moral decline. 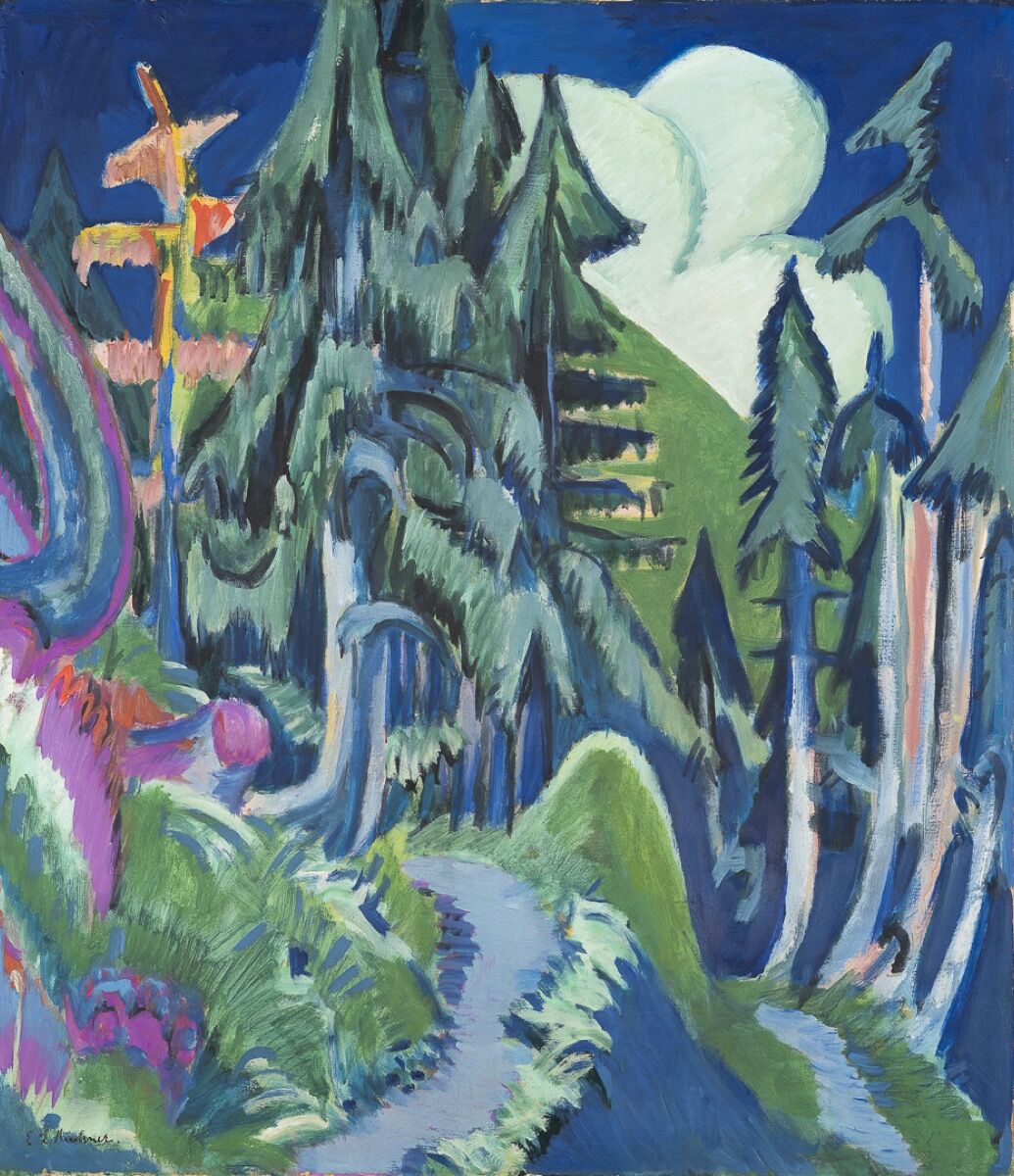 After years of treatment, Kirchner settled full-time in Davos, Switzerland, in 1918. He largely avoided metropolitan Davos, instead communing with the farmers who surrounded his home in the valley. Although the atmosphere was far less frenzied than that of Dresden or Berlin, Kirchner hosted dance parties and gatherings at his home (he was the only owner of a gramophone in the area). He eventually found artistic partnerships in a tapestry weaver named Lise Gujer and a dancer named Nina Hard.
In Davos, Kirchner’s early experimentation with decorative and applied arts from his time at Dresden’s Technical College comes full-circle in his collaboration with Gujer. Around 1922, the pair began working together to create epic tapestries such as Cattle Drive into the Alps (1926). Kirchner’s involvement in these tapestries, along with the inspiring alpine light, would inform the landscapes he painted in Davos. The mountainous scenes he created took on a tapestry-like quality—the luminescent canvases show large planes of color mixed with smaller, interwoven details throughout.
With Kirchner’s relocation came different scenery, and a new host of colors depicted in his art. Works such as Mountain Forest (1918–20) are no less vibrant than his self-portraiture or paintings of Berlin nightlife, but the palette is cooler and perhaps more limited in scope. As Lloyd writes in her essay, “Just as stage spotlights lit the cabaret subjects that Kirchner painted in his Dresden years, the moon above the Alps in Davos acts as nature’s own spotlight, dramatizing and intensifying the colors that haunt the artist’s imagination.”
Sarah Dotson is Artsy’s Managing Editor.
Related Stories 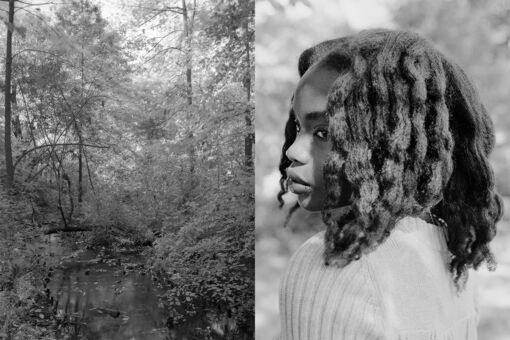