Last Thursday evening, the Whitney Museum held a private reception for members to celebrate the opening of its 78th biennial. As the party ensued, images of the biennial’s artworks surfaced on social media sites, and the 24-year-old, emerging black artist Parker Bright came across a painting by the white artist
Dana Schutz
.
The painting, Open Casket (2016), shows Emmett Till, the 14-year-old African-American boy who was tortured and lynched by two white men in Mississippi in 1955 for reportedly flirting with Carolyn Bryant, a white store clerk. Till’s murderers were promptly acquitted. (Earlier this year, Carolyn Bryant admitted to fabricating the story and providing false testimony during the murder trial.)
As the 2017 Whitney Biennial opened to the public the day after the reception, Parker walked into the museum’s fifth-floor galleries wearing a shirt that read, “Black Death Spectacle,” and stood in front of Schutz’s painting, blocking it from view for several hours.
“It is very important to keep in mind…that there is a divide between what the public perceives and what the curation intends to be perceived by the public,” wrote Bright in a letter after his protest.
“With that in mind,” he went on, “Dana Schutz’s Open Casket depicting Emmett Till’s *already mutilated face finds itself within a negative space, one that may start a conversation but it does not do justice, nor shines a new light on an issue that still pervades (THE ONE OF BLACK AMERICANS BEING KILLED BY THE HANDS OF WHITE SUPREMACY), especially from my own perspective as an African American and artist.”
Open Casket and the resulting protest have set off a firestorm. On Friday, the artist Pastiche Lumumba hung a banner from the High Line balcony, outside of the museum, that read: “The white woman whose lies got Emmett Till lynched is still alive in 2017. Feel old yet?”
Hannah Black, a Berlin-based writer and artist who completed the Whitney Independent Study Program in 2014, published an open letter online, which has since been removed, calling for the Whitney “to remove Dana Schutz’s painting Open Casket and with the urgent recommendation that the painting be destroyed and not entered into any market or museum.”
It was initially signed by artists and museum professionals—both black and white—but after consideration, the white cosigners were removed. (Black declined a request for interview, and when I reached out to the Whitney and Schutz’s gallery, each said it was the other’s responsibility to field press requests.) Parker, who says he does not agree with any destruction of art, nonetheless signed Black’s letter as an act of solidarity.
The biennial’s curators, Chris Lew and Mia Locks, chimed in too. “As curators of this exhibition we believe in providing a museum platform for artists to explore these critical issues,” they wrote. Curator and writer Aria Dean, who also protested the work, called Lew and Locks’s response “disingenuous” and “hollow” in a response shared by Black on Facebook. Parker met with the curators, he told me, to ask for a face-to-face meeting with Schutz. “I think they completely understood where I was coming from,” he said. 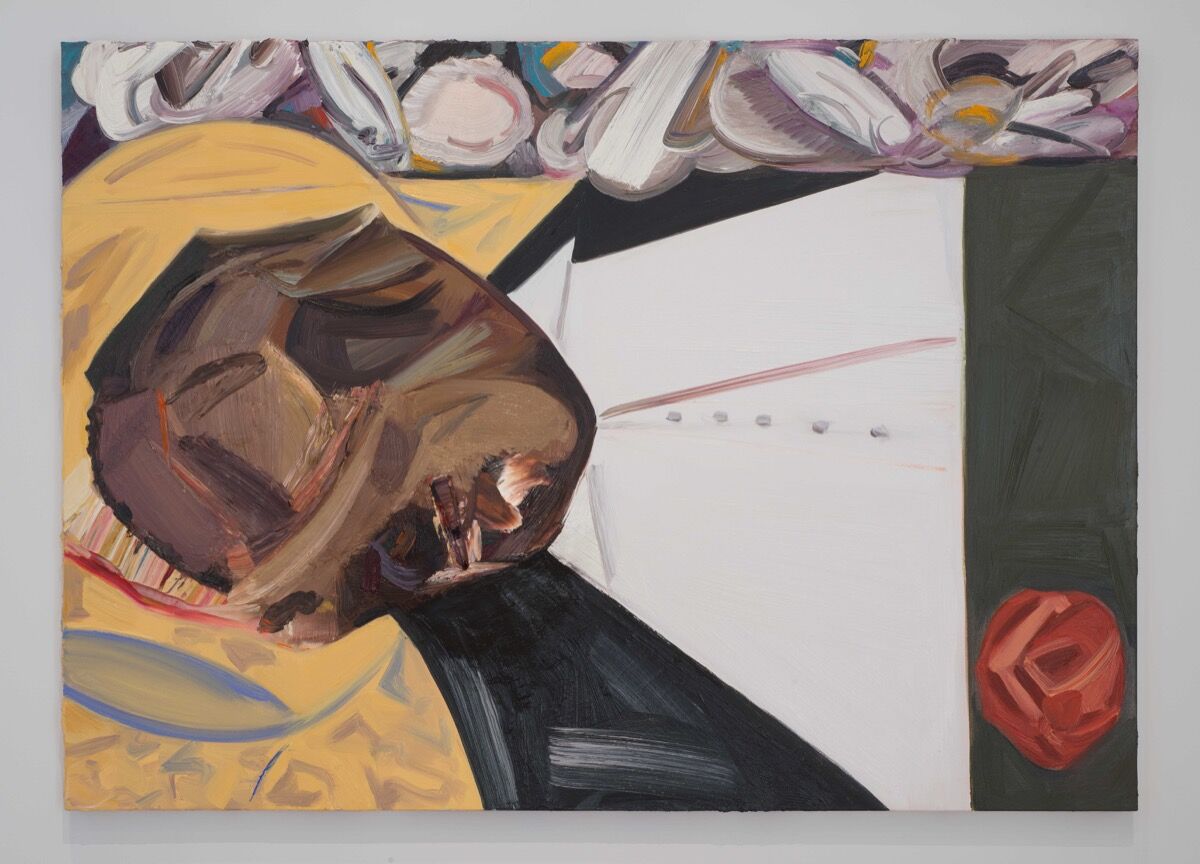 And a statement soon came from the artist herself. In a letter published in The Guardian, Schutz wrote, “I don’t know what it is like to be black in America, but I do know what it is like to be a mother. Emmett was Mamie Till’s only son. The thought of anything happening to your child is beyond comprehension.”
Schutz also stated that the painting will not be for sale. The career bump that comes from being selected to show in the biennial, however, suggests that she may well still enjoy financial rewards as a result of her inclusion in the exhibition.
The controversy surrounding this work is, at its core, about the failure of the art world to truly represent black humanity, despite its recent insistence on “diversity.” The issue is deeply rooted in the American experience, and the failure of our institutions—governmental, cultural, and so on—to correct this country’s original sin and the discrimination and violence against black Americans that continues today.
If the Whitney and other museums are committed to inclusion, then they must admit that their roles in the erasure and suppression of blackness from visual culture informs every painting of a black body that hangs on their walls. Taking responsibility for that history means properly contextualizing sensitive works that they decide to mount in their exhibitions.
In the discourse surrounding the recent, wonderful retrospective of
Kerry James Marshall
’s work at the Met Breuer, rarely did I hear the show spoken about in the context of the Met’s historic exclusion of black artists from its galleries. Nor did I hear the exhibition tied to a much larger conversation that began with the Met’s 1969 disgrace, “Harlem on My Mind,” an exhibition that led to black artists like
Benny Andrews
,
Romare Bearden
, and
Norman Lewis
protesting on its steps.
It was equally stunning and demoralizing to see, during the opening of MoMA’s recently mounted exhibition, “Unfinished Conversations: New Work from the Collection,” that works by
John Akomfrah
,
Samuel Fosso
, and
Lynette Yiadom-Boakye
were not already included in their collection. If museums are serious about inclusion, then it must become a part of their missions, collecting practices, staffing, and programming.
In the context of American culture right now, it seems particularly problematic for Schutz, in her most political work yet, to use the black body as a symbol to communicate sympathy and protest racial violence. This is a country, we should remember, in which 53 percent of white women voted for Donald Trump, who for many represents a continuation of the policies and actions that marginalize black Americans.
We see no end of images showing the victims of recent lynchings by police officers, circulated as they are on social media sites, the objects of spectacle and consumption, as Parker rightly noted. What we rarely see, however, are depictions of the white Americans who have committed acts of violence against black bodies.
Where are the images of Till’s murderers? Why aren’t their names and faces etched into the soul of this nation? Why didn’t Schutz paint Carolyn Bryant in order to interrogate race in America? Or the 53 percent of white women who voted for white supremacy? 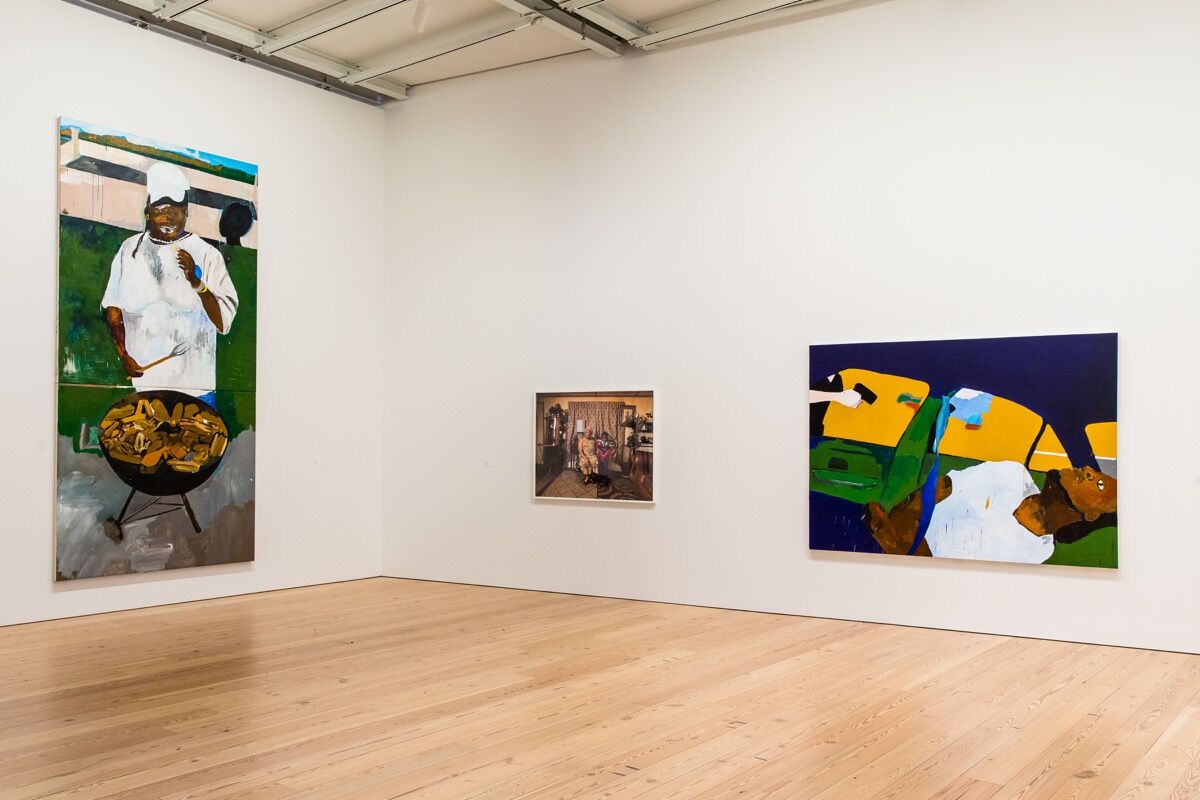 Advertisement
Another work in the biennial that explores racial violence, the black painter
Henry Taylor
’s THE TIMES THAY AINT A CHANGING, FAST ENOUGH (2016), has also been drawn into the controversy. Included on the Whitney’s sixth-floor gallery, the painting shows Philando Castile, a black man, lying dead in his car from seven bullets fired by a Minnesota police officer. Castile’s murder was famously live-streamed on Facebook by his girlfriend, Diamond Reynolds. The video has been viewed at least 5.4 million times.
A smaller group of black artists and museum professionals have expressed displeasure with Taylor, seeing his painting as a means to “profit” from black death. A sculptor and portrait painter, Taylor has spent his career representing mundane scenes of black life, and it was all the more powerful and chilling to see the artist work the canvas to show how black death is a common reality for so many black boys and men, like him and me. As with the call to destroy Schutz’s painting, the arguments around Taylor’s depiction of Castile ring hollow—at least for this writer.
But the discourse these works have generated points to how, too often, contemporary black and white artists fail to represent the black figure as anything other than an ideological cause. As David Joselit writes in his essay “Material Witness,” regarding the video of Eric Garner being choked to death by a Staten Island police officer, and portrayals of blackness more broadly: “We need to be more skeptical of the ideological promises of representation.”
Fundamentally, artists can and should express whatever they feel compelled to, and the public, like Black, Parker, and many others, has every right to contest what they create. But to encourage censorship engages in the very same processes of erasure that have long denied black artists a place in museums and suppressed black experience in society at large.
As the performance artist
Clifford Owens
wrote in response to the calls for decommissioning Schutz’s art: “Feelings are not always facts.” That may be so, but the display of Schutz’s painting for the duration of the 2017 Whitney Biennial and the call for its removal and destruction are both gestures that have consequences.
Antwaun Sargent

On the morning of Thursday, March 23rd, a number of publications received an “open letter” from someone claiming to be Dana Schutz. Within the letter, “the artist” called for the work to be removed from display in the 2017 Whitney Biennial. Shortly after the letter was circulated, the Whitney Museum confirmed that the letter was fake.
Related Stories