N. C. Wyeth, The Lobsterman (The Doryman), 1944. © The Metropolitan Museum of Art / Art Resource, NY. Courtesy of the Brandywine River Museum of Art.

Book lovers of a certain age may know
N.C. Wyeth
for his celebrated Scribner’s Classics illustrations for tales like King Arthur and Treasure Island, while those of a generation no longer with us might have been familiar with his hand-painted advertisements of products such as Winchester rifles and Cream of Wheat. The rest of us most likely think of him as the patriarch of art-historical royalty—a family made most famous through Wyeth’s son
Andrew Wyeth
, a near-mythic figure in American painting.
Movement-filled, highly realistic, and meticulously detailed, N.C. Wyeth’s iconic illustrations came to define what characters like Long John Silver and Merlin looked like in the public imagination. A love for the American West (despite a life spent living in the Northeast) and a reverence for the
Old Masters
shine through in his work. Though he forged a prolific career as an advertiser and illustrator, the elder Wyeth’s true ambitions always lay in the non-commercial fine arts. 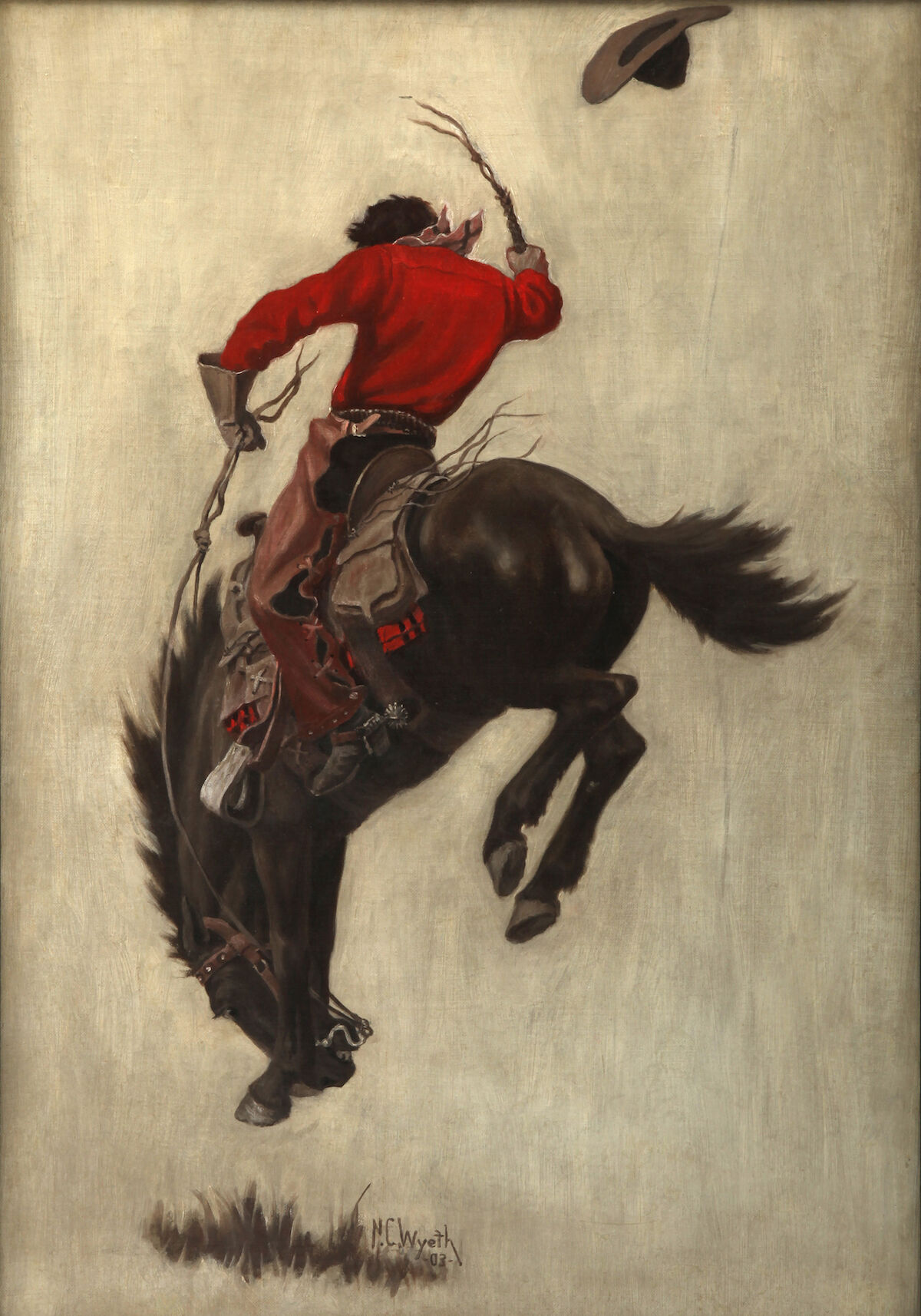 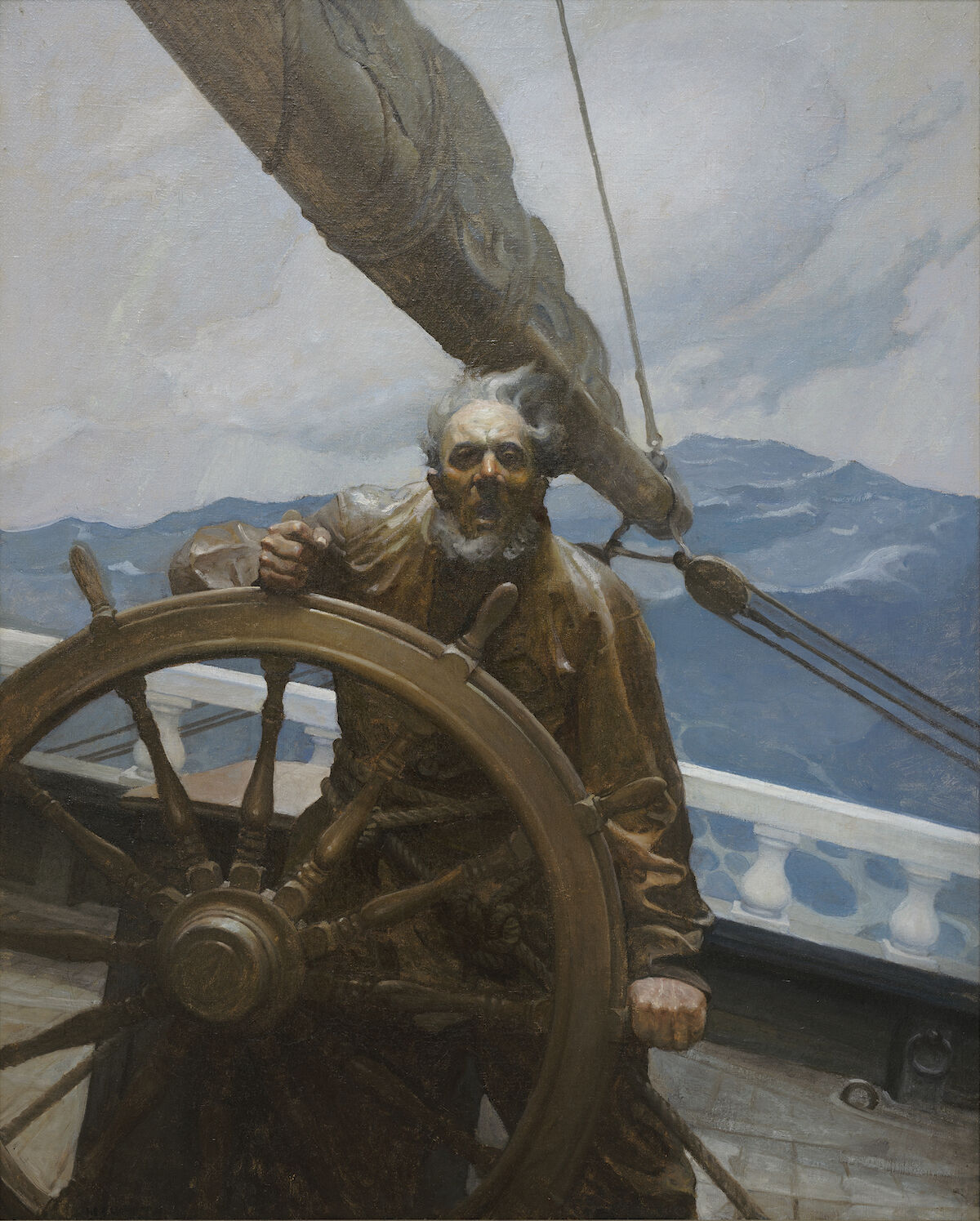 “N.C. Wyeth: New Perspectives,” an exhibition at the Brandywine River Museum of Art in Chadds Ford, Pennsylvania, where he lived and worked, hopes to rewrite the narrative of the historic father figure. It’s one of the few shows ever to celebrate him independent of his family or colleagues, and it explores the artist’s entire oeuvre, with an emphasis on his lesser-celebrated paintings.
N.C. Wyeth was a fascinating and highly skilled painter, but to look at his body of work removed from the legacy of his son Andrew is a near-impossible feat. At the same time, once one learns about N.C., to look at Andrew’s storied career removed from the influences of his father becomes equally challenging. Both were narrative painters whose rural images are uniquely American. As an adult, Andrew lived just down the road from the home that his father built, and so they spent their lives rendering the same terrain. 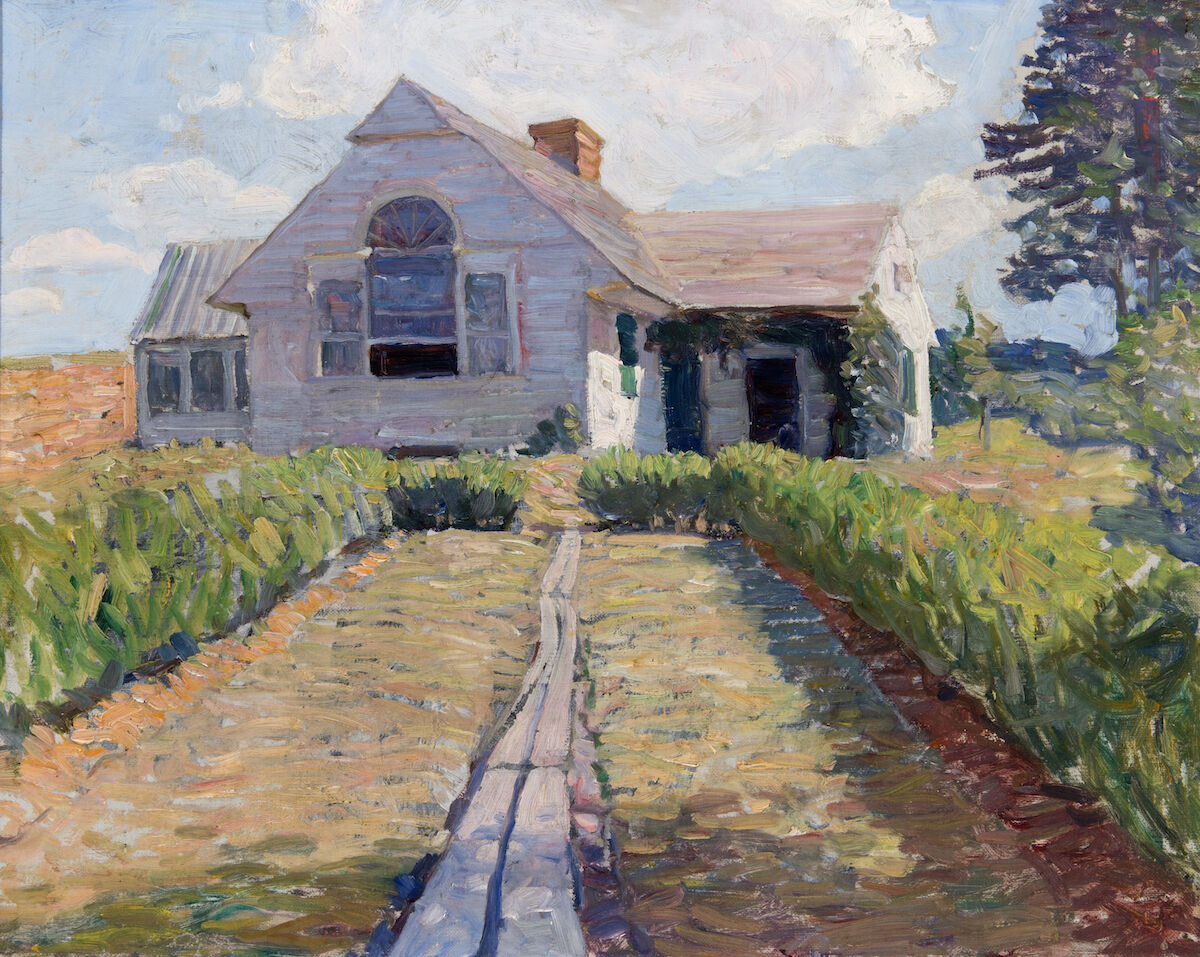 Advertisement
As the show’s co-curator Christine Podmaniczky explained, N.C. struggled with being defined as merely an illustrator. “He fell into illustrating after the success of his Treasure Island commissions,” she said. “Despite his urge to give up illustration and concentrate on painting, he was not going to do that because he had a family to support.”
N.C. mentored Andrew, who was homeschooled, and rigorously taught him how to paint. They both learned how to make tempera by mixing pigments, water, and egg yolks from
Peter Hurd
, who was married to N.C.’s daughter,
Henriette Wyeth
, who was also an artist. While N.C. didn’t have the temperament for a fast-drying, unforgiving material like tempera, Andrew stuck with it for the rest of his life, more than likely avoiding oils so his work would never be in direct competition with his father’s. (It’s said that Andrew and his wife, Betsy, always greeted their guests with fresh meringue, so as not to waste the egg whites.) 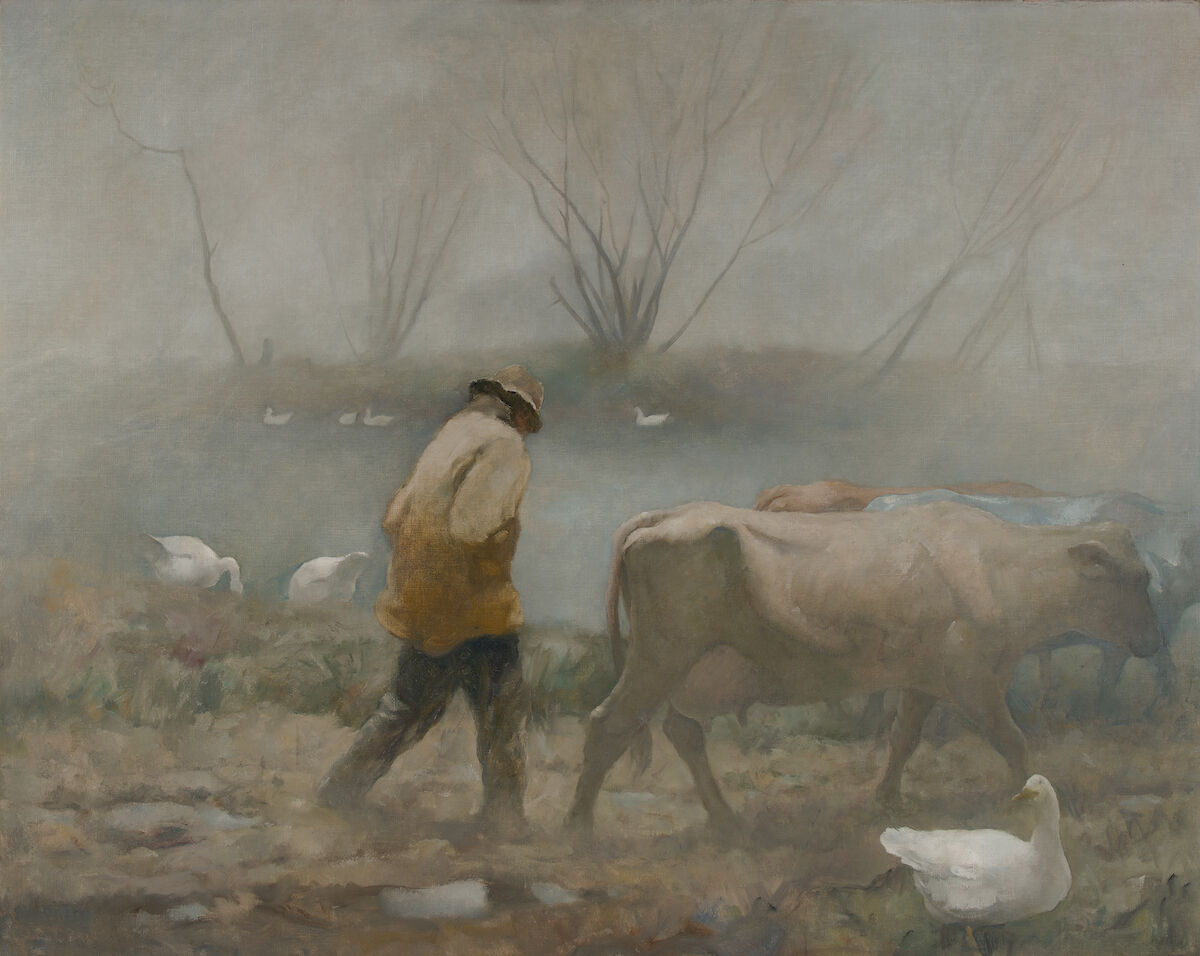 N.C. Wyeth’s first major solo exhibition was in 1939, when he was 57, at the New York gallery Macbeth. Andrew had already had two solo exhibitions there, one earlier that year and another in 1937. Both of Andrew’s shows sold out entirely, while only two paintings from his father’s show sold at all. Like much of his commercial work, N.C.’s paintings were traditional for the time and slightly nostalgic. Rooted in the beauty and melancholy of the American landscape, they were more akin to the
Post-Impressionists
and
American Realists
than any modern movement.
Publicity from N.C.’s show, however, focused far less on his work and far more on the family dynamic. “While you could be ecstatic for the success that your son or daughter is finding,” Podmaniczky mused, “there could also be sadness that your own career didn’t go as planned.” A photograph from the opening shows the family standing before his work, their smiling faces and huddled frames completely obstructing the paintings behind them. 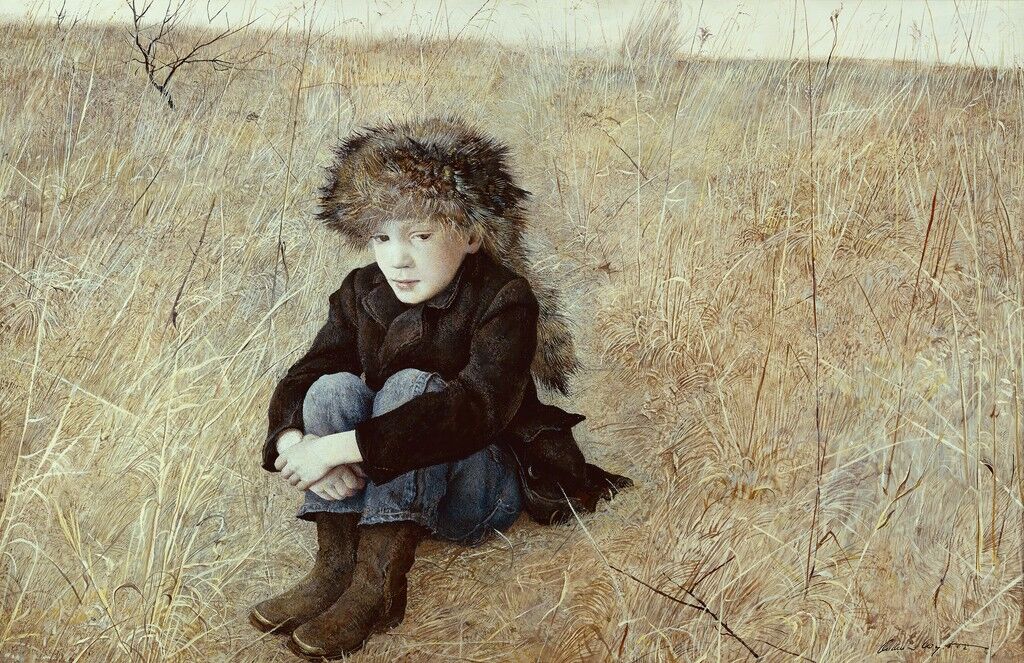 Andrew Wyeth
Faraway, 1952
"Wyeth: Andrew and Jamie in the Studio" at Museo Thyssen-Bornemisza, Madrid
A few quiet years later, on October 19, 1945, N.C. and his son Nathaniel’s three-year-old, Newell, were sitting in their stopped car on a railroad track, watching a farmer and his wife shuck corn, when a train struck their vehicle, killing them both. N.C. had been working on a mural commission at the time of his death, which Andrew finished on his behalf.
While N.C. had painted Andrew as a young boy, Andrew never painted his father, a fact he came to regret after N.C.’s untimely death. Andrew did not repeat the mistake with his own son
Jamie Wyeth
, who also went on to become an artist. Andrew’s Faraway (1952) shows Jamie huddled in a field and wearing a coonskin cap, while Jamie’s 1969 Portrait of Andrew Wyeth shows his father, aging and somber against a black background. 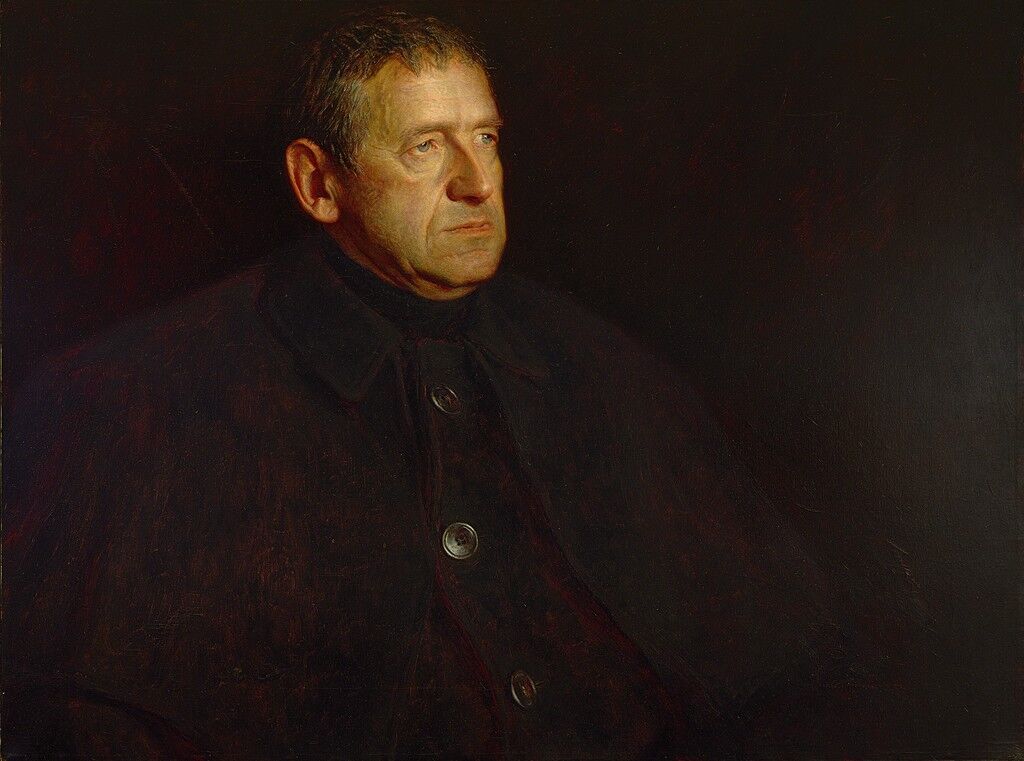 Jamie Wyeth
Portrait of Andrew Wyeth, 1969
"Wyeth: Andrew and Jamie in the Studio" at Museo Thyssen-Bornemisza, Madrid
Near N.C. and Andrew’s properties was Kuerner Hill—a wide, sloping rise on the adjacent farm belonging to the Kuerner family. Andrew had spent much of his childhood playing on this ground, and the train track on which his father died ran right through it. After N.C.’s death, Kuerner Hill became one of the great motifs of Andrew’s paintings, standing in for the father who he never had the chance to paint. Andrew would say that the hill recalled his late father’s breathing chest. 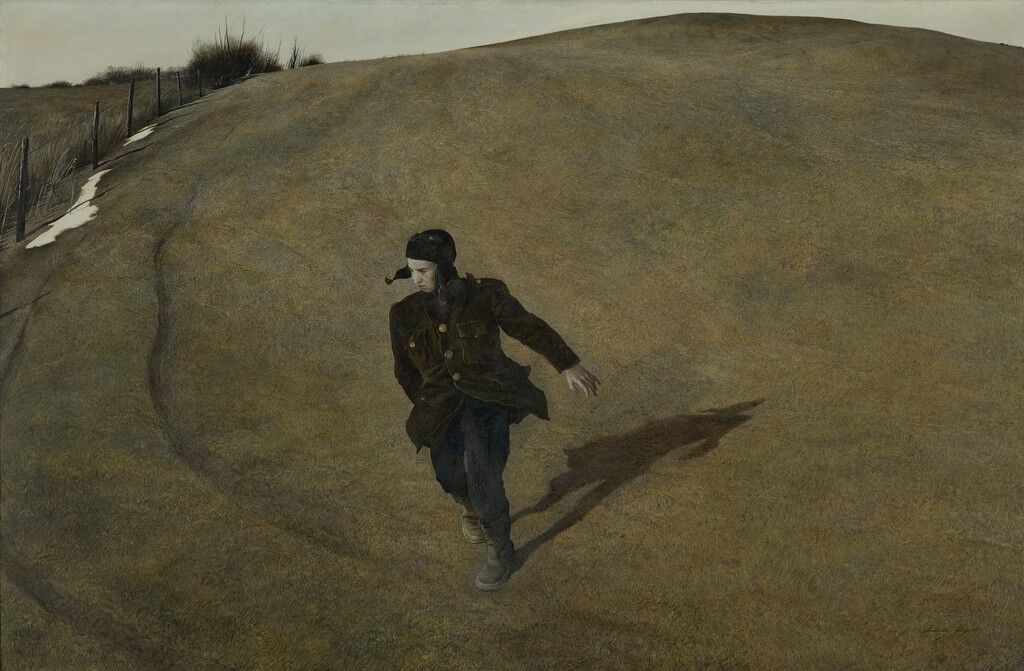 Andrew Wyeth
Winter, 1946
Seattle Art Museum
One of the first paintings that Andrew completed after his death was Winter 1946 (1946), a melancholy work in earth tones, depicting a lone man descending the hill. Christina’s World (1948) is Andrew’s most famous painting that features this landscape. In this way, father and son were able to remain in dialogue as Andrew returned to this symbolic place again and again, following the path his father laid out for him.
Wallace Ludel
Correction: An earlier version of this story misstated the title of the N.C. Wyeth show. The show this article discusses is called “N. C. Wyeth: New Perspectives” not “N.C. Wyeth: A Personal Perspective,” which is the name of another ongoing exhibition at the Brandywine River Museum of Art. The text has been updated to reflect this change.
Related Stories

The Controversial Story behind Andrew Wyeth’s Most Famous Painting 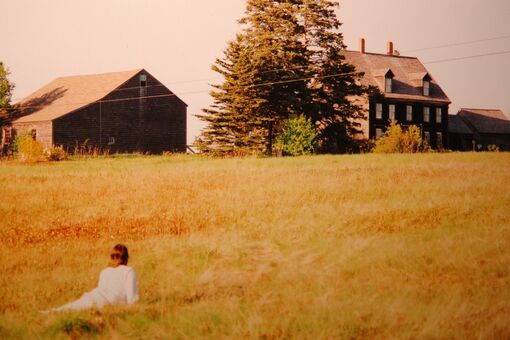 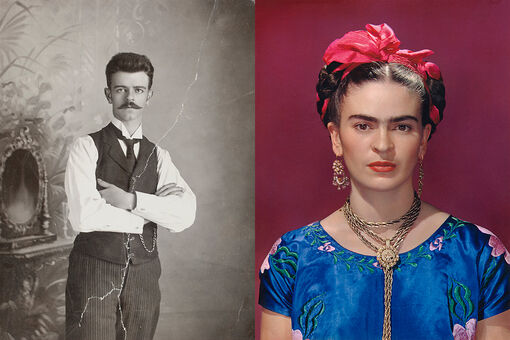