Up and Coming: Clara Ianni’s Bullet-Ridden Sculptures Remember the Violence that Modernism Forgot There is a certain silence in the work of
Clara Ianni
—not a still, removed kind of silence, but a rather tense one, like a pregnant pause before a storm erupts. Her work embodies a latent state of violence that creeps to the surface every now and with polished manners rather than aggression. We meet in a warehouse in the south side of São Paulo as night falls. She shares this space with a group of fellow artists whose works, or fragments of them, are strewn about the floor. Hers is a desk in the corner, on which sits a MacBook Air and nothing else. The sparse surroundings look like an old factory gutted and devoid of everything but a hard concrete floor and whitewashed walls. They match her work—bold and brash in content, understated in form.
Still Life or Study for Vanishing Point was the first of her pieces to really strike me. Nine sheets of steel hang on the wall grouped in three parallel rows, three plaques in each of them, forming a grid. One could mistake it for some kind of posthumous
Donald Judd
, except it’s pierced by bullets. When she first did this piece four years ago at the Museu da Pampulha, in Belo Horizonte, local police officers were called in to shoot at these skins of metal. Ianni just installed the same piece at the KW Institute for Contemporary Art in Berlin, asking German police contribute to what she calls “an archeology of ammunition.” 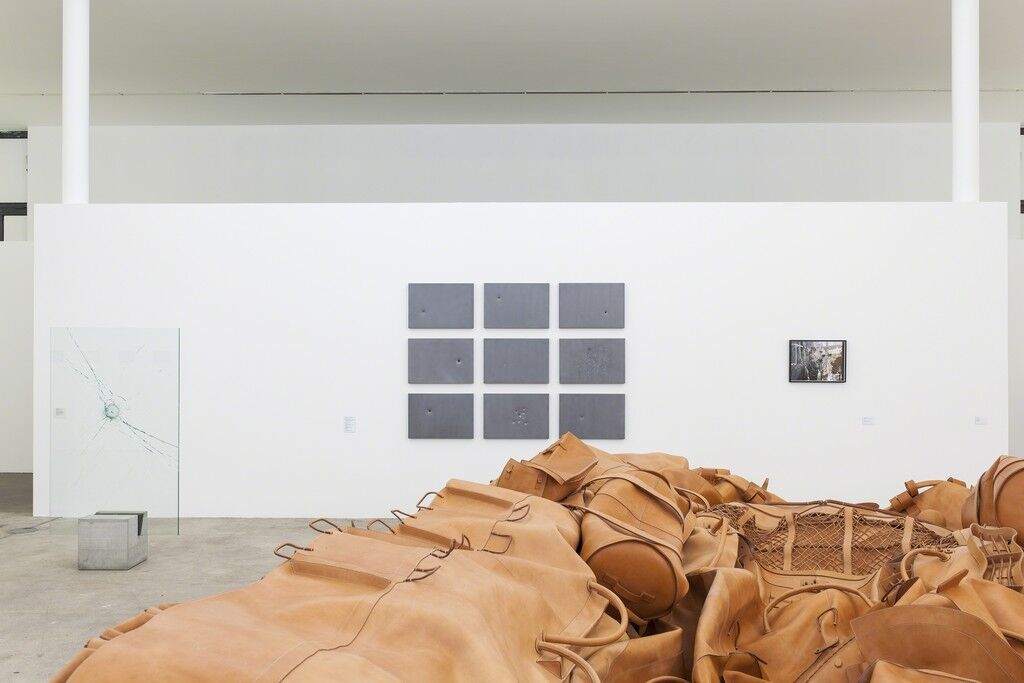 Installation view of Clara Ianni, ‘Still Life or Study for Vanishing Point,’ in “Fire and Forget. On Violence” at KW Institute for Contemporary Art, Berlin. 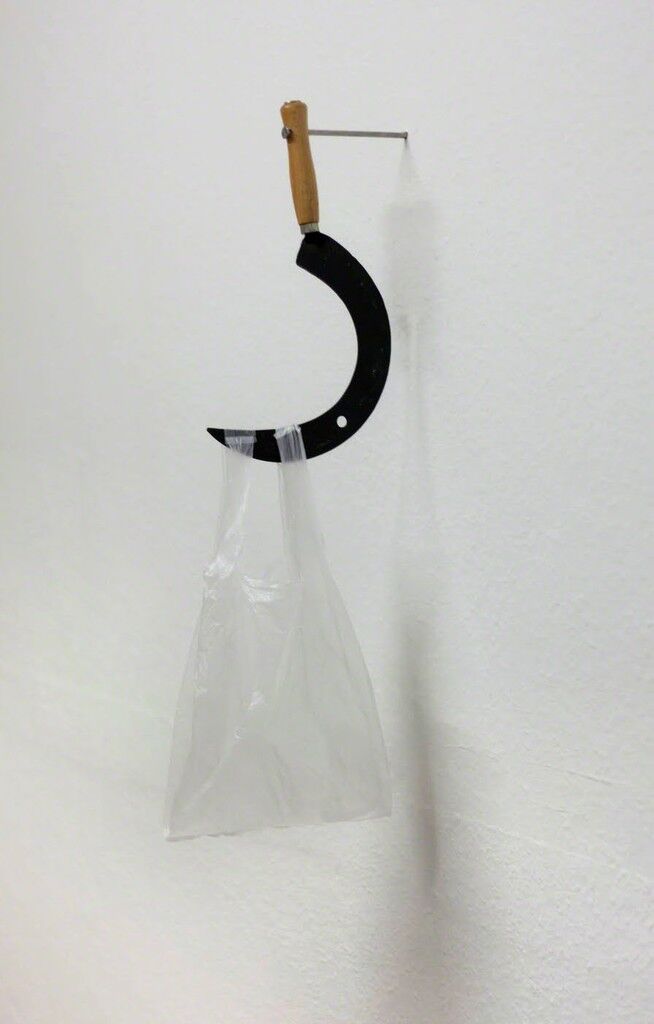 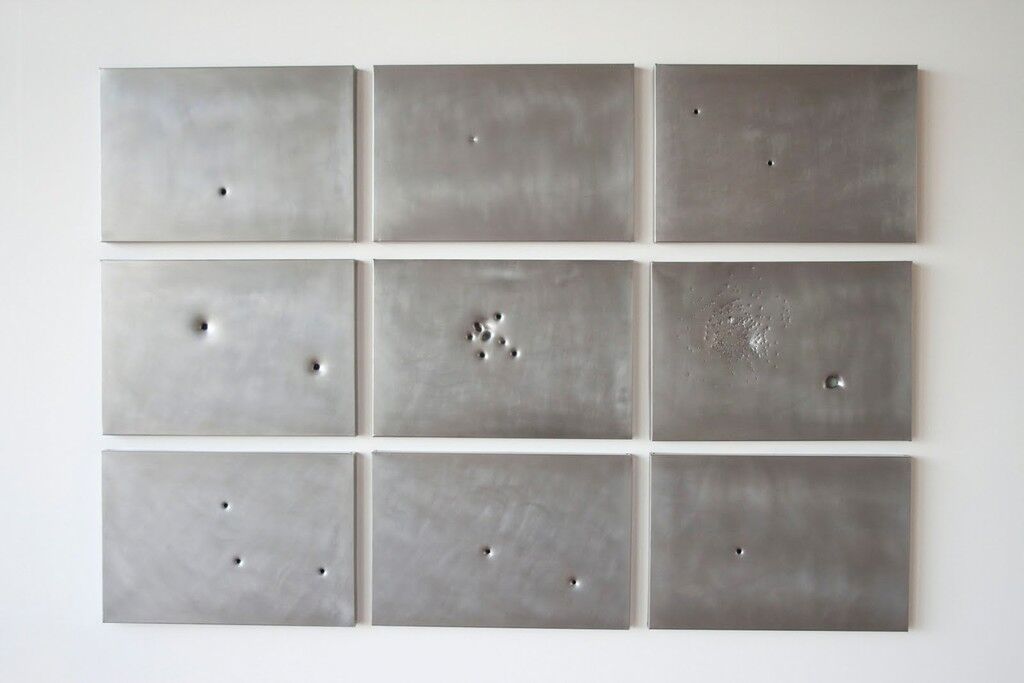 Clara Ianni
Natureza Morta ou estudo para Ponto-de-fuga (Still Life or Study for Vanishing Point), 2011
Vermelho
“I recognize there’s a dialogue here with minimalist tradition because of this work’s serial quality, even though that was a movement that began in the United States led mostly by white men,” she says. “But this also has to do with Brazilian modernism and its constructivist structures and my desire to question traditional models of representation, with grids and vanishing points, something often mediated by optical devices, be they photographic cameras or lenses mounted on weapons. Our real life experience just doesn’t fit in these models.”
In a way, this particular piece juxtaposes two of Ianni’s basic drives in the construction of her work: a powerful study on violence and a relentless critique of how the modernist tradition, especially in Brazil, appears to be anchored on amnesiac grounds. It’s as though progress and development depended on a selective kind of memory, one that erases injustices to celebrate monuments erected in their aftermath no matter how brutal the process behind it all. “There has always been a positivist, Darwinian discourse behind the idea of progress here, but this is a discourse that ignores all contradictions in its wake,” says the artist. “Brazil instituted a kind of modernity incapable of revealing the violent history behind the building of this nation. In order to see progress, you must forget there were massacres and scandals, things that repeat themselves as symptoms in our public life.” Ianni often refers to this as a “systematic denial of the past.” “Fire and Forget,” the show she now takes part in at KW, seems steeped in this very logic: a military strategy predicated on smart weapons that can be programmed to hit a target and then carry out their mission unmonitored and an obliteration of all evidence, so no steps can be retraced nor tracks uncovered. Ianni’s work goes against the grain, establishing itself as an effort to remember no matter how cruel the past. “My idea is to work on gestures that have no image, everything that lost its image.”
One example of Ianni’s near obsession with unearthing these fragile memories is Free Form, a film in which the voices of both Oscar Niemeyer and Lúcio Costa—the men who designed the country’s new capital Brasília in the 1950s—serve as a soundtrack to close-ups of the city’s architectural drawings, responding to questions about a massacre of workers that occurred just months before the inauguration of Brasília. Both architects claim to know nothing about the episode as black and white images of maps and idealized landscapes drift by on the screen. Costa, the more adamant of the two, says the entire ordeal can be dismissed as “foam,” something of no importance, fruit of the imagination of workers who “have this tendency to romanticize, to give importance to what they did and to make a drama out of something that, if you examine it historically, is minor, limited.” 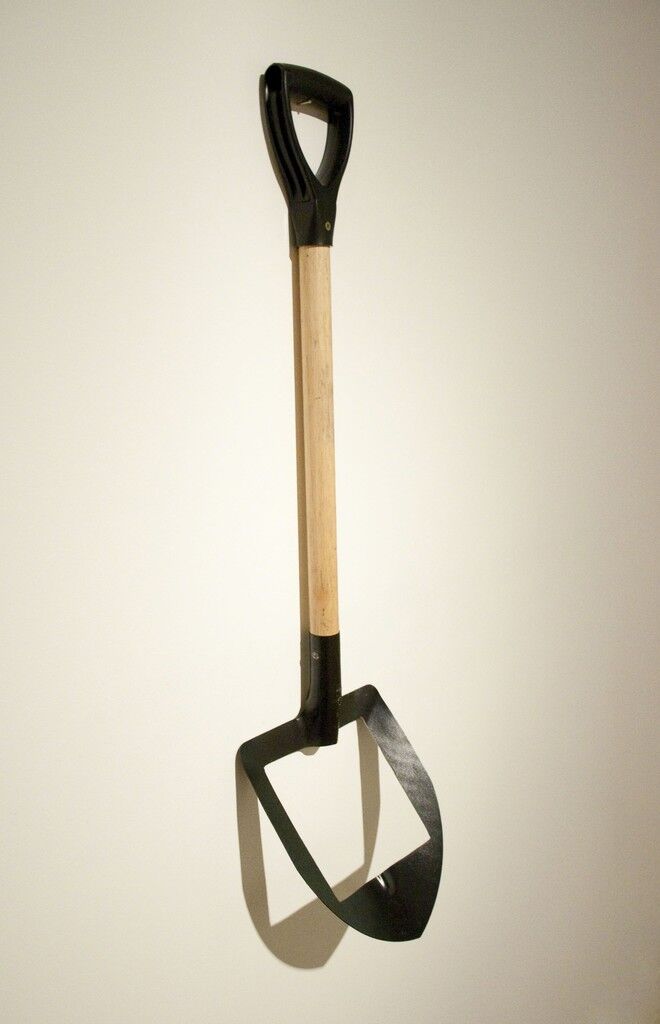 Clara Ianni
Critique of the separation, 2010
Vermelho
Using only the truth, or real statements that claim to have no recollection of well-documented facts, Ianni takes one step further and creates a new, unstable terrain, where shame and its logic of firing and forgetting emerge to the surface only to be blinded by official imagery, the pristine drawings and maps that served as blueprints for the structuring of a spotless new capital.
More explicit is Plea, one of her latest works, shown at the Bienal de São Paulo last year, which creates a mash-up of two historical periods marked by violence that was systematically perpetrated by the state. In order to film Plea, Ianni took Debora Maria da Silva, a mother who lost her son to police violence, to the Perus cemetery in the north of São Paulo. The cemetery contains mass graves that were used by the military dictatorship to bury the bodies of political dissidents and is now used as a burial ground for unidentified corpses of those shot and killed during police operations. Ianni shows da Silva as she walks around the cemetery reciting a discourse against the violence that sent so many to these unmarked graves.
The artist believes the mournful aspect of this piece foreshadows the dark political climate that soon settled in the country after the reelection of president Dilma Rousseff late last year and the ensuing economic crisis. “There seemed to be positive things on the horizon, but everything just crumbled so tragically,” says Ianni. “Our government has entered a neoliberal dynamic and the elite has lost its inhibition to declare itself reactionary.” 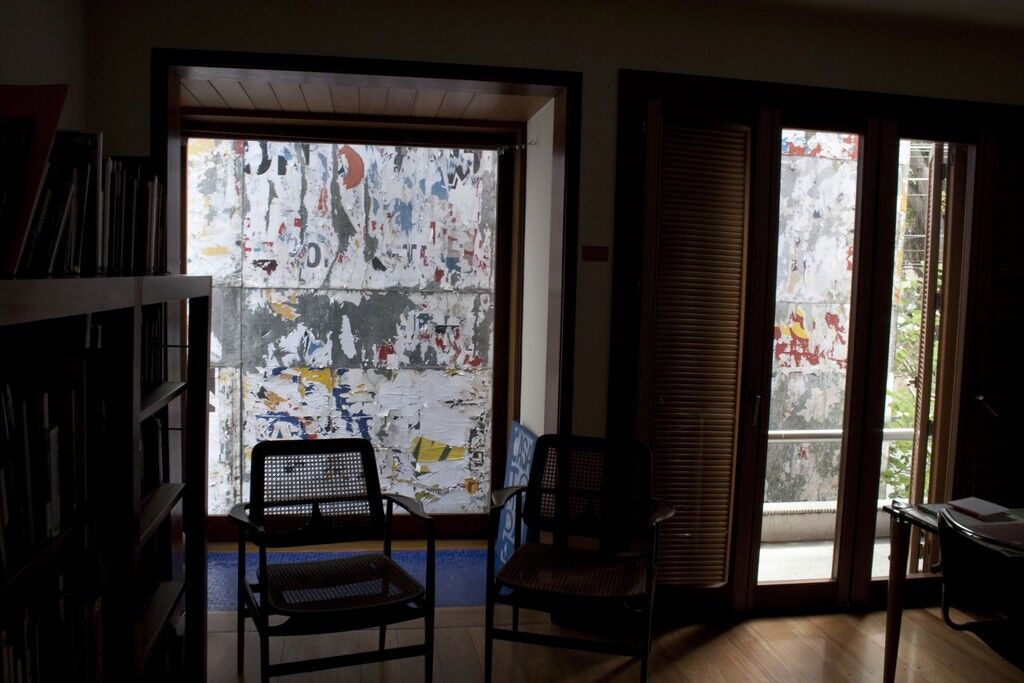 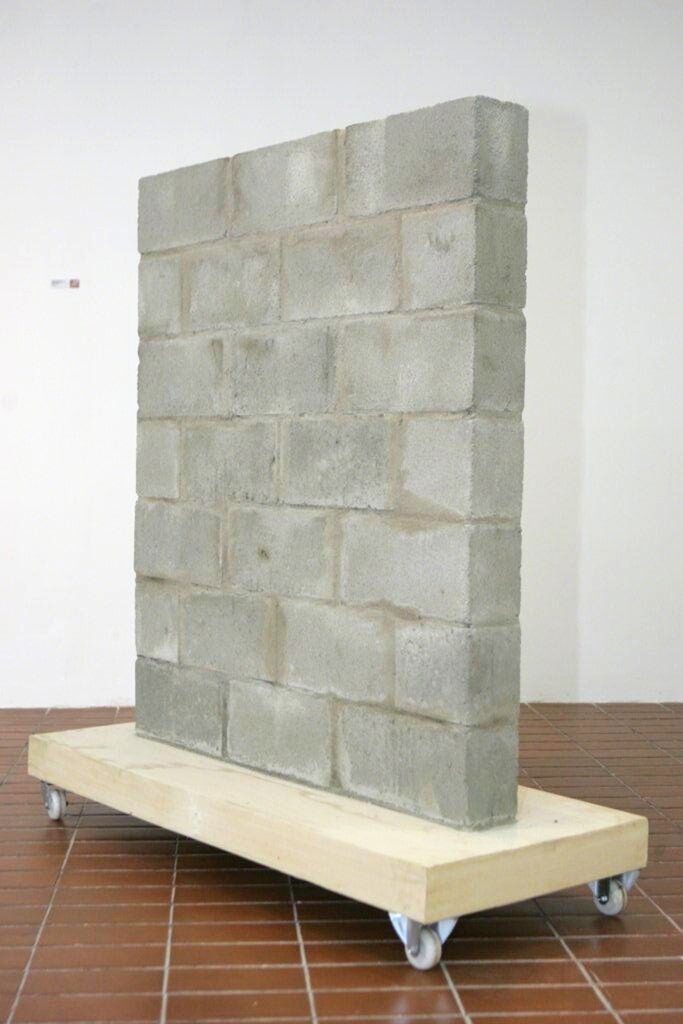 Clara Ianni
from the serie ‘Tactical Volumes’: Object no 1, 2010
Vermelho 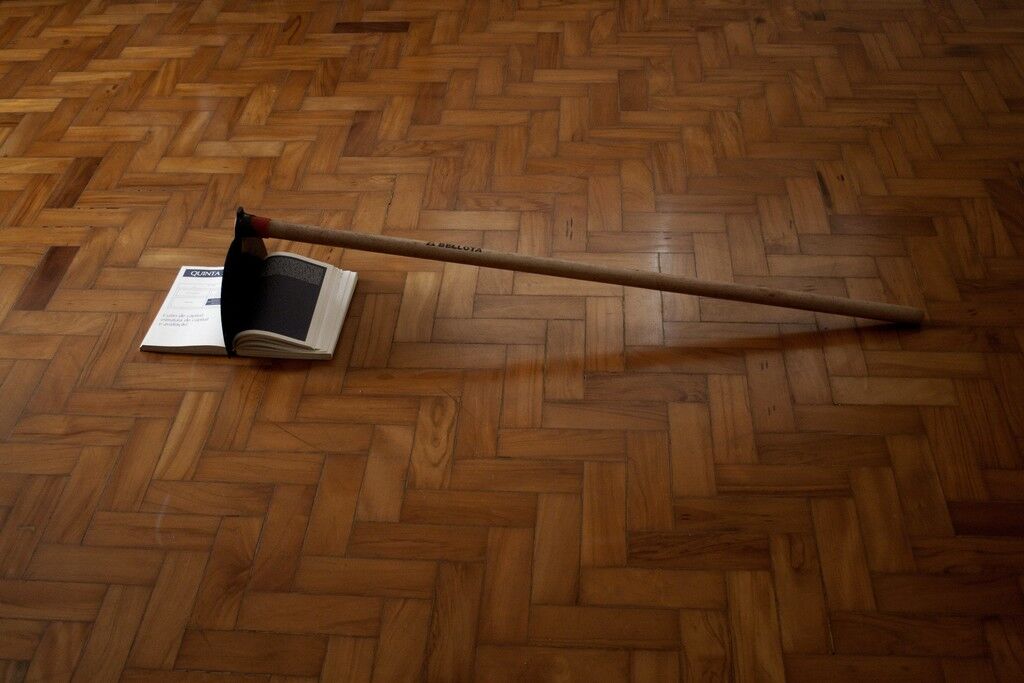 Clara Ianni
Monument, 2010
Vermelho
Her latest work, recently shown at Vermelho gallery in São Paulo, is grounded in this new, negative dynamic. In a logic that resembles some kind of anthropological study, Ianni asks people and their maids to draw on a map the route they travel to go to work as well as the difference in their wages. This data is then transformed in a single line on a sheet of paper, longer when the disparity is bigger and shorter otherwise. “This line in space can be seen as just a shape, a formalist endeavor,” she says. “But it’s really based on something very concrete.” As concrete as the building blocks of this city.