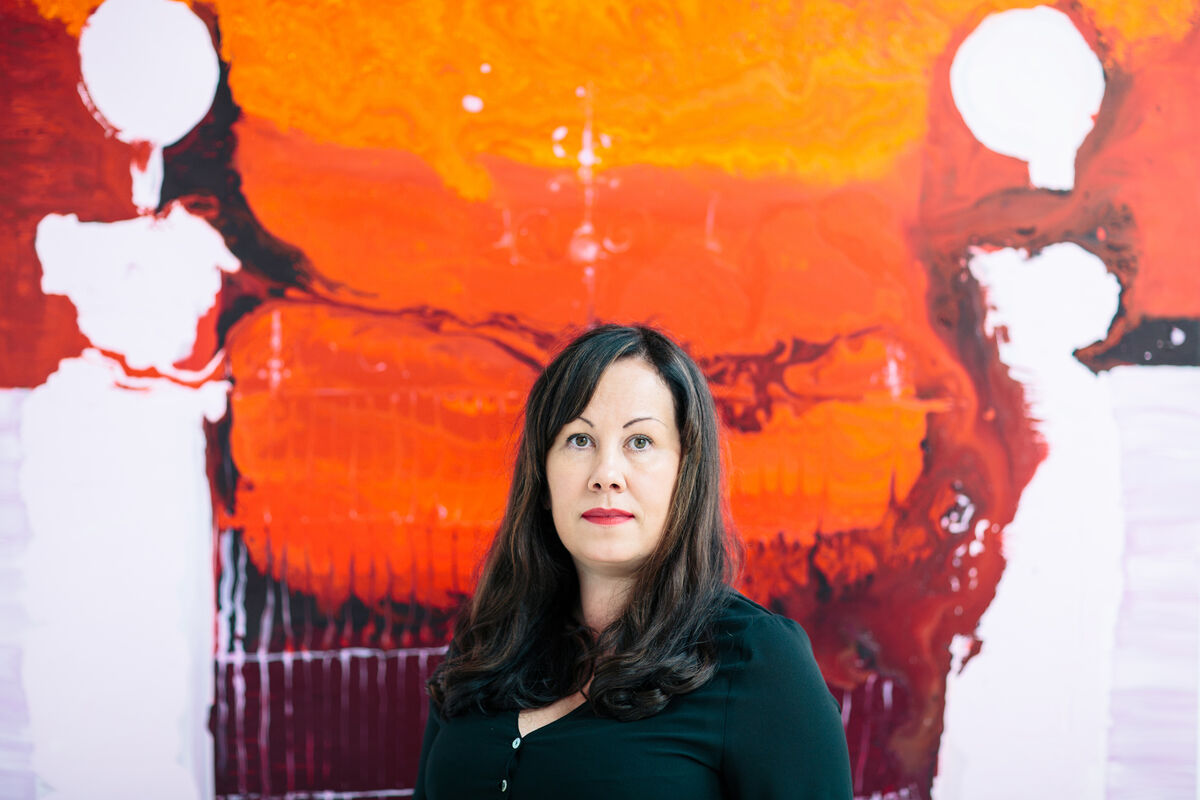 The paintings of Irish artist
Genieve Figgis
share a dark, strange allure with the landscape that surrounds her studio in County Wicklow, Ireland, a short drive from Dublin. Her work brings to my mind a poem by the great Irish writer Seamus Heaney—himself a long-term resident of the county—who in Exposure (1975) imagines himself as a 17th-century Irish soldier. Having “escaped from the massacre” of his forces by the English armies he now wanders through the woods, living wild. It is December in Wicklow, and amidst “the alders dripping,” he has left civilization behind and grown philosophical, “taking protective colouring/ from bole and bark, feeling/ every wind that blows.” Advertisement
Starting out like a straightforward paean to the beauty of nature, Heaney’s poem reveals itself to be a story about Ireland’s turbulent past, and Figgis’s unsettling paintings capture this combination of the picturesque and the violent. They depend for their effect on the dissonance between the pictorial banality of their subject matter—18th-century landscapes, bourgeois group scenes, traditional portraits—and their dreamlike aspect.
Painting from the seclusion of the Irish countryside, Figgis has nonetheless enjoyed a stellar 12 months since her exhibition at New York’s Half Gallery was the subject of rare, fulsome praise from The New York Times’ influential critic Roberta Smith, and her meteoric rise continues with an exhibition of new work at Almine Rech Gallery in London. Possessed of a wicked, unmistakably Irish sense of humor, Figgis’ works ironize our attitudes to conspicuous wealth, land ownership, and social hierarchies by reimagining canonical paintings—commissioned to preserve the glory of their subjects—as nightmarish scenes, suggestive almost of depravity. The Swing After Fragonard (2014), for instance, is what Figgis terms a “cover version” of the French artist
Jean-Honoré Fragonard
’s work partly inspired by the story of a more notorious red velvet swing: the one that American Beaux-Arts architect Stanford White kept in his luxuriously appointed New York apartment, to assist in his seduction of young women. Advertisement
“Art history, architecture, and music stand as documents of previous worlds,” Figgis notes. She was attracted to Fragonard’s painting because it “lures you into an innocent world, a specific moment in pre-revolutionary France.” For Figgis, it felt ripe for reinvention because “we are experiencing a similar moment now…a feeling that something bad could happen at any given moment.” The Swing After Fragonard shares a sensibility with the filmmaking of David Lynch, in which unspoken horror and strangeness hides behind the most mundane facades. The macabre here is similarly thrilling, shot through with an irresistible sense of taboo.
There are parallels to be drawn, too, with other satirists of social breakdown throughout the history of painting. Figgis describes her cover version of
Thomas Gainsborough
’s Mr. & Mrs. Andrews (c.1750) (which she’ll exhibit at Almine Rech) as addressing issues related to land and ownership, and the absurdity of “owning land, standing over it, guarding it.” Indeed, the artist’s portrayal of figures—whether in landscapes, domestic settings, or as portraits—is disconcerting, their blank or frightening expressions suggestive of some darker intent or absence. It creates a sense of uncertainty that complicates our engagement with ostensibly straightforward subjects (one of her paintings seems at first glance to depict a wedding, but is titled Blue Cult). When I ask Figgis whether she understands her work as belonging to the
Gothic
tradition, or consciously exposing a darker undercurrent to everyday life, she frames her interests more broadly. What interests her in the history of art is the “ambiguity” of the documentary process, she says, the fact that every work of art is inflected by the “specific agenda” of its composer, and the historical circumstances in which it was composed. Thus Fragonard’s work gives us an insight into a very specific time and place, while Gainsborough’s embodies contemporary attitudes to landscape, society, and wealth. These are the “documents of previous worlds” that Figgis enjoys picking apart and reconstructing. 2 Images
View Slideshow
Figgis has no doubt that her work has been “influenced by growing up in Ireland, the rules of the Catholic Church, and the politics of the land,” as she says. “I am surrounded by the mountains and sea. It is the most beautiful place to live and I feel very lucky. I am proud to be Irish. The history of the landscape is wonderfully inspiring.” Yet she also positions herself amidst a broader international revival in abstract and figurative painting, citing
Marlene Dumas
,
Cecily Brown
,
John Currin
,
Richard Prince
, and
Dana Schutz
among those who have influenced her. In their work she recognizes a shared preoccupation with “figurative works that were not the traditional likeness of a sitter, but rather revealed the experimental nature of the artist’s journey with the figure.” Indeed, the extraordinary mix in her paintings of very expressionistic marks and tightly controlled gestures, of figurative foregrounds and borderline abstract backdrops, speaks of an experimentalism that belies the work’s traditional-seeming subject matter. Figgis describes her process as a “throw of the dice with the material of paint,” an embrace of chance that has the “power to lead you into unknown territory.” As she describes, “The paintings take hours to make and they are made usually in one sitting. There is no backing out: you trust and have faith that it will work out in the end. I have no idea how it works out, but by instinct and from practice you just know and hope that it will.”
Ben Eastham
Header image: Portrait of Genieve Figgis in her County Wicklow studio by Doreen Kilfeather for Artsy.
Further reading in Art