Up and Coming: Laura Lima’s Performa Commission Plays with the Sociodynamics of a Flock of Hens Portrait of Laura Lima in her Rio de Janeiro studio by Yuri Sardenberg for Artsy.

Much of
Laura Lima
’s production happens outside of her Rio de Janeiro studio. She shapes each piece in relation to the city and venue where it will appear. Even so, her working space in the garage of her home overflows with objects and experiments, which occasionally find their way into the kitchen sink or refrigerator. Whether the current project involves sewing costumes or building an aviary, she is surrounded by her notes and, in her words, “a mess.” While she is at ease with things in transition, she is uncomfortable with categories that neutralize the unfamiliar. Lima, who recently presented a solo booth at FIAC with Rio gallery A Gentil Carioca, and whose upcoming live work at Performa 15 will be her first in the United States, has no use for common labels. Though her work is included in this renowned performance biennial, she does not create “performances.” And though her spectacular interventions are often immersive, they are not “installations.” Her Performa commission, Gala Chickens and Ball (2015), combines two pieces she has staged previously: Gala Chickens (2004/2011), in which a brood of hens festooned with vibrant, faux feather extensions strut inside a specially designed coop; and Ball (2003–4), which invites human visitors to enjoy food, alcohol, and live music, and to adorn themselves with costumes modeled after those in a 16th-century French painting. In this new work, and in many others, Lima considers herself “an artist who is not present.” Instead of performing, she asserts, “I am constructing an atmosphere for others to perform.” Portrait of Laura Lima outside of her Rio de Janeiro studio by Yuri Sardenberg for Artsy.

Advertisement
Lima has resisted performance as a classification since it was first applied to her output in the 1990s and denies any sense “that if we work with human beings, we have to respond to the word performance.” Instead, she maintains that “art can create new words” and has affirmed this statement by generating her own, unpublished glossary. In one of a series of works investigating the body as material, a man and woman are suspended side-by-side in an oversized hammock, which stretches the length of the room. Hair extensions woven into the man’s eyebrows trail down to his lap, and the woman’s pubic hair drapes down to the floor. The work’s title is not a single word or phrase, but a cluster of complex concepts arranged in a formula: Homem=Carne/Mulher=Carne – Pelos + Rede. (Man=Flesh/Woman=Flesh – Hair + Hammock.) (1996/2010). The structure of this equation is concrete, but its components are unstable entities—each could be considered a starting point for infinite philosophical inquiry. In contrast to a traditional lexicon, Lima’s glossary does little to neatly define terms or fix them in place. Portrait of Laura Lima in her Rio de Janeiro studio by Yuri Sardenberg for Artsy.

Engagement with the unknown is a constant in Lima’s practice. Of her work involving non-human creatures, she says that although one might project emotions onto other species, “you never know the truth when you’re dealing with animals.” Lima embraces uncertainties in her process. She creates instructions for realizing each piece, but does not choreograph movements or hold rehearsals. And when it comes time to present a project, she steps back and experiences it with the rest of the public. As both a producer and viewer, Lima acknowledges the limitations implicit in experiencing an immersive work. “When you are in a piece of art, you are not really seeing everything. There is always something that you miss. [Your perspective] depends on the way that you move inside the piece.” A party is like this, too. A single member of the crowd at Gala Chickens and Ball may experience parts of the construction—selecting a snack or trying on a headdress—but will never see the whole. Lima also uses the party format to interrupt any expectation that an art encounter should be austere; she says, “It’s about breaking this idea that you cannot touch a piece of art. . . I want people to have fun.” In both its social approach to form and its generosity of spirit, her work recalls that of a previous generation of Brazilian artists, the
Neo-Concretists
, who countered a trend toward formalism in the 1960s and ’70s through participatory interventions. The movement altered the architecture or the conventions of a space, making routine, normalized behaviors feel unfamiliar. In Lima’s practice, situations that involve physical constraints question the relationship between the body and its surroundings. In Homem=Carne/Mulher=Carne – Puxador Paisagem (Man=Flesh/Woman=Flesh – Puller Landscape) (1999/2013), presented at Museo Universitario Arte Contemporáneo in Mexico City, a man leans forward, throwing his weight into two loops slung over his shoulders, like the straps of a backpack. The taut fetter could be followed around the corner and out the door, through a tree and above a covered walkway. The man was tied to the infrastructure, as if his exertion could move the building. Other works delve into the narrative possibilities of bodies. For To Age (2004), Lima enlisted a team of makeup artists to visually age participants who interacted with the public, applying false, wrinkled flesh to their skin and brushing gray pigment through their hair. The work investigated the effects of appearance on perceptions of self and other, and played with an idea of aging as a kind of mark-making, with soft hues and fine lines. In Lima’s hands, the body is a pliable form, just like a party. Both become a means to explore a basic quality of any interaction: unforeseen things are sure to happen. 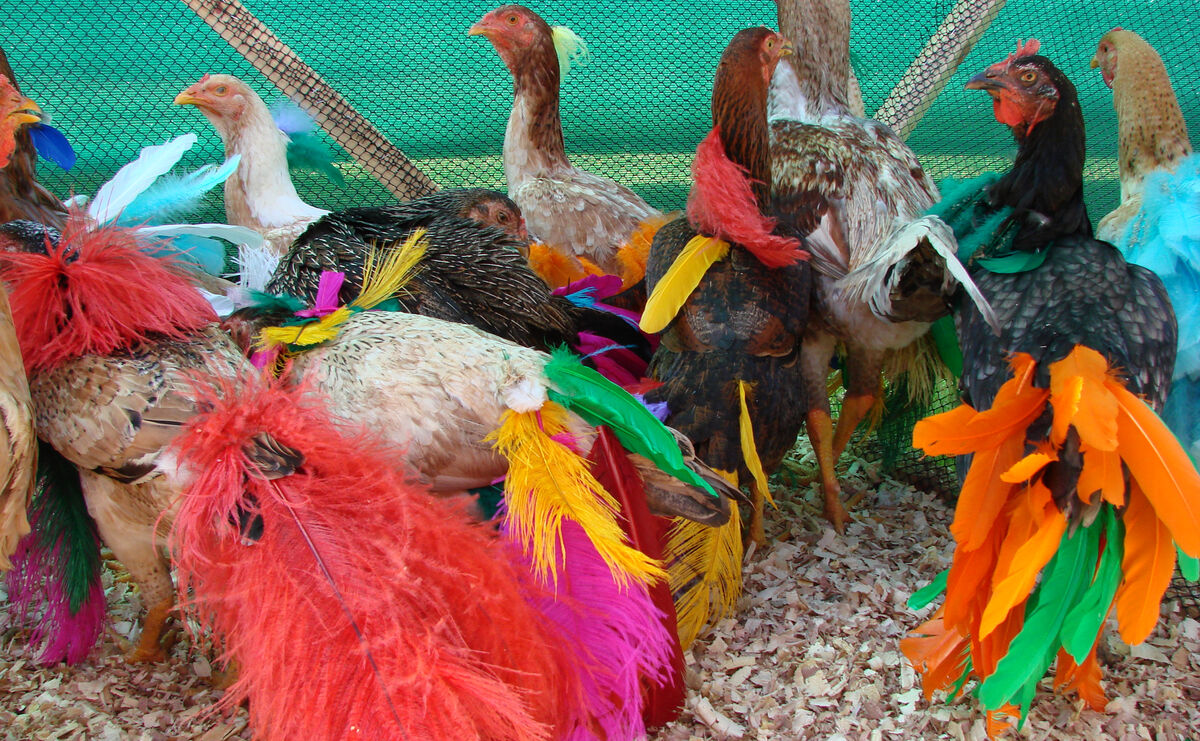 The first time Lima presented Gala Chickens, she realized through hours spent with the birds that the ornamental feathers subtly altered their comportment around one another. Hens showed new signs of attraction to other embellished hens, and roosters rejected all but the ones whose natural brown and white plumage gave way to fuchsia, emerald, and vermillion fringe. The result was unexpected, but Lima has witnessed similar shifts in human participants. Their behavior is different when they find themselves in novel situations, if only briefly. In recombining two projects for Performa, Lima brings their subjects and concerns together in a new context. Faced with the unknowability of other living beings, one option is to turn to categories. Another is to follow Lima’s lead, taking the mess and molding it into a new, strange proposition.