Up and Coming: Meet New Noveta, the Artist Duo Whose Anxiety-Fueled Performances Are Taking the World by Storm 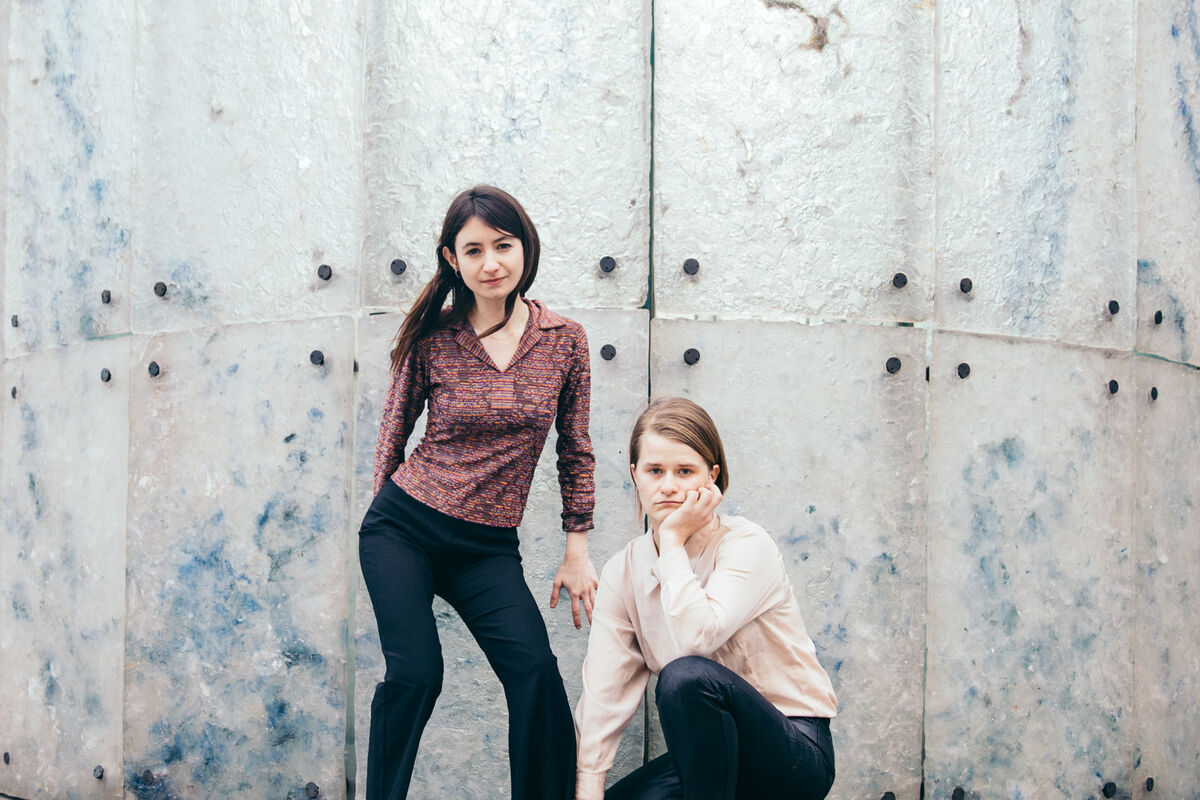 Portrait of Keira Fox and Ellen Freed of New Noveta in London by Kate Berry for Artsy.

On a sunny day last September at Porto, Portugal’s Serralves Foundation, New Noveta—the collaborative performance project of artists Keira Fox and Ellen Freed—took over an expansive gallery space with one of their tumultuous, anxiety-fueled performances. Wrapped in jackets and flowy pants, wearing chunky heels and looks of terror, Fox and Freed entered frantically, running across the room, bursting water balloons, and systematically building an installation of large bamboo poles suspended from ropes. A crowd grew gradually, watching as a scene of struggle, or perhaps survival, unfolded. The artists built up the environment (and later cut it down); ripped each other’s clothes off, stripping down to leotards; and intermittently latched onto one another, crying out wildly—all while a percussive soundtrack, including the artist’s own voices and crashing waves, resonated across the space.
The artists regard the performance (part of Serralves’s 2015 “The Museum as Performance” program), as a milestone in their collaborative career, a moment where they took their practice to a new level. An engrossing concert of performance, sound art, lighting, installation, bespoke costumes, and choreography, the piece is emblematic of what New Noveta has become known for. “It’s similar to a theater production, but we’re not strictly theater or dance and not strictly performance art,” Freed tells me during a Skype call with the duo. “Everything is important, from the lights to the sound to how we enter the room.” And their collaboration extends into a close network of other creatives—for the Serralves performance, the sound piece was composed by musician Seàn Collum, and their costumes were designed by Dean Wellings, Miranda Keyes, and Louis Backhouse. New Noveta during a performance at Sandy Brown, 2016. Photo by Louis Backhouse, courtesy of the artists and Sandy Brown.

In the early days of their collaboration, when they performed in clubs, bars, and festivals in London, audiences didn’t know what to make of New Noveta. “There was a point where people would be aggressive towards us. We’ve been attacked, we’ve had things chucked at us,” Fox and Freed explain. (They tend to speak in tandem.) But times have changed. Nowadays not a month goes by in which the artists aren’t traveling to perform in exhibitions, often in galleries and institutions across Europe, and recently also in Asia.
Their first solo gallery show is on view now at Sandy Brown in Berlin—an exhibition of print collages created from photographs they took of each other, which opened and will close with a signature performance. They’re also in the midst of a string of performances in Glasgow; when we speak, they have one coming up at Transmission Gallery (with DJ Aridtrax), and a Glasgow International performance in collaboration with artist Amy Stickland later in April. And in the coming months, among other performances at galleries and institutions in Europe, they’ll  begin a performance workshop with adults with autism and a mentorship program in London.
When Fox and Freed first met in the early 2010s (in London, through friends), their interactions were purely social, but they soon found similarities in their behaviors and approaches as artists, and began exchanging ideas. “We’re very different in some ways, but we have some similar anxieties inhibiting us,” Freed explains. 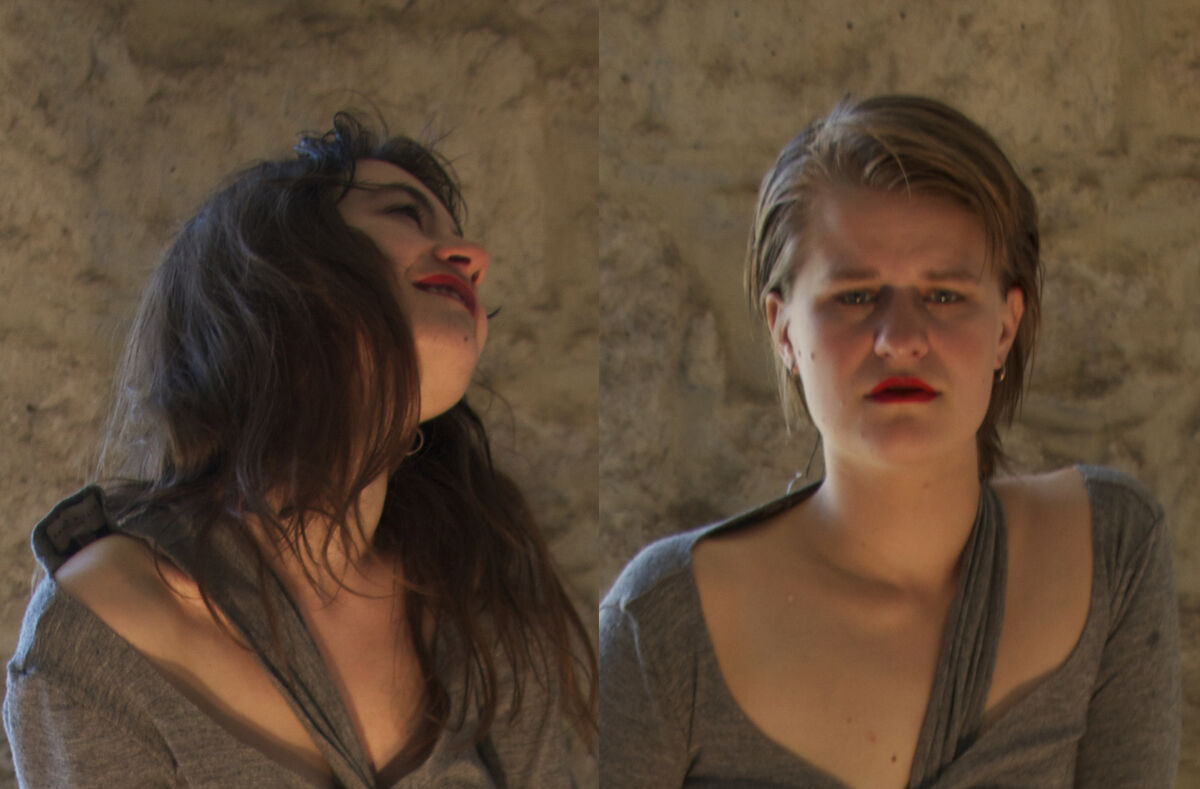 Work by New Noveta for “Zene Zemlje” at Sandy Brown, 2016. Image courtesy of the artists and Sandy Brown.

Advertisement
Born in Sweden, Freed has a background in theater and is a self-taught artist; Fox, born in the U.K., studied fine art at Goldsmiths, where she began to delve into costume and performance. She also pursued music for several years as a member of the experimental electronic band Maria & the Mirrors. They began working on installations together, staging early iterations of their public, sound-based performances, in 2011 and 2012. It was then that they adopted the moniker New Noveta.
To witness a New Noveta performance is to become consumed with Freed and Fox’s everyday anxieties. “A lot of our work is based around societal, political, social, and emotional interaction, so we’re constantly researching when we’re out anywhere together,” Freed says. “Once we have a performance scheduled, the performance sort of starts at that moment. It’s encompassing our lives, all the energy and the stresses and the movement go towards the performance.” 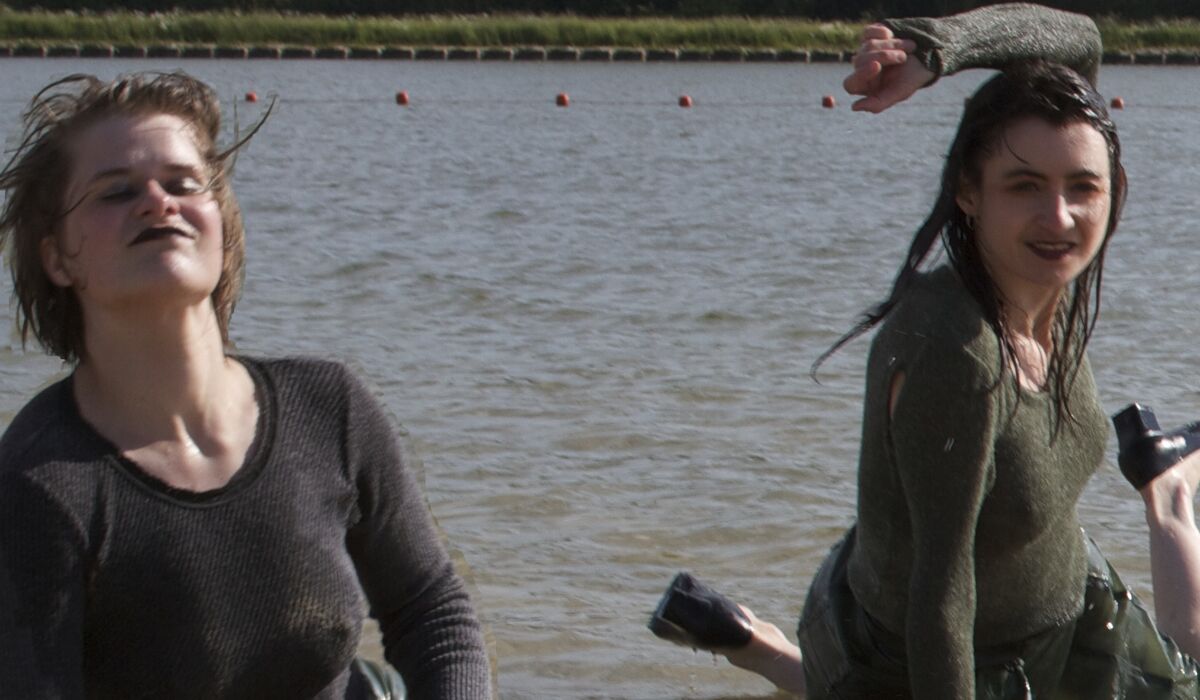 Work by New Noveta for “Zene Zemlje” at Sandy Brown, 2016. Image courtesy of the artists and Sandy Brown.

Their works begin as discussions in the studio and evolve into sound recordings. Throughout the process they constantly document each other—their voices and their bodies—through recordings and photographs. This practice is evident in their photographic works on view at Sandy Brown, in which the artists are pictured in the throes of intense, at times euphoric, performance—images that came out of a residency they did in France. “We started doing this collage work by documenting each other when we were performing, and we just began to combine two photographs into one,” Fox explains. “The pictures are quite ecstatic and express female empowerment.”
Freed and Fox believe the nature of their performance is often misunderstood. “People ask us why we’re being so confrontational. We’re not trying to confront or offend anyone,” Freed tells me. “People perceive such a direct emotional communication, and they react in all ranges of ways.” The audience adds a further element of spontaneity to works that are already semi-improvised. While the duo plots out what will occur, much of the performance is left up to chance. “You can’t control what’s going to happen, there’s a big risk element,” Fox explains. “We use water, fish, and food-based items; it’s actually very haphazard. You may be trying to do a task, but you actually can’t because you’ve fallen over or the audience is in your way.” New Noveta during a performance at Sandy Brown, 2016. Photo by Louis Backhouse, courtesy of the artists and Sandy Brown.

While performing, Freed prefers to avoid eye contact with the audience, while Fox often does so subconsciously. “Half of it is acted, but half of it is quite real, and it’s intimate,” Fox says, “so I end up actually interacting with people strangely or looking at people very directly, when maybe I’m not really meaning to.” At a performance in Tokyo last year, for example, audience members, alarmed at what they saw, began to intervene. “What you see in the performance is two people being in an extreme struggle, and in Tokyo, people started to help us,” Freed explains. “That’s not really what we want, but they reacted that way,” Fox adds. They note that they’ve never experienced such a reaction in Europe.
When I ask about the origins of the name New Noveta, the artists insist that it’s unimportant to their practice. Indeed, it’s difficult to apply words to what they’re creating. Perhaps it’s due to the slippery nature of the work—existing somewhere between performance, sound, and visual art. Or maybe it’s the urgency and intensity inherent to every showing; the way in which, during performances, the artists move as though they’ve been charged with electric currents. In the end, it may be best to surmise that New Noveta is nothing if not new.
—Casey Lesser
Related Stories 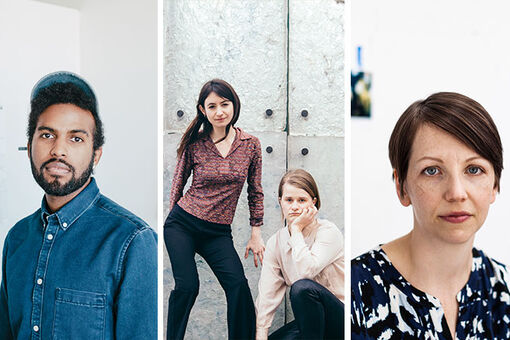