Up and Coming: Przemek Pyszczek Maps the Creative Potential of the Former Eastern Bloc 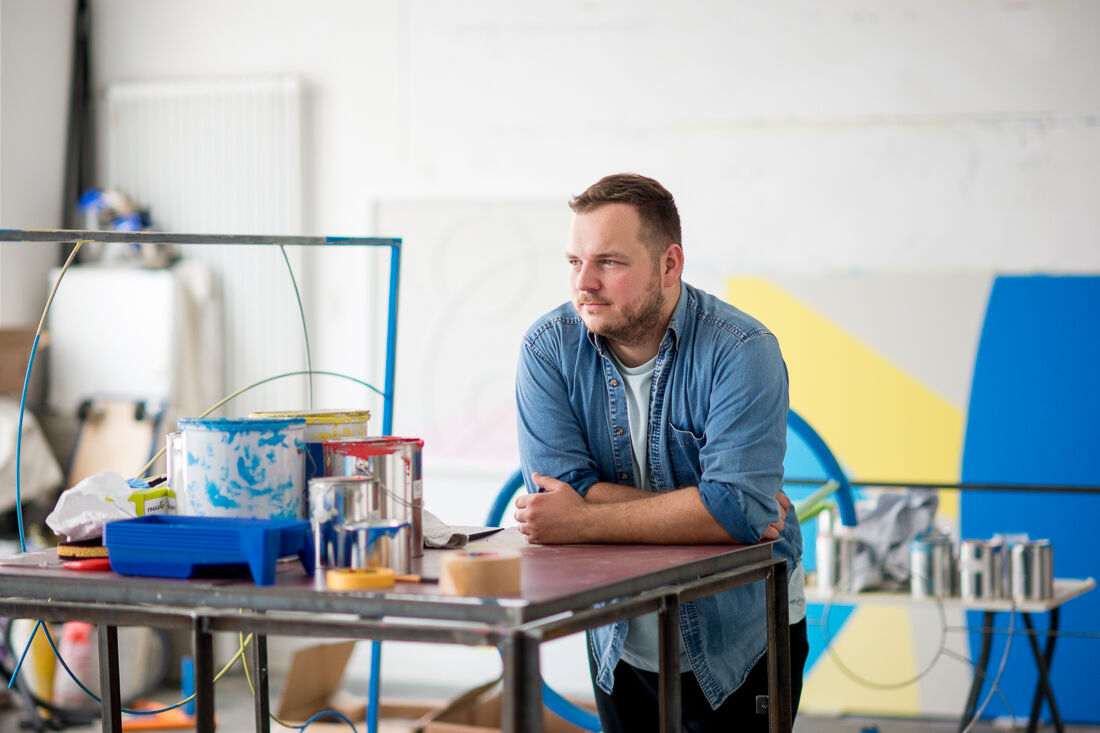 Przemek Pyszczek
’s studio is only a 20-minute ride on the train from Berlin’s Alexanderplatz, midway along a line most frequented by the Easy Jet-set on their way back and forth from Schönefeld Airport for sleepless weekends of bad drugs and great music. But the kilometer-long stretch of warehouses in Schöneweide, which once housed East Berlin’s most important power station and now, in part, Pyszczek’s sundrenched atelier, is a Berlin those hoards—and, for that matter, most who populate the city’s increasingly booming city center—rarely see.
This is Ossi country, untouched by the city’s newfound, relative economic prosperity of tech firms and startups of all colors, and thus relatively unchanged since the Berlin Wall came down, save the stoppage of the whirring turbines that employed the micro-region’s residents. It’s a fitting setting for the 30-year-old, Polish-born, Canadian-raised, Berlin transplant to create works that trace his home country’s transition since the fall of the iron curtain and an ongoing journey to rediscover his own past. 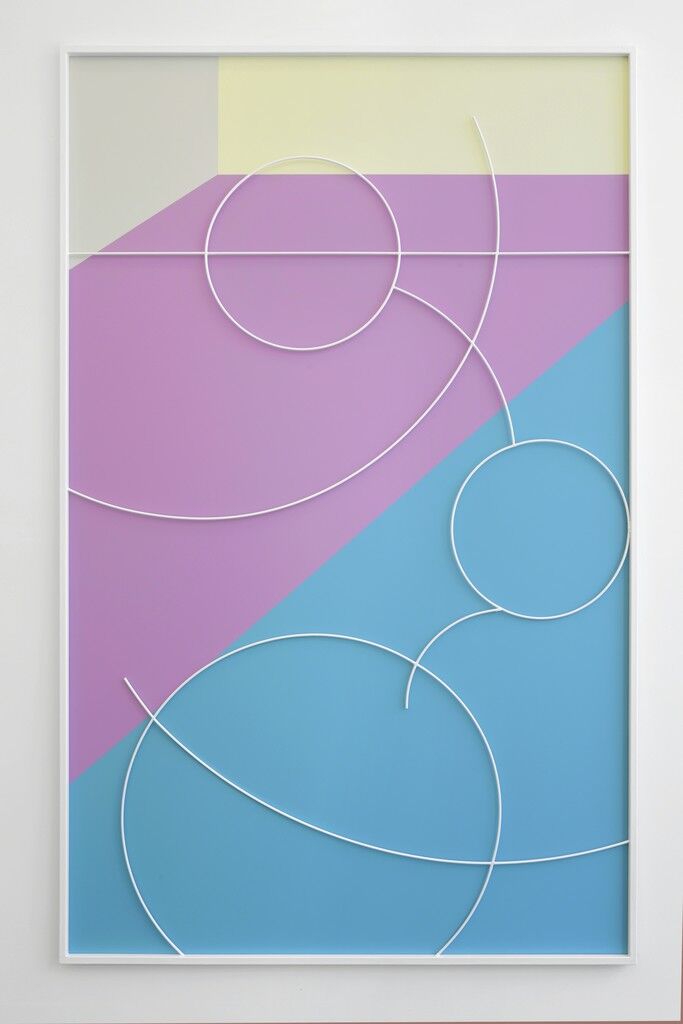 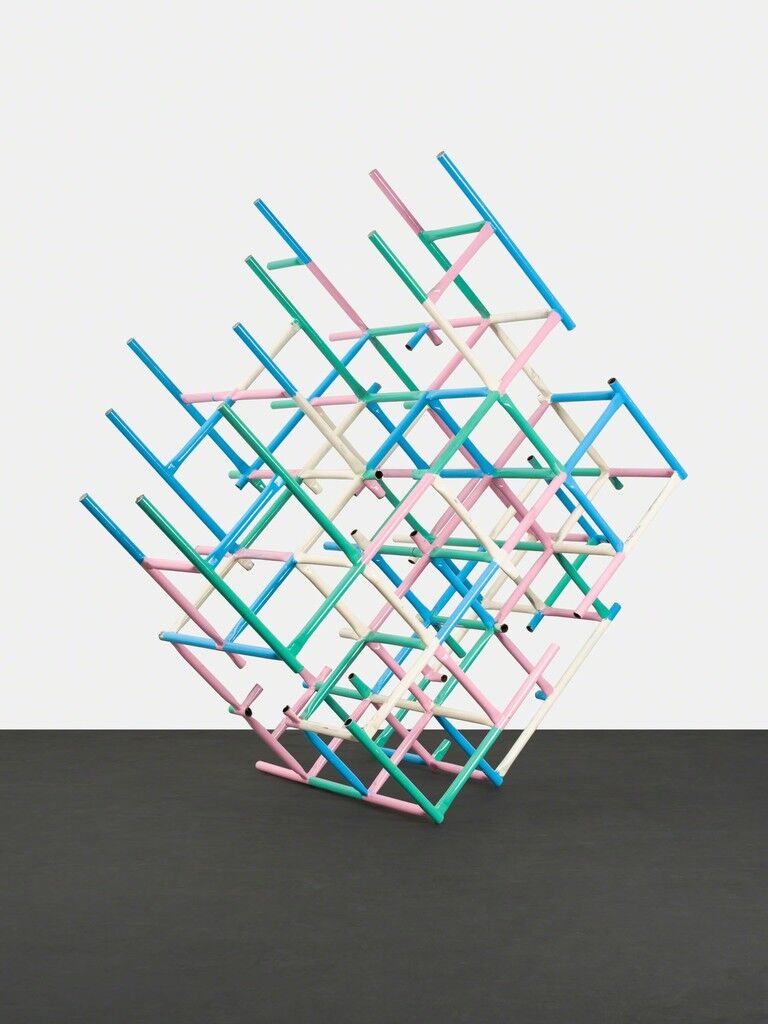 Przemek Pyszczek
Playground Structure (Grid), 2015
Peres Projects
Two bodies of work have emerged most prominently in Pyszczek’s practice thus far: his “Facade” paintings that capture the graphically decorated external walls and whacky window bars of communist housing blocks in suburban Warsaw, and “Playground Structure” sculptures, which see the always-varying forms that compose those estates’ play-places cut away at with a circular saw.
To a great extent, the works came about by chance. Pyszczek’s family moved to Canada in 1987 when the artist was only two and a half. He moved to Berlin in 2010 and began traveling back to visit his grandmother and check out the Warsaw nightlife. (The city, at the time, was being heralded as the next Berlin; many others have followed.) But, as he recounted earlier this month, fresh from installing his two-person show with
Donna Huanca
at Berlin’s Peres Projects (he’s also in Office Baroque’s “RIO” this summer and will have a solo show with L.A.’s Mihai Nicodim in January), “It wasn’t until 2012, when my parents came to visit, that I really traveled around the country. That’s when I started noticing these visual idiosyncrasies and phenomena in the architecture and the landscape.” 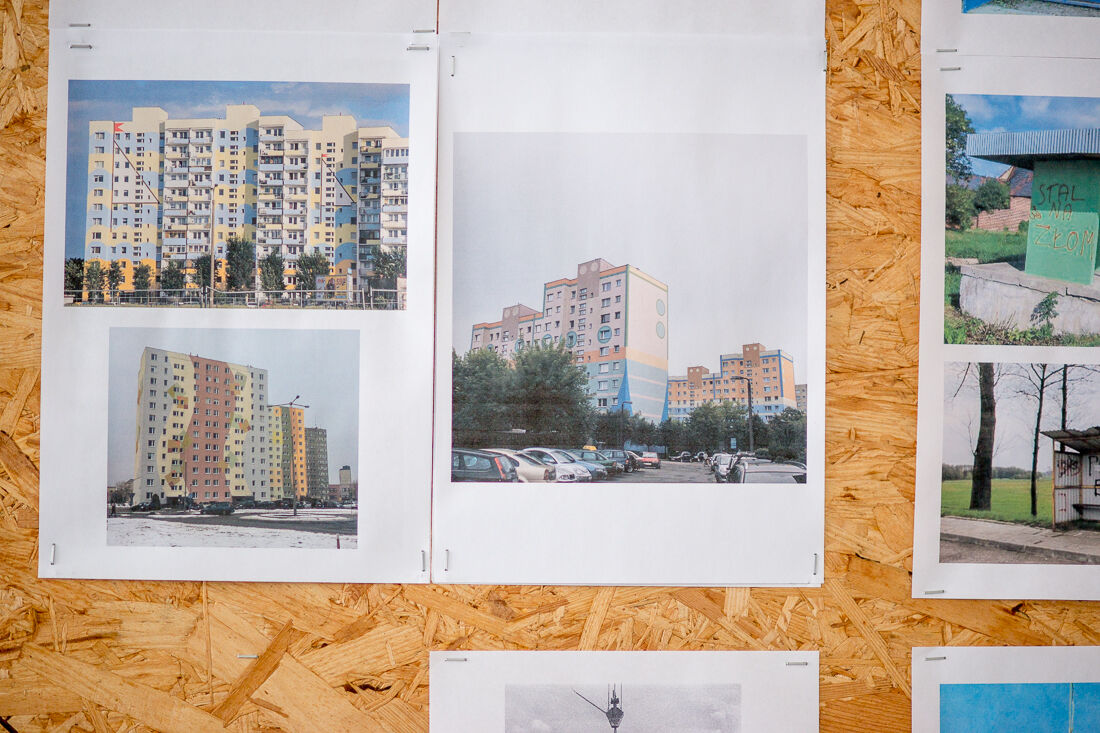 Advertisement
He began photographing housing estate facades, which, since the fall of the iron curtain have been painted as if to resemble a multi-colored boat or a giant butterfly. (The photos were initially used as reference for a series of collages, which replicated the building facades in 2D with strips of glossy, colored paper and have since become the principal reference materials for his paintings.) As Pyszczek explains, “After the fall of communism, they started refurbishing these buildings because of heat loss issues, insulating and stuccoing the facades, and painting these crazy graphics all over them.” A recent set of works pulls from a single street outside of Warsaw, Copernicus Street, whose buildings are appropriately planetary themed. Saturn is a favorite. 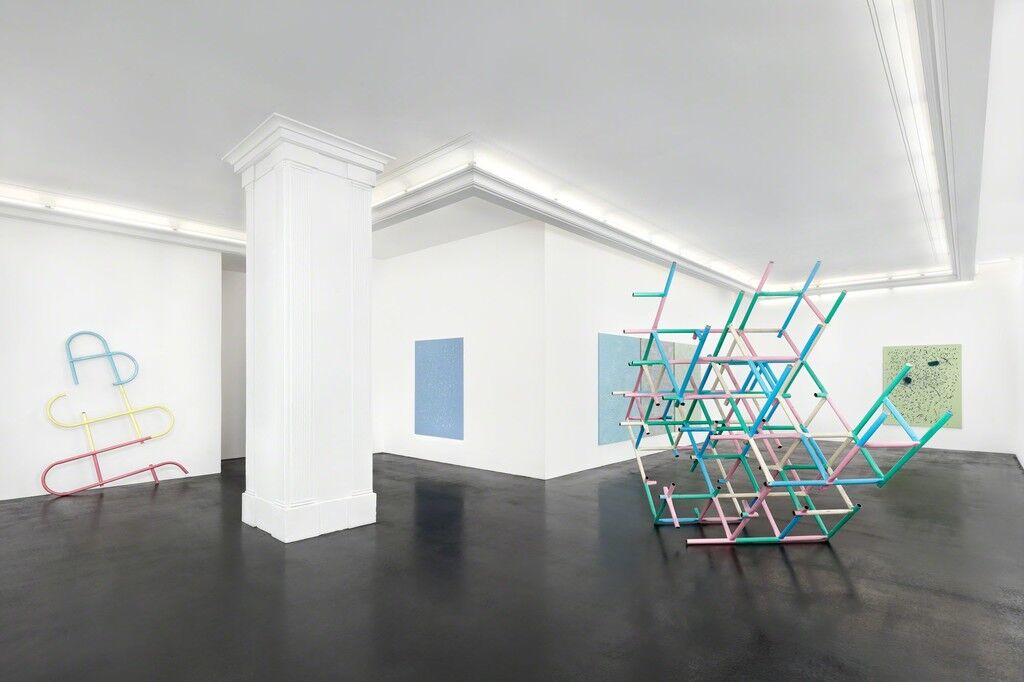 The dimensions of the basic building blocks that made up the original facades have become a rubric for Przemek’s “Facade” series. The pieces see the graphic patterns from snapshots of building-sides zoomed in on to varying extents, hand-rolled onto Dibond, and covered with fabricated window bars also inspired by those affixed to the high-rises  surrounding his infantile home. “Window bars have been a tradition in Eastern Europe going back to communist times as well,” says Pyszczek. “People couldn’t readily import commercial products and so they had to rely on the limited amount of goods that could be imported from other communist countries or make things themselves.” 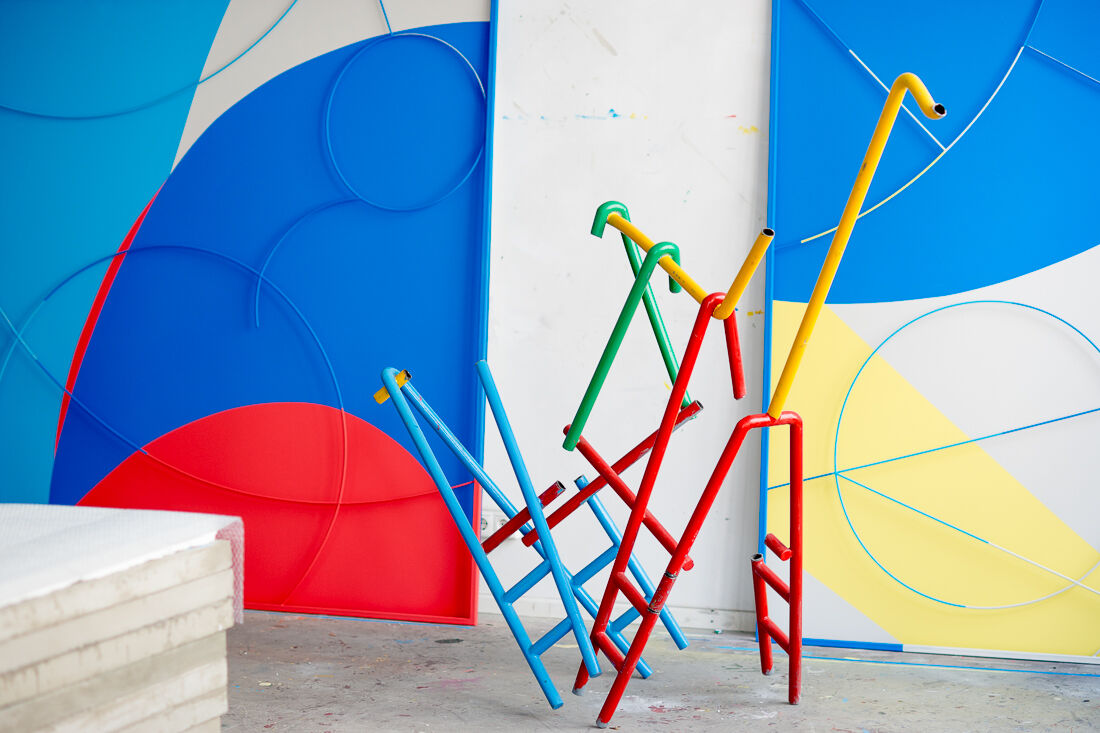 Coming from a Western, brand-dominated environment of standardized products, Pyszczek says the bars’ and painted facades’ “kitsch factor” drew him in. “Growing up in Canada, when you needed something like security bars, you would just go to Home Depot and buy it,” he says, noting, however, that his metalworker father would actually build them new book shelves or a TV stand in his company’s shop, borrowing from the traditions of his home country. In Eastern Europe, “not every single thing was commodified into an industry,” Przemek explains. State industries were involved in the production of certain things like cars or other consumer products of practical necessity. “But there were other things that you just couldn’t get because there weren’t companies making them.” Without the ability to import those products from the West, “the solution was just DIY it, then.” 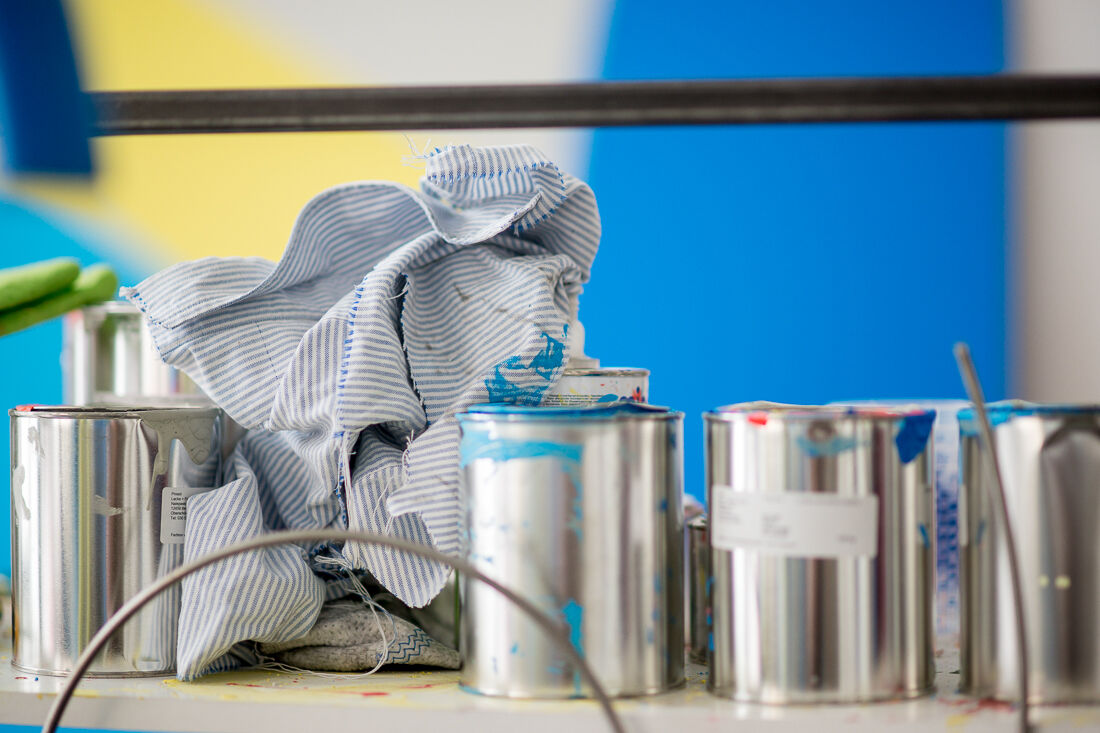 The remarkable thing that developed out of this practical need is that, contrary to Western Cold War propaganda, which might have one believe that the other side of the Iron Curtain was a place where self expression went to die, it unintentionally fostered a wealth of vernacular creative expression. “This person who’s not a designer or artisan, he’s just a metal worker, ends up expressing some innate creative impulse in this very practical task of making a railing or bars for a window,” says Pyszczek. Come 1989, that expression made its way onto the building faces as well. “A quarter of people in Poland still live in some sort of prefabricated panel building,” the artist explains. “Living in this pod of the system, how do you make it your own?” 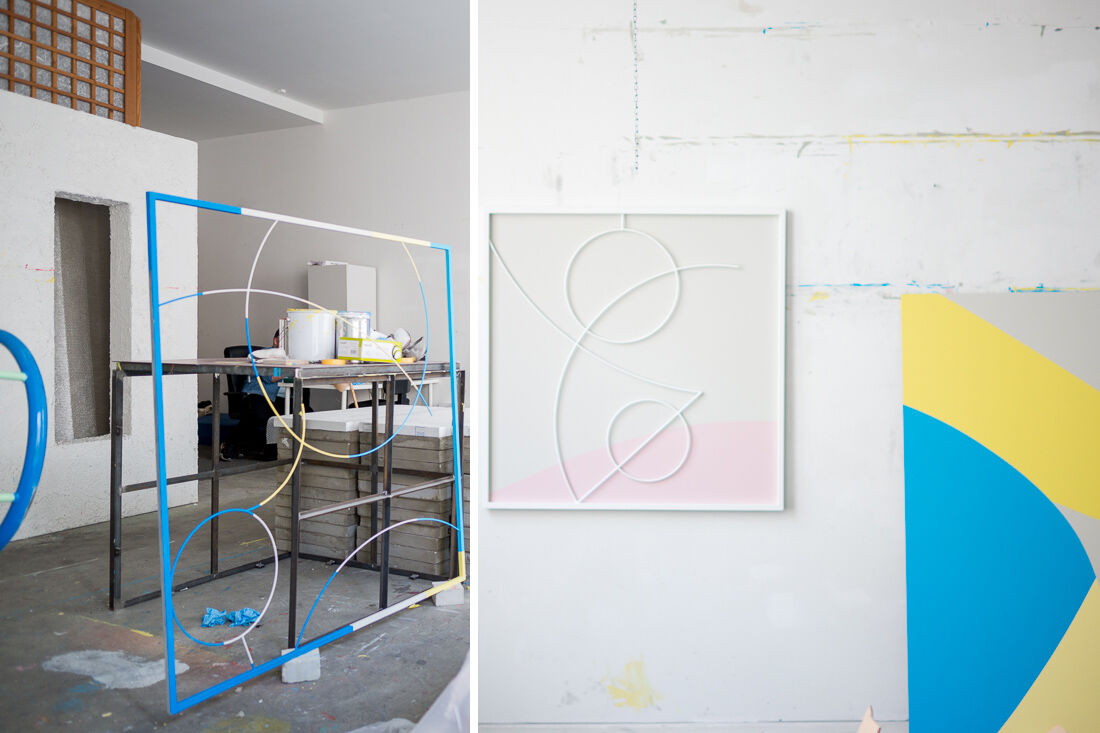 For Pyszczek, this cultural context lays down a sort of background track to the main thrust behind the work. “In the end, it’s really about the process and this social interaction,” he says. “I’ve never felt fully Canadian or fully Polish. I grew up only speaking Polish with my parents and my brother. And so I feel like I didn’t get to have certain aspects like interacting with someone in a work situation in the Polish realm of my life.” 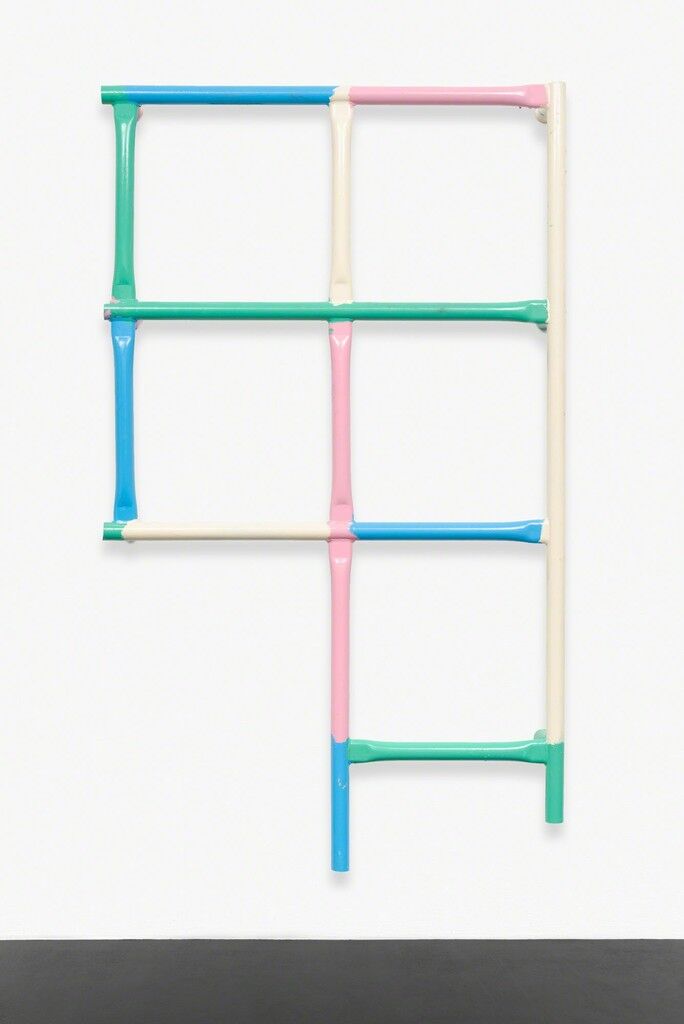 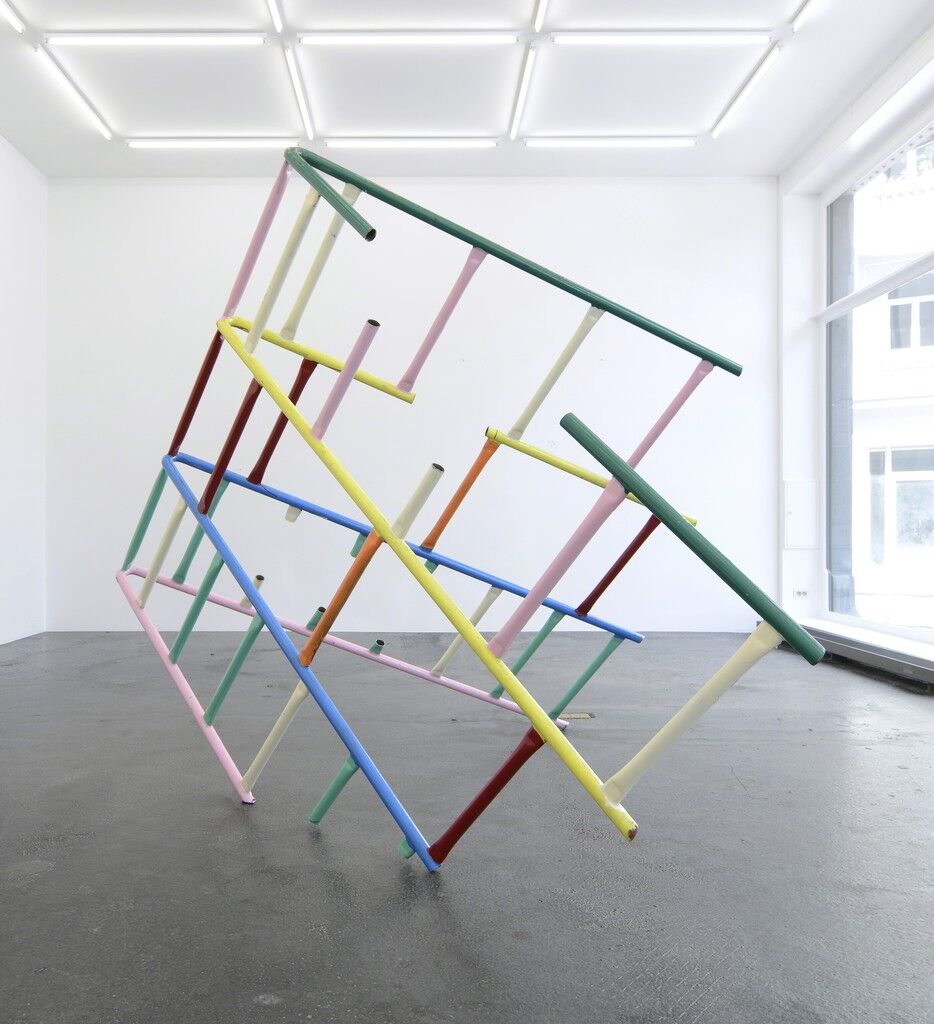 Przemek Pyszczek
Playground Structure, 2015
Office Baroque
This is particularly the case with the “Playground Structure” works and the window bars, which he has fabricated by metalworkers who once made them for functional use. “I don’t want them to reflect something that they’re not,” says Pyszczek. “Obviously, they’re not actually from a playground. But I want to make something that’s as true to what it would actually be before it’s cemented into the ground without using a found object.” The process also reflects the fact that, though giraffes, spirals, and rockets were particularly popular playthings in Poland during Pyszczek’s youth, the physical objects’ appearance can vary wildly from one community’s favored welder to the next. 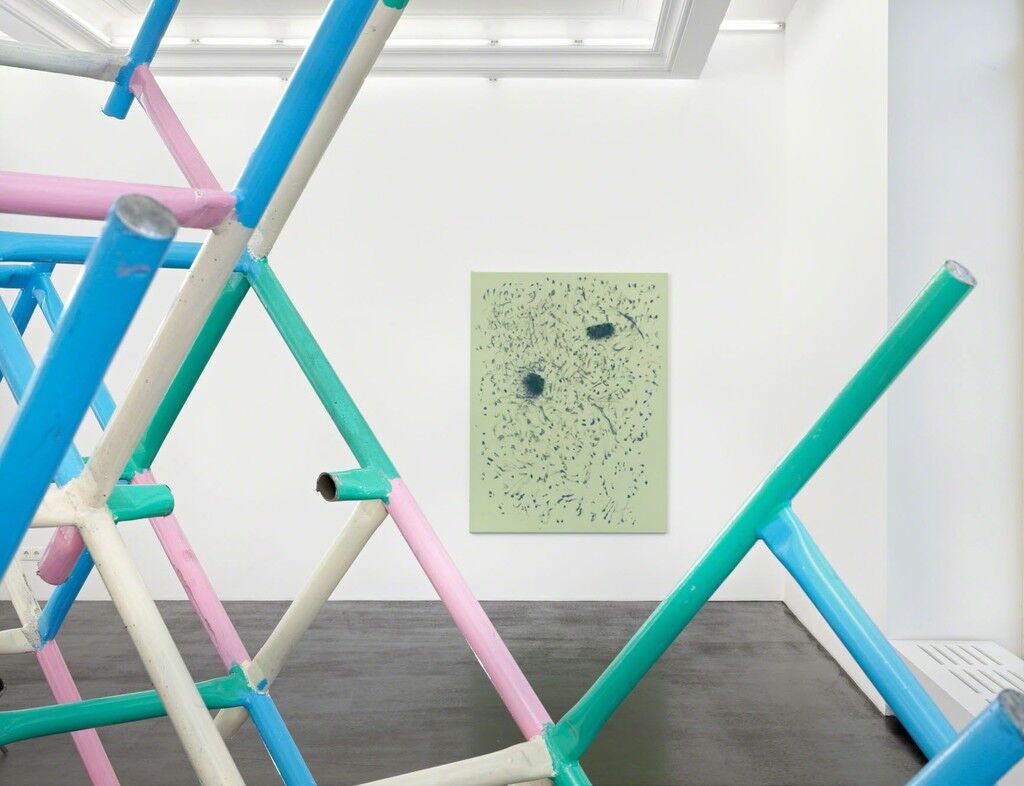 The play structures’ potential for children’s use has been abstracted away by Pyszczek’s cuts, and the bars’ worthiness to fend off a robber has also all but been eliminated. But Pyszczek’s creations manage to skirt the polished finish that might otherwise allow their loaded history and creative process to be sloughed off. The sculptures are not Koons-ified objects powder-coated to perfection but rather industrial tubes with cut edges left jagged, obviously hand-painted in found color palettes. In fact, they are to a great extent an Eastern Bloc foil to the American’s monuments to industrial capitalism’s perfection of artifice, highlighting, instead, the minute moments of creativity possible when necessity favors self-reliance over quality controls.