Up and Coming: Sol Calero Turns Studio Voltaire into a Kitsch-ified Caribbean Classroom Portrait of Sol Calero during installation at Studio Voltaire by Damian Griffiths for Artsy.

On Friday, London’s Studio Voltaire debuts “La Escuela del Sur,” Berlin-based artist
Sol Calero
’s largest exhibition—and the most radical transformation of Studio Voltaire’s space—to date. Calero has spent the past five weeks turning the institution into an exaggeratedly kitsch-ified version of a Caribbean school where members of the local community and the art world will come to take classes on Latin American art history, among other activities that will develop over the next two months. “La Escuela del Sur” is the first of Calero’s colorful installations to take a specifically educational bent. In the past, she’s decked out a Berlin salsa school with pastel-colored paintings of tropical fruit, palm trees, and dancing couples. She’s turned London gallery Laura Bartlett into a similarly exoticized hair salon, and the gallery’s 2014 booth at Frieze London into a verdant internet cafe. (She’ll have a set of school furniture from the same series presented at Voltaire at Bartlett’s Frieze booth next week.) And she’s created a Caribbean-style house in the parking lot of Basel-based project space, SALTS. She also runs Berlin project space Kinderhook & Caracas with her husband, fellow artist
Christopher Kline
. Advertisement
“I often start my projects by researching the spaces I have to work with, in order to create the social aspect of the installations,” the artists tells me while putting the finishing touches into her Studio Voltaire show. Pulling from the Sunday School past of the institution’s home (it used to be a Victorian chapel), Calero decided to create a school for the surrounding community, which is bisected by a balcony where viewers can watch the activities unfold. Photos by Damian Griffiths for Artsy.

Though Calero was born in Venezuela, she has spent the majority of her life abroad. She moved to the Canary Islands in 1999 at the age of 17, following the election of the late president Hugo Chavez. Her father was originally from the islands and, for Calero, the move was a sea change. “When I got there, I was pretty amazed. You could just walk on the street. There was so much freedom,” she says. The move also enabled her to pursue being an artist; “you can’t really study art in Venezuela,” she remarks. And it gave her the perspective on her roots in Venezuela that have become the core of her practice. 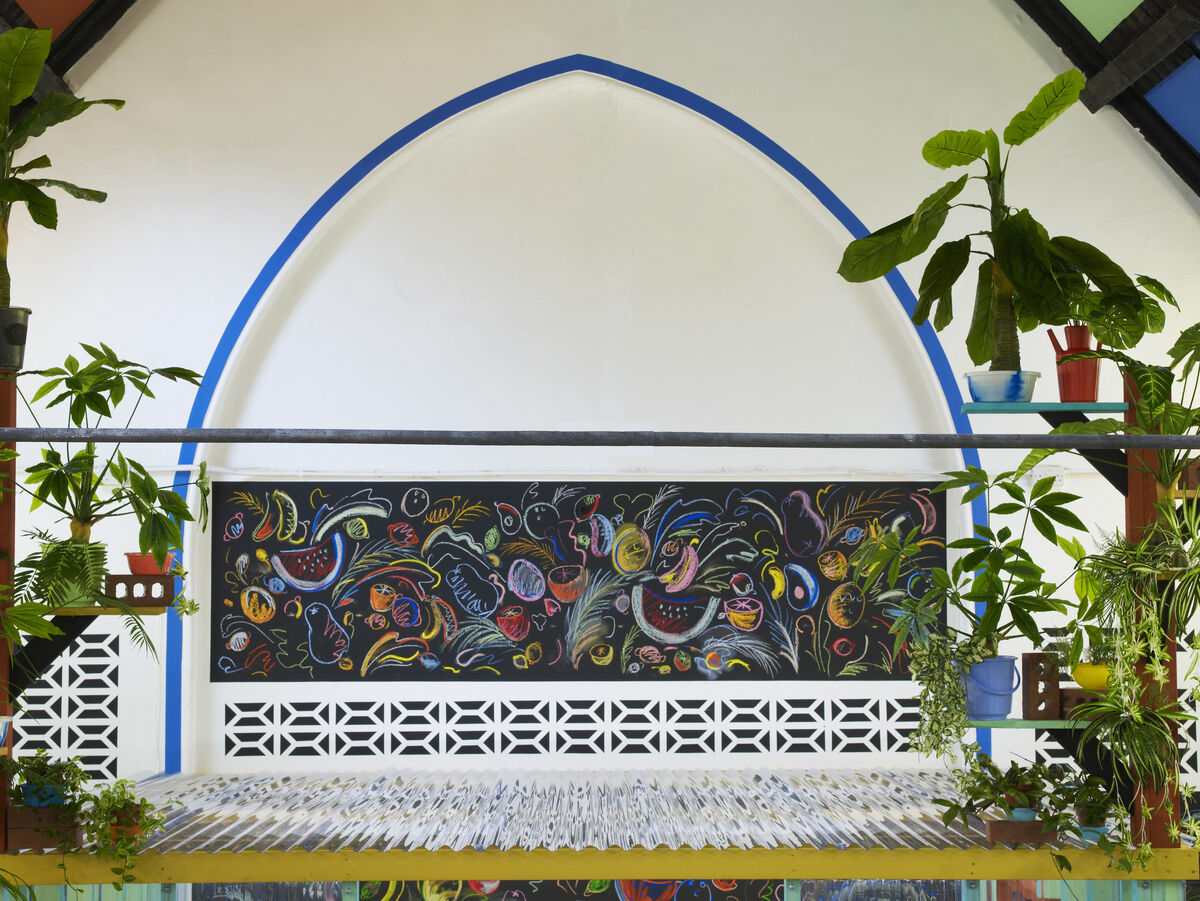 After studies in the Canary Islands and Madrid, Calero moved to Berlin seven years ago on a grant and began to reflect more intently on Venezuela and the Caribbean in her work. “I had been doing more conceptual work, but I wasn’t sure exactly what I wanted to say,” she recalls. She began spending more time in Central America, particularly in Nicaragua, where she became increasingly fascinated with Latin American art history, and where the conceptual framework of her practice came into focus. “We don’t really study Latin American art in school,” says the artist. “And the way we perceive it, both in the market and in institutions, is pretty much still this idea of the exotic. We see shows of ‘the new Latin American artist.’ It’s the same with African art. But the reality is that this identity is more complex.” 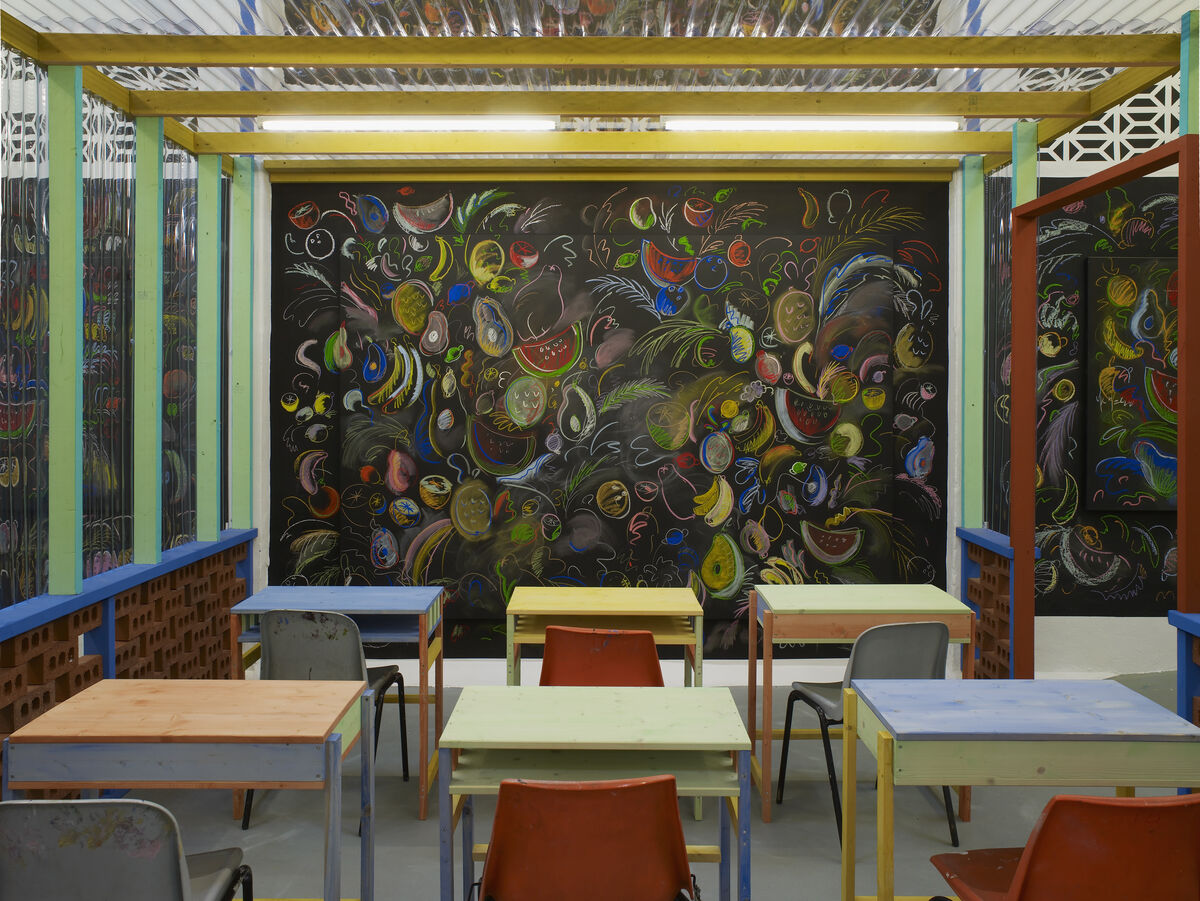 And it’s an identity that has, itself, been influenced by outside perceptions. Calero often references Franklin D. Roosevelt’s 1933 “Good Neighbor Policy” and propaganda films made in Hollywood in the ’40s—like those starring Carmen Miranda, which sought to bond the American public to their southern neighbors. “The problem isn’t only the way we perceive the ‘Other,’ it’s the way in which these places then become the way they are portrayed,” she says. For a country such as hers, without a strong pre-Colombian culture like that of Mexico or Chile, Calero says, the effects of American propaganda were particularly influential. 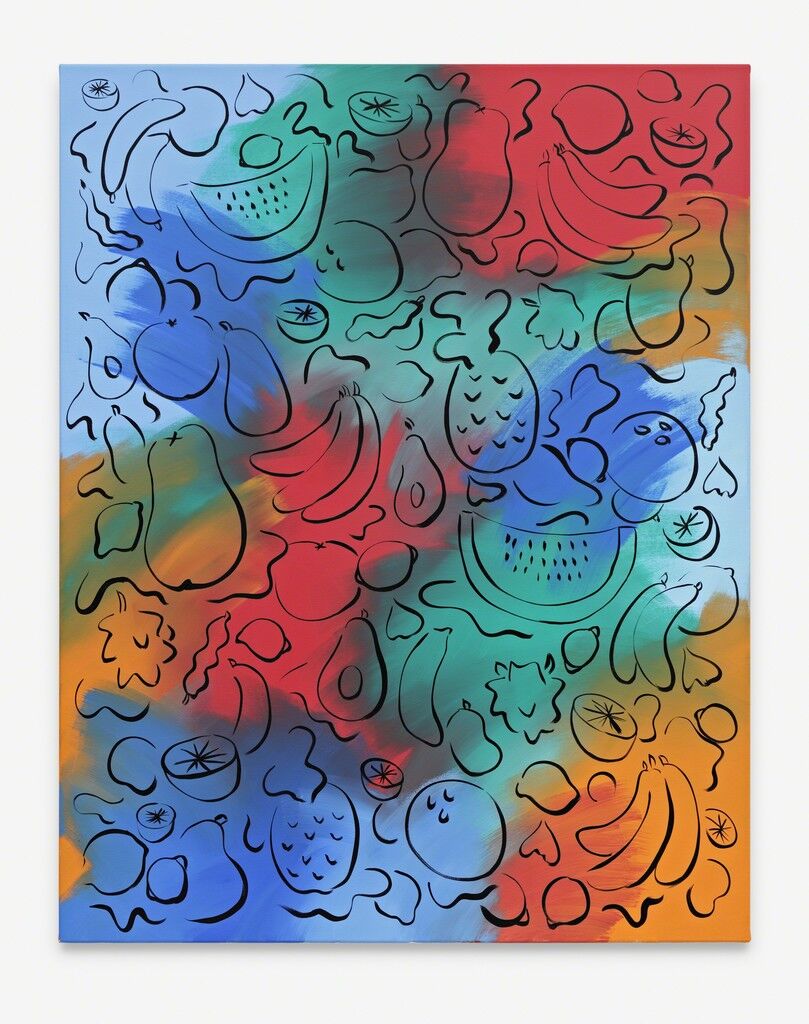 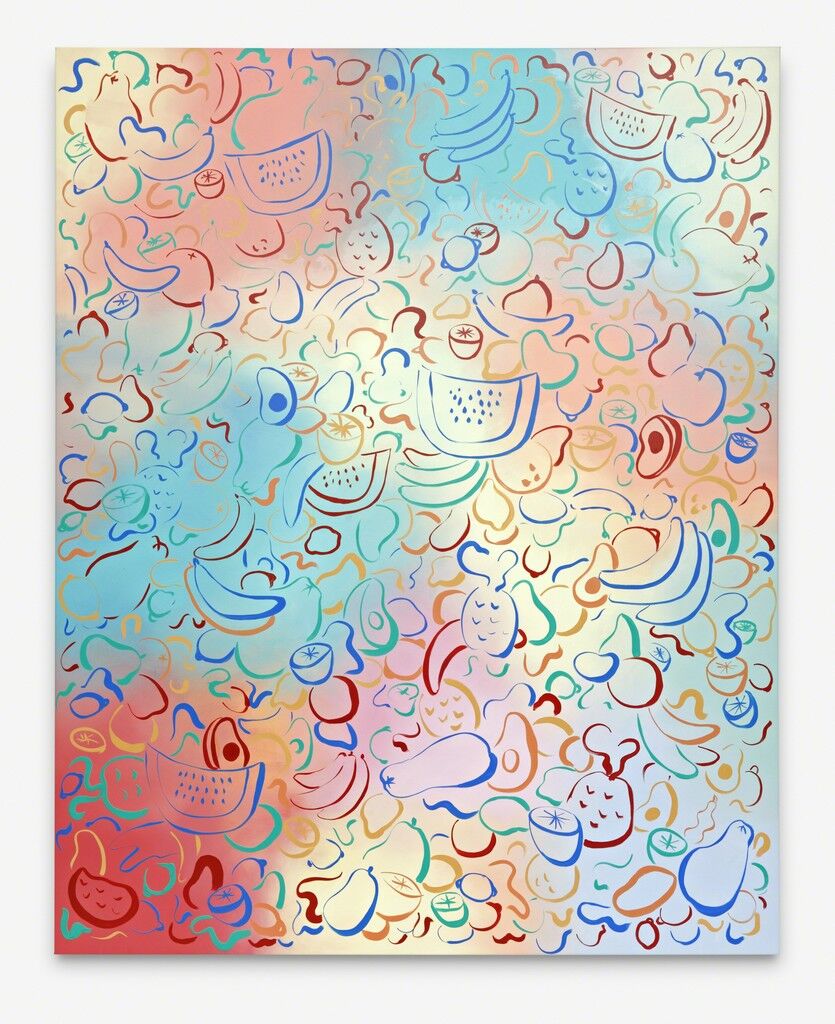 Sol Calero
Frutas, 2014
Laura Bartlett
To a certain extent, the artist’s work can be seen as a reversal of this process. She uses the stereotypical imagery and vibrant color palette of the Caribbean to draw viewers into and contextualize the presentation of her research into Latin American art and cultural history. And the Studio Voltaire show marks several notable developments in Calero’s painting practice that support that relationship. Following a trip to Venezuela’s Los Roques archipelago, a sparsely inhabited national marine park, she began painting large-scale canvases of building facades she found on the islands, wanting to create a space “where you feel like you are entering a Caribbean town,” as she explains. She also shifted away from the traditional, oil-on-gesso-primed canvases used for past fruit paintings, to instead creating her favored motif in chalk over blackboard paint. Both are efforts to allow “the paintings to get lost in the space” rather than assert their presence directly. The show comes at an important time not only in Calero’s artistic career but also in the cultural arc of her home country. As the strength of the socialist Chavistas’ grip on the country’s political life has waned since Hugo Chavez’s death and during the subsequent tenure of President Nicolás Maduro, culture has been a site of increased government intervention. “The government is trying to invent an identity for the country,” says Calero. “They closed the university of art, fired all the professors, and are now teaching the students to make propaganda art.”
The limited number of artists from Venezuela that have made it into the art historical canon haven’t been outside of this reach. “Take [Armando] Reverón, for example. I feel so bad for this guy. If he could see what the government is doing to his work, he would die again.” Calero’s efforts may not be able to change the cultural climate back home in Venezuela, but they could very well help chart a corrective course for those elsewhere. Class, take your seats.
Alexander Forbes is Artsy’s Consumer Marketplace Strategist. He was previously the Executive Editor of Artsy Editorial.
See more Artists to Watch at Frieze London.
Explore Frieze London 2015 on Artsy.
Related Stories