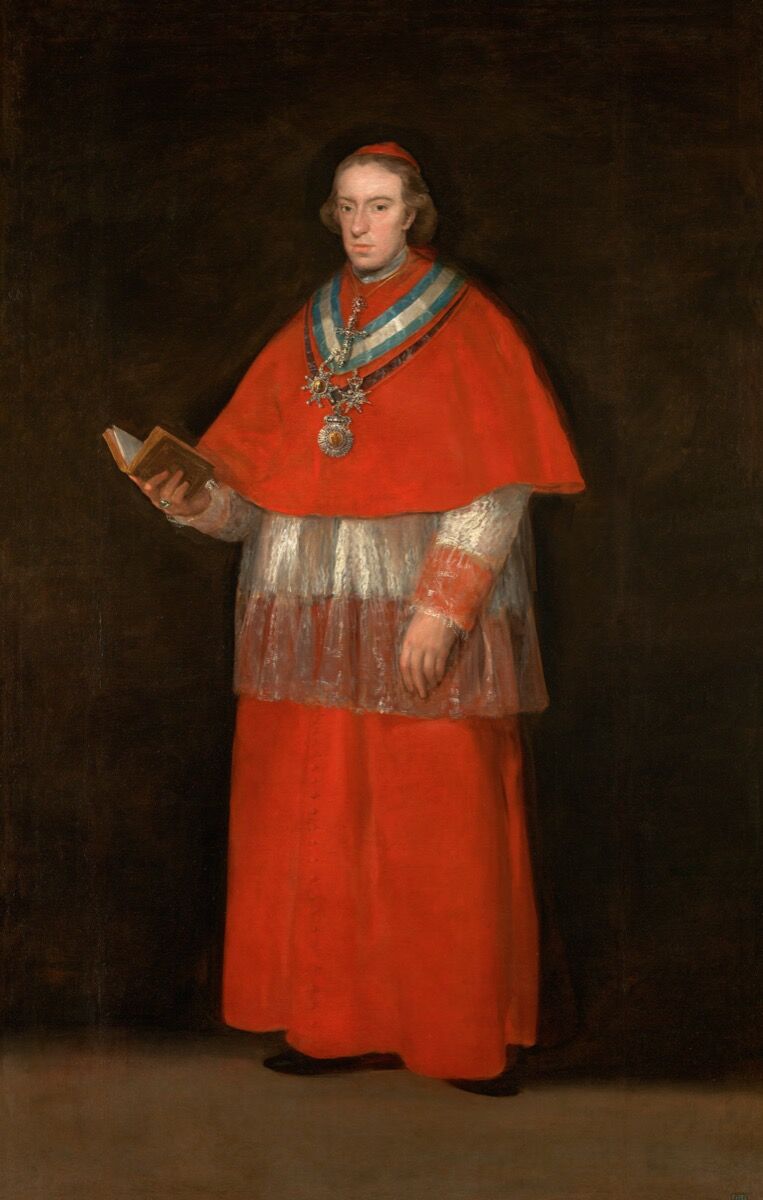 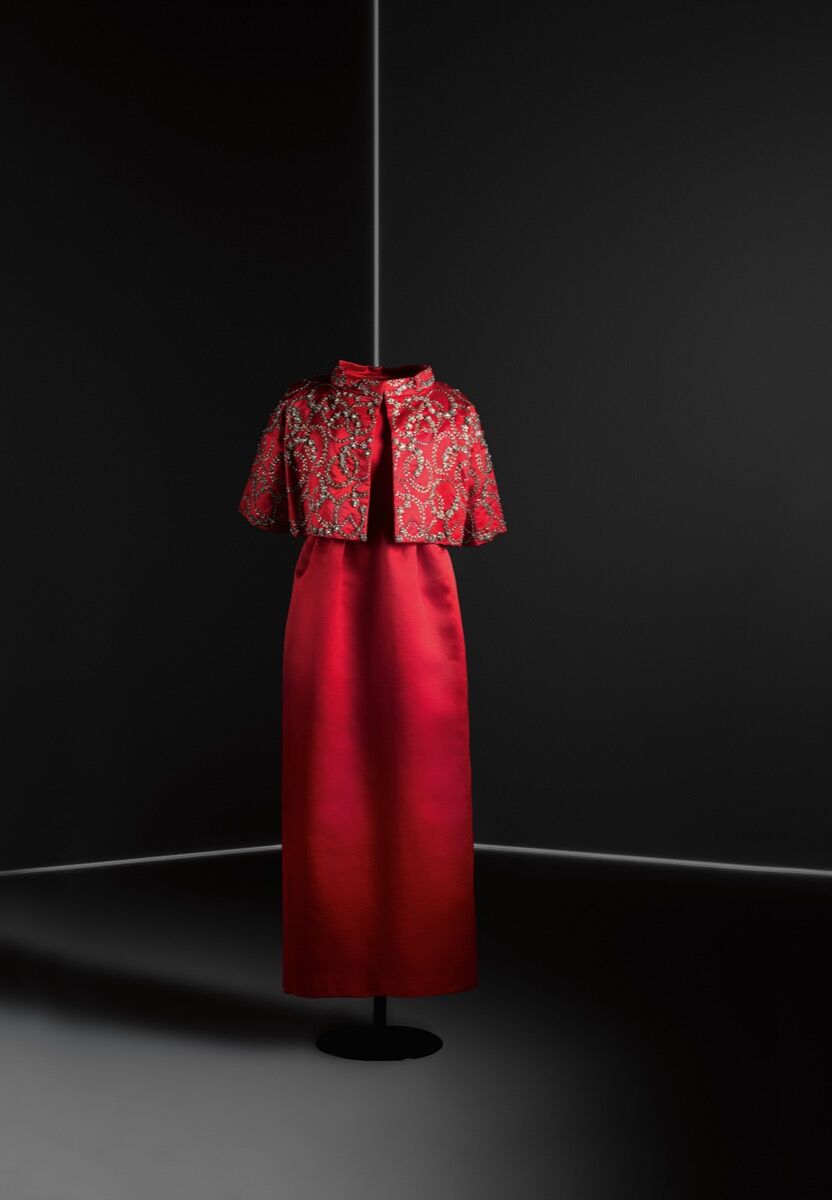 In the 20th century, Cristóbal Balenciaga ruled haute couture with innovative apparel inspired by unusually traditional Spanish sources. The Basque fashion designer took cues from regional dress, folk costumes, bullfighting, flamenco dancing, Catholicism, and, pivotally, the history of painting. He once said that a “good fashion designer must be an architect for the patterns, a sculptor for the shape, a painter for the designs, a musician for the harmony, and a philosopher for the fit.”
A new exhibition in Madrid, “Balenciaga and Spanish Painting,” on view at the Museo Nacional Thyssen-Bornemisza through September 22nd, showcases the full breadth of the country’s artistic and fashionable heritage as interpreted by one of its preeminent modern designers. Eloy Martínez de la Pera, the curator of the exhibition, has paired 90 Balenciaga garments with a selection of paintings by Spanish masters spanning the 16th to 20th centuries. The connections between them are “based on conceptual elements, on architectural forms and volumes and on chromatic echoes,” according to the press release. 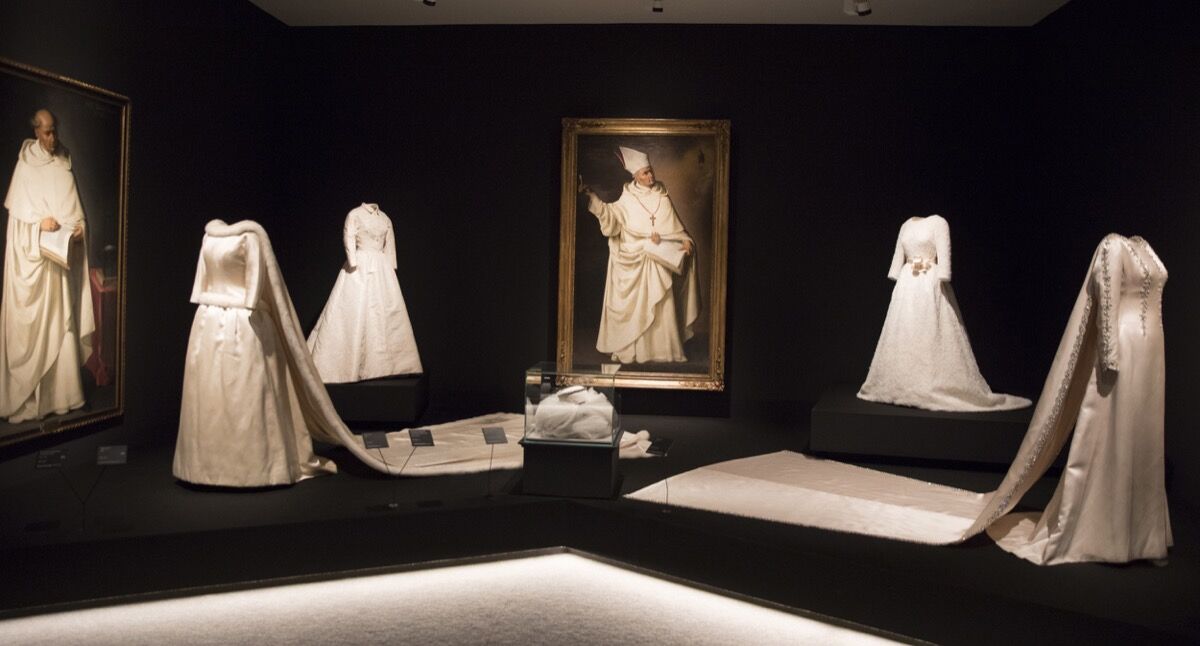 The pairings are indeed satisfying on purely formal levels. The 20th century may have been the dawn of modern fashion, but the daringly contemporary sculptural silhouettes of Balenciaga’s evening gowns resonate with the styles worn by painted ladies and religious figures from hundreds of years ago.
Sometimes the designer took literally from art history. His 1939 “Infanta” dress offers a modern update of the panniered gown worn by the little Infanta Margarita of Austria in
Diego Velázquez
’s iconic Las Meninas(1656). Balenciaga composed the cream silk satin dress lined with red velvet in Paris, where he set up shop in 1936 to evade the Spanish Civil War. The references to Balenciaga’s cultural heritage in his designs from this period are especially imbued with nostalgic, solemn respect. 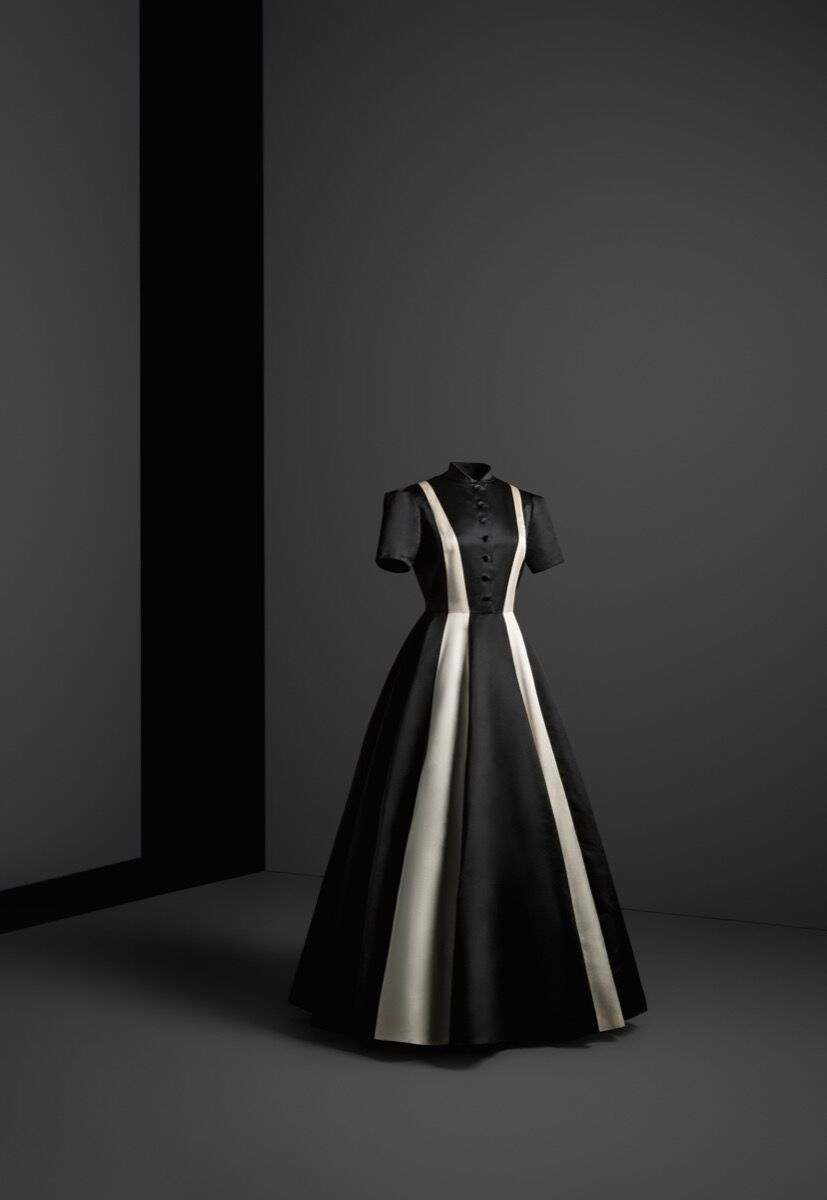 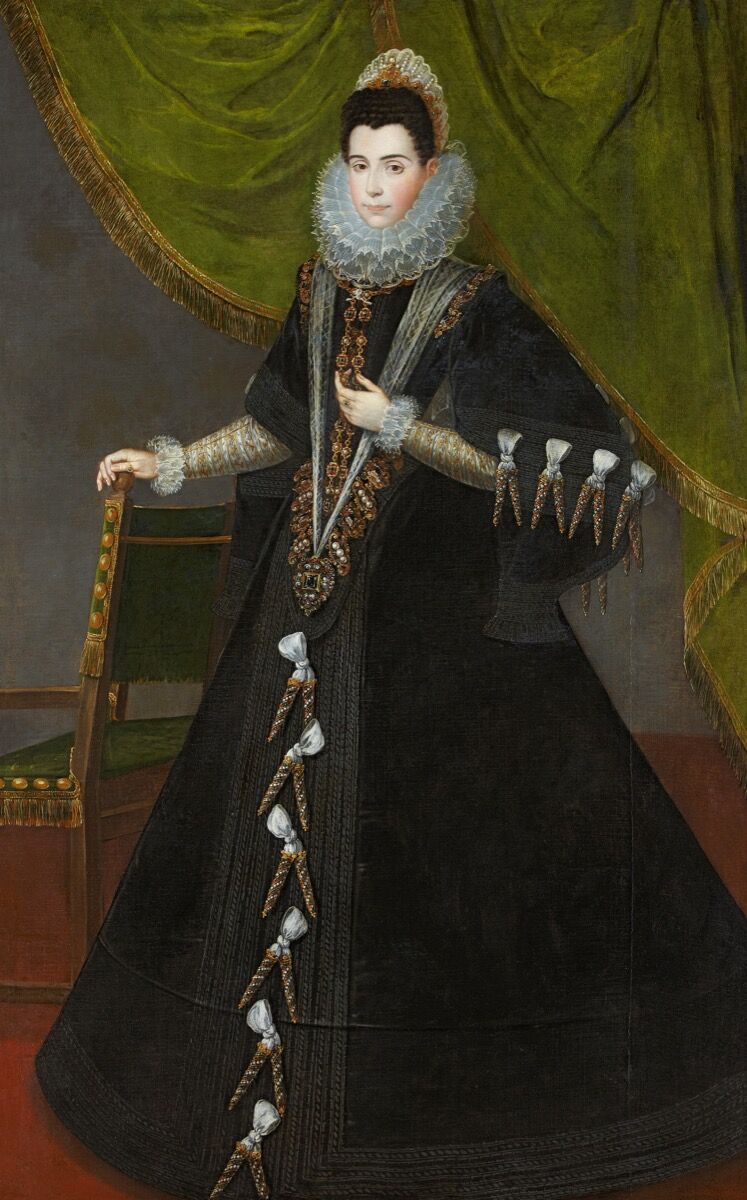 Advertisement
Balenciaga’s trademark color, black, has deep roots in the history of fashion, but especially in Spanish culture. In the court of Phillip II, black became the ultimate status symbol. The timeless color remains “one of the archetypes of Spanish identity,” the press release notes, perhaps due to Balenciaga’s influence. In 1938, Harper’s Bazaar characterized Balenciaga’s shade in physical terms: “The black is so black that it hits you like a blow.”
A high-neck black satin evening gown from 1943 features matching silk buttons from waist to collar, with two vertical white stripes cascading elegantly down the length of the dress. The garment nearly resembles a priest’s habit. It also reflects a minimalist take on the starchly conservative black gowns preferred by fashionable Habsburg courtiers, like the ruff-necked Countess of Miranda, who is depicted in an undated painting attributed to 16th-century artist Juan Pantoja de la Cruz. Unlike Balenciaga’s pared-down design, the countess accents her finery with jewels embroidered on her sleeves and skirt, a technique Balenciaga himself popularized in other, more embellished designs. 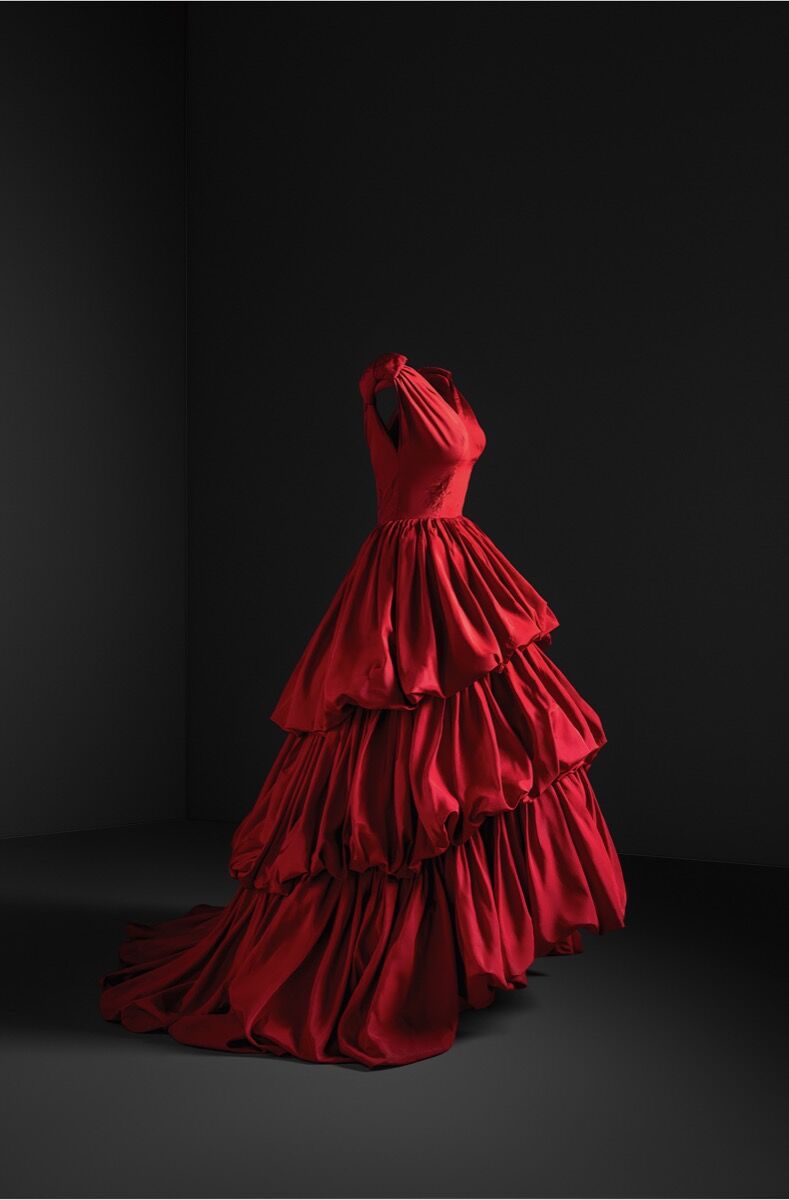 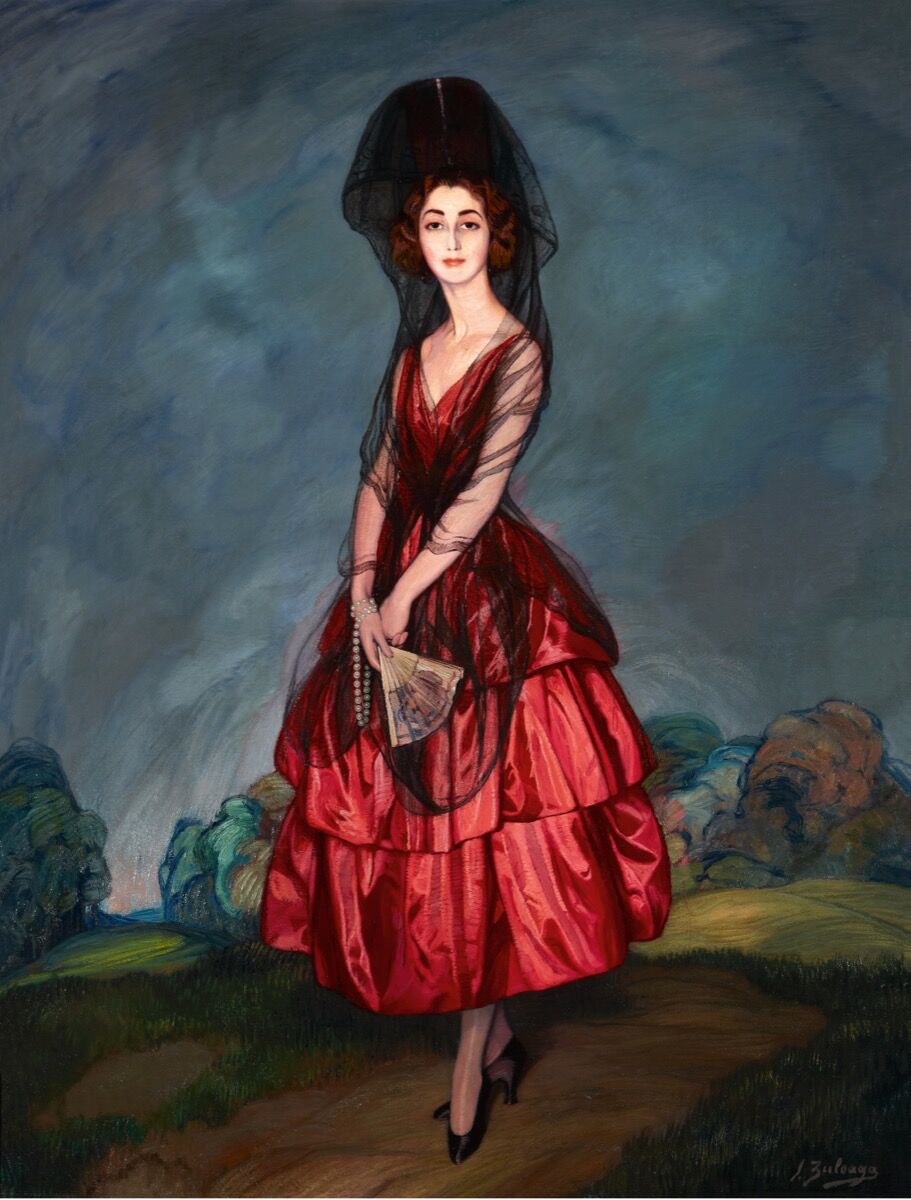 The Catholic spirit is also unmistakably evident in a pairing with
Francisco de Goya
. The
Romantic
painter’s portrait of a red-frocked Cardinal Luis María de Borbón y Vallabriga from around 1800 is compared to a red satin dress and cropped beaded jacket from 1960. The dramatic, rounded tiers of the cardinal’s red-and-white vestments are updated in the designer’s structured, ballooning silhouette, crafted in equally heavy satin fabric. Balenciaga’s ensemble was a staple of elegant 1960s fashion—Jackie O was a fan—but in this context, it is rooted in the past. In addition to its staid religious connotations, the sparkling silver leaves stitched into the jacket lends the garment the daring appearance of a matador’s bolero.
One of the latest paintings in the show,
Ignacio Zuloaga
’s 1921 oil portrait of the Duchess of Alba, evidences a fruitful push-and-pull between art, fashion, and history. The Basque painter—a contemporary and acquaintance of Balenciaga—evoked the flamenco tradition in the duchess’s flouncing, red-tiered gown, which seems to reference Goya’s pensive outdoor portraits of fashionable women like Queen Maria Luisa. The dress is nearly identical to Balenciaga’s stunning layer-cake version from 1952, which gathers three full layers of taffeta. While perhaps not easy to dance in, the character and movement of flamenco are conjured in its architectural volume. 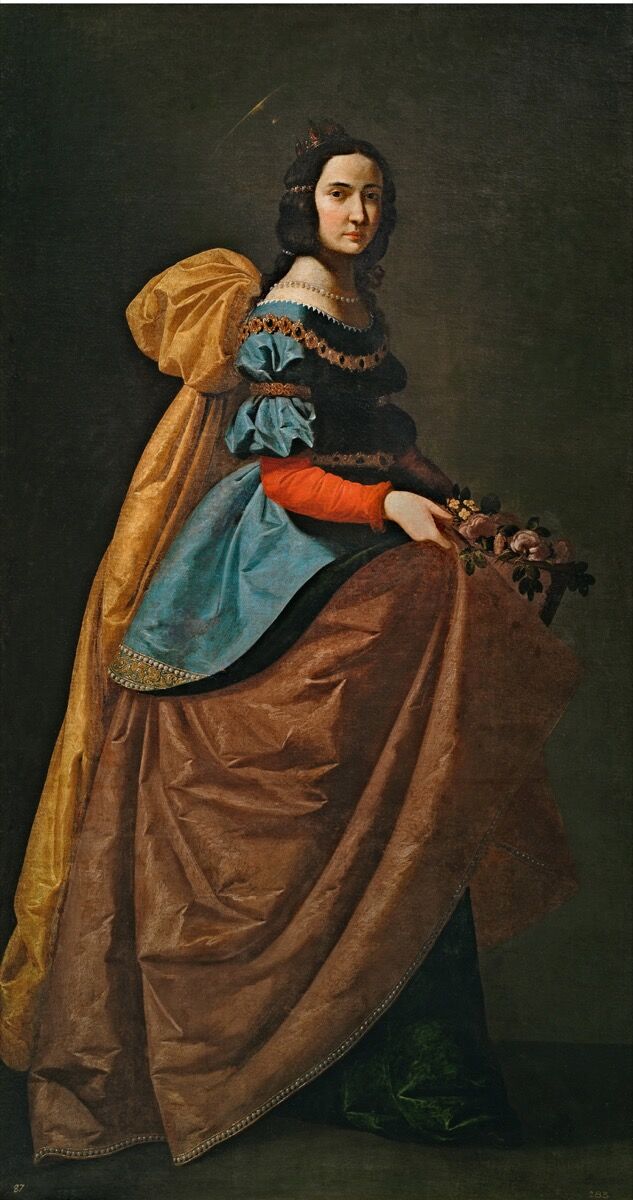 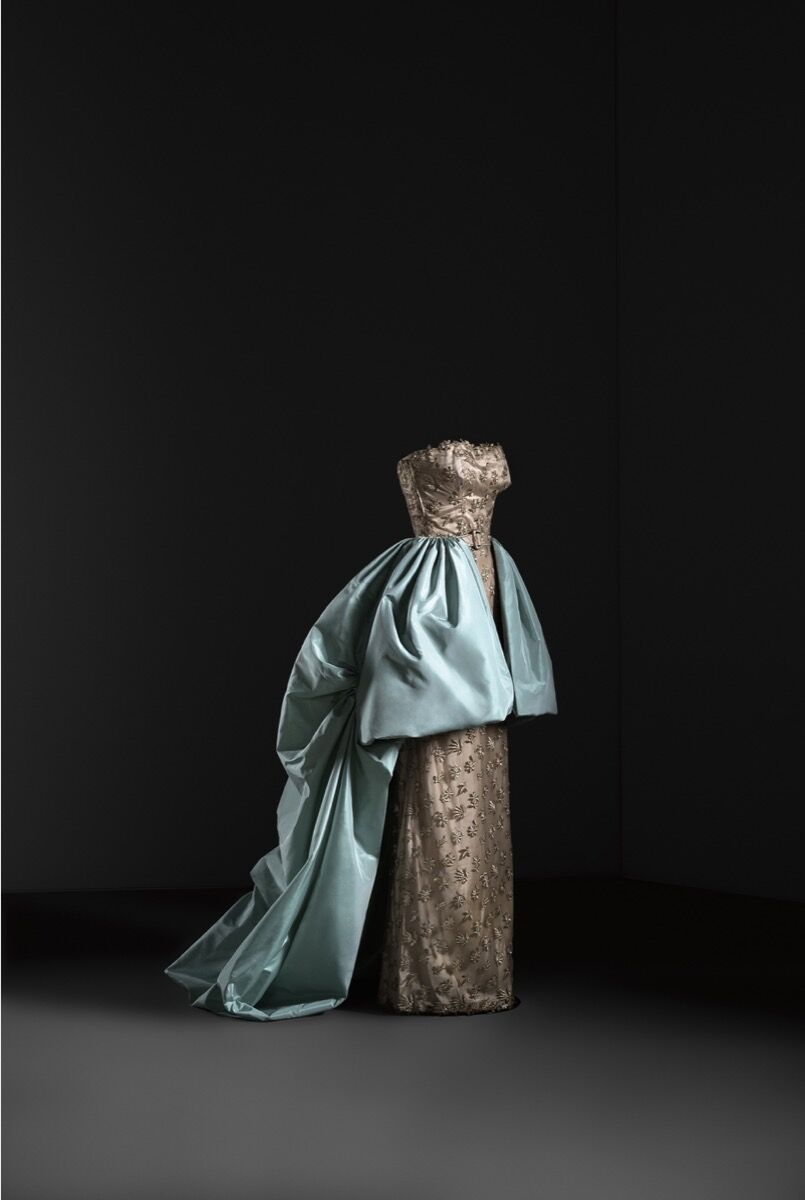 Balenciaga lost his preeminent position as the “king of haute couture” in the late 1960s with the emergence of prêt-à-porter—ready-to-wear fashion popularized by Yves Saint Laurent. The fashion house lives on, however, under the direction of Vetements provocateur Demna Gvasalia. Under his direction, Cristobal’s modern update to the Spanish artistic tradition has been radically transformed: The most popular item offered by the brand today is a pair of oversized Triple S polyester sneakers that cost nearly $1,000, a far cry from the luxe fabrics and meticulous detail Balenciaga imbued in his own pieces.
Yet Balenciaga’s work offers contemporary audiences something other than fashion inspiration. The exhibition reconsiders art history from a more fluid vantage point, one in which painters have exerted as much influence on fashion as the other way around. In our era, fashion and art have never been more entwined, both in the retail business and the popular imagination. This reconsideration has taken hold broadly, with a proliferation of style-minded Instagram accounts that dissect fantastical material moments in artworks both beloved and unknown. Balenciaga understood early on that painting, representation, and fashion are inextricably linked—an intoxicating combination that can speak at once to the past, present, and future.
Julia Fiore
Related Stories 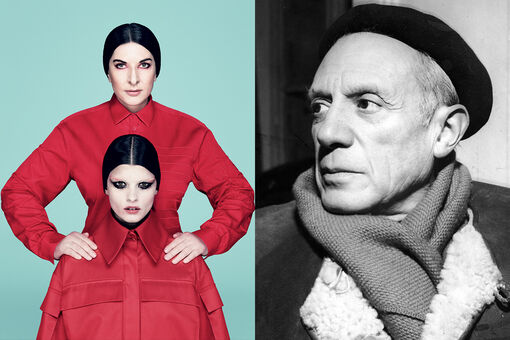 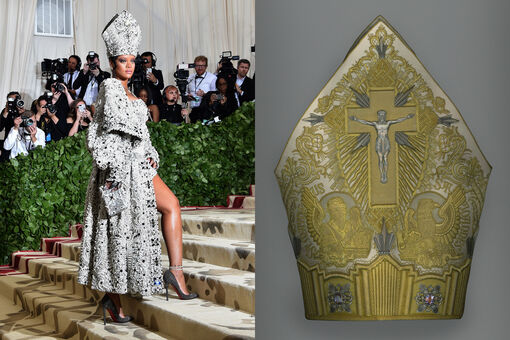 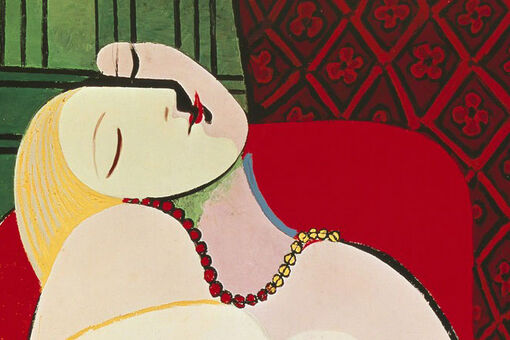