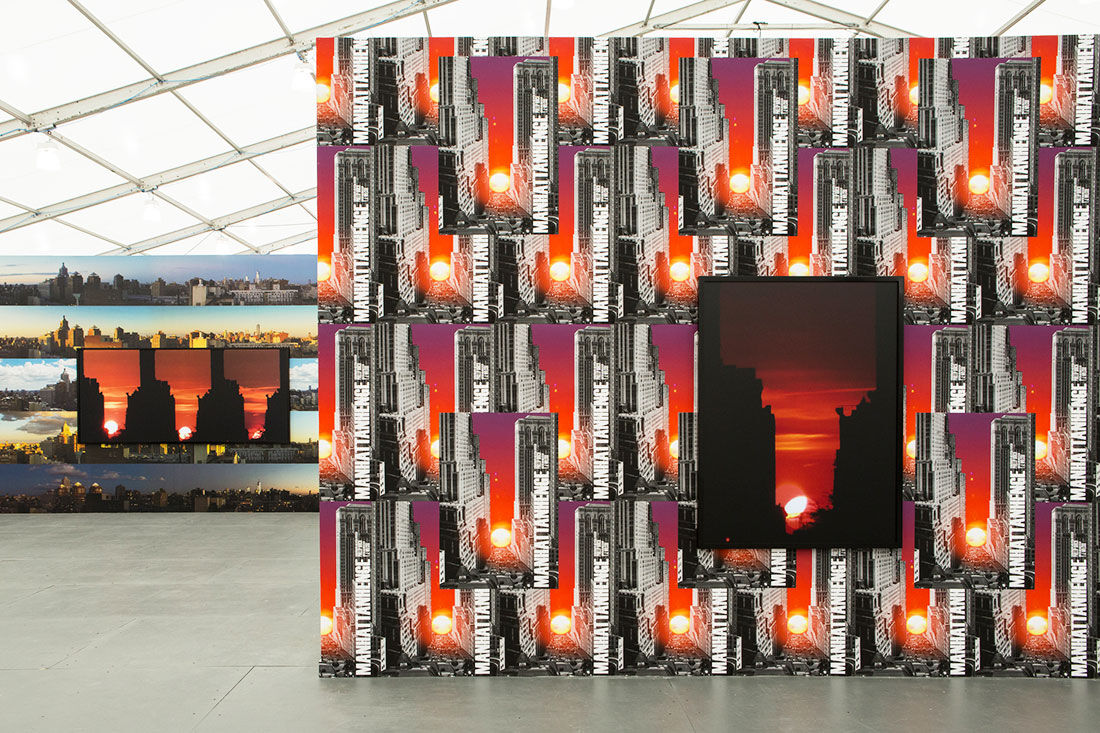 These days it seems that a certain set will only make a voyage to go see art if they’re escorted there via boat (just kidding). Certainly, though, a considerable chunk of the tanned and preened faces on HMS Frieze (a.k.a. the New York Water Taxi) en route from midtown Manhattan to Randall’s Island, where the contemporary art event has once again staked its tent, were fresh off Venetian vaporetto. And with the curatorial and mercantile art extravaganzas back to back, surely it’s no surprise the American iteration of the European fair emitted more than a whiff of Biennale buzz.
Frieze New York opened on Wednesday not to a market made weary by Campari Spritz, as some swanky sailors pondered en route. Rather, once docked and inside, a packed maze of the international art set—gallerists, collectors, artists, and Leonardo DiCaprio—whizzed about, picking favorites and pondering purchases. Transactions were robust and plentiful, though not exorbitant—perhaps a shell-shock scoff at the $179 Picasso sold at Christie’s two nights before. Nearly every gallery, whether blue-chip or fresh-faced, had placed works into collectors’ hands by the time the Pommery popped, marking the witching hour of the evening’s vernissage, when less deep pockets are permitted to spill into the aisles. 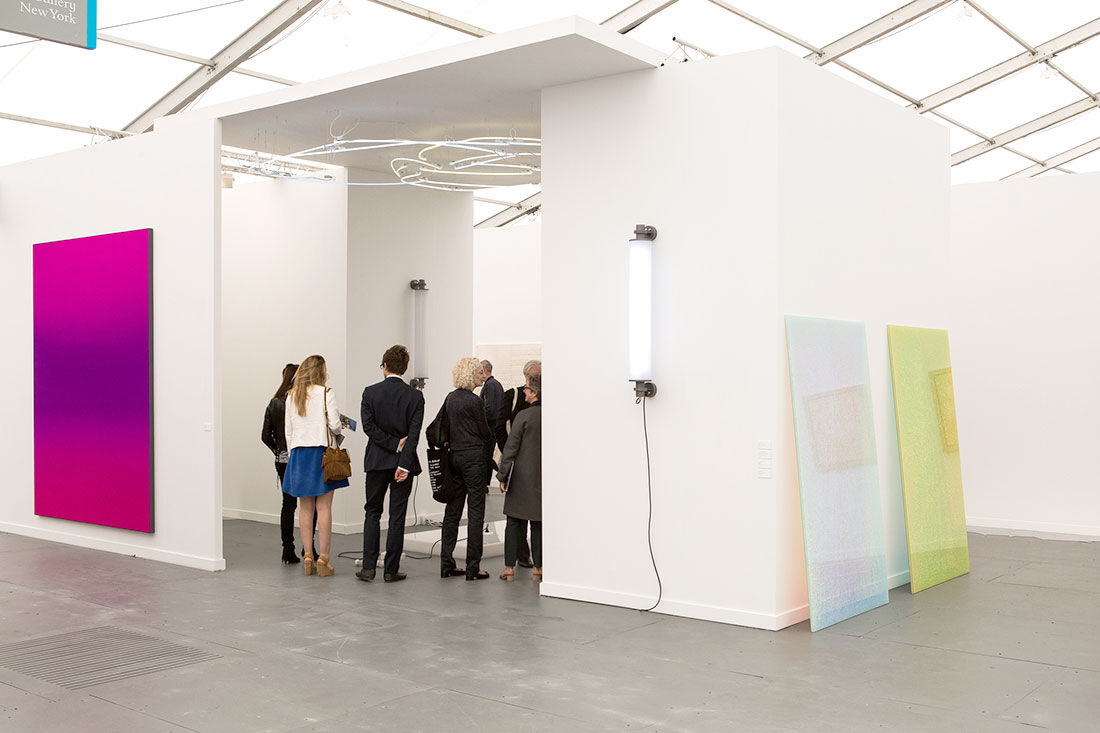 Nowadays, a fair like Frieze is not so much a simple marketplace of fresh picks from dealers’ storerooms; artists and works require timely happenings, a show at a grand institution here or lauded biennial there to justify inclusion. The curated mindset reads like a calendar checklist—for example, why is Kara Walker at Victoria Miro? September marks Walker’s first solo show with the London contemporary queen, and she also so happens to be staging Norma in Venice’s Teatro La Fenice (opening May 20th). Actually, Miro’s entire booth is dedicated to her artists who are participating in or around the 56th Venice Biennale, especially from Okwui Enwezor’s honor roll in “All the World’s Futures” (ATWF): Chris Ofili, Isaac Julien, Sarah Sze, and
Wangechi Mutu
.
Esther Schipper, Berlin’s perennial career catapult, went so far as to bring out Philippe Parreno’s lights, which in Venice serve as both literal and metaphorical guides through ATWF. The series includes 50 works in total—around 15 of which are in the Biennale. At $15,000 each, they are rather affordable (and “easy to install,” a sales director notes) for the artist, who also overtakes the Park Avenue Armory come June, with his largest immersive experience staged in the U.S. to date. Many found new homes in Frieze’s first hours. 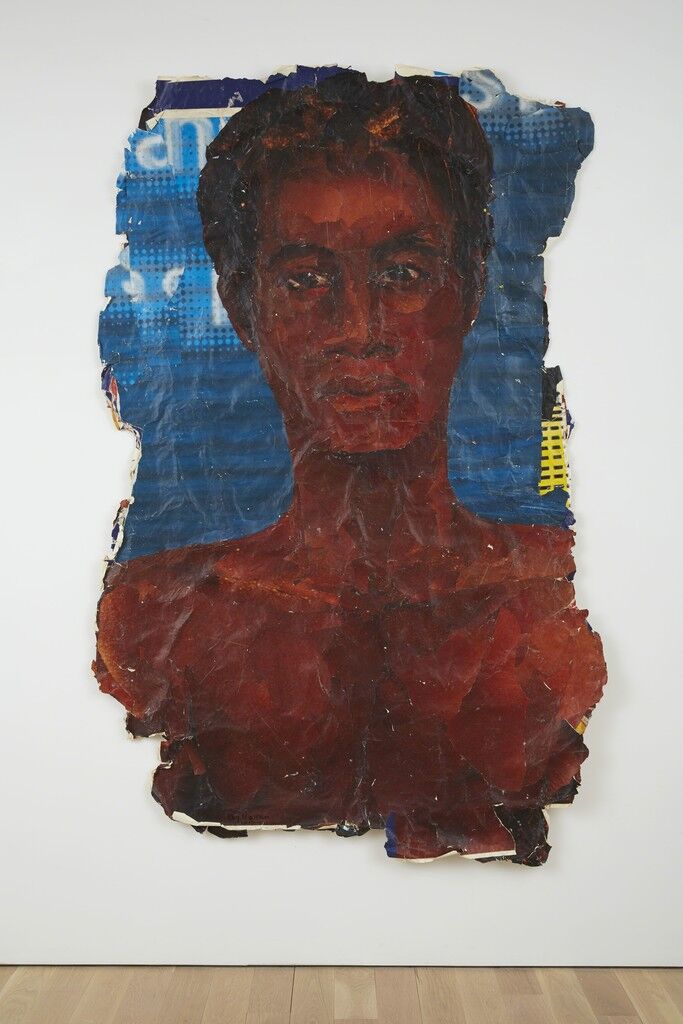 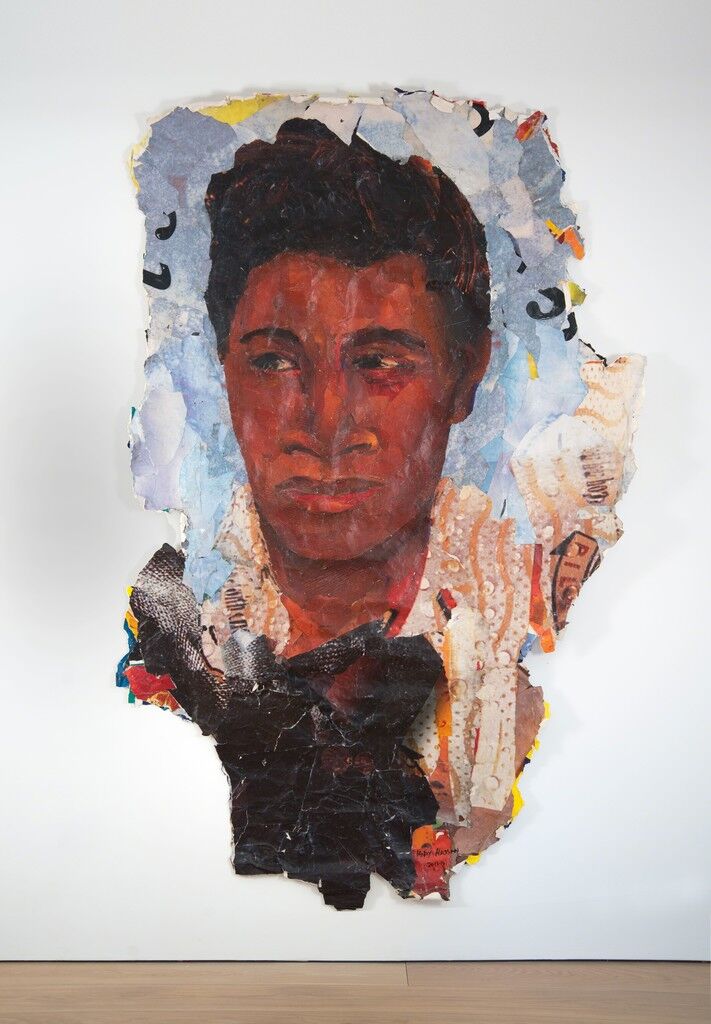 Kay Hassan
Untitled, 2013-2014
Jack Shainman Gallery
Advertisement
Another standout playing the ATWF card is Kay Hassan at Jack Shainman. Hassan shows patchwork collage reinterpretations of Roman funerary portraits in Venice. Back in New York, two large-scale untitled works of the series went into private hands last night. Naturally, there were countless other examples of galleries that lauded their Venice hits. But luckily, the Biennale wasn’t the only chord struck throughout the fair.
Prevailing market trends continued: ceramics, ceramics, ceramics. The best examples included Peter Shire’s splatter paint pots at Peres Projects, Dan McCarthy’s face urns at Anton Kern and Erika Verzutti—whose work is also on currently view at the SculptureCenter—at Galeria Fortes Vilaça. Trees also, mark a veritable trend (and not just
Céleste Boursier-Mougenot
’s moveable ones for the French Pavilion). Giuseppe Penone’s enacted a full-booth forest transformation at Marian Goodman’s booth. (The works are, however, sold individually.)
And luckily, some expected art fair clichés were nary to be found—no
Yayoi Kusama
pumpkins, neon mirror selfie bait, or ever-tempting candy art. Instead, art that crosses over into the realm of design stuck out, perhaps a nod to the slew of contemporary design happenings in the offing this week, Collective, Sight Unseen, and International Contemporary Furniture Fair among them. David Nolan Gallery, for example, showed two stunning examples of Richard Artschwager’s calf-hide reading Chair/Chair from 1990 ($75,000). Artschwager dived deep into the realm of design in the 1990s, and these chairs are a prime example of his minimalist humorous style he developed (much like his sculptures). According to gallery associate George Newall, the pair hail from a private New York collection and are editions 66 and 67 of 100. A few buyers were seen buzzing around the pieces in hopes of bringing them home.
Artschwager wasn’t the only conceptual sculptor to jump into the carpentry trade.
Franz West
, the Austrian absurdist, also created a chaise and a couch or two in his day. In addition to a salon-style hanging of his works on paper, David Zwirner dug into West’s archive so patrons could get comfy in his twisted-wrought-iron with beige linen loveseats ($70,000), banquets ($30,000), and even a circular coat rack, all stemming from the late 1990s. According to the gallery, quite a few already have been snapped up by collectors. 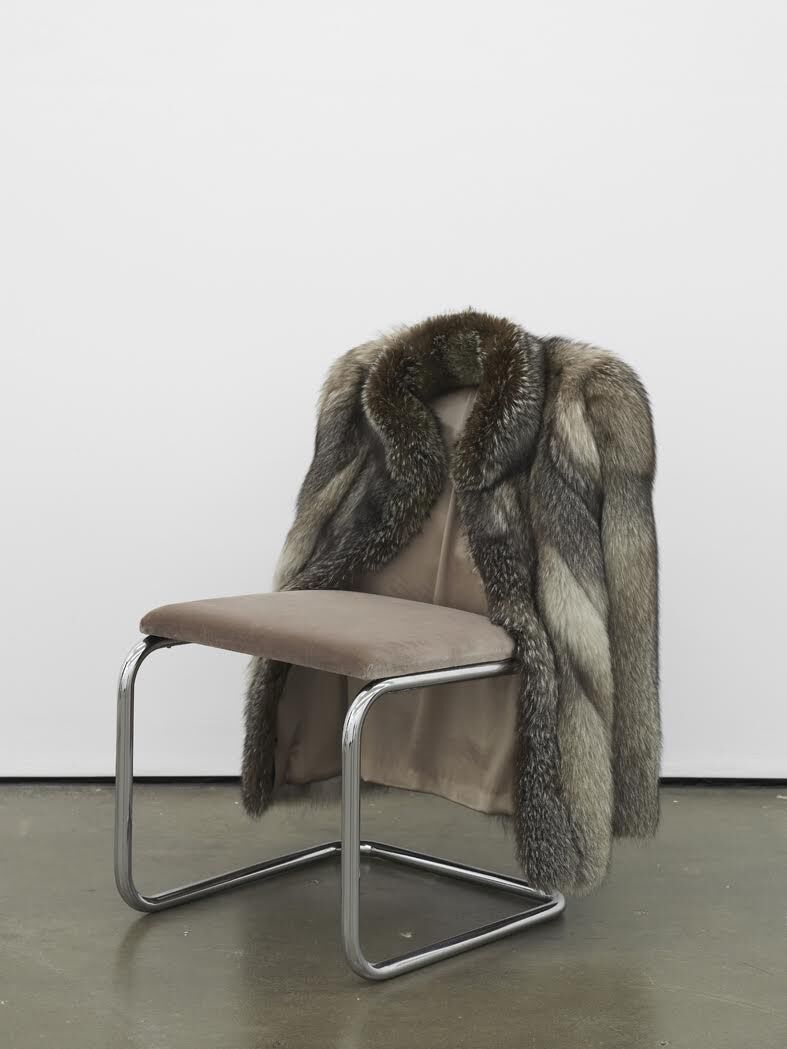 Over in Herald St’s booth, young Nicole Wermers reinterpreted a classic 1928 Marcel Breuer Cesca chair (for German manufacturer Thonet) by draping the simple frame with a vintage fur coat. Billed more as an “artistic intervention” than a functional seating option, the £12,000 works are said to recall
Eileen Gray
,
Charlotte Perriand
, and Lilly Reich, reinserting the feminine voice into the male-heavy architectural scene.
Mary Heilmann
’s “Rietveld-Remix” chairs at 303 Gallery put another female voice in the mix. If you weren’t lucky enough to take home the multi-thousand, multi-color recliner, head to the new Whitney museum where, on the city-facing patio, her renditions are available for sun-soaking and feet-resting alike. 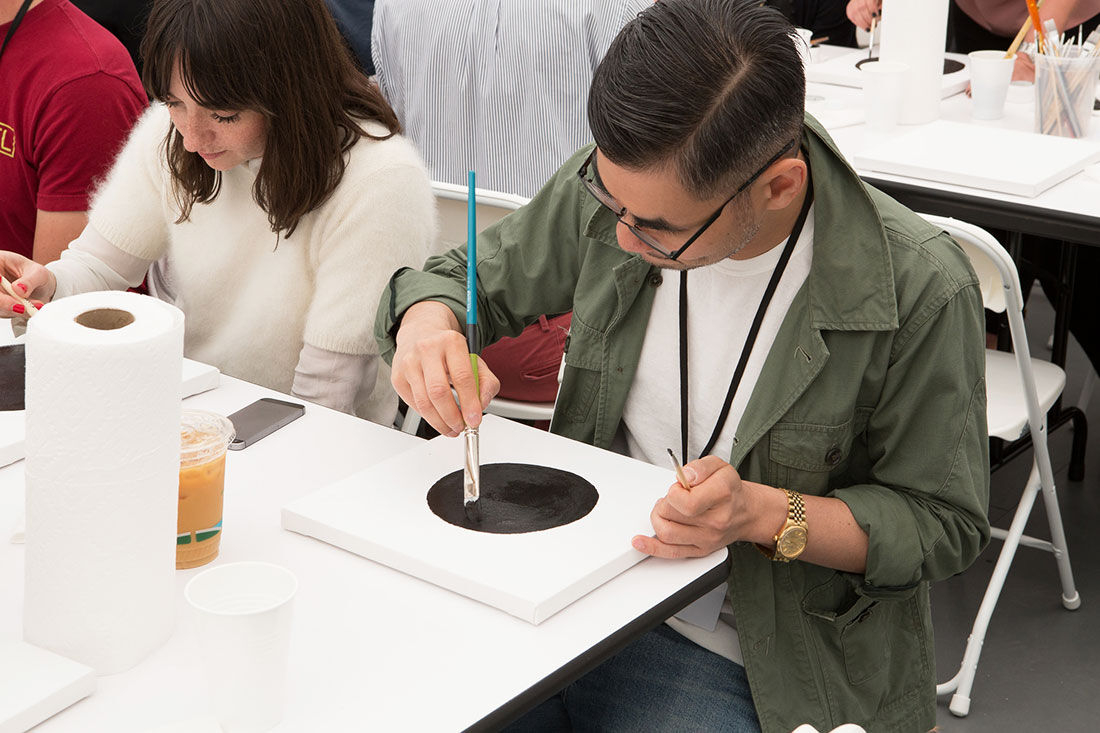 Speaking of the Whitney,
T.J. Wilcox
, a newcomer on Gladstone Gallery’s It list, created wallpaper from his “In the Air” exhibition at the old Marcel Breuer building in an edition of six, prices undisclosed. According to the gallery, Wilcox will scale the sheets—time-lapse stills of the city’s skyline—to fit the wall of the collectors who take the piece home. Conversely,
Martin Creed
will hand his collector a set of instructions—the corresponding Pantone color, design, and roller width needed to make each—for installing his wall paintings, showing at Hauser & Wirth’s booth. Creed is so adamant about proper production that he is willing to come execute the work himself. Some say control freak, I say: arts n’ crafts with Martin Creed is, alone, worth the piece’s price.
In the case of Jonathan Horowitz, he’s getting fair visitors to do the work for him. Slave labor this is not; the 700 chosen ones who painted a black dot on a 12”x12” canvas were each tossed a $20 check for their time, which doubles as an edition itself. His 700 Dots, iterations of which he’s conducted in the last two years, at Gavin Brown’s Enterprise reflects a growing trend (or gimmick, we’re not sure) called participatory art. 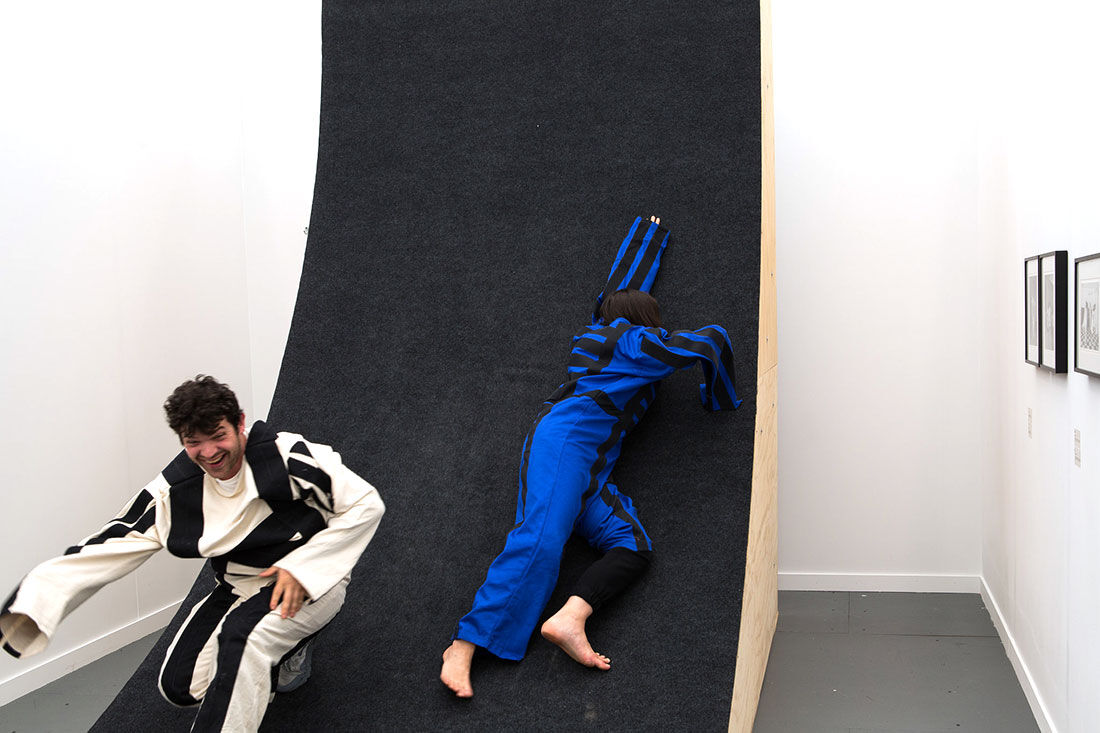 Remember, Adrian Piper did just win the Golden Lion for her game-based interactive work, The Probable Trust Registry in the “All the World’s Futures.” Throughout the fair, there were other amusing examples, the best which might be Martha Araújo’s large Velcro slide at Brazilian Galeria Jaqueline Martins, or Pia Camil’s kooky poncho giveaway, or even
Aki Sasamoto
’s soul-searching quiz, the latter two both part of the fun-laden Frieze Projects.
Last year, Frieze co-founder Amanda Sharp remarked that Frieze promotes a state of play. This time around, that sentiment was taken quite literally, which, considering the serious tone of the Biennale, might not be a bad thing. Frieze is, after all, an art fair—it may be serious business, but it certainly needn’t be stiff.
Julie Baumgardner
Explore Frieze New York 2015 on Artsy.
Related Stories