How Venetians Are Reinvigorating the Rich Traditions of Murano Glass 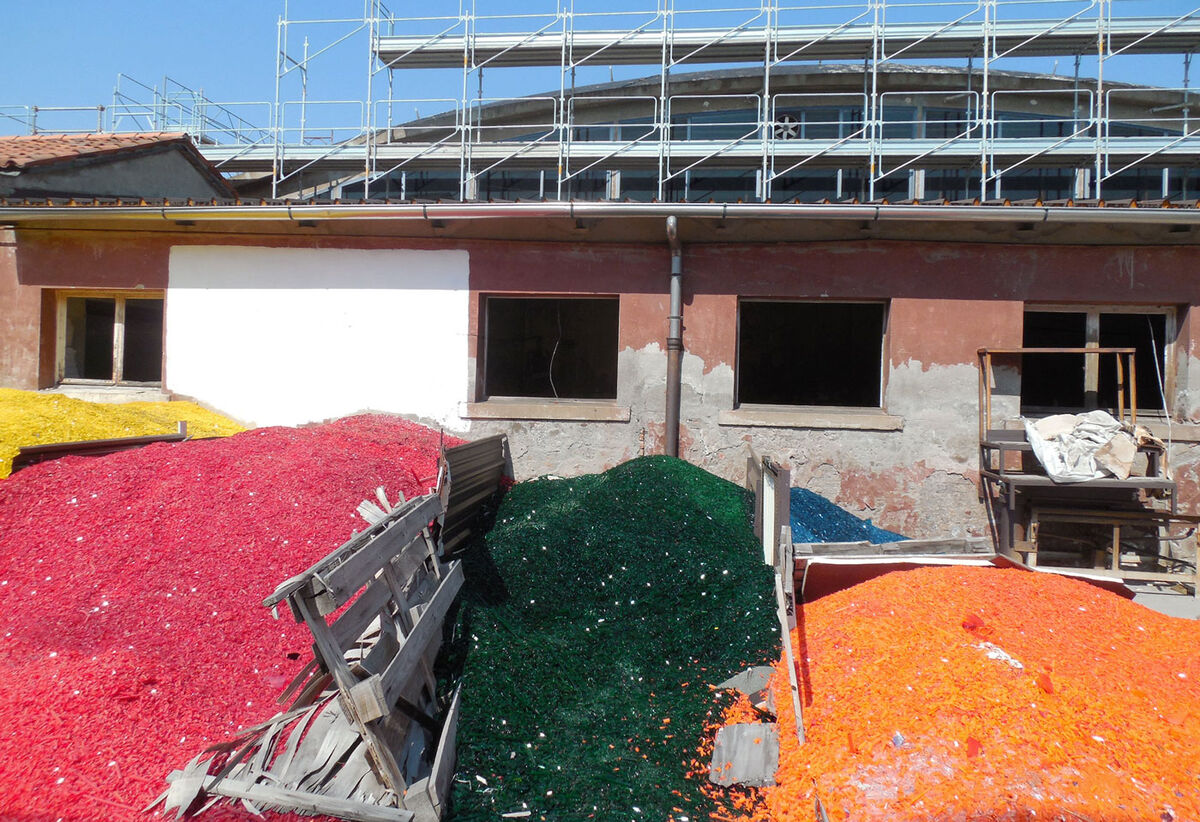 Glass shards in the courtyards at Effetre Murano furnace.

On the Venetian island of Murano, the storied glass workshop Specchi Veneziani Barbini is known for making ornate, engraved mirrors. Their gleaming designs range from elegant rectangles etched with delicate foliage motifs to
Rococo
-esque pieces draped in flowers and ribbons, like icing on a cake. The family-run workshop was founded by Nicolò Barbini in 1927, and is now run by his kin; but the family’s esteemed Murano glass lineage stretches back centuries. In 1665, several Barbini ancestors were secretly whisked away to Versailles to work on Louis XIV’s legendary Hall of Mirrors.
The high-profile expedition needed to be covert because for centuries, Venetians heavily safeguarded the trade secrets of Murano glass. In the late 13th century, a guild was born to protect the industry; and later, laws passed to move all of Venice’s glass furnaces to Murano, and to prohibit its glass masters from working elsewhere. As new generations came of age, the secrets were passed down from father to son. Even now, family-run establishments are common, but these days, Murano glass needs a new kind of safeguarding. 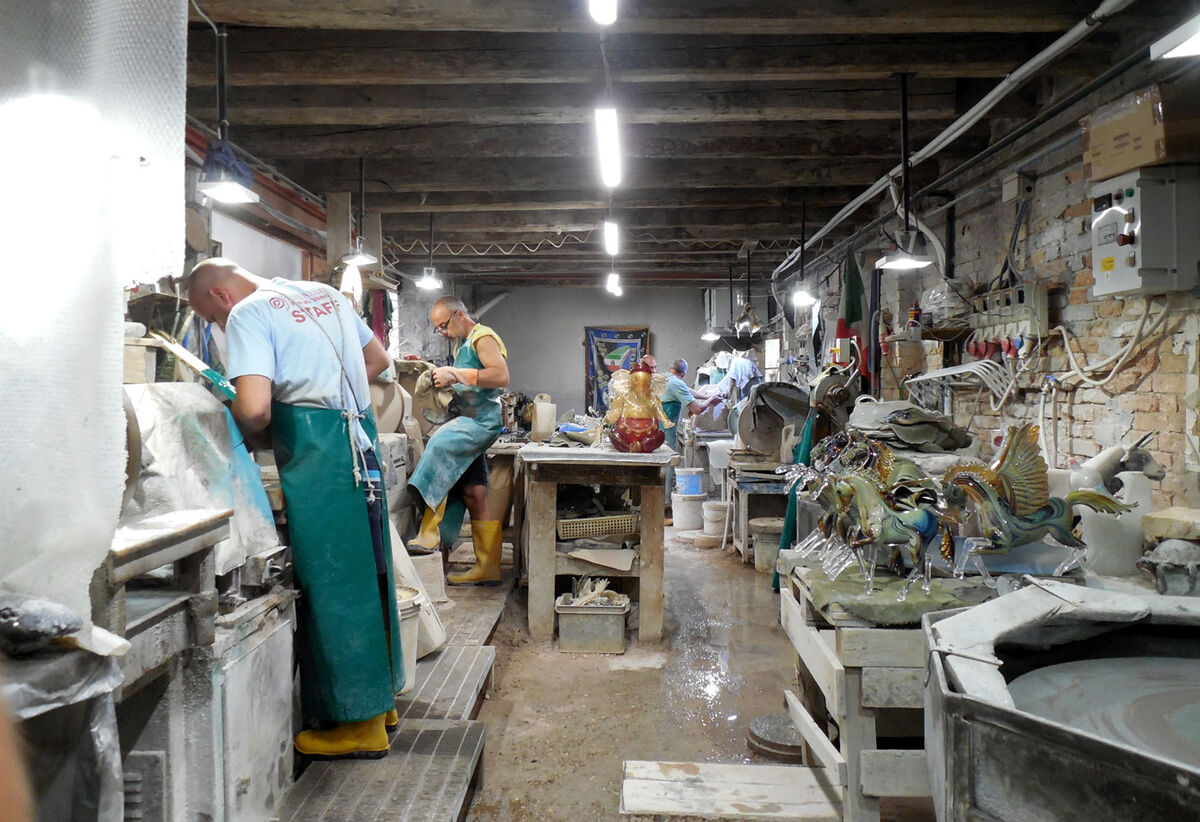 The finishing workshop at the Zanetti Murano furnace.

While there were hundreds of furnaces producing glass a few decades ago, now there are only around 50. Various factors are to blame: Rising production costs, the proliferation of mass-produced, cheap glass trinkets made in China, and a scarcity of collectors. Despite its rich traditions, Murano no longer represents the forefront of artistic glass, as new international hubs have arisen.In response, in the past decade or so glass furnaces have embraced openness and innovation; they are more inclined than ever to share their expertise with international artists and designers. And Venetians are building a greater audience for Murano glass. Arts organizations and institutions are working to preserve Murano’s history and raise its international profile through initiatives like Venice Glass Week, now in its third edition this September 7th–15th. 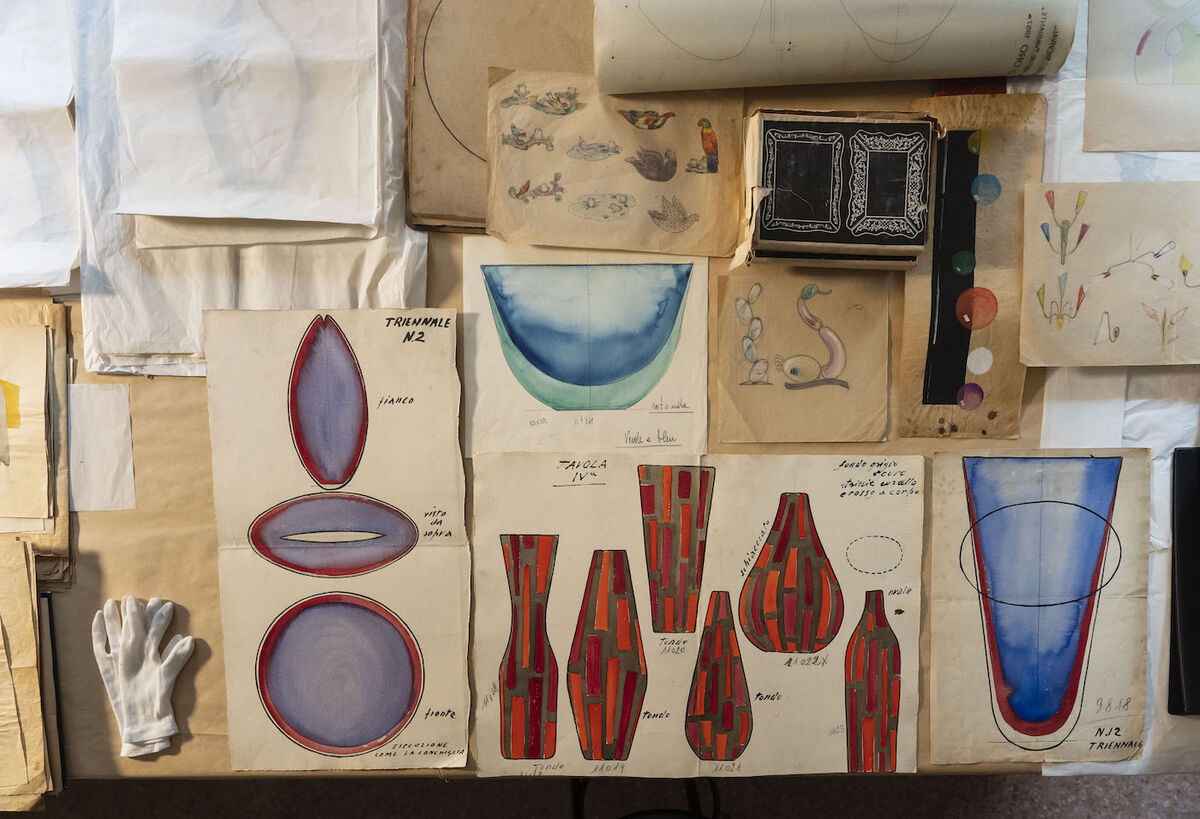 Advertisement
Venice Glass Week co-founder David Landau and his wife Marie-Rose Kahane have been major players in the recent promotion of Venetian glass. The philanthropist couple has a world-class collection of Venini glass—one of the most important glass furnaces of Murano. When they moved to Venice a decade ago, they “were expecting to find a tremendous amount of activity around glass—exhibitions and events, lectures and symposia,” Landau explained. “And when we arrived, there was absolutely nothing at all.”
To rectify the situation, Landau decided to build a kunsthalle for glass, Le Stanze del Vetro, a collaborative initiative of his foundation, Pentagram Stiftung, and Venice’s Fondazione Giorgio Cini. The exhibition space opened in 2012 in a former school building on the island of San Giorgio Maggiore. Its sleek interiors were designed by Annabelle Selldorf and now host two shows per year, one dedicated to a chapter of Venini’s history, and one to 20th- and 21st century glass more broadly. “We thought that would be a way of reviving interest in glass, which seemed to be waning,” Landau offered. “And it did.” 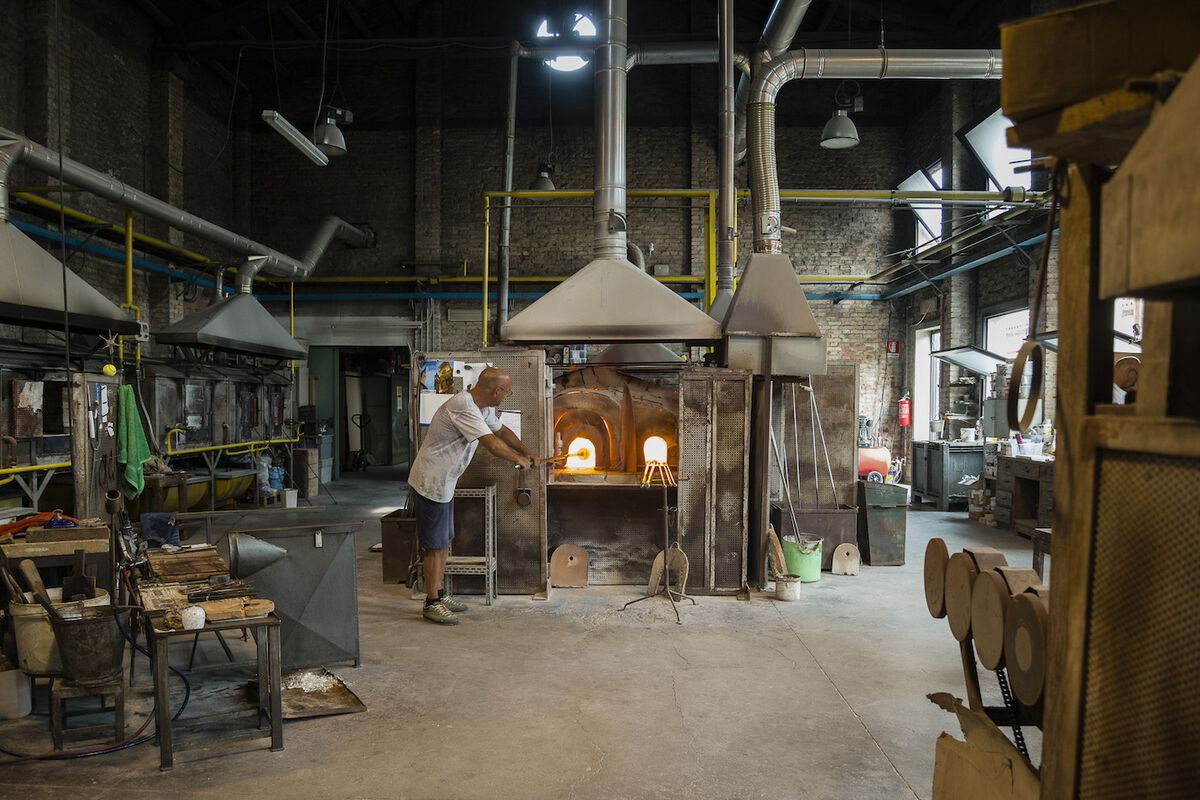 Le Stanze del Vetro has since attracted a 1.25 million visitors and its shows have gone on to such prestigious institutions as the Metropolitan Museum of Art. “These are all people who have, I think, never seen an exhibition of glass,” Landau said. “And so we have created a new public.” They’ve also invested in glass education for thousands of local schoolchildren. And the success of Le Stanze del Vetro led to the formation of Venice Glass Week.

Past Exhibitions at Le Stanze del Vetro
View Slideshow
5 Images
Landau hatched a plan for a glass festival that would engage the whole city. Given that so many institutions are involved, he decided they should all work together to promote glass to the world. “Murano is still making amazingly good glass,” he reasoned, “and it could make even better glass if it had more people coming to see it, and also if it was a challenge again, for glass furnaces to produce better and better things, to attract more refined customers, rather than people trying to buy a five euro piece that was actually made in China, not Murano.” The Glass Week became a collaboration between Le Stanze del Vetro, the city’s civic museums,and Consorzio Promovetro Murano—a consortium of glass furnaces that work together to promote their industry and protect its authenticity. 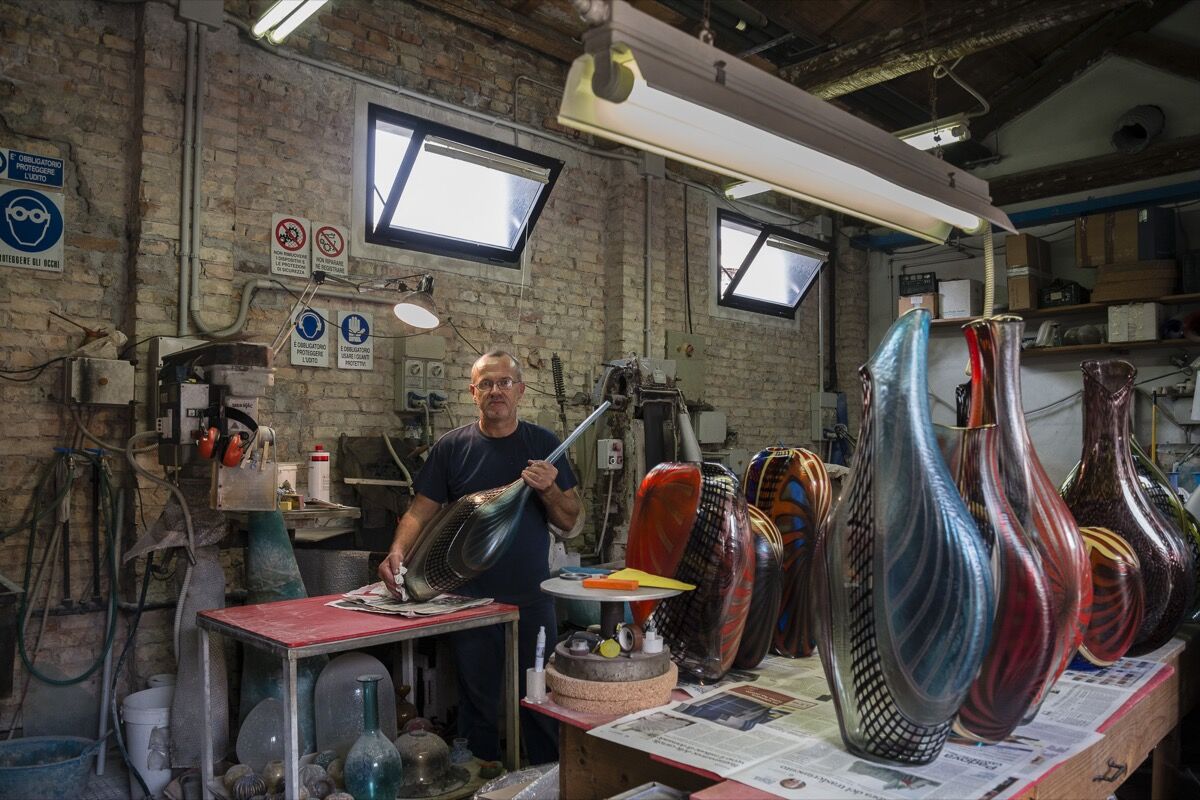 Luciano Gambaro, who is president of the Consorzio Promovetro Murano and co-runs the Murano furnace Gambaro & Tagliapietra, sees Murano’s recent rough patch as simply another obstacle in the industry’s 1,000-year track record. He points to moments in history when glass masters were wiped out by the plague, sent away to fight in the crusades, and hit by a financial crisis in the 19th-century.
The most recent crisis in the 21st century, he explained, led to the emergence of smaller, more sustainable, specialized furnaces, like his own, which is focused on design objects. As we spoke, his lean team was diligently working on a batch of buoyant, emerald-green vases for Dior’s home line. Just next door, the Costantini workshop is devoted to glass beads; and elsewhere on the island, Zanetti is known for its solid glass animals, like jaunty horses, vivid tropical birds, and slick sea creatures. 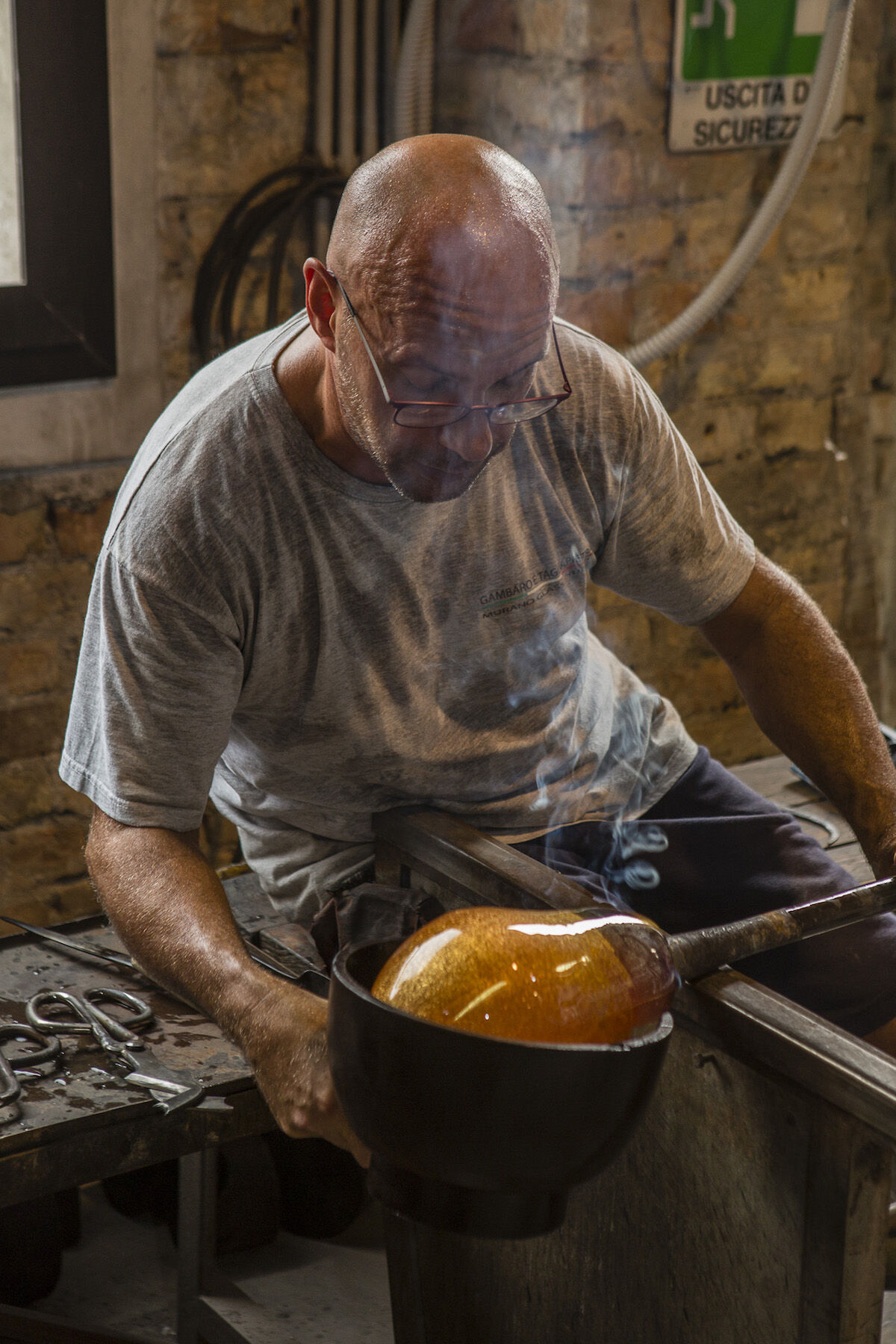 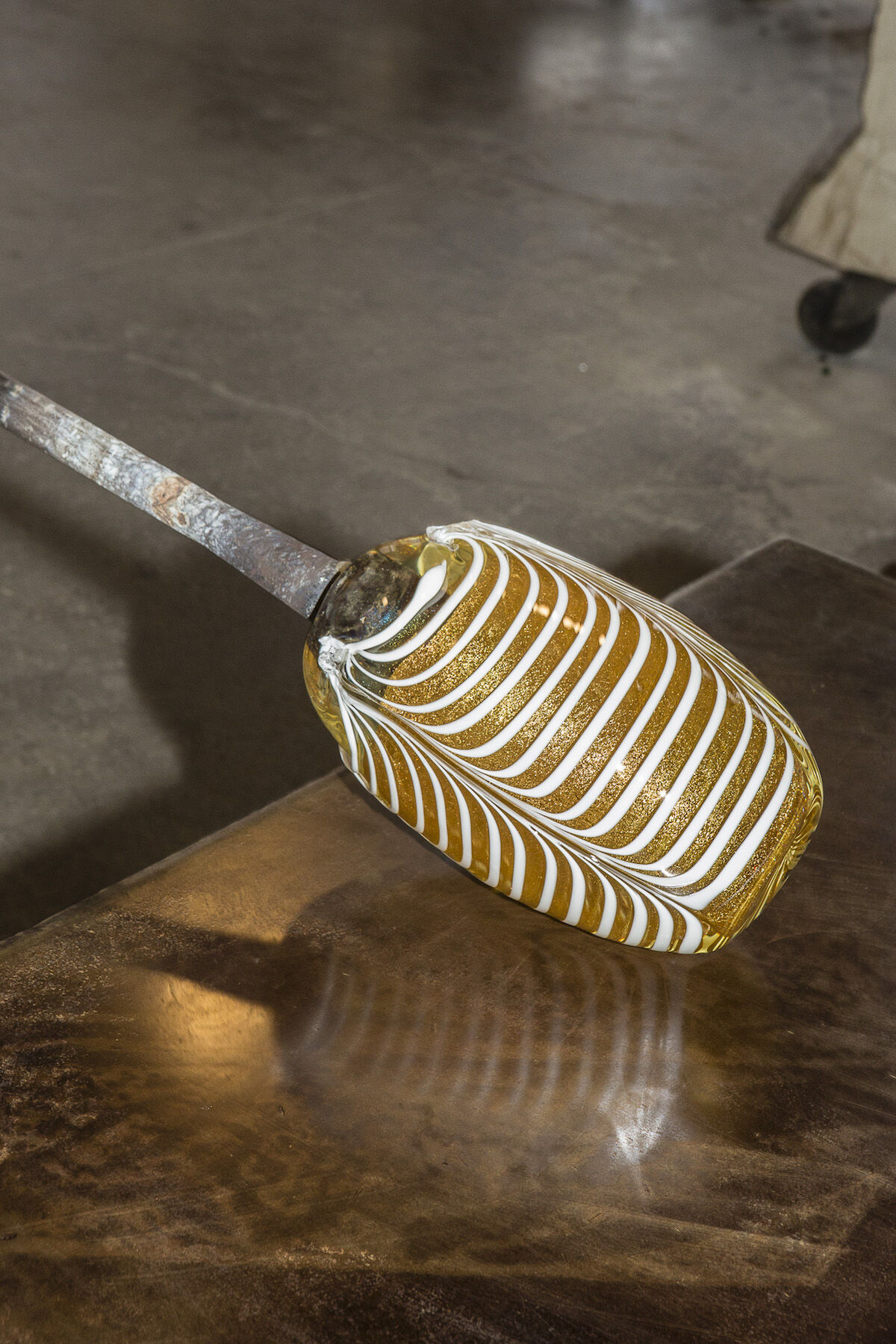 Damian Farnea took over the business side of Zanetti in 2005, when he learned that his father had plans to sell it. The furnace was started in 1956 by the father of Oscar Zanetti, the main glass master who now works there with his own son. Farnea noted that while in the 1980s and 1990s, the business was doing around 80 percent of its business with clients in the United States, today it’s just 10 percent. These days the operations have diversified, regularly welcoming in outside artists to work in the furnace, and selling in a variety of markets; around 40–50 percent of Zanetti’s wares are sold in Venice, while the rest ships overseas, often to China, India, Russia, and Japan.
Gambaro wagers that as with other industries like fashion, consumers today are gravitating towards the handmade, one-of-a-kind aspects of Murano glass. He notes that it was from this current moment of uncertainty that the Venice Glass Week grew.
“Thomas Stearns at Venini” at Le Stanze del Vetro
View Slideshow
2 Images 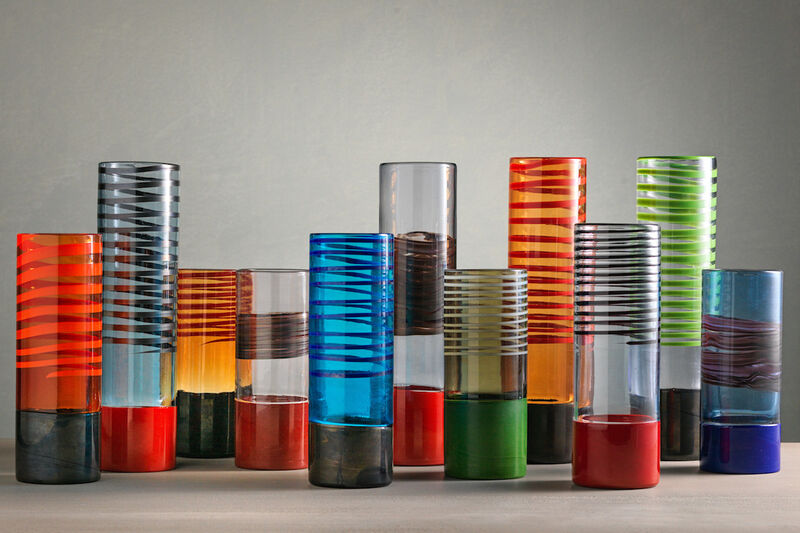 In its first year, Venice Glass Week attracted 75,000 people to its 150 events—including furnace tours, talks, exhibitions, and parties. The second edition saw 91,000 visitors. “It’s something that was so obviously needed,” Landau said. This year’s Glass Week promises an even more ambitious program, which was curated by a jury of international glass experts. Highlights include the Stanze del Vetro exhibition, a showcase of the rare, esteemed work of American glass artist
Thomas Stearns
, who created work at Venini during the early 1960s. 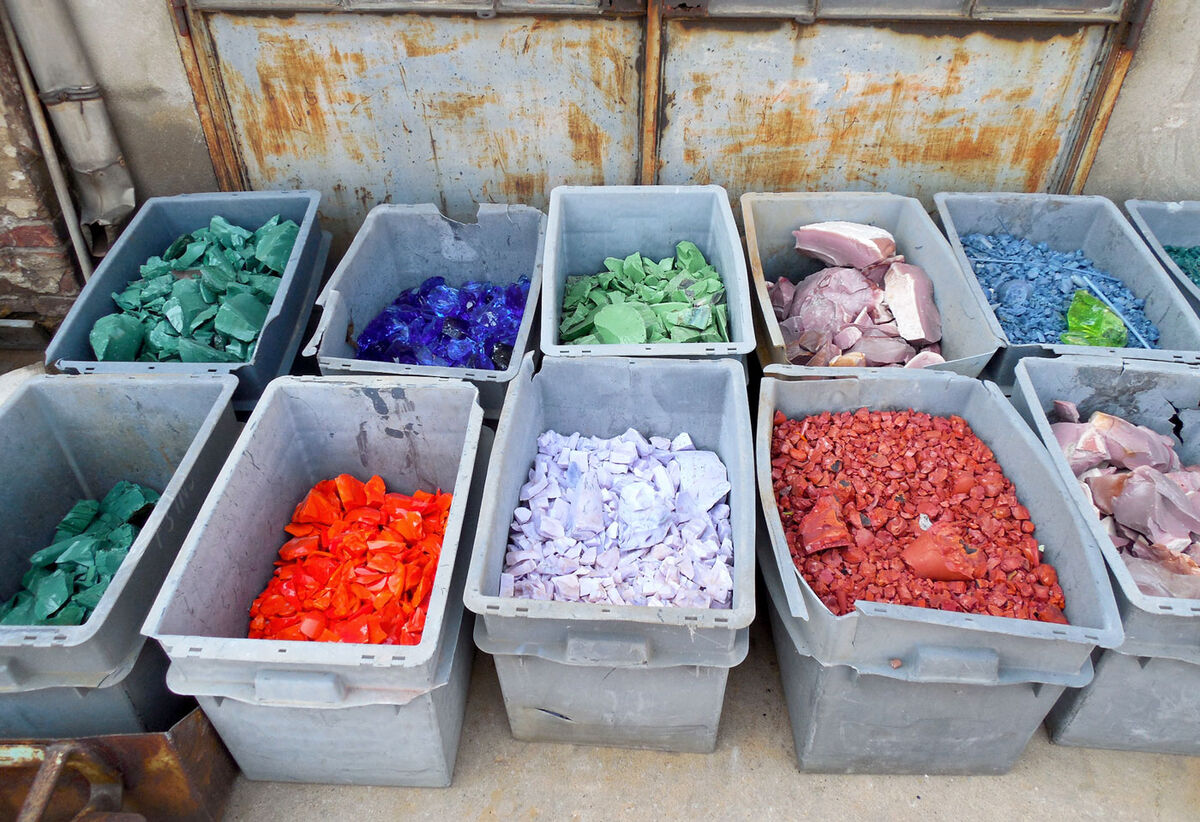 Glass shards in the courtyards at Effetre Murano furnace.

Another main attraction is held at the Effetre Murano furnace, a factory where glass rods are made for the decorative rosettes known as millefiori; its enticing courtyards overflow with color-coded mounds of glittering glass shards. There, the Consorzio Promovetro and the furnace are hosting a show of street artists and glass masters, who created murals and glass pieces, respectively, in response to each others’ work. With an eye to the past, Glass Week also allows the public into Venice’s Glass Study Centre, a treasure trove of drawings, photographs, and documents from Murano’s furnaces.
Inside Fondazione Cini’s Glass Study Centre
View Slideshow
5 Images 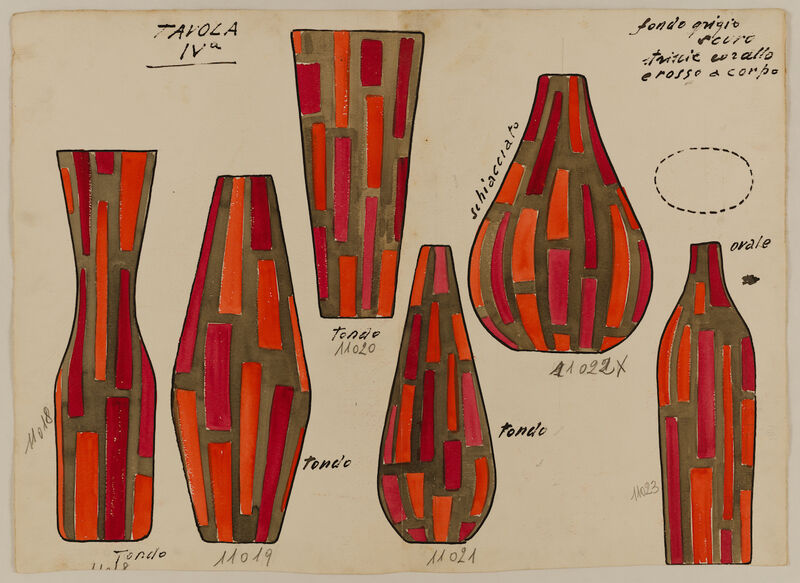 A glimpse at Murano’s future can be witnessed at the Museo del Vetro di Murano, where a large new sculpture made from recycled glass will be unveiled in the garden. The piece was created as part of Autonoma, an educational initiative in Murano that has an exchange program with Pilchuck Glass School in the United States, which brings international glass artists to Murano for workshops. The initiative was started by the 28-year-old glass artist Marcantonio Brandolini d’Adda, a Venice native who runs his mother’s commercial glass business Laguna B. After studying at Pilchuck, Brandolini d’Adda decided to develop Autonoma, as a way to bring international glass artists to Murano and in turn to send Murano’s glass masters to the innovative school in the U.S. 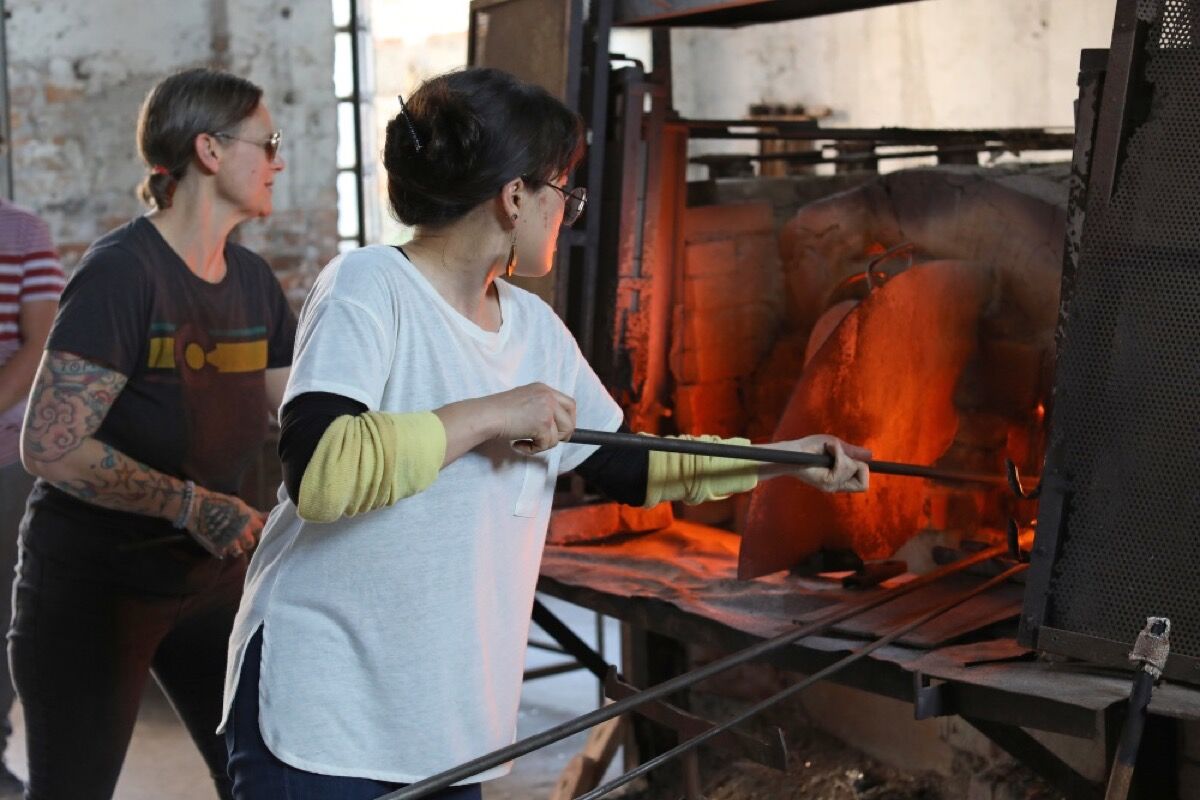 For Landau, such an embrace of international artists and designers is crucial to the future of Murano glass. While it used to be that outside artists would approach Murano’s glass masters “and the first answer to any of their desires was ‘no it can’t be done,’” he explained, “a few people realized that glass should be offered to artists as a medium equal to all others.” Such an attitude has spread. “Artists who had only been really attracted to American schools like Pilchuck and Tacoma, started coming in large numbers to Murano.”
Working with designers and architects is critical, too, Landau added. “If a good designer produces a set of glasses that are beautifully made and novel, they can have a terrific success in markets all over the world,” he explained. And such work can be extremely lucrative for a furnace. Working with talented outside creatives, Landau reasoned, is the “way forward for that will make Murano continue to grow.”
Casey Lesser
Correction: A previous version of this article misstated that Le Stanze del Vetro has attracted a quarter million visitors. It has had 1.25 million visitors.
Related Stories