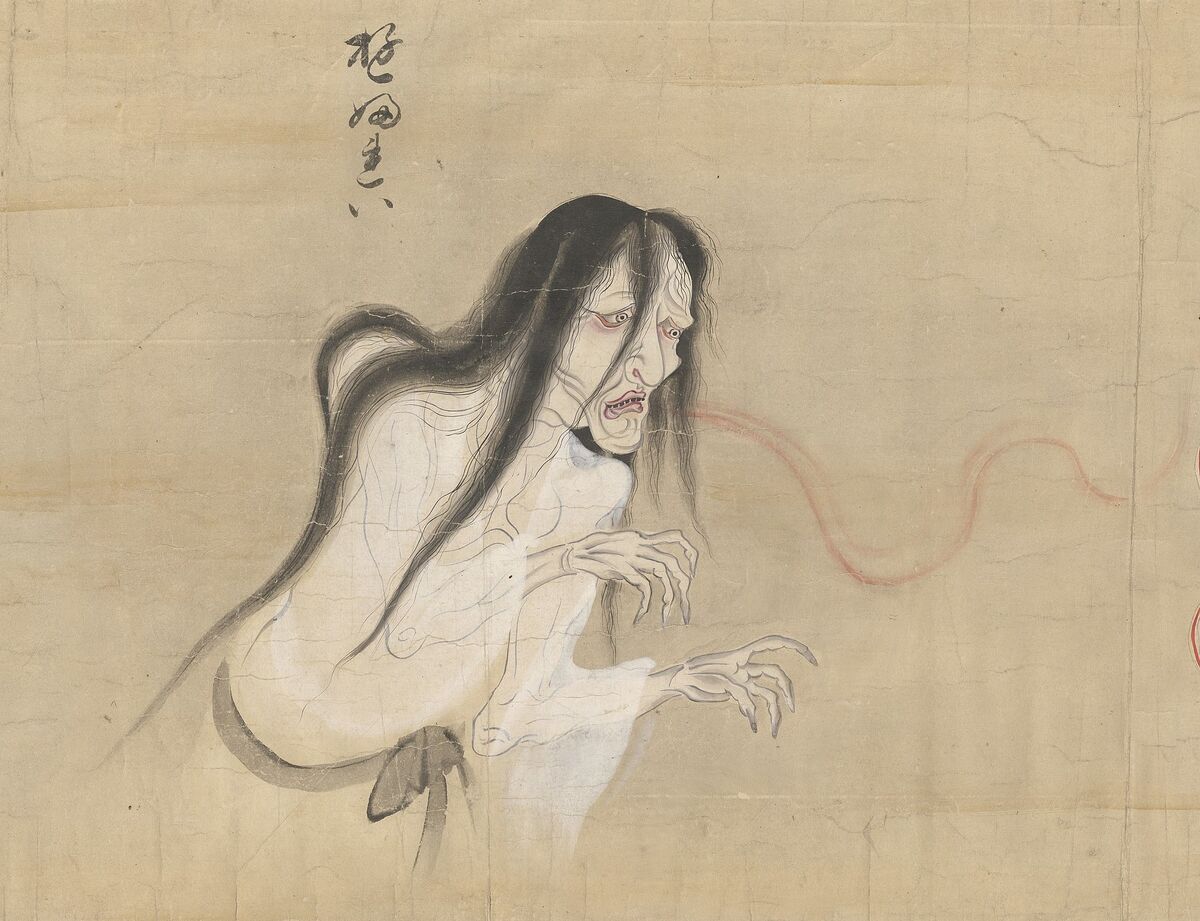 In an 1836
ukiyo-e
print by Japanese artist
Utagawa Kuniyoshi
, a spectral woman floats to the ground from a paper lantern. Her face is disfigured—melting—and her skeletal hands strain towards a thoroughly frightened man. She’s come back from the dead for revenge: to haunt the husband that maimed and murdered her.
The story of Oiwa, Japan’s most famous folkloric ghost, inspired countless, chill-inducing artworks during the country’s
Edo period
.
Konishi Hirosada
showed her clutching the bloody bundles of hair that fell out after her husband Iemon poisoned her.
Katsushika Hokusai
of The Great Wave fame envisioned her as an anthropomorphic, liquefying lantern, mouth agape as if ready to swallow Iemon whole. In almost every depiction, Oiwa reduces Iemon to a cowering ball of pure fear. As the tale goes, she haunted him relentlessly until he finally fled into the arms of her brother, who slayed him once and for all. 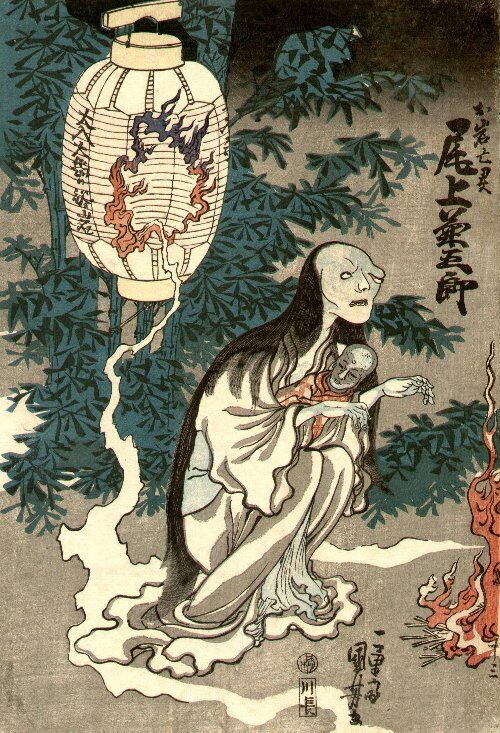 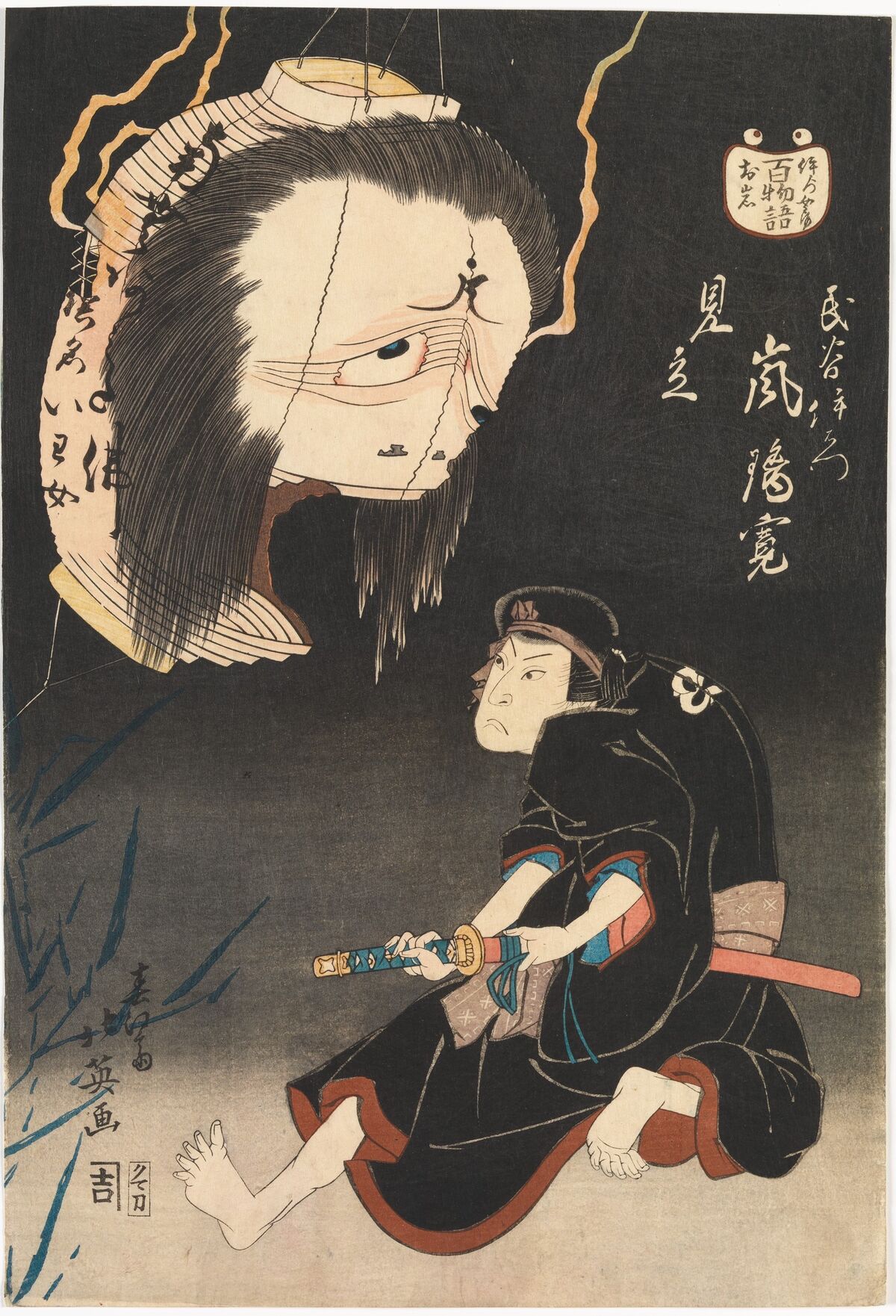 Shunbaisai Hokuei, An Imaginary View of Arashi Rikan II as Iemon Confronted by an Image of the Murdered Oiwa on a Broken Lantern, 1831. Courtesy of The Metropolitan Museum of Art.

Oiwa is just one of many deeply determined, revenge-seeking spirits who fill Japanese art and literature. Known as yūrei, these mostly female ghosts won’t let their male wrongdoers rest until they’ve received a proper comeuppance. As scholar Zack Davisson puts it in his 2015 book Yūrei: The Japanese Ghost, yūrei can “never be destroyed, only sated…they want something.”
Death, and the spirits that emerge from it, are essential to Japanese culture. “The spirits of the dead continue to exist in the unseen world which is everywhere about us,” historian Hirata Atsutane writes in his 1812 book The True Pillar of Spirit. “They all become gods of varying character and degrees of influence.” Temples honoring the deceased dot the country, and yūrei continue to be celebrated each August for Obon, the festival of the dead. In Japanese lore, it’s said that ghosts primarily appear in the hottest, most suffocating months—yes, the “dead of summer.”

Utagawa Kuniyoshi
Takiyasha and Skeleton Spectre in the Ruined Palace at Soma, ca. 1844
Ronin Gallery
Advertisement
When it comes to storytelling, yūrei can be traced far into the recesses of Japanese history. As Davisson explains, “Death and the dead are as essential to Japanese storytelling as love and marriage are to Western traditions.” Take female writer Murasaki Shikibu’s 11th-century Tale of Genji, Japan’s first-known novel and possibly the world’s oldest work of fiction, in which Lady Rokujō haunts the titular character due to his infidelity and unceasingly flirtatious behavior. (Some scholars, like Jakucho Setouchi, have interpreted Genji’s seductions as rape.)
In art, the earliest-known work depicting yūrei emerged in the mid–18th century, during the height of the Edo period, an era of flourishing peace, prosperity, and cultural output.
Maruyama Okyo
’s ink painting The Ghost of Oyuki (1750) shows the artist’s lover, who died young, as an ethereal, floating being wrapped in a white dress and topped with a head of wild, deep-black hair. His rendering would set an aesthetic precedent for all artistic interpretations of yūrei to come. 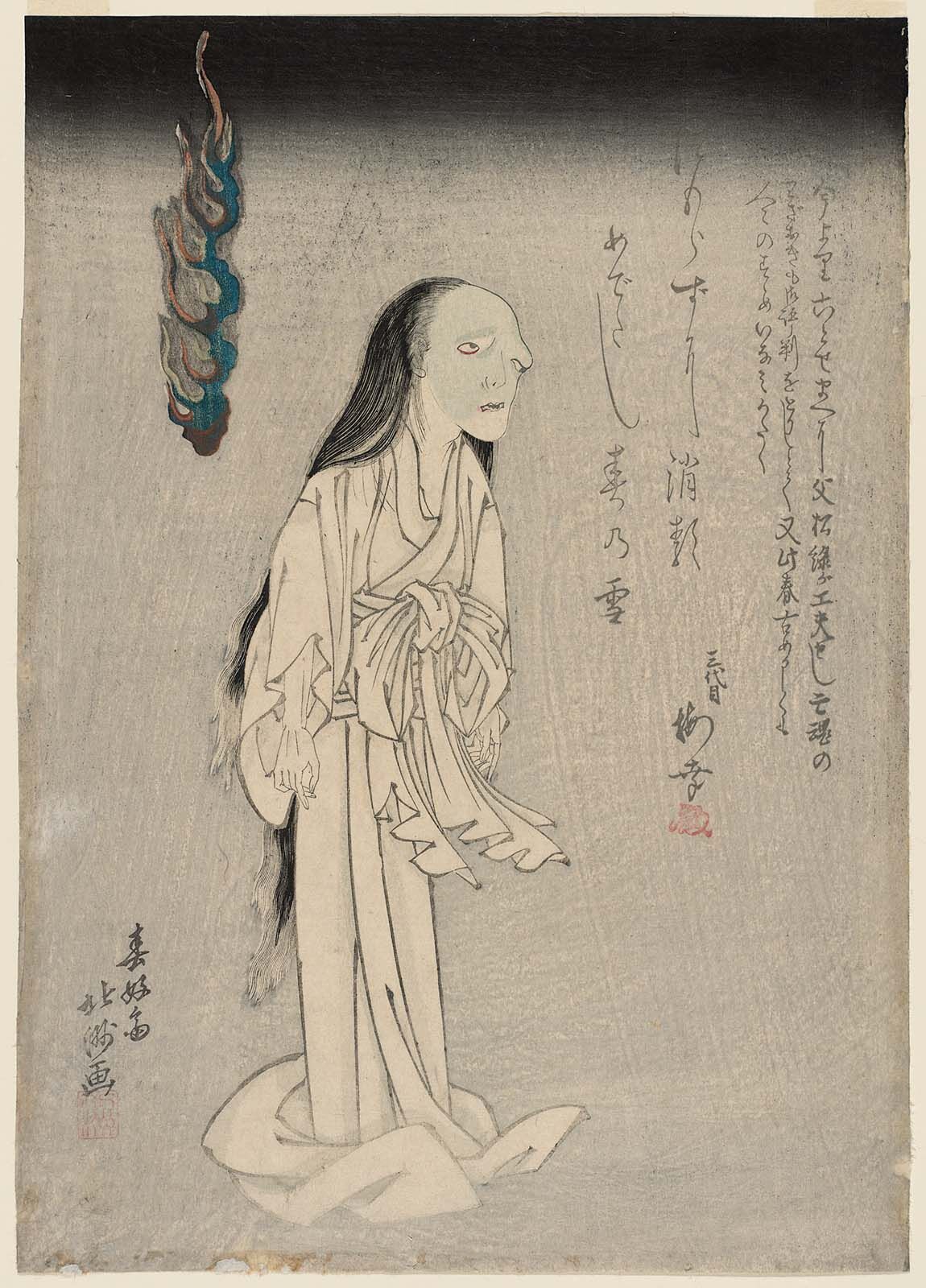 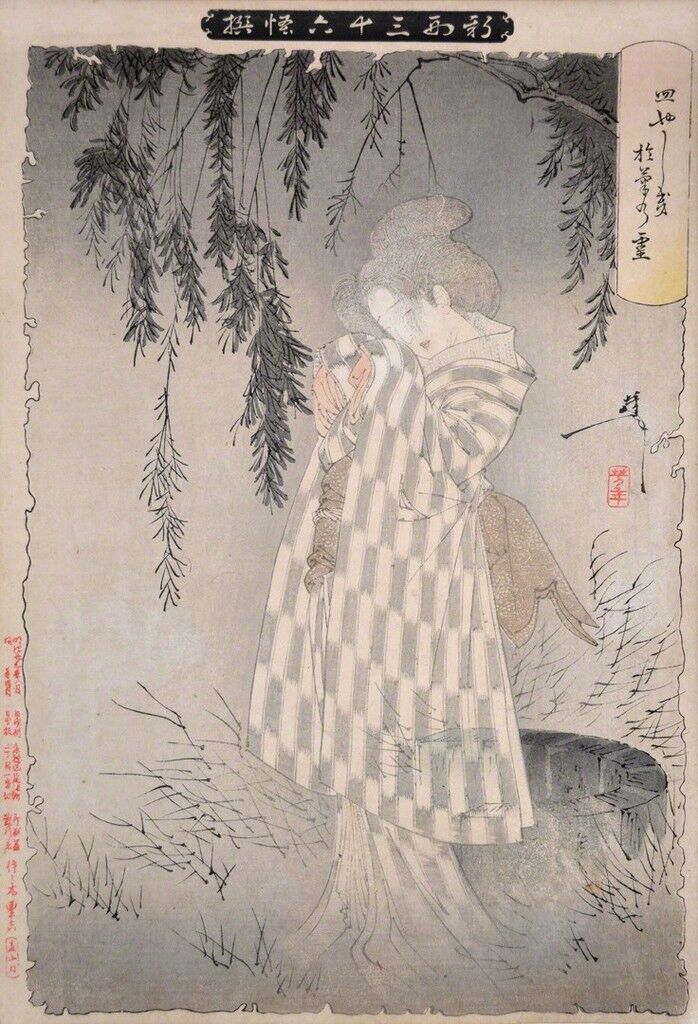 Tsukioka Yoshitoshi
The Ghost of Okiku at Sarayashiki, 1890
Ronin Gallery
Yūrei didn’t become a staple of Japanese art, though, until the early- to mid-1800s, with the rise of ukiyo-e woodblock prints and kabuki theater. Meaning “pictures of the floating world,” ukiyo-e translated kabuki actors, folklore, courtesans, city life, and erotic encounters into intricately detailed, imaginative compositions. Many ukiyo-e artists drew directly from the most dramatic, spine-tingling scenes of kabuki performances, selling the resulting prints as souvenirs at the theater.
One of the Edo period’s most popular plays was Tōkaidō Yotsuya Kaidan (1825), which told the story of Oiwa’s ghost in graphic detail. The play thrilled audiences with its portrayal of the tale, which was based on “real” local ghost stories. Still, in order to avoid being cursed, the actors made sure to pay their respects to the grave of the real woman on whom the Oiwa character was based. In 1826,
Shunkôsai Hokushû
created one of the first artistic representations of Oiwa’s vengeful tale. In his print, her black hair streams down the back of her white robes, which seem to levitate, and her disfigured face looks both deeply pained and hell-bent on retaliation. 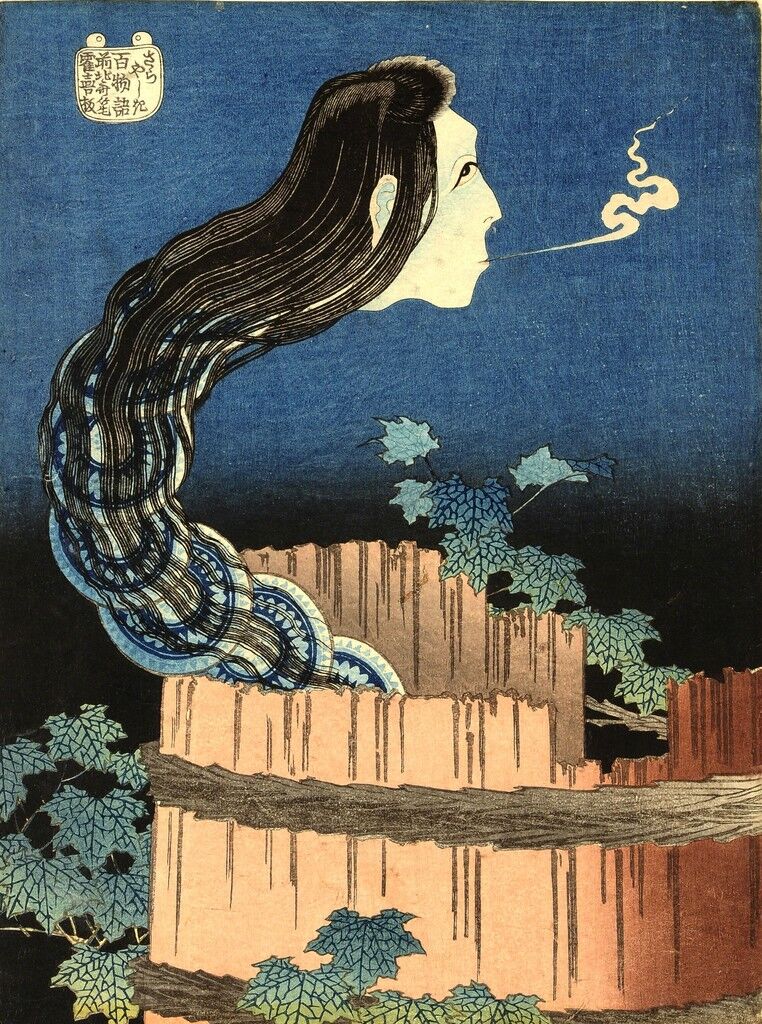 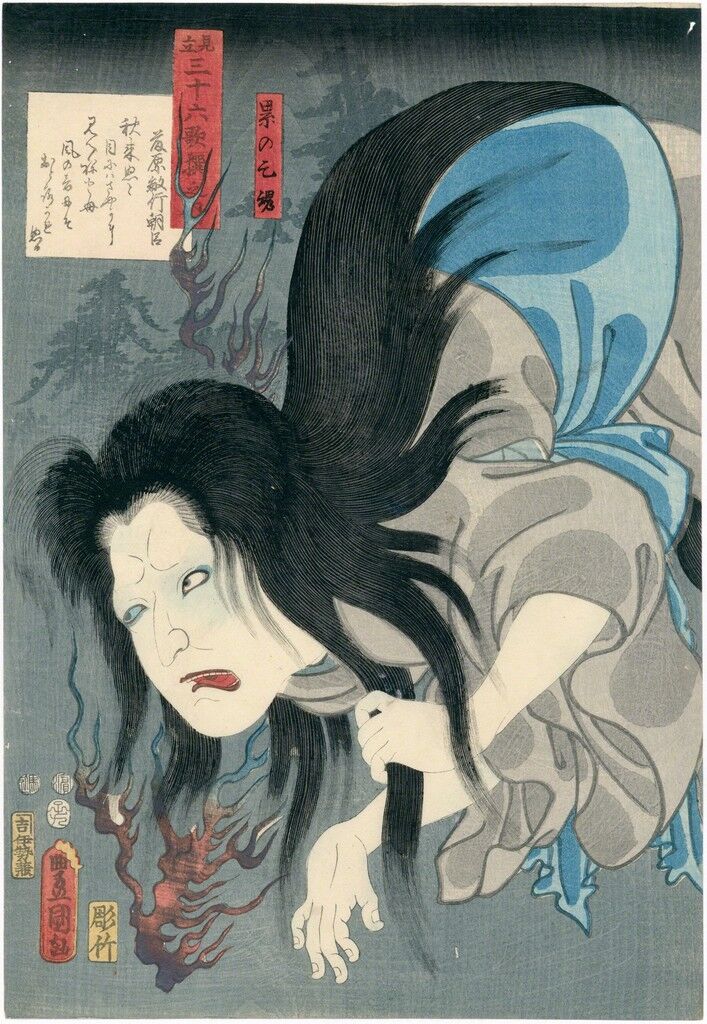 Utagawa Toyokuni III (Utagawa Kunisada)
The Ghost of Kasane, 1852
Egenolf Gallery Japanese Prints & Drawing
While Edo-era artists favored Oiwa as a subject, other yūrei floated through the work of this period, too. The ghost of a young servant, Okiku, emerges in numerous fantastical prints. As the story goes, her oppressive male master throws her angrily into a well—to her death—after she accidentally breaks one of his coveted porcelain plates. She returns to the world as a spirit, doggedly tormenting him until he finally loses his mind.
Hokusai created his interpretation of the narrative from 1831–32; the imaginative work shows Okiku rising from the well, magically metamorphosing from a stack of plates into a long-maned, soaring specter. She almost resembles a shapeshifting snake woman, a recurring type of demon in Japanese folklore. In another rendition from around 1850 by
Toyokuni III
, Okiku’s wispy, ice-blue-and-white form hovers over her murderer, clutching his petrified, cowering body. Her mouth is open, likely a nod to the blood-curdling scream she’s said to have repeatedly emitted. 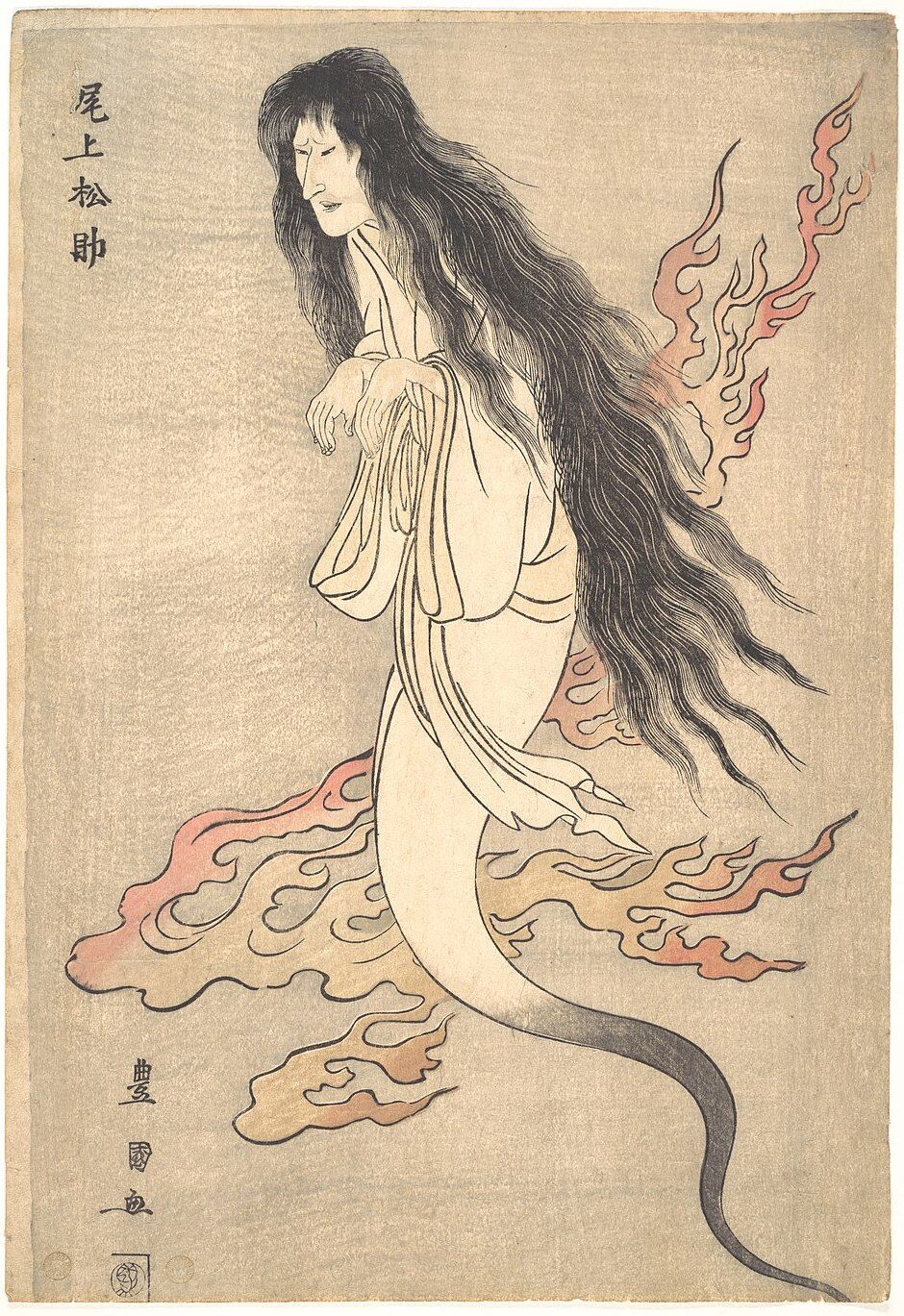 Utagawa Toyokuni, Onoe Matsusuke as the Ghost of the Murdered Wife Oiwa, in “A Tale of Horror from the Yotsuya Station on the Tokaido Road,” 1812. Courtesy of The Metropolitan Museum of Art.

The ghost of Kasane was also a frequent subject in Japanese art. Like Oiwa, Kasane is the victim of her husband, Yagoro, who finds her so ugly that he decides to do away with her via brutal drowning. After he promptly remarries, Kasane returns to haunt and kill Yagoro’s new wife—and his five brides that follow—before tormenting her killer. In an 1852 print by Toyokuni III, Kasane descends from the sky, surrounded by flames, her eyes wide and angry.
The wild-maned, tenacious yūrei richly depicted across ukiyo-e prints have permeated a wide array of Japanese culture in the modern era. Vengeful female ghosts materialize in scores of J-horror films, from Masaki Kobayashi’s creepy Kwaidan (1964) to Hideo Nakata’s truly bone-chilling Ring (1998). In the former, in a segment titled “The Black Hair,” a ghostly wife with long, tangled hair stalks her cheating husband. More recently, writer Christopher Benfey has drawn a convincing comparison between Kobayashi’s depiction of Okiku and Hokusai’s 1831 rendition.
For his part, Davisson sees Oiwa—whom he refers to as a “celebrity spirit, one whose presence still haunts modern-day Japan”—in Ring’s powerful, eerie character of Sadako. In the film, she crawls slowly out of the TV, nails bloody and dark, gnarled hair shielding her face. As she reaches the man she’s out to get, a sliver of her eye is revealed—wide, angry, poised for revenge.
Alexxa Gotthardt
Related Stories