Her take on humor has emerged in installation, furniture, and photography, but it is sculpture where Lucas is in her element. Boobs, cocks, and giant hands moving in a masturbatory wave are all part of her repertoire. Yet alongside these genital jokes, her “Nuds”—stuffed tights twisted into curved lumps on concrete plinths—show she is engaged with a sculptural history far beyond the fried eggs on an old mattress that made her name.
This year Lucas is representing Britain at the Venice Biennale—only the fourth female artist to do so. In 1993, when she and Tracey Emin opened “The Shop”—a six-month outpost in a grungy East London storefront (formerly home to a doctor’s office) that was part studio, clubhouse, and conceptual corner store—it is highly unlikely Lucas or anyone else could see her representing Britain. Nonetheless, she has maintained a steady presence in British art after taking part in the notorious exhibitions “Freeze,” in 1988, and “Sensation” in 1997, both of which solidified the now omnipresent set of
Young British Artists (YBAs)
.
Lucas’s edge and personality shine clearly through the work, which has garnered her recognition (and representation) by some of the biggest galleries in the world—Sadie Coles HQ in London, Gladstone Gallery in New York, Kurimanzutto in Mexico City and CFA Berlin. In 2013, she had a serious retrospective at the Whitechapel Gallery, the east London institution known for launching and canonizing artists’ careers. 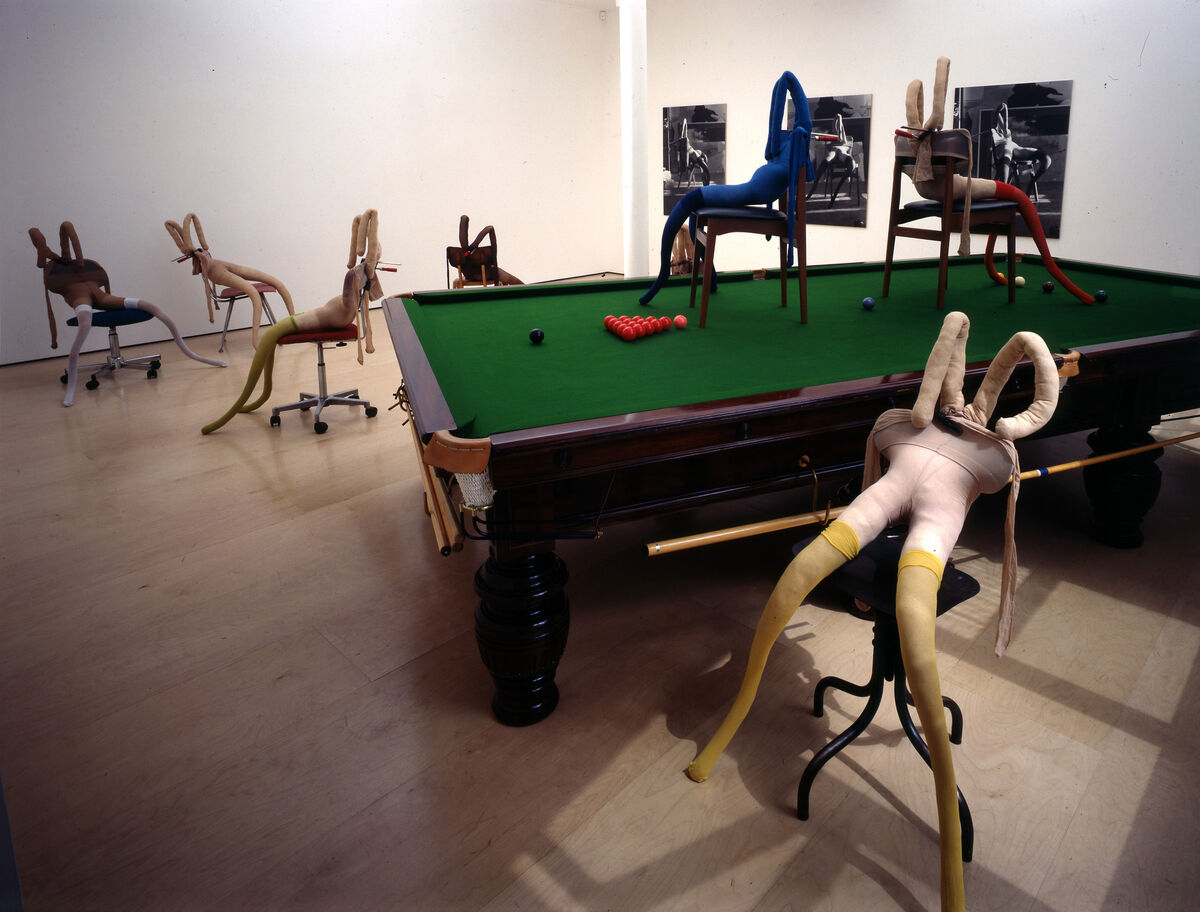 Lucas’s work has always involved everyday readymade objects. Old mattresses and chairs, cigarette butts, and cucumbers come together in suggestive assemblages. She doesn’t in fact have a studio. Instead, she largely works at home or wherever she lands, borrowing or renting spaces, and often making works directly inside the galleries in which they will be presented. If you had to pick one material that the artist owns aesthetically, it would be tights. Beige, fleshy, saggy, or stuffed, Lucas’s bargain nylons morph into manifold sculptural forms throughout her body of work. They are human and abject, fleshy and inanimate.
There is often something sexual in her work. She has made Plaster phalluses, wanking arms, and stuffed breasts, and her first solo exhibition was titled “Penis Nailed to a Board.” Her sculptural body parts are brash and almost pornographic: Two Fried Eggs and a Kebab (1992) presents the ultimate reductive representation of the woman as breasts plus vagina. She does the same with men: a milk bottle cock stands out among her various penis pieces. “That fascination with dicks is a formal one as well.… It can already stand up and do all those things that you’d expect any sculpture to do,” she once explained. Advertisement
Lucas is making new, site-specific work for Venice, though what exactly it will look like is yet to be revealed. (Her recent exhibitions have felt dense—incorporating wallpaper to sculptures to work in progress.) Not surprisingly, the British Council is also staying tight-lipped about Lucas’s installation in their long-standing neo-classical pavilion. “Sarah has free reign of the pavilion and what exactly this results in will only become clear on May 6th,” the Council’s director of visual arts, Emma Dexter, notes. “Sarah tends to consider how setting and subject interact, so I am sure she will reference what is one of the most beautiful and historic pavilions in the Giardini. We can expect that Sarah will bring to the work her characteristic wit, irreverence and sense of irony.”
Whatever the results, there is bound to be a sense of the provocative, which should be a lively contrast to the increased conceptual dryness in a lot of contemporary work. As fellow YBA artist Damien Hirst, who’s rumored to be Lucas’s biggest collector, has noted: “She makes work like Picasso, putting everyday things together in unexpected and powerful ways…She’s the greatest artist I know.”
Francesca Gavin
British Pavilion, May 9–Nov 22, Giardini
Explore the 56th Venice Biennale on Artsy.
Related Stories