At the Venice Biennale, Artists Create Their Own Truths in the Era of “Fake News”

All art is fake news: imaginative, subjective, and constructed. If artists use the real world as raw material, their creations are only inventive interpretations of experience. That’s a good thing, particularly if we’re looking for new perspectives or novel ways to consider the increasingly confusing information surrounding us. As curator Ralph Rugoff noted at Wednesday’s press preview for the 58th edition of the International Art Exhibition of La Biennale di Venezia, we’re living in a world of polarized discourse and opposing parties that refer to different facts.
Rugoff titled his show (which extends across two venues: the Arsenale and the Giardini) “May You Live in Interesting Times” after a proverb of apocryphal origins. Warning against the rise of fascism in the late 1930s, British politician Sir Austen Chamberlain invoked the phrase, calling it a Chinese curse. Turns out, the Chinese never used it. In Rugoff’s show, the most exciting works revel in their own fictions—and ultimately expose contemporary truths. 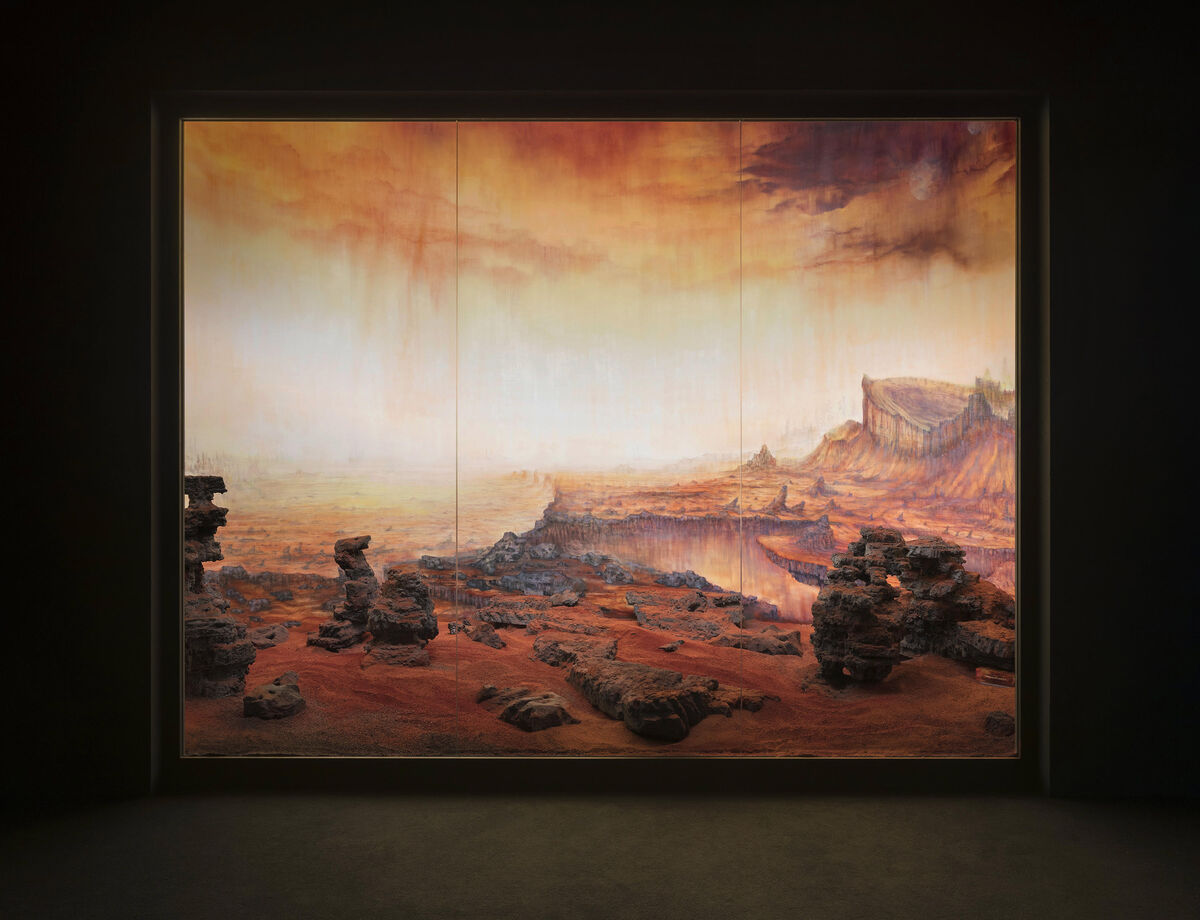 Kahlil Joseph
’s contribution, BLKNWS (2018–present), most explicitly considers the media. Across two screens, the artist plays his own version of a newscast aimed at the black community. It features social-media snippets, talking heads, and banners that tell major and minor stories of contemporary life. I listened to a segment on Lil Miquela, the CGI character with a massive Instagram following. Curator Helen Molesworth and actress Amandla Stenberg serve as news anchors. If the pair aren’t exactly known as hard-hitting reporters, they’re much more fun to watch.
It’s not just the news networks that are subject to manipulation these days, but our photojournalism, too.
Rosemarie Trockel
’s grid of 22 digitally altered photographs appear, at first, to be among the show’s tamer works: austere, black-and-white, and very German. Look closer, though, and you’ll see a news photograph of a seahorse carrying a cotton swab; a long rod wrapped with massive chains emerging from a limousine window; and a man in a white button-down with a mask over his mouth and stains on his chest. Mystery, wry humor, and the uncanny pervade the series. Advertisement
Rugoff argues that even the more formal works can embrace artifice.
Carol Bove
’s masterful sculptures are simple monochromatic shapes. Bather (2019) looks like a massive, light-pink twist of tubing. Yet each crease and bend in the material creates a dramatic interplay of light and shadow on the intricate surface. The fun, bubblegum hue belies the significant heft of the stainless steel beneath the paint. Bove’s title situates the work within a long tradition of Western art history, likening the structure to a monumental nude body. With a subtle but ingenious feminist touch, Bove reclaims the male gaze for her own abstract practice. If Bove’s work nudges at issues of gender, three photographers use their medium to generate entirely new selves. The idea of the doppelgänger, or a double, is particularly strong throughout these works.
At the Arsenale,
Martine Gutierrez
shows her “Body En Thrall” series, which presents her in a variety of poses that riff on fashion photo shoots. She emerges from a pool at a man’s feet, wears a bikini with melons filling her bra cups, and serves water by a poolside populated with mannequins. In her colorful “Demons” series at the Giardini, Gutierrez depicts herself as tzitzimimes, or Aztec deities. The artist styles herself under bold flowers, beadings, elaborate headpieces, and ornate jewelry. With a maximalist palette, she celebrates the queer, indigenous body and her own capacity for endless self-invention. 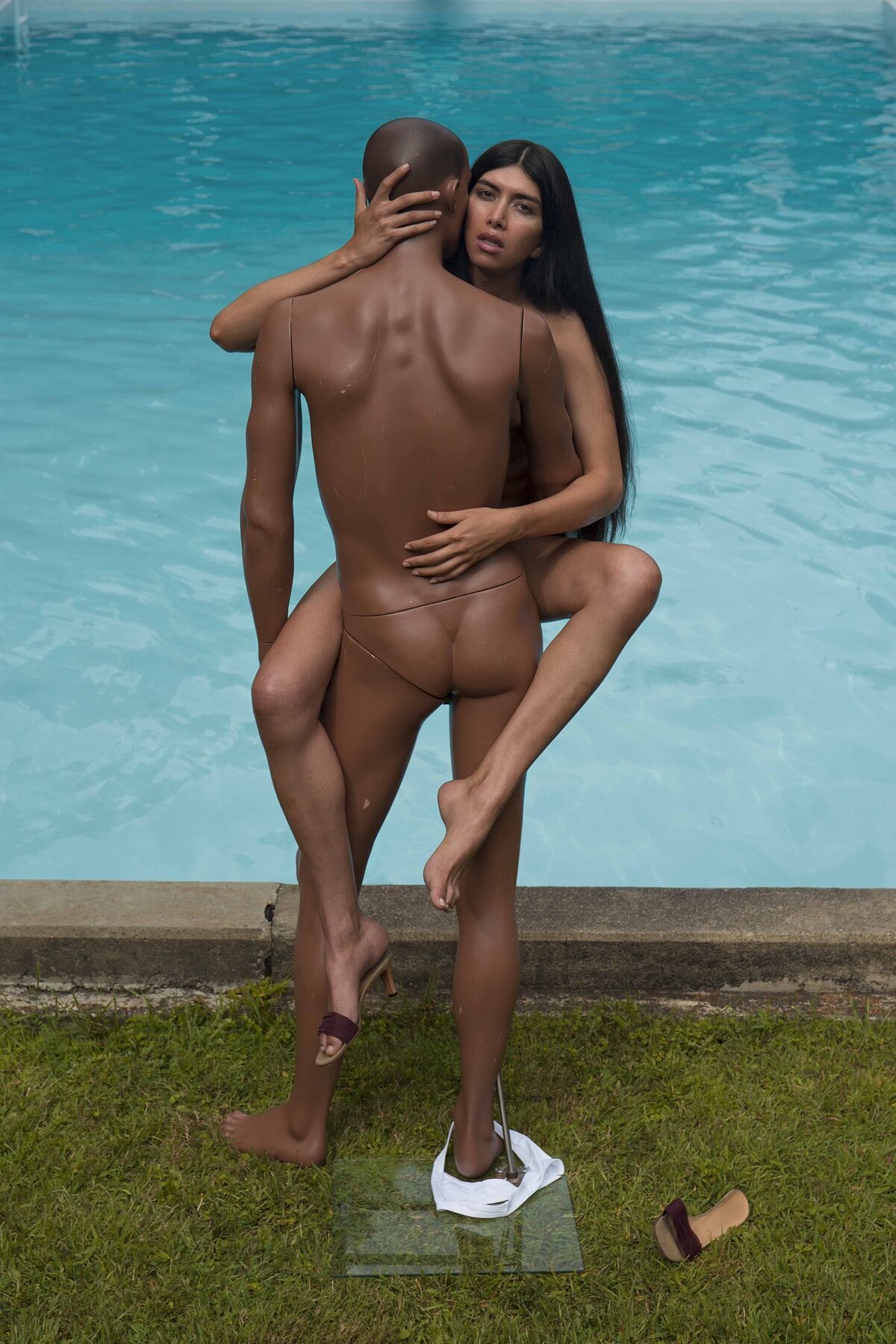 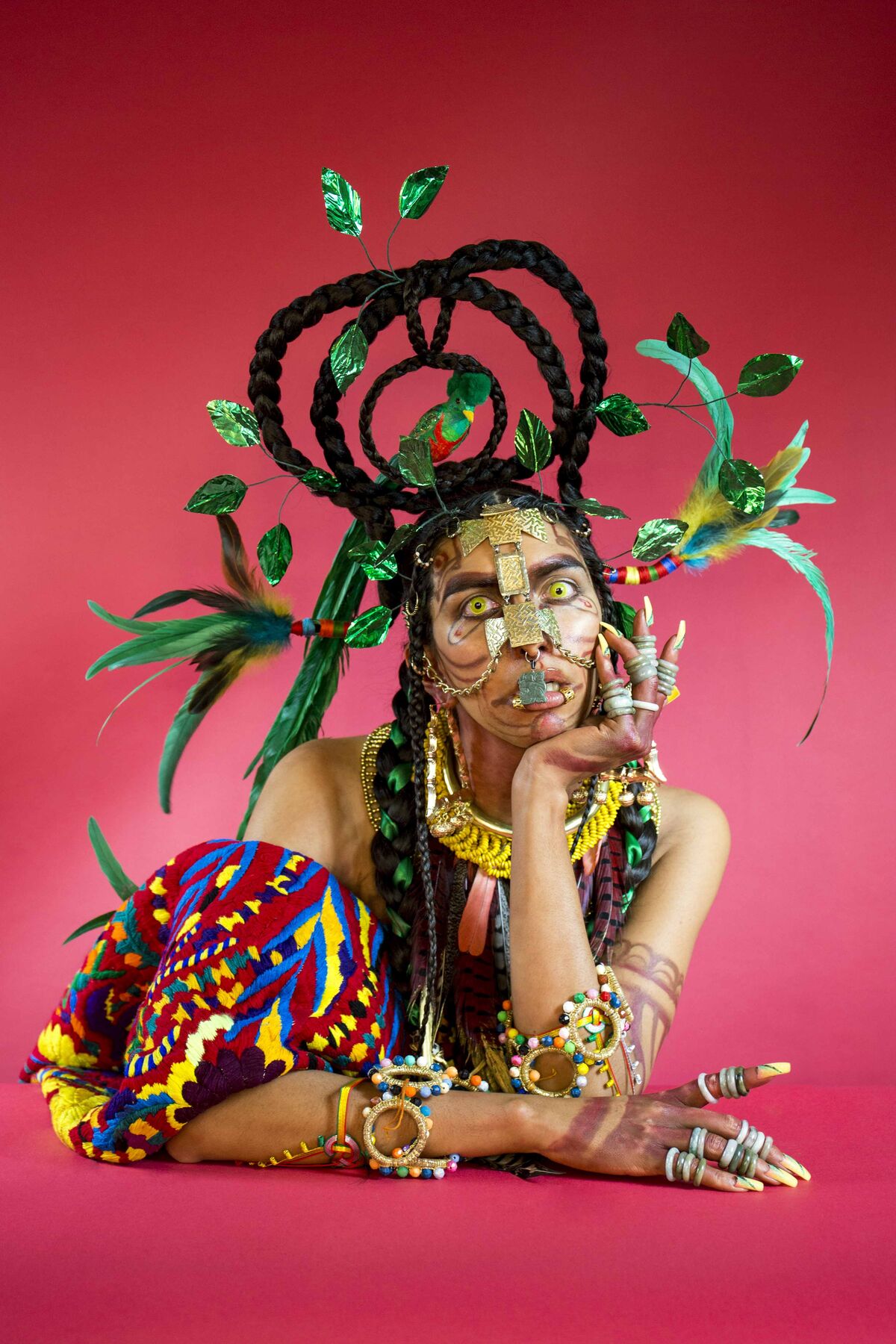 Zanele Muholi
adopts a similar conceptual strategy, with an opposite aesthetic. She, too, takes myriad self-portraits in varying garb. Yet her black-and-white pictures favor stoicism over Gutierrez’s fun.
Mari Katayama
photographs herself surrounded by glittering clothing and her prosthetic limbs. Her three brightly painted legs recall
Frida Kahlo
’s gorgeously decorated corsets. Born with a congenital disorder, Katayama had to amputate her legs at nine years old. What others might assume is a setback or lack, Katayama turns into an opulent fairy tale. In one picture, she drapes herself with a shawl of beaded limbs as she sits on a floral patterned sofa. Staring with determination to the side of the frame, she exudes confidence and glamour. She’s clearly the author of her own story.
Many of the photographers in the show are more interested in fabulation than in their medium’s original, documentarian intents. In his 2017 series “Blackout,”
Stan Douglas
created an entire narrative about a New York City blackout that never actually happened. Solitaire (2017) is an overhead shot of a woman playing the eponymous card game in an elevator; Queue (2017) features a line of looters exiting a shop through a broken glass door. While Douglas’s blackout may be fake, the work approximates the realities of American urban living—namely, its simultaneous sense of isolation and camaraderie, and its tendency toward chaos and crime when public systems fail. Douglas has also created a new film, Doppelgänger (2019), which imagines a woman named Alice who submerges in a cold bath, doubles herself, and teleports one self onto an outer space mission.
3 Images
View Slideshow Unlike Muholi, Katayama, Gutierrez, and Douglas’s character, not all artists want to double themselves.
Danh Vo
has painted over a series of mirrors throughout his installations in both the Arsenale and the Giardini, prohibiting self-reflections. A compelling, darkened room in the Giardini features these “paintings” alongside
Yu Ji
’s severed limb sculptures, made from cement.
Cyprien Gaillard
’s digital animation L’Ange du foyer (Vierte Fassung) (2019) plays in the center of the room. Sans screen, an angel-like figure merely projects into the shadow. Altogether, the artworks thematize presence and absence, materiality and immateriality, and what it means to have a “real” body or self. This room exemplifies one of Rugoff’s major strengths: making surprising connections between disparate artists, to moving effect.
3 Images
View Slideshow 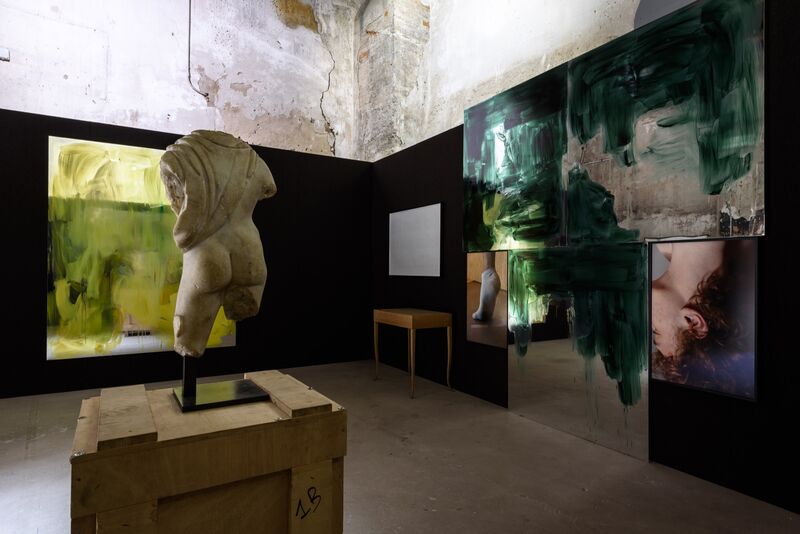 If these are all sophisticated ways for artists to dissimulate,
Andreas Lolis
takes an approach as old as ancient Greece. His
trompe l’oeil
sculptures resemble three trash bags, half a pizza box, and broken canvases. Lying just outside the entrance to the Giardini, they offer a cheeky beginning to the start of the show. It’s easy to overlook them: Their falseness asks us to consider the real difference between art and trash.
A full branch of Rugoff’s exhibition could be titled “Things That Look Like Other Things.” At the press preview, he noted a specific interest in work that falls “between our usual categories.”
Michael Armitage
’s paintings look like typical canvases, but are actually made on tree bark (Rugoff, helpfully, has mounted them on wood). While the artist takes inspiration from photojournalists covering the Kenyan election, his works are steeped in strangeness. They’re infused with ghostly outlined figures, a
Fauvist
palette, and human limbs that blend into the natural world: depictions of real conflict that merge into abstraction. Installation view of Andrea Lolis, Untitled, 2018, at the 58th International Art Exhibition of La Biennale di Venezia, “May You Live In Interesting Times,” 2019. © Andrea Lolis. Courtesy of The Breeder, Athens. 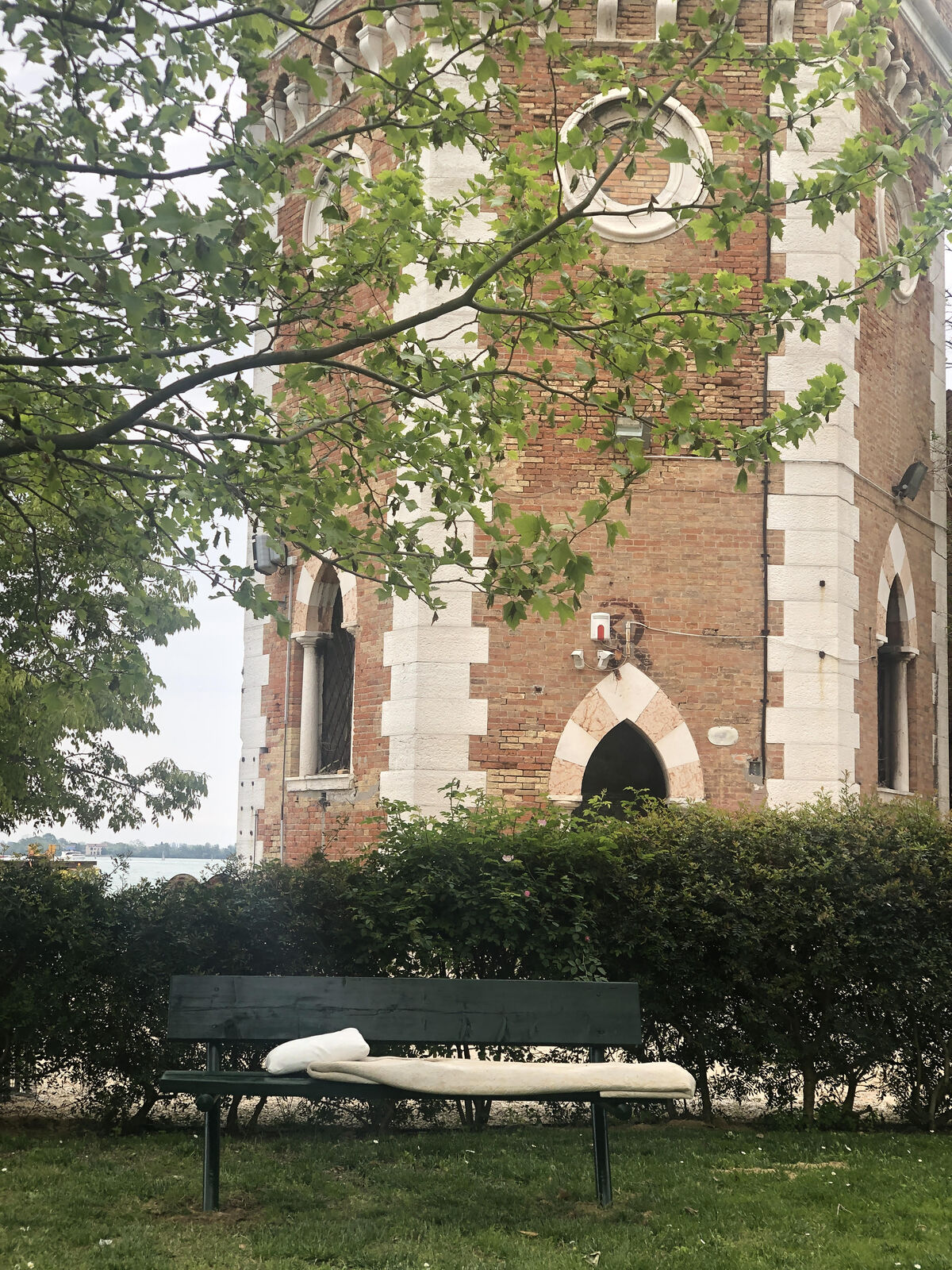 Installation view of Andrea Lolis, Untitled, 2018, at the 58th International Art Exhibition of La Biennale di Venezia, “May You Live In Interesting Times,” 2019. © Andrea Lolis. Courtesy of The Breeder, Athens.

Christine and Margaret Wertheim make intricately crafted faux–coral reefs from materials as diverse as beads, plastic bags, yarn, thread, magnets, sand, and biscuit tins.
Dominique Gonzales-Foerster
and
Joi Bittle
’s Cosmorama (2018) might be called an art installation, but it looks more like a diorama one would find at a natural history museum. The piece consists of a painted backdrop and a red-sand-and-rock ground intended to resemble Mars’s landscape—our future home, perhaps, given the very real threat of climate change.
Anicka Yi
’s colonies of bacteria and algae look—when encased in rectangular vitrines and hung from the ceiling with wire—like abstract paintings.
Zhanna Kadyrova
’s installation Market (2017–present) reveals itself to peddle only fake, mosaiced fruit (not for sale!).
2 Images
View Slideshow Liu Wei
’s lovely Microworld (2018) at the Arsenale features larger-than-life shapes. Silver spheres and curves, a pink ball, and a smooth turquoise plinth are situated behind glass, beneath a glowing white ceiling. It’s less sculptural than atmospheric, more photogenic than experiential: Take a picture, and the result will look like an abstract painting filled with light and shadow. At the Giardini, his Devourment (2019) is again composed of rounded sculptural elements—a teal mat, a silver globe, a curving wire—yet the piece is roped off. Liu restricts the audience’s perspective, prohibiting us from walking around the objects. In an art museum, artists have so little influence over how others view their work. Depending on your perspective, the artist offers either guidance or control.
Finally, two of the most spectacular pieces in the show look banal at first, but turn downright violent. At the Giardini,
Sun Yuan & Peng Yu
present a giant paintbrush that thrashes around a glass cage, splattering blood-hued paint on the walls, floor, and ceiling. At the Arsenale, they exhibit Dear (2015): a white silicon chair made to resemble Abraham Lincoln’s imperial Roman seat in his Washington, D.C., memorial. A black rubber hose uncoils from its center, noisily lashing out at intervals against the scratched-up glass barrier that contains it.
4 Images
View Slideshow 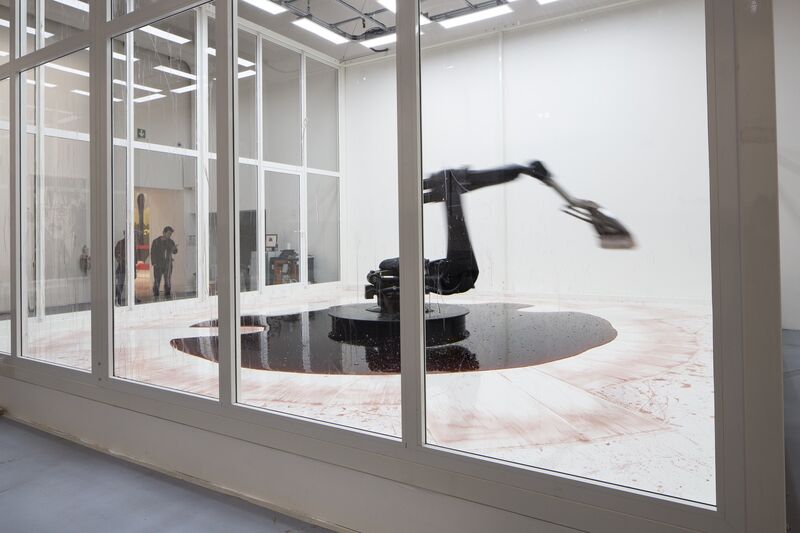 Rugoff only hints at how to interpret his exhibition and think about his overarching themes. At the press conference, he offered what he called “leitmotifs”—walls, doppelgängers, masks, mirror worlds, hidden identities, and science and technology. It was more important to choose good art and artists than to curate with didactic intent. He sought a plurality of voices, each with its own plurality. The “facts” of contemporary life seem far less important to Rugoff than do individual artists’ perspectives. It’s for the best—no news is good news, after all.
Alina Cohen
Related Stories