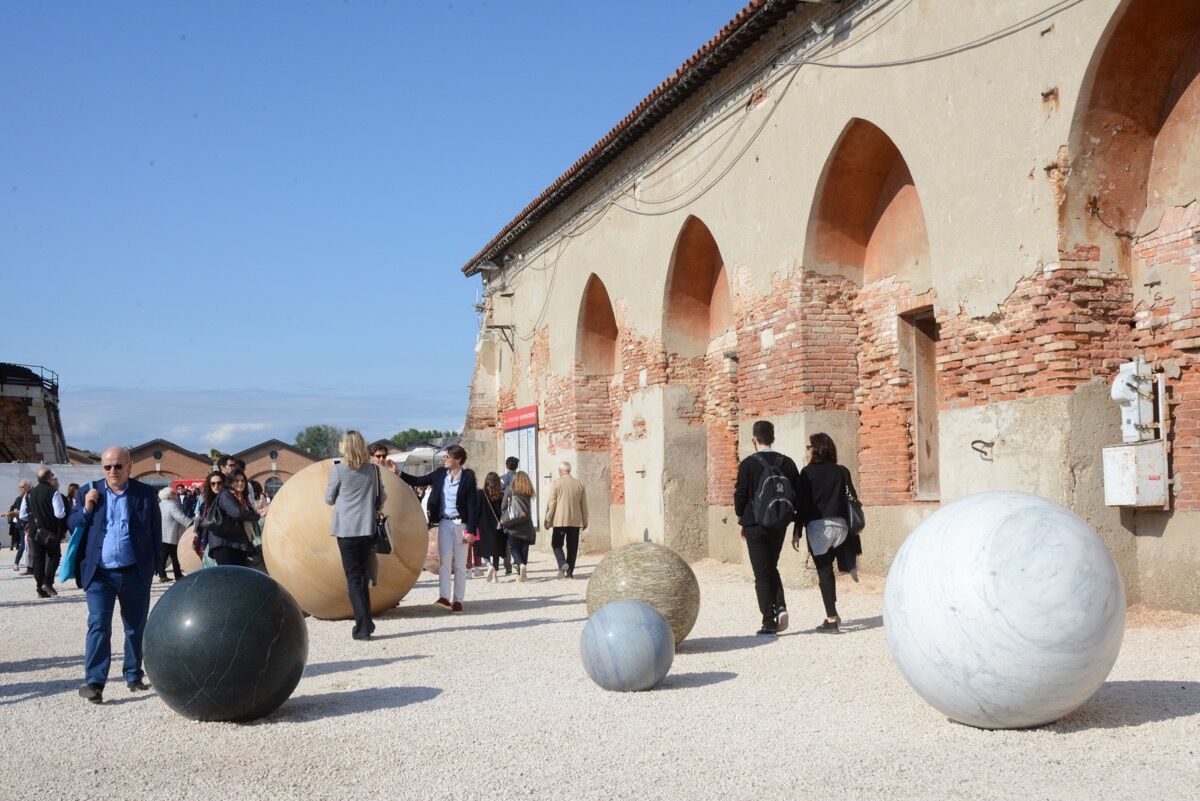 Installation view of work by Alicja Kwade in “Viva Arte Viva” at the 57th Venice Biennale, 2017. Photo by Casey Kelbaugh for Artsy.

If you begin at the beginning of the 2017 Venice Biennale exhibition, “Viva Arte Viva,” you might think this is a show primarily about artists’ sleeping habits.
The vast exhibition, assembled by the Centre Pompidou’s chief curator Christine Macel, brings together 120 artists and collectives—70 percent of whom are making their Biennale debut—and opens in the Giardini’s Central Pavilion with a series of self-portraits of an artist idly passing time in bed.
The photos are by Croatian artist
Mladen Stilinovi
c. They hang a room over from a chaise longue created by the late
Franz West
, which is accompanied by a stream-of-consciousness prose piece by the Austrian artist, titled Otium (1995), the Latin for which means leisure time or meditation. Nearby,
Frances Stark
also pictures herself lying on a sofa in her studio, ruminating on the array of influences and references that surround her. The implication? Idle time begets creativity.
This interest in the spaces where artists do nothing but gestate and ideate extends to American artist
Dawn Kasper
’s piece, for which she’s transplanted her whole studio into the pavilion, complete with a drum kit, work tables piled with art and scraps, and the artist herself, milling around, chatting to people, and fiddling with her work from time to time. 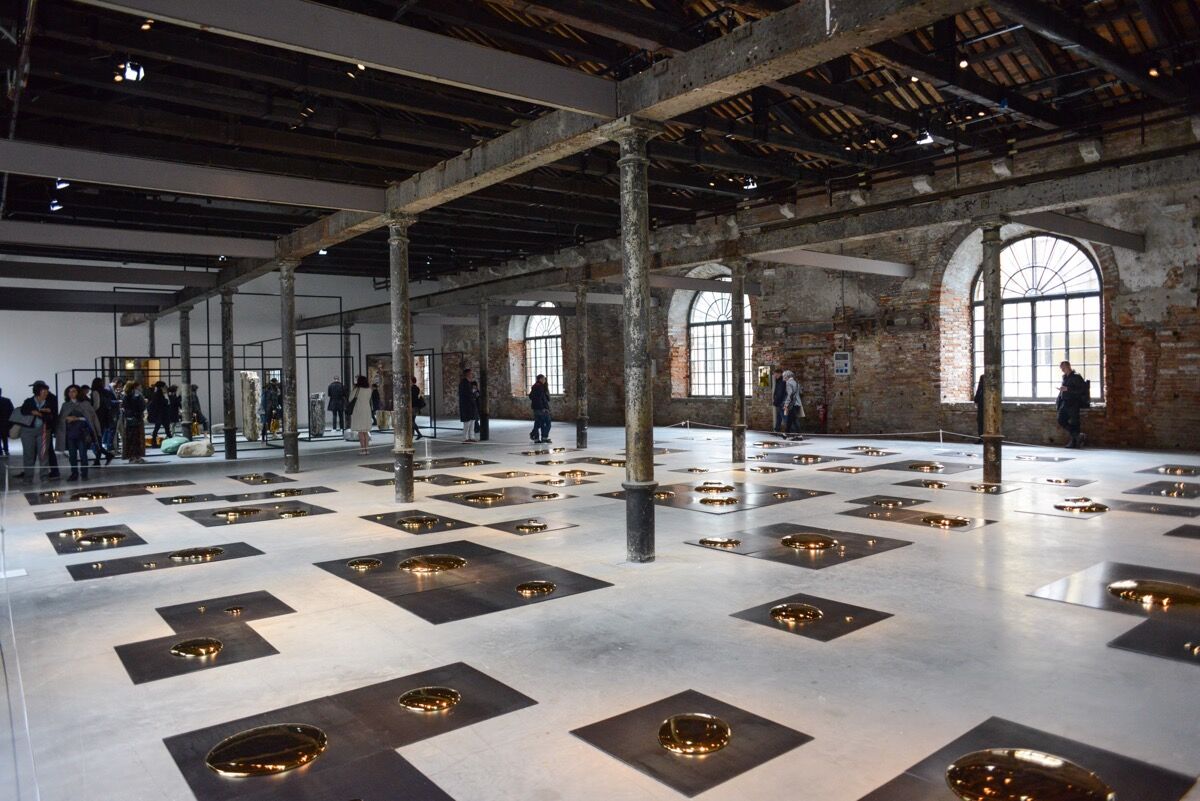 In these opening rooms, the rather vague claims of Macel’s Venice Biennale to being about artists, for artists, begin to take (very literal) form. This loose premise is a jumping-off point to reflect on the nature of creativity and to make an argument for the value of the artist, even the value of inefficiency, as one wall text alludes to, as a vital origin point for new ideas.
Artists are the central protagonists in the overarching picture that Macel gives of human experience, which she has broken down across the Giardini’s Central Pavilion and the Arsenale into several themes: the Pavilion of Artists and Books, the Pavilion of Joys and Fears, the Pavilion of the Common, the Pavilion of Earth, the Pavilion of Traditions, the Pavilion of Shamans, the Dionysian Pavilion, the Pavilion of Colors, and the Pavilion of Time and Infinity.
If these are the components of our world, or rather, those that Macel sees as central concerns of artists, it’s a tentatively optimistic picture that she presents. It amounts to a prescription for a cure, perhaps, to humanity’s current ills. And, in this way, it finds itself in near polar opposition to the approach of Okwui Enwezor’s “All the World’s Futures” two years ago, an urgent and politically loaded excavation of colonial history that unflinchingly, and sometimes unrelentingly, revealed the truth about our fraught global order. (It’s worth noting, too, that whereas Enwezor foregrounded artists of the African Diaspora, Macel’s roster of artists is predominantly white.) 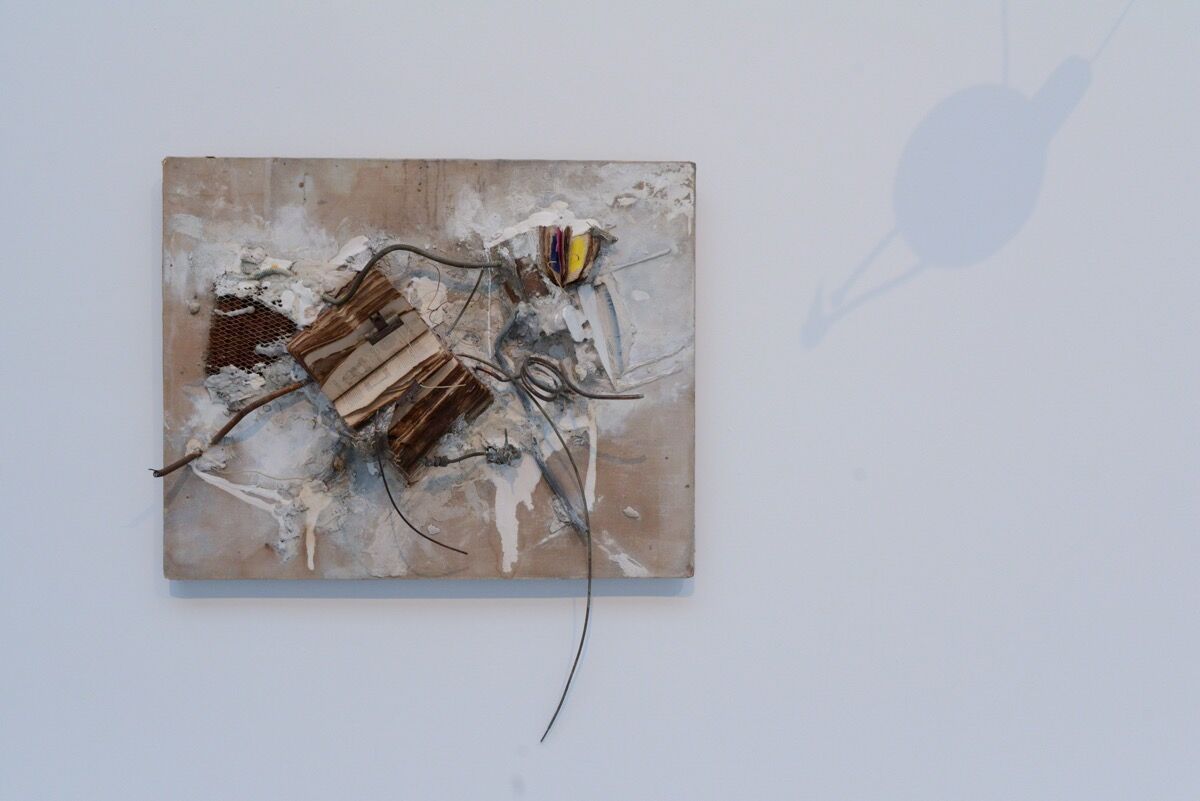 Installation view of work by John Latham in “Viva Arte Viva” at the 57th Venice Biennale, 2017. Photo by Casey Kelbaugh for Artsy.

Advertisement
As portrayals of the human project, the first two pavilions, of Artists and Books and of Joys and Fears, both housed in the Giardini’s Central Pavilion, are outstanding.
The emphasis of the first section is perhaps best summarized by the little-known post-war artist
John Latham
’s room full of paintings and sculptures glutted with parts of, or whole, books; as part of his practice, Latham also burned books in order to imbue himself with “gray matter,” as the wall text notes. By invoking artists’ sensitivity to the world and their ability to absorb and process it through materials, Macel primes her audience for what’s to come.
The rooms that make up the Pavilion of Joys and Fears are a pointed and moving exploration of human emotion. Among the strongest works in the section are Canadian artist Hajra Waheed’s series of postcard-sized paintings that distil into tiny frames the dreams and uncertainties of migrants, faced with long journeys into the unknown. Czech artist
Luboš Plný
’s anatomical renderings of the human body, overlaid with narrative details of his life, capture the wonder and complexity of our species in its physical and psychological depth. And American artist
Rachel Rose
’s absorbing, melancholic animated film follows a hybrid dog-rabbit on a journey into the wild. It’s strange and touching, with fluid cuts and a beautifully imagined visual world that suggests the influence of Japanese director Hayao Miyazaki. 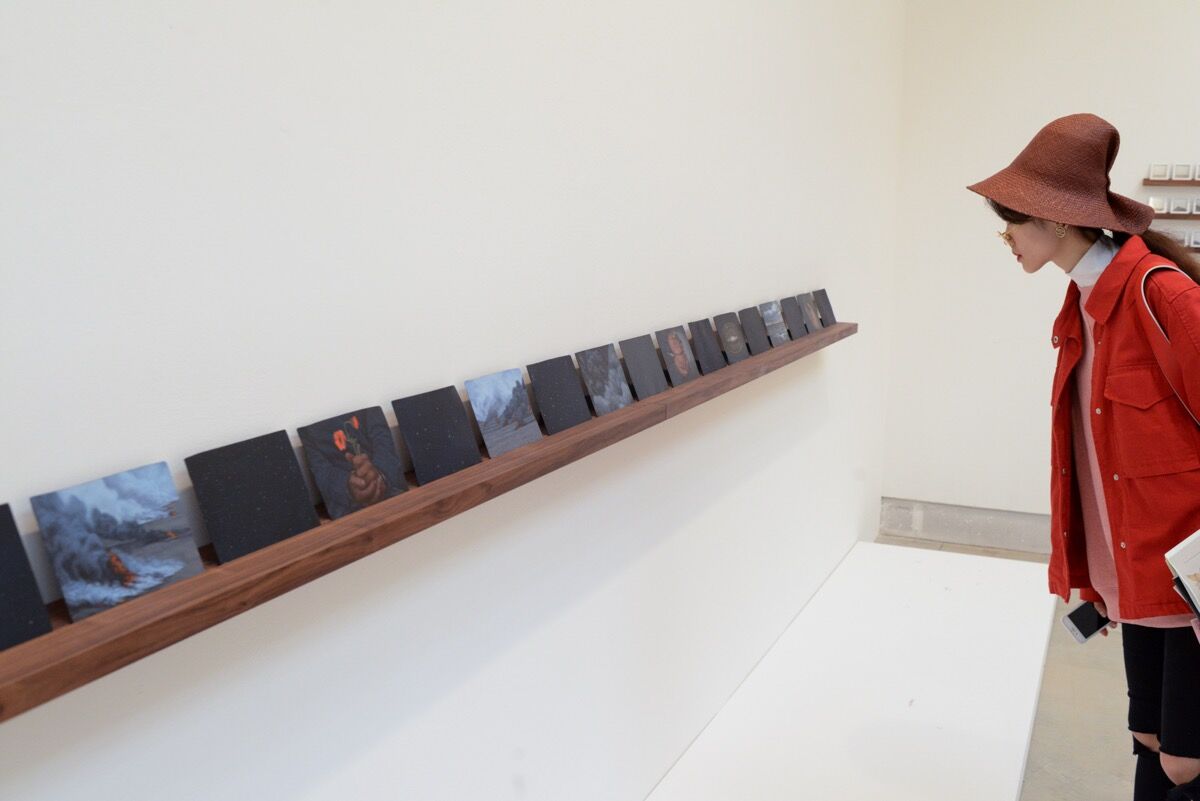 Installation view of work by Hajra Waheed in “Viva Arte Viva” at the 57th Venice Biennale, 2017. Photo by Casey Kelbaugh for Artsy.

In this section of Macel’s exhibition, each artist captures a nuanced texture of human experience—and they cohere tightly together. At the Arsenale, however, the exhibition loses its way.
The long, dark runway of the former armory and shipyard is a much harder space to fill cohesively than the more petite Central Pavilion. Breaking this larger chunk of the exhibition down into accessible chapters is, in theory, not a bad thing. But, in execution, Macel’s pseudo-pavilions start to feel, at times, too simplistic, at others, like an arbitrary device.
The Pavilion of the Common presents artists’ inquiries into collective action, such as American artist
Anna Halprin
’s Planetary Dance, for which she and her husband organized a ritualistic dance to reclaim Mount Tamalpais in San Francisco, following the murder of six women on the trails there. (The day-long ritual has since evolved into an annual event with other locations springing up around the globe.) A video and images show the dancers positioned in a circle on the mountain, calling for peace while a drumbeat thumps. 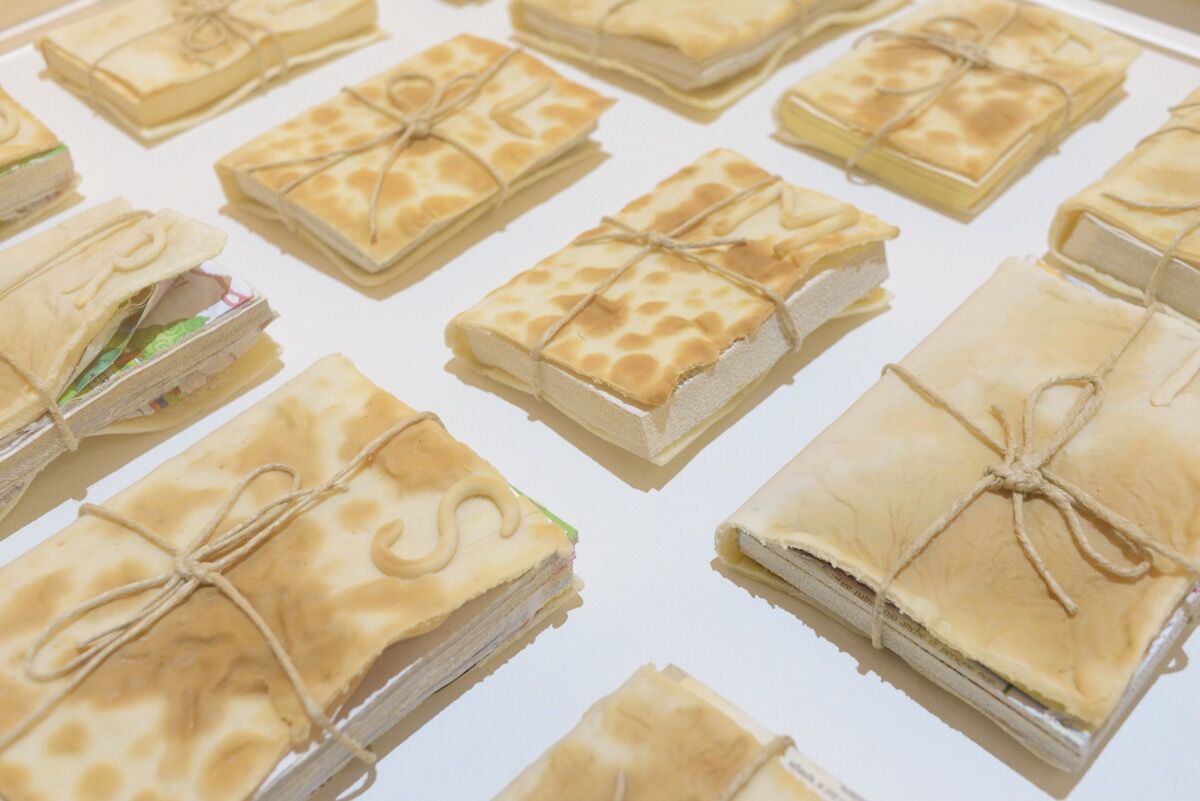 Installation view of work by Maria Lai in “Viva Arte Viva” at the 57th Venice Biennale, 2017. Photo by Casey Kelbaugh for Artsy.

Elsewhere in this section, thread and woven fabric are used repeatedly as a metaphor for the individuals that compose a community—most successfully in the beautiful threaded compositions and performances of Italian artist
Maria Lai
. But the metaphor ultimately becomes tired and overwrought due to the sheer number of pieces in which it is employed.
The other “pavilions” at the Arsenale are a similarly mixed bag. The Pavilion of Earth excels with works like Kosovar artist
Petrit Halilaj
’s fabulous fabric moths, or
Charles Atlas
’s fusion of the drag queen Lady Bunny’s monologue about the corruption of American politics with a series of neon sunsets that form a mosaic on a vast screen. The atmospheric effect of the sinking sun lends weight to Bunny’s words and evokes the connection between our periled planet and the transgressions of those in power. 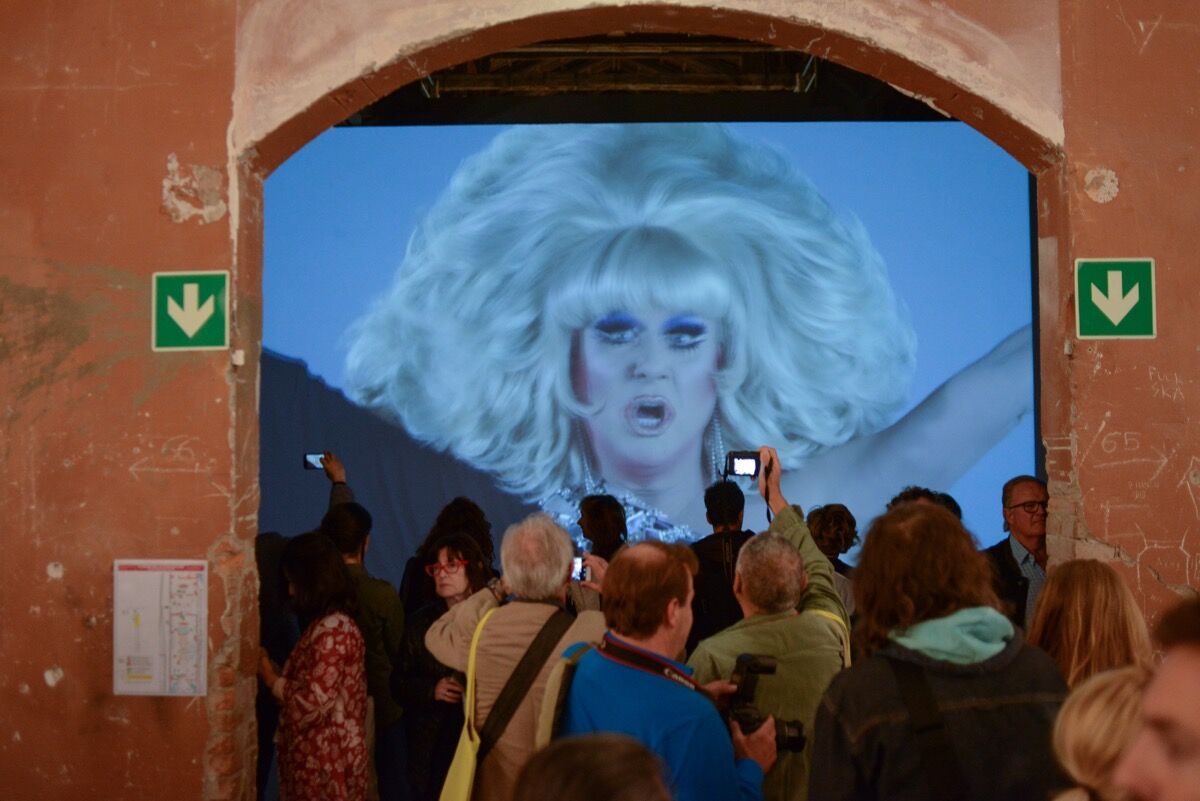 Installation view of work by Charles Atlas in “Viva Arte Viva” at the 57th Venice Biennale, 2017. Photo by Casey Kelbaugh for Artsy.

But the section falls flat with Japanese artist
Shimabuku
’s clunky one-liner, in which he transforms contemporary technology into caveman tools—a Macbook, attached to a wooden handle, becomes an axe.
The work nonetheless leads into the following two sections, the Pavilions of Traditions and of Shamans, which accurately point to an increasing sense of doubt across some quarters of the Western world as to whether the promise of modernity and the progress of Enlightenment have resulted in a step forward for humankind. In turn, artists and the wider public are, in growing numbers, developing an interest in spirituality, pre-modern cultures, the occult, and the metaphysical realm.
In this light, works like that of Italian artist Michele Ciacciofera, with her gorgeous set of objects perched on tables and hung along the wall—a honeycomb doused in glitter, ceramic forms, textiles, and drawings, intended to invoke the funerary items dug into rocks in Neolithic Sardinia—feels particularly of our moment. So too does Russian artist
Irina Korina
’s wacky shrine to fallen Russian soldiers, which riffs on the country’s cult around the armed services and takes the shape of a chapel-like structure walled with neon lights and decorated with giant hanging vagina forms composed of kitschy artificial flowers. 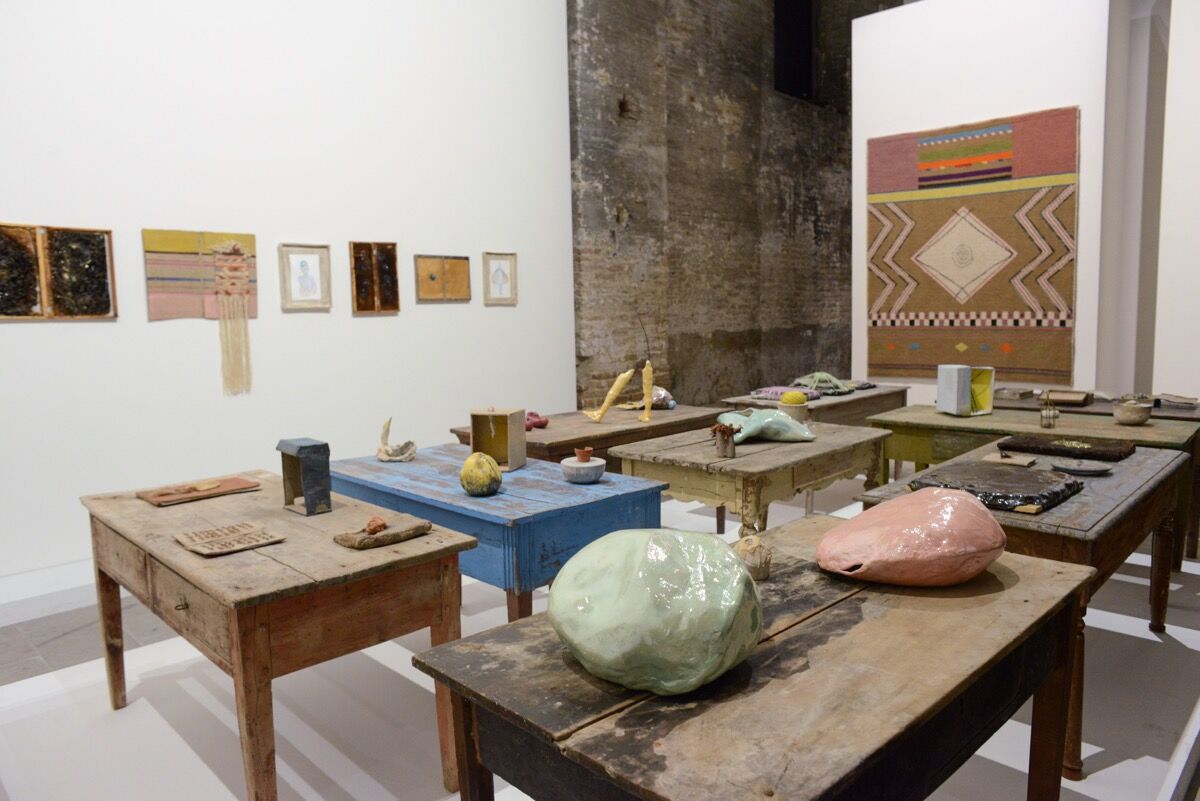 Installation view of work by Michele Ciacciofera in “Viva Arte Viva” at the 57th Venice Biennale, 2017. Photo by Casey Kelbaugh for Artsy.

The exhibition’s final three sections—the Dionysian Pavilion, devoted to women artists and artists addressing women and female sexuality, and the Pavilions of Color and of Time and Infinity—are far too broad and nebulous to be helpful frames for any of the (often great) works therein.
The Pavilion of Color, for instance, is described in a the wall text as the biennale’s penultimate “fireworks” display. One wonders how an artist like
Judith Scott
, with her complex and layered bound objects, ended up in this reductive category. Moreover, the installation of her work adjacent to
Sheila Hicks
, another artist working with textiles, does a disservice to both artists, who share certain basic properties but otherwise have nothing to do with each other.
And time—could there be a more expansive topic for a handful of divergent installations to address? This final chapter of Macel’s odyssey greets visitors with
Liliana Porter
’s El Hombre con el hacha y otras situaciones breves (2013), a zoomed-out, macro view of a smashed-up world composed of shattered ceramics, a broken table, and miniature figures. 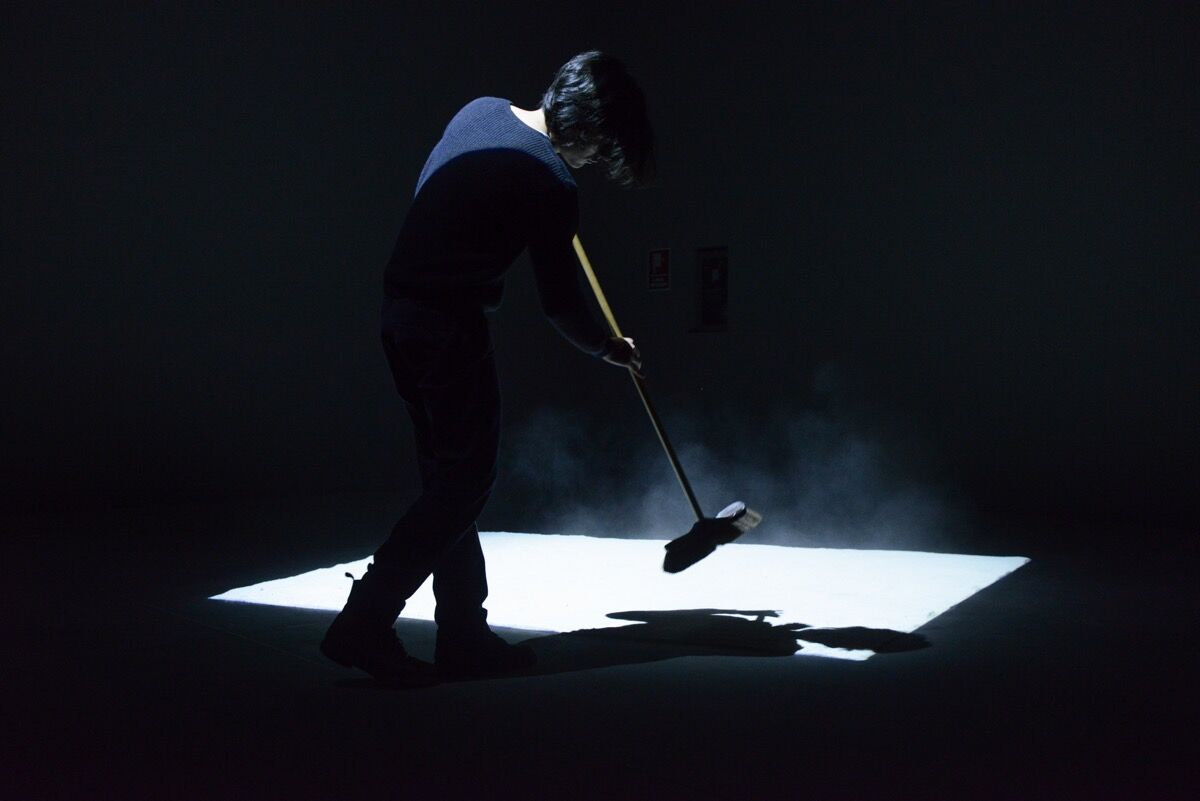 Installation view of work by Edith Dekyndt in “Viva Arte Viva” at the 57th Venice Biennale, 2017. Photo by Casey Kelbaugh for Artsy.

It’s like a microcosmic apocalypse seen from outer space—except strangely staid and palatable. Seen at this scale, the human condition doesn’t feel quite so insurmountable. Porter’s work is installed across from Edith Dekyndt’s poetic piece, One Thousand and One Nights (2016), in which a performer is engaged in the slow, endless task of sweeping a carpet of dust into a spotlit square on the ground. It reads as a meditative, melancholic expression of human toil.
Despite the strength of these works and others within this pavilion, they strain to meet the lofty terms set by it having been titled Time and Infinity. And so it is that an exhibition that starts with a bang ends with a fizzle.
Macel and her team took considerable risks with this exhibition, by framing it in a way that was ambitious but with little by way of curatorial ego—and its optimism and empathy for the artist are a welcome invitation to see the world anew. Across the show, there are relatively few banner-name, crowd-pleasing artists, and happily so. In exchange, Marcel marshalled an enormous number of little-known artists into a survey with much excellent art.
In the end, despite Macel suggesting that this exhibition is intended to operate a few steps removed from our current, charged political landscape, her conceit is ultimately a political one. It is the radical proposition that humans should be defined not by arbitrary national borders but by shared experiences. 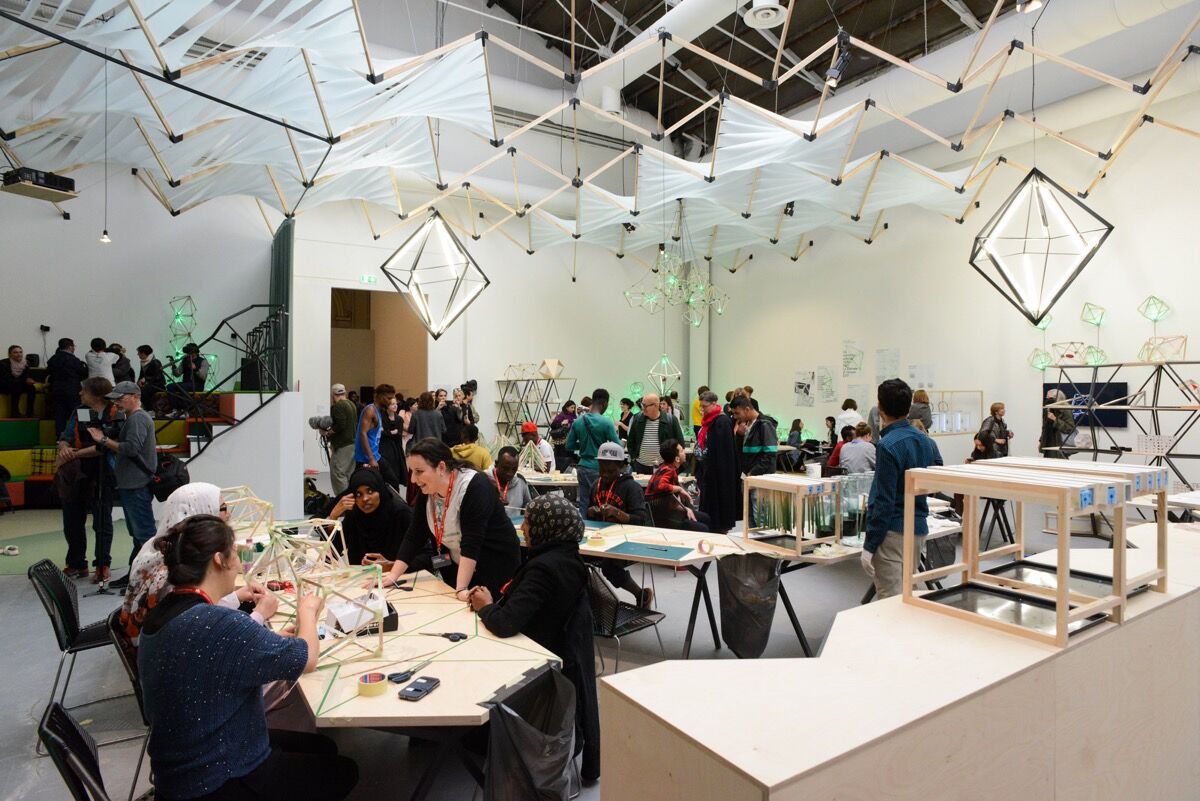 Installation view of work by Olafur Eliasson in “Viva Arte Viva” at the 57th Venice Biennale, 2017. Photo by Casey Kelbaugh for Artsy.

And with that, Macel posits that artists not only give us vision, but also provide solutions. Exit Enwezor’s searing portrait of our political order and enter Macel’s celebration of collectivity and relatively upbeat, forward-looking approach to addressing the current migration crisis—in, for example,
Olafur Eliasson
’s Green Light project in the Central Pavilion, for which refugees, migrants, and members of the public are invited to join a community workshop where they assemble rudimentary materials to form lanterns that are sold to benefit NGOs.
“Viva Arte Viva” is something of a manifesto for artistic creativity, “a cry of passion for the artist,” as Macel has said. Much of it is a lot less woolly than that sounds. Sometimes, though, it’s every bit as woolly as that sounds.
Tess Thackara
Related Stories