Julie Baumgardner
Jun 2, 2015 10:22am
The 56th Venice Biennale is the most political edition of the prestigious art event in years. At the core of its lead show, “All the World’s Futures,” curator Okwui Enwezor asks this ambitious question: “How can the current disquiet of our time be properly grasped, made comprehensible, examined, and articulated?” So how is it that in the exhibition’s first month, perhaps the most political project in any of the pavilions—
Christoph Büchel
’s “THE MOSQUE” for the Icelandic Pavilion—has come under threat of being shut down, has been shut down, and is now rumored to be reopening?
That circuitous standoff sums up the health of the pavilion. It has been under siege ever since the Swiss-born, Iceland-based artist proposed his project, which as an artwork most closely aligns with social practice. By now, even those who don’t follow the inner workings of the art world are likely aware that “THE MOSQUE” isn’t sitting right with the municipal government of Venice, the Biennale, and the local community—Venetian city officials maintain, in a statement issued by the Icelandic Art Center (IAC), “that the Mosque is not an art exhibition but a place of worship and that the IAC should consequently apply for a permission to open a place of worship.” It is also curious that neither Enwezor nor Biennale director Paolo Baratta have commented on the controversy.
“THE MOSQUE” sits inside Santa Maria della Misericordia, a defunct 14th-century church that ceased religious operations in 1969. The building has since been a rentable venue, of “type SU,” as it is listed within the zoning regulations of the old city of Venice, regulations that permit spaces to be used as “Museums; exhibition venues; libraries; archives; association facilities; theaters; community places; religious facilities, provided that the entire building unit is used as one of the aforementioned uses exclusively or overwhelmingly, with one or more other uses occurring as auxiliary and/or complementary use.” 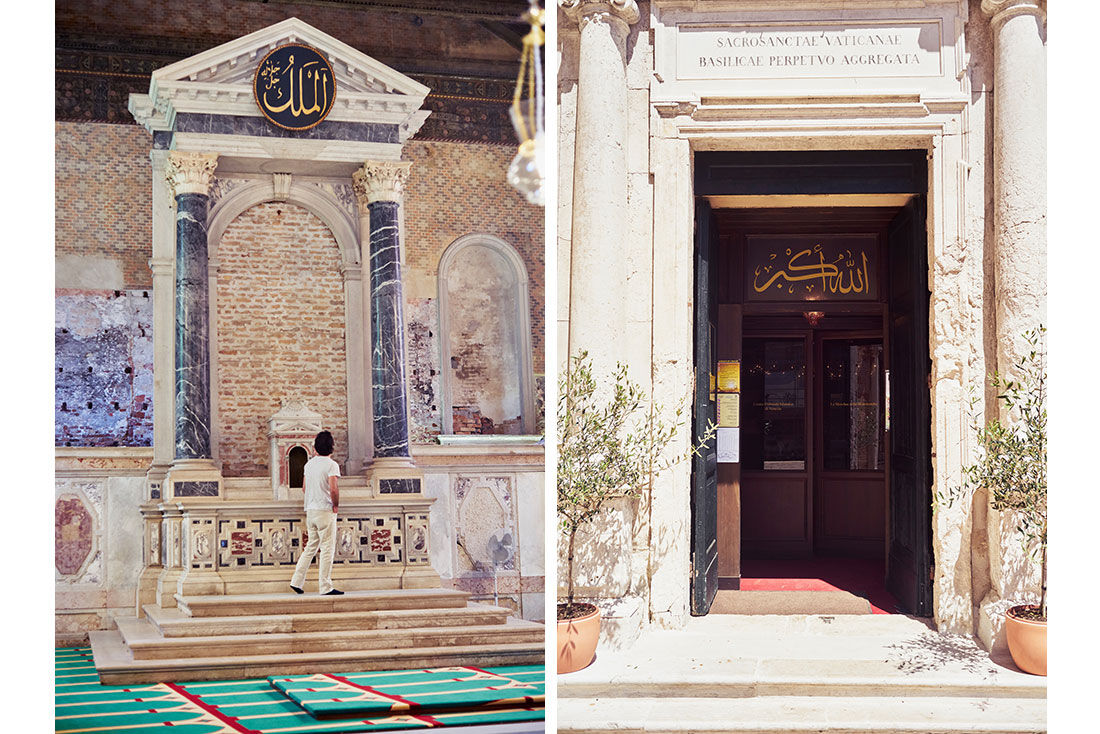 Advertisement
The artwork acts as (or is) a mosque and community center that teaches Koranic texts and cultural lessons in Italian, Arabic, and Icelandic—wherein the 15,000 to 20,000 Muslims living in the greater Veneto area can come together and make connections. Still, the city has deemed the pavilion a security threat, not only for reasons to do with religious extremism—on behalf of both Islamic and anti-Islamic groups, like Lega Nord—but also because of overcrowding. Technically, the space is permitted to host a maximum of 100 people, a number that has been meticulously tracked and has been not exceeded, aside from during exempt inaugural events, according to the president of Venice’s Islamic community, Mohamed Amin Al Ahdab.
Last week, it was announced that “THE MOSQUE” must shut its doors. As the first functional mosque within the city of Venice, the project has been deemed inflammatory from the start, and art critics from Randy Kennedy of the New York Times to Andrew Russeth of ARTnews have defended the controversial pavilion, while Hrag Vartanian of Hyperallergic and Anna Somers Cocks of The Art Newspaper have questioned its aesthetic legitimacy and efficacy. (Places of worship for Muslims exist in the larger Veneto region, but in Venice proper, the only other indication of a mosque’s existence was back in the 17th and 18th centuries.) The Icelandic Art Center, in the same statement issued last Wednesday, declared, “The installation is a work of art, and claims to the contrary are misleading. Opinions about the art are invited and encouraged, and indeed their expression is part and parcel of “THE MOSQUE” project concept. But opinions are not facts.” 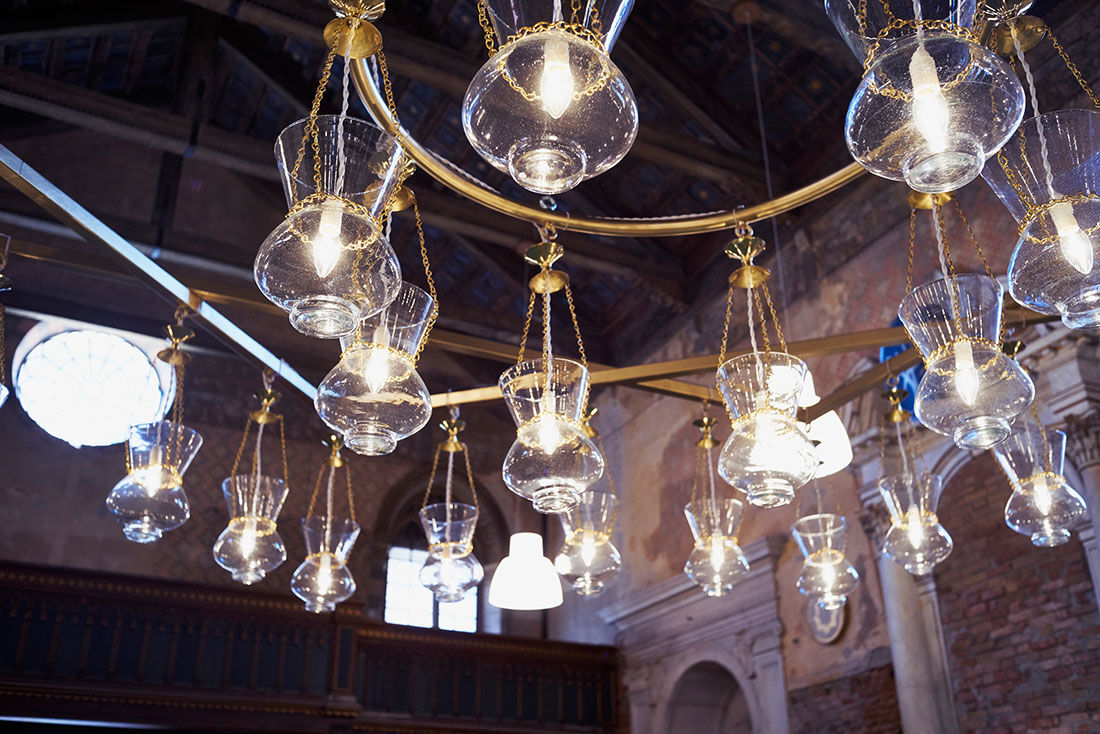 Whenever we’re in a situation like this one, the old “is this art?” debate gets tossed around. Büchel, represented by Hauser & Wirth, has made a career from being part punk, part prankster, part performance artist. In 2011, he famously converted the gallery’s Piccadilly space in London into the Piccadilly Community Centre, confusing viewers and passersby as to the site’s identity, only to return it to the posh gallery weeks later. He, likewise, nearly bankrupted MASS MoCA with an installation that never saw the light of day, and was ultimately taken to court. Büchel is as controversial as his pavilion.
While Vartanian argues that “THE MOSQUE” has not “done much to promote understanding, but it is part of a troubling trend in contemporary art … to create pieces that end up being amateur adventures into the highly specialized field of social work,” Russeth makes the claim that “it felt like a rare, inspiring example of art actually getting something done. But now that is over.” And with Büchel refusing to go on record, and even conveying at the project’s opening (which I attended—full disclosure: I am a personal friend of a few Icelanders who volunteered their time to help set up the installation) that once the operation was up and running, he had no intention of interfering with its day-to-day management. 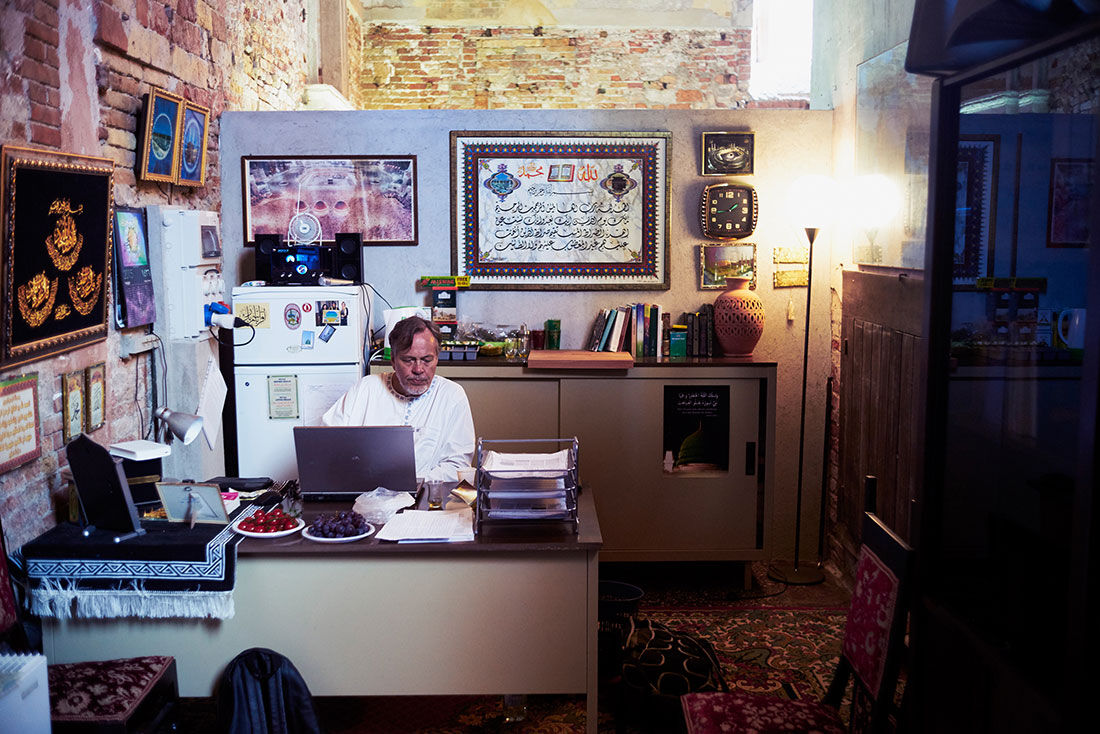 “Leave it to the community,” was the phrase used to explain Büchel’s involvement. One could read that as either the ultimate artistic alchemy or elitist irresponsibility. But, in debates like these, it’s important to remember rule number one of six for constructive criticism, according to John Updike: “Try to understand what the author wished to do, and do not blame him for not achieving what he did not attempt.” In this case, Büchel explicitly cited that his project was one of cataclysm—toss the chemicals into the pot and let them interact. We are in an age where the boundaries and limits of art are not a relevant discussion. (Those limits are beyond stretched.) If for “All the World’s Futures,” Enwezor can commission artists to simply read Karl Marx’s Das Kapital, with no addendums, alterations, or interpretations, then surely Büchel’s pavilion is as much a work of performance art.
It goes without saying that some degree of Islamophobia is present in both the city of Venice’s reaction and the art world’s general complicity. “THE MOSQUE,” even though it was made by an artist of neither Muslim nor Middle Eastern descent, advocates an attitude that can still fall foul of certain populist sensibilities in the West (and particularly among those smitten with resurgent far-right movements in Europe): Muslims are normal people. In fact, if you think about it, the work is sort of boring. It’s the apotheosis of normcore: people going about their daily lives, their daily rituals, and their desires to socialize with others in their self-identified community.
Advertisement 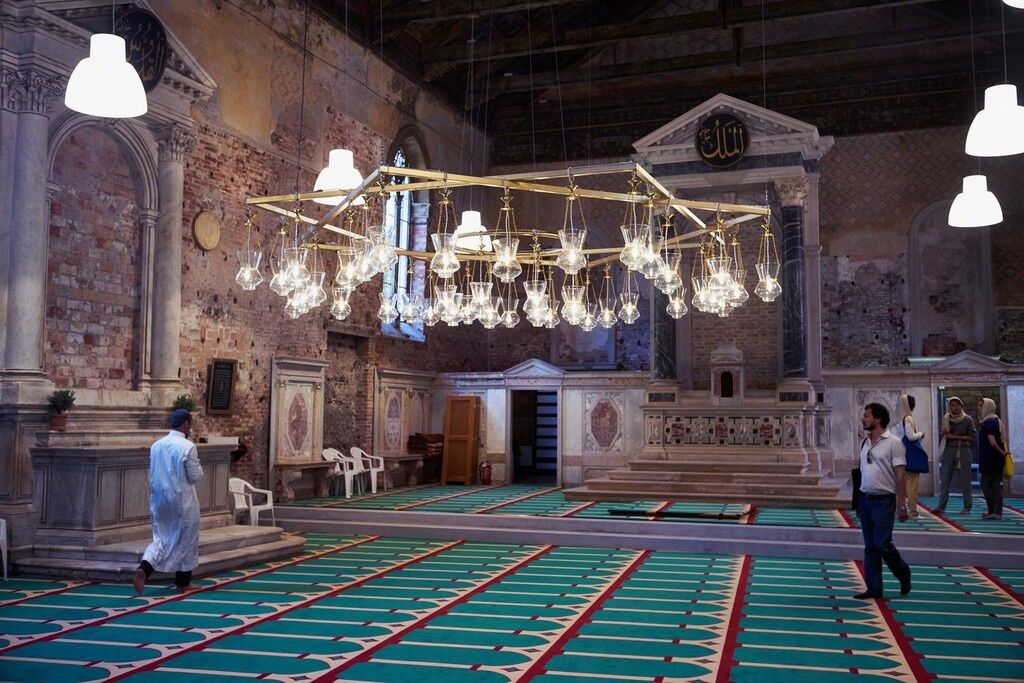 Now think back to Enwezor’s initial premise for the Biennale. Ironically, all that disquiet is actually disarmed in Büchel’s work. It’s actionable and peaceful and mundane. It’s anathema to many of the works in the Arsenale that almost literally and figuratively hit you over the head with violence and destruction (and perhaps suggest that those are the means to political change). Yet Enwezor also folded into his curatorial lens a passage from Walter Benjamin’s Theses on the Philosophy of History, musing on a tiny
Paul Klee
painting that the modernist theorist had purchased, titled Angelus Novus, or the Angel of History. The angel’s “face is turned toward the past,” Benjamin observed. “But a storm is blowing from Paradise; it has got caught in his wings with such violence that the angel can no longer close them.”
Enwezor writes, “Benjamin saw in Klee’s picture what in fact, was not registered nor even painted in it. Instead he read Angelus Novus allegorically, seeing the picture with clear, historical eyes, while facing another catastrophe unfolding in Europe at a time of immense crisis … [W]ith the state of the world he knew being dismantled right before his very own eyes, Benjamin compels us to revision the representational capacity of art.” If Enwezor aches to make a statement with works that “revision the representational capacity of art,” then how can a work which embodies this call to action so profoundly, in its formal, metaphorical, and symbolic properties, be sacrificed on the altar of progressive art-making? Certainly neither all the world nor the future seems to be in consideration here.
Julie Baumgardner
Directed by Poppy de Villeneuve.
Explore the 56th Venice Biennale on Artsy.
Further reading in Art